There are so many beautiful Japanese flowers to enjoy during your trip to Japan! It might be the beginning of spring when cherry blossoms are in bloom, or later in the year when Japanese flower fields display every color of the rainbow. You can’t beat a more beautiful experience than sitting down and admiring nature's splendor.

So when and where can you see beautiful Japanese flowers? Follow along as we introduce what flowers bloom by month, where to find them, and even links to tours you can book.

Flowers of Japan: A special kind of culture

Flowers have a lot of meaning in this lovely country. Ikebana, or flower arranging, is one of the three classical Japanese arts of refinement. At the same time, rather surprisingly, Japan has a long history of tattooing, and Japanese flowers are a popular tattoo.

Meanwhile, there is no doubt that Japan is famous for sakura cherry blossoms, along with the whole concept of hanami (having a picnic and seeing cherry blossoms), so many tourists try to visit Japan to see them.

Clearly, there is something quite special and beautiful about Japanese flowers. It is perhaps an indicator of how deep flowering plants have penetrated the culture that visitors to Japan will try to visit a traditional Japanese garden, perhaps go to a flower park or festival, eat a sakura flavored KitKat or other sweet, and even sakura flavored sake.

Now that you know how important flowers are in Japan, you must be intrigued to know which flowers you can see in which season, but never fear, we have gathered all the information we could get to know exactly when which flowers are blooming! 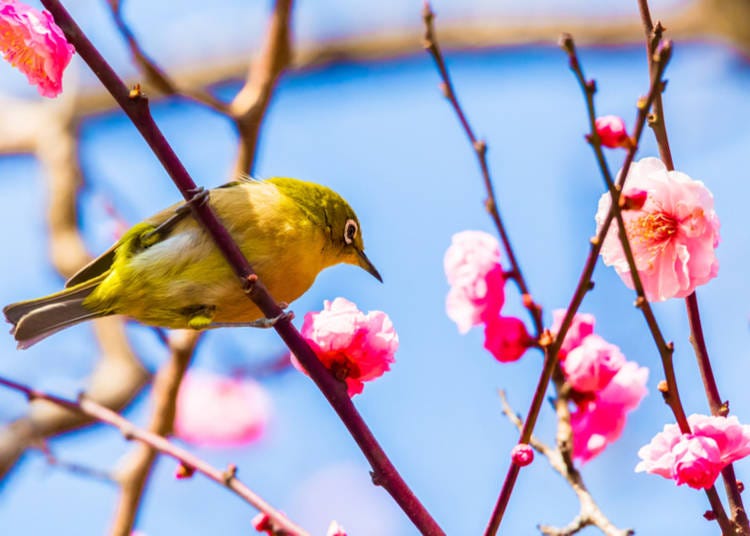 Ume (Plum)
Plum season in Japan: Late February - Early March 2022
The first blossoming flower of spring is not actually cherry blossoms, but ume (plum) blossoms! So when Japanese plum trees start to flower it is a large announcement that spring has arrived, and in many areas of Japan, there are ume festivals where local people admire the flowers. 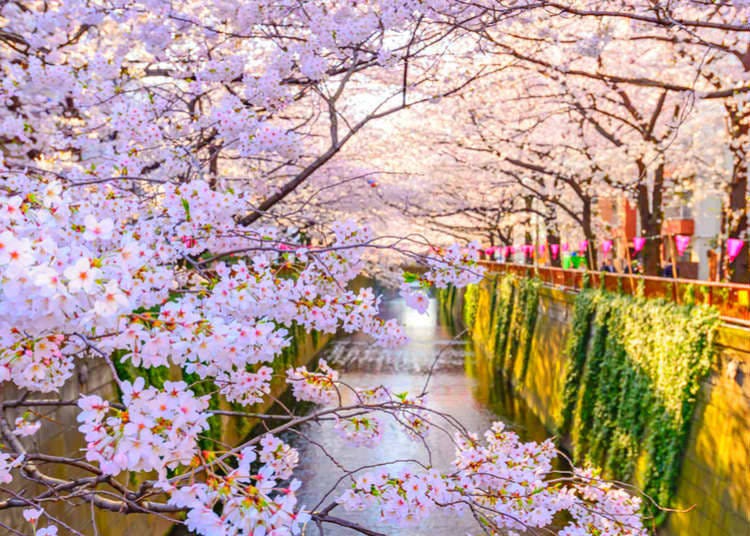 Sakura blossoms along the Meguro River near Nakameguro

Sakura (Japanese Cherry)
Sakura season in Japan: Mid-Late March 2022
Any list of Japanese flowers wouldn’t be complete without mentioning sakura cherry blossoms! This flowering tree has become so famous that the news reports on the blossom forecast across Japan, and people across the whole country find time to enjoy hanami.

There are beautiful locations everywhere, but two good spots include Shinjuku Gyoen and Yoyogi Park – however hanami is very popular so it will be busy! 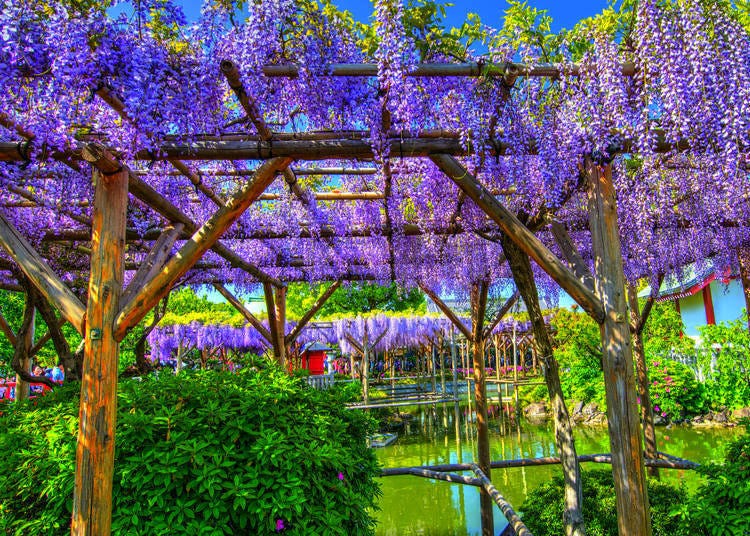 Fuji (Wisteria)
Wisteria season in Japan: Late April - Early May 2022
Wisteria plants produce a tress of flowers up to 50cm long and with upwards of 100 flowers on just one tress. Normally a pale blue color, the Japanese wisteria is enjoyed by gardeners around the world, and in Japan, you can find really stunning displays of wisteria.

Ashikaga Flower Park in Tochigi Prefecture is perhaps one of the best displays and is around 90 minutes from Tokyo, but you can also see a smaller display at Kameido Tenjin Shrine near Kinshicho Station. 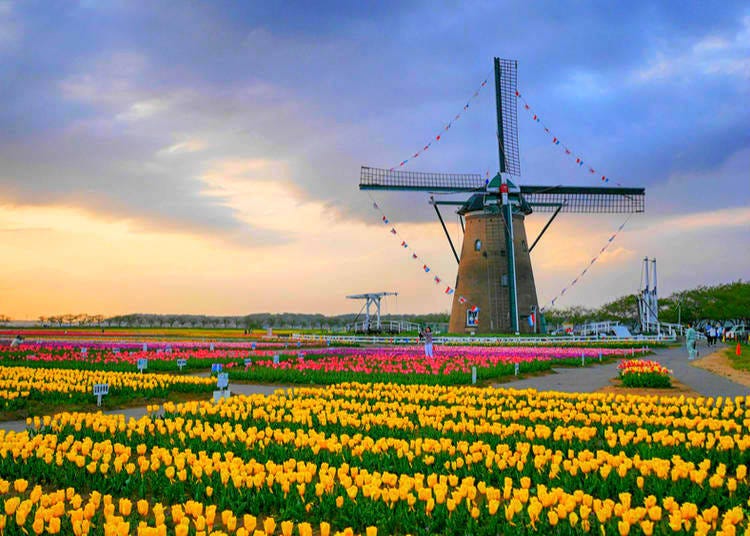 Just like the Netherlands – a tulip field in Chiba

Churippu (Tulips)
Tulip season in Japan: Late April - Early May 2022
Beautiful tulip fields are normally associated with the Netherlands, but in Japan, too, you can see some exceptional tulip vistas. As a romantic flower, it is certainly one to take a date to see!
Tonami Tulip Park in Toyama Prefecture is perhaps the most famous place in Japan to see tulips as there are two million of them! However, as it is around 8 hours from Tokyo, if you want somewhere closer to Tokyo, get the JR TOKYO Wide Pass or the Greater Tokyo Pass and go to Sakura Furusato Hiroba in Chiba Prefecture. 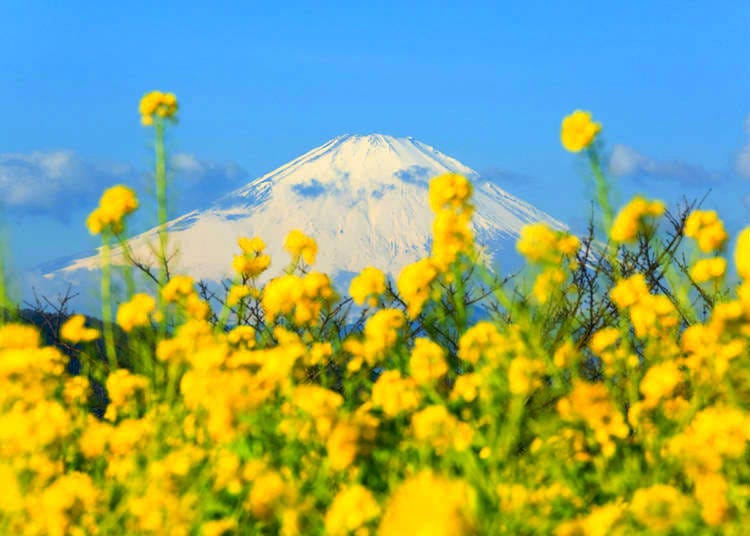 Not quite as tall as Mt. Fuji – a rape blossom field

Rapeseed (Nanohana)
Rapeseed season in Japan: Mid March - Early April 2022
March is the best time for seeing rapeseed blossom, a flowering plant with a long history in Japan – it was mentioned as a food source over two thousand years ago. It is perhaps the oil from rapeseed that lit up Edo (Tokyo) not too long ago! It is normally in full bloom by the end of March.
Around Tokyo, Japanese flower lovers will tend to take the Kominato Railway/Isumi Railway line from Goi to Ohara in Chiba, which winds its way around the countryside - through gorgeous canola fields and past lines of scenic Japanese cherry blossoms.

A rather surprising place to see a yellow carpet of rape blossoms in Tokyo is near Shimbashi Station, in Hamarikyu Gardens, where tens of thousands of plants can be seen. 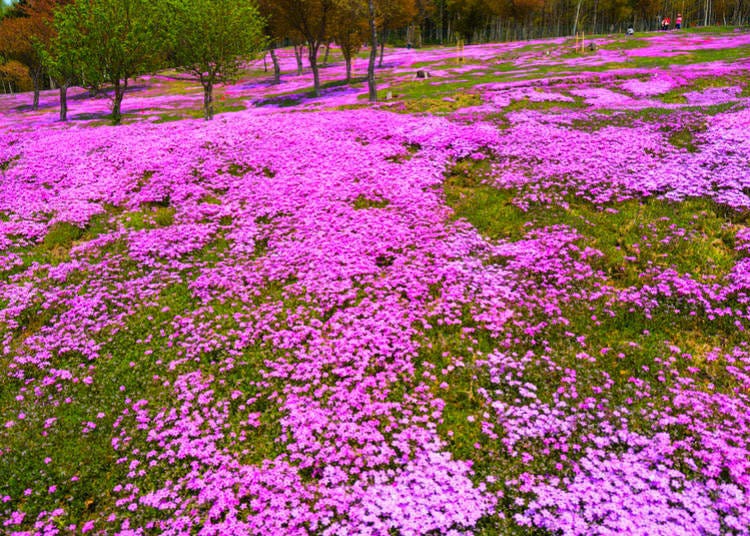 A pink carpet of creeping phlox

Shibazakura (Creeping Phlox)
Season in Japan: April - May 2022
Creeping Phlox blooms from April to May and provides a charming vista of pink! Native to America, this plant grows close to the ground and can be seen in
Hitsujiyama Park in Saitama Prefecture, or for a really iconic photo, try going to Fuji Shibazakura Festival where 800,000 creeping phlox plants bloom with Mt. Fuji in the background. 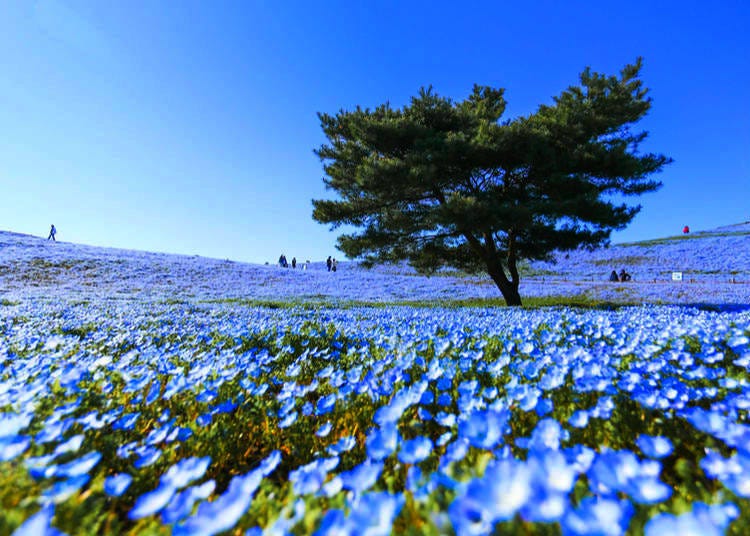 Nemofira (Nemophila)
Nemophila season in Japan: Mid-April - early May 2022
This is another low-growing plant that blooms from April to May, the color of which is associated with baby blue – which turns whole fields blue! These can be seen in Showa Memorial Park in Tokyo (Tachikawa Station), or for the awesome sight of over 4 million blooming nemophila flowers, check out Hitachi Seaside Park in Ibaraki Prefecture (2 hours from Ueno Station). 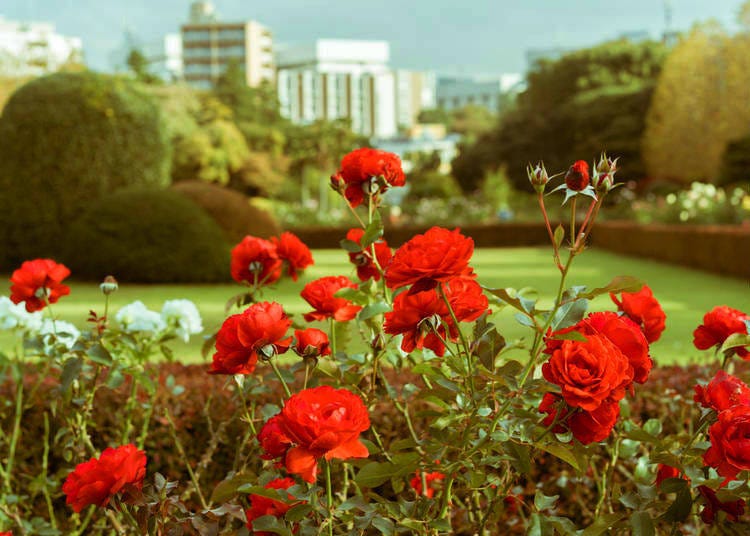 Bara (Roses)
Rose season in Japan: Early-Mid May 2022
The rose plant found itself in Japan fairly recently, it was introduced by Europeans, as such many rose bushes today are descended from European rose plants, and bloom through summer into autumn. They are fairly easy to find wherever you go, but check out the 500 different varieties of rose plants in Hibiya Park, Tokyo (Hibiya Station), or the French Garden in Shinjuku Gyoen National Garden. 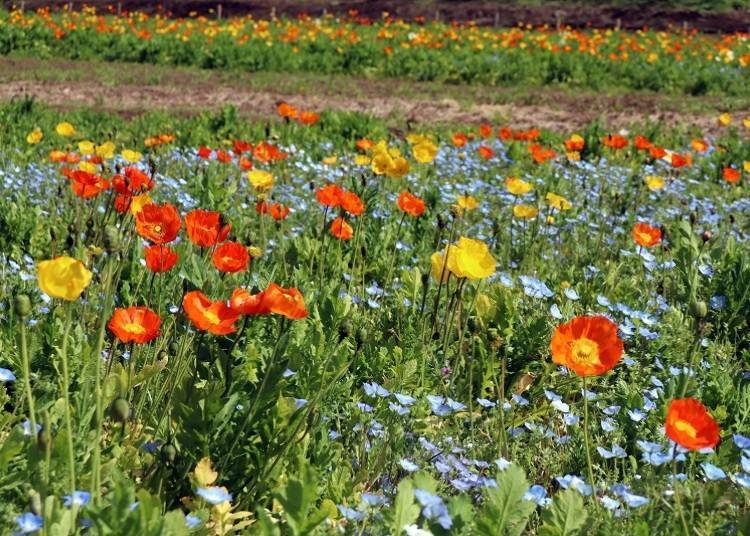 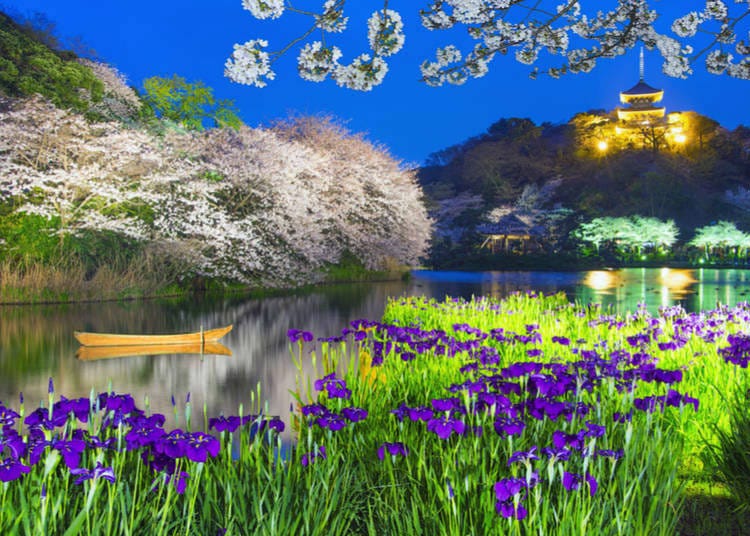 Hanashobu (Japanese Iris)
Iris season in Japan: May-July 2022
The iris plant was introduced to Japan centuries ago, and since then this delicate flower has bloomed every summer to create a very charming vista. They can be seen from May to July, but in Tokyo, you can catch the Katsushika Shobu Matsuri, or Iris Festival, in Horikiri Shobuen (Horikirishobuen Station). 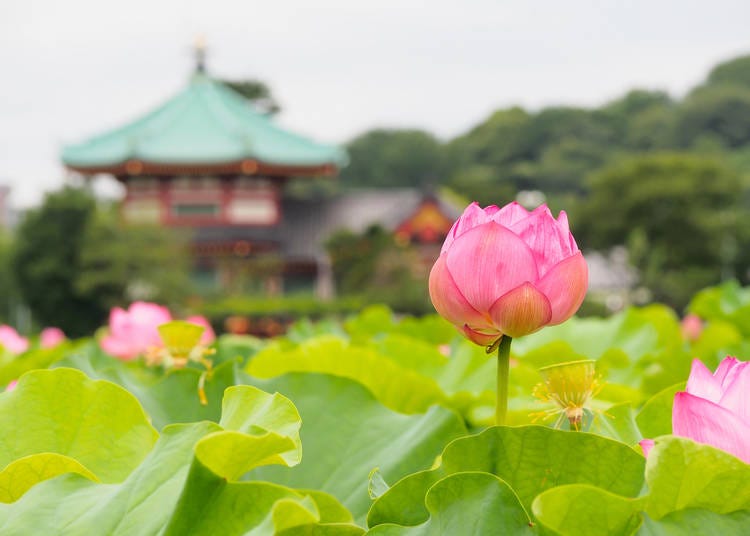 Lotus are an exceptionally gorgeous and fragrant flower

Hasu (Lotus)
Lotus season in Japan: Mid-July - Mid-August 2022
Lotus is an exceptionally gorgeous and fragrant flower, with petals of pink, red or white. A symbol of enlightenment, the lotus can be found in summer at many ponds near temples and shrines. Some famous places for lotus include Ueno Park in Tokyo (Shinobazu Pond), where they are particularly plentiful; in Kamakura, Tsurugaoka Hachimangu Shrine is quite popular for the flower; while in Yokohama, Sankei-en Garden has a lovely lotus patch. 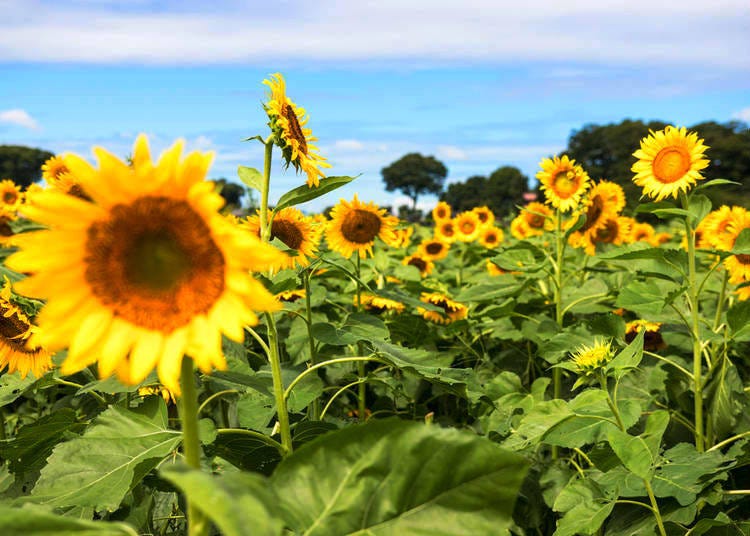 Sunflower field during the Kiyose Sunflower Festival in Tokyo

Himawari (Sunflowers)
Sunflower season in Japan: July-August 2022
From July to August the world famous sunflower blooms, these tall plants with large yellow flowers are so popular that sunflower festivals are held. But, who can blame people – a field of sunflowers is really pretty! Some recommended locations include Akeno Himawari Batake (Akeno Sunflower Field), Yamanashi Prefecture, Kiyose Sunflower Festival in Tokyo (Kiyose Station), and at Sakura Furusato Hiroba in Chiba Prefecture. 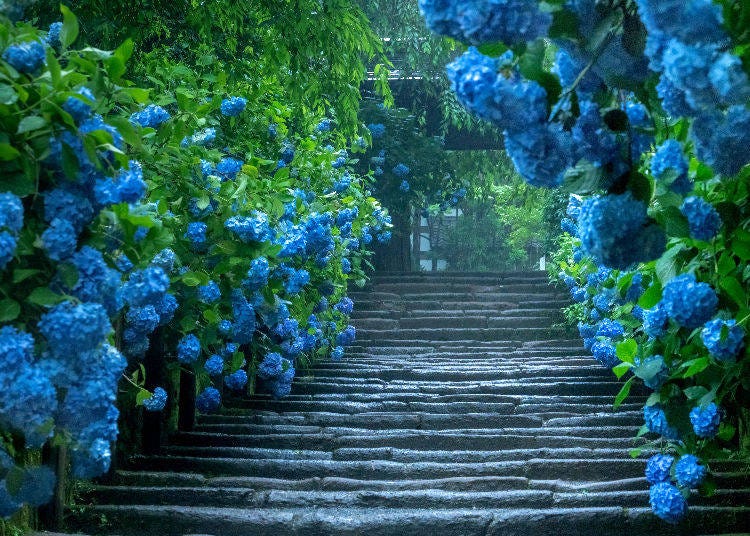 Ajisai (Hydrangea)
Hydrangea season in Japan: Mid June - Mid July 2022
This plant is associated with the rainy season in Japan, so if you see it, then it might be raining or about to rain. The best time to see them is from mid-June to mid-July, there are many varieties of this plant native to Japan, but one, in particular, is noteworthy as its leaves are brewed to make a sweet tea (Hydrangea serrata).
Hydrangea festivals are normally held during June and July, while Hakusan Jinja Shrine or Asukayama Park in Tokyo are good places to see a lovely display of hydrangeas. Alternatively, head down to Hase Temple in Kamakura to catch a beautiful display of over 30 types of hydrangea. 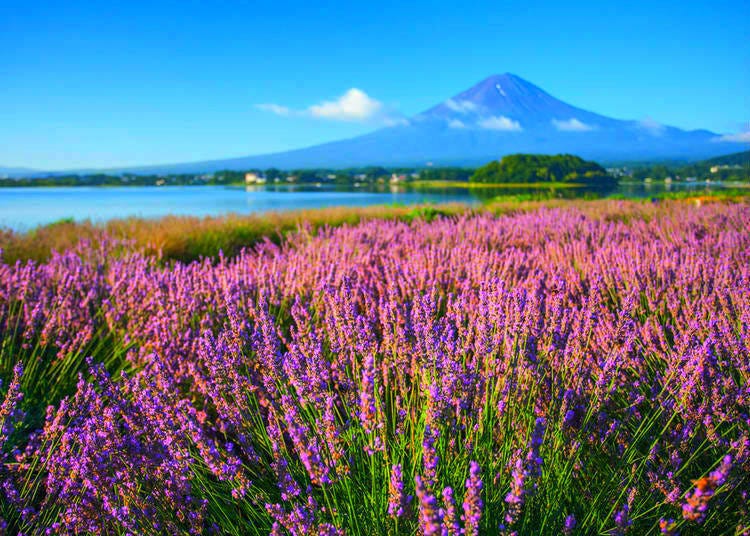 Lavender on the shoreline of Lake Kawaguchiko

Rabenda (Lavender)
Lavender season in Japan: Early July - Early August 2022
Lavender fields are simply gorgeous in Japan, and are famous for rivaling France in beautiful and scale. They bloom from early July to early August, and are particularly famous in Hokkaido where you can see vast lavender fields, such as Farm Tomita in Furano. Closer to Tokyo, you can find lavender fields in Tambara Lavender Park, Gunma Prefecture and Lake Kawaguchiko, Yamanashi Prefecture. 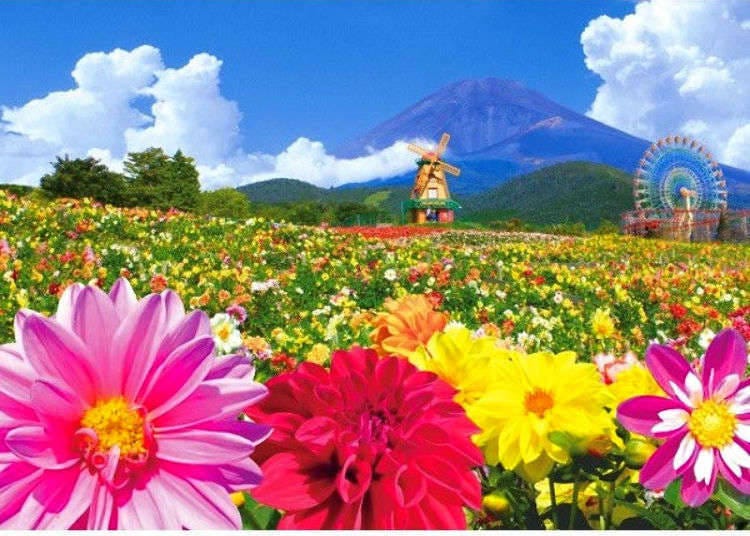 Flowers that bloom in Autumn 2022 in Japan 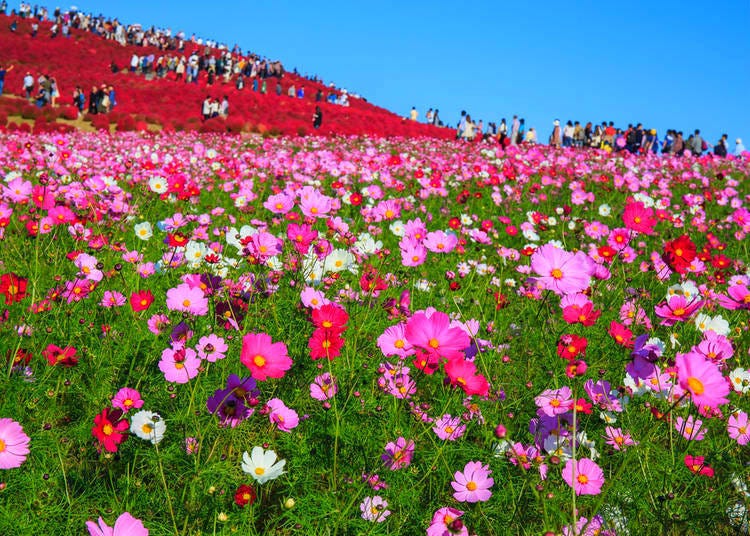 Kosumosu (Cosmos)
Cosmos season in Japan: Late August - Early October
Just as we can think of plum and cherry blossoms heralding the start of spring, so do the multicolored cosmos flowers indicate the start of autumn. They appear across Japan as they are relatively easy to grow and come in different colors; one field may appear like gold while another pink. You are also spoilt for choice in seeing these, cosmos flowers can be seen near Mt. Fuji at Hana no Miyako Koen (Lake Yamanaka), Sakura Furusato Hiroba in Chiba Prefecture, and Showa Memorial Park in Tokyo (Tachikawa Station). They may be seen at Kurihama Flower World (Kurihama Station) south of Tokyo. 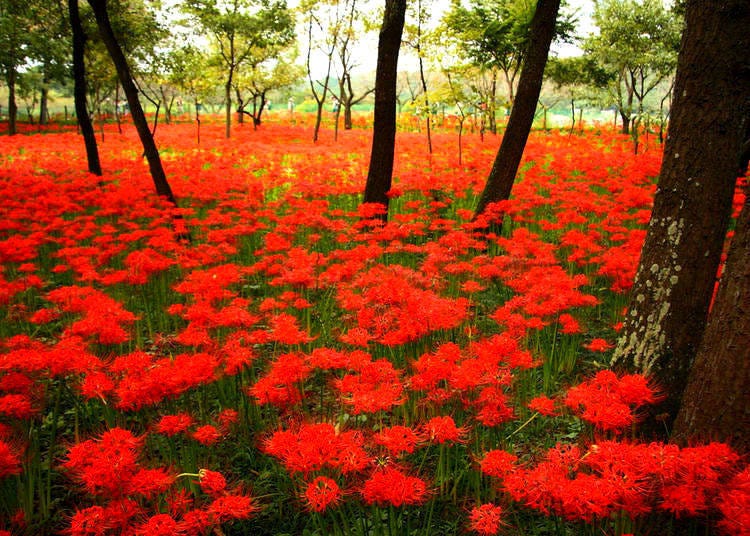 Manjushage (Spider lily)
Spider lily season in Japan: Late September - Early October 2022
As the name might indicate, this flower does look a bit like a big spider – but don’t worry it won’t bite. It is an unusual, but pretty flower, and it is a welcome sight to see in autumn. Just an hour away from Tokyo you can see over a million of them at the spider lily festival held in Kinchakuda Park, Saitama Prefecture (Koma Station). 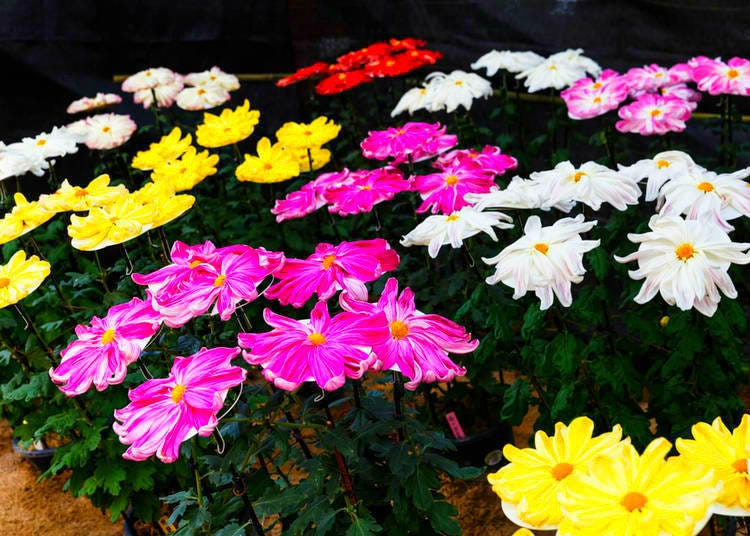 Kiku (Chrysanthemum)
Chrysanthemum season in Japan: September - Mid November 2022
The Chrysanthemum flower is beautiful, so beautiful that people love to get Japanese flower tattoos of this flower. This special flower is also the Imperial Family Emblem and is also frequently used for government or shrine seals. It is, in fact, on the front of the Japanese passport too! It normally starts blooming in September; one good location to see them is Shinjuku Gyoen Kikkadan-ten. 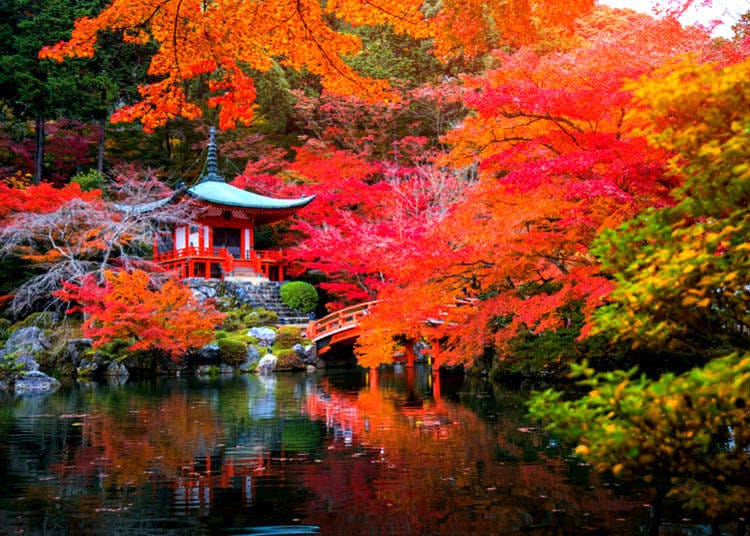 Koyo (Autumn foliage)
This isn’t a flower, but during the autumn visitors to Japan are given a real treat as the leaves turn different shades of red and yellow, it creates a really beautiful sight. They can be seen in cities and the countryside, basically anywhere there are trees!

These flowers bloom in Winter 2022 in Japan 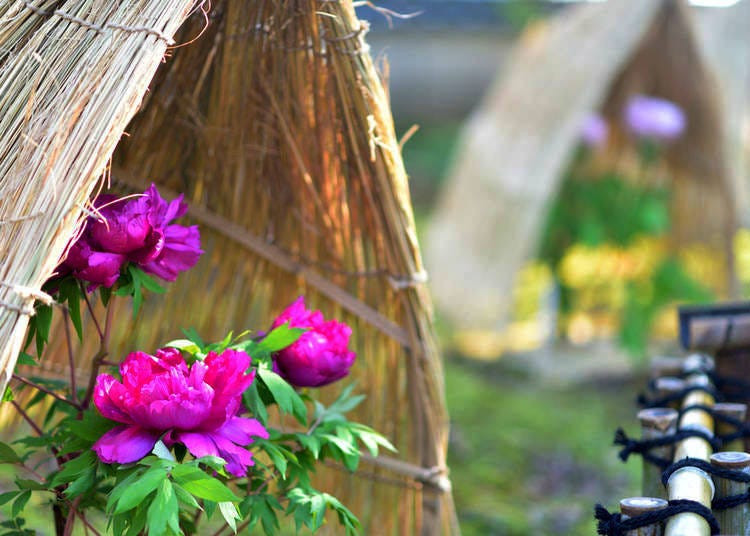 Kan-Botan (Winter Peonies)
Peony season in Japan: Late November - Mid February 2022
Winter is not really the time of year when we would even dream of seeing blooming flowers, but even in the depths of winter, you can be surprised by the sight of large colorful flowers. Winter peonies bloom from November to January, and in areas where snow is expected, they are often protected with straw covers. Check out Hamarikyu Gardens in Tokyo (Shimbashi Station) or Toshogu Shrine in Ueno Park (Ueno Station) to catch the surprising sight of beautiful flowers in winter! 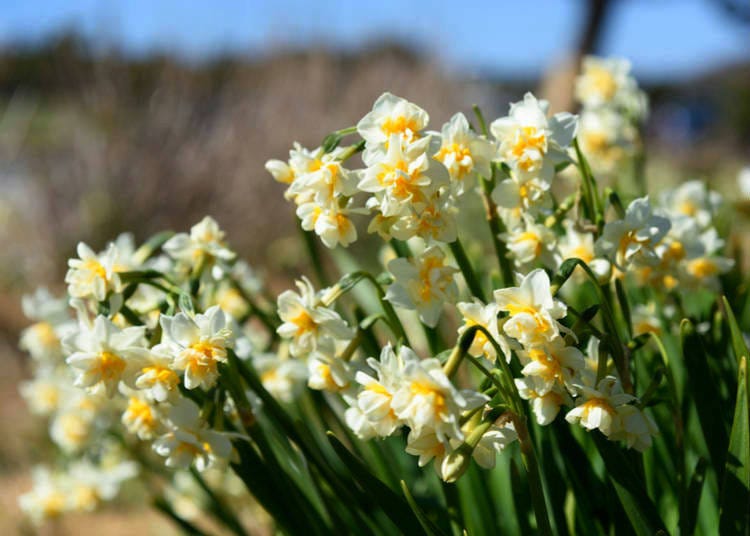 Daffodil flowers blooming in the depths of Japan’s winter

Suisen (Japanese Daffodils)
Daffodil season in Japan: December - January 2022
From December to January, you might also catch a glimpse of flowering daffodil plants! In Jogashima Park, about an hour south of Tokyo, half a million of these plants bloom in the middle of winter.

Japan's Newest Starbucks Opens Inside a Blooming Greenhouse (We Have Photos!)
Shiga Blumen Hugel Farm: Gorgeous Flowers in Japan, Food and More at Shiga Agricultural Park!
Top 9 Summer Spots For Gorgeous Hokkaido Flowers (Best Between June and August)
What Kind of Flowers Grow in Hokkaido and When are the Best Times to See Them?
Inside 6 Popular Tokyo Flower Markets: Morning Glory Fairs and Chinese Lantern Plant Markets