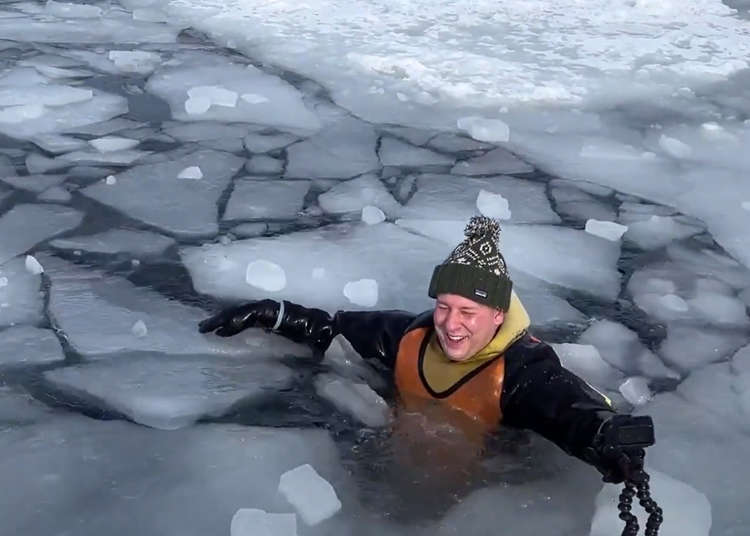 Found in eastern Hokkaido, about two hours away from Narita Airport, Memanbetsu Airport is the perfect gateway to the Shiretoko Peninsula, a World Natural Heritage. This area has many attractive spots that can deliver fulfilling natural and cultural experiences unique to Hokkaido. This article will introduce some of our favorite sightseeing spots near Memanbetsu Airport.

1. Shiretoko Peninsula and the wintry spectacle of drift ice 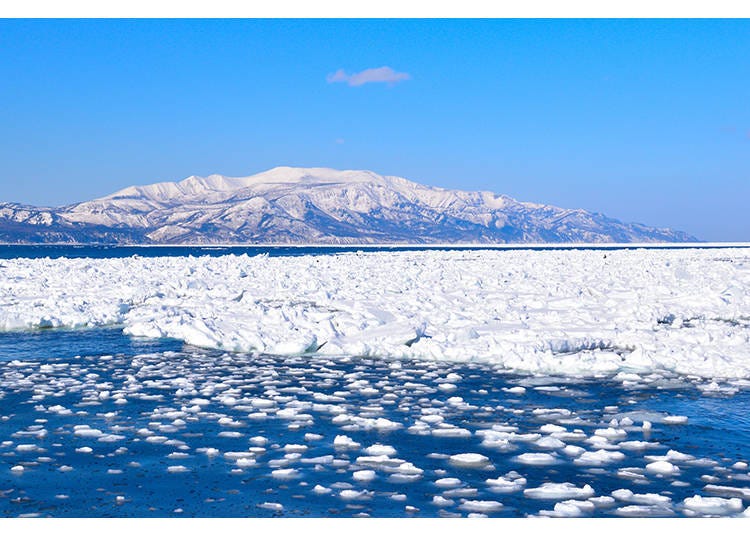 Shiretoko was designated a UNESCO World Natural Heritage in 2005. The Shiretoko Peninsula pushes into the Sea of Okhotsk. In winter, people come from all over to see the drift ice. Hokkaido is the only place in Japan where drift ice can be seen. Thanks to the way the Shiretoko Peninsula juts out, it blocks the drift ice in such a way as to cause floes to bunch up, making for its famous winter scenery. The white ice covering the blue water is a breathtaking sight: truly, a work of art by nature. One way to enjoy it is to board the Abashiri Drift Ice Sightseeing & Icebreaker Ship Aurora, which leaves from Abashiri Port, and enjoy a brief cruise through the ice. The ship provides sightseeing tours in summer, too. 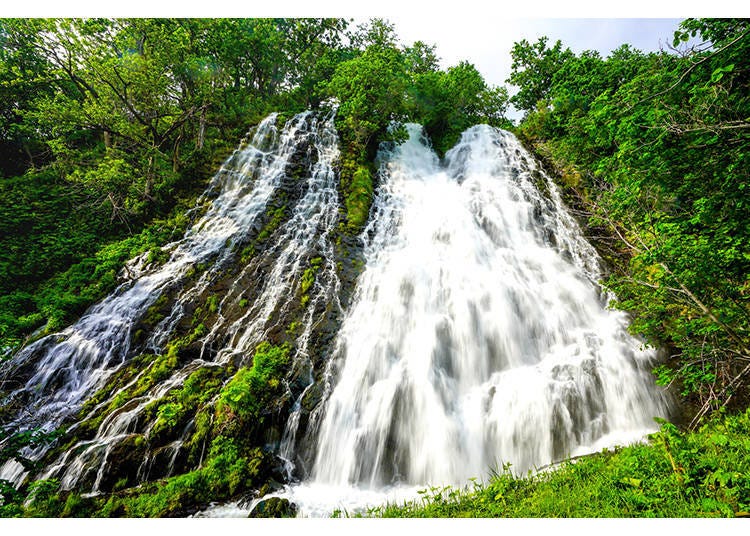 Oshinkoshin Falls is famous as Shiretoko’s largest waterfall. Its waters tumble down an 80-meter slope 30 meters wide, breaking into two streams on the way down. From this, some people also call it the “twin beauty waterfall,” and it earned a place in Japan’s Top 100 Waterfalls. Part of what makes it so appealing is how each season brings out a different expression in the waterfall: for instance, springtime snowmelt feeds the waterfall for an exciting rush, while in winter, the entire waterfall is blanketed in snow and ice. There’s an observation deck above the waterfall that also has a view of the Sea of Okhotsk and Shiretoko mountains.

3. Surround yourself with natural landscapes at Bihoro Pass 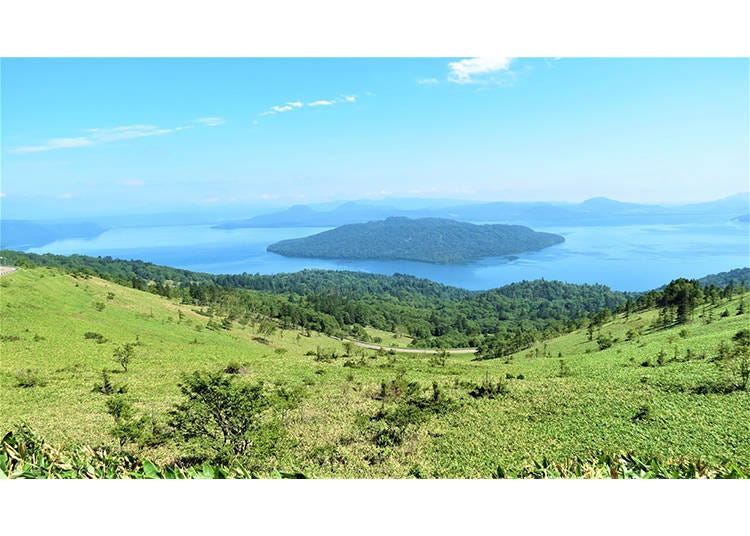 Bihoro Pass is a mountain pass 525 meters up that provides incredible views of Shiretoko. This area is within Akan Mashu National Park, and from Bihoro Pass Observatory, you can see Japan’s largest caldera lake, Lake Kussharo, in addition to Mount Io and Shiretoko’s other impressive mountains on a clear day. Some believe its natural landscapes to be the best in all of Japan. With some luck, you might also see the famous ‘unkai’ – a phenomenon in which the area fills with a sea of clouds – at dawn, or the glittering diamond-studded sky at night. At the peak of the pass is the popular Bihoro-toge Roadside Rest Area, a well-equipped facility with educational videos and exhibits, a dining hall, and a rest space. 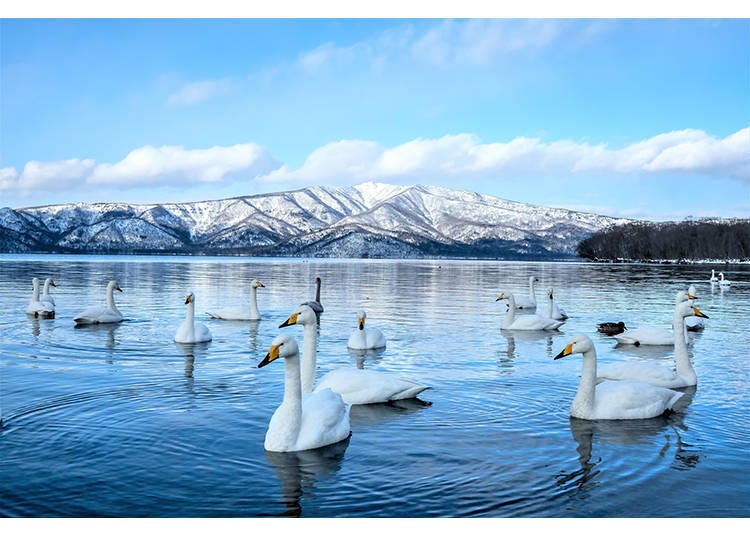 A caldera lake is a lake that forms in the crater left after the eruption of a mountain, and Kussharo is Japan’s greatest. In particular, of Japan’s lakes that freeze over in winter, Kussharo is the widest. It’s beautiful in every season, but the autumn foliage is particularly lovely. It’s also famous for hosting swans that migrate from Siberia each year between November and April, and for as a Hokkaido hot spring destination, accessible to all that visit the lakeshore area.

5. Lake Mashu: One of the world’s clearest lakes 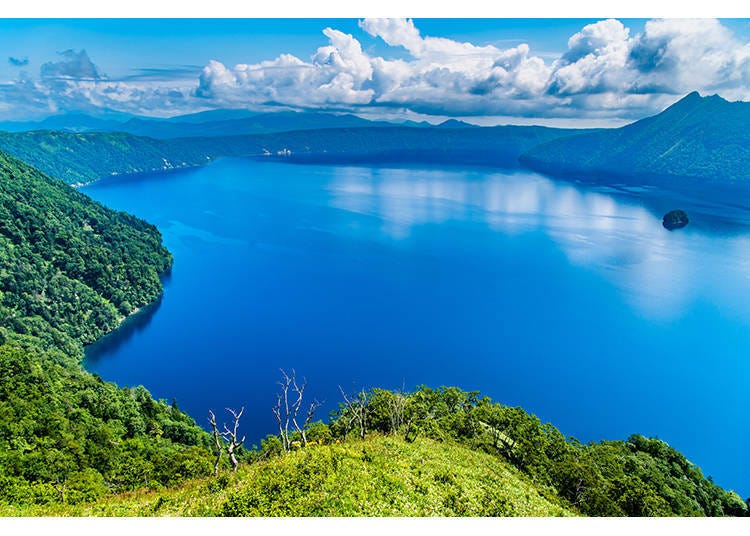 Lake Mashu is another caldera lake, which has the distinction of being one the world’s most transparent. The Michelin Green Guide Japan, a French guidebook, gives it the highest rating of three stars. As there are no rivers connecting to the lake, it sees no inflow of organic matter or runoff, and maintains a constant water level. The still and vast blue this produces is known in Japan as “Masshu Blue.” Lake Mashu is also known for impressive mists, so people crowd the lake on clear days to see its fleeting and beautiful blue surface. 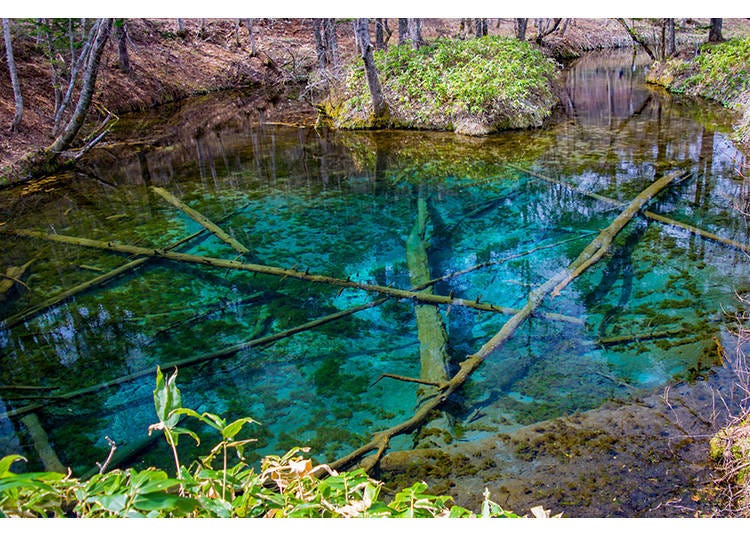 Lake Mashu is also known as “Kaminoko,” or a lake of the gods. This pond, found in the mountains near Lake Mashu, was named out of a belief that it was formed by underground channels flowing from Lake Mashu. Depending on the weather, its surface will glisten with iridescent and fantastical blue hues, drawing many photographers. The pond has a 220-meter circumference and is 5 meters deep, formed by 12,000 tons of water that bubble up from underground every day. Its waters are very clear and cold year-round, which prevents trees that fall into the pond from rotting. The trees are like stacked fossils, and breathtakingly beautiful to behold. 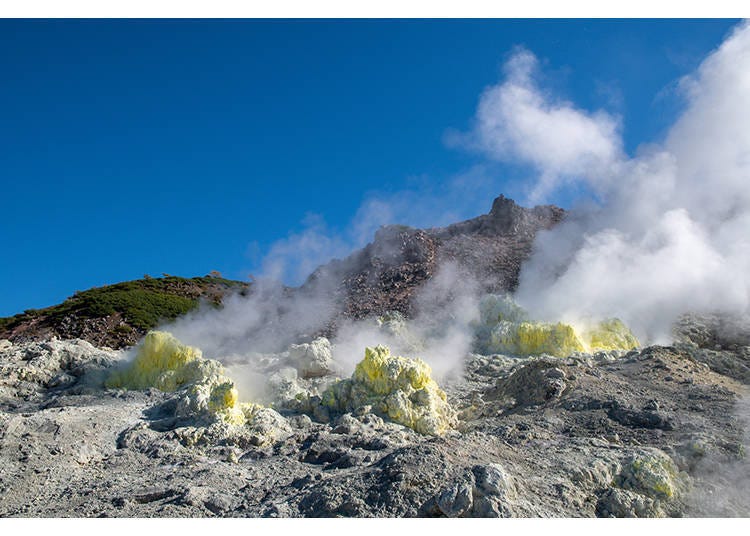 Mount Io is also in Akan Mashu National Park, between Mashu and Kussharo Lake. Literally named “Sulfer Mountain,” it’s a famous sightseeing destination for its past as a mountain mined for sulfur, and as an active volcano. It’s also the source of the nearby Kawayu Onsen hot spring. The mountain’s official name is Atosanupuri, an Ainu name that means “naked mountain.” Even today, gas erupts from its barren rock face, steeping the surroundings in the scent of sulfur. The unique scenery looks almost like something from another planet, and serves as a reminder of what goes on far beneath our feet. 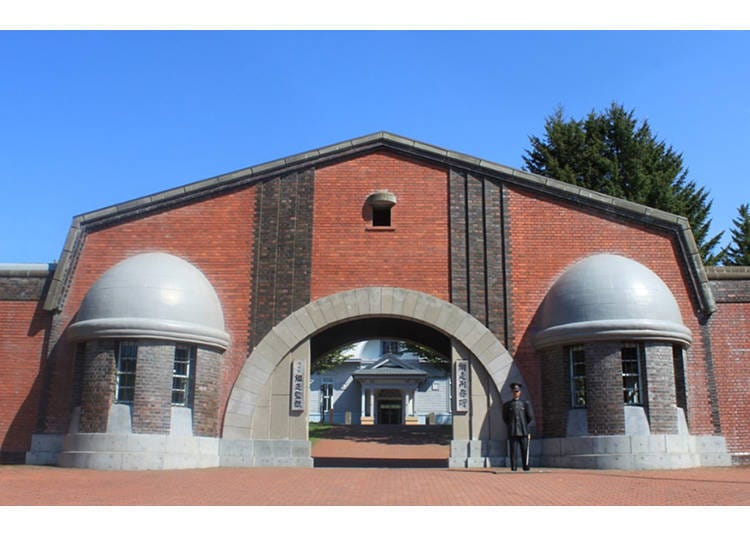 Abashiri Prison was once said to be at the “ends of the earth.” This museum is unique in Japan as its preserves and exhibits the original buildings to the public. Eight of these buildings are designated as Important Cultural Assets, having been judged as architecturally valuable. Visitors will find many things to see and do, including realistic recreations and a “prison experience theater” in which people can feel the lives of inmates at the time. A popular activity is to head to the dining hall, where you can try a meal similar to that served at the current Abashiri Prison.

9. Learn about northern life and culture at the Hokkaido Museum of Northern Peoples 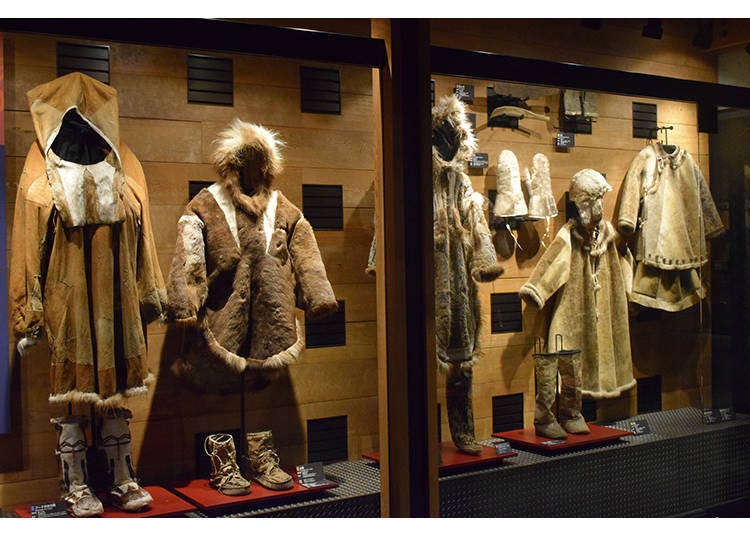 The Hokkaido Museum of Northern Peoples is a facility dedicated to researching and sharing the culture and history of people that live in northern regions. This, of course, includes the Hokkaido’s native Ainu people, but also cultures like the Inuit of Greenland and Sami of Scandinavia. You’ll be amazed by the comprehensive exhibits of both the tools and clothing Northern Peoples need to survive in cold environments, their religious items, crafts, and even psychology. We recommend checking out their gift shop, which has many souvenirs not available anywhere else.

10. Get your fill of drift ice at Okhotsk Ryu-hyo Museum 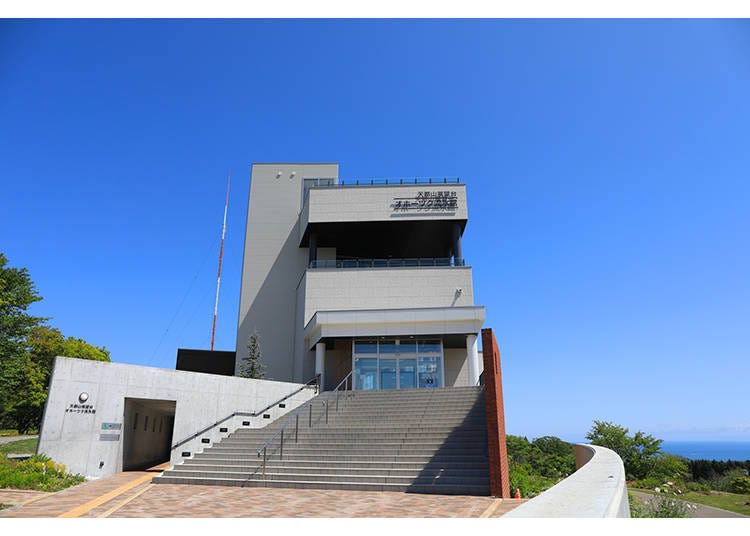 The Okhotsk Ryu-hyo Museum is a facility where you can learn about the drift ice and the creatures of the Sea of Okhotsk. They have one of Hokkaido’s greatest projection mapping setups, an exhibit dedicated to clione (a tiny type of floating sea slug also known as “sea angels”), 4K footage of drift ice, an exhibit that lets you touch recreations of drift ice in a room chilled to -15℃. One more point of interest is their Mount Tento observation deck, which overlooks the Shiretoko Peninsula and the Sea of Okhotsk. You can look out at the incredible scenery in all directions, an experience not to be missed.

The Memanbetsu area and eastern Hokkaido are rich in delights like magnificent scenes of nature for all seasons, particularly winter, and the culture that prospered amongst it. There’s no doubt you’ll find experiences unlike anywhere else and make lasting memories. We hope you’ll use Memanbetsu Airport as your gateway to each of these sightseeing spots.

Get There via Narita Airport! Recommended Sightseeing Spots All Around Japan
Narita International Airport homepage
SHINRA Shiretoko Nature Tour
Peach Aviation
*This information is from the time of this article's publication.
*Prices and options mentioned are subject to change.
*Unless stated otherwise, all prices include tax.