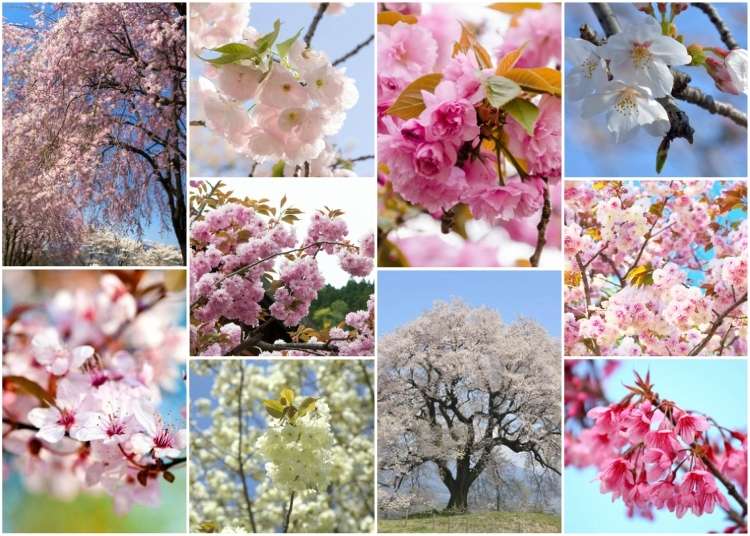 In Japan, 'sakura' does not refer to a single type of flower, but rather, several types of Japanese cherry blossom trees!

While all cherry blossoms share some common traits, there are some striking differences found within the Japanese cherry tree flower (sakura) family. Take a closer look and you'll find variation in color, shape, size, and more. While most Japanese sakura blossoms are a shade of pale pink, they can be white, dark pink, or even yellow!

In fact, Japan is home to over 200 varieties of Japanese cherry trees, including wild and cultivated types. Here are some of the most common varieties of sakura blossoms in Japan - see if you can spot them in the wild.
Read on as we share more about these fascinating sakura flowers! 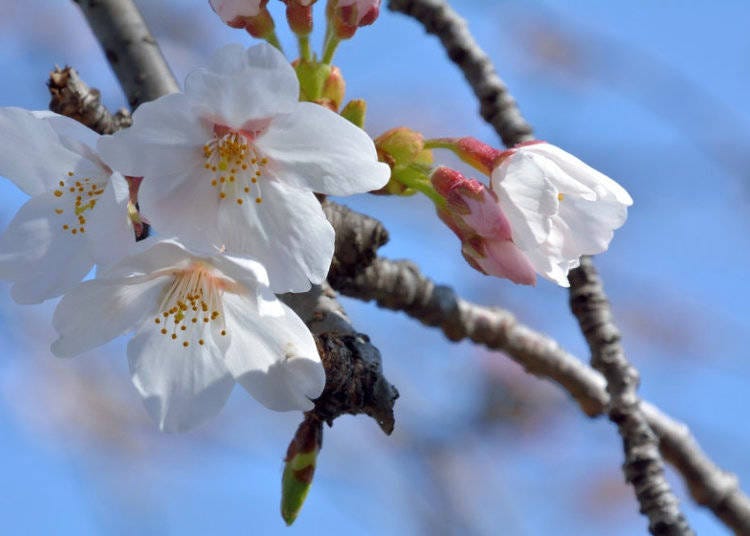 This is the most commonly cultivated variety of sakura. They can be seen throughout Japan, first blooming in late March in Kyushu and Shikoku, continuing with blooms that can be seen in late April in Tokyo, and as late as May in northern areas such as Aomori.

A single-flowering variety, each blossom consists of just five petals. The color is such a pale pink, that the flowers nearly appear to be white. Blossoms are clustered in bunches, which open before the tree's leaves. 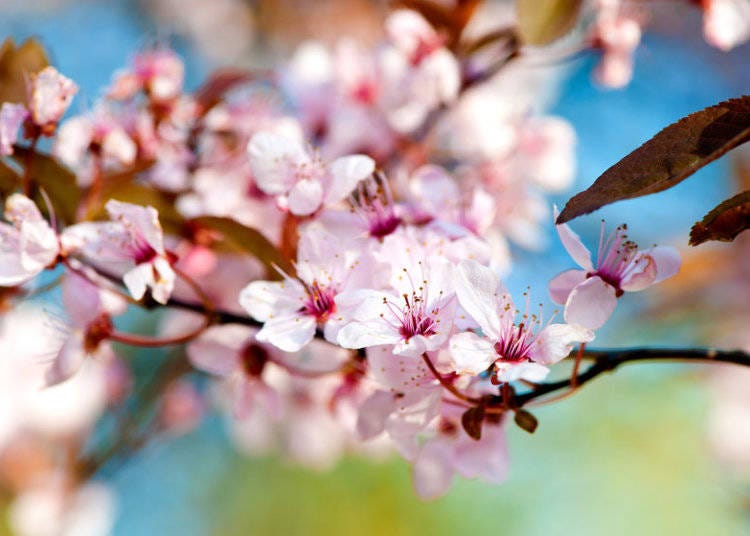 When you think of wild sakura flowers, Yamazakura should come to mind!

Yamazakura takes the top spot among the most commonly viewed wild sakura flowers. These sakura, also known as Hill Cherry, can often be spotted among Japan's mountains. Like the Yoshino, these sakura blossoms also appear in light pink petals of five.

When do Yamazakura cherry blossoms bloom in Tokyo?
One distinguishing feature of the Yamazakura is that its blossoms typically open at the same time as the tree's leaves, between March and April in the Kanto area. 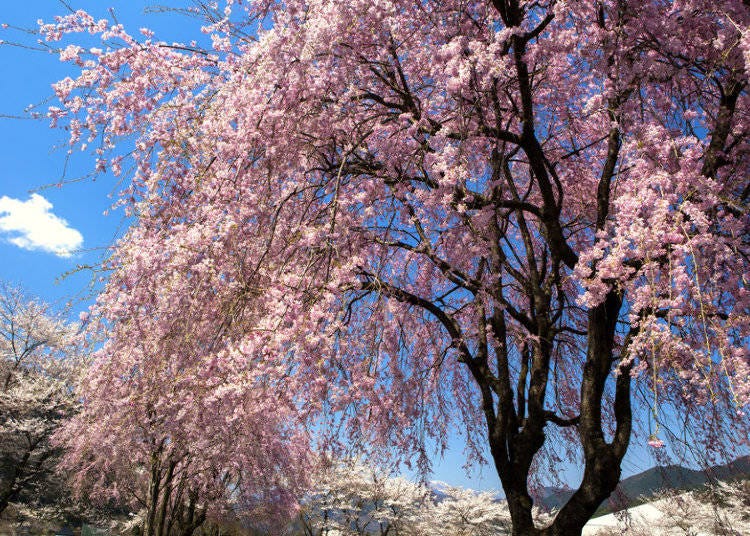 The English name for this variety is the Japanese Weeping Cherry tree, and it is easy to see why. The blossoms on the tree's characteristic drooping branches are the official flower of Kyoto Prefecture.

These sakura blossoms bloom fairly early in the season, about a week before the Somei Yoshino. The most famous Shidarezakura is the Miharu Takizakura (Miharu Waterfall Cherry Tree) in Fukushima. This Japanese cherry tree, which has grown for over 1,000 years, is one of the five great cherry trees of Japan! 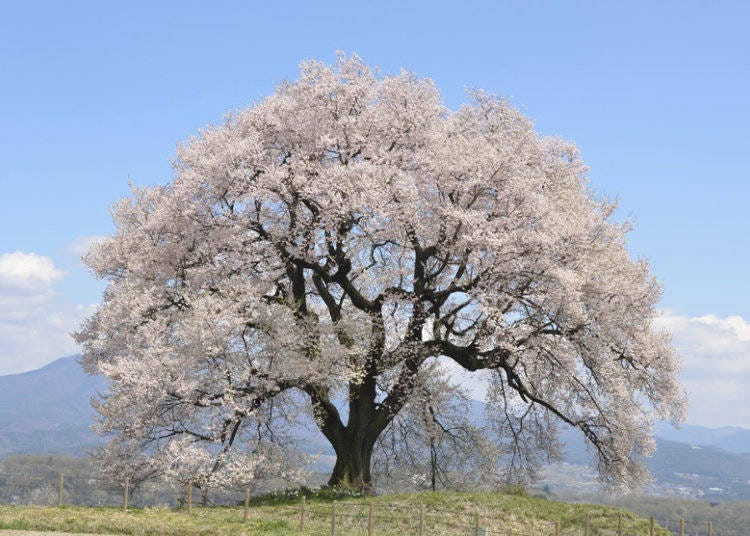 If you arrive in Japan before cherry blossom season officially begins, you might catch a glimpse of Edohigan sakura flowers in bloom!

Edohigan are among the earliest blooming sakura. The name derives from its blossoming coinciding with Western Japan's spring equinox, called higan. The small flower's petals are pale pink, and can be distinguished by a round, swollen calyx.

Japan's oldest known tree, the 2,000 year old Yamataka Jindai Sakura is an Edohigan: you can see it blossom in Yamanashi sometime between early to mid-April. 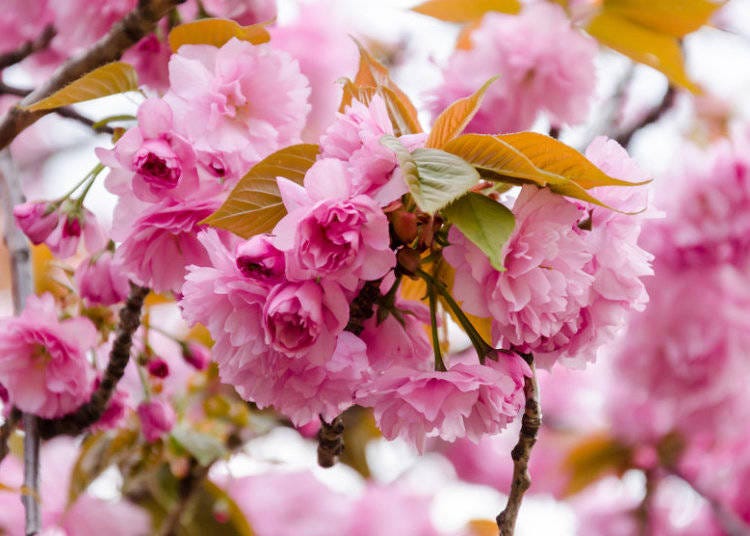 Kanzan flowers fall under the classification of Yaezakura, or "double blossom" sakura, which includes any sakura flower with more than five petals per blossom.

Kanzan are especially spectacular, showing as many as 50 petals per blossom. These hearty, late-blooming flowers are easily recognizable by their deep pink color and voluminous bunches. 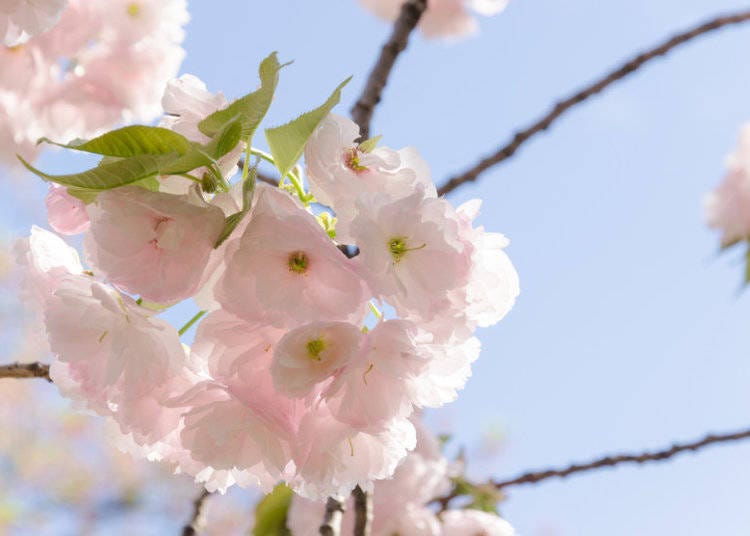 The meaning of 'Ichiyo' is 'one leaf.' When this 20-40 petal blossom is fully open, a single pistil (which is thought to look a bit like a leaf) protrudes from the center, hence its name. An abundance of inner white petals, encased in a pale pink outer layer, give this sakura flower a subtle color. Bright green leaves surround the sakura blossoms.

When do Ichiyou cherry blossoms bloom in Tokyo?
The blossoms are so prominent in Asakusa, that a festival dedicated to them is held each April. 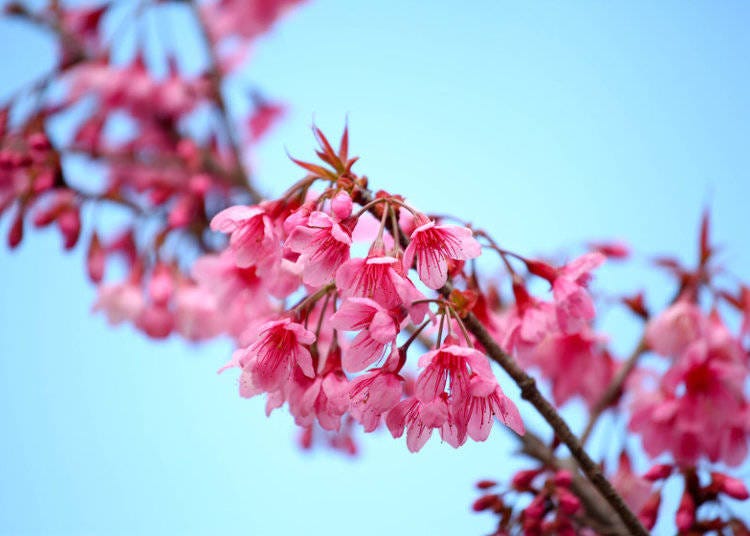 Kanhizakura are a type of sakura flower that blooms in Okinawa

Japanese cherry tree blossoms aren't limited to mainland Japan; the warm southern island of Okinawa has some special sakura of its own. Kanhizakura may not look like the typical sakura blossom, but the striking sakura is celebrated in not only Japan's Ryukyu Islands, but in Vietnam, China, and Taiwan, as well. The fuchsia flower is also known as the Taiwan cherry, bellflower cherry, or the Formosan cherry.

When do Kanhizakura cherry blossoms bloom in Tokyo?
These are some of the earliest blooming sakura, with some opening as early as January. 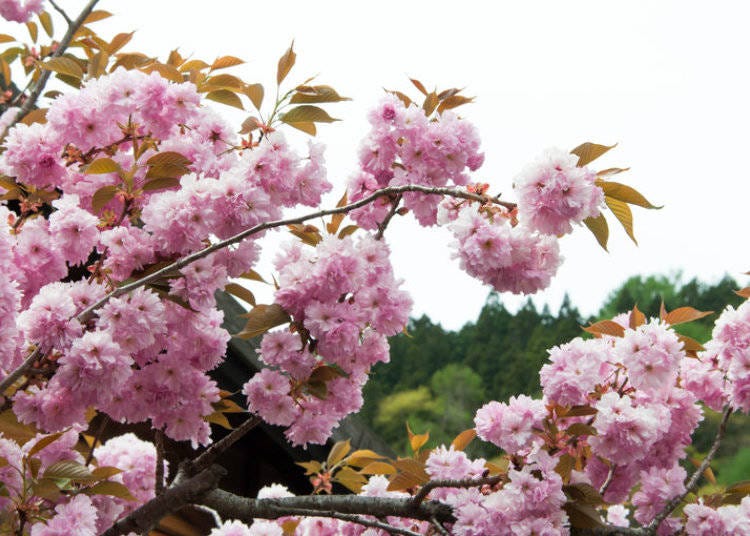 Kikuzakura sakura flowers are cute and look like pom-poms!

The name of this flower translates to "chrysanthemum cherry blossom" due to its resemblance to Japan's beloved Kiku (chrysanthemum) flower. Kikuzakura can be recognized by their pom-pom appearance, surrounded by large leaves. Each sakura blossom has anywhere from 80 to 130 soft pink petals.

When do Kikuzakura cherry blossoms bloom in Tokyo?
This variety blooms relatively late in the season; blossoms can be seen in the Tokyo area sometimes up to early May. 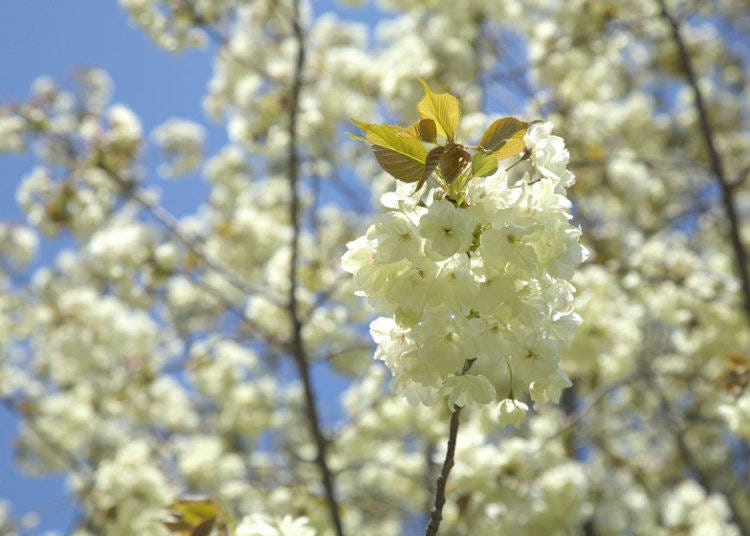 Japanese cherry blossom trees are usually pink in color, but Ukon sakura are a vivid yellow!

While the color of sakura typically falls somewhere along the spectrum of whites and pinks, Ukon sakura, with its yellow-hued blossoms, is the exception to the rule. In Japanese, 'ukon' is the word for turmeric, the spice that gives Indian curry its yellow color (and is also widely used in Japan as a hangover prevention remedy).

Due to a strong resemblance, these curry-colored flowers also became known by the same name. This is another yaezakura (double-blossom) variety, with petals usually numbering between 15 to 20 per flower.

When do Ukon cherry blossoms bloom in Tokyo?
It blooms roughly the same time as the Ichiyou, usually mid-April in Tokyo. 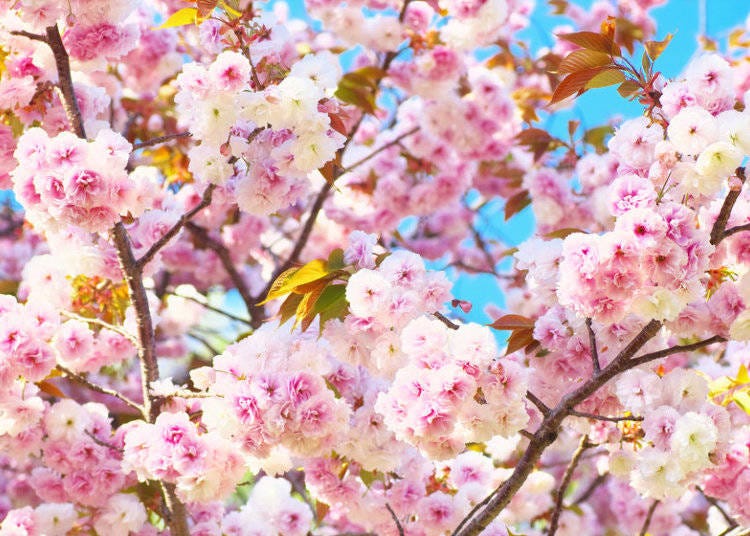 Fugenzou sakura blossoms are named after an elephant!

The name of this unusual sakura flower has an even more unusual origin: In Japanese, the literal translation of fugenzou is 'Samantabhadra elephant.' This is a reference to the Bodhisattva often depicted mounted on an elephant in Buddhist artwork.

The people of the Muromachi Period (1336 to 1573) believed the pistils of Fugenzou sakura to resemble the image. This Japanese cherry tree blossom can be characterized by its incredible number of petals (sometimes as many as 40 per blossom), as well as its jagged leaves. The color is mainly pink, with a tinge of red.

When do Fugenzou cherry blossoms bloom in Tokyo?
Fugenzou is another late-blooming sakura, typically reaching its peak in mid to late April in Tokyo.

Japan Cherry Blossom Forecast: When & Where To See Sakura in Japan
*This information is from the time of this article's publication.
*Prices and options mentioned are subject to change.
*Unless stated otherwise, all prices include tax.