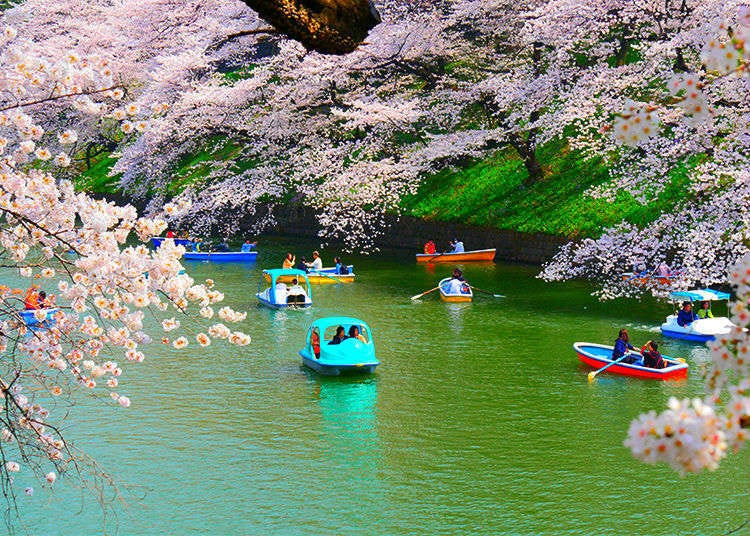 Cherry blossom season is nearly upon us and Tokyo is set to be enchanted by the ephemeral pink petals blooming across the city in unison once more!

There are numerous locations throughout Tokyo where you can admire the iconic cherry blossoms for a brief two-week period each spring, but there’s one spot in the heart of the capital that has to be seen to be believed: Chidorigafuchi Moat.

What is Chidorigafuchi Moat? 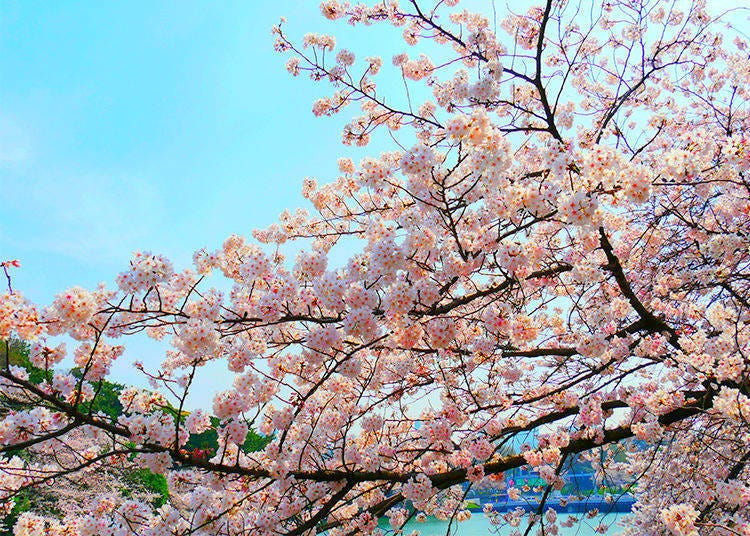 Chidorigafuchi is the name of a moat – also called Hanzo Moat – northwest of the Imperial Palace in the heart of Tokyo. Located, unsurprisingly, in Chidorigafuchi Park, the moat takes its name from the curious structure of the surrounding walls which resemble plovers, or chidori.

The moat was first dug centuries ago, as an extra layer of defense for the Shogun’s Edo Castle – the remnants of which are part of the current Imperial Palace exterior. As the former militaristic dictator of Japan, the Shogun looked upon the moat primarily as a method of preventing nefarious rebels from laying siege upon his keep.

The first cherry blossom trees didn’t arrive until much later following the disbandment of the Shogunate and Japan opening its borders to the outside world in the late 19th century.

British diplomat, Ernest Satow, planted the first trees along the moat in 1881 in a section that faced the British Embassy. Though Chidorigafuchi has long shed its martial past, the legacy of Satow’s first cherry blossoms remains.

With scores of sakura trees of various shapes, sizes and species now covering the 700-meter-long greenway – the majority of which were planted during the reconstruction efforts following World War II – Chidorigafuchi is a favorite hanami (cherry blossom viewing) spot among Tokyoites and flower-loving travelers to the city.

What makes Chidorigafuchi so special?

Aside from its imperial history and the sheer number of trees making up the cherry grove, the scenery of old, majestic branches blossoming over the waters of the moat each spring is absolutely breathtaking.

Furthermore, as Chidorigafuchi isn’t a park in the traditional sense – there are no wide-open spaces to lay down a tarp and clink bottles under the trees – you won’t find as many people clogging up the area as in the bigger parks around the city.

This feeds into the true essence of what makes Chidorigafuchi unique: a slow, tranquil walk beneath the cherry blossoms as their symbolic petals go from glorious bloom to a quiet, withering demise. By design, Chidorigafuchi urges visitors to focus on the unfiltered beauty of Japanese nature without distraction.

When is the best time to visit Chidorigafuchi for cherry blossom viewing? 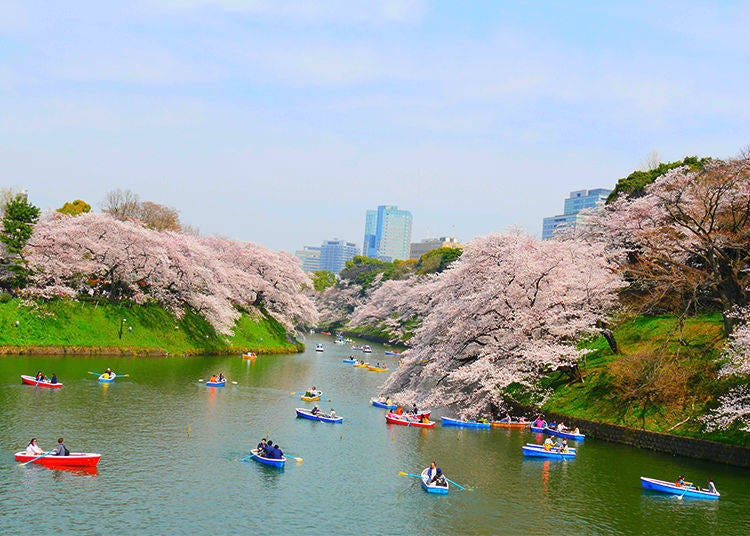 Of course, we recommend you go when the trees are in full bloom in mid-spring. Though the exact timing varies from year to year and is closely monitored right up until the predicted forecast is announced a few weeks, you can expect them to be at peak beauty around the last week of March or the first week of April.

A cold snap can delay the sakura from blooming until April or can even extend the full bloom period from five to 10 days. Putting yourself in the Tokyo area during this period will massively increase your chances of seeing the cherry blossoms at the peak of their powers.

These cherry blossoms near the Imperial Palace are best enjoyed at the end of March to early April when the flowers have fully opened. Especially stunning is the view in the early morning sun – the boat pier opens as early as 9:30 a.m. – when the flowers are bathed in a soft, gentle light. Early morning also sees significantly fewer people queueing for boats.

Alternatively, you might want to visit Chidorigafuchi after the sun has set. Then, an almost otherworldly scenery awaits, as the trees are lit up and illuminate the night as if the flowers themselves were millions of tiny lights. With the Tokyo Tower rising above the moat in the distance, it is clear why so many people cannot resist the fairytale-like scenery of Chidorigafuchi.

*The Chidorigafuchi sakura illumination has been canceled for 2021 due to Covid-19.

How many cherry trees are there at Chidorigafuchi? 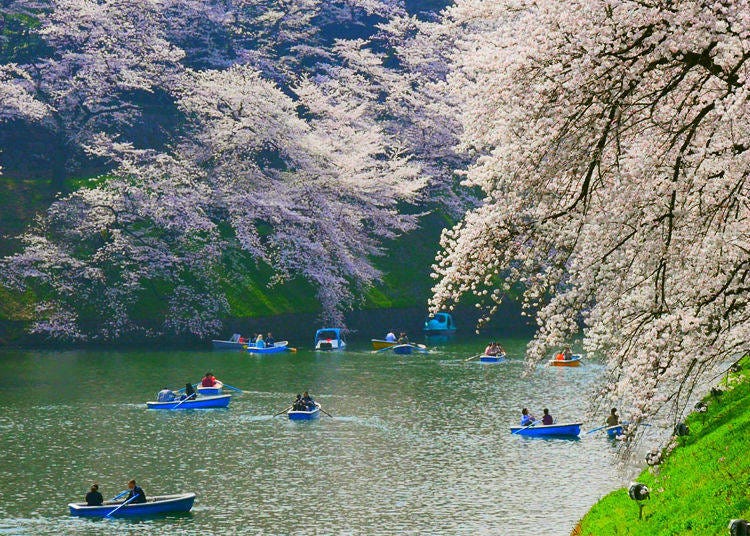 There are around 260 individual cherry blossom trees of many different varieties in Chidorigafuchi, including sections of the popular Somei-yoshino and yamazakura species. While the overall number may not seem gargantuan at first, it is the density and thickness of the boscage which creates such dramatic scenery.

Best way to enjoy the blossoms at Chidorigafuchi 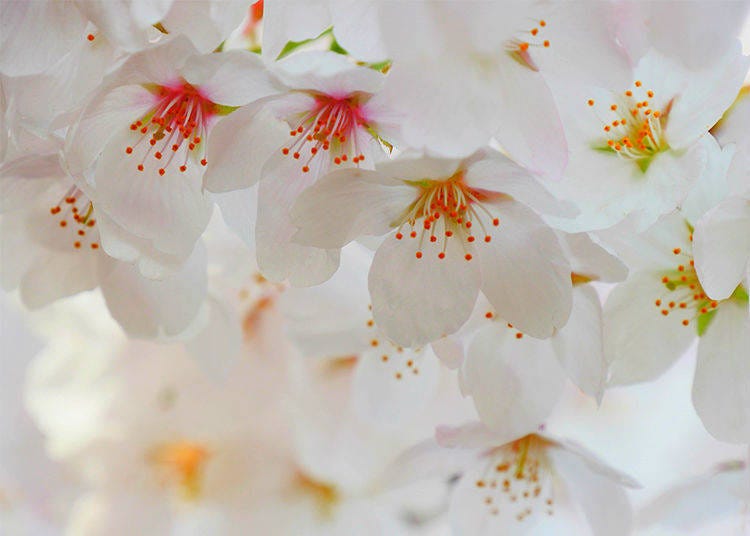 As we mentioned, a quiet stroll beside the Tokyo Imperial Palace – potentially with a cold alcoholic beverage or sakura-flavored snack – along the greenway is the optimal way to enjoy the blossoms on foot. Given the park’s plethora of cherry blossom trees and its historic location, it will be busiest during peak bloom weekend. If you can arrive early and/or on weekdays, you likely have more of the trees to yourself. 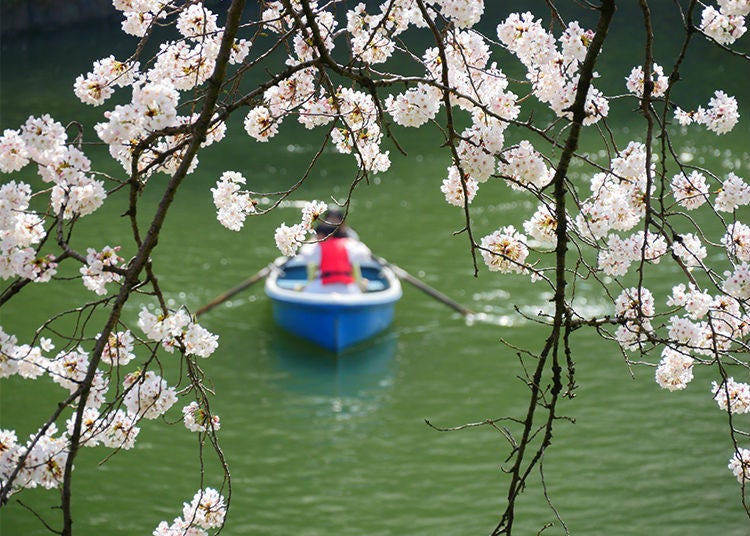 For an alternate method of viewing, hit Chidorigafuchi first thing in the morning and take to the placid waters underneath the overhanging branches by rowboat. The boat pier opens as early as 9:00 a.m. – when the flowers are bathed in a soft, gentle light. Early mornings, especially on weekdays, also see significantly fewer people queueing for boats.

How to get to Chidorigafuchi 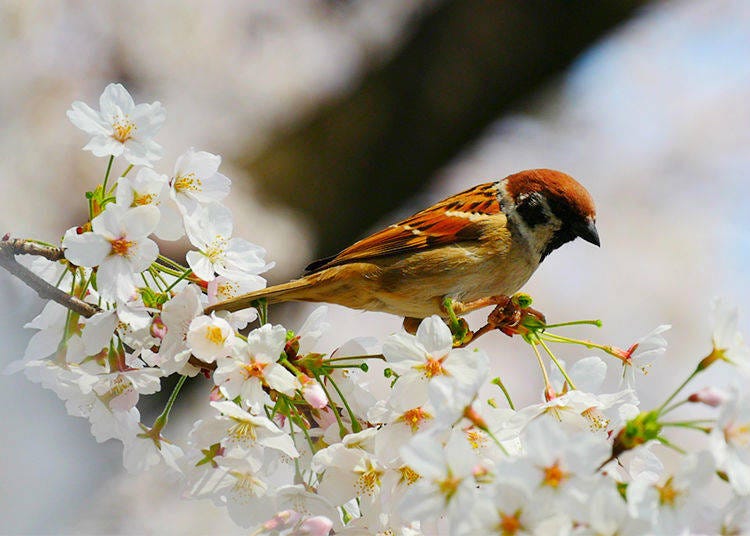 If you want to enjoy this postcard-worthy scenery, you can access Chidorigafuchi via the Hanzomon Line, Tozai Line, or Shinjuku Line. Jump off the train at Kudanshita Station, then take a 5-minute stroll toward the moat where the first trees lining the 700-meter-long promenade come into view. Alternatively, you can start at Tokyo Station (accessible via many train and subway lines) and circumnavigate the outer moat of the Imperial Palace to reach Chidorigafuchi on the opposite side. The walk will take around 30 minutes, juxtaposing the scenery of ancient Japan through the Palace grounds on one side, and the high-rise modern metropolis of downtown Tokyo on the other.

When in the area, there are several other historical landmarks and greenspaces near Chidorigafuchi you ought to check out.

Kitanomaru Park, just a 10-minute stroll from the greenway, is a picturesque public park perfect for another idyllic walk through the heart of the Japanese capital. Nestled inside the boundaries of the Imperial Palace moat, it too is reminiscent of Japan in the pre-industrial era. But it's not just a pretty nature reserve; you can also find the Nippon Budokan, a Tokyo 2020 venue initially built for the judo competitions at the 1964 Olympics, as well as the Science Museum and the National Museum of Modern Art, Tokyo.

And while you’re this close, it would be remiss of you not to check out the Imperial Palace Tour. Unlike many of the feudal castles of Japan which can be entered, and often climbed from within, the Imperial Palace cannot be accessed. After all, the Emperor and Empress of Japan still call the place home.

You can however check out the surrounding area inside the outer moat, including the old castle walls – parts of which have existed since the days of the Shogun (1603 – 1868) – and the neatly landscaped Imperial Palace East Garden.