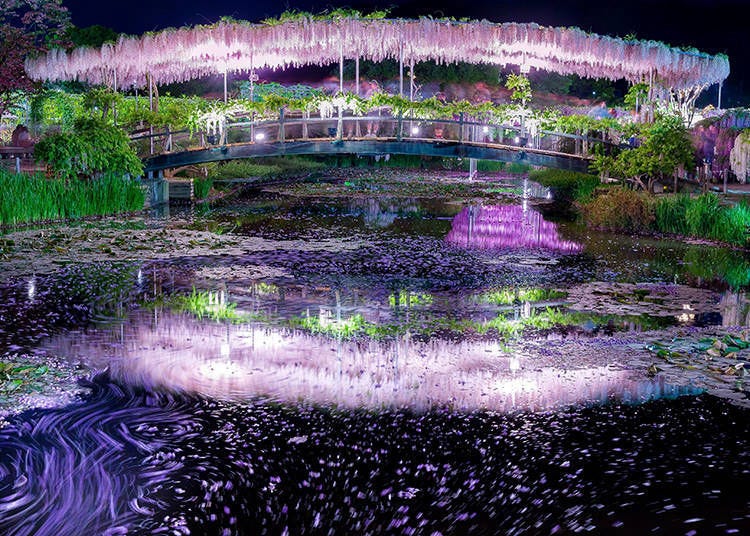 Ashikaga Flower Park is a famous nature spot with over 350 wisteria trees in full bloom from mid-April to mid-May.

The park is home to an ancient wisteria tree that boasts an age of around 160 years, taking you to a world that almost looks like the colorful jungle from the movie Avatar and an 80-meter-long white wisteria tunnel.

The fairytale-like scenery is so beautiful and enigmatic, that it almost seems unreal. And yet, the stunning blooms gently sway in the wind right above your head.

Japan’s wisteria season is from mid-April to mid-May, closely following the cherry blossoms, so if you’re planning to have a full-on springtime adventure, you cannot miss out on this amazing phenomenon!

(*This article was written in 2018 and has been partially revised to reflect the latest information. The flowering season, event schedule, and content are subject to change.) 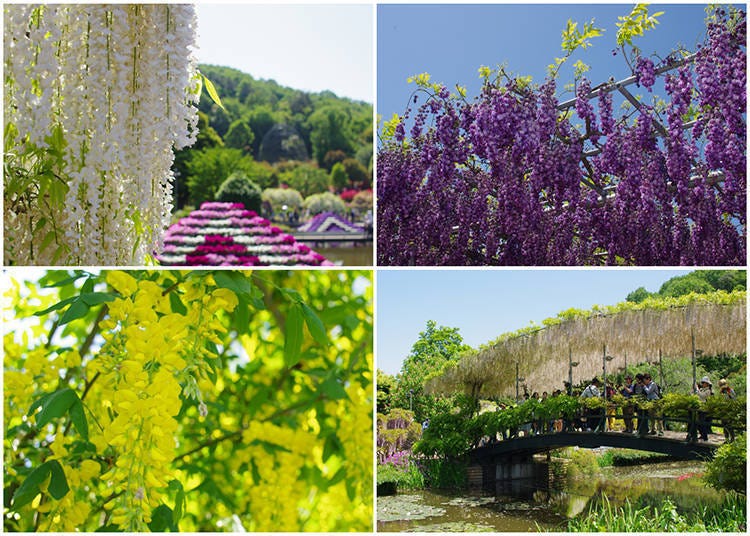 ・Access
From Tokyo Station, take the Ueno-Tokyo Line to Oyama Station and transfer to the Ryomo Line toward Takasaki. Get off at Ashikaga Flower Park Station, which is just a 1-minute walk away from the park’s West Gate. The trip takes just over 2 hours, depending on the time of day.

With more than 1.5 million visitors per year, Ashikaga Flower Park is a must-see tourist destination.

The park offers stunning floral sceneries all around the year, but the wisteria from mid-April to mid-May is the reason why Ashikaga Flower Park is so famous. Accordingly, it is important to book tickets ahead and arrive early, to help avoid lines and crowds.

Featuring the Great Wisteria and the White Wisteria, two natural monuments of Tochigi Prefecture, the park even offers spectacular illuminations that are known as one of Japan’s greatest night views.

Following this success are the illuminations in late October that have been among the top choices of the National Illumination Ranking.

When is Ashikaga Flower Park's wisteria in bloom? 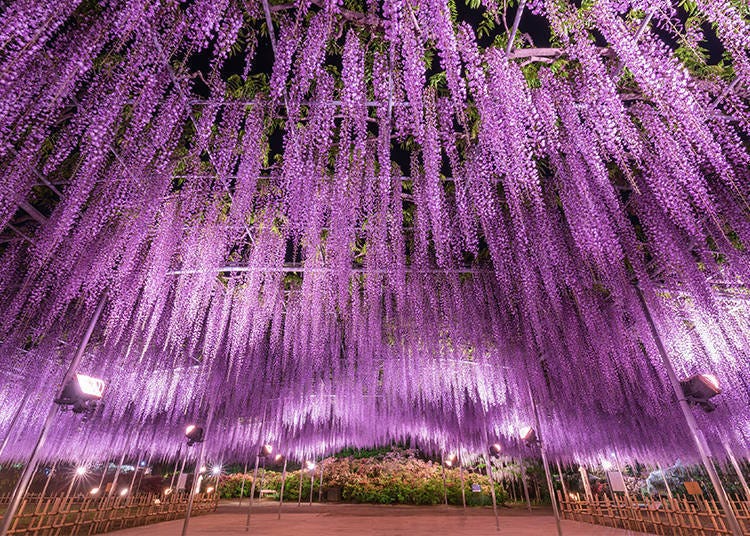 Every year, the park holds an event called “A Tale of the Wisteria – the Great Wisteria Festival.”

In 2022, the event will be held from April 16 to May 22. The wisteria is expected to bloom earlier than in other years.

We visited the event right in the heart of the park. It’s about a 60-minute walk if you head straight for it, but a relaxing stroll that takes about 90 to 120 minutes through the wisteria-clad garden is highly recommended. 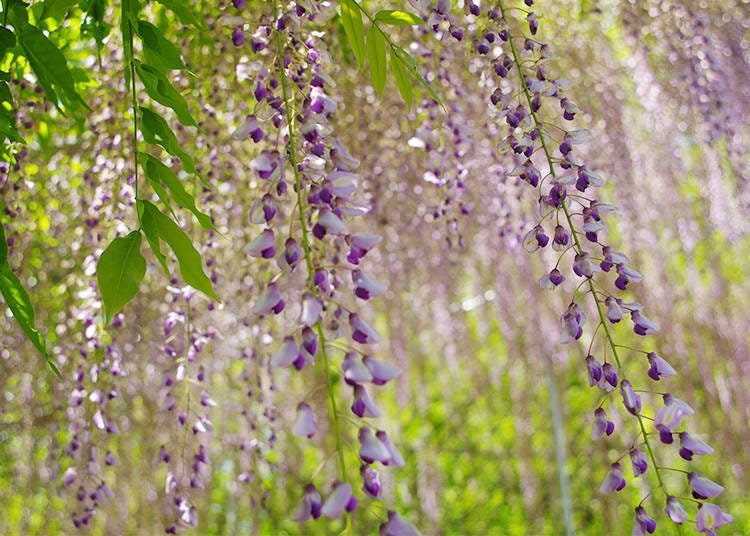 Here is why it was chosen by CNN: The best wisteria spots! 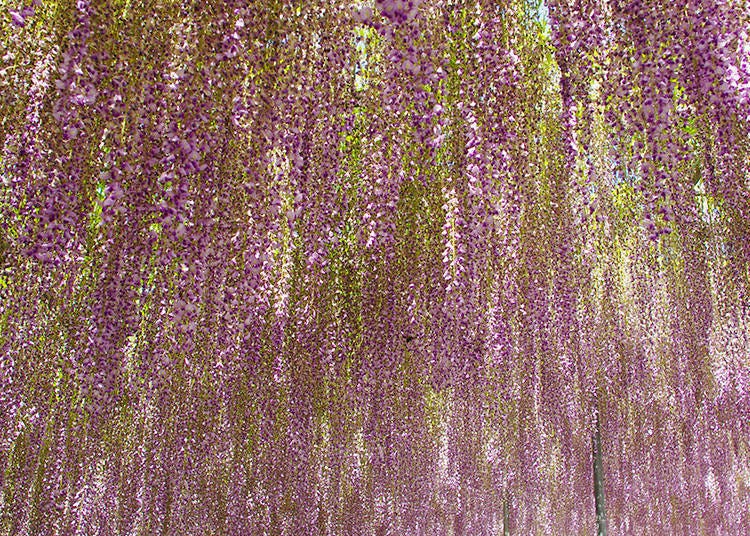 Wisteria blossoms from the top, so you’ll never see all buds in blooms at once, but it also means that there’s no classic full bloom period. The deepest and most beautiful color can be enjoyed while the bottom of the flower is still closed, and about two-thirds of it are in bloom.

But even if you miss this timeframe, you’ll get to indulge in the stunning scenery as the buds just above your head show their beauty then.

In 2018, we visited in late April, catching the pink wisteria at the end of their bloom, while the Great Wisteria and the white wisteria were just at their peak. The yellow variety sees full bloom in May. 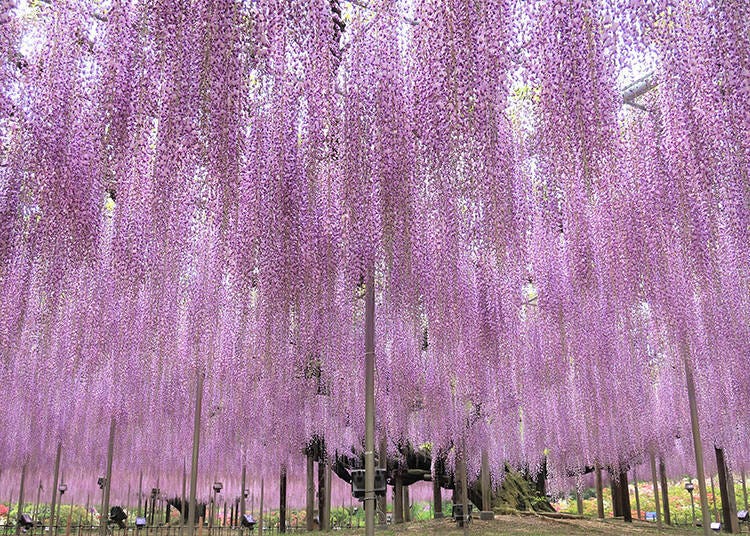 The Great Wisteria: the Park’s Symbol
The absolute showstoppers are the two Great Wisteria trees. One of them covers an astounding 1,000 square meters with about 80,000 individual flowers. Wisteria trees get old, and while this nearly 160-year old tree may seem like a grandpa plant to you, but a truly old wisteria would have an age of about 1,200 years. 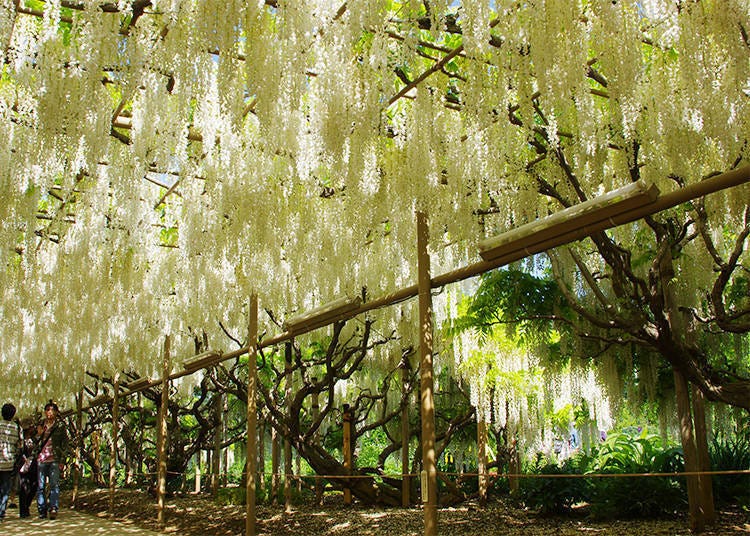 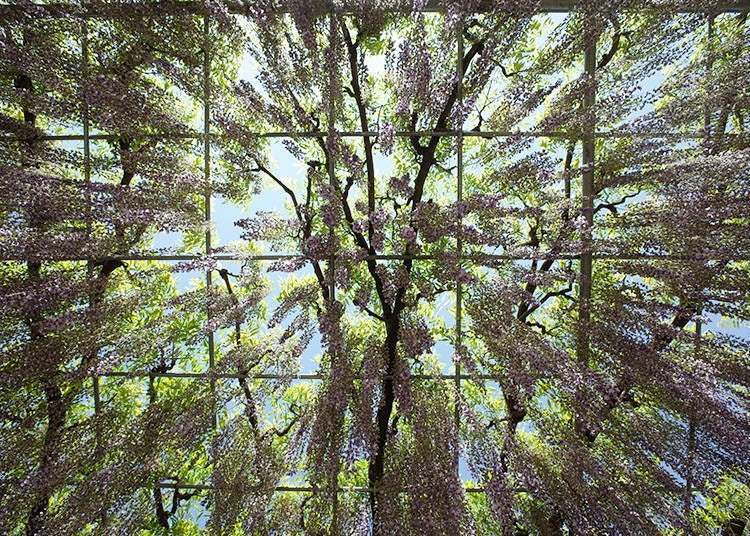 The Wisteria Arbor: Looking Up From Below
Step under the wisteria arbor and look straight up – you’ll be stunned by the scenery of gentle sunbeams falling through a ceiling of flowers, illuminating them in a very peculiar way.

The nightly illuminations are beautiful, but they do not surpass this natural harmony of sunlight and flowers, creating the most vivid purples and greens. 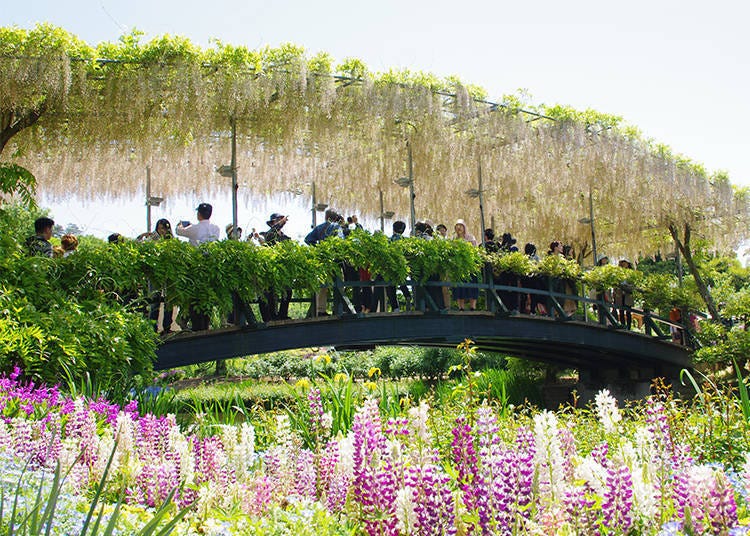 The Pale Pink Bridge: A Water-and-Flower fantasy
We caught the pale pink wisteria at its peak. The Pale Pink Bridge is exactly what it sounds like – a little bridge with a roof of pale wisteria flowers. Especially stunning is are the nightly illuminations, creating enigmatic reflections on the pond below. 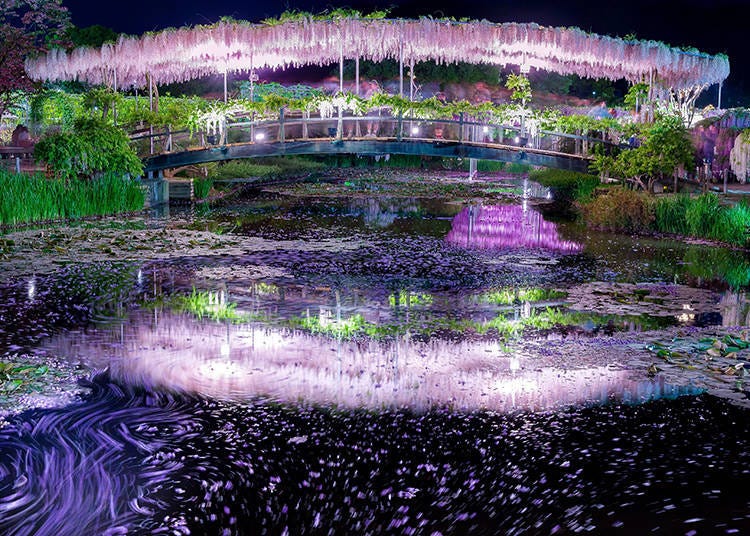 The night view of the illuminated wisteria.

Wisteria galore: How to take the best pictures 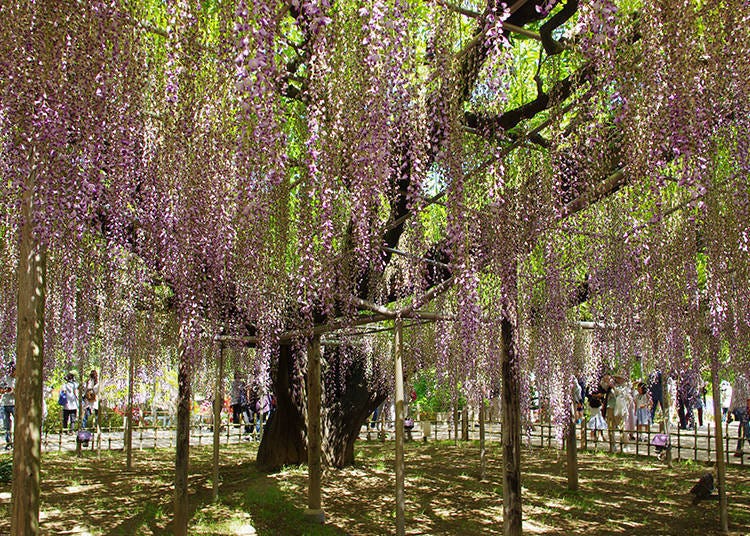 The Great Wisteria
“If you want to take a great picture of the 160 to 170cm long wisteria flowers, sitting or squatting down is best to showcase their size,” explains Mr. Kobayashi, who works at the Ashikaga Flower Park.

It’s true; lowering the eye level brings out the unique beauty of the long flowers far better than taking a picture while standing. This also emphasizes the majestic trunk of the tree a lot more, its dark bark creating a wonderful contrast to the pastel blossoms. 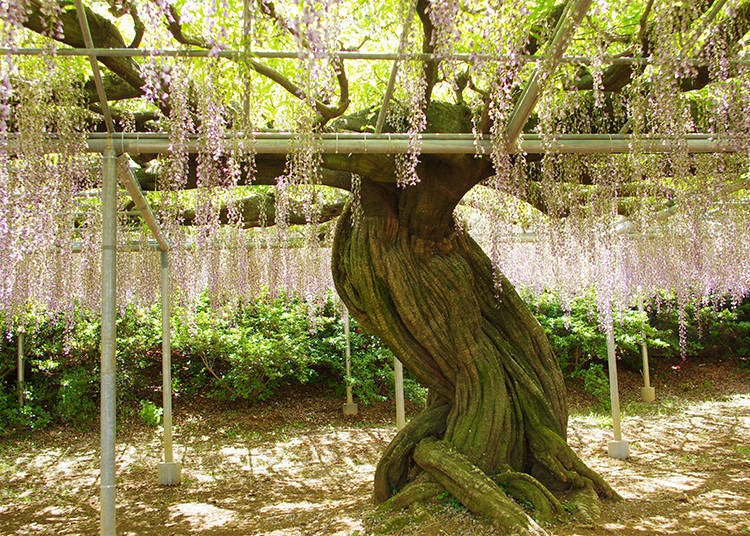 The Purple Wisteria Arbor
While the flowers may look the same, the trunk of the purple wisteria arbor is more elegant than powerful and is curved in a uniquely beautiful way. It may not be as wide as the Great Wisteria but boasts a more filigree and soft appearance. 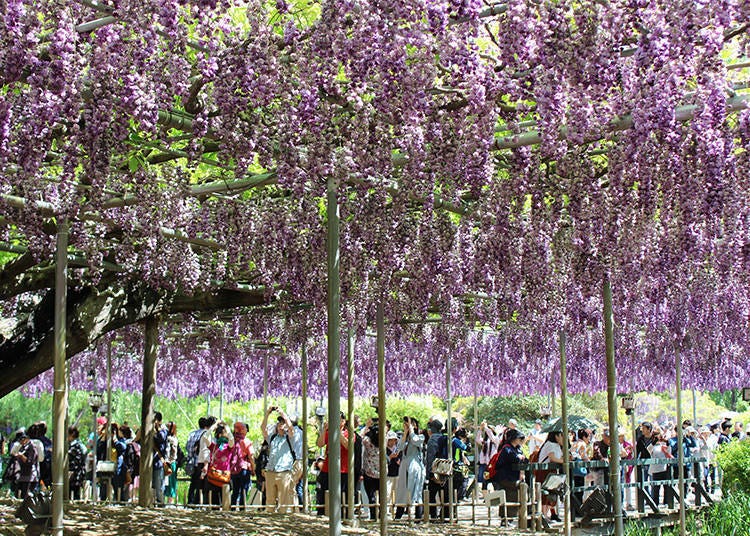 The Yae-Fuji Wisteria
This wisteria species is awe-inspiring, as the double-blossom creates rich clusters of a shape that resembles grapes. It is said that this variety is hard to come by, so enjoying the dense flowers is a rare treat.

Stronger in scent and deeper in color than the Great Wisteria, the yae-fuji holds its own against the park’s most famous icon. 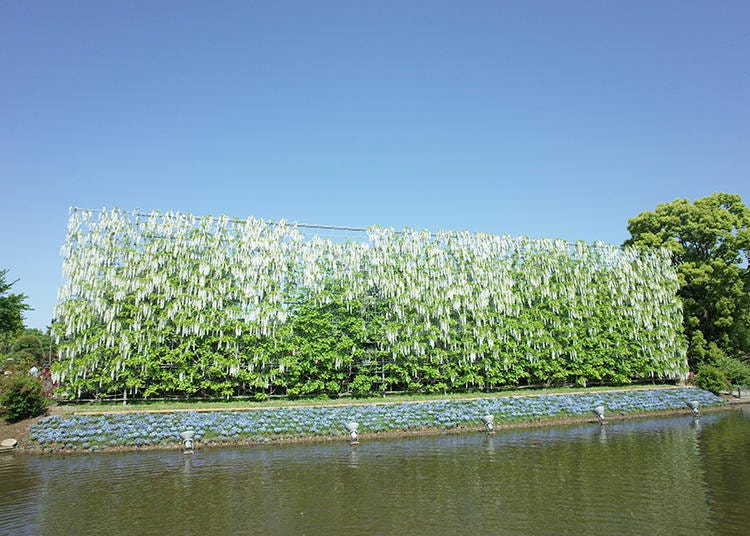 The White Wisteria Waterfall
This wisteria is shaped like a waterfall, 35 meters wide and 9 meters tall. The falling white flowers cascade down over the water and are a stunning sight.

Make sure to also step around this waterfall to see another wisteria tree of this variety, one that is hidden and somewhat of an insider tip or secret spot. 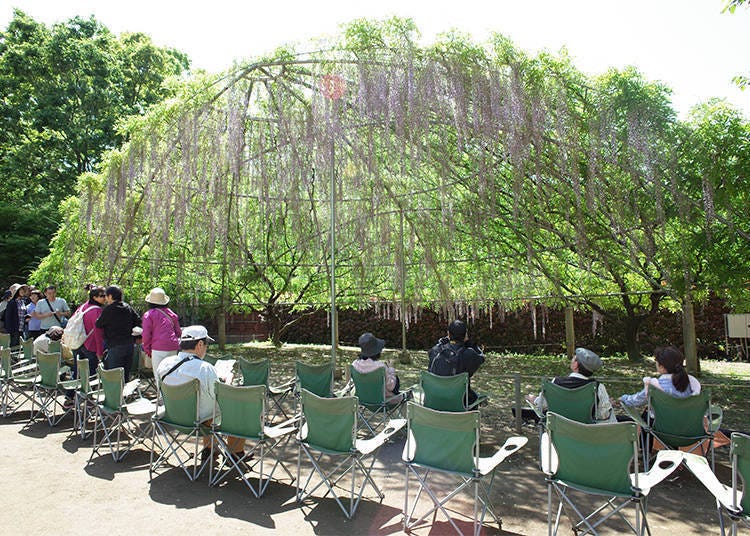 The Wisteria Dome
At the far end of the garden towers the wisteria dome, which is often overlooked by visitors due to its somewhat remote location. The dome-shaped pillars are entirely overgrown with wisteria flowers, giving them this stunning shape as they gently sway in the wind. Several chairs in front of the dome invite you to rest your feet for a while, shaded by the flowers themselves. 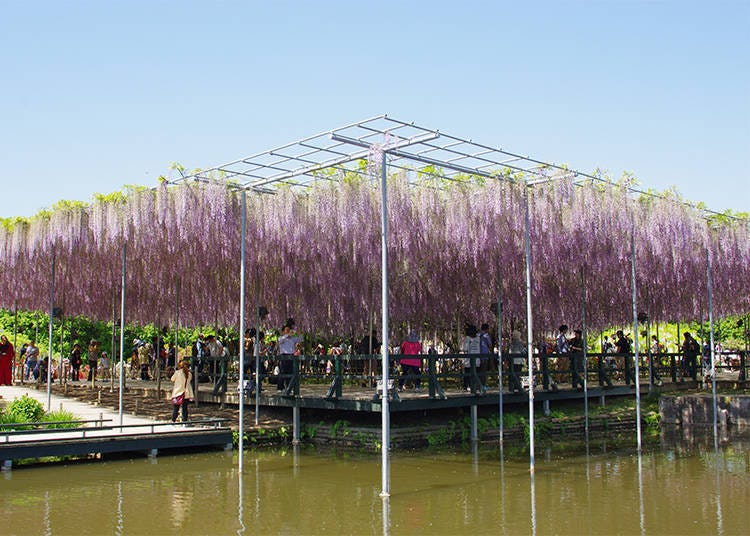 Onaga-Fuji Wisteria
The wisteria variety called onaga-fuji looks like a curtain of hundreds of flowers, responding to every breeze just like a light piece of fabric. It’s a breathtaking spectacle.

The best way to capture it in a photo or video is from the small pier on the other side. The night view here is also especially recommended, as the reflections on the water seem to turn the scenery into an enigmatic dream landscape. 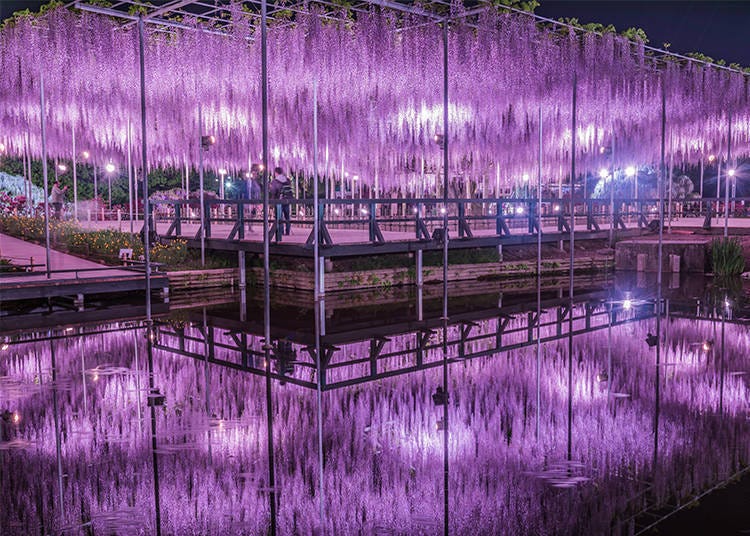 The beautiful night view of the “wisteria curtain.” 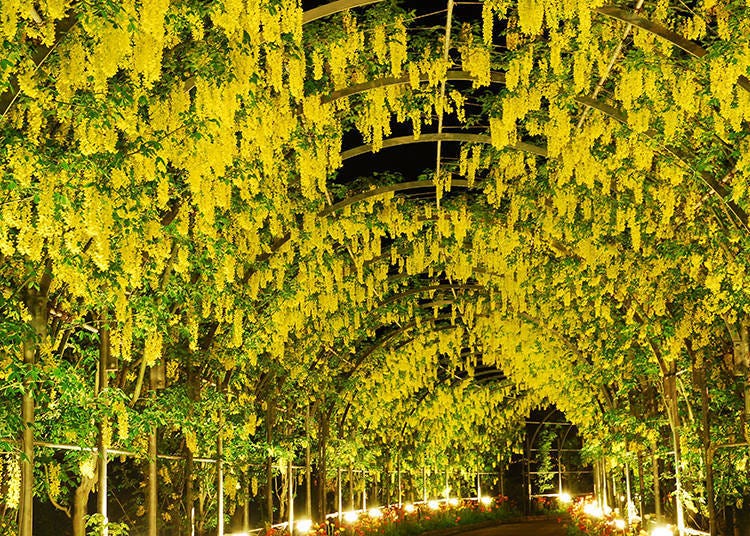 The Kibana Wisteria Tunnel
This tunnel becomes the major highlight from May when the yellow wisteria is in peak bloom. Said to be a variety that is naïve in Europe, cultivation in Japan is rather difficult. Just like their white cousin, the flowers create an 80-meter long tunnel. 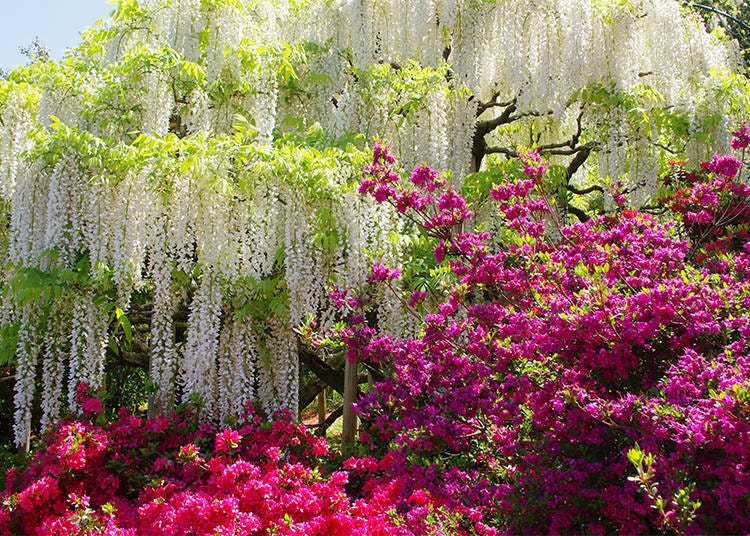 While everyone flocks immediately to the famous sights of Ashikaga Flower Park, numerous less crowded spots shine in their very own beauty. Especially recommended is the “Sea of Azalea,” chock-full of colorful azalea flowers.

You’ll find it in the center of the park. Keep your eyes open for a white wisteria tree, and you’ll immediately notice the beautiful contrast between white and pink. 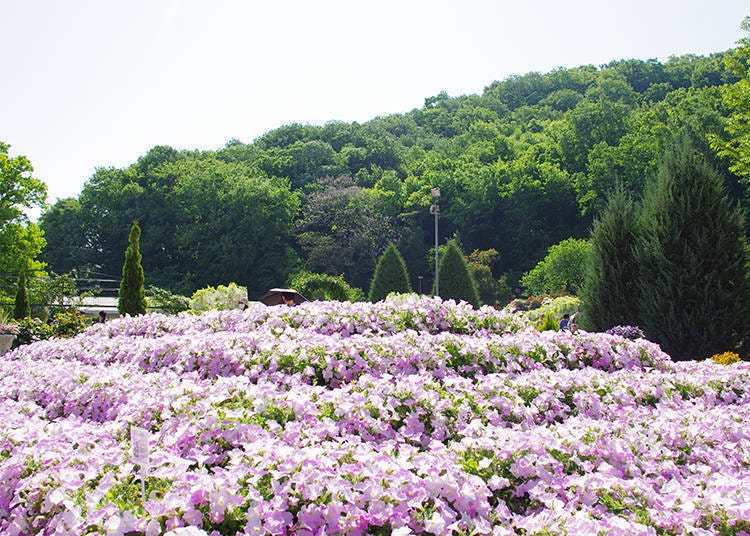 Just right behind the entrance is the Flower Stage, where seasonal flowers bloom. The picture shows the stage in late April 2018 (petunias). 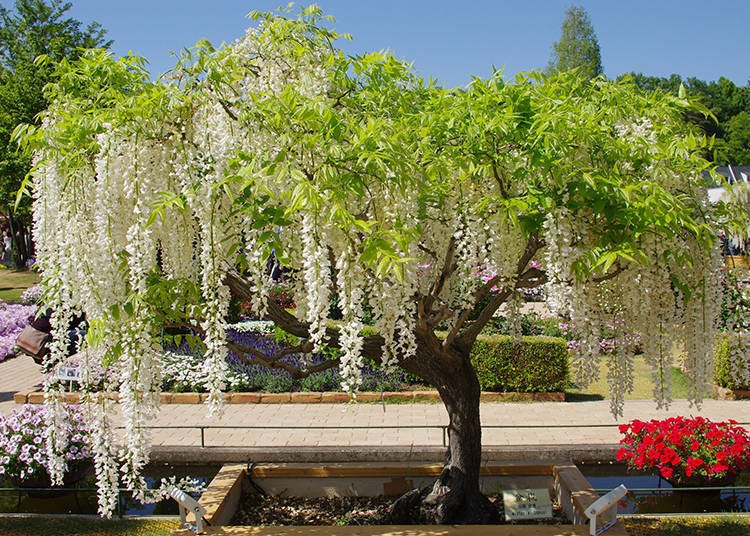 On top of that, seasonal flower beds are dotted all around the park, and during the time of our visit, wisteria bonsai was chosen as the “in season” decoration. 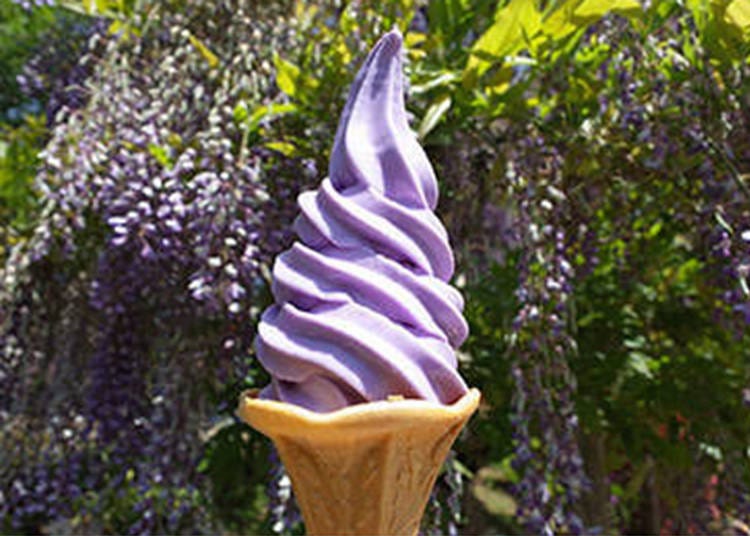 Ashikaga Flower Park does its reputation as a famous wisteria spot further justice by offering a variety of limited snacks, sweets, and souvenirs. Especially delectable is the wisteria soft serve for 400 yen (tax included), only available at the park. 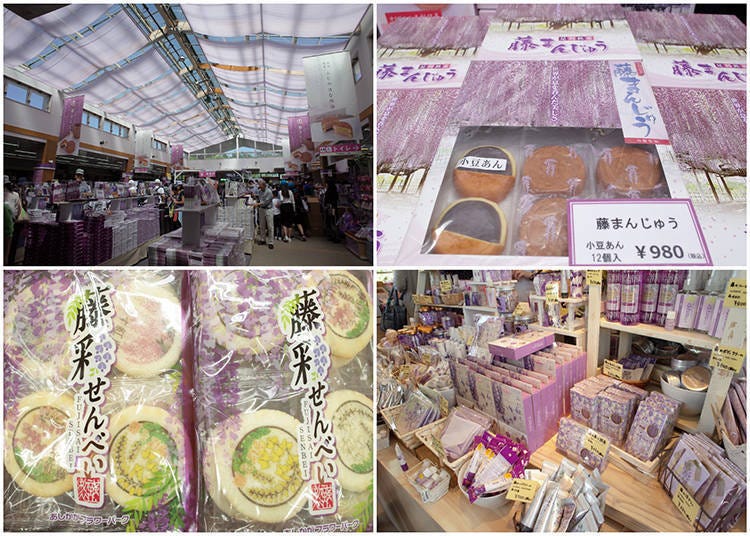 There are also plenty of souvenirs to enjoy. Next to regional specialties such as buckwheat, many of them focus on the wisteria flowers. Wisteria cosmetics, sweets, and all sorts of accessories and miscellaneous goods invite you to browse for the perfect memento.

On top of that, collaborations between Ashikaga Flower Park and various companies promise rare items that can only be found at the park itself.

When is the best time to visit Ashikaga Flower Park? 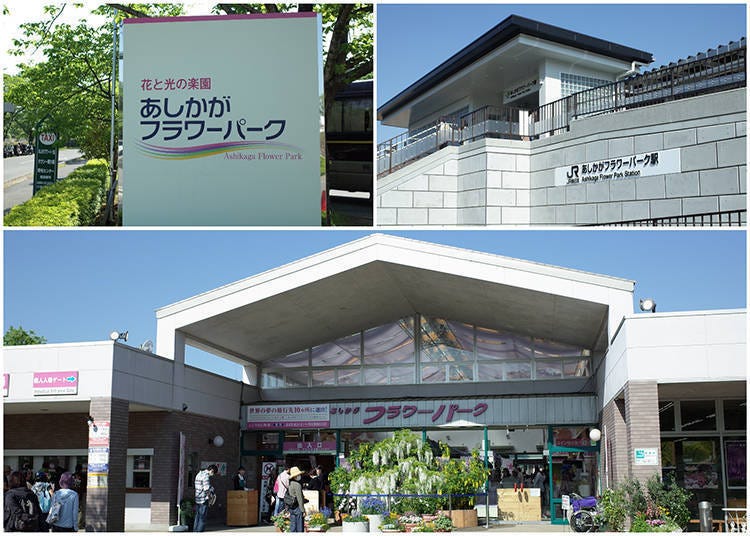 After the famous wisteria bloom, June brings stunning roses and hydrangeas, while autumn is another famous rose and herb season. Even winter is magical at Ashikaga Flower Park with its many illuminations.

Even if you’ve missed the wisteria season, it is a wonderful destination for a day trip from Tokyo. 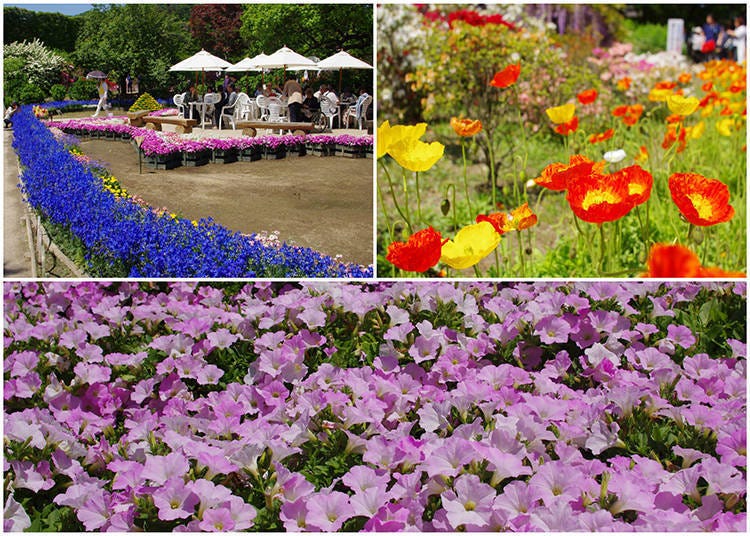 A Tale of the Wisteria – the Great Wisteria Festival 2022

A Tale of the Wisteria – the Great Wisteria Festival 2022

Japan Has Sakura On The Floor?! 'Shibazakura' Colors Hitsujiyama Park Every Spring

20 Beautiful Japanese Flowers and When & Where to See Them!
*This information is from the time of this article's publication.
*Prices and options mentioned are subject to change.
*Unless stated otherwise, all prices include tax.