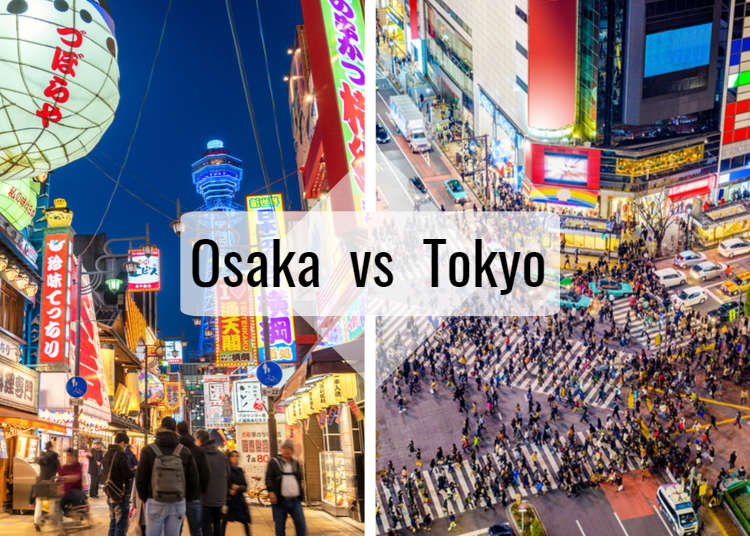 Osaka VS Tokyo: Which Japanese City Is Worth Visiting First?

Coming to Japan for the first time comes with a difficult decision: where exactly in this amazing country do you go first?

The two most popular answers are, of course, Tokyo or Osaka. These two cities offer everything you could want: iconic landmarks, amazing food, endless shopping, and immersive culture, but which one is right for you?

While Tokyo and Osaka are only 500km apart, the differences can make it seem like they’re at opposite ends of the country. Tokyo is known for its liveliness and dynamism, while Osaka is oft considered more carefree and relaxed.

Do you want to see Japan’s most famous landscapes and take in as much as possible, or do you want to take it slow and see where the streets take you? Let’s look at some of the similarities and differences between these two megacities, so that you can choose your dream destination.

Visually, there are few places in the world like Tokyo. It’s a huge metropolis soaked in neon light, and its relationship with technology is on show at every turn. While Osaka has a few similarities, its buildings, architecture, and streets have a more traditional character.

Both Tokyo and Osaka have a number of unique locations and heritage sites, so you’ll be spoilt for choice no matter which city you’re in. 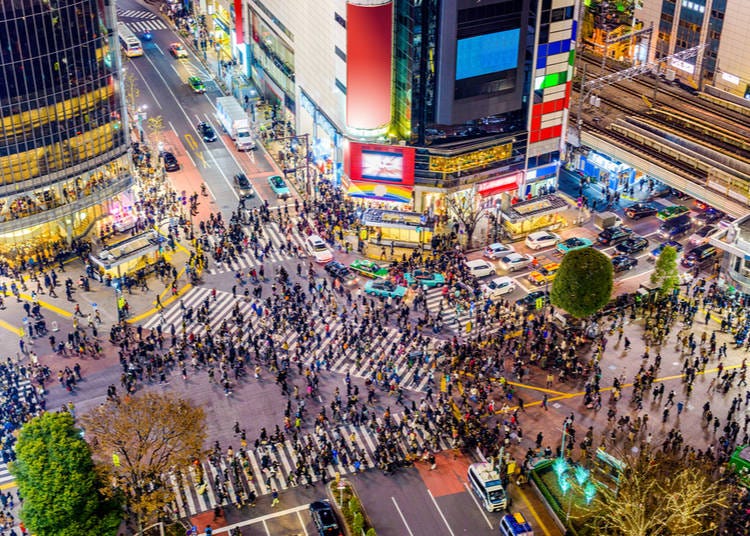 Tokyo
Tokyo is home to some of Japan’s most iconic landmarks, including the Shibuya Crossing, Tokyo Tower, Tokyo Skytree, the Imperial Palace and multiple ancient temples and shrines. There are also around a hundred different museums in Tokyo, showcasing everything from modern art to the history of beer. 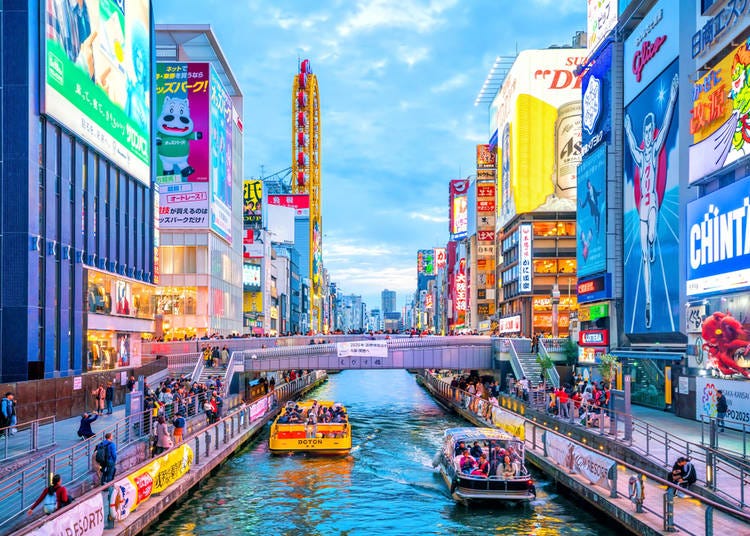 Osaka
Osaka is slightly less touristy in some ways, and more catered towards those who want to explore. If it’s cultural history you’re interested in, you’ll find hundreds of sacred temples and shrines in Osaka, plus the ancient Osaka Castle. Abeno Harukas, the tallest building in Japan, has eleven floors of shops, restaurants, museums, and an observatory deck with the best view of Osaka in the city.

28 Fun Things to Do in Osaka: Embrace These Activities On Your First Trip!
11 Best Day Trips From Osaka: See What the Kansai Region Has To Offer!

No matter where you are in Japan, you’ll never be bored, but is there much difference in entertainment between Japan’s two biggest cities? 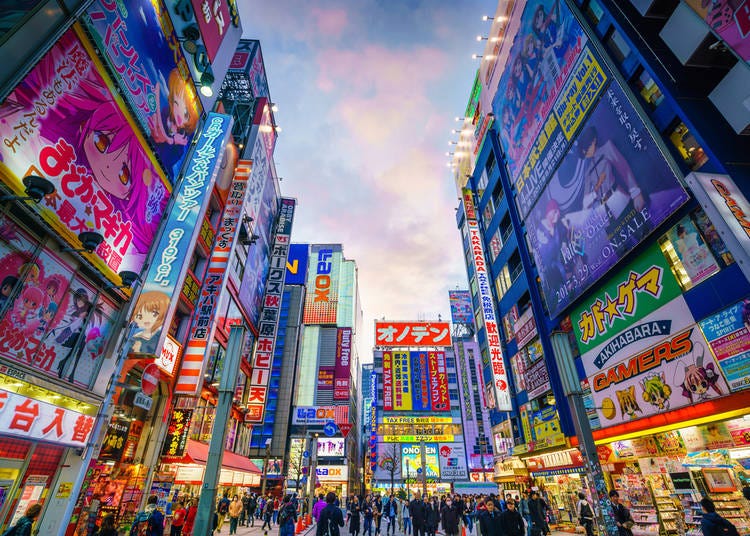 Tokyo
If we’re talking large-scale attractions, Tokyo Disneyland and Fuji-Q Highland, two of the most popular theme parks in the country, are both easily commutable via central Tokyo. Hello Kitty fans will be in heaven too, since Sanrio Puroland (Hello Kitty Land), is only an hour away too.

Ginza, Tokyo’s famous shopping district is a paradise of entertainment, with not only endless shops and arcades, but also boasting several exhibitions and two famous theatres (Kabuki-za and Shinbashi Enbujō).

For pop culture enthusiasts, Tokyo is the hub of otaku culture in Japan, most notably in the Akihabara area in the Chiyoda Ward. Akihabara is packed with places dedicated to video games, TV shows, anime and manga, and is noted for its distinct fashion and maid cafes. 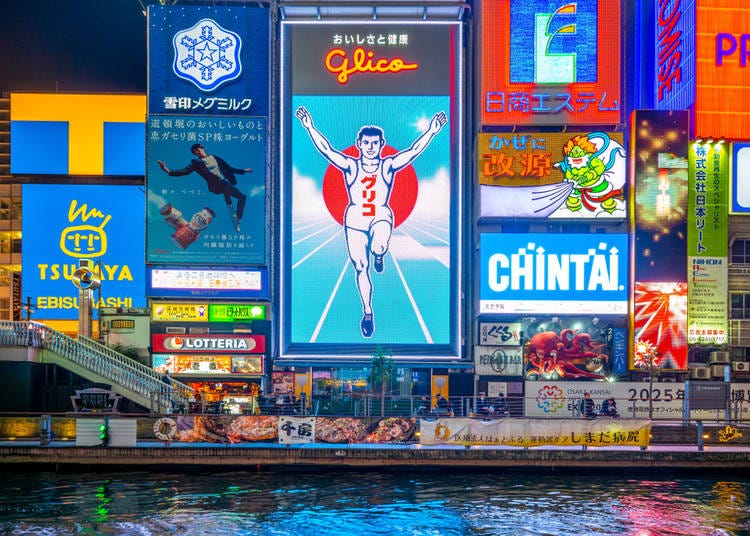 Osaka
Osaka has its own otaku hub in Nippombashi, sure to satisfy your pop culture cravings. There’s a number of amusement parks in the city too, including the famous Universal Studios Japan, home to Super Nintendo World (a 30-minute trip from Central Osaka) and Mentai Park ATC.

Dotonbori, known as ‘the bridge heart of Osaka’ is another place sure to keep you enthralled. It’s a lively street full of restaurants, bars and stores, with the iconic Dotonbori canal running parallel along.

If you want to get away from the cities and into the surrounding areas, day trips from Tokyo can take you to Mount Fuji, the mountain town of Nikko or the famous Hakone Shrine. Likewise, Osaka is the perfect jump-off point to explore the outer districts of the Kansai region. Kyoto, Nara and Hiroshima are all within commuting distance of central Osaka.

While both cities have their respective busy and peaceful areas, the atmosphere between Tokyo and Osaka can feel worlds apart. 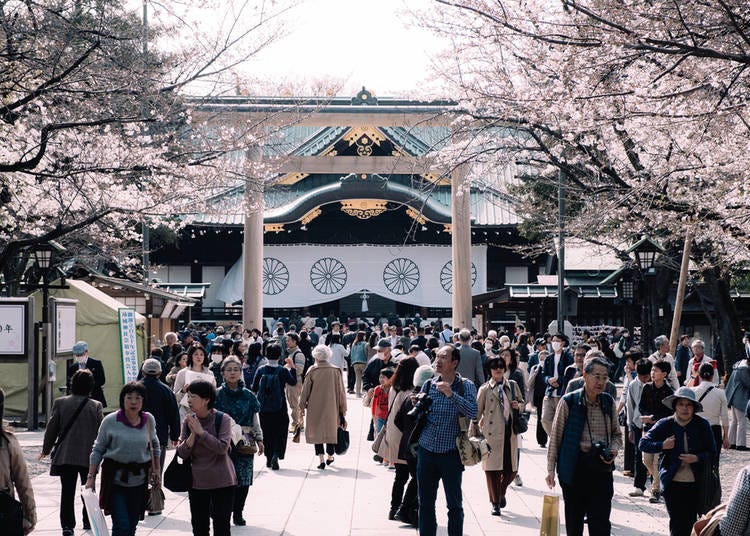 Tokyo
Tokyo has a reputation for being a hustling, fast-paced city, and this is certainly reflected by its vibrant atmosphere and a constant stream of people on the move. But interestingly, if you get talking to people around Tokyo, you’ll find that Tokyoites are actually quite shy and reserved.

Make no mistake, Tokyo is a very friendly city. Natives have good manners and are always willing to help if you ask them; otherwise, they’ll usually keep their distance and keep to themselves. Given the number of tourists and expats based in Tokyo, there’s a strong English language culture too. 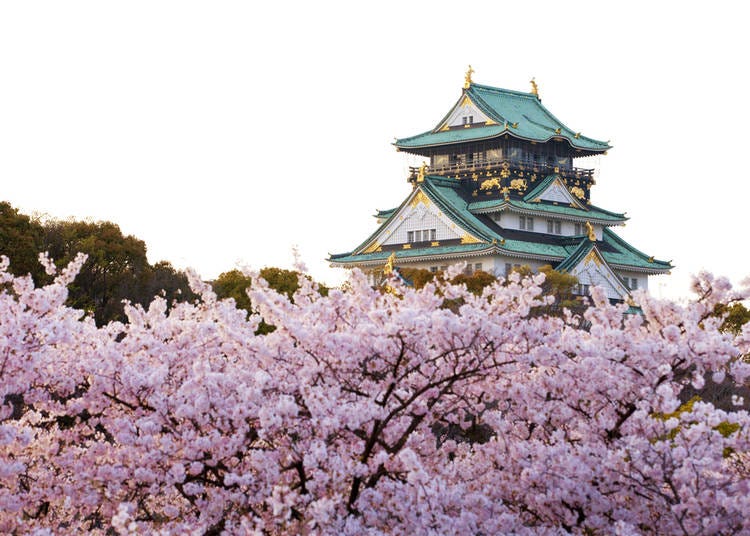 Osaka
Osaka, on the other hand, is quite the opposite. Given Osaka’s history as a merchant city, many locals learned to haggle with other natives and tourists. This tradition is still in place today, so you’ll find Osaka folk won’t hesitate to reach out and talk to you.

There’s a more laid-back atmosphere in Osaka too. While it’s still a bustling city with a good amount of tourists, the common attitude is carefree and fun-loving. There’s a very strong Manzai comedy culture, which also stems from its mercantile history as shop-owners would joke around with tourists to get them into their stores.

Japan’s is a foodie’s dream, so no matter where you are, you’ll be blown away by the authentic cuisines on offer. 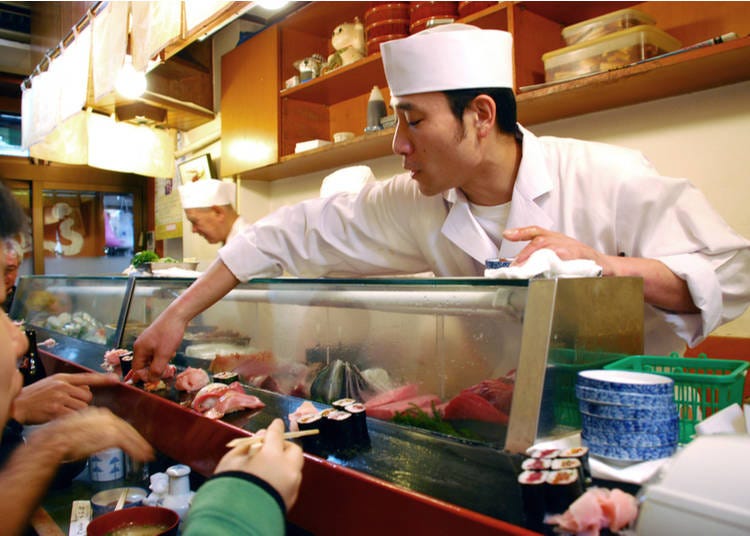 Tokyo
Tokyo has a strong food culture stemming from the Edo period, with a penchant for sushi, ramen and tempura. It’s a city full of classic Japanese dishes, and currently holds the world record for the most Michelin-starred restaurants of any city in the world (even more than Paris) as of the time of writing. 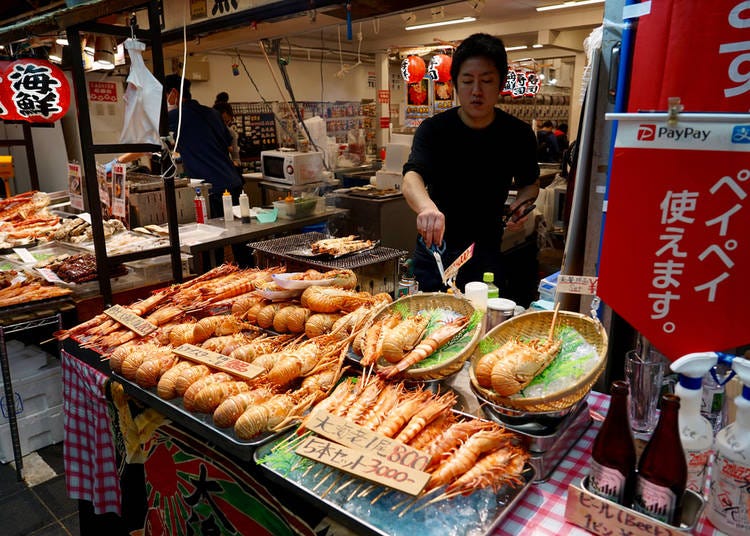 Osaka
However, while you’ll never be short of exquisite cuisine in Tokyo, Osaka is known as the food capital of Japan, or tenka no daidokoro ('the country’s kitchen'). In contrast to the deep, rich flavors common in Tokyo, Osaka people have a preference for light, sweet and salty dishes. The most famous dishes in the city are okonimiyaki(cabbage pancake) and takoyaki (octopus balls).

In addition to the thousands of restaurants and izakayas, nowhere showcases Osaka’s food culture more than Kuromon Market. The famous indoor market boasts around 150 stalls, most of which sell fresh fish, meat and traditional sweets. 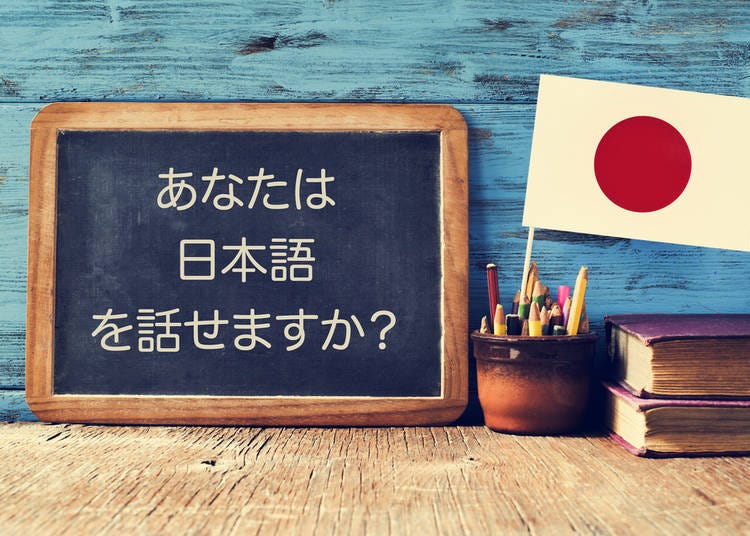 Surely everyone in Japan speaks the same language, right? Well, not quite. There can be quite a noticeable difference in dialects, inflections and even the words themselves between the Kanto (Tokyo) and Kansai (Osaka) regions.

Japanese dialects are divided into two major types, the Tokyo type and the Kyoto-Osaka type. Tokyo type is ‘standard Japanese’ which is what you’ll learn if you memorize a few phrases to get you by. In contrast, Osaka-ben (the dialect in Osaka), consists of fast-talking in a more casual manner.

For example, instead of the well-known arigatou, Osakans will use okini to say thank you.

One particularly useful phrase to know if you’re traveling around Osaka is nandeyanen, which means ‘you’ve got to be kidding’ in a jokey way. Since Osaka has a lot of markets, you can often barter with merchants to lower their costs, and nandeyanen is a great retort if you want to get them to go a little lower.

Don’t worry though, because standard Tokyo Japanese will be perfectly understood in Osaka, so if you’ve memorized a few Japanese terms, they’ll pass just fine. 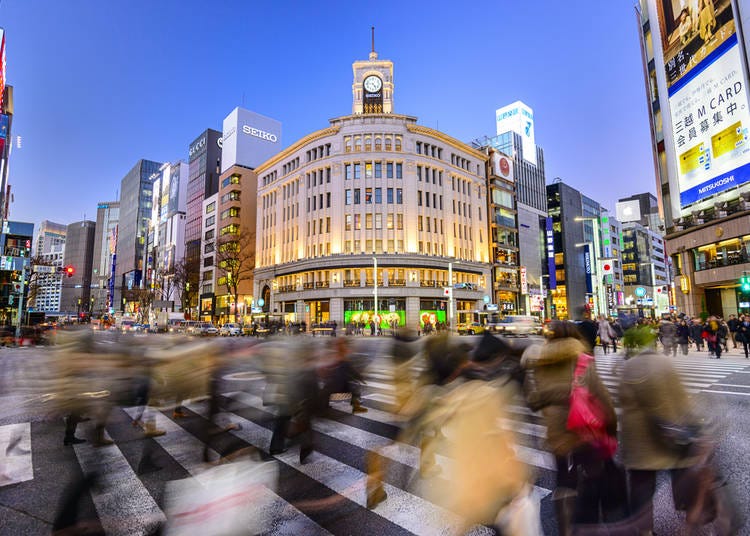 Tokyo
Seems everything is never-ending when it comes to shopping in Tokyo, with a huge selection of stores, arcades, and malls in every ward. It’s not a stretch to say that you could easily spend all day in one of Tokyo’s major shopping districts like Akihabara or in one of the many complexes like Nakano Broadway.

The Shinjuku part of Tokyo is one of the country’s most attractive shopping areas, and is a haven for fashionistas and young people looking for the hottest new items.

Shopping Heaven! Best Outlet Malls and Factory Outlets in and Around Tokyo
8 Best Tokyo Shopping Districts: Where to Shop and What to Buy There!

Osaka
Another ideal destination for a shopaholic, there are only slightly fewer shopping complexes in Osaka only due to its smaller size. The aforementioned Dotonbori area is a shopper’s heaven with a large concentration of department stores and some of Japan’s most extensive underground shopping complexes.

Amerikamura might be Osaka’s most unique shopping district. Don’t let the name fool you; there’s nothing American about it. It’s named because the shops import a lot of goods from overseas, and it’s become a hub of fashion for young people in Osaka.

While Tokyo is certainly a little more expensive than Osaka, don’t forget that the cost of living and worker’s wages are higher in Tokyo too. Osaka has slightly less, but is a little cheaper on the whole. There’s also a big bargaining culture in Osaka, which is perfect for tourists. 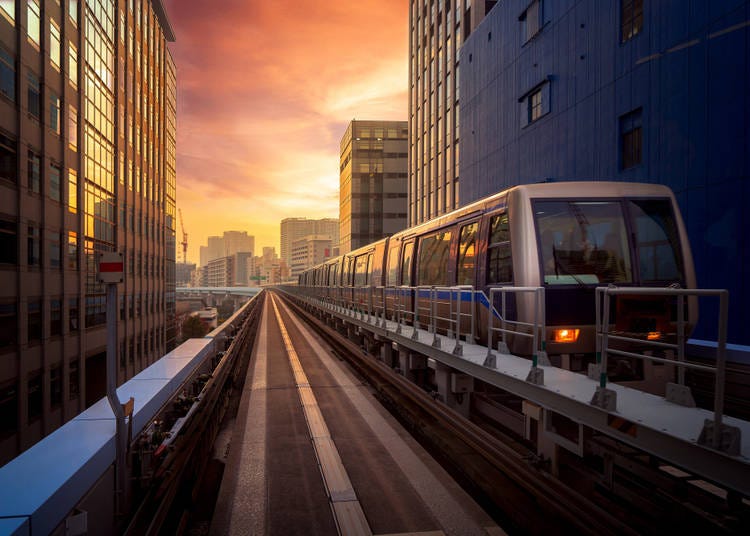 Tokyo
Japan’s extensive public transport system is well-established in both Tokyo and Osaka, so you won’t have any trouble getting around. Driving around the busy areas of either city, especially for a foreign visitor, isn’t recommended. Besides, public transport is so efficient that taking the train is usually quicker than driving.

Both cities are well-connected with rail lines and buses, but Tokyo has a small advantage as a lot of popular tourist destinations are situated along the Yamanote line. As to be expected, with the dense population of Tokyo, trains can get a little busy during peak hours.

Osaka
Osaka is a little less cramped, but still quite hectic.
In Osaka, all of the city’s biggest attractions and day-trip locations are also accessible via rail, since some of the major ones are in the outer districts, they might need a little more planning to get to. If you’re the kind of person who likes to get their walking shoes on and get off the beaten path, getting around Osaka would be a breeze for you.

Simply walking around the hustling streets or the barren backstreets of either Tokyo or Osaka is one of the most enjoyable ways to experience Japan, and you’ll find all sorts of incredible places you wouldn’t find in a guidebook.

Hopefully, this article should help you choose which of Japan’s biggest cities is more suited to you. While Tokyo is the perfect place for a city vacation, Osaka’s proximity to the surrounding Kansai regions means it is ideal for a more well-rounded trip. Regardless of which city you choose, you’re guaranteed to have an experience you won’t forget.

Tokyo VS Osaka: 5 Quirks That Leave Foreign Visitors Scratching Their Heads!
Must Do In Tokyo: Top 8 Places To Visit in Tokyo (1-Day Plan)
Osaka Umeda 1-Day Itinerary: Guide to All the Shopping and Food You Could Want! (With Bonus Deals)
10 Major Cities in Japan: Which One Should You Visit?
*This information is from the time of this article's publication.
*Prices and options mentioned are subject to change.
*Unless stated otherwise, all prices include tax.