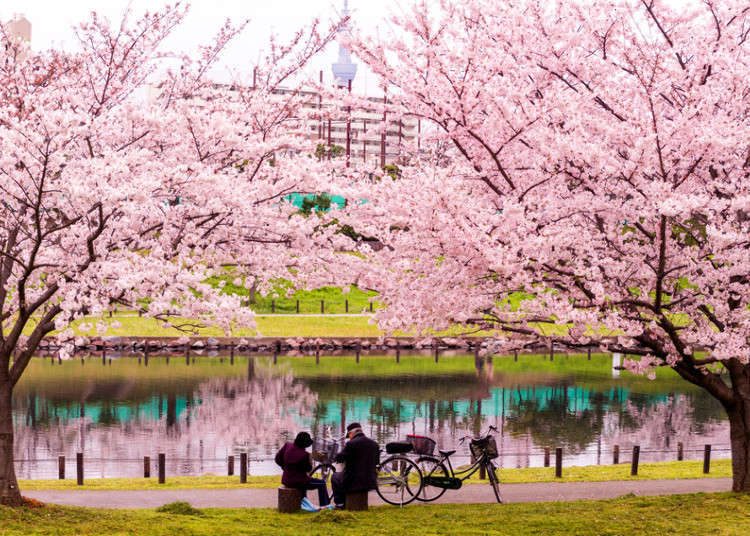 9 Things to Love About Spring in Tokyo

Spring is an ideal time to visit Tokyo. Warm, comfortable temperatures make it the perfect time of year to visit.

Lasting roughly from early March until Japan’s rainy season in early June, the spring season in Japan is characterized by cherry blossoms, seasonal foods, and a large number of both traditional and modern festivals and events.

From flower festivals to fruit picking, lively traditional parades, and picnics, there’s plenty of seasonal fun for anyone in Tokyo during the spring season! 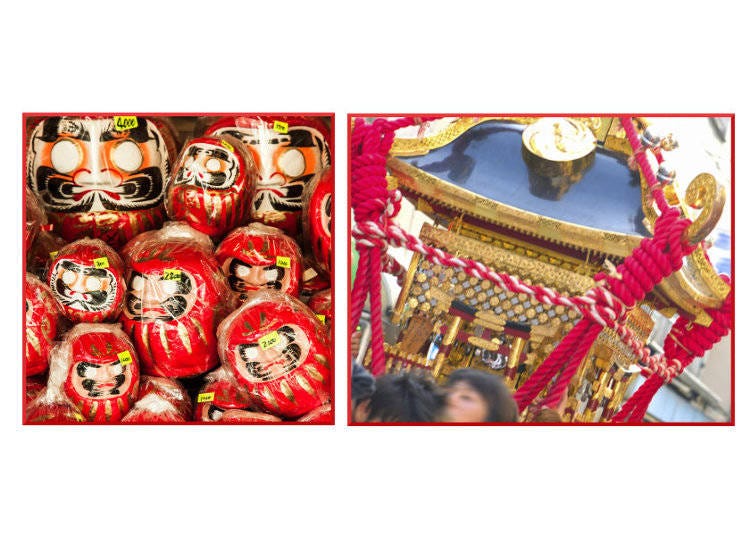 In March, Jindaiji Temple features one of the largest Daruma Doll Fairs in Tokyo, where visitors can buy daruma, the auspicious red dolls representing Bodhidharma, who is credited as being the founder of Zen Buddhism.

In early May, at Asakusa’s Sanja Matsuri, spectators can witness one of Japan’s largest mikoshi (portable shrine) parades, which also features traditional music and dancing.

The bustling Shinjuku district is also home to the lively Hanazono Shrine Grand Festival at the end of May, which includes its own mikoshi, and an array of food stalls.

Hiwatari-sai is a particularly exciting festival located on Mt. Takao, on the outskirts of Tokyo that involves ‘fire-walking’ across hot coals! 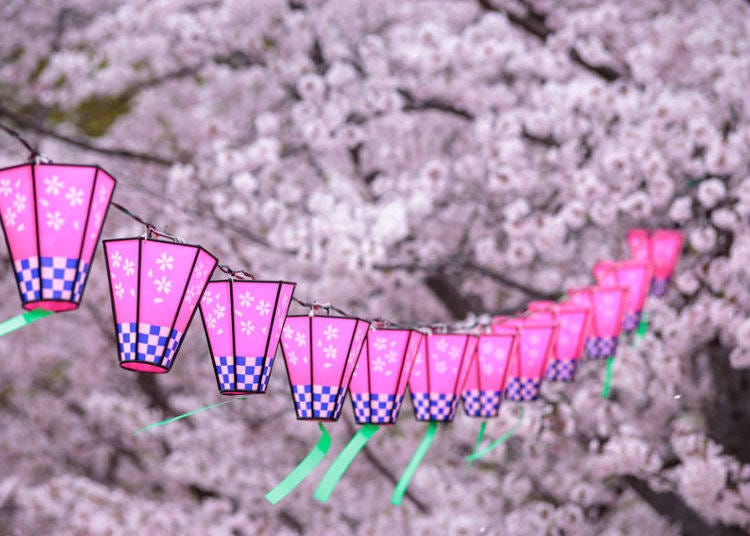 Japan is known for its cherry blossoms, and Tokyo is no exception. Tokyo is filled with many cherry blossom spots to encounter the delicate pink blossoms known as sakura.

For many people in Japan, spring is synonymous with sakura, and this ephemeral phenomenon is celebrated with a practice known as ‘hanami’. While technically meaning ‘flower viewing,’ hanami is most commonly associated particularly with cherry blossoms and involves strolling, picnicking, and general merrymaking under the fragrant and lovely cherry trees.

While Japan's cherry blossom forecast dates may vary each year, in Tokyo, the sakura season typically occurs sometime between early to late April, for a short period of about two weeks – typically one week to reach full bloom, and just another before the blossoms fall to the ground. Japanese people make the most out of this fleeting period by holding sakura festivals in parks and other notable nature spots.

Each spring in Tokyo, thousands of visitors gather in locations such as Ueno Park, Shinjuku Gyoen National Garden, Chidorigafuchi Moat, Meguro River, and Yoyogi Park, and others to enjoy the beauty of Japan’s cherry blossom season. 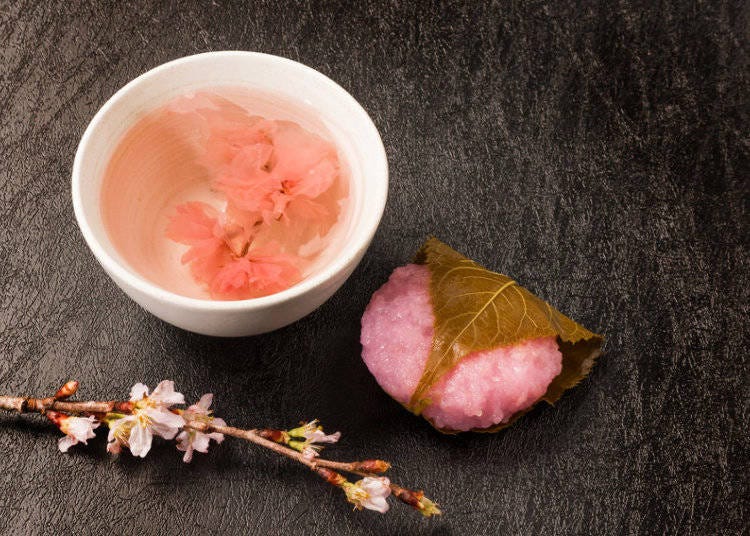 Keeping with the theme of cherry blossom season, spring is also the time that the shelves of Japan’s convenience stores and other shops bloom with seasonally-limited, sakura flavored food and drinks. If you’re out on the town, take a break with a sakura latte while having a munch on some cherry-flavored chocolate. You may also want to enhance your hanami party with some sakura mochi wrapped in real pickled sakura leaves, or sip on a can of cherry chuhai (a popular alcoholic cocktail). Sakura tea also makes for an excellent souvenir that allows you to enjoy sakura all year long. Most anyone in Japan would agree that tasting the sweet cherry blossom flavors is sure to make your sakura viewing even lovelier!

4. Feeling Spring at Parades and Events 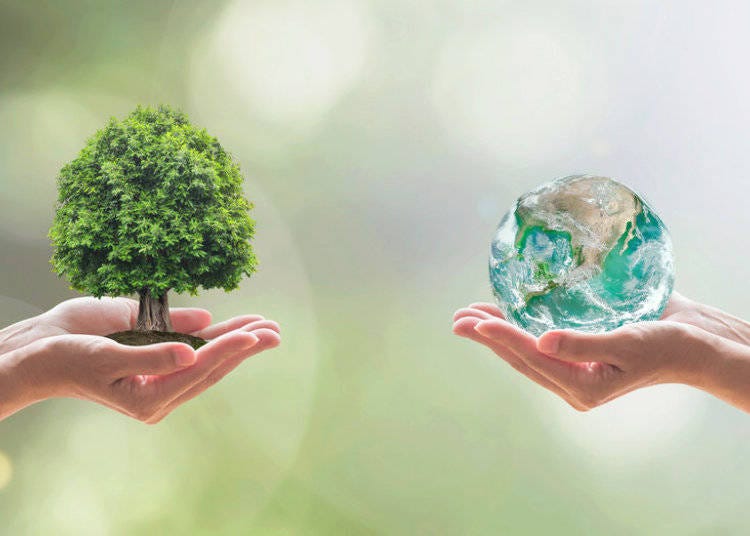 In addition to traditional festivals, there are also plenty of exciting events relating to modern-day Japanese and international culture. So-called ‘otaku’ rejoice each year at AnimeJapan, held at the end of March at Tokyo Big Sight convention center in Odaiba. 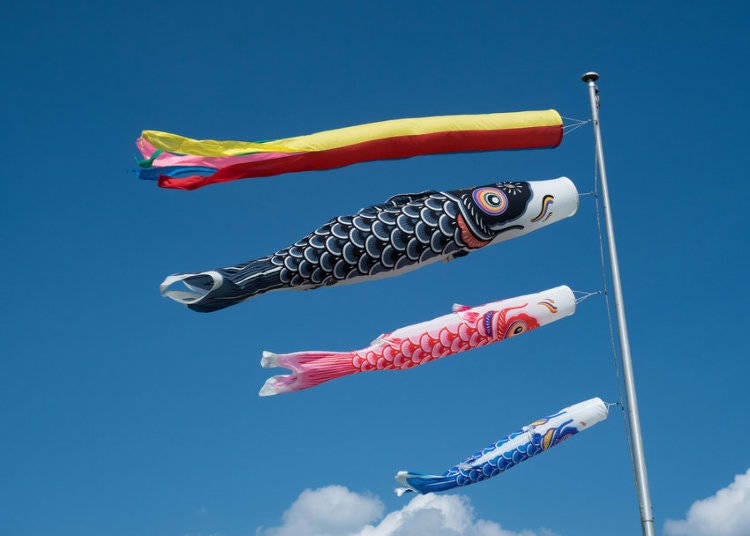 One of the most widely celebrated spring holidays in Japan is Hina Matsuri on March 3. The holiday, also known as Girls’ Day, is celebrated by displaying ornate, traditional dolls, and special eating white, green and pink foods such as a sweetened rice puff called hina-arare and a “scattered sushi” dish known as chirashizushi.

In early May, people in Japan celebrate a string of national holidays collectively known as Golden Week. This includes the holiday Children’s Day (‘Kodomo no Hi’), originally was known as “Boys’ Day,” during which carp streamers (‘koinobori’) are flown and samurai dolls are put on display to celebrate the strength and happiness of children across Japan.

Golden Week is also known for being one of the busiest travel periods in Japan, so if you plan on visiting during this time, make sure to prepare your reservations as early as possible! 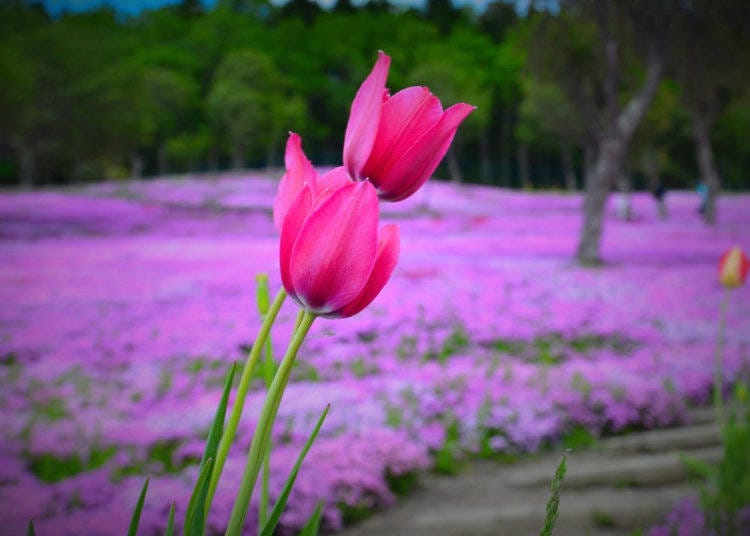 Sakura aren’t the only flowers worth viewing during the springtime in Japan. A rainbow of varieties can be found in gardens and parks, both in and around the Tokyo area. Festivals celebrating these flowers are enjoyed by many in Japan, whether tourists or local residents.

Plum blossoms (‘baika’) are among the first flowers to signal spring's arrival, even before the more famous sakura. Often mistaken for cherry blossoms, baika, which range in color from white, to various shades of pink, and even yellow, are distinguishable by their rounded petal tips.

Later in the season, even more flowers can be seen blooming and beautifying the country during April and May. One of Japan's most celebrated spring flowers is ‘shibazakura’ (moss phlox), which paints a pink carpet across the landscapes featuring these blossoms. The wisteria (‘fuji’), with its distinctive pale purple weeping blossoms, is viewed by many during the spring months, as well as tulips, roses, and a number of other flowers. 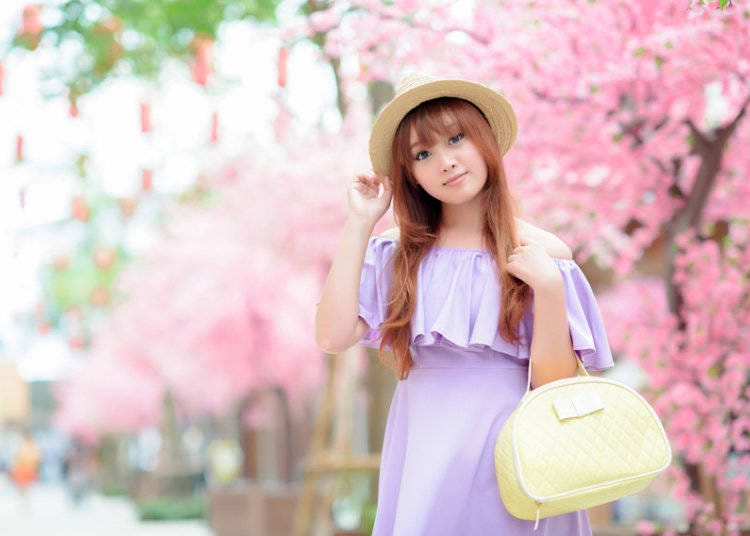 Warm, mild temperatures, low humidity, and relatively little rain make spring an ideal time to visit Tokyo, and very easy to dress for. While spring can still be chilly, particularly at night, visitors need not bring heavy coats nor the rain gear recommended during the tsuyu (rainy season) that typically occurs in June.

It’s also a perfect time to try out some of Tokyo’s latest spring fashions. From understated Ginza elegance to wild Harajuku-inspired looks, Tokyo is sure to have a style that suits you! Hit the shops for clothing, shoes, and accessories.

If, however, you prefer to take a walk on the traditional side, you may want to try wearing an authentic kimono, which can be rented for a few hours, or the entire day in places such as Asakusa.

Wear an Authentic Kimono in Tokyo’s Most Traditional Neighborhood! 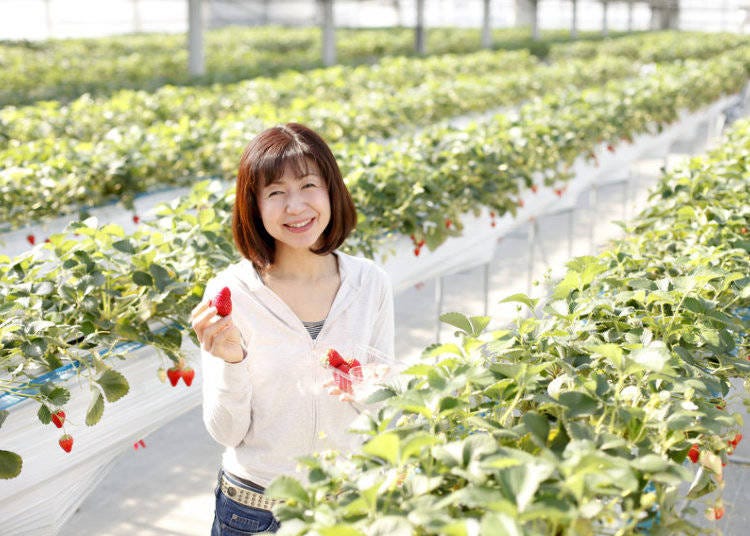 Sweet, tart, and juicy; for many in Japan, strawberry is the fruit that represents spring. Although the season officially begins in winter, strawberry picking is a popular activity even through the spring months.

There are several countryside strawberry farms in Japan, many just a train ride away from Tokyo. Visitors can enjoy all-you-can-eat picking plans, as well as purchasing strawberries to take back.

With many varieties available to pick and taste, you can become a strawberry connoisseur! A visit to a strawberry garden is a delicious and healthy way for adults and kids to spend a spring day in Japan. 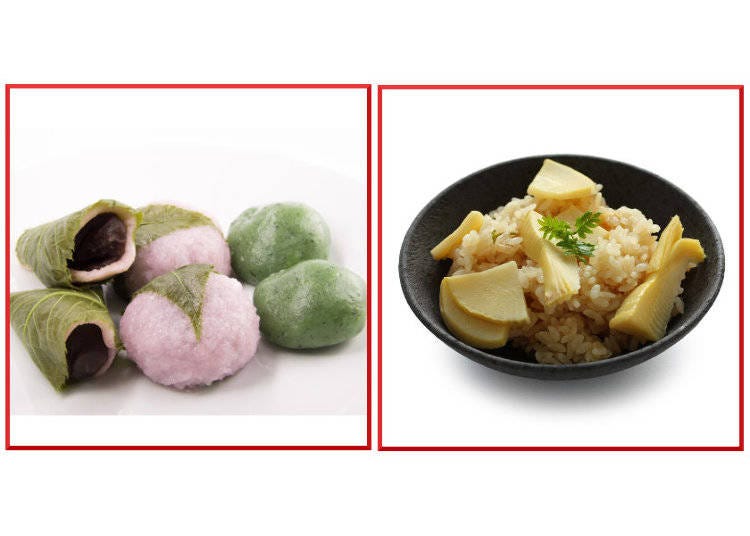 In Japan, the seasons are not only marked by a change in the temperature but the appearance of certain season-limited foods. There are various flavors that bring to mind a spring feeling for foodies and average diners alike.

There are a few types of mochi that are especially associated with spring. Kashiwa mochi is one such sweet; a sweet bean paste-filled rice cake wrapped in a real, yet inedible, oak (‘kashiwa’) leaf. Kusa mochi is another traditional spring mochi made with red bean paste and mugwort, which provides its characteristic green color. Of course, sakura mochi must also be mentioned: a pink-colored sweet filled with bean paste and wrapped in the leaf of a pickled cherry blossom.

One of the foods most associated with the spring season is the bamboo shoot, known in Japanese as ‘take no ko.’ The flavorful vegetable is featured in the rice dish ‘take no ko gohan,’ as well as an ingredient in many other dishes. You may even find it in onigiri (rice balls) sold in convenience stores and supermarkets for easy eating. 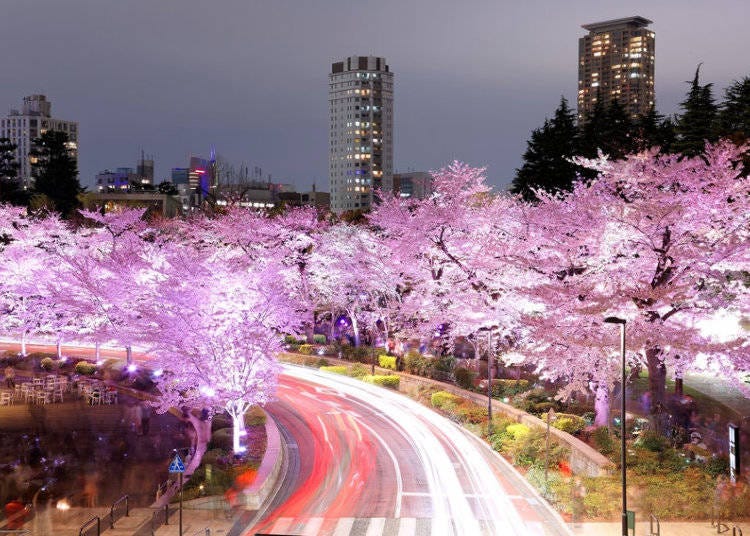 Japan is truly one of the most beautiful places on earth that one can visit in the springtime. If picnicking beneath the cherry blossoms, partaking in exciting festivals and traditions, and eating unique Japanese cuisine featuring seasonal fruits and vegetables is your idea of a dream spring holiday, be sure to travel in spring in Tokyo just for this extraordinary time!

Browse Hotels in Tokyo
Book Now ▶ Browse Top Activities In Japan
*This information is from the time of this article's publication.
*Prices and options mentioned are subject to change.
*Unless stated otherwise, all prices include tax.