HOME Tokyo and Surroundings Tokyo Ueno 32 Things to Do in Ueno Tokyo: Must-see Spots for Sightseeing, Shopping, and Fun! 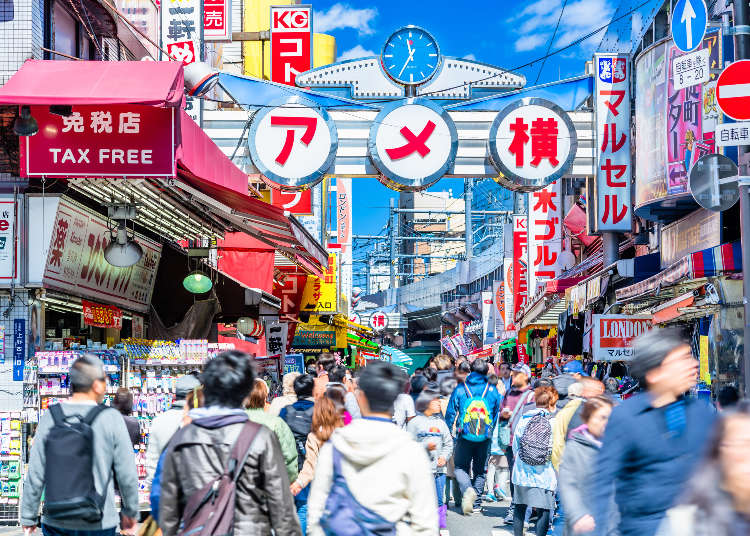 32 Things to Do in Ueno Tokyo: Must-see Spots for Sightseeing, Shopping, and Fun!

Ueno, located in Tokyo's Taitō Ward, has a number of interesting sightseeing spots and is often crowded with local and international visitors alike.

Here is where you'll find Ueno Zoo, which attracts regular attention because of the newborn panda cub, Xiang Xiang; the National Museum of Western Art that was registered as a World Cultural Heritage site in 2016; and Ameyoko Shopping Street for some traditional town shopping fun, amongst plenty of other must-visit spots.

The town is built to be appealing to people from all walks of life, so much so that visitors often find it hard to decide who to bring along for their trip there! Join us as we take a closer look at the popular places of Ueno and see if they live up to the hype!

The roots of Ueno stretches back to the 1880s, in the Meiji Era (1868 to 1912). Ueno Park was, in fact, the first public park to open in Japan in the year 1876, and it currently also houses cultural facilities like an art gallery and museum.

Ever since Ueno Station opened in 1883, commercial establishments and departmental stores have been setting up shop around the vicinity of the station, developing the area further. Eventually, in 1972, Ueno Zoo welcomed adorable pandas into its fold and stirred up a panda boom throughout Japan, cementing the image of Ueno=Panda among the locals.

Ueno is also a veritable shopping paradise with bustling market streets such as Ameyoko, departmental stores like Matsuzakaya, and the ABAB shopping complex. During the year-end season, it is a common sight to find the streets packed with people trying to do their new year shopping, raising the energy level by several notches.

What About Ueno Now?

In recent years, Ueno's art galleries and museums have been the host of several popular exhibitions and priceless pieces, leading to a steady uptick in visitor count. The area received yet more attention again in 2016 when the National Museum of Western Art was registered as a World Heritage Site.

Of late, projects have been underway to support international visitors by providing multilingual signage in the area, cementing its position as one of Tokyo's most accessible must-visit spots for tourists.

For the locals, Ueno is also considered very liveable due to the ease of transportation and relatively low cost of living. On top of that, the area has plenty of entertainment facilities and is just a stone's throw away from natural sights.

Ueno in the Eyes of Foreigners

In recent years, alongside Asakusa in the same Ward, Ueno has become a popular site among international tourists, with an estimated 27.26 million (2016 Taito Ward Visitor Statistics/Marketing Survey) foreign visitors flocking to the area, and this number is set to double within four years.

Ueno is surrounded on all sides by many places of interest that are within walking distance. Specialty items here are available at reasonable prices, so it is an attractive area to walk around in while enjoying the different types of food being sold, making Ueno a place that holds great appeal for tourists just wanting to shop and eat!

Because Ueno was not developed specifically with tourists in mind, it contains uniquely Japanese quirks and charms that can give visitors an insightful glimpse into local life.

Ueno: The perfect place to hone your cultural sensitivities

Rotations of domestic and international art pieces or installations are always on display in each of these museums and the town is well-known as one of Japan's foremost art spots among locals.

If you're looking to hone your cultural sensitivities, Ueno is the town to be!

Ueno: The perfect place for leisurely nature walks as well

The iconic Ueno Onshi Park, also known as Ueno-no-Mori, or Ueno's forest, is an area within the concrete jungles of Tokyo that teems with lush greenery.

There are plenty of popular sakura viewing spots here during springtime, and even if you're visiting during other seasons, Shinobazu Pond's lotus flowers and winter peonies are an equally beautiful sight as well, making this place the perfect spot to enjoy a leisure walk in no matter the season.

For those with children, hop into the first zoo to ever open in Japan, Ueno Zoo, for a fun-filled family outing day. Don't worry about food and drinks, because you'll find eateries located throughout the park, like the familiar Starbucks Coffee Ueno Onshi Park branch, Ueno no Mori Park Side Cafe, Cafe Hibiki, and more!

With everything you need conveniently located in one place, it's not difficult to see why plenty of people find Ueno Park a soothing place to relax in.

Don't miss this popular shopping street with plenty of things to see, eat, shop, and enjoy!

Another well-known "face" of Ueno is the low town area of Ameyoko, or Ameyoko Shopping Street Association. It stretches for about 500 meters (around 1,640 feet) from Ueno Station on the JR Line to Okachimachi Station, also on the JR line, and there are about 400 stores packed into the area.

Needless to say, it's busy all day long with both local and international visitors looking for good deals or to experience the traditional vibe. Products on sale cover a ridiculously wide range. From fresh fish, seafood, fruits, Asian ingredients, candies, and general foodstuff to sneakers, bags, accessories, and other fashion trinkets, you can find virtually anything under the sun!

There's so much variety here that just walking through the area and looking at what's on sale can be a fun activity in itself. This is also a great place to eat as you walk.

Scattered about at reasonable distances from each other are food booths selling croquettes, takoyaki (octopus dumplings), yakitori (grilled skewered chicken), and other local Japanese delights. If you're feeling like a more international fare, you won't be disappointed!

Just head over to the booth next door selling kebabs, Chinese dim sum, bubble tea, and other specialty foods from all over the world. It's not every day you get to taste the world without leaving town, so this activity comes highly recommended from us!

What Areas Are There in Ueno?

The tourist hot-spots around Ueno Station are very close to each other and conveniently accessible on foot.

Within Ueno Station (JR Lines) and Its Vicinity
Ueno Station is a large complex served by many conventional train lines as well as the Shinkansen. Within the fare gates, you'll find "ecute", a shopping area selling bento (lunchboxes), sweets, sundries, and other goods. The terminal building Atre Ueno is directly connected to the station and contains a supermarket and plenty of shops selling fashion wear. The truth is, just walking around the vicinity of the station is probably enough to satisfy most people's shopping needs! Ueno Park is located just beyond the Koen Exit, while the Shinobazu Exit will take you to Ameyoko, and Hirokoji Exit, the Marui building.

Ueno Park
When you step out of Ueno Park Exit of the JR Lines, you'll find yourself looking at the vast expanse of Ueno Park, which is almost directly connected to the station itself. Within the park premises are 12 cultural facilities, including a museum and an art gallery. Ueno Zoo - famous for its panda exhibit - is also housed within the park, along with historical shrines such as Ueno Tōshō-gū and Kiyomizu Kannon-dō. With so many buildings detailing Ueno's culture, arts, and history gathered at one spot, this is a place you don't want to miss if you're visiting the area.

Ameyoko Shopping Street / Okamachi
This stretch of road about 500 meters (1,640 feet) long just below the overpass that connects Ueno Station and Okamachi Station on the JR Line together is where you'll find the heart of Ameyoko Shopping Street. The shops here offer a wide variety of wares for your perusal - foodstuff, sundries, jewelry, branded goods, cosmetics, and much more for amazingly low prices. Every shop has an energetic vibe to it and the mood of a quaint old Japan is still present here. Walking along major stores like Yodobashi Camera interlaced with an interesting variety of eateries, discount stores like Takeya Select, and established departmental stores like Matsuya will make for an interesting experience, to say the least!

How Do I Get to Ueno?

Ueno is located in Taito Ward, which is on the eastern side of central Tokyo. Many major transport routes go through the area and it is readily accessible by public transportation as well. The area around Ueno Station is especially prosperous.

By Train
Ueno is a major terminal station that is connected to a major expressway route. In fact, it wouldn't be an exaggeration to call it the gateway to the capital from northern Japan. Access to Chiba, Saitama, and other Kanto precincts is very good, and the Shinkansen stops here as well.

Going to Asakusa? It'll take you about five minutes using the Tokyo Metro Ginza Line, or you could take a slow stroll there on foot instead! Since Ueno is well-connected to popular sightseeing places like Ginza, Shibuya, Omotesando, Roppongi, Akihabara, and Tsukiji, using it as a base of operations for your Tokyo trip would be a wise choice as well.

By Bus
Municipal buses will provide access to different Tokyo precincts. Tobu Bus also provides a sightseeing Skytree Shuttle® that connects you directly to Tokyo Skytree®, or you can choose to hop on the Megurin, a sightseeing tour bus that will take you around Taito Ward. This is where many long-distance buses from places farther west such as Kyoto and Osaka disembark their passengers, so it's a convenient interchange not just for international tourists, but local visitors as well.

As you can see, the multifaceted Ueno area certainly deserves more than a footnote in your itinerary, with its contemplative art spots, natural parks, and shopping streets with old souls. In fact, depending on the season you visit, there may be other pleasant surprises awaiting you there too, so don't be afraid to go out there and explore the area to your heart's content! "Your" Ueno is out there, waiting to be found!

Snack-Walking in Ameyoko Market: 4 Food Stalls in Ueno and Okachimachi You Can Try with Just One Coin!
Great Prices: 3 Best Restaurants in Ueno For All-you-can-eat Wagyu Yakiniku!
Tokyo Ueno Park Complete Seasonal Flowers Guide: Where to see Cherry Blossoms, Lotus and More!
Ueno Tokyo: Top 7 Recommended Spots In Tokyo's Souvenir Shopping and Sightseeing Paradise!
Ueno Food Recommendations: 3 Take-Out Shops in Ueno Loved by Locals
*This information is from the time of this article's publication.
*Prices and options mentioned are subject to change.
*Unless stated otherwise, all prices include tax.