HOME 12 Japanese Street Foods You Must Try When Visiting Japan! 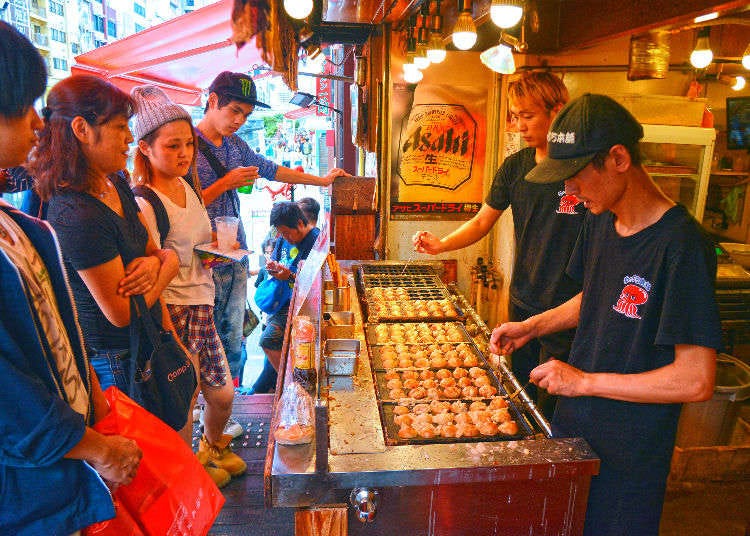 12 Japanese Street Foods You Must Try When Visiting Japan!

Japan is a country filled with delicious eats and Japanese street food is especially appetizing - especially in summer!

Yattai are small food stalls that can be found along Japanese streets and at festivals and you don’t want to miss out on the food they offer! These vendors offer an accessible and tasty selection of on-the-go dishes that are cheap, yet high-quality and delicious.

Just be careful not to get carried away by the incredible variety. Here are 12 Japanese street foods you'll want to try when visiting Japan! 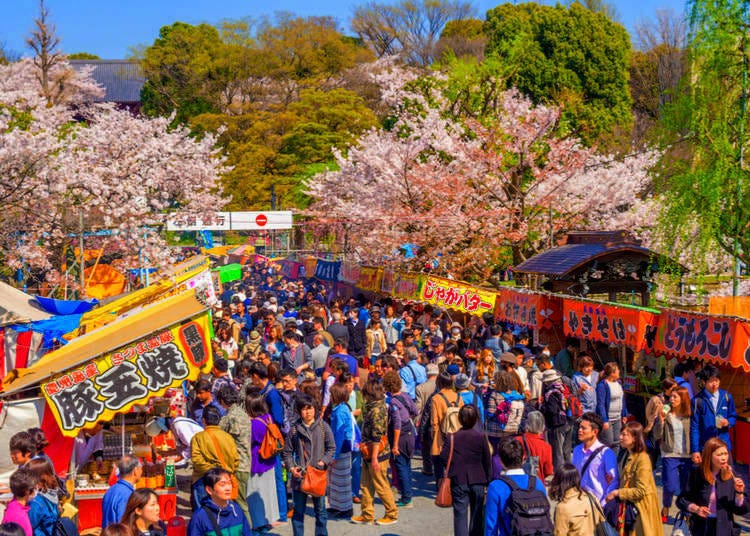 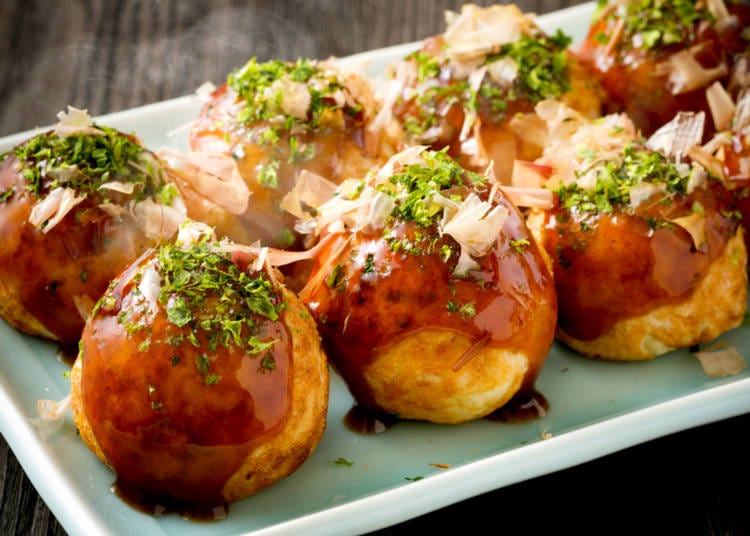 1. Takoyaki
Takoyaki are golden balls of fried batter filled with little pieces of octopus, tenkasu (tempura scraps), benishoga (pickled ginger) and spring onion. Originally from Osaka, the dough balls are fried in special cast-iron pans, and you can watch on as takoyaki vendors skillfully flip the balls at a rapid pace using chopsticks. The cooked takoyaki are eaten piping hot, slightly crisp on the outside, gooey on the inside, and slathered in Japanese mayonnaise, a savory brown sauce similar to Worcestershire, aonori (dried seaweed) and katsuobushi (dried bonito fish flakes). Although originating in Osaka, takoyaki are now widely enjoyed in Tokyo and across the rest of Japan.Takoyaki are incredibly tasty and addictive - just be careful not burn your tongue! 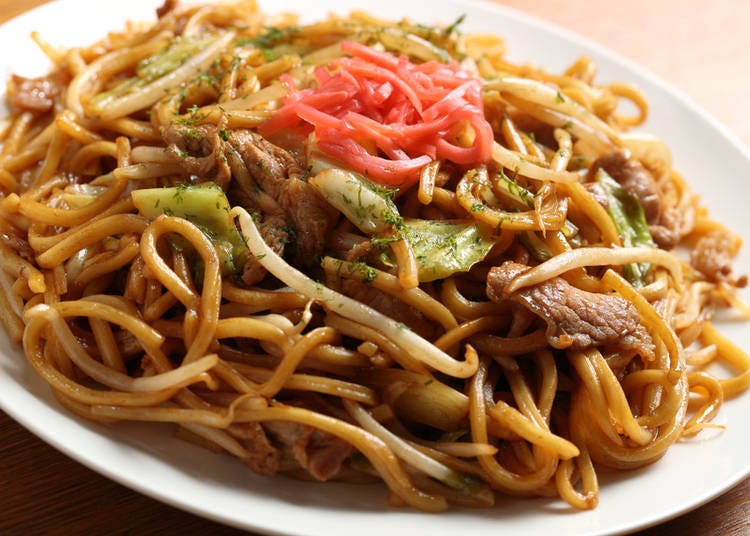 Yakisoba is a very tasty street food in Japan

2. Yakisoba
No Japanese festival would be complete without the familiar sizzling of yakisoba. Relatively easy to make, this is a standard food item at any place where yatai are gathered. Wheat noodles, pork, cabbage, and onions are fried on a griddle, then topped with benishoga, katsuobushi, aonori, a squeeze of Worcestershire sauce, Japanese mayonnaise, and occasionally, a fried egg. The deeply savory flavors of this dish give it wide appeal. 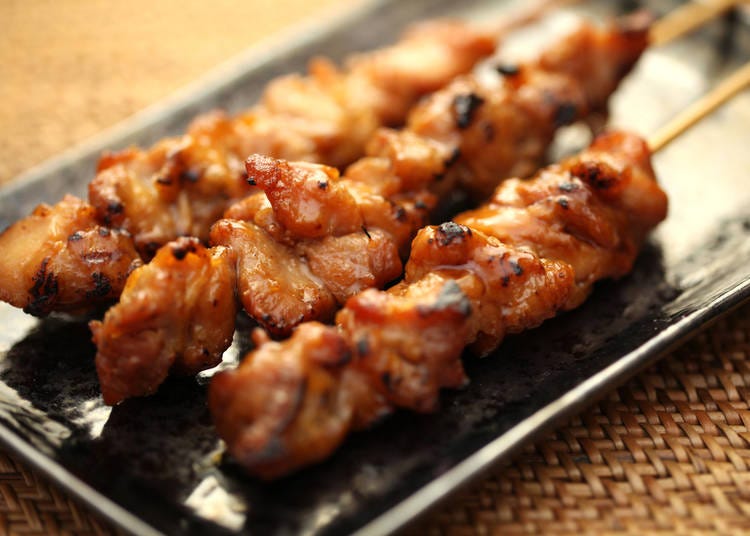 Yakitori chicken skewers can be found at Japanese food stalls

3. Yakitori
A truly classic Japanese treat, yakitori are chicken skewers that are grilled over charcoal and can be found all over Japan. Yakitori is made from all parts of the chicken, such as the thigh meat, tail meat, and even the skin, each with their own unique flavor. The most common seasonings are tare (soy grilling sauce) and shio (salt), but wasabi, umeboshi (sour pickled plum paste), and karashi (Japanese mustard) can also be found at yakitori stands. There are also variations such as negima yakitori - pieces of juicy chicken thigh and green onion, and tsukune (chicken mince) mixed with other flavorings. Although chicken is the most common variety of skewered meat, pork and beef may also be available. 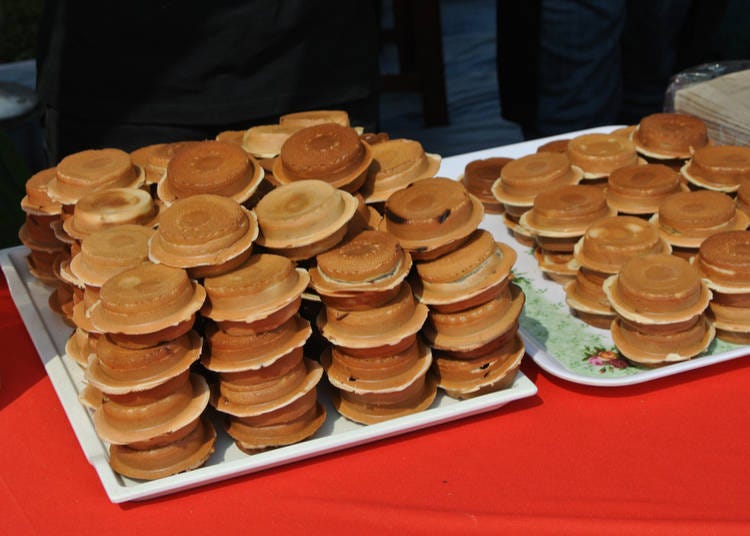 Imagawayaki are a Japanese street sweet

4. Imagawayaki
Imagawayaki is a sweet Japanese street food treat that is made from a batter of eggs, flour, sugar, and water that is ‘baked’ in disk-shaped molds. The end-product is a golden, bite-sized sponge filled with either anko (red bean paste), chocolate, or custard. Named after an Edo-era bridge in Tokyo where they were first sold, imagawayaki is known as taiko-manju in the Kansai region. 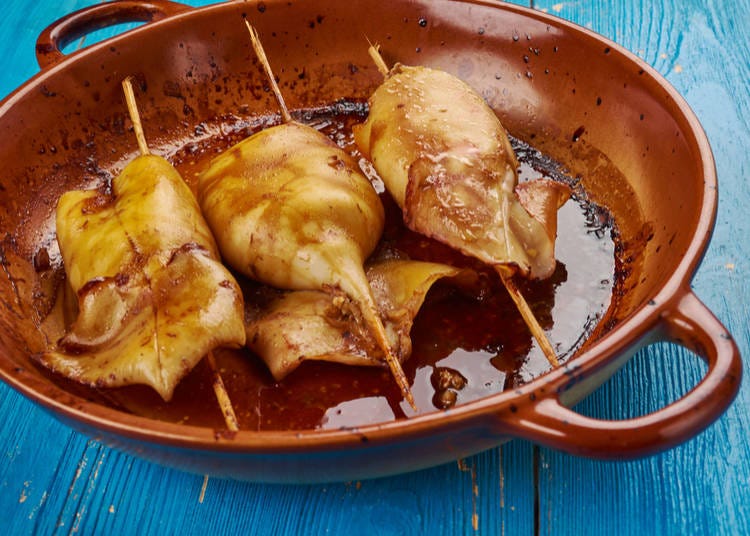 5. Ikayaki
Though whole-grilled squid on a stick may not sound like the most glamorous or appealing snack to some, Japanese street food chefs have mastered bringing out the best in a simple concept. Fresh, tender squid is grilled over charcoal, given a generous coating of shoyu (soy sauce) and served with a slice of lemon or lime. The chewy texture unique to squid meat is a must-try for those who haven’t. Ikayaki is a meaty and flavorful meal-on-the-go that is ready to order almost instantly. 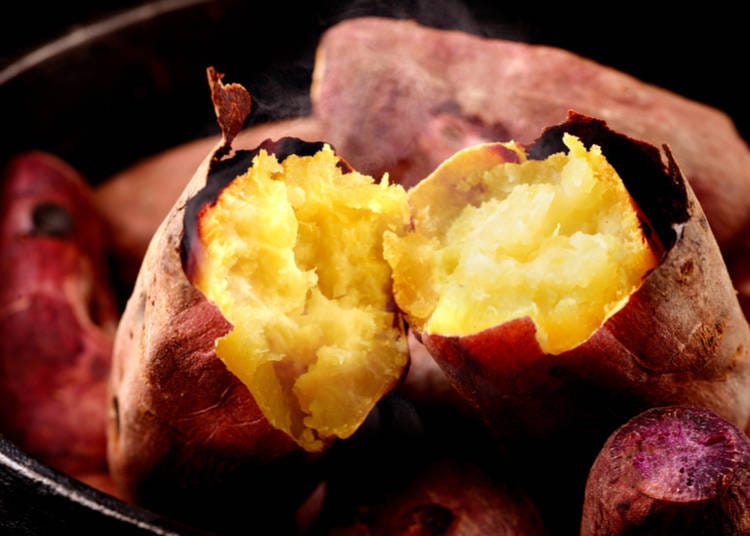 6. Yakiimo
For a taste of old-world Japan, try yakiimo. Satsuma-imo (a type of Japanese sweet potato) are baked over a wood fire and served in brown paper packets. Bite through the pleasantly chewy skin of yakiimo to the soft, fluffy flesh, which has a caramel-like flavor. Though more of a warming autumn or winter snack, yakiimo can also sometimes be found in other seasons. Not only are these snacks sold at festivals and the like, they are traditionally sold straight from a yakiimo truck which sometimes drives around searching for potential customers. To locate a yakiimo vendor, follow the sweet aroma of potatoes wafting down the street, or keep your ears pricked for the signature song played vendors to lure in passers-by.

Instead of Ice Cream Trucks Japan Has... Hot Potato Trucks? 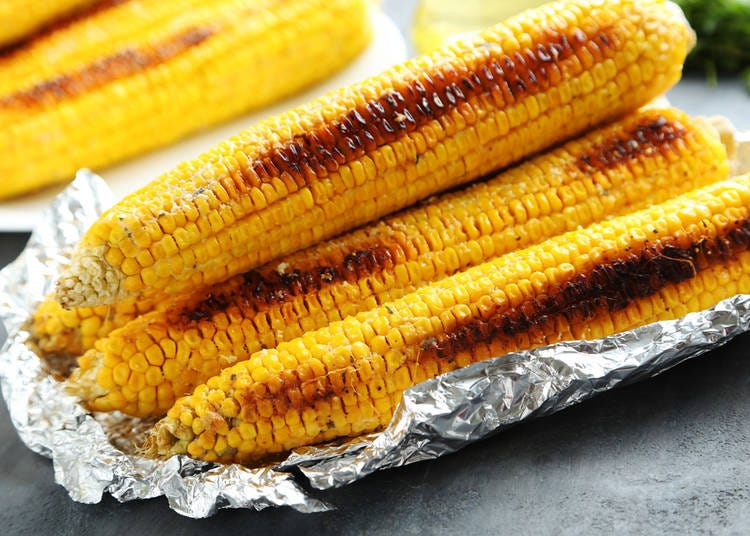 7. Yaki Tomorokoshi
Yaki tomorokoshi are char-grilled whole cobs of corn brushed with a glaze of soy sauce, mirin, and butter, which give the corn a sweet, savory and creamy depth. Corn is at its peak during summer, and during this season yaki tomorokoshi can be found commonly at yatai in Japanese streets and at festivals. Grilled corn can offer a lighter, healthier Japanese street food option from the other fried and sugary snacks. 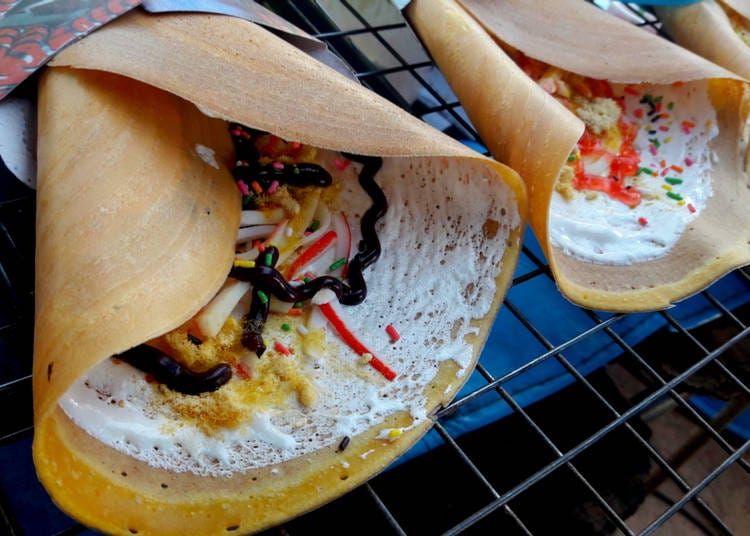 8. Crepes
Originally a French dessert, crepes have been wholeheartedly adopted by Japanese cuisine and adapted to Japanese tastes. Crepes have also become a popular street food snack in Japan, made famous by Tokyo’s buzzy Harajuku neighborhood. Crepes are made from a batter that is cooked on a griddle then filled with sweet ingredients like whipped cream, chocolate, fruit, and even ice cream, folded into a cone shape and wrapped in a paper case for ease of eating on the go. Nowadays, these are not only sold in yatai, but in stores in malls and other shopping locations. We recommend you try the classic yatai style first though! 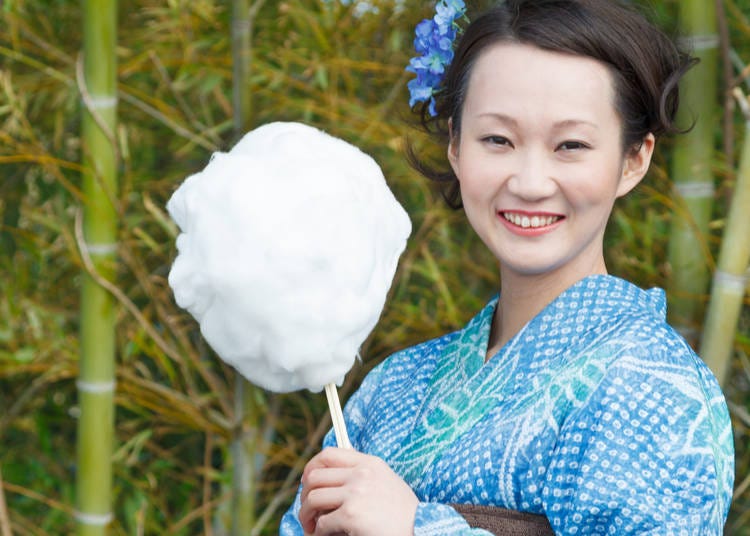 9. Wataame
If you’re in need of satisfying your sweet tooth, look no further than wataame. Wataame (also called watagashi), is cotton candy and can be found at Japanese street food stalls and festivals all over Japan, where you can watch the cotton candy being spun around a stick, or buy ready-made cotton candy in packets that are often decorated with manga characters. This novel treat is especially popular with children. 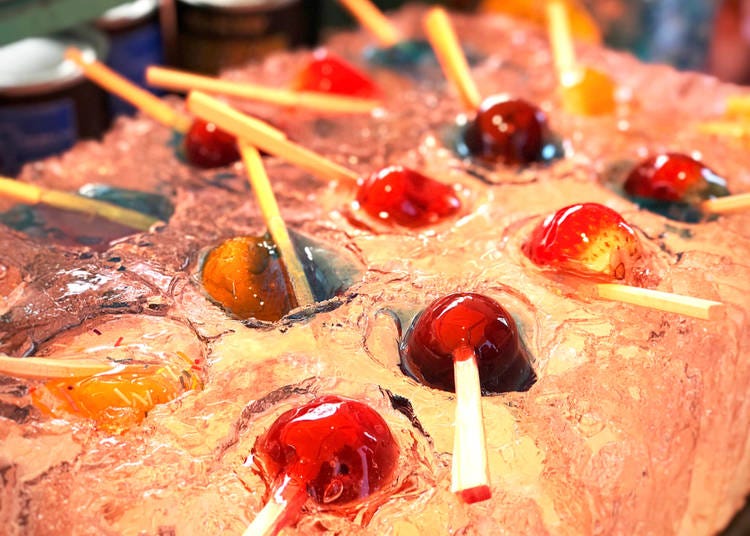 10. Candied Fruit
A street classic everywhere, candied fruit can be found across Japan and in many variations. From anzu ame (candied apricot) to ringo ame (candied apples), these various fruits dipped in candy syrup will leave you wanting more. You should especially try ichigo ame (candied strawberries) at the height of strawberry season for a true Japanese treat or, if you can find it, the rarer mikan ame - a mandarin native to Japan. 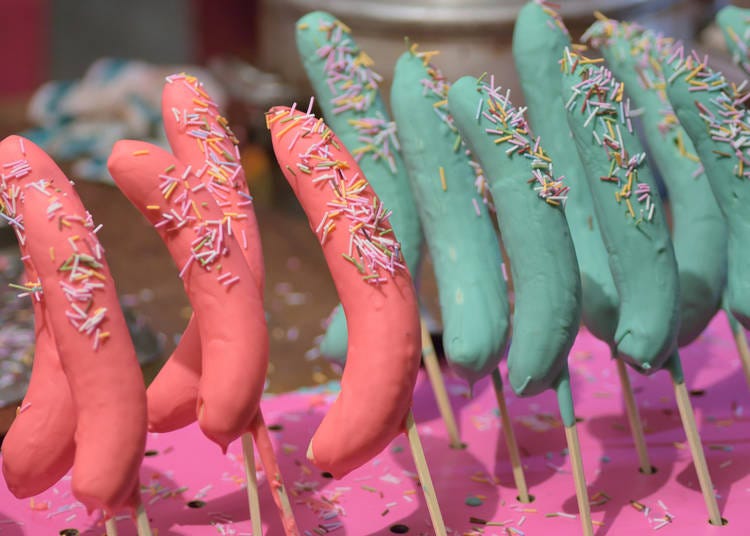 11. Choco Banana
This playful dessert-style street food leaves no surprises with its name - a banana coated in chocolate! The chocolate may be milk, dark or white, and is often dunked in colorful sprinkles. Minus the ice cream, it’s like a banana split on-the-go! 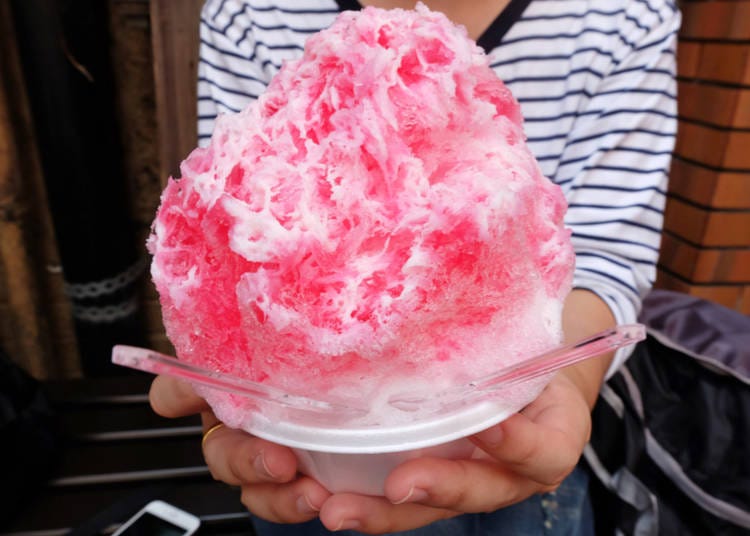 12. Kakigori
You may think you’ve tried this treat before, but think again! Although similar to its western shaved ice counterpart, kakigori often comes in unique flavors such as matcha green tea and lemon and is topped with anything from sweet red beans to mochi (pounded rice), jelly and whipped cream. The end product comes out to be a quite hearty dessert! If you truly want to experience Japanese culture, try eating kakigori while wearing a yukata under a fireworks-filled sky during a Japanese festival in the summer. Now that’s how to do festivals in Japan right!

So there you have it - diverse, delicious and affordable, Japanese street food is a great introduction to the cuisine of a country famed for its food. Now that you know the goods, go find a festival or yatai, grab a bite here and there, and a drink to go, and you’ll be feeling like a local in no time.

Related: Easy-to-make Japanese Recipes!
15 Delectable Japanese Pork Dishes You Have To Try!
*This information is from the time of this article's publication.
*Prices and options mentioned are subject to change.
*Unless stated otherwise, all prices include tax.