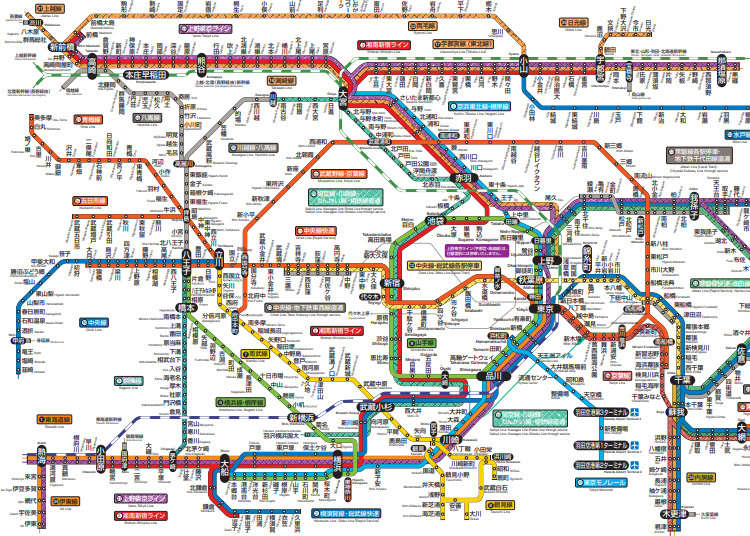 Looking at a map of central Tokyo’s train and subway system can seem like looking at a messy ball of yarn. It’s a complicated web of JR East and other private railway companies, including subways – it intertwines seemingly endlessly, making it hard to understand for anyone who’s not a local.
In this guide, we’ll help you understand and confidently navigate Tokyo’s complex train system. Let’s take a look at the number of train lines in Tokyo, what kind of lines there are, which of them are the most convenient for sightseeing, and so on. 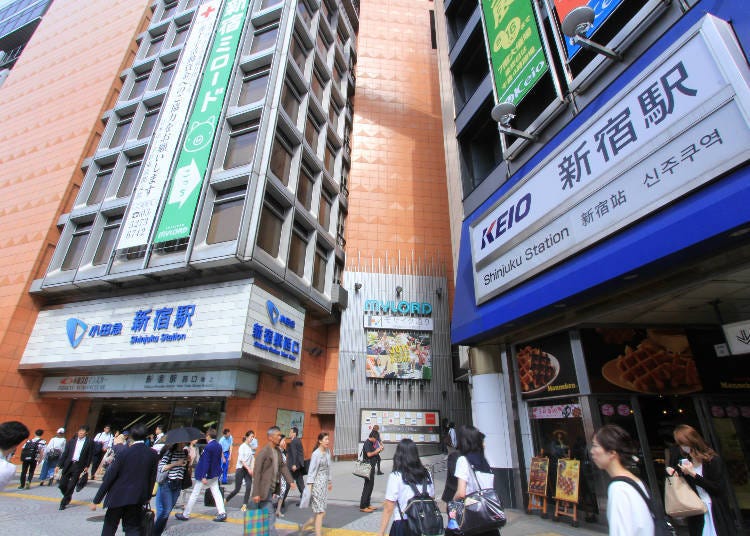 Japan’s railway can be divided into three categories: JR, subway, and other private railways.
JR stands for “Japan Railway” and once was the national railway but is now a private company. Tokyo’s subway is split into Tokyo Metro operated by Tokyo Metro Co., Ltd. and Toei Subway operated by the Tokyo Metropolitan Bureau of Transportation. Then there are seven private railway companies: Odakyu Electric Railway, Keio Corporation, Keikyu Corporation, Keisei Electric Railway, Seibu Railway, Tokyu Corporation, and Tobu Railway. Additionally, there’s also the Tokyo Monorail that runs between Haneda Airport and Hamamatsucho, the Yurikamome Line that is convenient when going to the Odaiba area, and Tokyo Waterfront Area Rapid Transit’s Rinkai Line.
Large stations such as Shinjuku Station, Ikebukuro Station, Tokyo Station, Shibuya Station, and so on are served by multiple lines and allow convenient transfer between the different railway companies without having to leave the station. 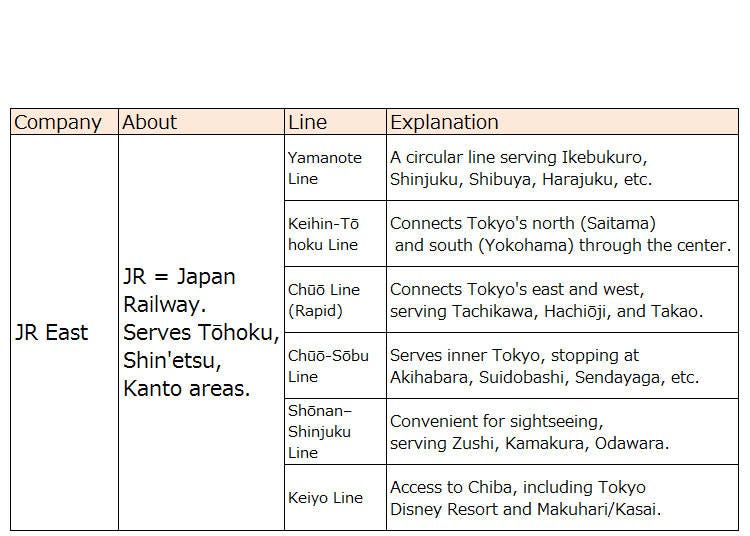 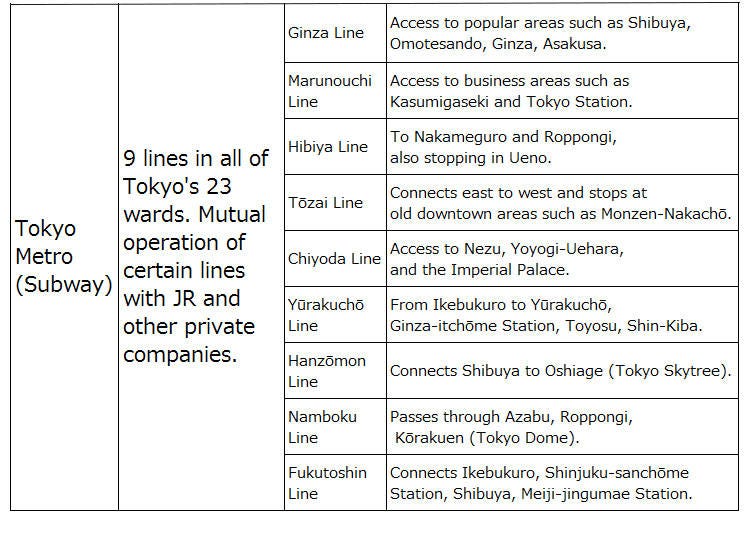 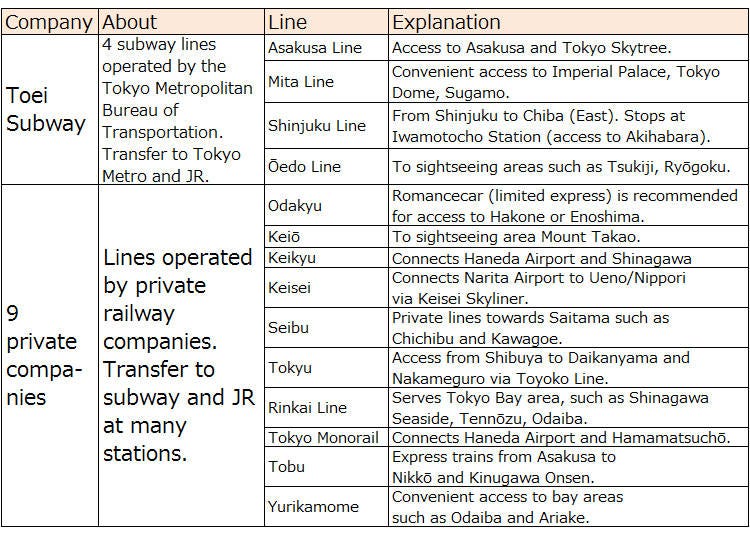 Stations Near Popular Sightseeing Spots and Their Lines 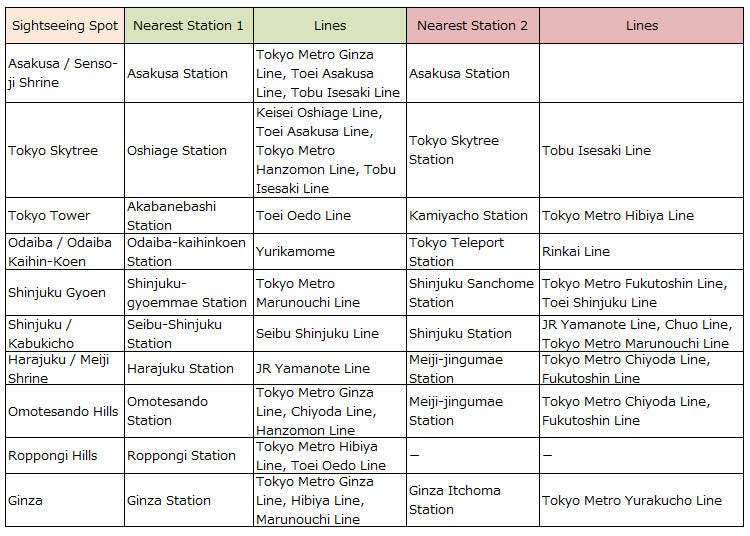 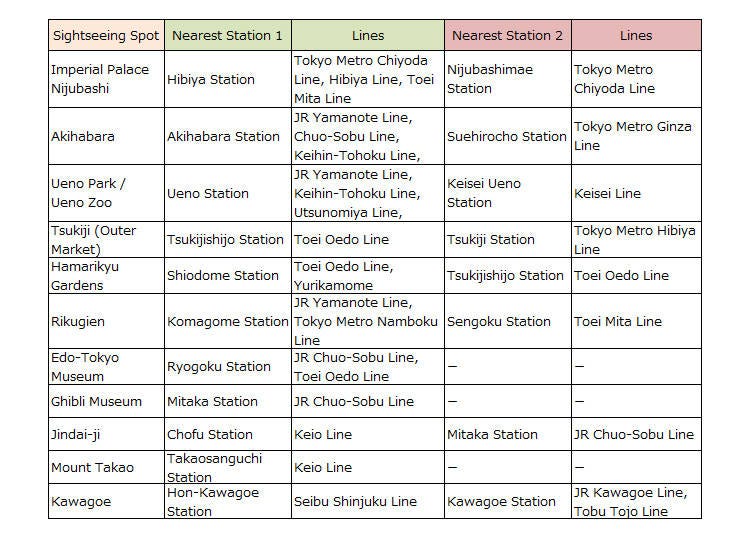 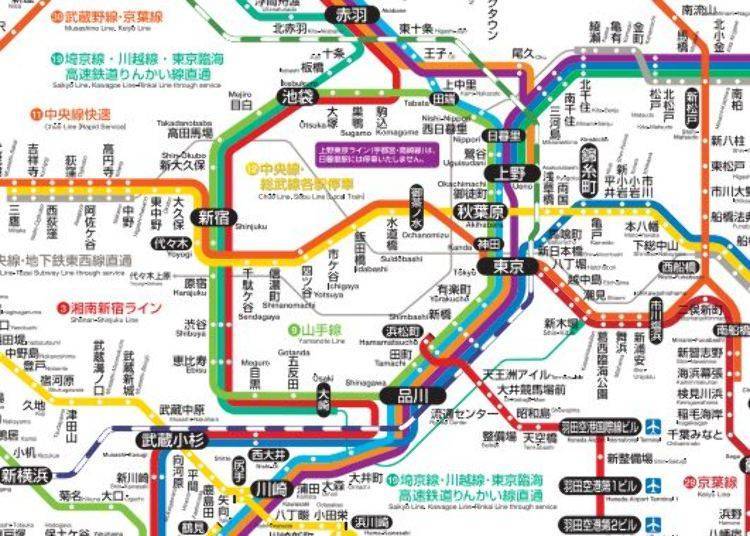 JR East doesn’t only operate the Yamanote Line, Chuo Line, and the Keihin Tohoku Line, but also the Narita Express. While sightseeing in Tokyo, you’ll find yourself using the Yamanote Line quite often. If you plan on going to Tokyo’s suburbs and outer areas, limited express trains are recommended. 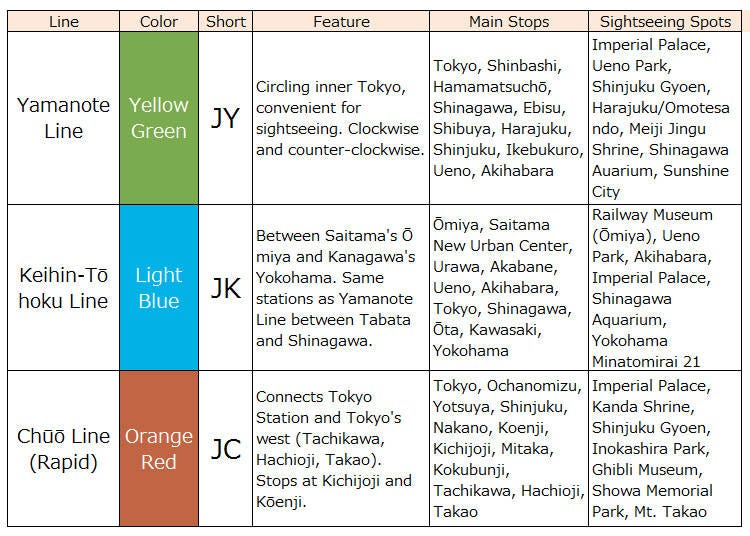 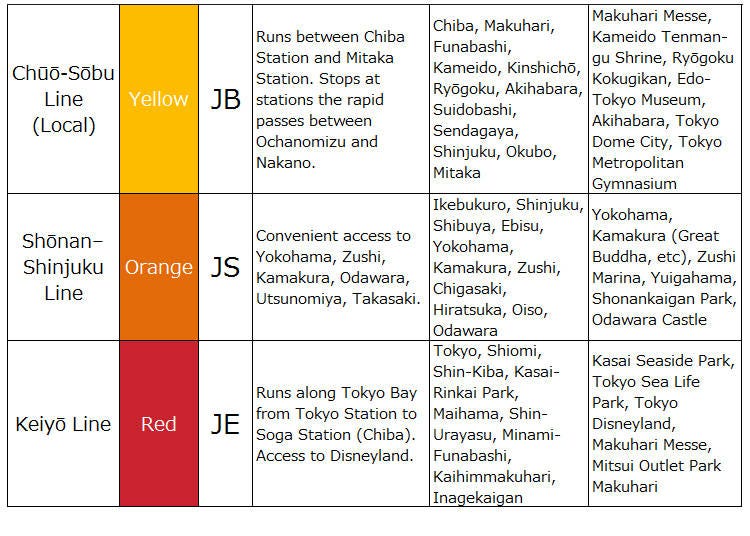 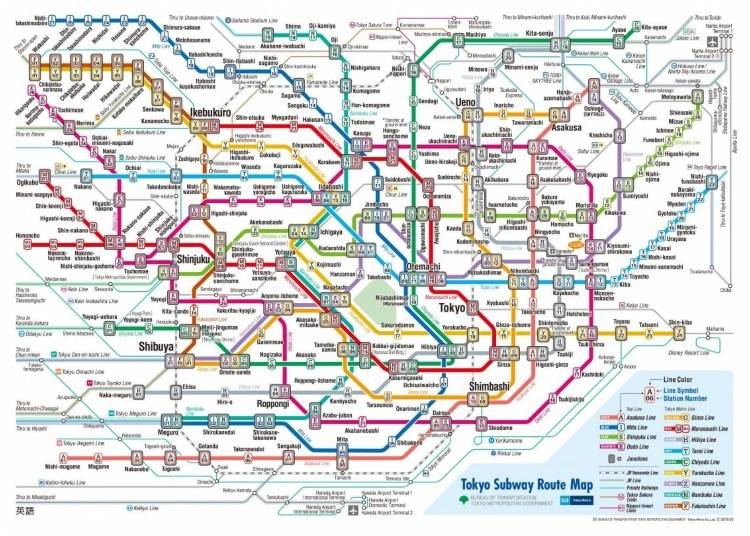 Tokyo Metro almost covers the entire area of Tokyo’s 23 wards with 9 lines. This includes convenient sightseeing lines such as the Marunouchi Line or the Yūrakuchō Line that go around the Imperial Palace, as well as the Hanzōmon Line that takes you to shitamachi (old downtown) areas in the east.
Tokyo Metro also offers the very convenient “Tokyo Metro 24-hour Ticket” for 600 yen, as well as a lot of reasonably priced special tickets in collaboration with other railway companies, 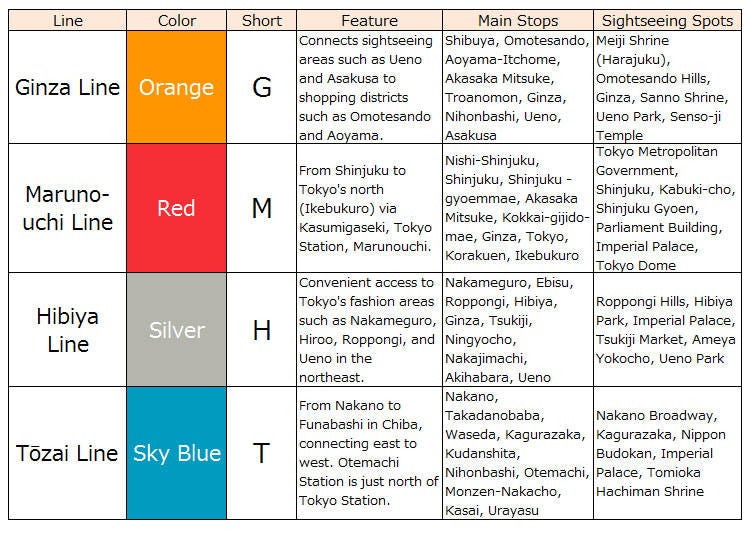 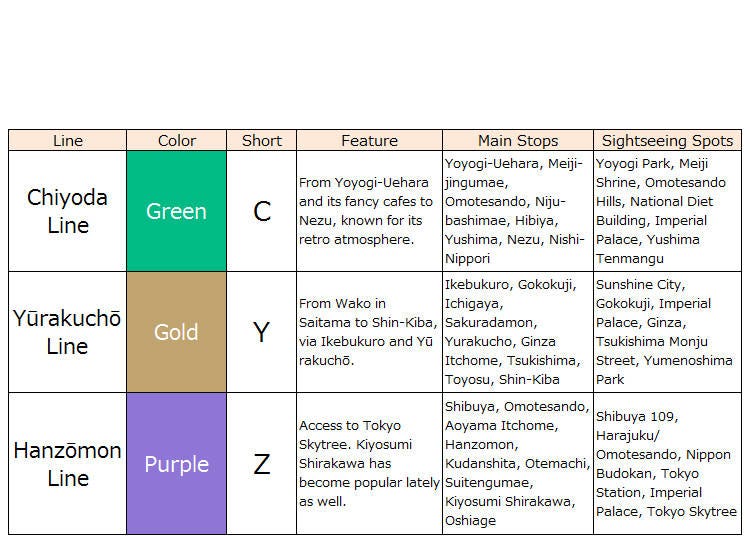 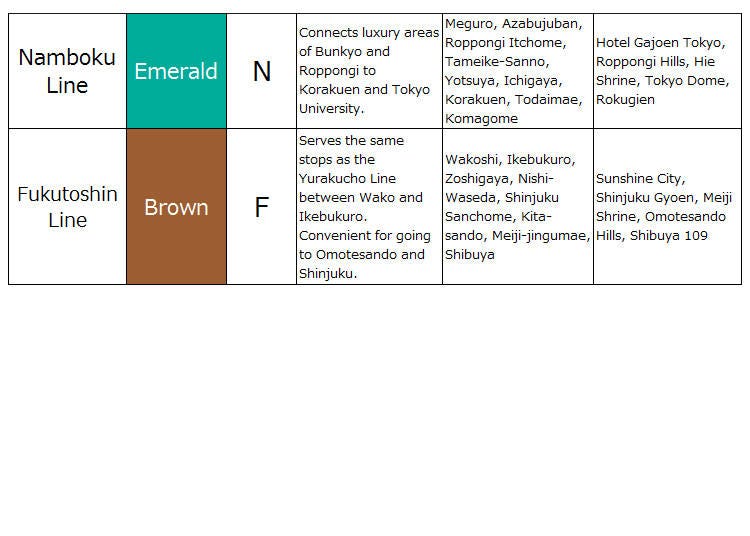 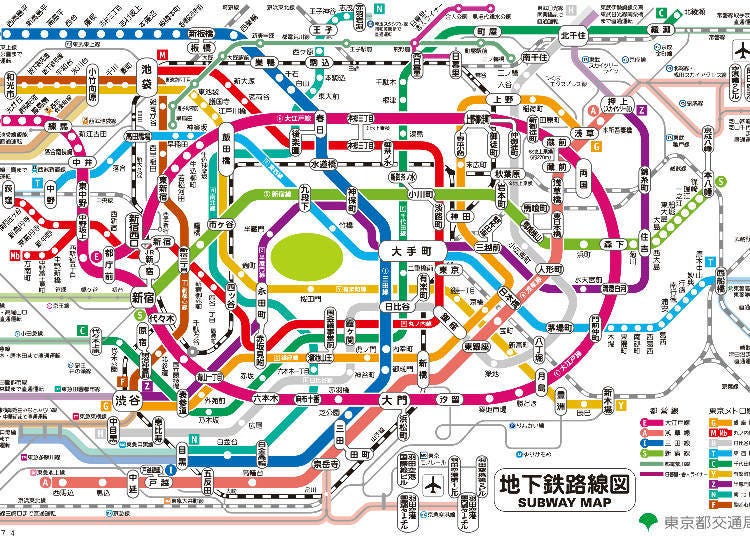 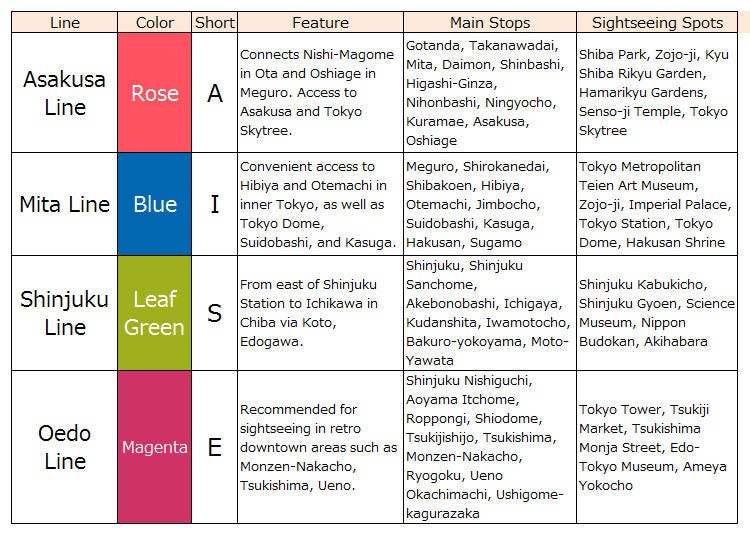 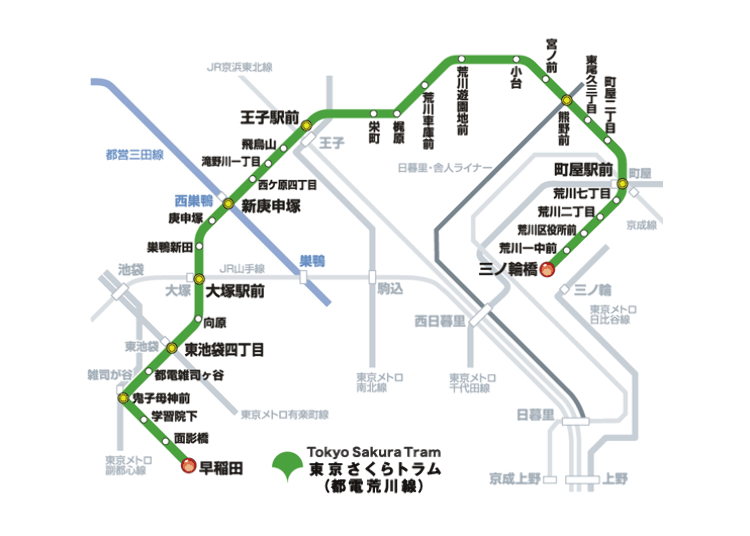 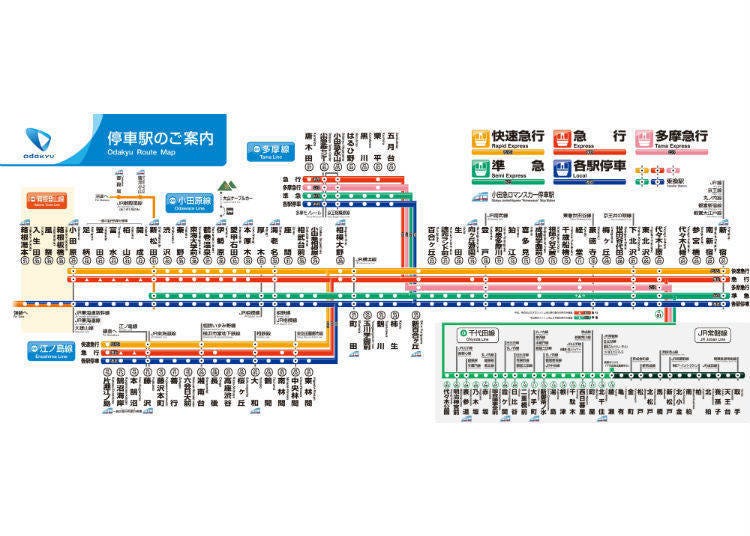 Odakyu Electric Railway operates 3 lines that all start at Shinjuku Station. The Odawara Line takes you to Odawara, which is the gateway to the popular sightseeing area Hakone, while the Enoshima Line offers direct access to Enoshima. Finally, the Tama Line goes to Tama New Town.
All lines feature local trains, express trains, limited express trains, and so on, but especially convenient for visiting Hakone, Enoshima, and Kamakura is the Limited Express Romancecar. It takes you to Hakone-Yumoto Station in 85 minutes and the seats can be rotated all the way around, perfect for savoring the scenery outside the window.
For exploring the Hakone area thoroughly, the Odakyu Line round-trip ticket called “Hakone Free Pass” is recommended, as it includes 8 different trains, lines, and other transportation, such as the Hakone Tozan Railway, the cable car, the ropeway, sightseeing boats, and so on. (Valid for 2 days from Shinjuku Station, 5,140 yen). 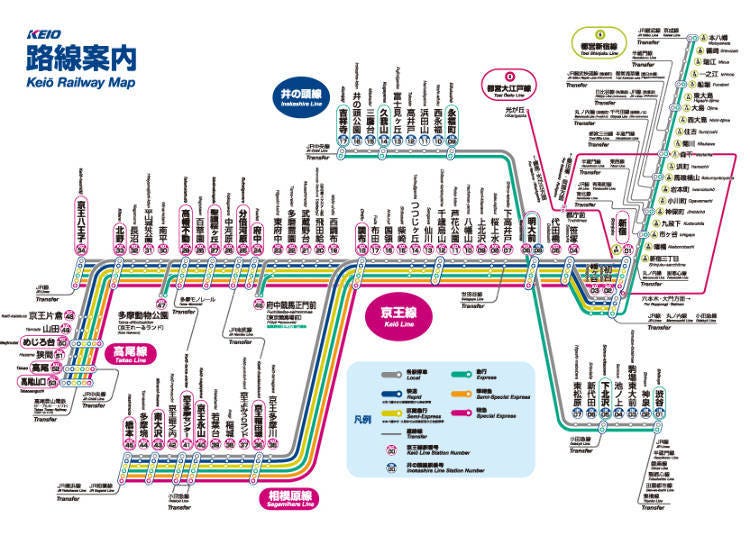 Keikyu Electric Railway’s Keikyū Main Line connects Sengakuji Station in Tokyo’s Minato Ward with Uraga Station at the coast in southeast Kanagawa Prefecture. It is convenient for comfortable access to Kawasaki, Yokohama, Yokosuka, and so on. Within Tokyo, transfer to the Asakusa line is possible at Sengakuji Station, while transfer to JR East’s Yamanote Line is possible at Shinagawa Station.
Next to the main line, the company also operates the Keikyū Airport Line that branches off at Keikyū Kamata Station and takes you to Haneda Airport’s domestic and international terminals. Using the Airport Limited Express (Kaitoku) is the shortest route between Shinagawa and Haneda International Terminal, with only 11 minutes of travel time. 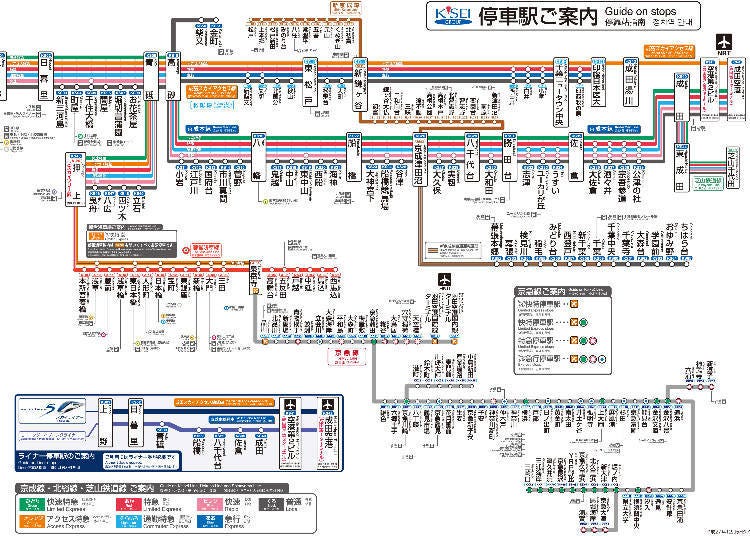 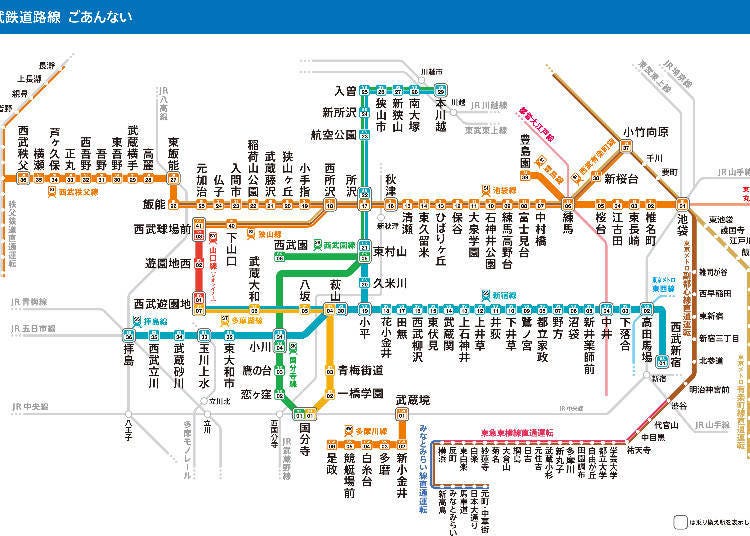 Seibu Railway’s Ikebukuro Line runs between Ikebukuro Station and Seibu Chichibu Station, stopping at Tokorozawa. The Hajima Line branches off at Kodaira Station on the Shinjuku Line and takes you to Hajima Station in Tokyo’s west. If you want to go to Seibuen Amusement Park, use the Tamako Line. Several branch lines connect Tokyo’s northwest to Saitama Prefecture’s southwest, such as the Sayama Line that runs between Nishi-Tokorozawa Station on the Ikebukuro Line and Seibu-Kyūjō-mae Station, where the MetLife Dome can be found, home to the Saitama Seibu Lions.
Seibu Railway also operates several express trains, including the Red Arrow. One Red Arrow Line runs between Ikebukuro and Seibu-Chichibu, while another connects Seibu-Shinjuku and Hon-Kawagoe. On weekends and national holidays only, there’s also an express train called S-TRAIN between Motomachi-Chūkagai Station (Yokohama’s famous Chinatown) and Seibu-Chichibu Station. 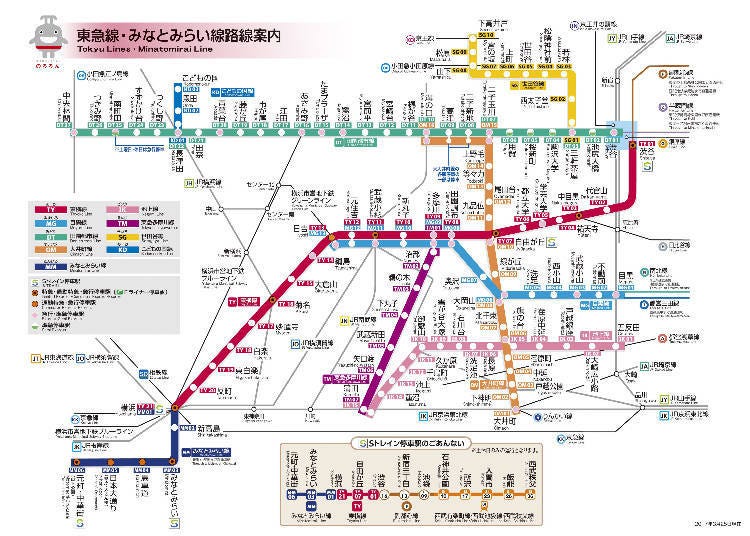 Tokyu Corporation operates 8 lines in total, including the Toyoko Line from Shibuya Station and the Den-en-toshi Line. Especially the Toyoko Line is convenient for sightseers, as it doesn’t only offer a convenient connection between Shibuya and Yokohama but also stops at noteworthy stations in Shibuya and Meguro, including Daikanyama Station, Naka-Meguro Station, Yūtenji Station, or Jiyūgaoka Station.
The Den-en-toshi Line also runs from Shibuya Station to Chūō-Rinkan Station in Kanagawa Prefecture, stopping at stations such as Sangen-Jaya, Komazawa-daigaku, and Futako-tamagawa. 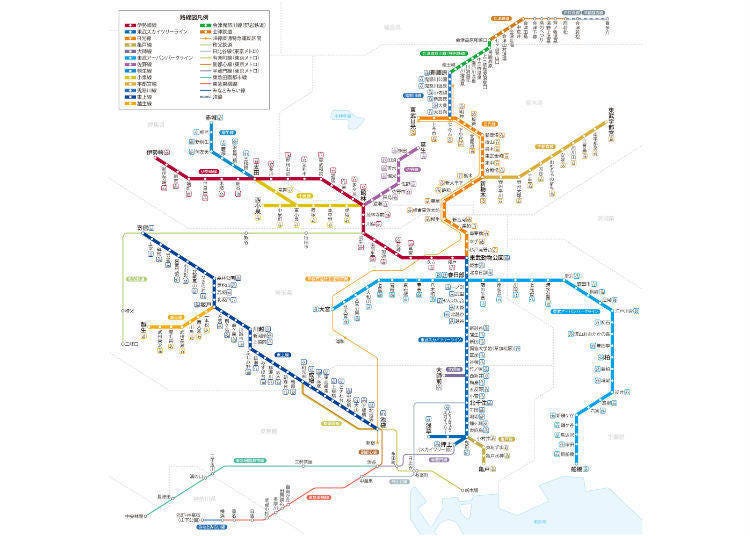 Tobu Railway offers convenient access from Tokyo’s east to Utsunomiya in Tochigi Prefecture and Nikkō in Tochigi Prefecture, as well as to Kinugawa Onsen, Isesaki in Gunma Prefecture, and more.
The company’s main line is the Isesaki Line connecting Oshiage Station and Asakusa Station to Isesaki Station but also the Tōbu Tōjō Line and several branch lines including the Noda Line, the Sano Line, and the Kiryū Line. From Tōbu-Dōbutsu-Kōen Station (Tobu Zoo), the Nikkō Line takes you to the world heritage of Nikkō. The limited express train “Revaty Kegon” from Asakusa Station takes you to Tōbu Nikkō Station within 1 hour and 47 minutes at the shortest. There’s also the limited express “Revaty Kinu,” boasting 2 hours to Kinugawa-Onsen Station. Additionally, the Tōbu Tōjō Line from Ikebukuro Station to Yorii Station in Saitama’s northwest is the shortest way to get to Kawagoe. 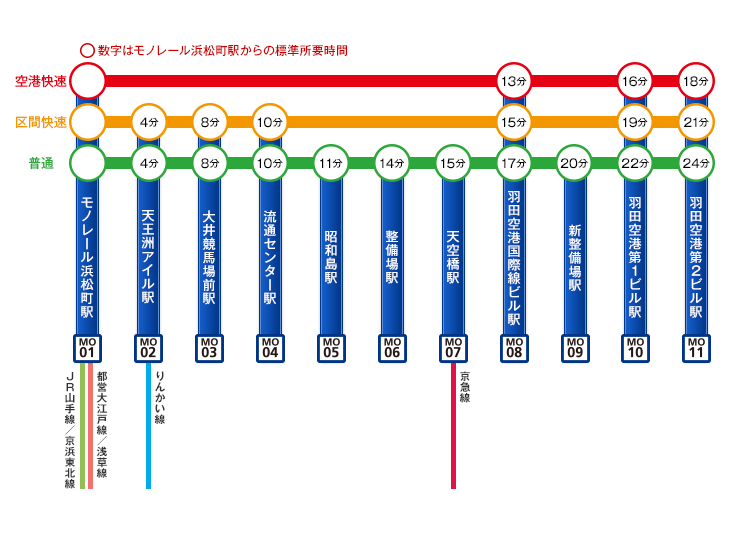 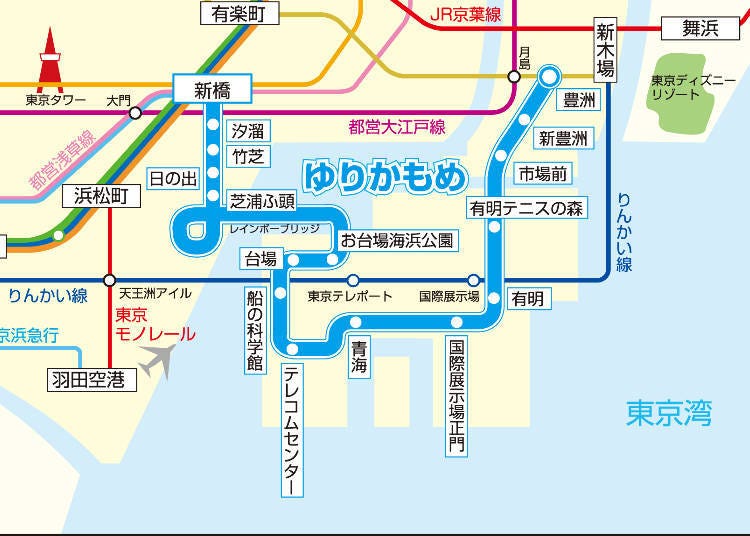 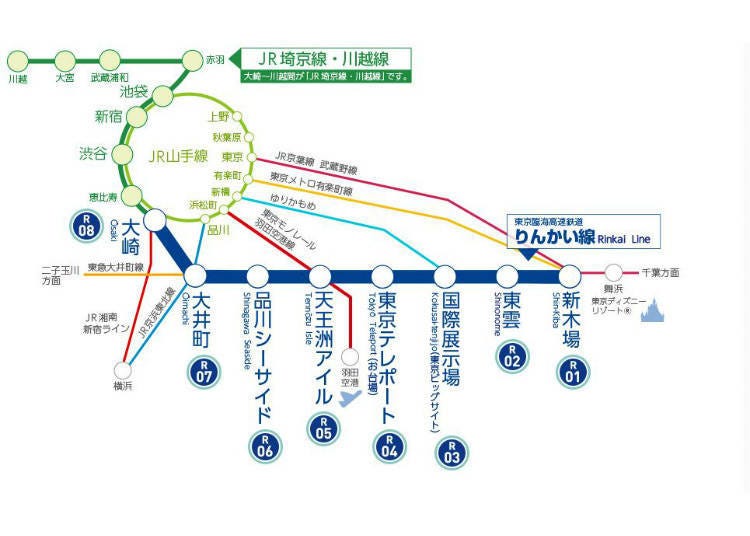