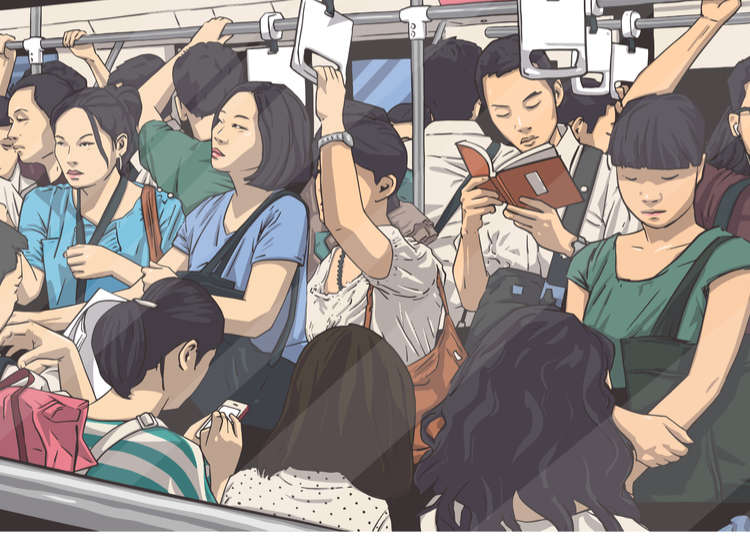 Japan’s trains can at times be some of the most crowded in the world. You may have even seen videos online of people being pushed into trains to be able to fit, and you probably thought, “No way!” However, it’s actually quite a common sight in the packed city of Tokyo!

Although trains in the city can get crowded at any time of day, weekday mornings and evenings are the key times to watch out for. Morning rush hour is from around 7 to 9AM and the rush home usually starts around 6PM and lasts for a few hours. Because the trains are so convenient in Japan, it may be hard for some travelers to avoid crowded times. Sometimes you can see tourists in the jam-packed trains looking scared, confused—or sometimes even entertained! This article will explain to you some tips and basic manners if you find yourself in a crowded train. 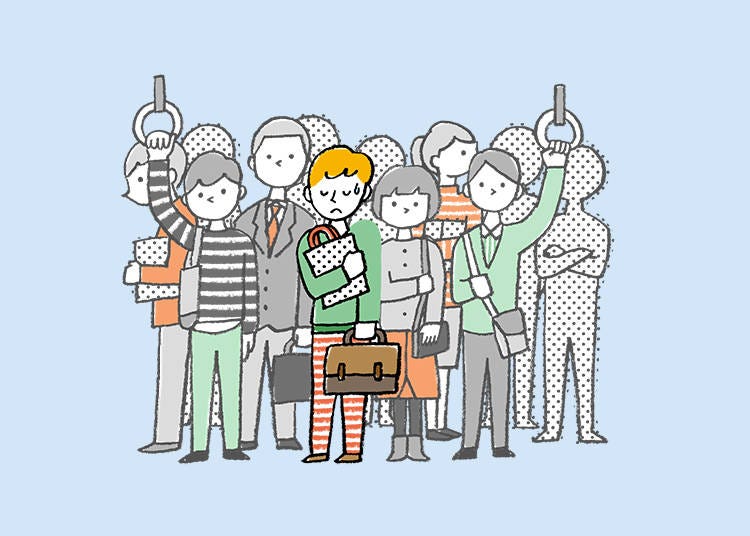 When trains are packed, it’s almost impossible to move at all, so the last thing you want to do is let go or drop any of your items—there will be almost no way of getting them back if dropped between people! It’s important to mind your belongings. If you’re lucky enough to be standing in front of seats with shelves above them, it might be best to leave your items there until you need to get off at your stop.

2) Shift your backpack to your front 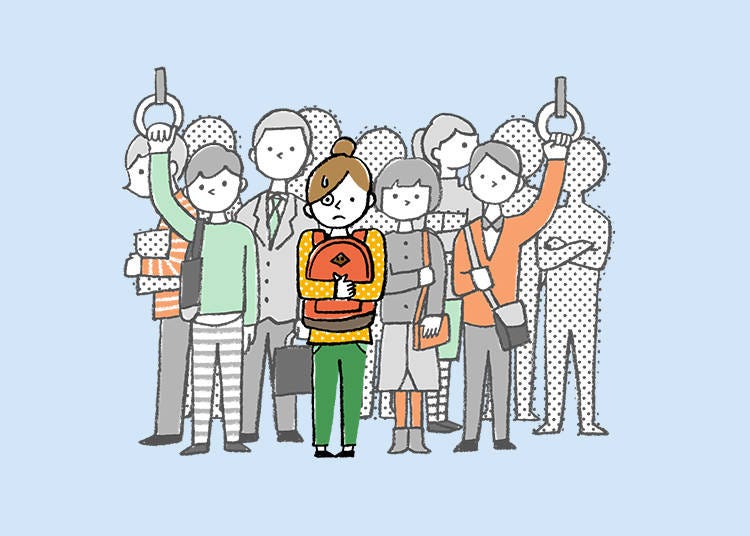 Backpack wearers, beware! As silly as it may seem, keeping your pack on your back is not an advisable thing to do in these crowded trains. Placing it instead to the front of your body will keep your backpack out of the way for those around you and will also save you from getting knocked around by others when getting on and off the train. If you don’t do this, you may get a few glares your way! 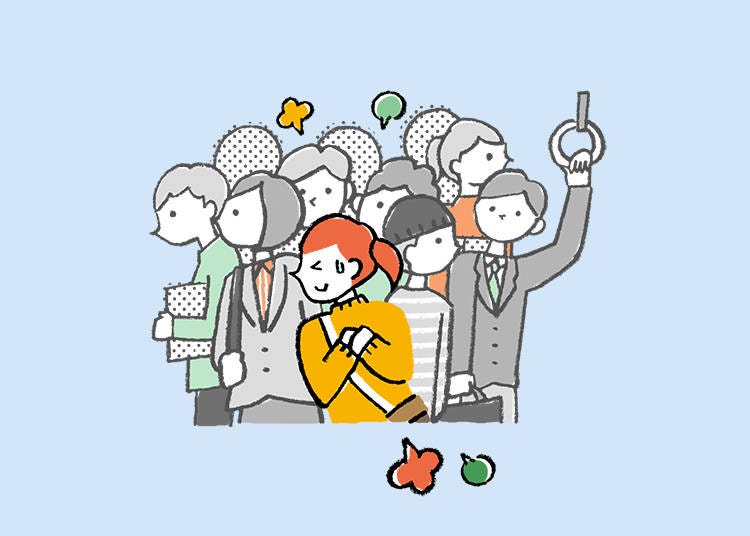 In these trains, many people tend to stand around near the doors, making them the most crowded areas. However, if you go just beyond this you can usually find a decent amount of room for yourself to make your overly-crowded train experience a little bit less stressful! You just will have to dig in a little bit. Don’t be afraid to say “sumimasen (pardon me)” and move past these people.

4) Nothing to hold on to? No worries! 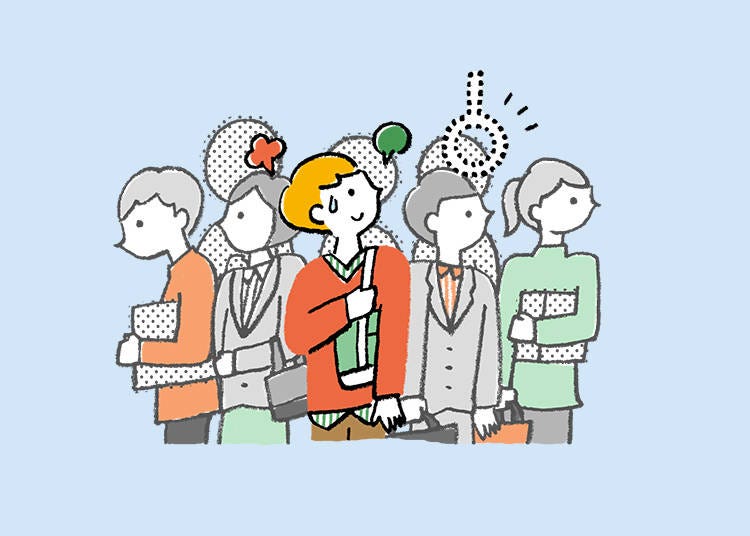 Oftentimes on these crammed trains, you won’t have anything to hang on to. This might seem a little bit scary, but it’s actually no big deal—all of the people in the train become cushions for the others! Even if you lose your footing, it’s unlikely you will fall because of this.

5) Don’t hang around near the doors 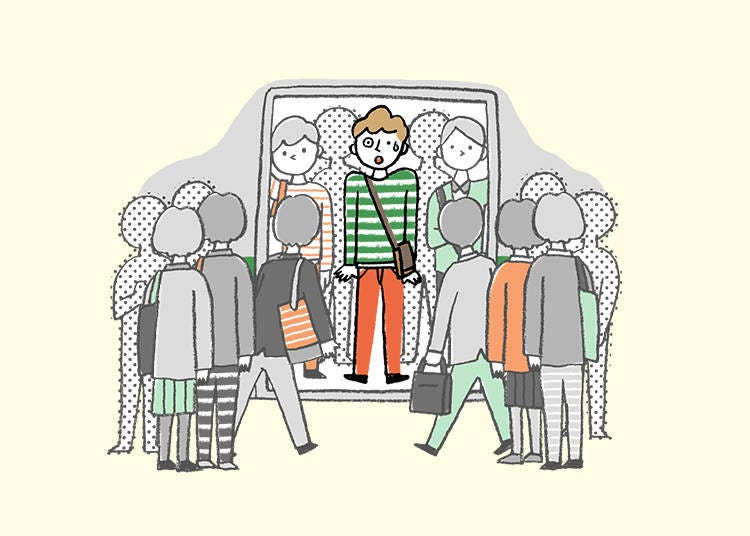 If you stay too long near the doors of the train, you’re going to get pushed by the next wave of people that comes in. If it’s possible to get to the middle of the car, it’s best to try getting there rather than getting squished by the next person getting in!

6) Guys: Keep your hands up 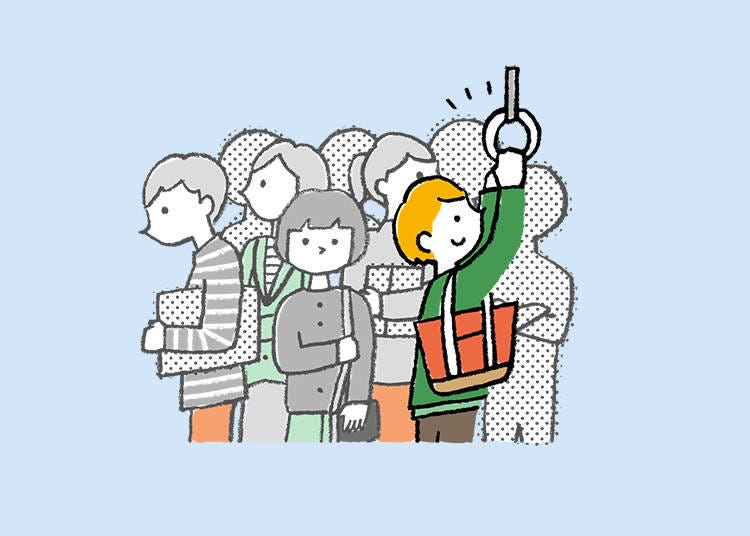 Unfortunately, Japan has a groping problem in their public transportation and it has even lead to false accusations in some situations. Because of this, many men try to keep their hands near their chest or higher to save them from any suspicion. While you are in Japan, it might be favorable to do the same. 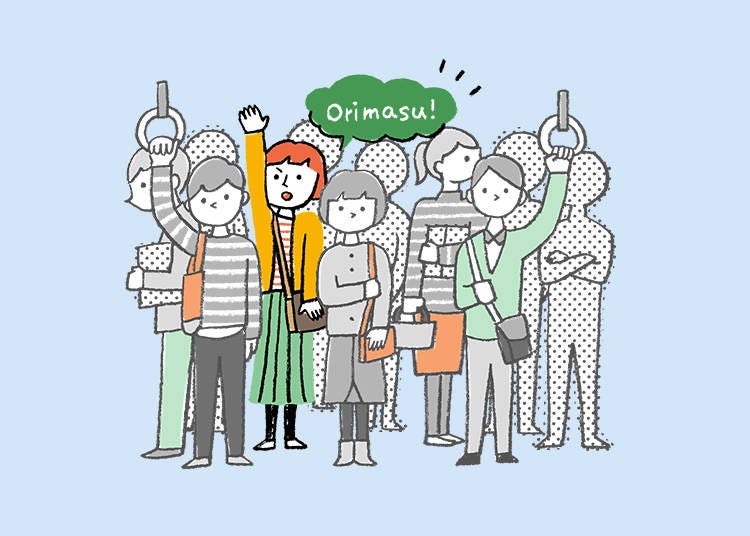 Don’t be afraid to say “sumimasen” or “orimasu (I’m getting off)” when you need to leave the train. Although most times people will notice others that are trying to get off, if you don’t say anything some people may not move for you. Don’t be shy—let people know when it’s your stop! 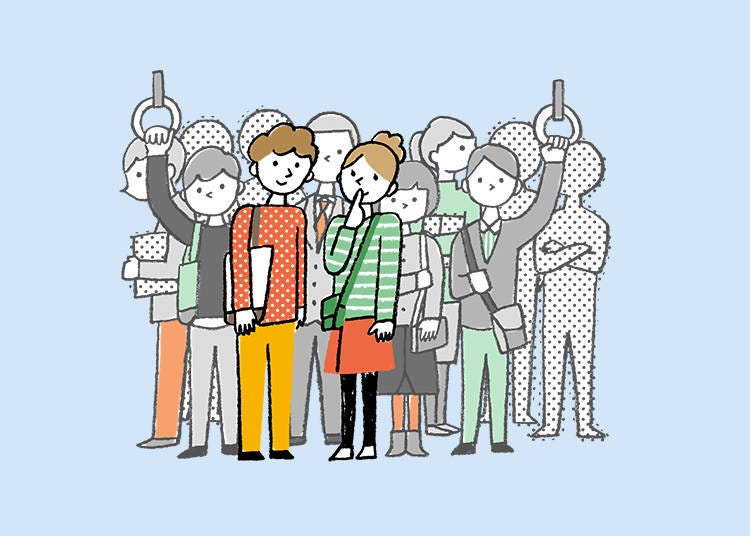 Many people comment that Japanese trains are very quiet for being so crowded. This is usually because most of the people on these trains tend to be heading from home to work or vice versa. Most of these people are tired and just want some peace and quiet. Of course it’s okay to talk on these trains, but it’s good to keep your voice down a bit for the others around you, especially in the morning when most are on their way to the office.

9) Be thoughtful of those getting off the train 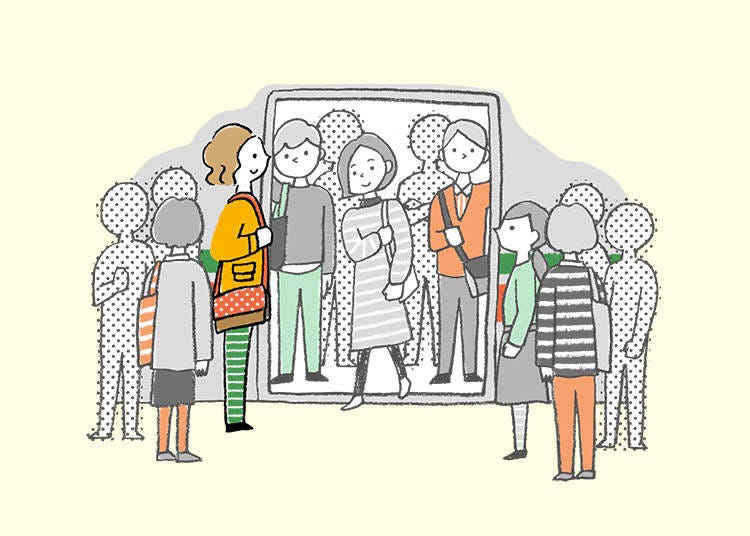 Especially when stopping at major stations, it’s important to be careful of those leaving the train. Although you may not want to, during rush hour it’s sometimes just easier to get off the train and get back on in order to keep the flow of people going steadily. If you are unfortunate enough to be near the doors and everyone around you is getting off, it’s probably better that that you do too! However, if you do this, feel free to go to the front of the line of those waiting to get in. After all, you were there first!

10) Try going to another car 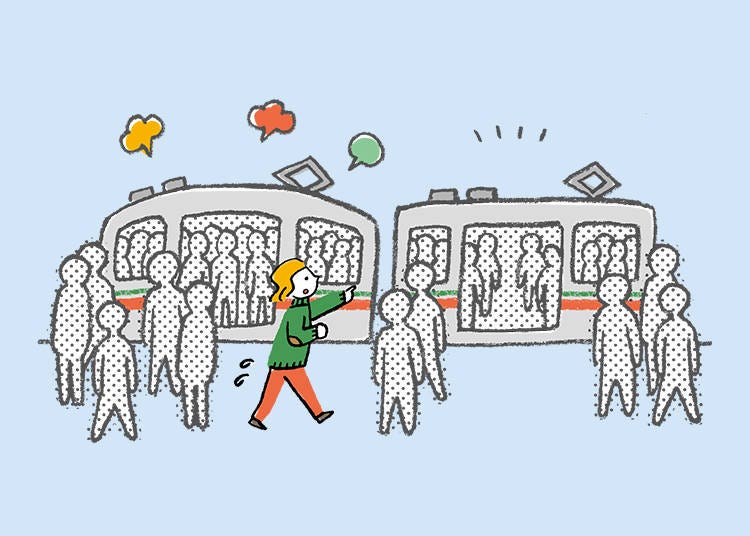 A lot of the time during rush hour, people will crowd around the area where they will need to get off, making those the most crowded areas of the train. Try going to other parts of the train and you might be able to find a car that isn’t as crowded as the one you were just at! 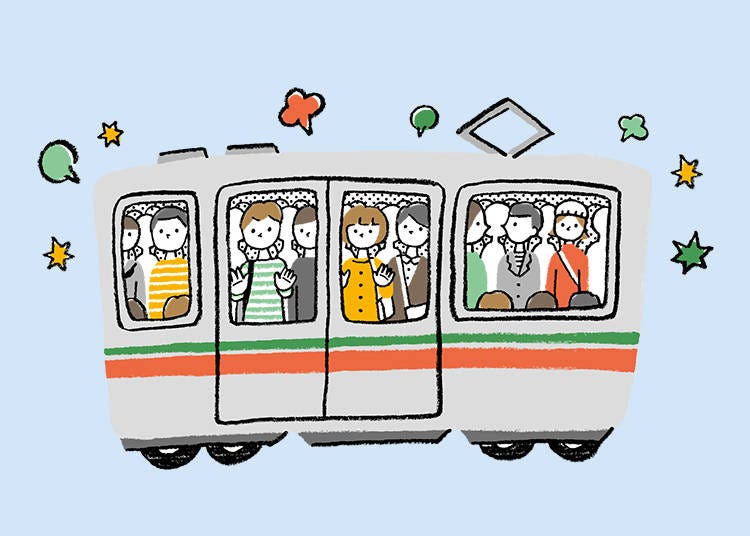 Although packed trains are also a part of the culture in Japan and Tokyo, hopefully you won’t encounter them! But if you do, just keep these ten tips and basic manners in mind and make the best of it!