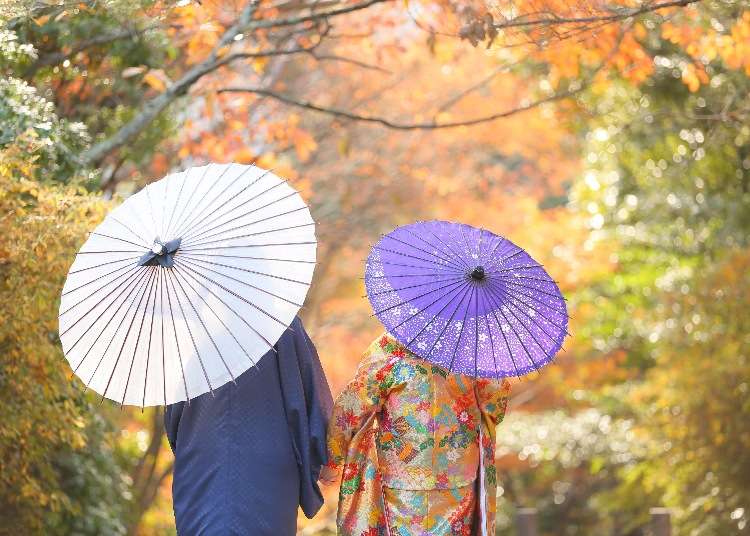 What is Momijigari? All About Japan's Fascinating Autumn 'Leaf-Hunting' Tradition

Autumn is the most colorful season of the year in Japan. Mountains are dyed in beautiful reds and yellows. Maples become a blazing crimson hue, and golden ginkgo trees paint the tree-lined roads. You can truly feel the depth of autumn by simply walking around and admiring the colors of the trees.

This tradition is known as momijigari, or "autumn-leaf hunting," and during the fall season, it's not uncommon to be invited by friends and family to go on an "autumn leaf hunt!"

Here, we talk to Yutaka Miura, an active forest guide who has visited more than 3,000 forests and natural attractions in Japan. Here he will introduce the various ways you can enjoy momijigari and the beautiful autumn leaves of Japan. 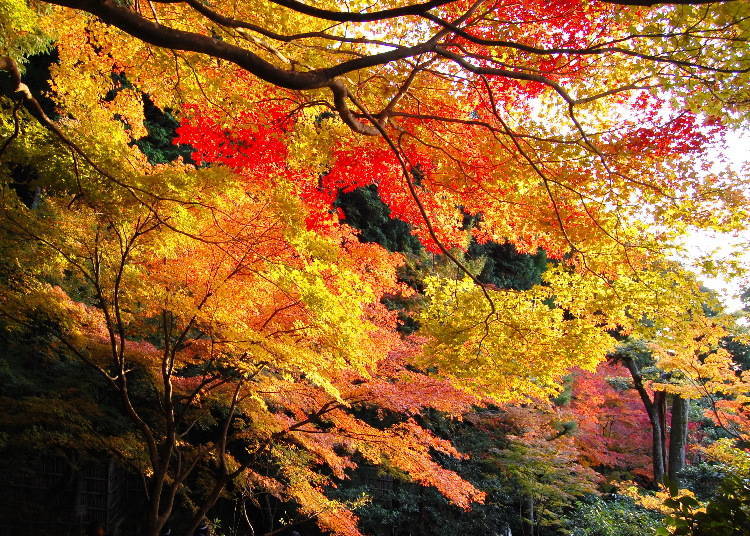 The Japanese word momijigari, or "autumn-leaves hunting," can translate literally to "maple-leaves hunting." It refers to the activity of viewing the red-and-yellow painted trees while strolling around fields through the crisp autumn air.

Although the word "gari" means "hunting," you won't be breaking off branches and taking them home. This hunt involves simply looking at and appreciating the beauty of nature.

The lengthy Japanese archipelago differs in altitude from north to south. You'll usually notice the colors gradually change starting from the mountaintops, even within a single region, so peak foliage viewing seasons may vary.

Generally, the best time to see autumn leaves in Japan is between early November and early December.

Autumn in Japan: When & Where To Enjoy The Fall Foliage Season (+Forecast, Nearby Hotels) 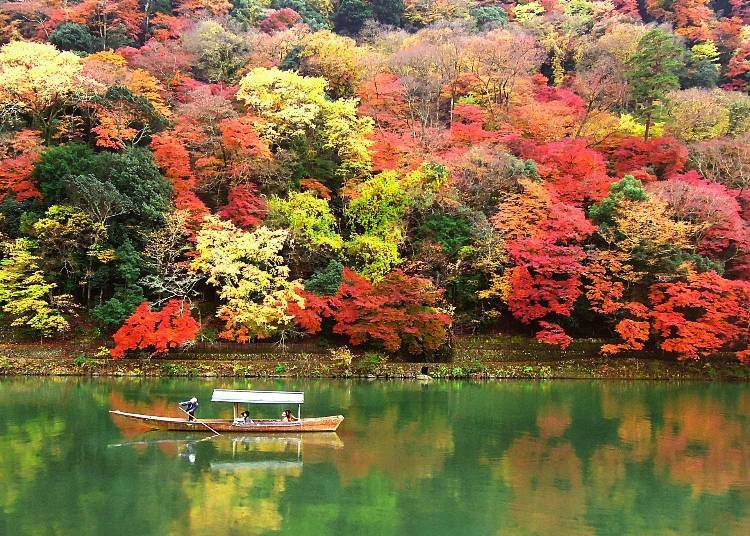 There are said to be about 1,200 species of trees in Japan. Their appearances visibly change in each of the four seasons. Mountain trees, normally green in the summer months, bring out their own unique colors once autumn arrives.

Viewing the autumn leaves makes one appreciate the deepening of fall, the changing of the seasons, and the colorful trees as their leaves change brilliantly one last time before dropping for winter.

Momijigari is a unique tradition that many Japanese people hold close to their hearts, as they admire the warm red and yellow trees before the dark, cold winter. 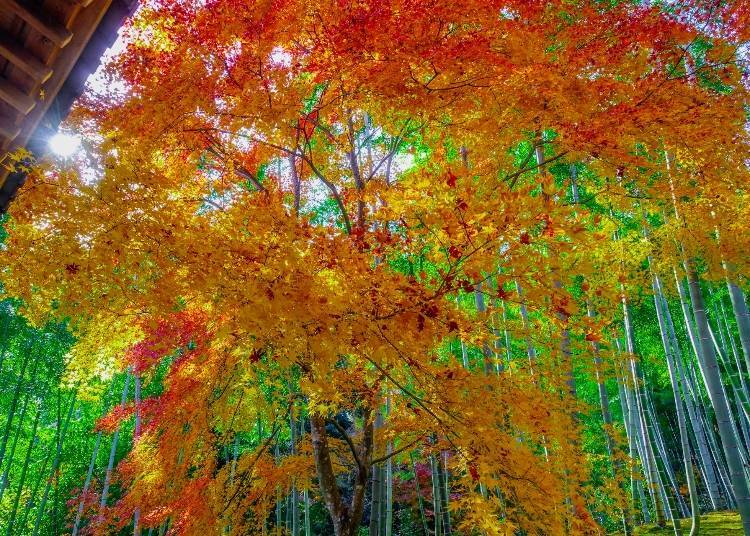 There are various theories about the origin of momijigari. Many believe the custom spread amongst aristocrats of the Heian Period at the end of the 8th century, during the time of the samurai, until the Muromachi Period of the 14th century, where people held banquets and wrote waka poems while admiring the autumn leaves.

Originally, people only used the word "-gari" to refer to animal hunting. Still, Japanese people began to use the word to describe the activity of searching for seasonal plants and flowers in the countryside.

For example, "kinoko-gari" (mushroom hunting) refers to gathering Japanese mushrooms in the mountains, and "shiohi-gari" (low-tide clam hunting) refers to digging up shellfish on the beach during low tide. Eventually, people began to use the term for looking at the autumn leaves, becoming "momijigari."

Momijigari extended to the common people in the middle of the Edo Period in the 18th century. This was a time of peace in Japan after a long period of conflict. Visits to Ise and pilgrimages to Kumano became popular amongst the common people.

Around this time, the Kadanchi Kinsho, a plant guidebook introducing seasonal sights and natural attractions, had also just been published.

Colorful Autumn in the Mountains of Japan! How to Enjoy Momijigari 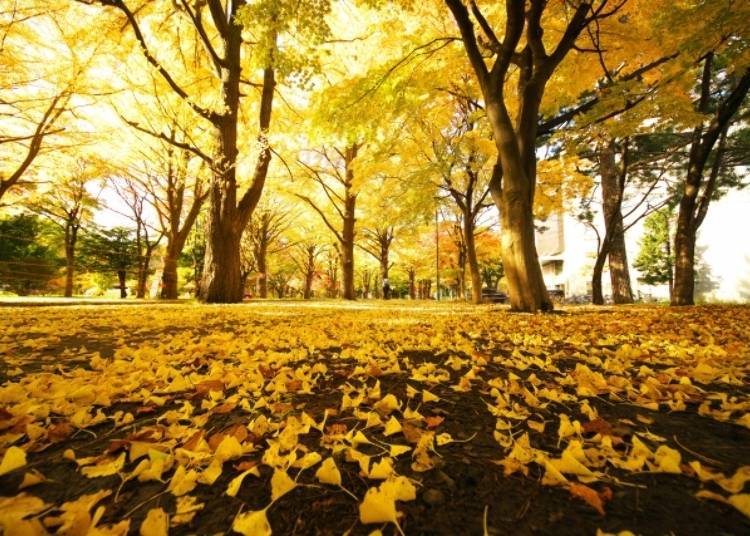 The Japanese archipelago stretches about 2,000 km from north to south. Southern trees that grow green in the winters compete with the trees of the north that turn red before dropping their leaves in autumn. There are said to be about 6,000 species of plants in Japan, about four times as many as in European countries!

The colder the area, the more colorful the leaves become, and the more northward you go, the more famous spots for autumn leaves in Japan you will find. The beeches of the Tohoku Region set the mountains ablaze in dynamic autumn colors. It is also interesting to observe individual trees throughout the forest.

The part of the leaves that are exposed to the sun is usually the most colorful, while shady areas tend to change color a bit later.

Two main types of trees in Japan attract much attention during momijigari: the maple and the ginkgo. 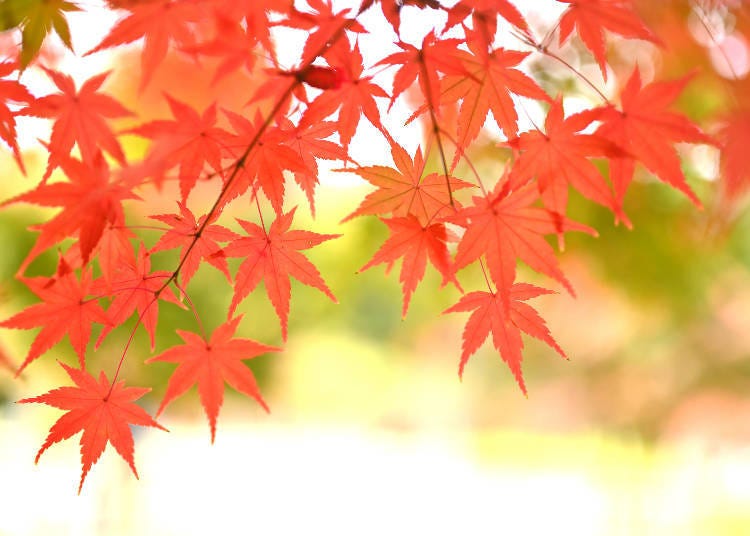 The momiji tree belongs to the same family as the kaede tree (of the genus Aceraceae), both of which are classified as maples.

However, people came to call certain types of maple tree "momiji," namely the ones often found near towns and villages that have deep cuts in the leaves, specifically the iroha-momiji (Acer palmatum/Japanese maple), yama-momiji (Acer spicatum/mountain maple), and oo-momiji (Acer amoenum/palmate maple). All other maples are called kaede (Acer, or simply, maple).

There are many steep slopes, mountain streams, and rocky stretches in the mountains of Japan, all of which are the preferred habitat for momiji. The etymology of the word momiji comes from the verb "momizu," which means "leaves of vegetation become red."

This word itself comes from another verb, "momidasu" (lit. to remove stains by scrubbing them out). This expression personifies autumn trees, making it sound as if they scrub out their colors every fall, and seems to reflect the idea of ​​Japanese animistic nature worship. 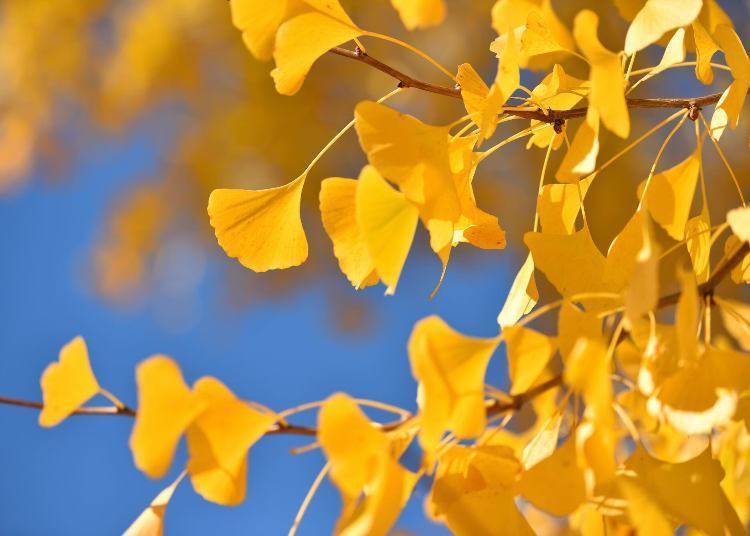 The ginkgo tree is the only species of plant in its genus. Originating in China, it came to Japan between the Heian Period at the end of the 8th century and the Muromachi Period around the 14th century.

However, the ginkgo is actually one of the oldest trees in the world, having existed for about 200 million years! The ginkgo tree actually grew in Japan until about 1 million years ago but disappeared at one point and was reintroduced by China.

However, during that time, the soil environment in Japan changed, especially in the soil-rich forests. Seeds could not grow naturally due to fungi in the ground, which is why you see few ginkgo trees in Japanese forests.

So people took advantage of its pruning-resistant nature, as well as its ability to retain large amounts of water, and planted them along the roadsides and in the precincts of wooden temples and shrines throughout Japan to protect them from fires.

The ginkgo tree can grow to a height of about 30 meters, becoming beautifully dyed in golden from top to bottom during the fall. The falling leaves leave a gorgeous yellow carpet at your feet. This super popular and familiar tree is designated as the symbolic prefectural tree of Tokyo, Kanagawa, and Osaka. 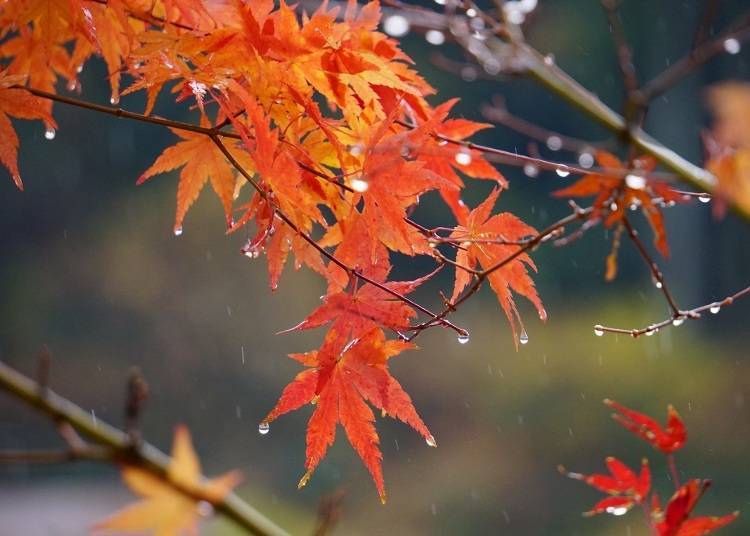 When taking pictures of autumn leaves, we recommend using a backlight, which makes the colored leaves look like stained glass. Leaves dotted with fresh raindrops also make for a beautiful photo. 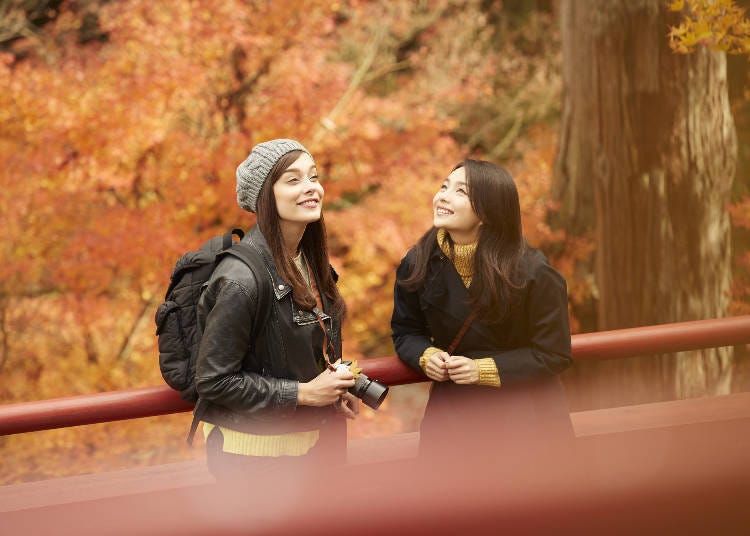 Make sure to wear non-slip footwear when viewing the autumn leaves. Also, as temperatures tend to drop in the evening, bring a jacket or sweater just in case.

We also recommend bringing a compact picnic blanket of about 1m x 2m in size. The forest grounds are oftentimes damp, so if you find a nice spot, you may want to take a short pause to refresh yourself with a quick rest.

Hokkaido (北海道)
Sounkyo: Located in Daisetsuzan National Park, Sounkyo is a famous spot for viewing the autumn leaves that boasts a magnificent view of the painted autumn valley. The best time to see it is around the beginning of October. We particularly recommend checking out the scenic spot, Obako, where you can enjoy the towering rocks and red maples, a stunning sight that you'll only find here.

Jozankei: Jozankei is a famous autumn viewing spot surrounded by the rich nature of the valley. It's only an hour away from Sapporo City by train or bus, and it also has many hot springs. The best time for viewing is around early October. The view of Mount Moiwa from the ropeway is an especially famous landscape!

Onuma Quasi-National Park: Onuma boasts an impressive view of Mount Komagatake, about 1131 meters above sea level. There are two lakes at the foot of the mountain. The forests blanket the entire area in red once fall sets in. The best time for viewing is around the end of October. There's also a walking course. Stroll through the autumn leaves, take the bridge across the lake, and watch the gorgeous autumn sunset!

Tohoku (東北)
Oirase Gorge: The Oirase Gorge, located in southern Aomori, is a famous autumn viewing spot surrounded by beautiful untouched nature. The best time for viewing is around early November. The 20-meter-wide Choshio Falls on the way is a particularly famous attraction.

Naruko Gorge: Naruko Gorge, located in Miyagi Prefecture, is an autumn viewing spot famous for the trees rooted on the rocky cliff surfaces. The best time to see it is in early November. You don't want to miss this masterpiece of nature, as autumn leaves decorate the cliffs nearly 100 meters above the ground.

Ura-bandai: The northern part of Mount Bandai in Fukushima Prefecture is a famous fall spot dotted with lakes. The best time to see it is in early November. Lake Hibara is the largest of all the lakes, with islands of all sizes. These islands, surrounded by the gorgeous autumn leaves, are another popular landscape.

Kanto (関東)
Nikko: This famous autumn spot in Tochigi Prefecture is home to Nikko Toshogu Shrine, a World Heritage Site. The best time to see it is around early November. In addition to Toshogu, Lake Chuzenji and Kegon Falls are also famous attractions.

Mount Takao: Mount Takao is another famous spot for viewing the autumn leaves. It's easily accessible from Tokyo and the Kanto area, and only takes about 50 minutes from Shinjuku by train! The best time to see it is around mid-November. You can also take the cable car from the foot of Mount Takao to the middle of the mountain, where you will be surrounded by autumn leaves along the way.

Kamikochi: Kamikochi, located in Nagano Prefecture, is a popular mountain resort at the foot of the Northern Alps, and a famous spot for autumn leaves. The best time to see it is in early November. The scenery of the autumn leaves reflected in Taisho Pond surrounded by mountains is an especially incredible sight.

Kansai (関西)
Kyoto, Arashiyama: This is one of the most famous spots for viewing the autumn leaves in Kyoto. The best time to see it is in early December. Enjoy the various expressions of autumn as seen from the mountains behind the Togetsukyo Bridge and the Hozugawa River-kudari Cruise, where the powerful autumn leaves enclose you on both sides.

The Japanese tradition of momijigari, or hunting for autumn leaves, is one that appreciates nature. Enjoy the colors of the mountains and trees, and feel the unique fragility of Japan's seasons as the autumn leaves change. This fall, why not go on an autumn leaf hunt for yourself?


About the expert interviewed for this article 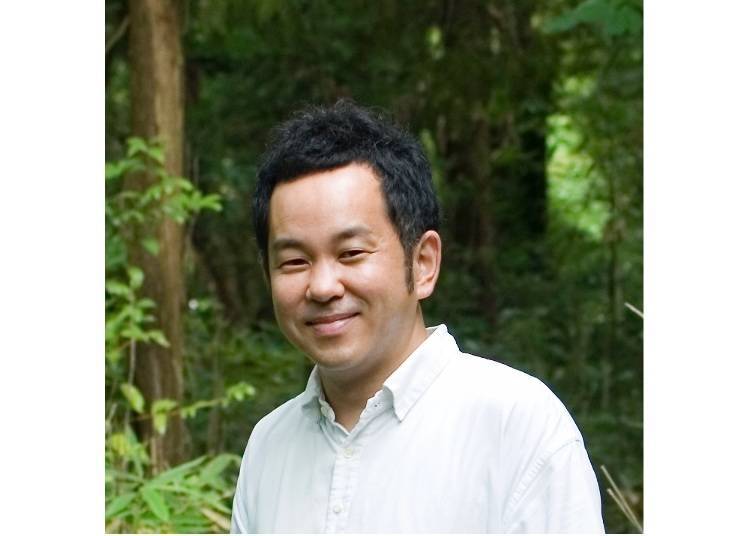 Forest Guide: Yutaka Miura
Born in Kyoto in 1977. Since 2004, he spent five years traveling in Japan, as well as to Australia and New Zealand. He became a forest guide in 2010 and now shows people around Japan's famous forests and gardens. He has visited over 3000 forests and other natural places in Japan and has published a book: Ki no Mikata (Mishimasha Publishing). Since 2020, he has hosted an online community every Thursday called "Minna no Mori Salon." He loves the city as well as forests and gardens.

*Information in article as of October 2021.