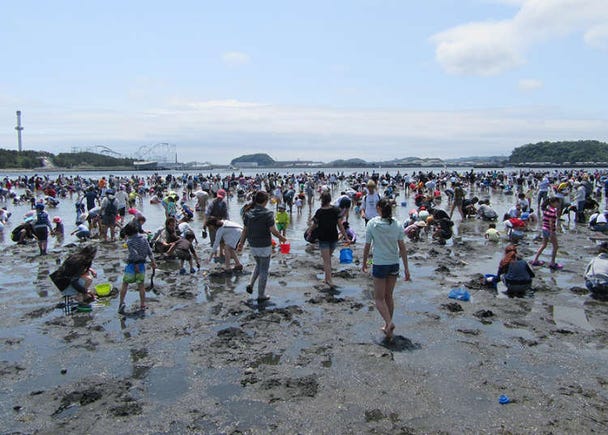 Tokyo's early summer is the best time to go outside and have fun under a warm but still gentle sun. One of the favorite activities of all Tokyoites, old and young, is hunting for clams and shellfish in and around the metropolis. We'll show you both secret and popular ocean spots and provide you with the basics of successful clamming and shellfish hunting! 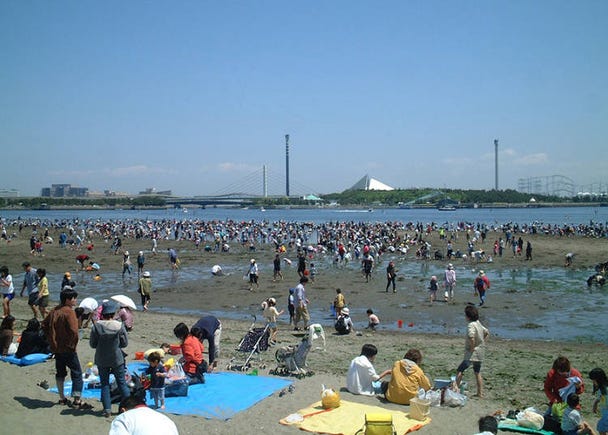 Okinawa Park is Yokohama's only park that has an actual beach. The artificial sand beach stretches for roughly one kilometer and is filled with shellfish and clams that are waiting to be picked up, entirely for free! This park is among the most popular beaches in the entirety of the Greater Tokyo area, so prepare to deal with a crowd. However, this also means that toilets and washing stations are readily available, so there's no need to worry about that!
Okinawa Park's beach is abundant with creatures from the ocean, such as shellfish, crabs, and short-necked clams, called asari in Japanese. They're all carried in from Tokyo Bay by the tide.

The best time for gathering and collecting is two hours before and after low tide. Don't hesitate to change your digging spot frequently if you don't find any clams - due to the popularity of the park, everything might already have been dug up at your particular spot. Both the digging and the park entry is entirely free; however, there is a 2kg limit of what you are allowed to take home regarding your clam and shellfish haul.
Apart from this hunt, look forward to enjoying football and other sports on the spacious lawn, and why not have lunch at one of the barbecue spots (reservation required, charged)?
We highly recommend Yokohama's Okinawa Park for a wonderful day outdoors, surrounded by nature, the sea breeze, and lots of clams! 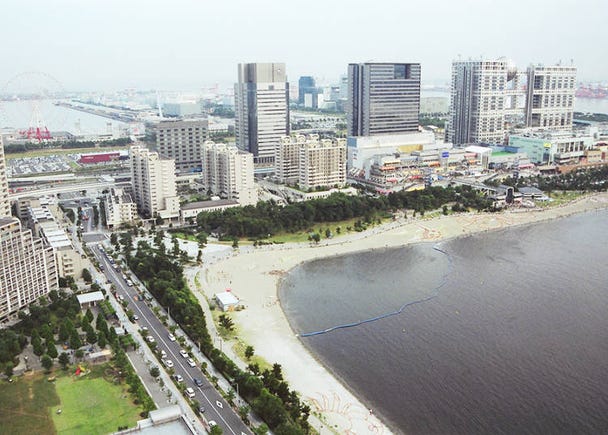 Odaiba is one of Tokyo's leading tourist destinations and some might be surprised to hear that its beautiful Odaiba Seaside Park offers clam and shellfish hunting entirely for free. Enjoy the amazing sight of the rainbow bridge while digging for clams on the sandy beach! Made of sand from the Izu Islands, the beach is around 800 meters long and an incredibly calm seaside oasis, sure to let you forget the hustle and bustle of the big city.

Odaiba Seaside Park is surprisingly rich in shellfish, such as asari, shiofuki, bakagai, and more! If you're lucky, you'll go home with a full bag of maritime treasures.
This spot is a wonderful place to calm down and relax after a long day of shopping and sightseeing on Odaiba, and recommended to each and everyone who wants to get in touch with nature in the middle of Tokyo.

Kasai Rinkai Park - A Paradise of Natural Clam and Shellfish! 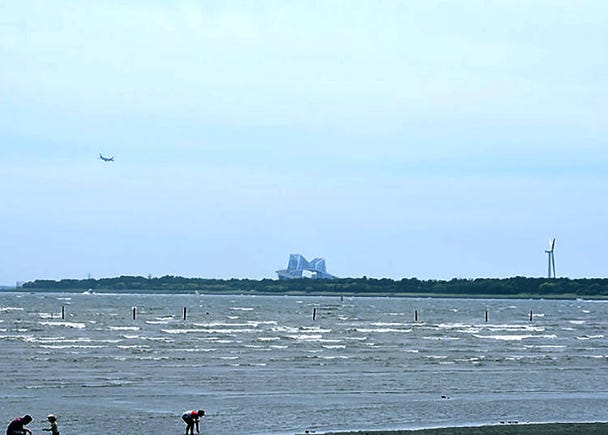 Kasai Rinkai Park is made up of two artificial tidal flats called East Nagisa and West Nagisa. The entire park is a nature reserve for wild birds and shellfish, and a favorite spot of relaxation of many a Tokyoite due to the beautiful scenery changing with each season.

West Nagisa doesn't only have a beautiful beach and barbecue places to offer, it is also famous as natural shellfish hunting grounds. The beach is not exclusively used for this purpose, so do not expect to haul in massive quantities, but you can absolutely look forward to plenty of natural shellfish, such as shiofuki, bakagai, or mategai.
On top of that, you'll be able to spot numerous small fish such as ayu and goby frolicking in the shallow waters that larger fish cannot enter. Children will have a particularly great time at Kasai Rinkai Park, catching crickets and crayfish, and discovering the pulse of nature and maritime life!

A Must for Clam and Shellfish Hunters: What to Wear & What to Bring 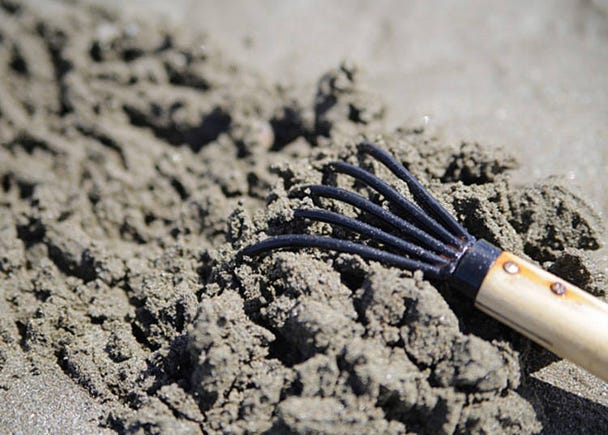 All the introduced shellfish hunting grounds in and around Tokyo are free spots - this also means that tools and equipment cannot be rented. Let's take a look at the absolute necessities for every shellfish hunter: a bucket, a basket, gloves, and a rake. At free spots, large tools are often forbidden, so we highly recommend a rake that is smaller than 15 cm.

Even on cloudy days in early summer, be aware of the sun - it can be more intense than you think! Wear a hat or a towel on your head and be wary of sunburn. Splintered shells might hurt your feet, so we recommend wearing water draining shoes over boots. You'll find them much more comfortable as well! Secret tip: if you don't have water shoes, find some pairs of old socks and wear those instead.
Another must-bring are some old newspapers - they will soak up the wetness of your gathered shellfish and your tools. Plastic bags always come in handy as well!

The Basics of Clamming and Shellfish Hunting 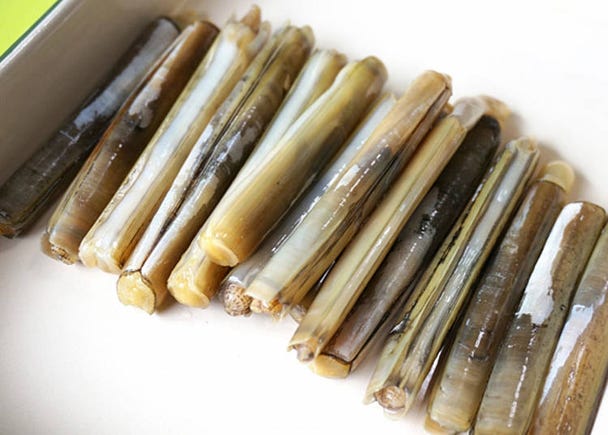 Clamming and shellfish hunting will only be successful during the low tide. Arrive at your preferred spot around two hours before ebb - this way, you shouldn't ever be surprised by a rising tide! You can look up the specific low and high tide times on the website of the Japan Coast Guard.
Japan's staple clam for every hunter is asari, or short-necked clam. The largest of them can be found on sandbars and sandy beaches and once the tide is low, look for pairs little holes called the "asari's eyes." The trick is to dig in a wide but shallow manner. Dig up the clams while staying on the move, don't only check at one spot!

Next to asari, look for mategai, or razor shells. They look like bamboo and can be found between 30 to 50 cm below the surface, hiding deeper in the sand than asari. Looking for those mategai is incredibly fun and unique - it's a thrill for old and young! First, rake away the sand roughly with a shovel and you'll notice holes of about 1 cm in size appearing. If you sprinkle salt on it, the mategai will pop out just a little bit. This is your moment! Grab on to it tightly and pull it out of the sand carefulle! If you're not fast enough, it will get away.

The Rules and Manners of Clamming and Shellfish Hunting 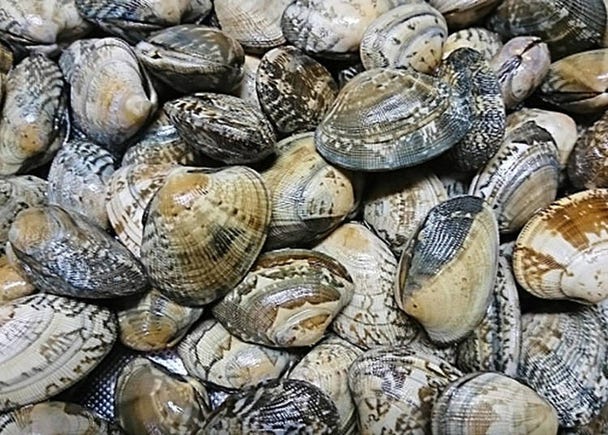 One of the most important rules for clamming and shellfish hunting is the proper confirmation whether digging is allowed on the spot you want to visit. Some spots, including some of those we showcased, may have fixed dates and times for clamming and hunting, so make sure to check beforehand.
Another thing to keep in mind is the size of your tools. As already mentioned, certain places forbid large equipment. Other spots will only let you hunt a certain amount of clams and shellfish.
In general, don't collect clams that are smaller than 2 cm - they are young and still need to grow into a proper clam.
The rest is common sense. Don't leave any trash behind, don't bother fellow hunters and other visitors.

Most of all, however - have a wonderful time on your Japanese clam and shellfish hunting adventure!