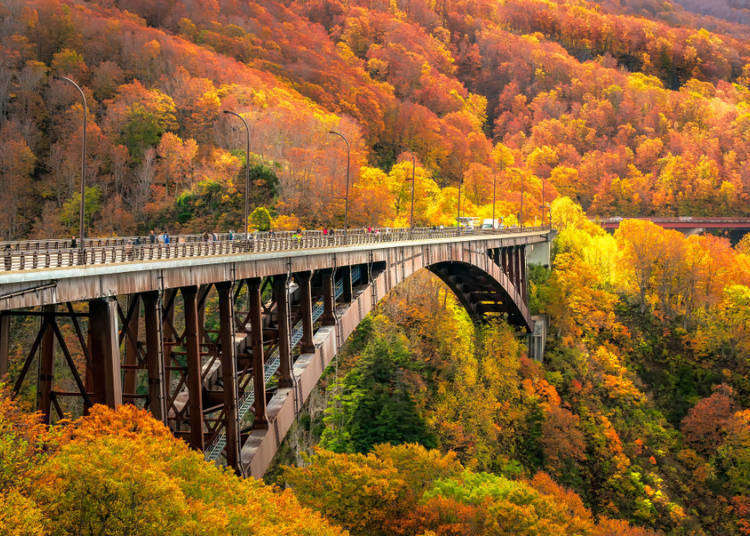 Aomori in autumn is home to many of the most famous fall foliage spots in Japan! In fall, red, orange, and gold leaves decorate trees, turning them into painting-like landscapes.

The leaves gain unique colors due to the difference in temperature between day and night, and the landscape of forests, valleys, and parks is spectacular.

Here we will share some of the most beautiful autumn foliage spots unique to Aomori Prefecture, blessed by lush nature, plus the best time to visit. 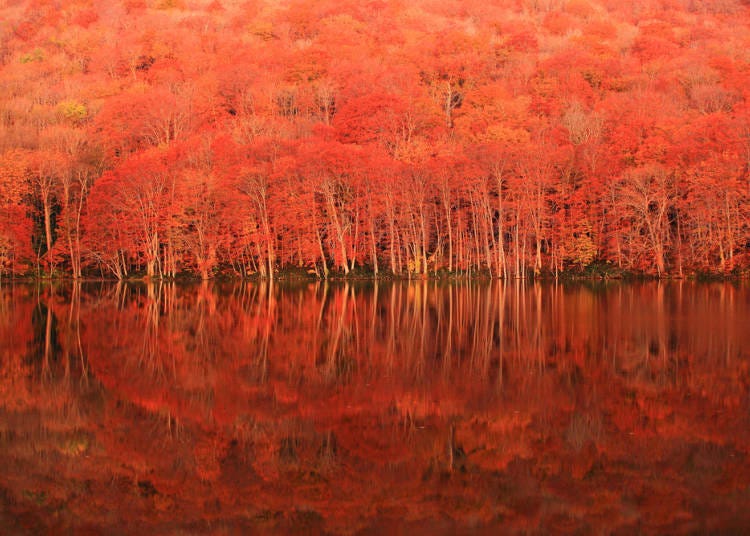 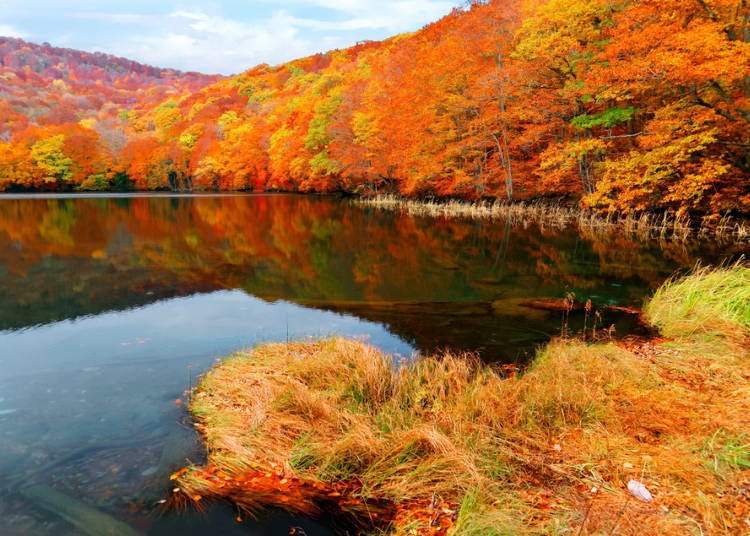 Tsutanuma Lake is located in the Oirase area of Towada City. It's surrounded by virgin forest and visited every year by tourists from all over the country and world who come to see the autumn colors and take as many pictures as they can.

In particular, the mirror-like surface of the lake creates a mysterious and charming picture at sunrise that can only be seen at that moment. We also recommend visiting the other marshes while exploring the promenade, especially in mid-October. 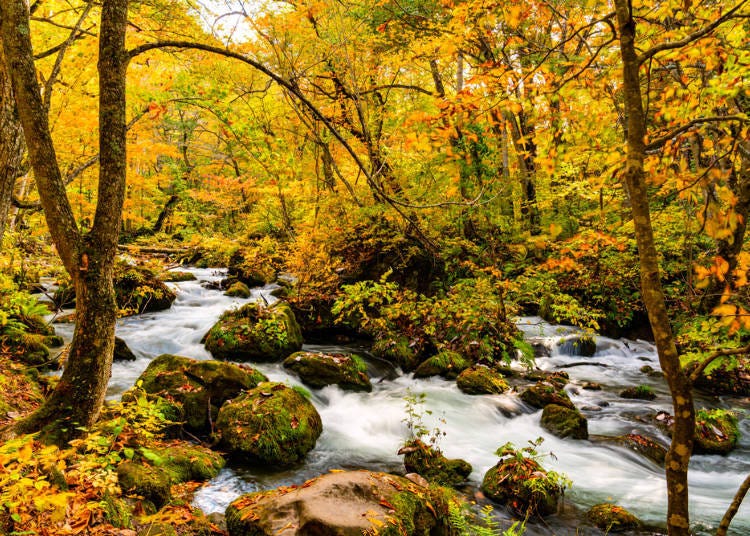 Oirase Mountain Stream, where autumn leaves are in full color 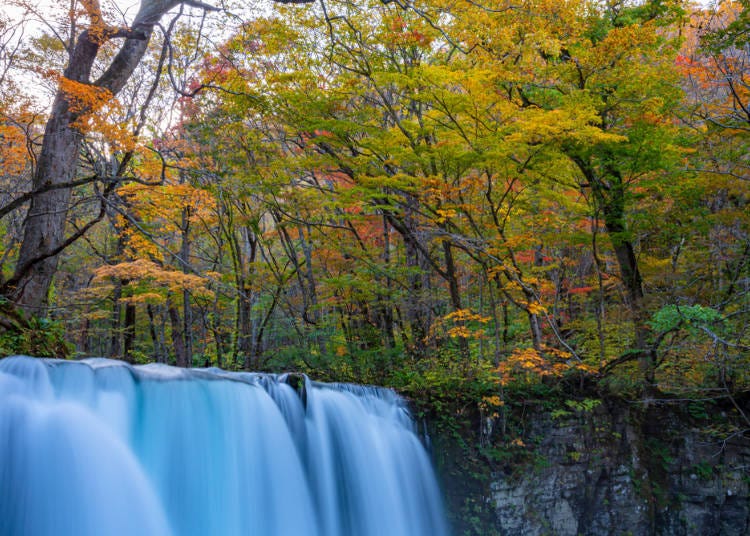 Oirase Mountain Stream is located in Towada City, like Tsutanuma Lake, and is surrounded by a deep, natural forest. The 14km path beside the stream itself is surrounded by many kinds of trees, like azalea, maple, and more, forming a gorgeous tunnel of fall foliage.

The autumn leaves show their best from late October to early November. The combination of the tunnel embellished by the autumn colors, the dynamic mountain stream, and the magnificent waterfall make for a fantastic landscape. 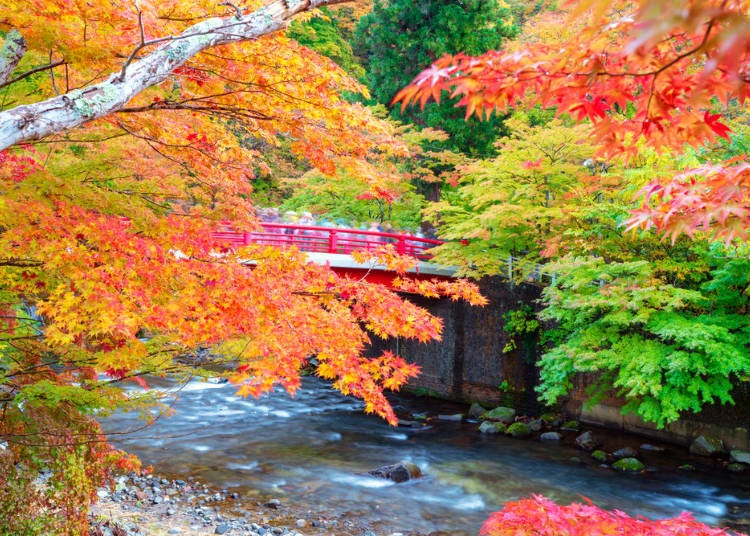 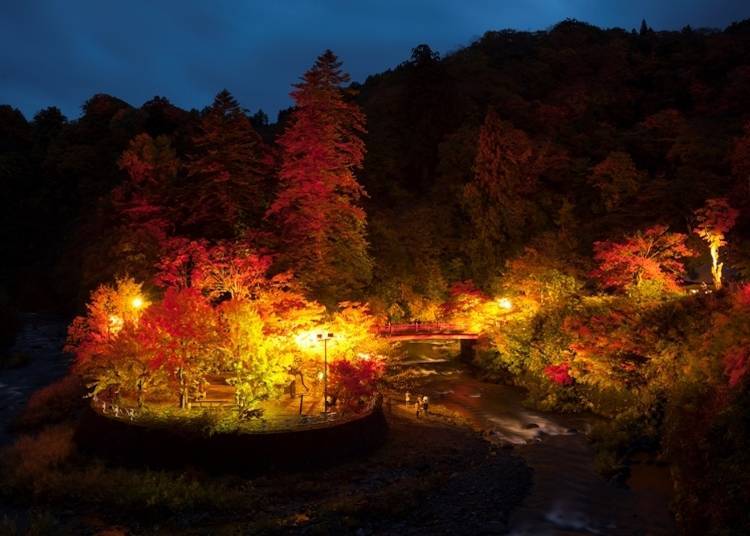 Located in the center of Aomori Prefecture, Nakano Momiji Mountain, in Kuroishi City, is a famous location for autumn leaves with its beautiful Japanese maples. 100 kinds of maple trees were ordered from Kyoto and planted during the time of the feudal lords (around 1802). Now the fiery red maple trees perfectly espouse the bridges and torii gates of this beautiful site.

At night, the leaves are illuminated, creating a fantastic world, and showing a completely different spectacle from the one you can enjoy during the day. You will also see Kanpudai area, with its famous beautiful carpets of fallen leaves, and Fudo Falls, with their soothing sound. The best time to admire the foliage here is in mid-October to early November. 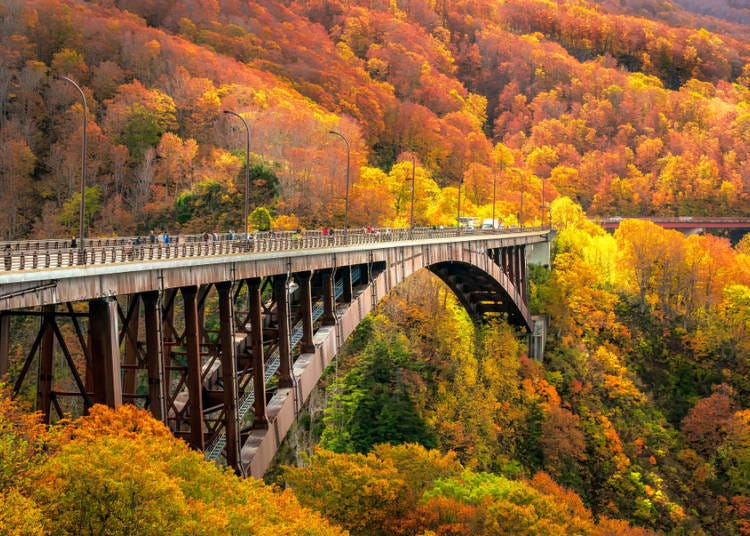 Jogakura Ohashi Bridge in Aomori City is a huge bridge with a 255m arch spanner. When it opened in 1955, it used to be the longest bridge in Japan. It's located in the Towada-Hachimantai National Park, which spans across three prefectures: Aomori, Iwate, and Akita.

From the Jogakura Ohashi Bridge, you can enjoy a magnificent 360-degree panoramic view or the red and yellow field of foliage in Aomori in autumn, around mid-October. From the 122m high bridge, you can see the valley at the bottom, with the tranquil Jogakura Mountain Stream flowing along - one of the most scenic bodies of water in the area. There are parking lots at both ends of the bridge, making it easily accessible and perfect to stop and take pictures.

5. Mount Hakkoda: See a thrilling carpet of crimson leaves seen from the ropeway 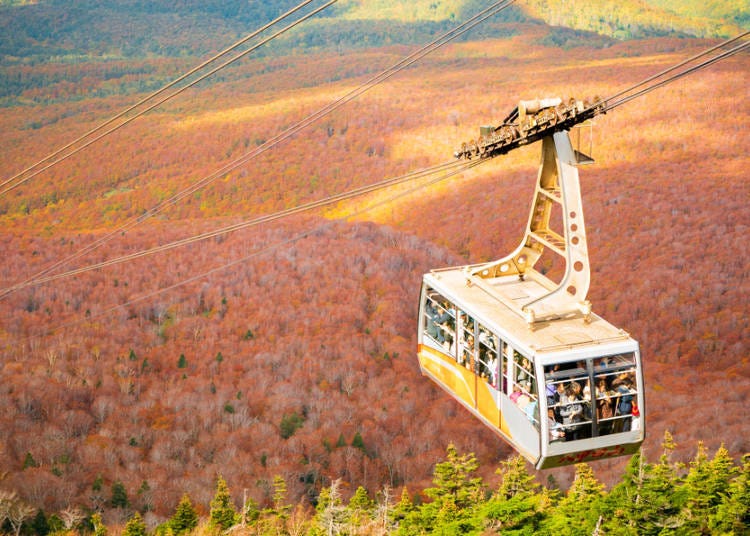 Autumn leaves of Mount Hakkoda seen from the Hakkoda Ropeway 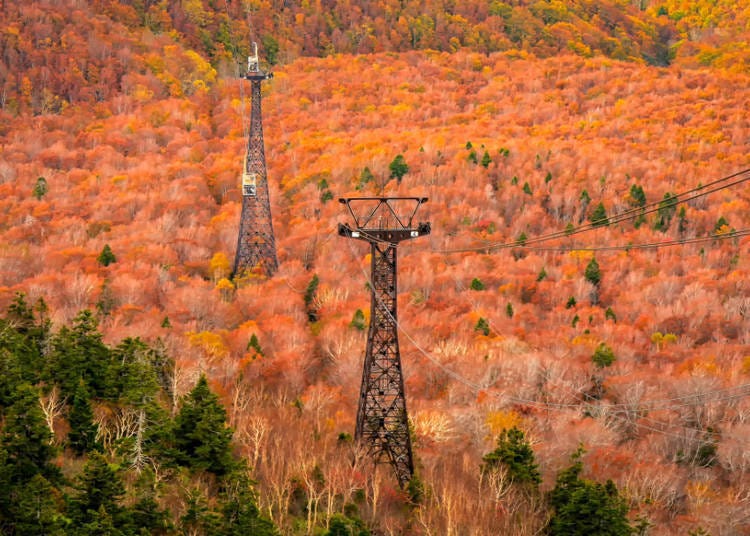 Mount Hakkoda, one of the 100 most famous mountains in Japan, is a popular ski destination in winter, but in autumn, it sports one of the most beautiful places for fall foliage in Aomori. Trees spread over layers of other trees, lush with autumn leaves, appearing like a carpet when seen from the ropeway.

These autumn leaves are at their peak of beauty in late October. At the mountaintop park of the ropeway (Hakkoda Gourd Line), you will find a promenade offering a 1km-walk surrounded by autumn leaves. 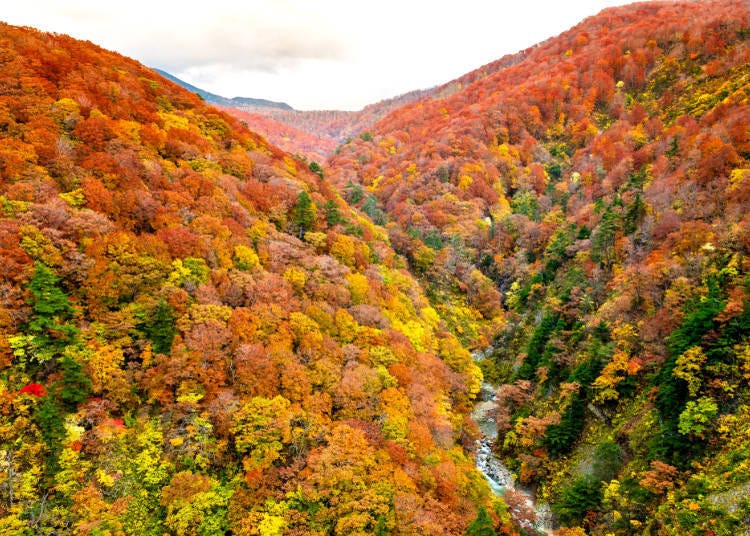 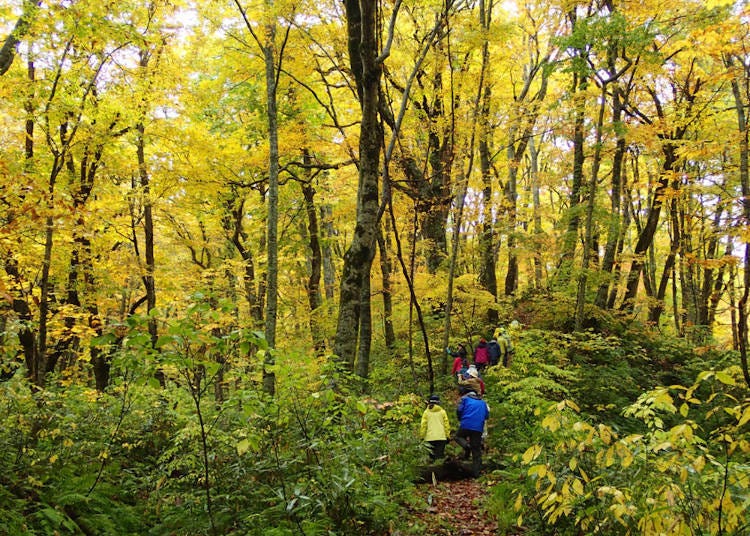 The Shirakami-Sanchi mountain area is a treasure trove of nature surrounded by vast beech forests, also recognized as a World Natural Heritage site. From mid-October to late October every year, the autumn leaves are in full bloom, and the vast beech forest is vividly colored.

The landscape, even from a distance, is beautiful. Still, we recommend trekking along the paths to really be in contact with nature here. Surrounded by the fall foliage in this mysterious forest, you can take a walk in the quiet promenade covered by fallen leaves.

Why not take a walk in the wilderness inhabited by Japanese serow and bears and experience the autumn of this World Natural Heritage site? 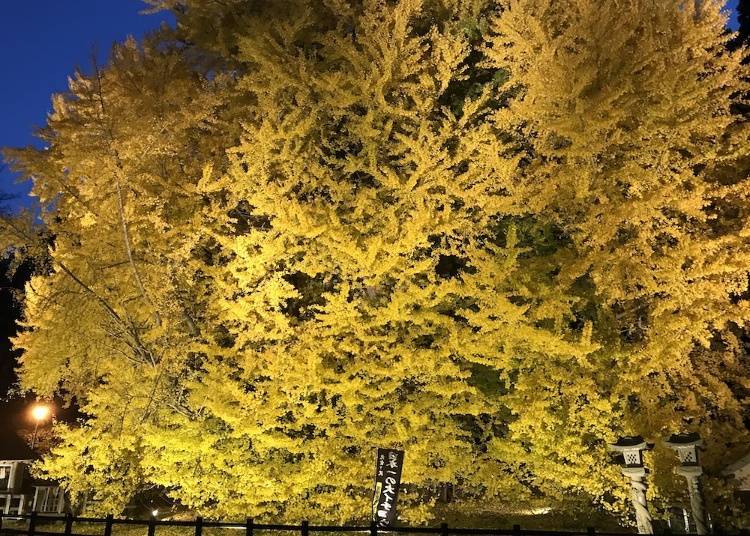 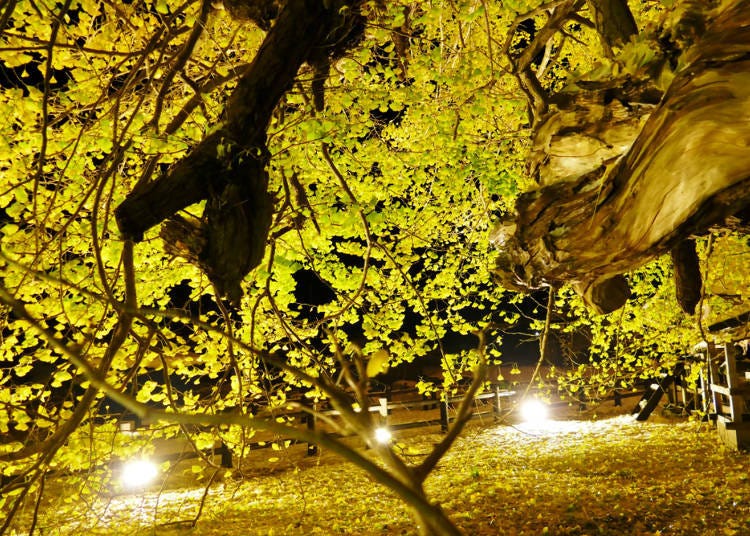 In Kitaganegasawa, in the city of Fukaura, facing the Sea of Japan, there is one of Japan's most massive giant ginkgo trees, that is over 1000 years old.

Every year from mid-November to late November, this giant tree with a height of 31m and a trunk circumference of 22m, turns bright yellow, giving its nickname of "Big Yellow." The biggest highlight is the illuminated light, and its golden appearance is of staggering beauty. Absorb the power of this large national natural monument. 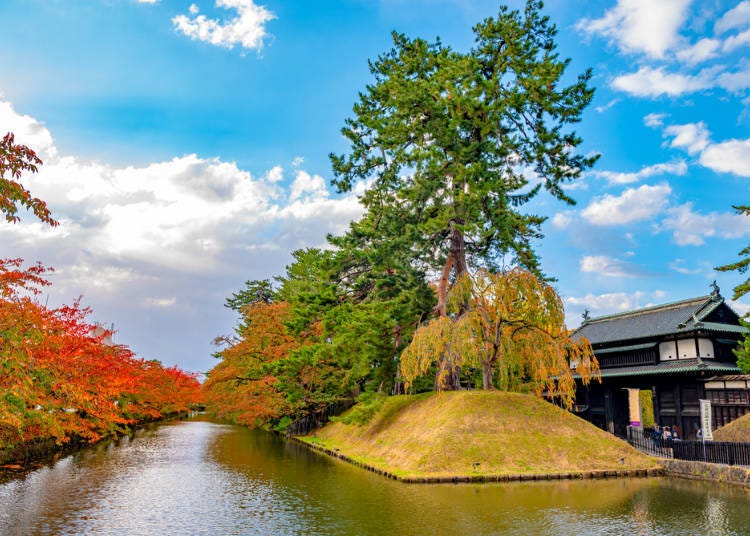 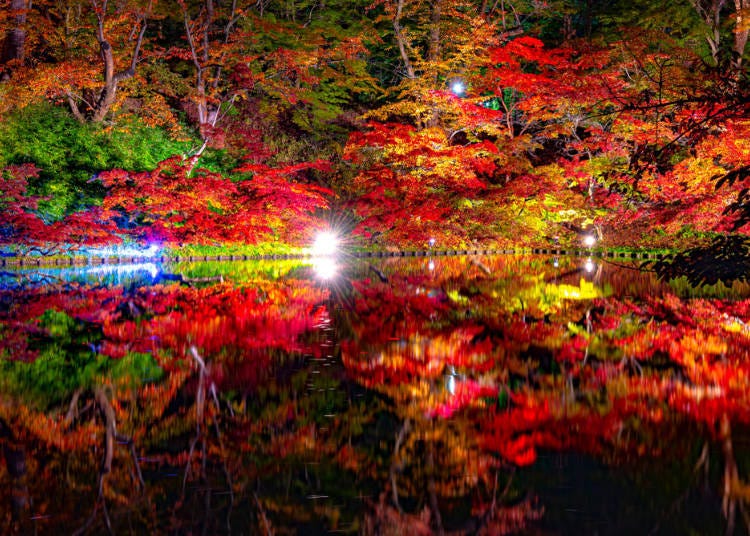 Hirosaki Park in Hirosaki City, famous also for its cherry blossoms, reaches its best time to see autumn leaves between mid-October and early November. The maple and cherry trees of the park turn bright red and yellow and combined with the tower and the castle gate of Hirosaki Castle, they recreate the atmosphere of an ancient city.

At night, the leaves are illuminated, showing another face of the landscape, with a fantastic reflection of the colorful foliage reflected in the moat, making you feel as though lost in a painting. Hirosaki, with its 400-year history, is a popular spot to enjoy autumn foliage in Aomori. 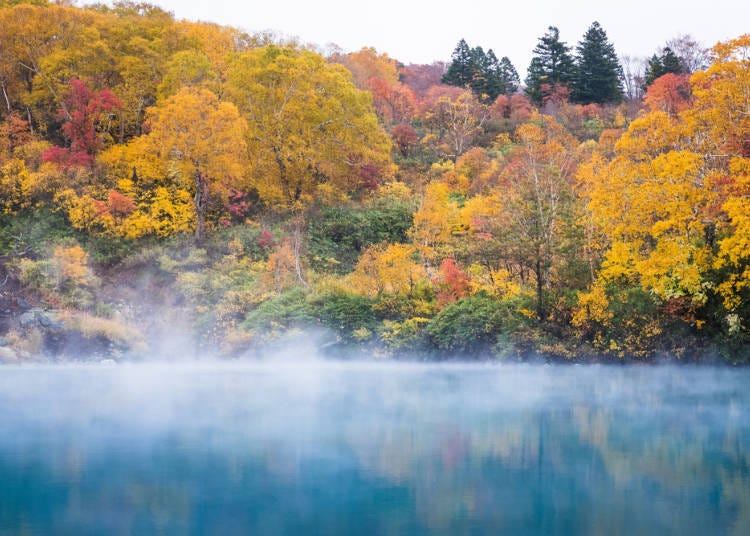 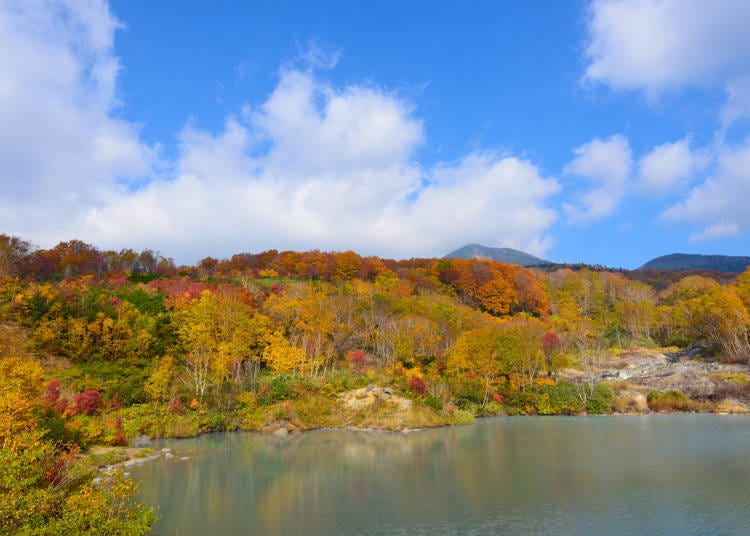 Near the hot spring inn Sukayu Onsen, in Hakkoda, there is a body of water with spring temperatures of 90 degrees, called Jigokunuma Pond (or Hell Pond). Water springs from a crater and, around mid-October, the surrounding Japanese pine trees, as well as the ornamental Chinese cabbages, will turn into splendid colors.

Against the backdrop of the steaming water swirling about in the air, the vividly colored autumn leaves are genuinely magnificent. On the way back, relax at the Sugayu Onsen in the large outdoor Sennin-buro bath. 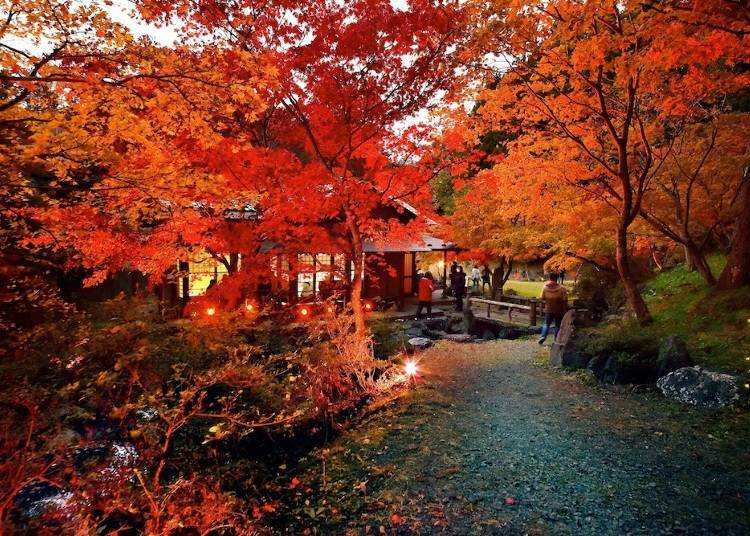 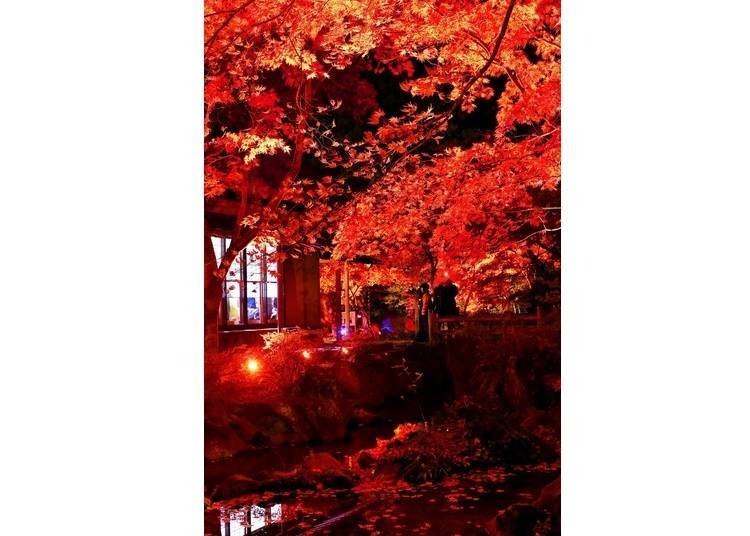 There are about 280 maple trees on the premises, which are in full color at the end of October. At night, the maples emerge from the dark thanks to the red, yellow, and blue illumination, creating a fantastic atmosphere. Tea ceremonies are also held inside, making a visit even more worth it.

Aomori in autumn is incredible. Choose the perfect kind of Aomori autumn foliage experience for yourself. Find the ideal location and the best daytime or nighttime vibe, fully immersed in nature, or surrounded by natural beauty as well as architecture. Be sure to visit Aomori Prefecture next autumn for unique and rare spectacular sights!

Autumn in Japan: Fall Foliage Calendar & Forecast
*This information is from the time of this article's publication.
*Prices and options mentioned are subject to change.
*Unless stated otherwise, all prices include tax.