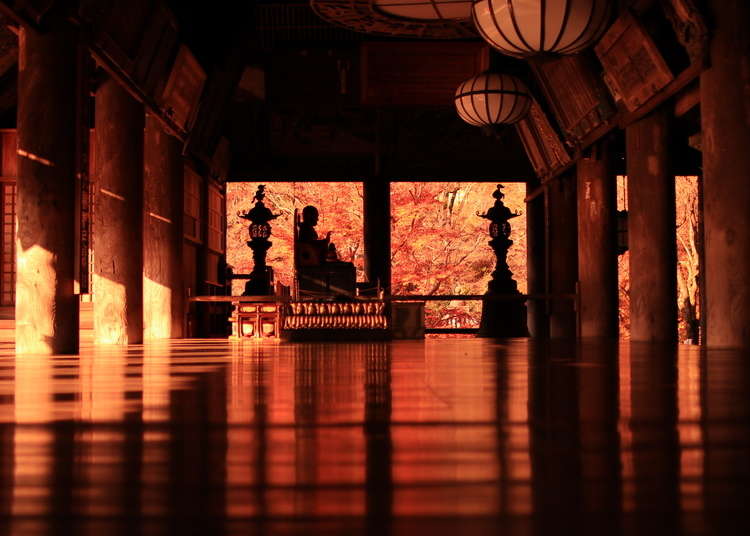 Fall foliage in Nara is incredible! One of the most enjoyable marks of autumn is the sight of leaves changing color. The ancient capital of Nara is packed with spots to enjoy Japan’s renowned fall foliage.

From around mid-October, leaves in Nara will gradually change color, transforming Nara Park, Mt. Yoshino, and dozens of other historical shrines, temples, and mountains into the ultimate locations to experience the dazzling spectacle of autumn in 2021!

What is the best time to see fall colors in Nara?

While Kyoto is often in the foliage spotlight, you won't want to miss autumn colors in Nara, which is about half an hour south of Kyoto. The best time to see fall colors in Nara is from late November to early December.

1. Nara Park: Spot Hundreds of Local Deer Among the Fall Foliage in Nara 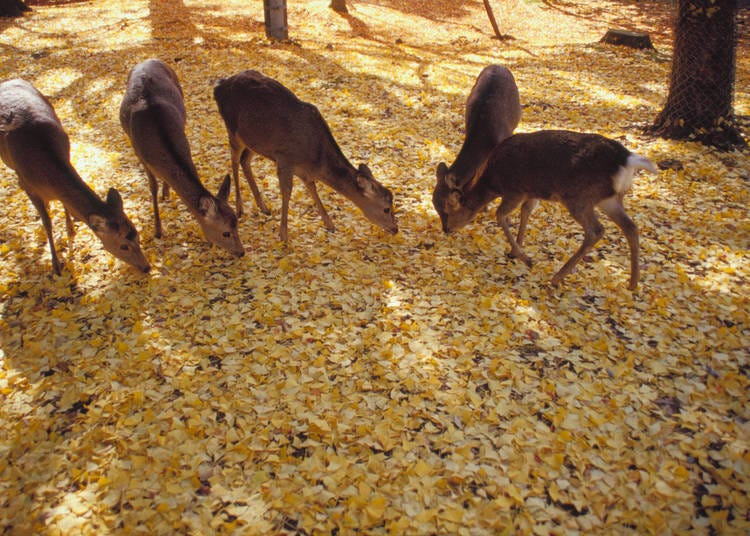 Nara Park can be found on the east side of Nara City. Spanning a whopping four kilometers east-west and two kilometers north-south, this natural park is home to hundreds of deer and several shrines and temples - including Kasuga-taisha Shrine, Kofuku-ji Temple, and Todai-ji Temple.

It also holds the Shoso-in storehouse, where the numerous treasures held inside are exhibited every year from the end of October to the beginning of November.

Nara Park’s stunning fall foliage provides a captivating contrast between its numerous evergreen trees. As autumn lines up with Shoso-in’s treasure exhibition, the area becomes absolutely packed with sightseers, so do plan ahead! 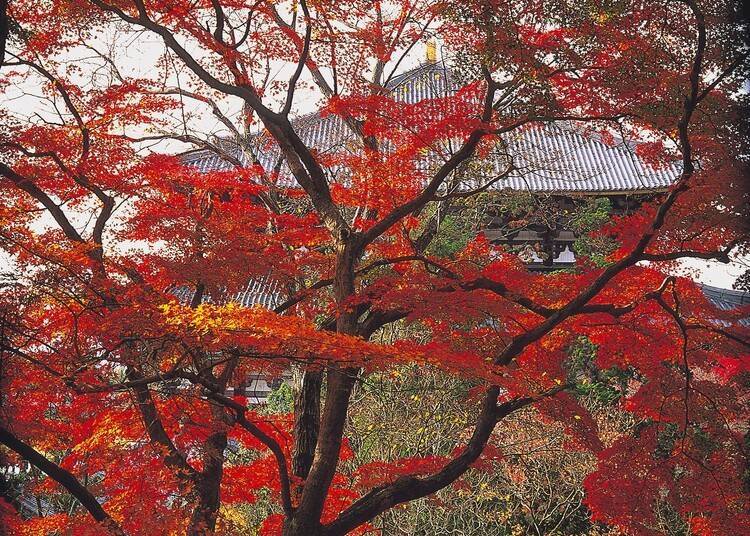 The best photo spots in Nara Park are here!

If you’re after a winning autumn photo, the spacious grounds of Todai-ji Temple are packed with extremely photogenic fall leaves! The scene is best captured from across the Daibutsu-Ike Pond, where the burning red colors can be contrasted against the muted hues of the Great Buddha Hall.

Of course, you’ll also want to get a photo of the deer framed by autumn leaves! For this, we recommend heading to Tobihino or Kasuga-taisha Shrine. Passionate photographers should also check out Sagiike Pond and the eye-catching hexagonal Ukimi-do hall standing in its water. 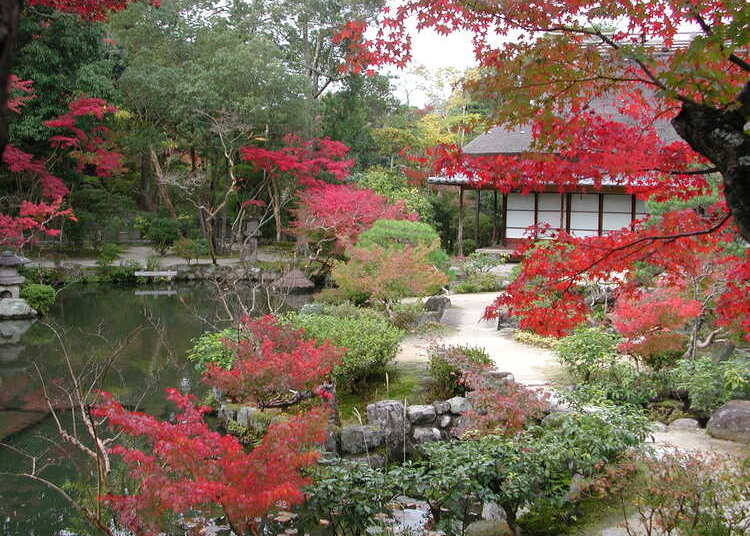 The glorious Isuien Garden is nestled between two of Nara’s most important temples - Todai-ji Temple and Kofuku-ji Temple.

The front section of Isuien Garden, constructed in the early Edo period, and the inner garden, added during the Meiji Restoration, both feature tranquil ponds encircled by a path perfect for relaxing strolls. For the keen eye, their subtle differences in construction brilliantly highlight the trends of their respective eras.

The gardens have become an international hit, with thanks to their design and expansive layout. You'll love strolling around the grounds and enjoying the natural scenery.

While standard photos of the area frame the garden’s glorious autumn colors from the traditional Sanshu-tei restaurant, our recommended angle is from the front of the pond with Sanshu-tei as the background. 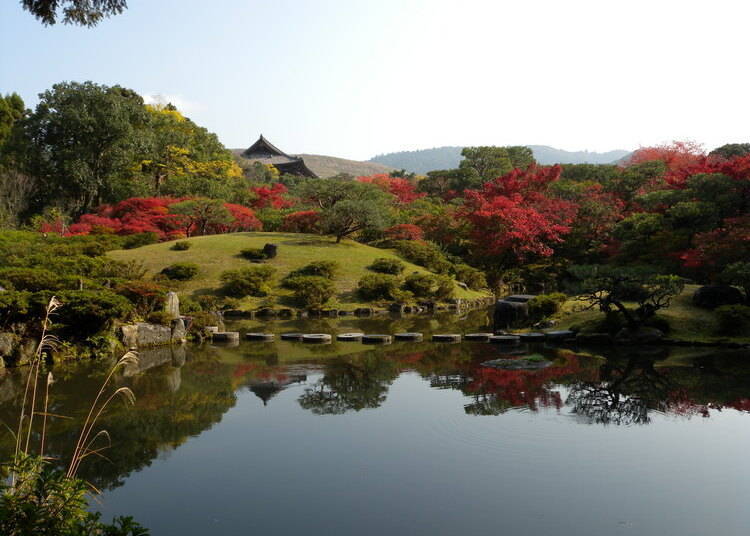 From the right side of the inner garden are sweeping views Mt. Mikasa, Mt. Kasuga Okuyama, Mt. Wakakusa, and Todai-ji’s Nandai Gate. During mid to late November, the park is decorated by spectacular red foliage from native trees that elevate the beauty to astonishing levels! 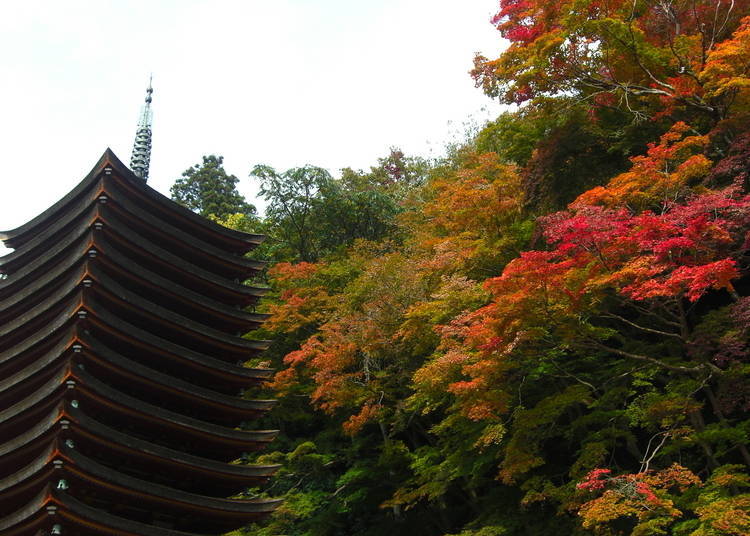 Tanzan Shrine, which deifies the founder of the Fujiwara Clan, Fujiwara no Kamatari, is in a lavishly forested area renowned across Kansai for its colors - and is among the best fall foliage in Nara.

Here the legendary Fujiwara discussed and planned the Taika Reformation with the man who would become Emperor Tenji. The shrine was thus nicknamed ‘Katarai Yama,’ meaning ‘the mountain of discussion,’ which evolved into its current name, written using the characters for ‘discuss’ and ‘mountain.’

Within the grounds is a shrine said to be the original model for the World Heritage Nikko Tosho-gu shrine in Tochigi, along with the one-and-only existing wooden thirteen-story pagoda and 17 other impressive buildings, are all designated important cultural properties.

During autumn, over 3000 trees bury the mountains in a red blaze, making it appear like a scene from a painting. Seeing the famous pagoda and shrine buildings rising out of the sea of red illuminated by the western sunlight is breathtaking.

The peak of this spectacular spot for fall foliage in Nara is generally from mid-November to the beginning of December. 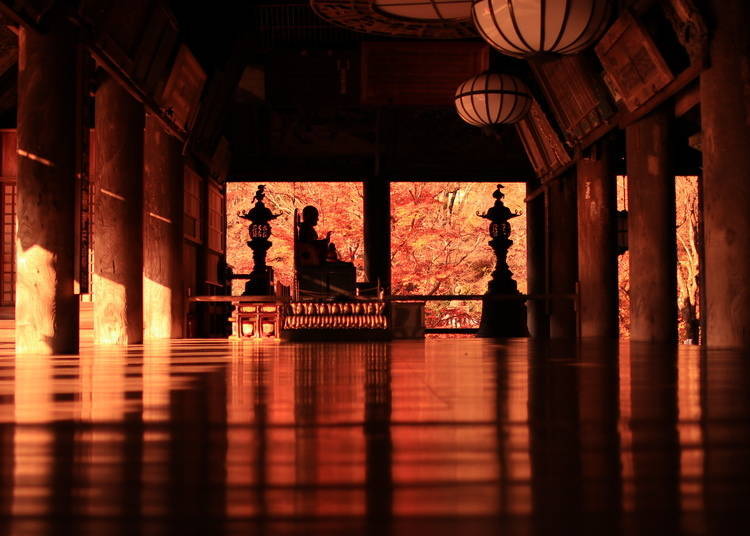 Mt. Hase presents sweeping views of the Hase highway, an ancient vein that once connected the Yamato and Ise Provinces.

It is also home to Hasedera Temple, one of the 33 sacred centers on the Saigoku Kannon Pilgrimage and the head temple of the Buzan-ha Buddhist sect.

This temple holds the largest wooden 11-faced Kannon statue in Japan - which is a whopping 10-meters tall! This sacred representation of Kannon has her standing on a pedestal while holding a staff in her right hand and a jug of water in her left, which has since become known as ‘Hasedera-style.’ 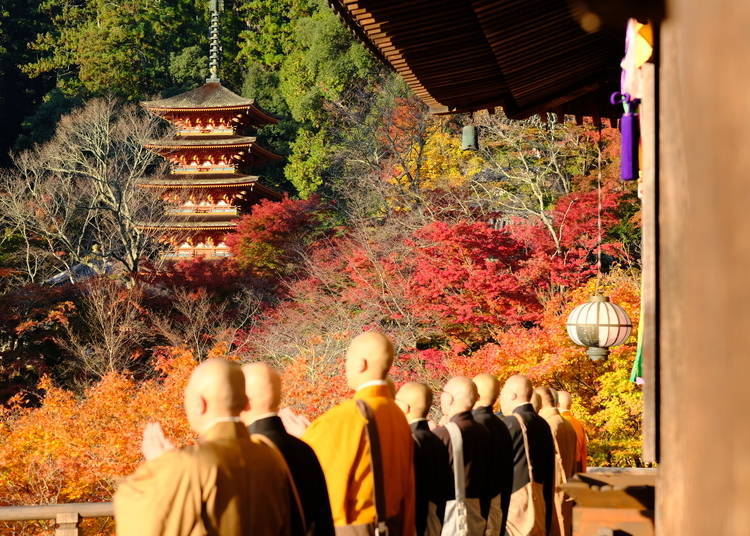 Hasedera Temple has long been called ‘The Temple of Flowers’ due to its stunning floral surroundings that include elegant foliage in autumn.

While the area’s beauty is boundless, we recommend viewing the scene from the outside decking of the main temple building, which is a designated national treasure. From here you can see spectacular views of 5-story pagodas in an ocean of red leaves. Peak time is mid-November.

5. Mount Yoshino: As Beautiful in Autumn as Spring 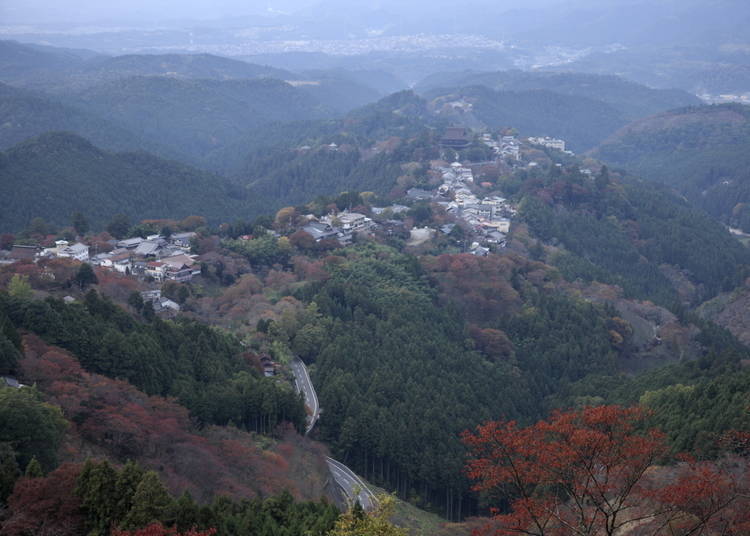 Mt. Yoshino is known as a contender for Japan’s most beautiful cherry blossom hotspot. However, this impressive region, which is not just a single mountain but a roughly 7-kilometer range running from the Aonegamine mountain to the bank of the Yoshino River, also puts on a fantastic autumn display!

Contrasting with the colors of spring, autumn covers the region with stark reds, yellows, and oranges. From late October to late November, these colors will slowly creep down the mountain, starting from the very top and finishing at the bottom, creating breathtaking views at this incredibly scenic spot for fall foliage in Nara.

6. Shoryaku-ji Temple: The ‘Village of Brocade’ 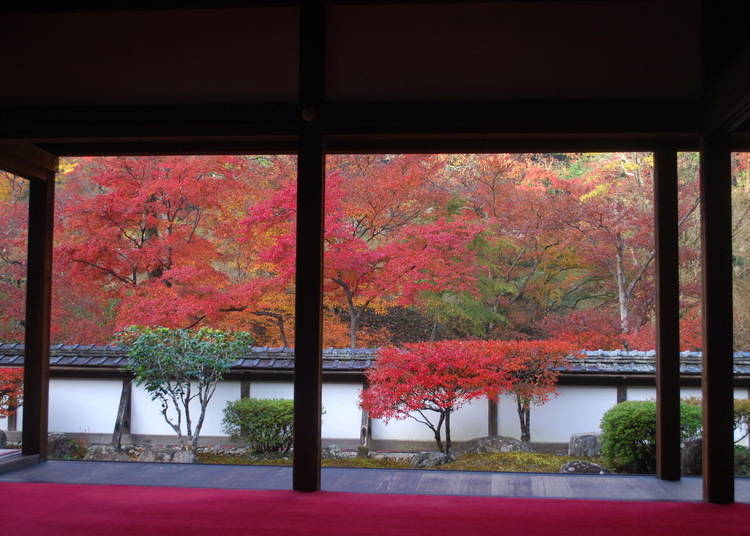 The amazing view from Fukujuin

The construction of Shoryaku-ji Temple was ordered by Emperor Ichijo and carried out by high Buddhist priest Kenjun, the child of famed Japanese politician Fujiwara no Kaneie.

The temple lies among the mountains in the suburbs of Nara City and is surrounded by more than 3000 maple trees that gradually change color from the beginning of November.

The treetops are a mix of green, yellow, and red, creating an enchanting blend said to be reminiscent of intricately woven brocade fabric - thus earning the nickname ‘Village of Brocade.’

From around the same time until the end of winter, over 1000 shrubs of nandina lining the shrine path bear red berries, adding extra brightness to the fiery display!

The main temple holds a special public event from the beginning of November, where a statue of the normally concealed ‘Medicine Buddha’ is unveiled to the public. The autumn views overlooking the garden from nearby Fukujuin are also spectacular. 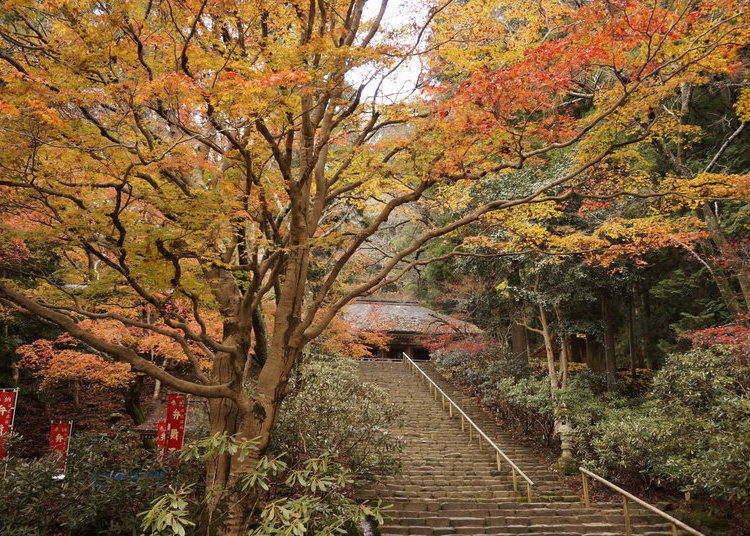 The foliage from Yoroizaka heading towards the main temple

Muroji Temple is a mountain monastery of Shingon Buddhism originally established during the Nara era by monk Kenkyou of Kofuku-ji before being rebuilt by Kukai.

Even long ago, the monastery welcomed female worshipers, with women from all over the area congregating to pray. It thus earned the nickname ‘The Mt. Koya for Women.’

Besides being the home of numerous cultural heritage items, this historic monastery’s lavish surroundings beget stunning views throughout the seasons. Its amazing autumn colors, which peak from mid-November to the beginning of December, can be appreciated from dozens of viewing points.

Most prominent is the shrine road, which begins with an arched bridge at the entrance and finishes at a 5-story pagoda, along with the steep steps of the magical Yoroizaka. 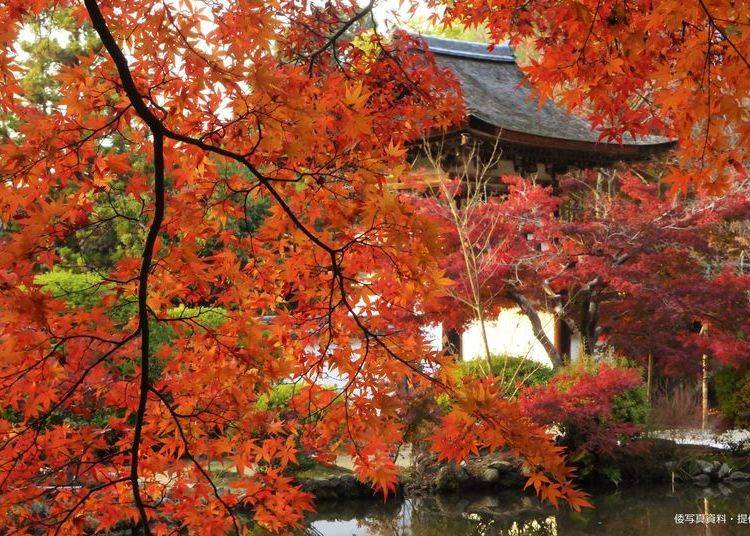 Constructed at the wish of Emperor Junna by the famed monk Kukai, Chogaku-ji is an ancient temple sitting on a mountain pass. The temple’s spacious 4 hectares hold Japan’s oldest bell tower gate and many other national treasures, along with a pleasing array of year-round colorful flowers!

There’s nowhere better to appreciate its magnificence than from the main temple’s veranda, which overlooks the entire scene. During the season for fall foliage in Nara, the powerful ‘Painting of Hell’ (a designated ‘Cultural Property of Nara’) is exhibited, complimented by periodic explanations by the head priest. The peak autumn period is mid to late November. 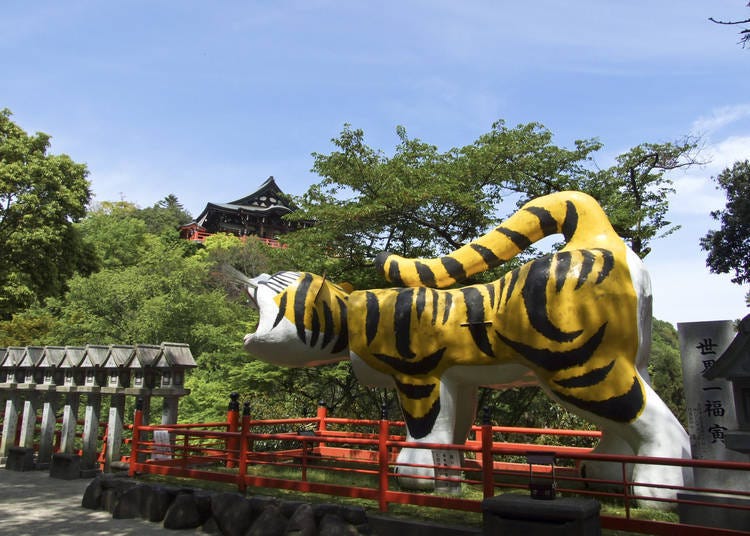 Halfway up Mt. Shigi (437m) is Chogosonshi-ji Temple. Named from Japanese phrases meaning ‘you must believe, you must respect,’ this mountain bears the legend of Bishamonten’s first appearance in Japan.

One of the four heavenly kings and an important figure in Japanese Buddhism, Bishamonten is said to have appeared before Prince Shotoku and led him to the battlefield. This miracle occurred during the hour of the tiger, on the day of the tiger, in the year of the tiger.

This resulted in the temple’s reverence of tigers, believed to be a god of protection. Now the shrine’s symbol, various paper-mâché ‘lucky tigers,’ not seen anywhere else in the world, can be spotted throughout the temple grounds! 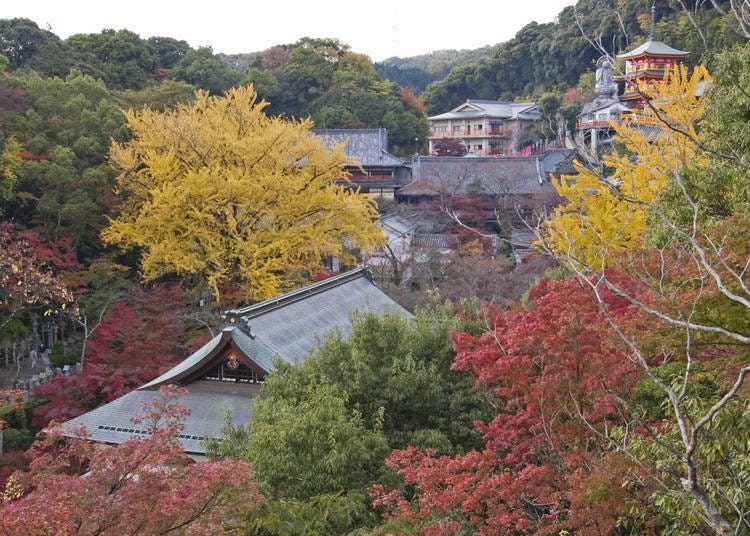 To see over 1000 Japanese maple trees at their brightest, visit between early November to early December.

10. Mitarai Valley: The Most Beautiful in Nara! 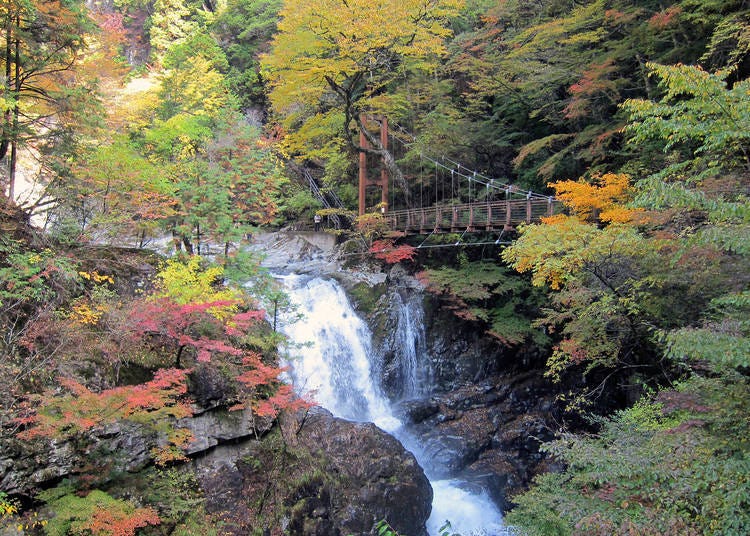 The beauty of the Mitarai Valley’s dozens of waterfalls and boulders is heightened by its transparent emerald-green water. This year-round beauty is only surpassed during autumn, whereby the depth and variety of color are multiplied by the various species of maple trees that slowly change color beginning from the valley’s peak.

Everywhere you look, your vision will be dominated by the dynamic combination of brilliant autumn leaves, majestic waterfalls, and fascinating boulders! Definitely don’t miss out on crossing the suspension bridge in the Mitarai Valley Promenade, which provides the best views by far! Peak autumn colors are generally in mid-November.

Now you know ten spots for fall foliage in Nara - we hope we’ve given you enough inspiration to make your autumn Japan trip one to remember!

This list is comprehensive, reaching from the streets of Nara City to the dense forests of Tenkawa, so you now know as much as the locals do! To top it off, Nara’s deep history as the ancient capital of Japan means its temples have deep autumn traditions, providing even more reason to visit during this fantastic season!

Don’t forget to check out online about light-up events and other fun activities held during this time.

Autumn in Japan: Fall Foliage Calendar & Forecast
Visiting Nara Japan: 9 Essentials to Know Before Traveling to Japan's Ancient Capital
Browse & Book ▶ Popular Sightseeing Tours in Nara
*This information is from the time of this article's publication.
*Prices and options mentioned are subject to change.
*Unless stated otherwise, all prices include tax.