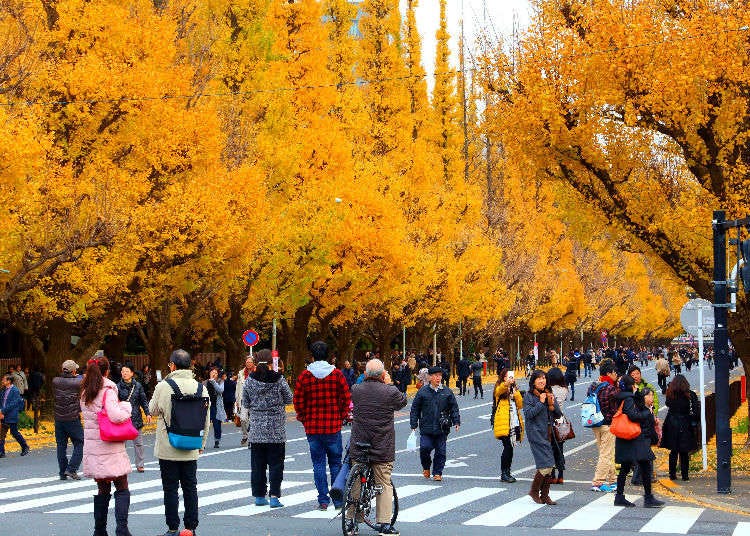 Autumn in Tokyo 2021: 16 Best Places for Fall Foliage in Tokyo

Autumn in Tokyo is spectacular. Its many different colors is a magnificent sight to behold. Also called 'momiji' or 'koyo' in Japanese, autumn leaf viewing is done since ancient times. This colorful scenery cannot only be seen in Tokyo's surrounding areas, but also in the urban jungle of the Japanese capital itself.

We will introduce the best viewing spots in and outside of the city, to make sure your autumn will be a vivid one!

1. Hibiya Park: a Huge Ginkgo Tree in the Heart of Tokyo

Hibiya Park, opened in 1903, was Tokyo’s very first Western-style park. Its flowerbeds are lush, thick, and colorful, blooming all around the year in all sorts of different colors. It’s a real oasis directly in the busy heart of Tokyo.

When it comes to autumn in Tokyo, one of the park’s highlights is the so-called “risky ginkgo.” It’s Hibiya Park’s largest ginkgo, said to be between 400 and 500 years old, and it almost fell victim to the initial creation of the park.

Its main designer, however, said that he would relocate this tree, “even if it cost him his neck,” meaning his career. Ever since then, the massive, beautiful tree is known as the risky ginkgo, dominating the scenery with its many tallow leaves. See it in all its magnificence from the end of November to early December. 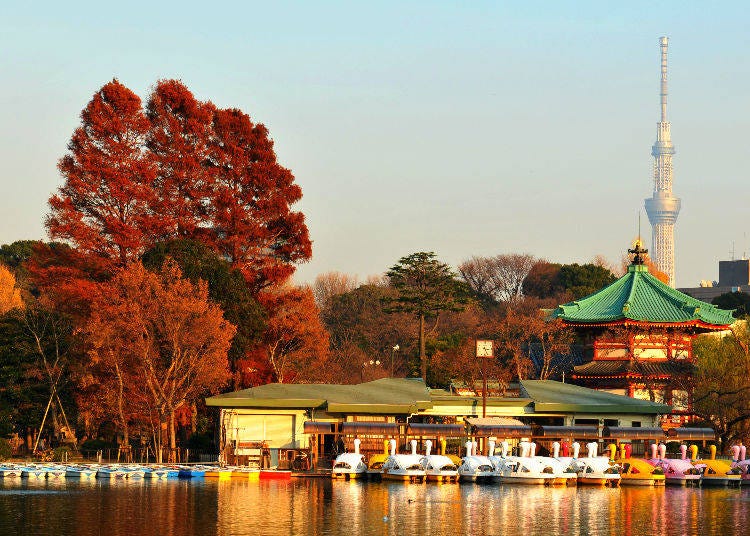 Ueno Park might be best known as one of the city's favorite cherry blossom spots. But in autumn in Tokyo, its scenery is equally breathtaking.

Follow a colorful avenue lined by zelkova and ginkgo trees from the main gate of the Tokyo National Museum and enjoy deeply dyed maple leaves around Kiyomizu Kannon Temple and Saigo Takamori Statue. It’s a spectacle of, red, yellow, and gold! The best time to do Japanese-style autumn leaf viewing is from early November to early December. 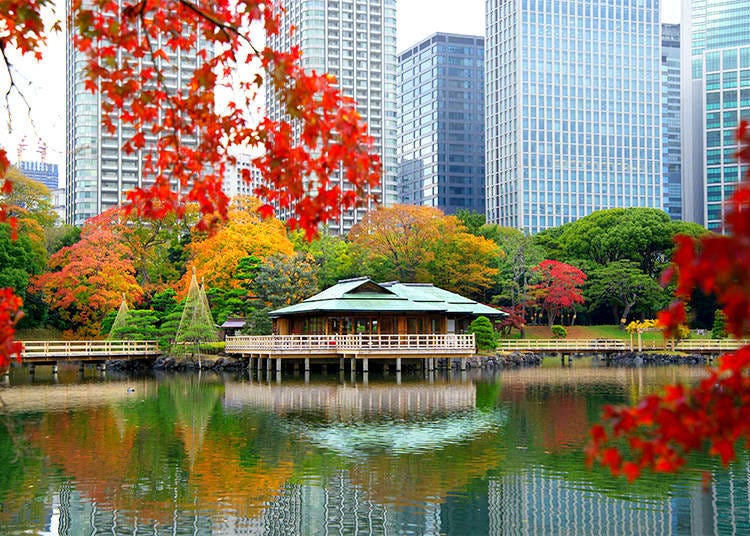 The beautiful Hamarikyu Gardens once belonged to a feudal lord of the Tokugawa family. Today, the lush spot serves as a natural respite for both Tokyoites and tourists, offering calm respite in the middle of the urban jungle that is Tokyo.

In autumn, various maple trees change the park’s appearance to a deep red and a golden yellow. Especially the background of modern high-rise buildings make the scenery of Hamarikyu Gardens as beautiful as unreal – one of the absolute must-see spots for your Tokyo sightseeing in fall. For the most magnificent view, visit the garden between mid-November and early December. 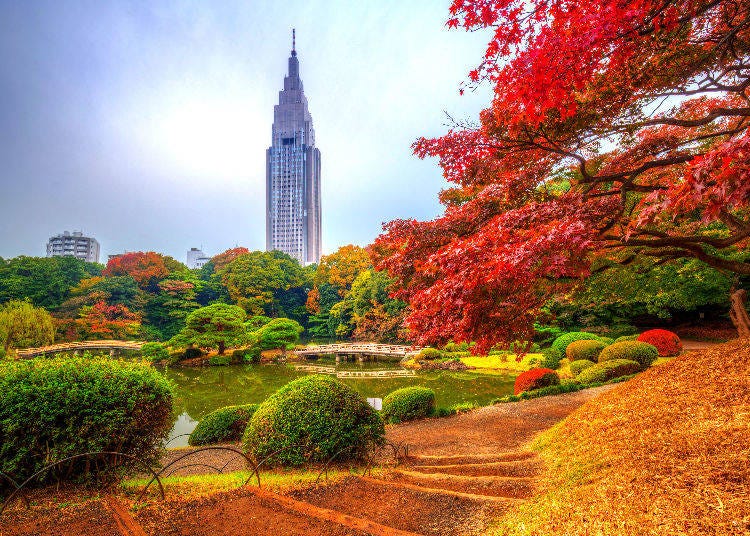 Shinjuku Gyoen National Garden is famous for its three distinctive gardens, combined into one beautiful park. The Japanese Garden will charm you with its deep red maple leaves, while the British Garden shimmers in ginkgo gold. The French Garden evokes the romantic image of a European fall. Visit Shinjuku Gyoen National Garden between mid-October and mid-December to make the most out of the unique sceneries.

When you see pictures about autumn in Tokyo, this avenue will immediately come up. From the Aoyama Nichome intersection to the outer gardens of the Meiji Shrine, there's a three-hundred meter long avenue lined with tall ginkgo trees that is one of Tokyo's most popular autumn viewing spots for golden leaves. The entire road features a total of 146 trees making for a stunning tunnel of gold all towards the shrine gardens.

With the majestic Meiji Memorial Picture Gallery in the background, the golden leaves and blue autumn skies look like a painting. The ginkgo trees turn gold every year from mid-November to early December. 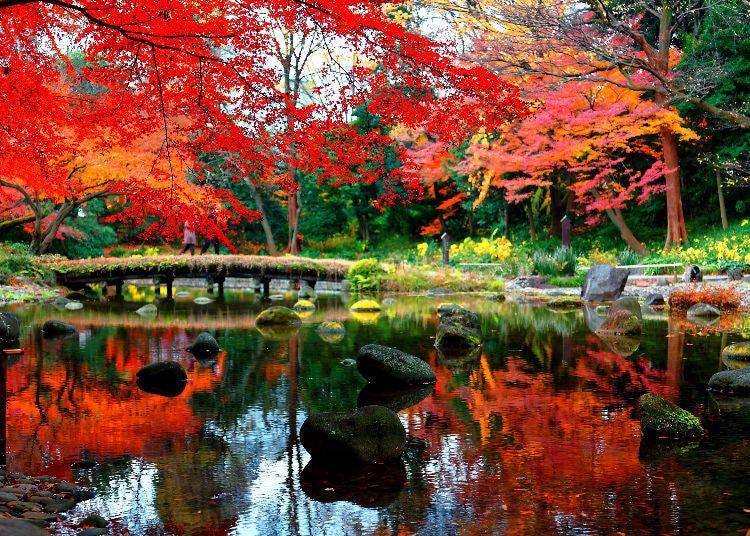 One of Tokyo's oldest gardens, Korakuen, was built by the Tokugawa lord of the Mito domain in the early Edo period as a circular-style garden, featuring both a pond and a hill. Japanese maple, wax trees, Japanese zelkova, and the many ginkgo trees are dyed beautifully from late November to early December, creating a particularly traditional Japanese scenery.

There are two viewing spots inside the garden that we'd like to recommend. One is along the Oigawa River that was created to resemble Kyoto's Arashiyama. The other one is the bridge called Togetsukyo behind the Kantoku pavilion, from which the view on the vivid maple trees is especially beautiful. 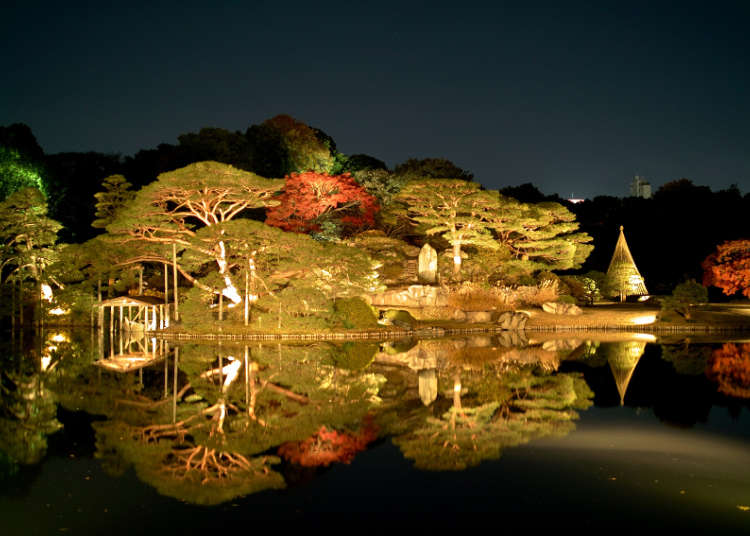 It took seven years to complete this breathtakingly beautiful Japanese garden that was built for the 5th shogun of the Tokugawa clan. Rikugien is home to over four-hundred individual maple trees, along with many ginkgos and zelkovas.

From the 18th of November to the 6th of December, the vivid park will be lit up in the evening, creating an enigmatic, dreamlike scenery. Around this time, the park is open until 9:00 p.m. (last admission is 8:30 p.m.), making it the perfect spot to enjoy a magical autumn evening.

8. Mizumoto Park: The Rare Colors of the Dawn Redwood 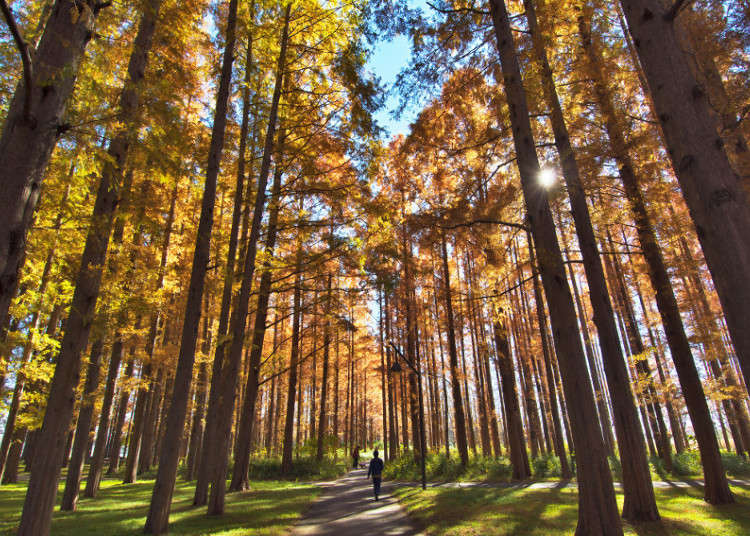 Mizumoto Park is the biggest riverside park in the entire metropolitan area of Tokyo. During autumn, its highlight is the around 1,800 dawn redwood trees, also called Metasequoia, and their beautiful autumn foliage. Next to the central square of the park is the "Metasequoia Forest" which is home to over 1,800 redwood trees, most of them larger than twenty meters in height!

The contrast between the clear blue sky and the reddish leaves is an enchanting scenery. The large, colorful trees are also reflected on the surface of the nearby pond, making a stroll through Mizumoto Park one of many different sights. We recommend visiting between late November and early December.

The main attraction of this park, however, is the ginkgo alley that stretches on for about three-hundred meters, lined with one hundred trees that are over twenty meters high! When autumn comes, the vivid leaves fall to the ground and create a stunning golden carpet of foliage.

After strolling along the golden avenue, why not pay a visit to the Japanese garden and its many maple trees? The best time to see the ginkgo alley is throughout November, while the Japanese garden is the most beautiful from late October to mid-November.

10. Yoyogi Park: A Colorful Contrast of Yellow and Red 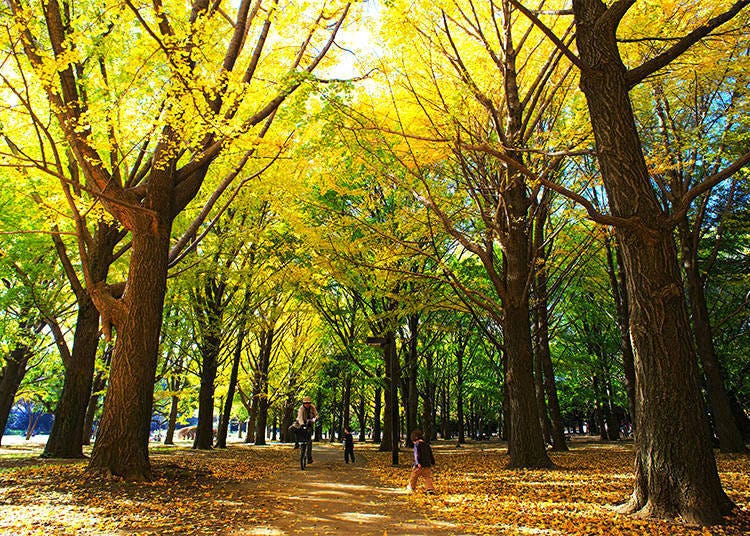 Shibuya’s spacious Yoyogi Park is the 5th largest park in Tokyo’s 23 wards. Once, it was the athletes’ village of the Tokyo Olympics in 1964, but after the games were over, the area was turned into a public park.

The Harajuku Gate of the park is framed by bright yellow ginkgo leaves, while the park’s main fountain is surrounded by deep red – a beautiful contrast that is characteristic for autumn in Japan.

Why not rent a bicycle at one of the various rental places in the park and enjoy the clear air of autumn while cycling under dyed trees? (210 yen per hour). The prime time to admire Yoyogi Park’s momiji glory is from the end of November to mid-December.

11. Mount Takao: Through a Colorful Tunnel 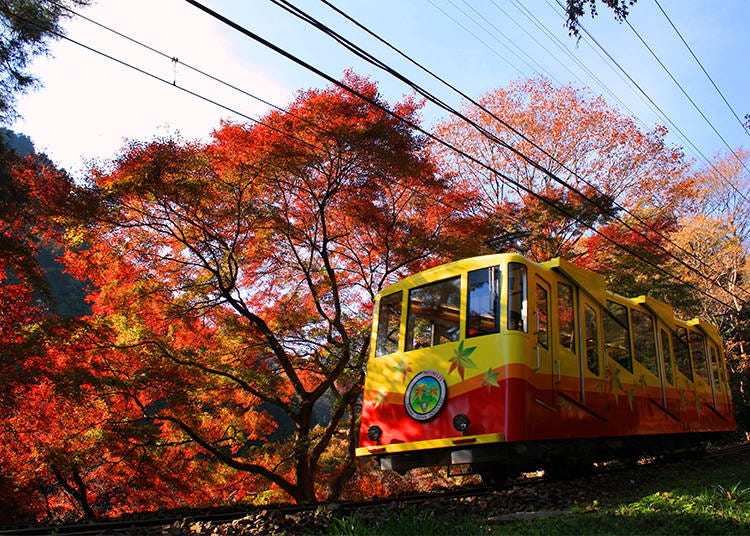 It takes just about one hour by train to reach Mount Takao from Tokyo, making the mountain a beloved sightseeing and outdoor spot for locals and tourists alike. It is a spot of lush nature, with fresh air and the song of birds and insects in the air.
Autumn dyes Mount Takao is especially spectacular colors. From the summit to the valley, the entire mountain shines in vivid red and golden yellow, a stunning scenery that is best admired from the cable car running between Kiyotaki Station and Takaosan Station. When you look out of the cable car’s windows, it’ll seem like you’re traveling through a tunnel of autumn leaves! The best time to go is between mid- and end of November.

12. Hikawa Valley: Taking an Autumn Stroll along a Clear Stream 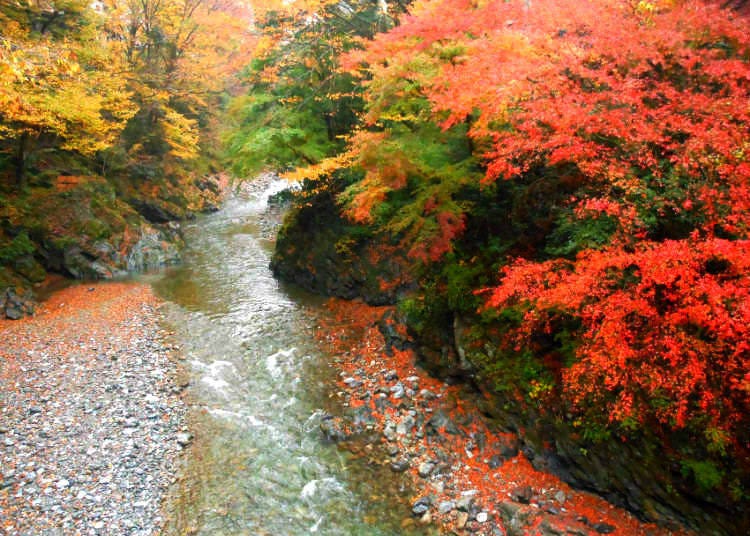 The next spot is about one hour and forty-five minutes away from Shinjuku Station and lies in the northwest of the Tokyo area: the city of Okutama. The Tama River flows through the center of this town surrounded by numerous autumn color viewing spots, such as Okutama Lake and one of Japan's one-hundred most famous mountains, Mount Kumotori.

Starting from Okutama Station, there is a beautiful promenade of four kilometers circling the Tama and Nipparagawa Rivers, as well as Mount Atago. Stroll along this path while breathing the clear autumn air and taking in the many colorful sceneries of a mountain village. Especially the area where the Tama and Nipparagawa Rivers meet is well worth the visit: maple trees, Japanese Judas trees, and ginkgo hang their vividly colored branches over the clear streams, making for an excellent viewing spot. 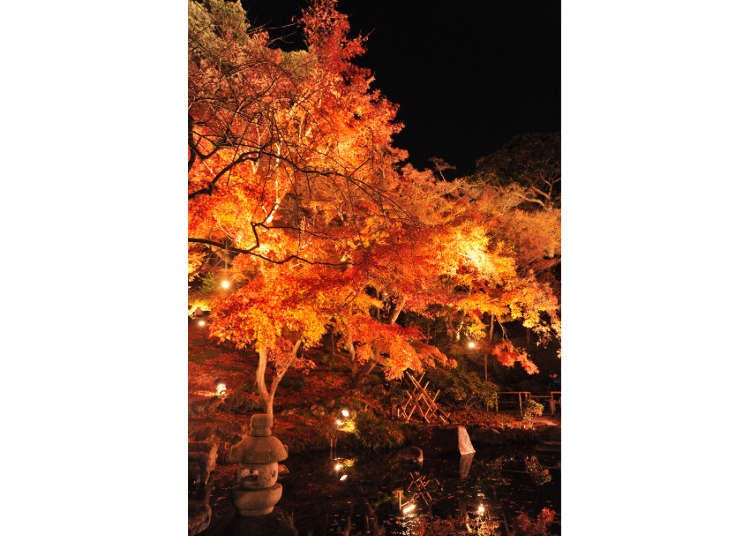 The combination of old temples and vivid autumn leaves is an image that is usually linked to Kyoto but stunning sceneries like that can also be found in Kamakura. Examples of these religious viewing sites include Enkaku-ji, Jochi-ji, the Tsurugaoka Hachimangu, Kencho-ji, Meigestu-in, as well as Hase-dera, which is the most popular.

Hase-dera is an ancient building, dating back to the year of 736, and is home to one of Japan's largest wooden sculptures: the eleven-headed Kannon statue. Ginkgo and Japanese maple color the temple ground beautifully around the end of November. Once the sun has set, the entire temple is lit up by numerous illuminations, shining colorfully against the night sky.

Save with The Greater Tokyo Pass: Discover More with Unlimited Train and Bus Rides!
Book Now ▶ Best things to do in Tokyo
*This information is from the time of this article's publication.
*Prices and options mentioned are subject to change.
*Unless stated otherwise, all prices include tax.