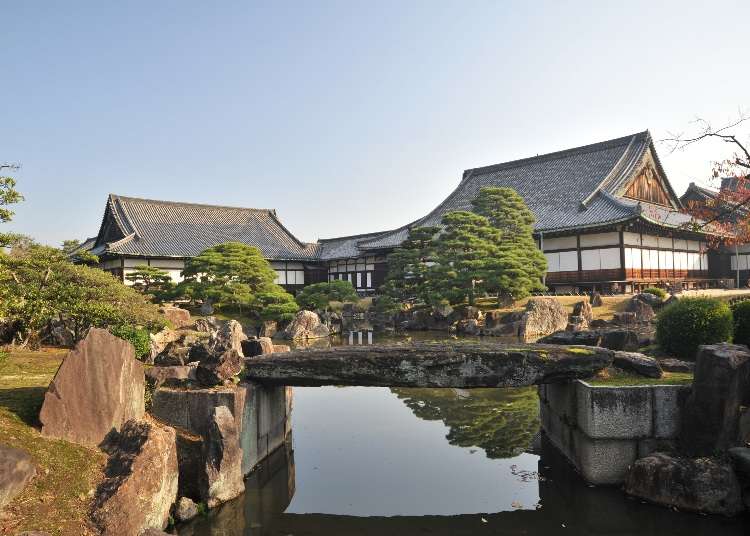 Nijo Castle: Guide to the Castle, Gardens, and Palace Shoguns Once Lived In (Access & Tickets)

Nijo Castle is one of Kyoto’s world-famous UNESCO World Heritage sites, constructed in 1603 by Ieyasu Tokugawa - the first shogun of the Edo Period.

During the age of the third shogun, Iemitsu Tokugawa, Nijo Castle underwent significant renovations to accommodate Emperor Go-Mizunoo. This is when murals drawn by Kano Tanyu were commissioned, among other artworks. Today, the well-preserved buildings of Nijo Castle and Ninomaru Palace are masterpieces that draw visitors from around the world.

Let’s take a look at the history of Kyoto's Nijo Castle, enjoying the glamorous outfits and beautifully kept gardens!

Getting to Nijo Castle and best time to visit

How much does it cost to go to Nijo Castle?
Admission is 620 yen for adults, and an additional 410 yen is charged for admission to the Ninomaru Palace.

Self-guided audio tours in English, Chinese, Korean, French, Spanish, and German are available at a kiosk inside the main gate and cost 520 yen to rent.

Nijo-jo Castle offers guided tours in English conducted every day the grounds are open. (Note: As of 2021, these tours are currently suspended due to Covid-19.)

You have to check out the Kano school murals in the Ninomaru Palace! 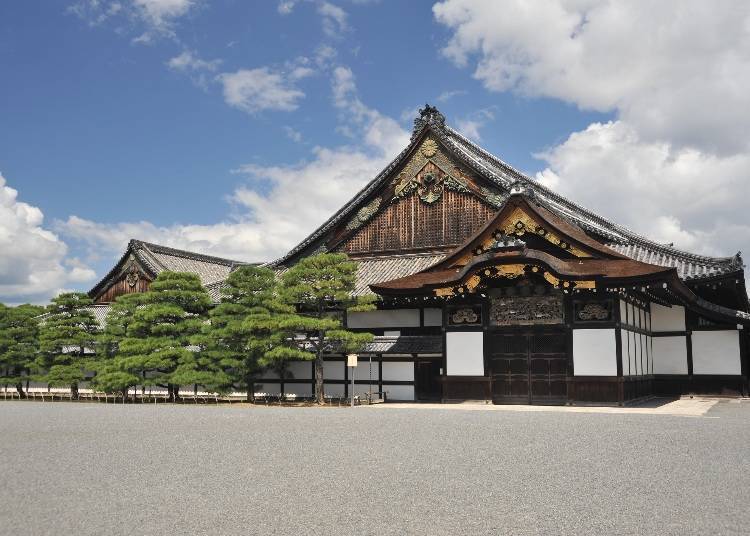 After entering Nijo Castle through the large east gate and stepping through another grand one to get to Ninomaru Palace, you’ll find that it’s a valuable site as an example of early Edo period residential architecture. Its uniqueness has earned it the privilege of being the only palace within a castle to be designated as a natural treasure.

Inside, you’ll find the Tora no Ma, a room for guests to wait in, the Shikidai, the place where the news would be announced to the shogun, and the Ohiroma, where the last scene of the Edo period played out.

Past the Orhioma, you can find the public Kuro-shoin (where the Shogun would meet with high-ranking officials), as well as the shogun’s private Shiro-shoin (private quarters for the Shogun).

If there’s something you have to see in Ninomaru Palace, it would be the murals by Karino Tanyu’s school. Foremost is the painting of a hawk on pine branches, as well as beautiful paintings of tigers, leopards, cherry blossoms, and other seasonal flowers.

The gold-decorated wall virtually glowed before all who saw it, displaying the shogun’s authority. The partitions between the rooms and on their upper parts have lavishly made sculptures and decorations, giving the interior a glamor befitting of the shogun’s quarters.

The nightingale corridors that make the sound of a bird’s chirp when walked through are also of note. 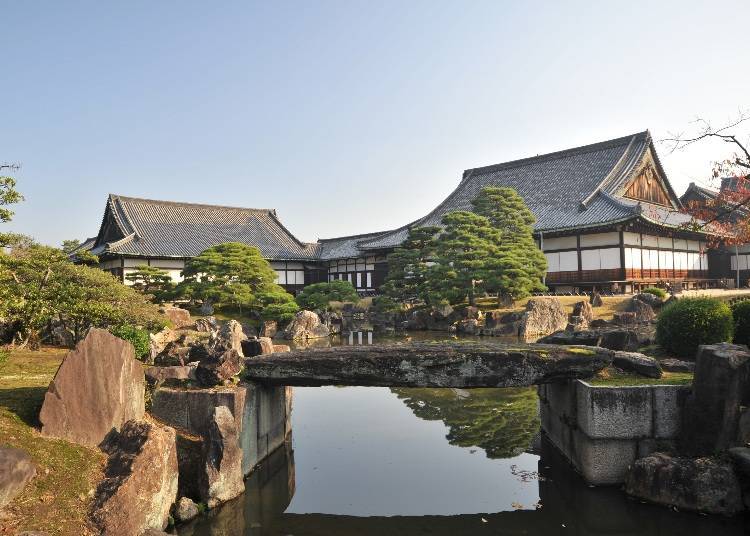 The Ninomaru Garden was constructed for Emperor Go-Mizunoo under the orders of Enshu Kobori in 1626. The garden has a large bond with three islands, in the style of Shoin gardens of the time.

However, when Nijo Castle became the emperor's villa in 1884, the garden underwent large-scale renovations, ending in its current shape. The well-placed rocks and 150-year-old sago palms are worth seeing. 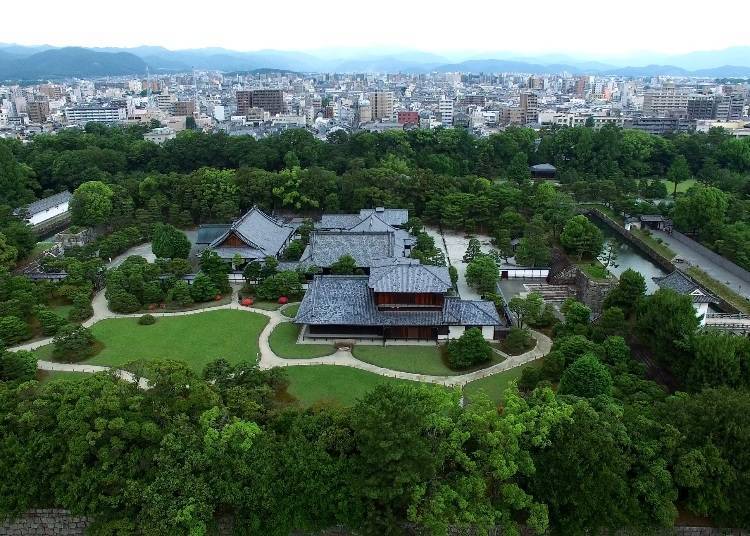 General visitors aren't allowed inside the Honmaru Palace, but you can pass through the Honmaru Garden. The garden has been made with artificial hills, grass, and a curved path to resemble a western garden. The hills have azaleas planted on them, allowing viewers to enjoy their flowers from the end of spring to the beginning of summer.

A view of Kyoto from the tenshu remains 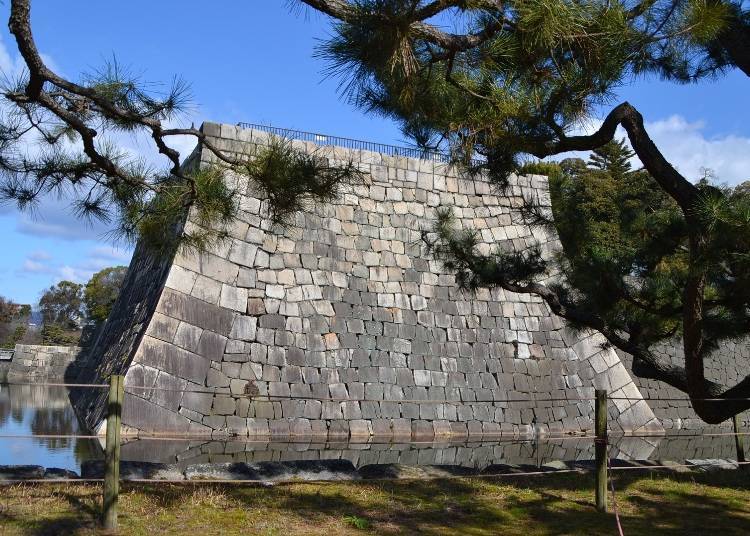 In the southwest corner of the Honmaru, you'll find stone steps that lead to Nijo Castle's tenshu (main castle tower) remains. Initially, Nijo Castle had a five-storied tenshu, but the tower was moved to Yodo Castle during the Edo period renovations. The tenshu remains seen here originally belonged to Fushimi Castle. in 1750, it was struck by lightning and burned down, leaving only the walls remaining.

You can view the Honmaru Palace and Honmaru Garden from these remains, as well as parts of Kyoto, Mount Hiei, and Mount Atago. The spot has a far-reaching view during clear days in winter, giving it popularity.

Seiryu-en Garden: A blend of east and west in gardening 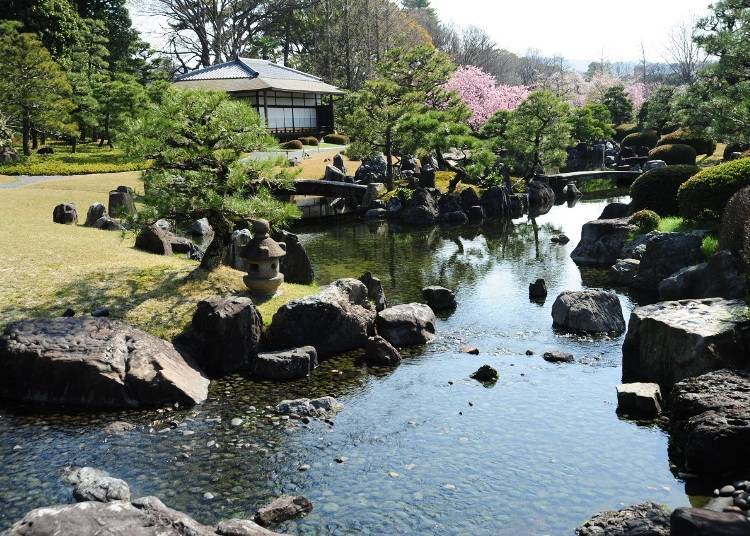 On the north side, you'll find a garden, Seiryu-en. This is where the tenshu tower was said to be when Nijo Castle was first built. When the castle was renovated, and the tenshu tower was moved, a residence for shogunate officials was built to replace it, but this was demolished halfway through the Meiji era and replaced with a garden.

The current Seiryu-en was established in 1965, inheriting parts of Ryoi Sumino's residence, rocks, and trees. The west side is a Japanese-style garden with a trail around the pond, while the east side is a western-style garden with a grass lawn. There's a rock that looks like a lion at the border of the two gardens, so do try to find it.

Enjoy a matcha café after your castle trek at Sanoah 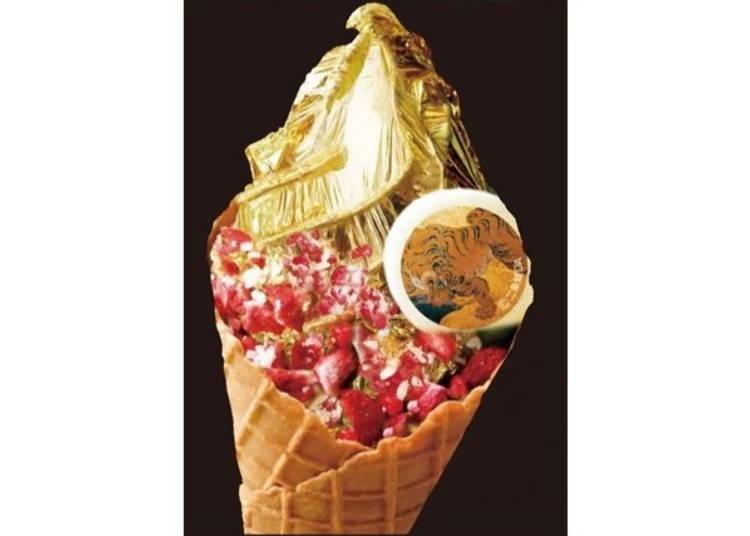 After enjoying a walk around Nijo Castle, take a break in the rest area. In the rest area's GREEN CAFE STYLE Sanoah, you can enjoy sweets made with Kyoto-sourced tea. The most popular item is the Golden Soft-serve, the color of which is fashioned after the gold leaf that decorates the furniture in Nijo Castle. 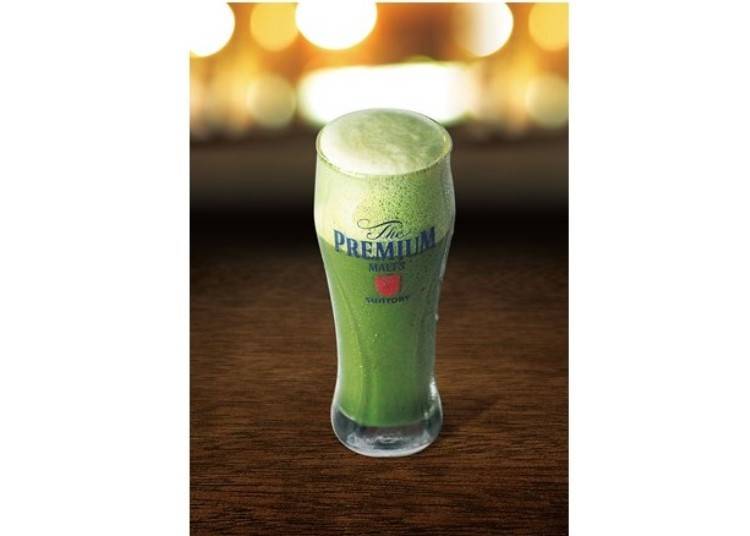 Its matcha-flavored soft serve ice cream has a thin layer of gold leaf, said to be sourced from the same gold powder used in the construction of Nijo Castle. The green tea ice cream is only just sweet enough and will hit the spot if you're tired from walking.

Another item of note is the Matcha Beer, a beverage with a beautiful, eye-catching matcha-green color. The beer's light bitterness matches wonderfully with matcha's refreshing taste.

What do you need to look out for when visiting Nijo Castle Kyoto?

Being a protected cultural site, photographs and videos within the Ninomaru Palace are forbidden. You can film and photograph outside, but the use of cameras with stands is forbidden. Also, since most of the paths are made of gravel, you'll want to wear some comfortable shoes.

Kyoto: 5 Best Popular Sightseeing Spots to Visit Along with Nijo Castle
Guide to Recommended Highlights for Visitors to "Kiyomizu-dera", Kyoto's Most Prominent Sightseeing Location!
1000 Statues of Kannon to Greet You, and Just a Short Walk from Kyoto Station - A Guide to the Best Features of Sanjusangen-do Temple
Unravelling the History of World Heritage Site Ginkaku-ji Temple and Its Must-See Spots!
Kyoto Highlights: See, Eat, and Shop Your Way Through Kyoto!
Kyoto International Manga Museum: Inside Guide to the Manga Fans Paradise!
Planning an Autumn Trip to Kyoto? 5 Things to Know Before Packing Your Travel Bag!
One Day in Kyoto: How to See All the Famous Sights in the Most Efficient Manner
*This information is from the time of this article's publication.
*Prices and options mentioned are subject to change.
*Unless stated otherwise, all prices include tax.