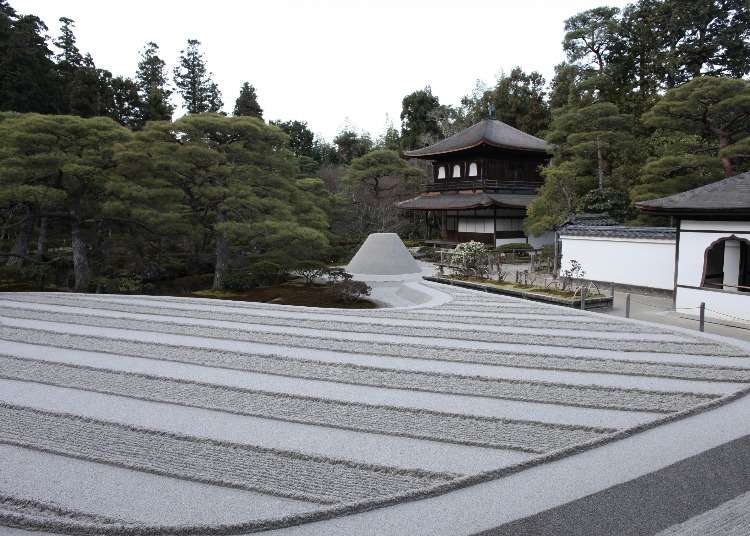 Ginkaku-ji Temple is known for the harmony of the white sand and lushly growing moss in its neatly manicured garden and the beauty created by the Zen temple's quiet and peaceful atmosphere.

It has also earned tremendous popularity among tourists as a place to enjoy the magnificent scenery in each of the different seasons, from the camellias and azaleas of spring and summer to the colorful leaves in autumn and snow-scape in winter.

Ginkaku-ji Temple is often mentioned in conjunction with Kinkaku-ji, similarly a sub-temple of Shokoku-ji Temple branch of Zen Buddhism. While unraveling the relevant history and culture, this article will highlight Ginkaku-ji Temple's most attractive features.

Ginkaku-ji Temple, standing at the base of Kyoto's eastern mountains 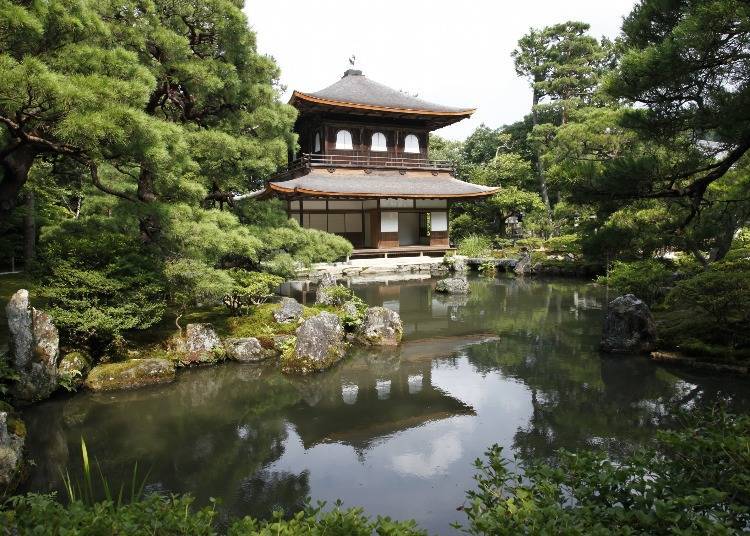 Ginkaku-ji's official name is Jisho-ji. The structure was originally built as the "Higashiyama-den" mountain villa for Ashikaga Yoshimasa, the 8th shogun during the Muromachi period.

After Yoshimasa's death, it was remade into a Buddhist temple. As soon as you walk down the Ginkaku-ji-kaku fenced path that leads through the main gate to the inner gate, you will see Kannon-den Hall, a national treasure and what could be called the symbol of Ginkaku-ji.

In the Edo period, in association with Rokuon-ji Temple's reliquary hall "Kinkaku" (meaning "golden pavilion"), Kannon-den came to be called "Ginkaku" ("silver pavilion"), after which Jisho-ji Temple also came to be called "Ginkaku-ji." In contrast to the eye-catching shiny golden exterior of Kinkaku-ji, Ginkaku-ji's construction has stately elegance, with an aura of the Japanese concept of "wabi-sabi."

There are several theories behind the reason that Ginkaku-ji does not match the silver "gin" of its name, including because of Yoshimasa's death during its construction or because it was never intended to be covered with silver foil from the beginning, but the true reason is not known.

Inside the temple, enshrined on the upper Cho-onkaku level, is a statue of the Bodhisattva Kannon and a Sentai-jizo statue in the lower Shinku-den Hall, but it is not usually open to public access.

Instead, enjoy a view of the temple's beautiful construction, following in the footsteps of Rokuon-ji Temple's Shari-den and Saiho-ji Temple (Koke-dera Temple)'s Ruri-den from the temple garden.

Togu-do Hall, Retaining its Appearance Since the Time of its Construction 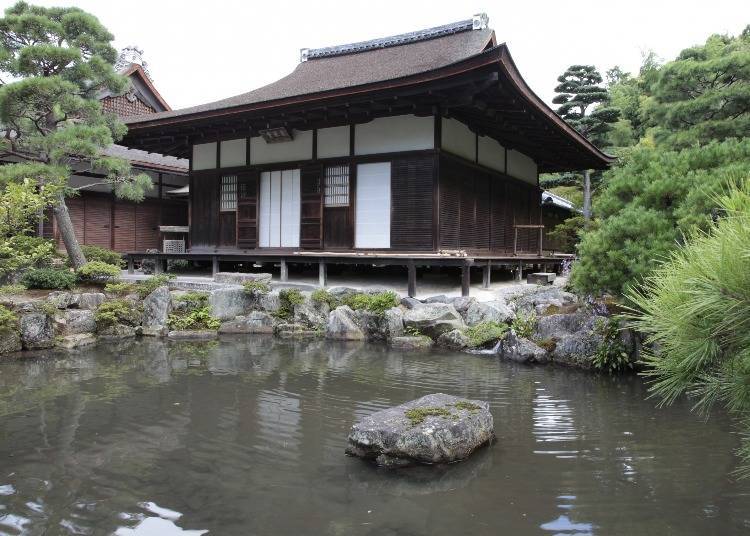 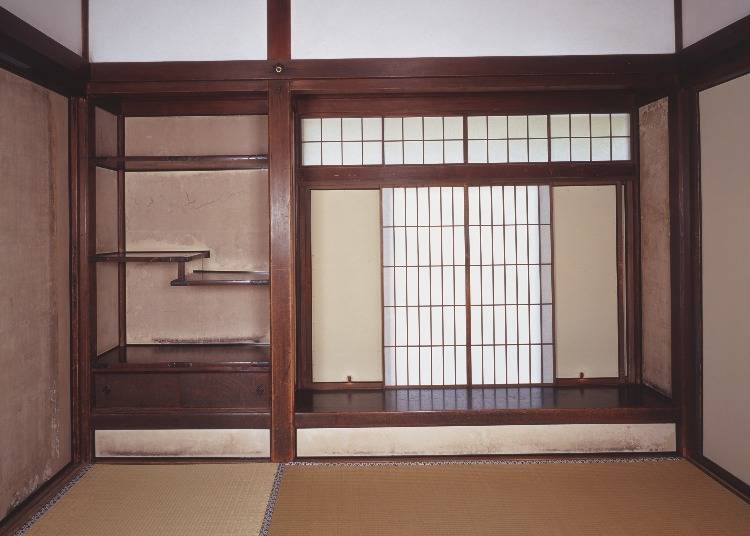 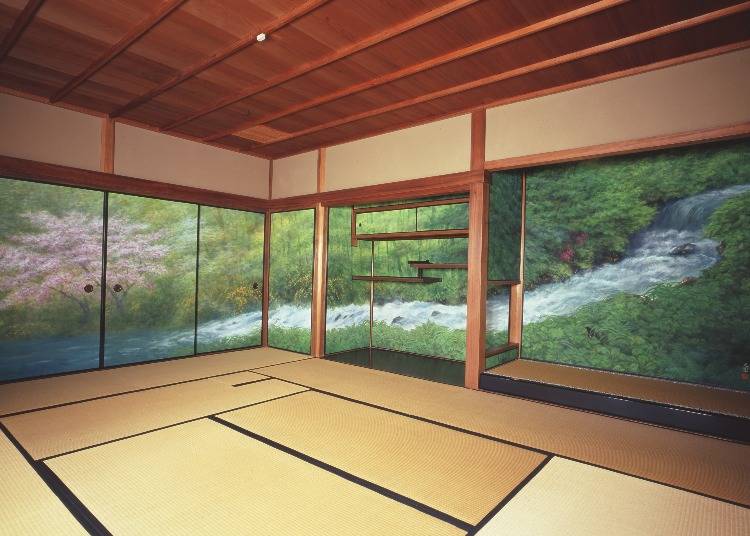 Along with Ginkaku (Kannon-den Hall), the national treasure Togu-do Hall also looks much the same as it did when originally built as the Higashiyama-den villa.

As the hall was constructed in 1486 as a place to enshrine a protective deity statue for shogun Yoshimasa, inside are statues of Amida Nyorai and Yoshimasa himself.

One of the rooms in the east Togu-do Hall is the Dojinsai, which is said to be the original model on which shoin-zukuri style tea rooms, with their alcove, shelves, built-in desk, and classic four-and-a-half tatami mats, are based.

Higashiyama culture prizes the wabi-sabi concept, "wabi" denoting an unadorned, quiet beauty and "sabi" expressing the character that comes with age, and those are the concepts out of which Yoshimasa's Higashiyama-den were born.

Today's Togu-do Hall is still deeply colored by those aspects of Higashiyama culture. The main hall (or Hojo) which enshrines Amida Nyorai was constructed in the middle of the Edo period.

Inside, it is decorated with fusuma screen door paintings done by Yosa Buson and Ike no Taiga, who were also active during the late 18th century.

Togu-do Hall, the main temple building, and Rosei-tei tea room's 1996 reconstruction are all generally closed to the public. Still, there are special openings in the spring and fall when you can view the interior, so timing your visit around those periods is recommended.

Take a Stroll Through Ginkaku-ji's Garden, Beautiful in Each Season 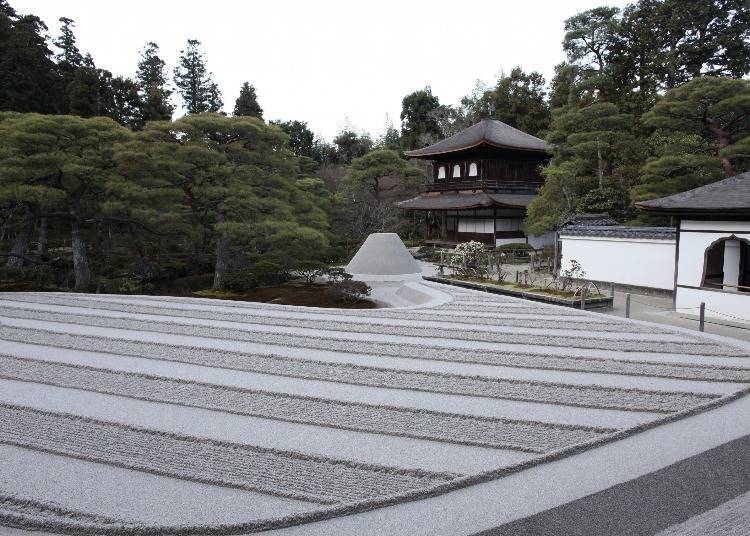 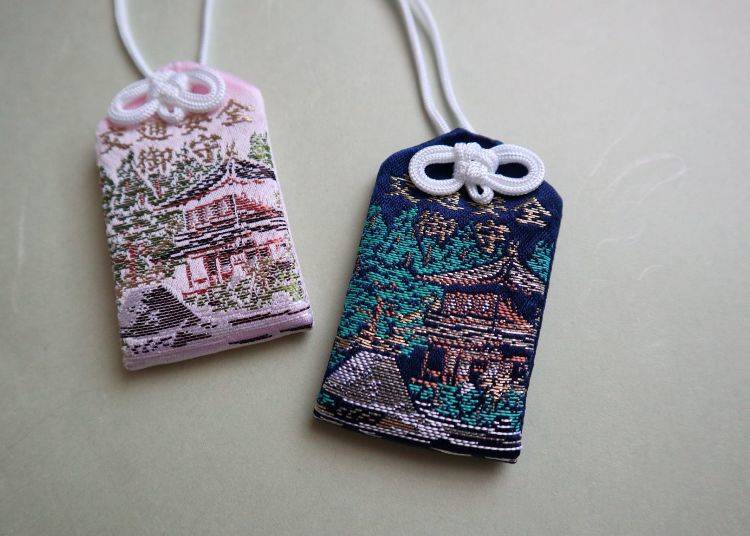 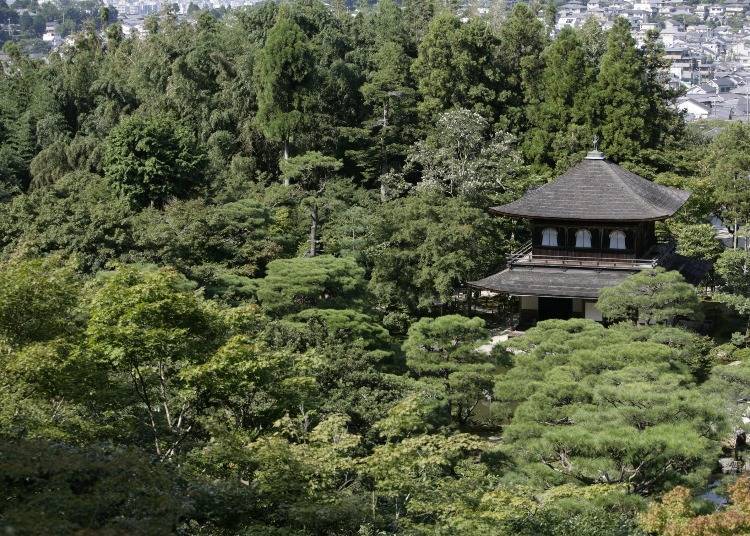 The Ginkaku-ji Temple grounds has a maintained garden, with a pond called Kinkyochi at its center, which is said to have been constructed in imitation of the garden at Saiho-ji Temple (Koke-dera Temple).

The garden's most eye-catching features are the Ginshadan and Kogetsudai. The Ginshadan (meaning "silver sea of sand") is made of Kitashirakawa's special white sand compacted and hardened into a stunning linear design.

The Kogetsudai is a mound of sand to the southwest of the Ginshadan, shaped into a Mt. Fuji-like form that is about 1.7 meters high and 3.2 meters wide at its base.

The particularly incredible view of Ginkakuji behind the Kogetsudai makes this a popular photography spot where practically every visitor is sure to stop and take a photo.

The omamori charms depicting images of the Ginkakuji and Kogetsudai are also popular with visitors. If you travel from the garden up the sloped path you can reach an observation deck, from which you can get a sweeping view of the entire temple area.

With seasonal flowers in bloom, the colorful leaves in the autumn, and the snowy scenery in winter, the garden is a beautiful sight at every time of year that you won't want to miss.

Nearby Places to Stop By When You Visit Ginkakuji Temple 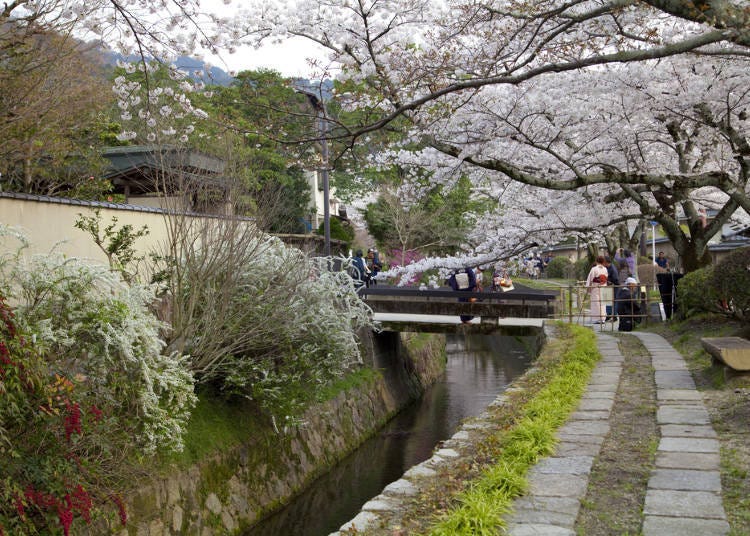 When you visit Ginkaku-ji Temple, you'll also definitely want to stop by the Lake Biwa Canal. The canal was built in order to bring water from Shiga Prefecture's Lake Biwa into the city of Kyoto.

Along its shores grow cherry and maple trees, and during the spring full-bloom, the cherry blossoms create a tunnel covering the canal. The way the petals begin to scatter on the water's surface is also a poetic sight.

In early summer, fireflies dart around the water's edge, and in autumn, the trees' leaves become brightly colored. Try walking along the Philosopher's Path following the canal and enjoying the seasonal scenery.

The temple road leading from Ginkaku-ji Temple's main gate to the Biwa Canal is lined with many shops selling various souvenirs. There are even restaurants and cafes, making a walk through the bustling temple town yet another enjoyable part of visiting the temple.

Kyoto: 5 Best Popular Sightseeing Spots to Visit Along with Nijo Castle
Guide to Recommended Highlights for Visitors to "Kiyomizu-dera", Kyoto's Most Prominent Sightseeing Location
Complete Guide to the World Heritage Site Shoguns Lived in: Kyoto Nijo Castle
1000 Statues of Kannon to Greet You, and Just a Short Walk from Kyoto Station - A Guide to the Best Features of Sanjusangen-do Temple
*This information is from the time of this article's publication.
*Prices and options mentioned are subject to change.
*Unless stated otherwise, all prices include tax.