HOME Shogatsu: How Japanese Ring in the New Year! 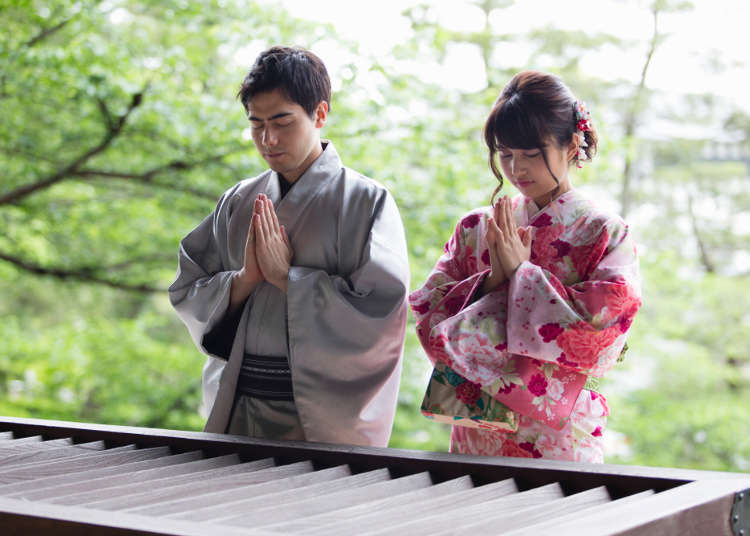 Shogatsu: How Japanese Ring in the New Year!

One of the most important holidays in Japan is Shogatsu (also called “Oshogatsu”), the celebration of the New Year that takes place over the course of the first few days of January.

It is one of the few times of the year that almost everyone has a holiday, and as such, many businesses are also closed. The reason for this is that Shogatsu is the time when it’s customary for families to gather.

Originally, the Japanese celebrated Shogatsu during the New Year based on the Chinese lunar calendar. This changed during the Meiji period in 1873, when Japan adopted the Gregorian calendar and they began officially celebrating the New Year accordingly, on January first. During Shogatsu, there are many traditions that continue to be celebrated to this very day.

Hatsumode: The First Shrine Visit of the Year 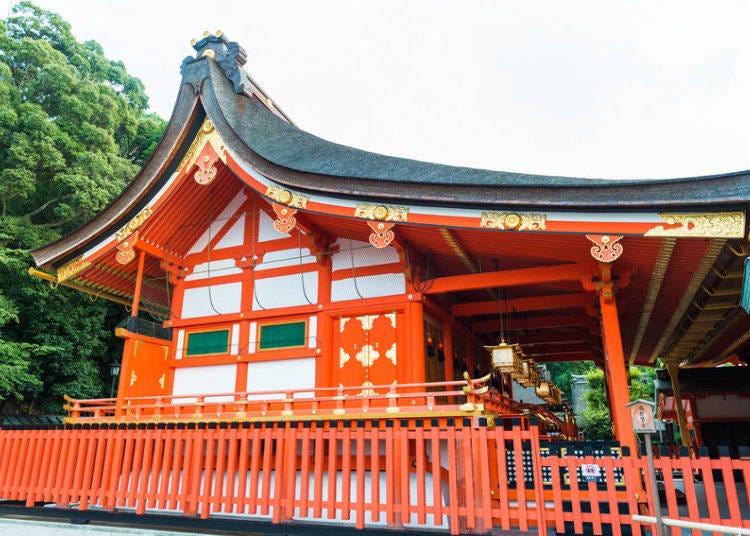 The first shrine visit of the New Year is so important, that the Japanese even have a special word for it: Hatsumode.

On the 31st of December, a few hours before the stroke of midnight, shrines begin to get extremely crowded. Not only shrines, but also Buddhist temples are popular. These usually welcome the New-Year by ringing a bell 108 times.

Hatsumode: Experiencing Your First Shrine Visit in the New Year 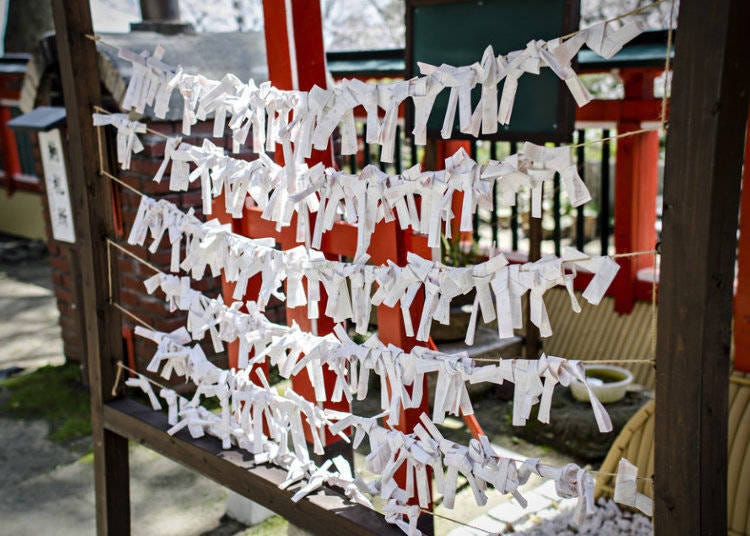 In addition to omamori, there are fortunes that can be purchased at the shrines or the temples. These fortunes are called omikuji. They come in the form of paper strips.

Traditionally, fortunes of good luck are kept, as they describe in detail the recipient’s luck in the coming year.

And if the fortune reads bad luck it can be tied to a tree branch at the shrine or temple so that any bad misfortune has been predicted can be left behind. 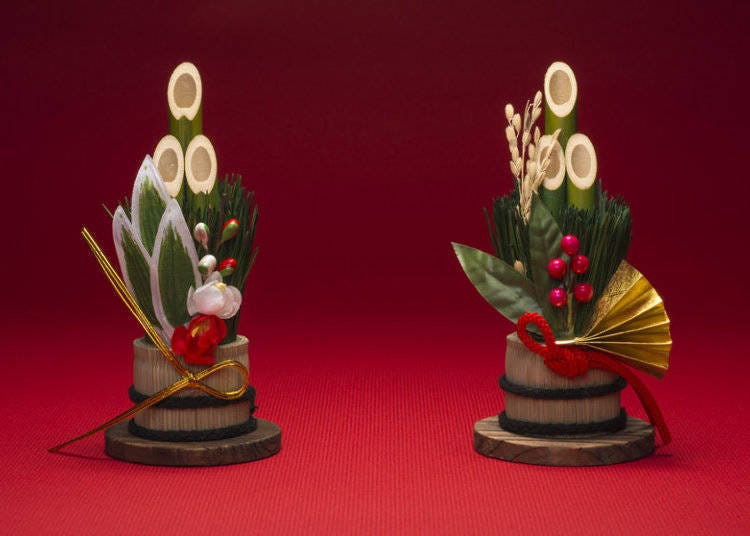 One of the most prominent symbols of shogatsu is the kadomatsu. This traditional New Year’s decoration is placed in front of homes to welcome the Shinto deities, known as “kami.”

Kadomatsu is typically made with sprigs of pine, bamboo and ume. Kadomatsu is usually displayed in pairs at either side of an entrance, representing the male and female entities. 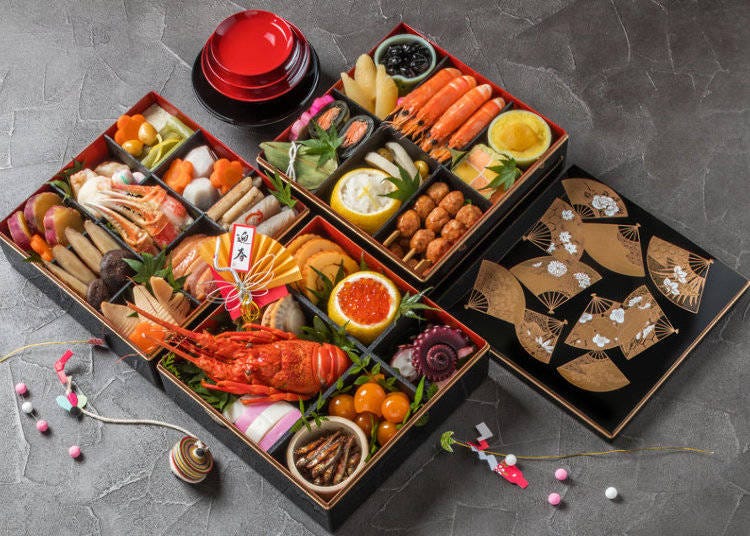 Osechi Ryori refers to a variety of exquisitely prepared traditional Japanese foods that are served in elegant boxes and shared among family members.

As with many celebrations, the food eaten during Shogatsu plays a significant role. The food prepared isn’t just delicious, each has a particular reason for being eaten.

Osechi may be homemade or purchased. Each of the foods in osechi holds auspicious symbolism, such as long life, wealth, happiness, and others. Some of the foods include sweet simmered black beans (kuromame), pureed sweet potato with candied chestnuts (kuri kinton), and many types of seafood. 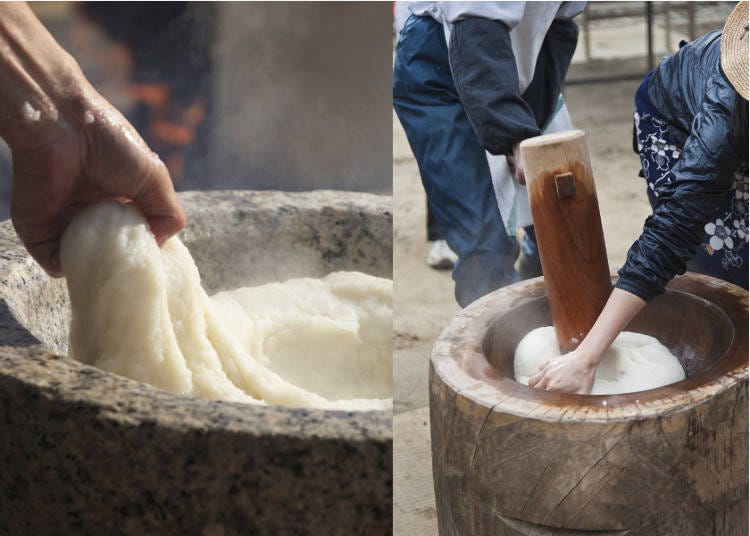 ・Mochi
The pounded, sticky rice cakes known as mochi are one of the starring foods of the Japanese New Year. During this time, it is customary for special mochi rice called “mochigome” to be pounded in a bucket by a large wooden mallet. To make the mochi dumplings, a tandem system is usually used. While one person pounds at the rice with a pestle, another adds water gradually.

The process is repeated until the mixture reaches a sticky consistency, after which it can be formed into dumplings to be grilled, or added to “zoni” (see below). 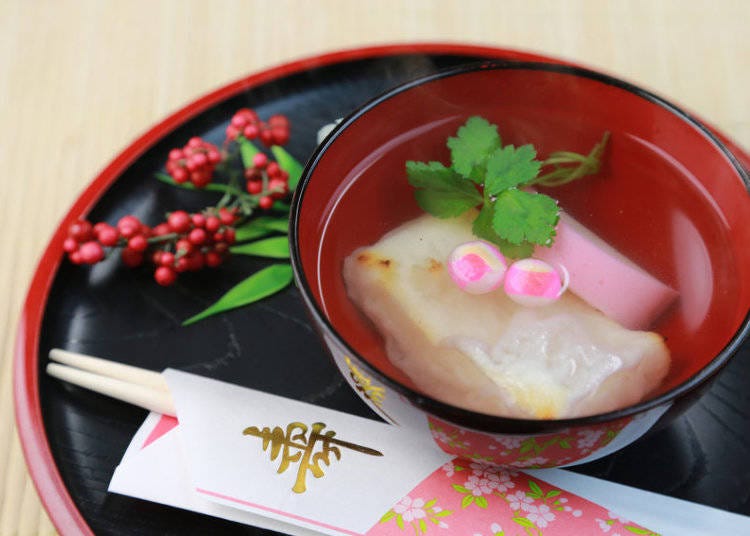 ・Zoni
Another traditional New Year’s food is zoni (also referred to as ozoni), a soup made with mochi and a stock of either dashi or miso, depending on the particular region. Meat, fish, leafy greens, and other vegetables may also be added. Although it was originally a samurai meal, it spread nationwide and even ordinary people began to eat it. 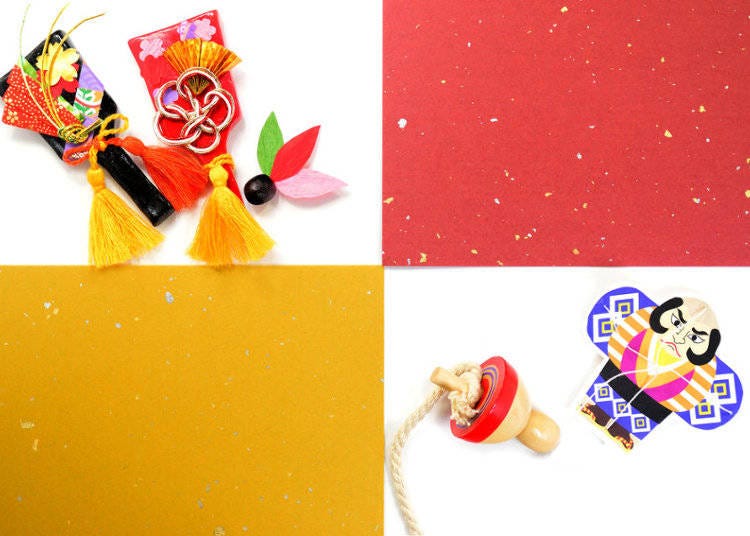 Shogatsu is also associated with activities for children, as well as for adults. These traditional activities are even practiced to this day.

・Games
Even in the cold, it is not uncommon to see children out and about around the New Year flying kites. This is known as “tako-age.” Playing “hanetsuki,” a traditional game similar to badminton is also very popular, as well as the old fashioned board game of “sugoroku” and the card game “karuta.” 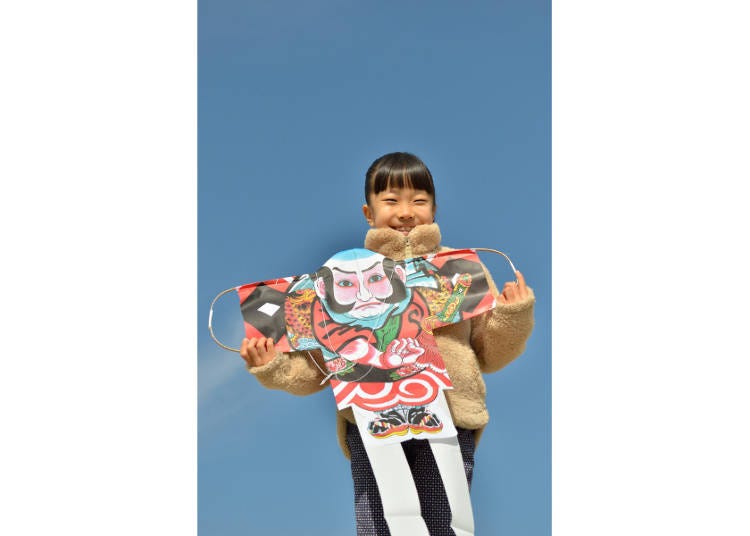 ・Nengajo
Much like the Western tradition of sending Christmas cards, the Japanese also send a seasonal greeting card, specifically, a postcard for the New Year’s holiday. Therefore, the middle of December to the three New Year national holidays is the busiest season for post offices in Japan. Cards often feature the year’s Chinese zodiac animal, other New Year’s motifs, or even popular characters. 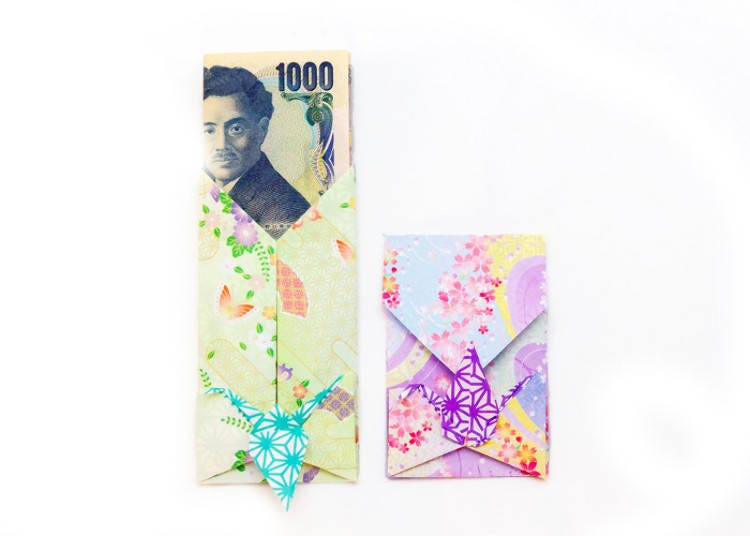 Children in Japan have one more reason to enjoy the New Year: a gift known as “otoshidama.” This unique custom is all about children receiving money in a special envelope called "pochi-bukuro" from their adult relatives.

Often adorned with the zodiac animal of the year, these envelopes can be simple, elegant, or cute and whimsical. Sometimes, you'll even find some of Japan's most iconic symbols on the otoshidama, such as the lucky cat, the daruma, or even popular characters from manga and anime. 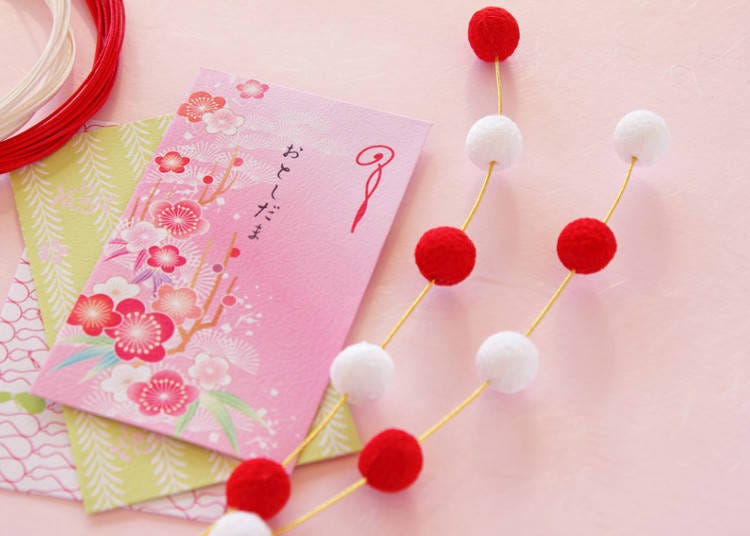 Sometimes, the amount of money a child receives can be rather large. In such cases, parents usually make their kid save a certain amount, while the rest can be spent on either inexpensive toys or even to fulfill a more expensive wish - in the end, this varies by family.

Whether the money is saved or spent straight away, though, every Japanese child will agree that otoshidama is one of the customs they look forward to the most among Japan's many New Year's traditions! 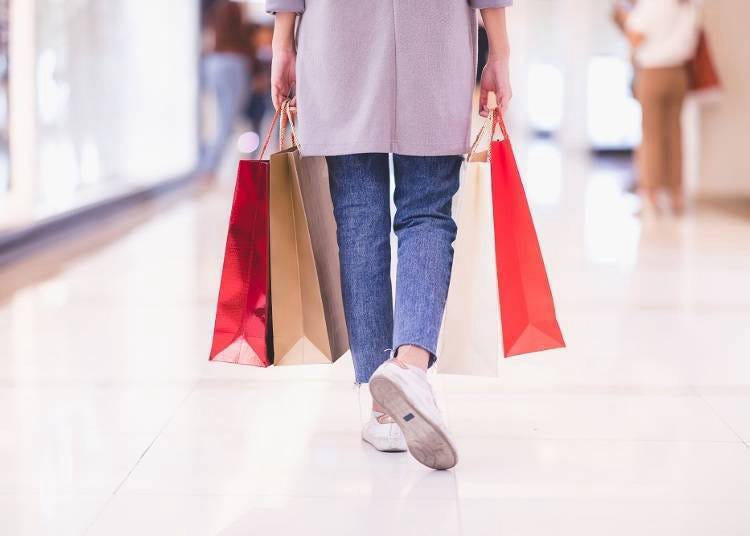 On New Year’s, stores attract more customers by putting a collection of items from the store into fukubukuro, sealed shopping bags that people can buy.

These "lucky bags" are usually placed at the entrance or the middle of the store, and advertise for themselves. The contents are valued more than what people will be paying for them. For example, a lucky bag could cost 2,000 yen but the value of the items inside are worth about 4,000 yen.

While lucky bags are a great way to save big, there's one other Japanese custom our shopping fans will love: 'Hatsu Uri', or the first sale of the New Year!

This is because prices are drastically reduced - with some stores offering up to 80% off. If you are looking to buy a high-priced, high-quality product that is usually hard to get, the first sale is a great opportunity. 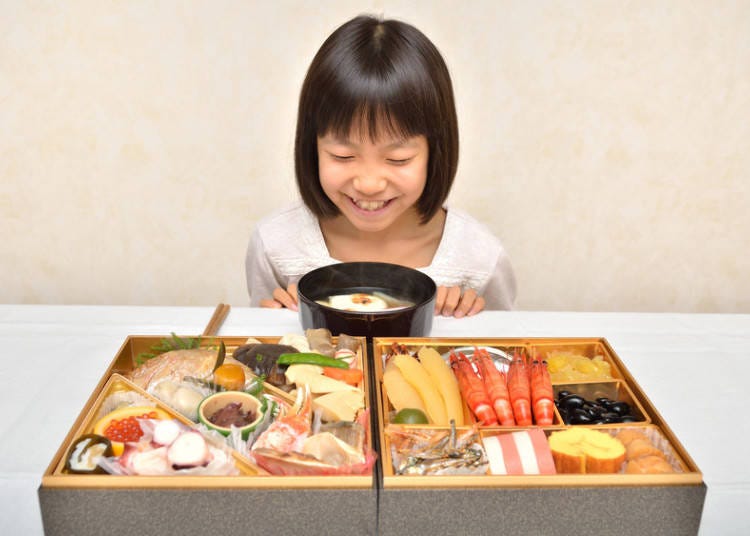 While each family has their own special way of celebrating the New Year, just about everyone in Japan can agree that Shogatsu is an important time for Japan and all who celebrate its unique customs.

All About Koshogatsu: Japan’s “Little New Year”
Cleansing with Fire: Spiritual Bonfires during Japanese New Year‬‬‬‬‬‬!
Winter Sightseeing: 7 Ways to Enjoy Tokyo in Winter
Shibuya New Year's Eve Countdown 2020: Counting Down at Tokyo's "Times Square"!
*This information is from the time of this article's publication.
*Prices and options mentioned are subject to change.
*Unless stated otherwise, all prices include tax.