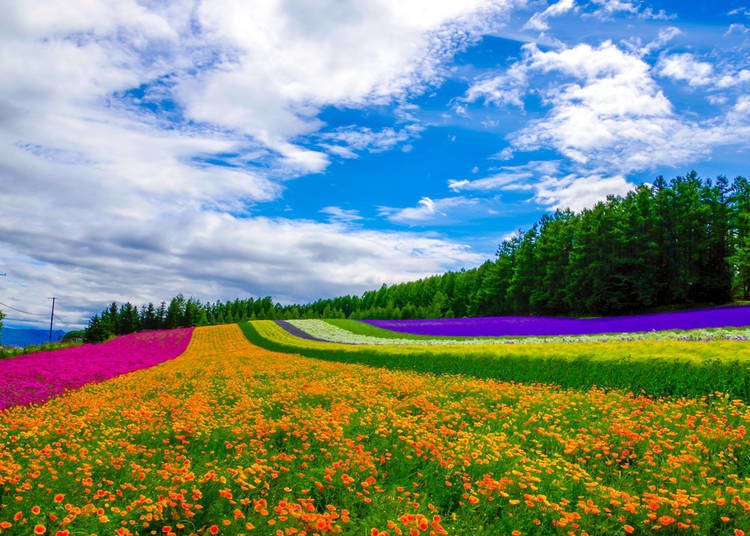 When is the Best Time to Visit Hokkaido? 5 Hokkaido Weather Tips That'll Help You Decide!

When is the best time to visit Hokkaido? You might think in spring or winter, but people tend to be surprised at how different Hokkaido's weather is, compared with Tokyo or Osaka.

Here, we'll share the best time to visit Hokkaido plus everything you need to know about Hokkaido's climate before you travel!

Where is Hokkaido and how do I get there? 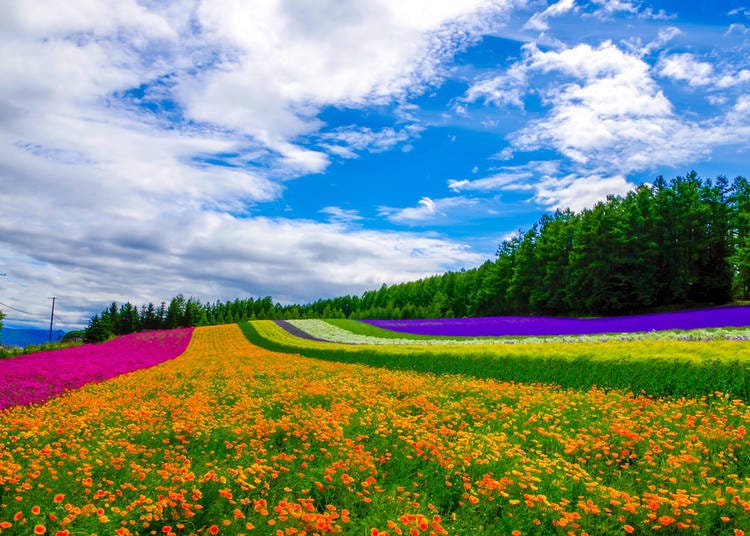 Hokkaido is the northernmost island of Japan. From Tokyo, Hokkaido's largest city, Sapporo, is about 820km.

By plane, it takes about 1.5 hours from Tokyo's Haneda Airport to Sapporo's New Chitose Airport.

By train, it’s about four hours on the Hokkaido Shinkansen from Tokyo Station to Shin-Hakodate-Hokuto Station. (This is covered under the Japan Rail Pass.)

1. Hokkaido is located on the same latitude as Italy, New York 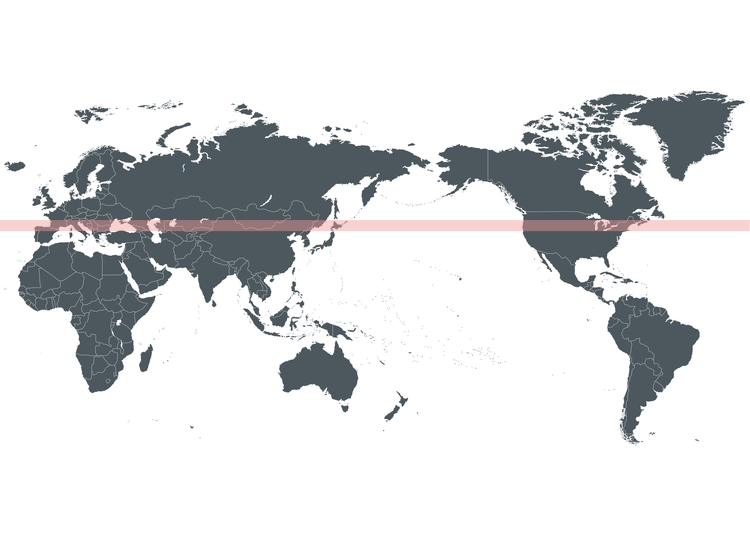 The Japanese archipelago extends a long way both north and south. Okinawa in the south has a subtropical climate, whereas the climate in Hokkaido in the north is subarctic.

Hokkaido is located at 41.21 degrees to 45.33 degrees latitude north. This places Hokkaido on the same latitude as Italy, southern France, northern Spain, and the Great Lakes of Canada.

Sapporo, the capital of Hokkaido, is located at 43.05 degrees latitude north and is on the same latitude as Vladivostok in Russia and Marseille in France.

Fall and winter in Hokkaido: The ultimate guide on what Hokkaido weather is like and the clothes you need 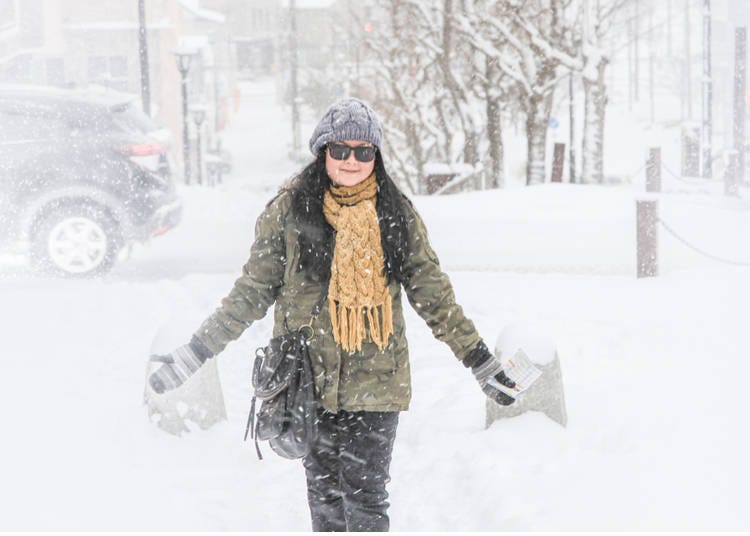 According to the Japan Meteorological Agency, the average annual temperature in Sapporo over the past 20 years (up to 2010) is 8.9℃. The average high temperature in the summer is 26.4℃, with average lows in winter of -7.0℃.

It’s relatively warm in Sapporo compared with some places in inland Hokkaido, but there’s a big difference if you compare it with Tokyo's annual average temperature of 15.4℃ and Okinawa's 23.1℃.

Spring and summer in Hokkaido: The ultimate guide to Hokkaido weather and the clothes you need!

3. The climate of Hokkaido is special, given the island's size! 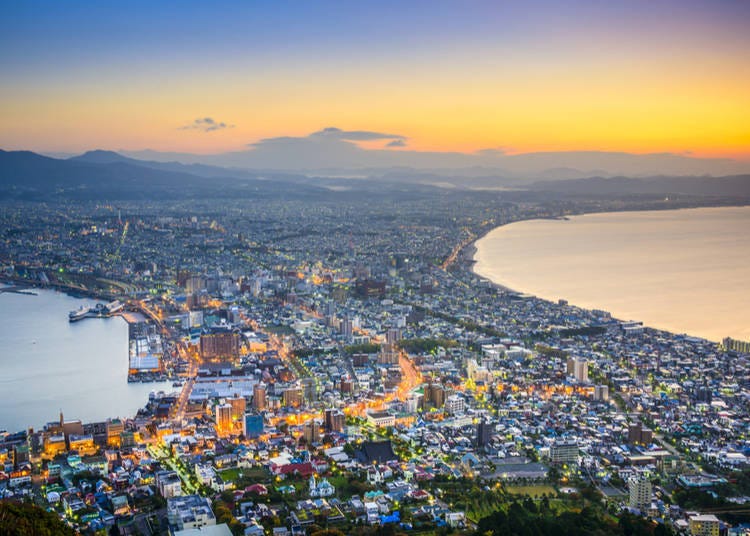 If you’re planning a trip to Hokkaido, remember that temperatures and periods of rainfall will vary depending on where you go!

With an area of 83,454 square kilometers, Hokkaido is roughly comparable to the US state of Maine. Hokkaido is bigger than Ireland - and close to twice the size of Switzerland.

Hokkaido is surrounded by the Sea of Japan, the Sea of Okhotsk, and the Pacific Ocean. Each region of the island has its own climate characteristics.

Below we share a climate graph for cities on the Sea of Japan coast, the Pacific Ocean coast and the Sea of Okhotsk coast, and in the inland as well (Asahikawa), as published by the Meteorological Agency and the Asahikawa Regional Meteorological Office. (Average values 1981-2010.) 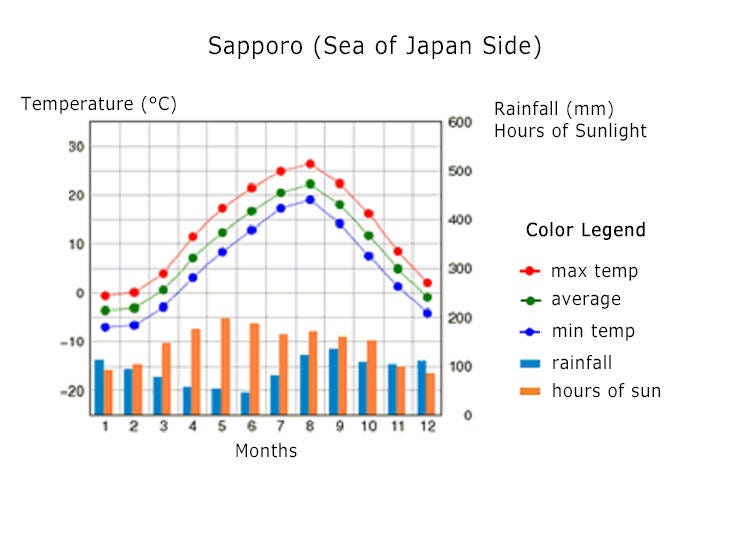 ◆ Sapporo (Sea of Japan side): Temperature, average hours of precipitation/sunshine are shown in the graph above

Major cities on the Sea of Japan side: Sapporo, Hakodate
The average annual temperature in Sapporo is 8.9℃, which is 2-3℃ higher than other inland areas in Hokkaido. There’s a lot of snow in winter, making it an attractive area to visit for skiers, snowboarders, and winter sport enthusiasts. 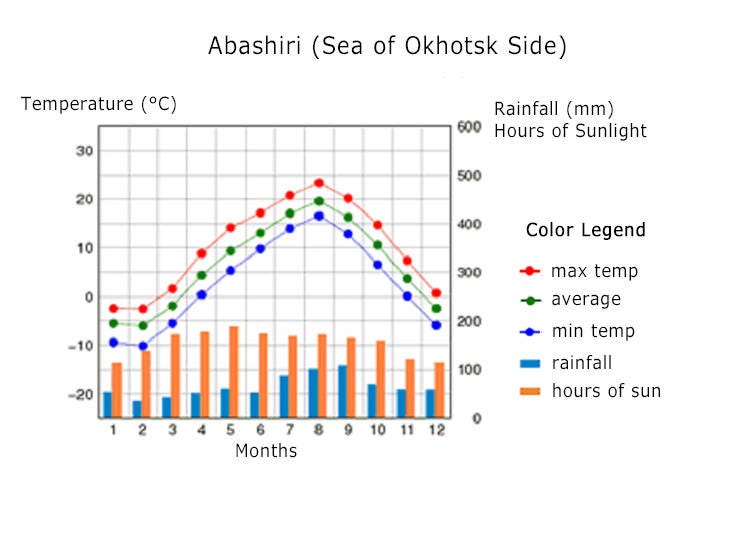 ◆ Abashiri (Sea of Okhotsk side): Temperature, average hours of precipitation/sunshine are shown in the graph above

Main cities on the Sea of Okhotsk side: Abashiri, Wakkanai
The average annual temperature is 6.5°C in Abashiri. Blizzards tend to be quite rare in winter. 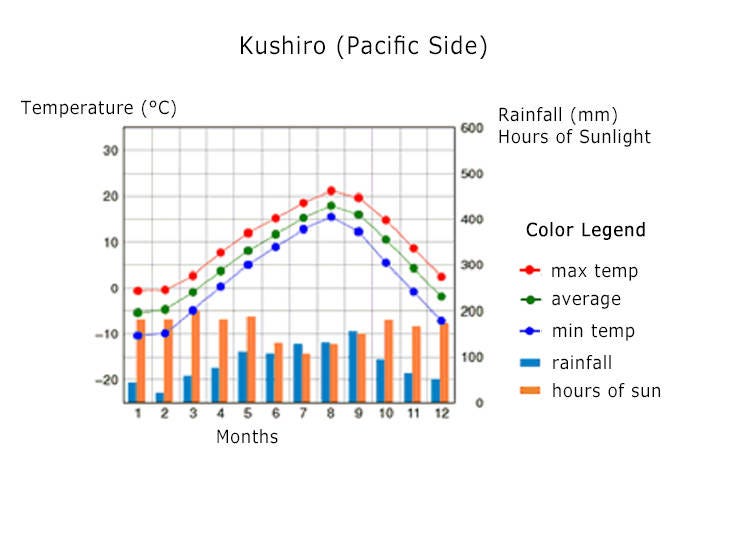 ◆ Kushiro (Pacific Ocean side): Temperature, average hours of precipitation/sunshine are shown in the graph above

Main cities on the Pacific Ocean side: Kushiro, Nemuro, Shiretoko
The average temperature is 6.2℃ in Kushiro. This area tends to have only a few days of sunny weather in summer and many sunny days in winter. 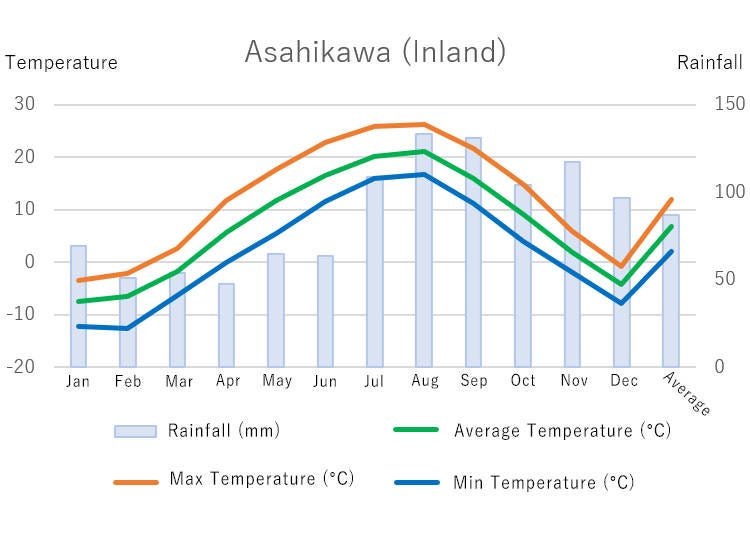 ◆Asahikawa (Inland): Temperature, average hours of precipitation/sunshine are shown in the graph above

Main inland cities: Asahikawa, Biei, Furano
The average annual temperature is 6.9℃ in Asahikawa. It has the lowest average temperatures in winter in inland Hokkaido

Hokkaido has limited rainfall compared to Tokyo (1528mm a year on average), and a cool climate in summer.

However, while not considered "rainy season" per se, there does tend to be a lot of rain in August and September.

High pressure areas in the Pacific Ocean and the Sea of Okhotsk mean that some years have concentrated torrential rainfalls. Kushiro on Hokkaido’s Pacific Ocean coast tend to have only a few days of sunny weather in summer and plenty of sunshine in winter.

5. Hokkaido has incredible festivals throughout the year! 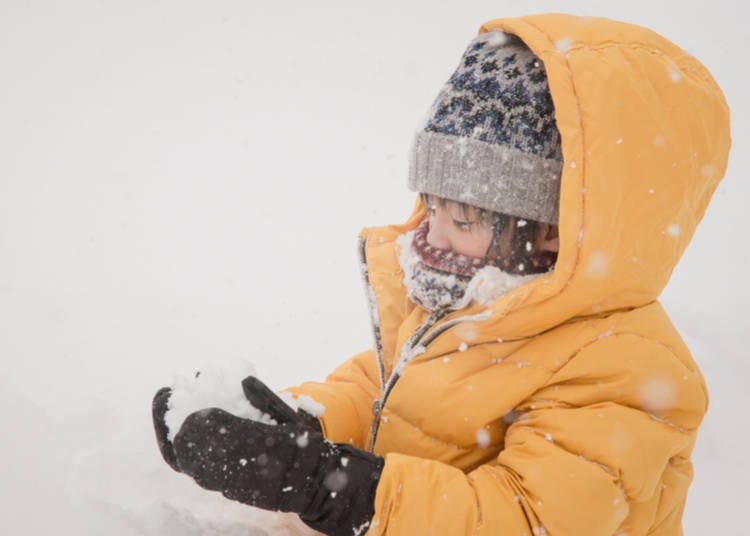 When deciding on the best time to visit Hokkaido, consider what else you can do at the same time. Whether it's in winter to double up on skiing, dipping in Niseko onsen hot springs and seeing the Sapporo Snow Festival, or feeling the intense drum beats and atmosphere of the Kotohira Shrine Festival in summer, each season has something in store for you!

・Sapporo Yuki Matsuri (Snow Festival)
Dates: Early February
Held at several venues in Sapporo every year, such as Odori Park, in early February. You’ll see all sorts of snow statues and ice sculptures on display. Many tourists - close to 2 million - come to visit every year, it’s an event that’s unique to Hokkaido. There are also plenty of other unique events and activities that take place when there’s snow around, such as lighting snow candles.

・Asahikawa Winter Festival
Held: Early February each year
Located in the northern part of Hokkaido, the city of Asahikawa draws crowds of visitors each year to its huge Winter Festival. The expansive festival grounds are decorated with giant snow and ice sculptures which are lit up at night.

・Akkeshi Sakura and Oyster Festival
Held: Early May each year
Located in the eastern part of Hokkaido, the town of Akkeshi is known both for oysters and its beautiful cherry blossoms. When oyster season opens in May, locals hold this festival, inviting all to grill the shellfish under the blooming sakura and celebrate the moment.

・Kotohira Shrine Festival
Held: August 9–11 each year
One of Hokkaido's three major festivals, this dazzling parade of colors is held every year at Kotohira Shrine in Nemuro. The parade features a huge 2-ton portable shrine called a mikoshi, plus a series of floats and drummers. It's a lively event that you're sure to love.

・Ubagami Shrine Festival
Held: Around August 9–11 each year
With over 370 years of history, Ubagami Daijingu Shrine in the port town of Esashi is considered to be Hokkaido's oldest shrine. As one of Hokkaido's major festivals, drawing around 58,000 people, this energetic celebration features a parade of huge mikoshi and giant floats.

・Yotaka Andon Festival
Held: Fourth Friday and Saturday in August each year
Another of Hokkaido's three grandest festivals, the Yotaka Andon Festival is a festival of light held at the end of August. Paper lanterns of all sizes, from small to a 5-ton behemoth, are paraded around the town of Numata. At the festival's climax, teams leading the huge lanterns collide and 'fight' with each other, making for a spectacular show.

・Nemuro Sanma Festival
Held: Fourth Saturday and Sunday of September each year
In the port city of Nemuro, the catch of sanma, or Pacific saury, is a major business, and the city brings in the most of this particular fish in Japan. The Nemuro Sanma Festival is all about celebrating this particular fish, which are grilled up fresh and enjoyed. At night, the entire area is lit by the lights of fishing boats, making for an impressive scene.

When is the best time to visit Hokkaido?

Summer and winter are largely considered the best times to visit Hokkaido.

Hokkaido is largely a destination for people who've visited other areas and who are looking to sample experiences that can only be found in Hokkaido, such as winter sports, regional cuisine and so on.

We have shared much about the climate of Hokkaido to help you gain insight into when it's most comfortable to travel, as to when is the "best" time largely depends on what you wish to do and see.

While Hokkaido's winter is cold, it's the perfect time to get outside and enjoy activities like skiing and snowboarding, take in the sights at a snow festival, or have a dip in a hot onsen bath.

Likewise, spring and summer are beautiful seasons filled with flowering fields; they're perfect times to enjoy a pint of beer, soft-serve ice cream, or taking in sights around Sapporo, Biei and beyond.

And the colorful hues of autumn foliage, together with the comfortable temperatures, make it a brilliant season for traveling around Hokkaido.

Whatever season you decide on visiting, we hope you'll love your Hokkaido adventure!

Book an unforgettable experience in Hokkaido!

Search for other hotels in Hokkaido
*This information is from the time of this article's publication.
*Prices and options mentioned are subject to change.
*Unless stated otherwise, all prices include tax.