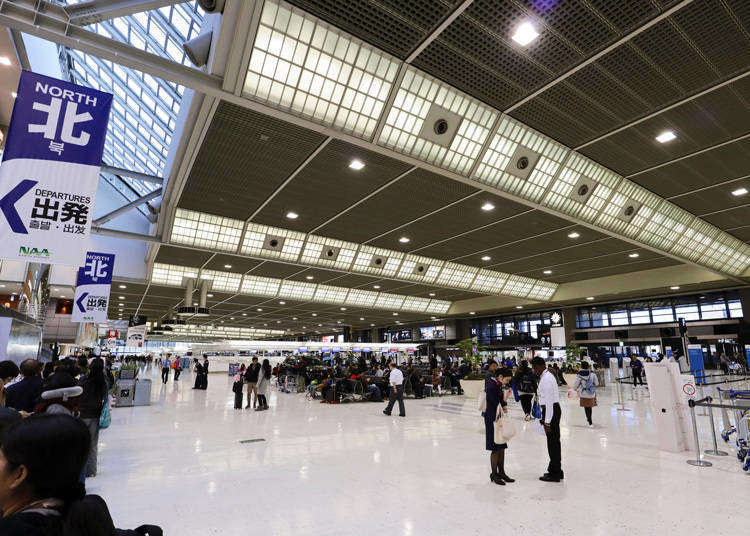 Bus, Train, or Taxi? Best Ways to Get From Narita Airport to Tokyo Station!

"How do I get from Narita Airport to Tokyo Station?" Many travelers to Japan have asked themselves this at least once or twice when planning for their trip. Tokyo Station is a travel hub in the center of an intricate web of rail routes that can be daunting for visitors to figure out on their first trip to the metropolis.

To help travelers along, we'll be listing out some pros and cons of traveling from Narita Airport to Tokyo Station via train, bus, or taxi in this article. Compare these available routes and see which one can best be worked into your itinerary! 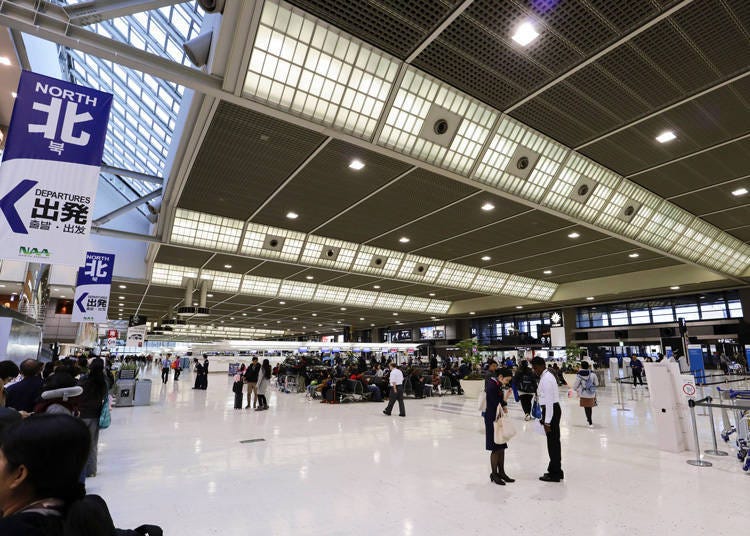 Narita International Airport (more commonly known as just Narita Airport) is the largest airport in Japan. It has three terminals serving domestic and international flights, and there are plenty of convenient facilities like shops and restaurants in the airport as well. As fun as Tokyo may be, you could definitely spend an entire day shopping at the airport if you liked!

Telecom booths offer portable Wi-Fi rental services at the airport, so you'll never need to worry about being disconnected. Get a Wi-Fi rental discount coupon from this link here if you're not sure where to start!

Another thing you can consider doing before setting off for Tokyo is a cycling tour around the airport, which is surrounded by beautiful fields and landscapes beyond its buildings. The tour will bring you around scenic sights like famous rivers and cycling roads. 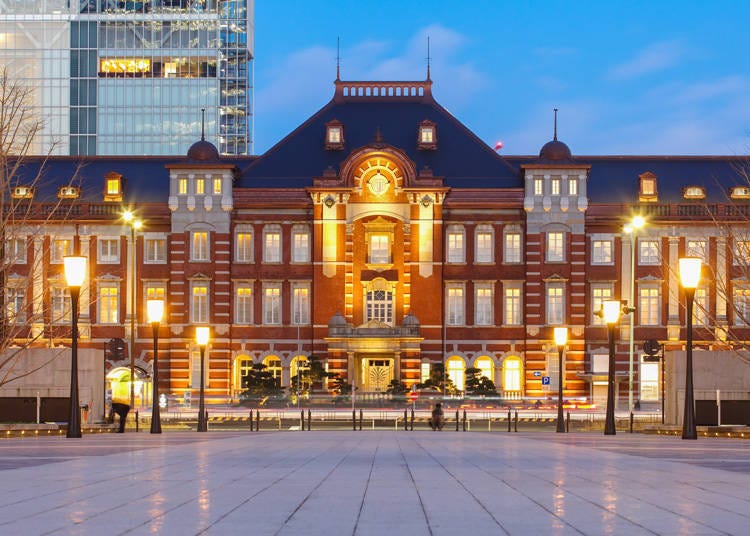 Known as the gateway to Japan, Tokyo Station is a trendy place, particularly among tourists. It is conveniently located near the Imperial Palace and countless other sightseeing hotspots that you won't want to miss.

Right in the station itself is the JR East Japan Traveler Service Center, which provides several essential services for foreign visitors coming directly from the airport, such as baggage storage and currency exchange. There are four such centers located just outside the Marunouchi North Exit ticket gates.

Getting to Tokyo Station from Narita Airport 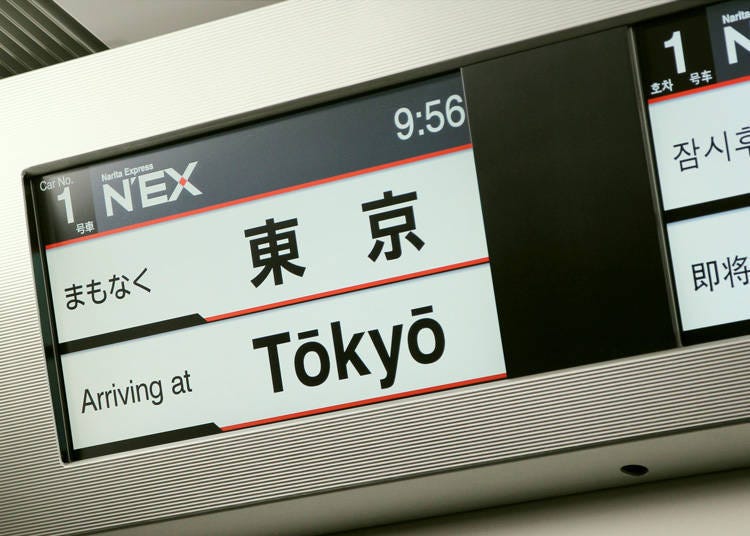 The main transport most tourists use to get to Tokyo Station from Narita Airport is train or bus. And since Tokyo sits on top of a complex network of rail routes, there are several ways you get there by train should that be your chosen method.

The first option many travelers will come across is the Narita Express. This paid express train (covered under the Japan Rail Pass) stops at a number of main stations within the Tokyo metropolitan area for maximum convenience, and the time taken between stops is relatively short as well. Some of the stations along its route are Tokyo, Shinagawa, Shibuya, Shinjuku, Ikebukuro, Yokohama, and Omiya.

Keisei Electric Railway also offers a reserved seating paid express train service called the Keisei Skyliner. This train takes visitors from Narita Airport to the Ueno area. You'll need to change to a conventional train after that to get to Tokyo Station.

If you're adventurous enough, you can totally get to Tokyo Station from Narita Airport just by conventional trains alone! Since these are regular commuter trains, the time taken to get to Tokyo will be longer, but you'll shave off a lot of cost from your travel budget for sure - especially if you don’t activate your Japan Rail Pass straight away.

Finally, you can also consider taking the Airport Bus, which sets off from Narita Airport and takes you directly to Tokyo Station without the hassle of changing trains and such. Definitely something to consider if convenience is your top priority!

In review, here are a few methods you can use to get to Tokyo Station from Narita Airport:
1) Narita Express
2) Keisei Skyliner + conventional train
3) Conventional trains only
4) Airport Bus

Time and cost considerations when taking a train, bus, or taxi

In the following section, we'll take a closer look at the time and cost needed for the various transport options. 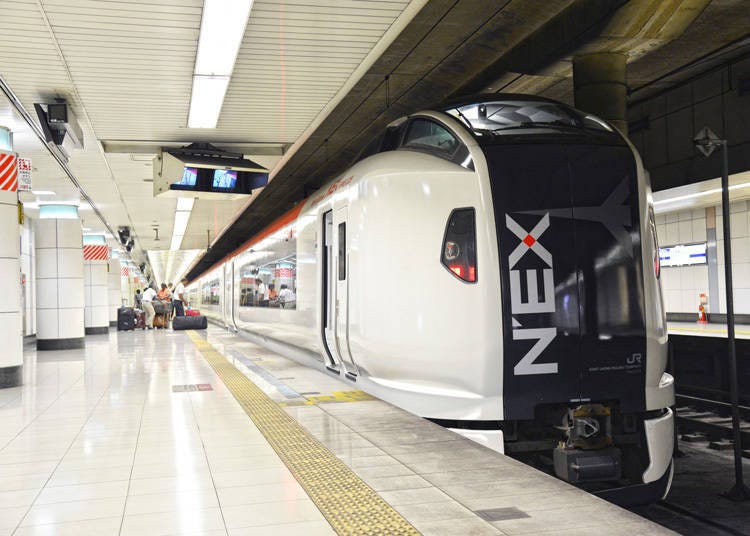 The Narita Express takes passengers directly from Narita Airport to Tokyo Station. Besides the sheer convenience, there are four other main advantages to this train service:
1) Reclining seats
2) Seats with table and power outlet
3) Video billboard showing information in Japanese, English, Mandarin Chinese, and Korean
4) Trip takes about 1 hour

The single disadvantage this service has is its high price. A ticket for the standard carriages cost 3,070 yen (tax included), whereas the premium green car (first class) carriages would cost 4,640 yen (tax included). (Again, the Narita Express is covered under the Japan Rail Pass.)

While the price may seem prohibitive at first, especially if you're traveling in a large family group, this is really the best method if you're looking to get to Tokyo Station as quickly as possible and in the most comfortable way. Another plus point is that there's no need to transfer to other trains. 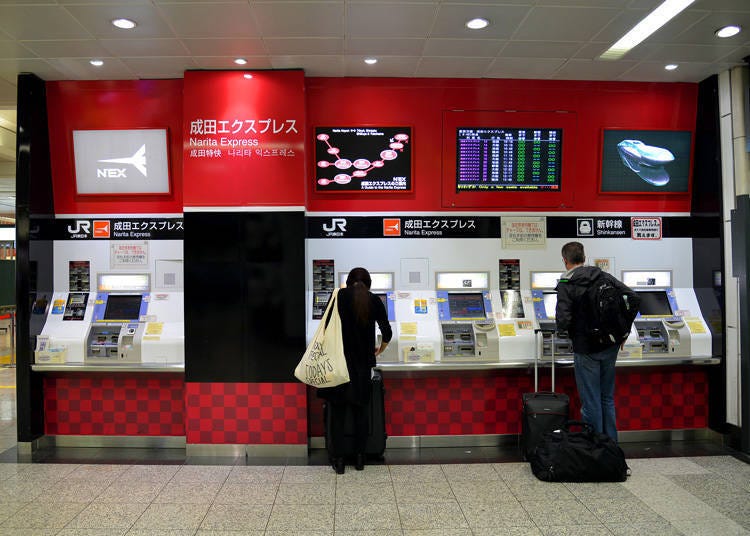 Tickets for Narita Express can be bought online, at the ticketing counters, or at travel agencies. 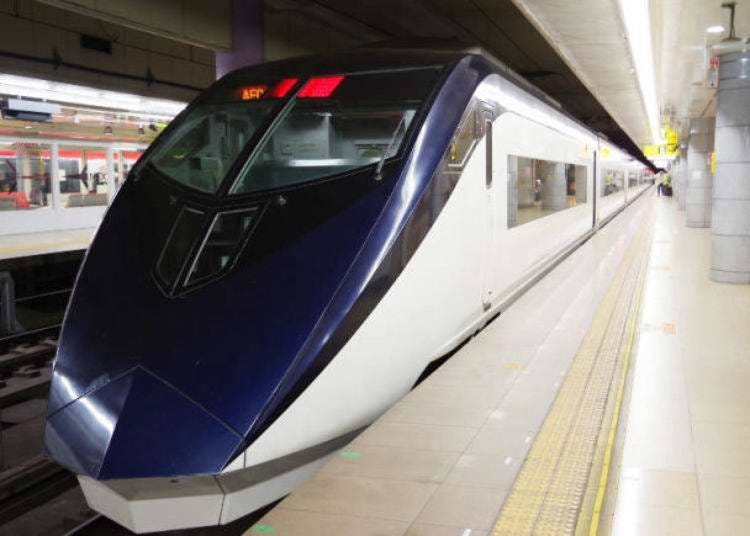 A cheaper alternative to the Narita Express is the Keisei Skyliner, an express train that can also be used to go to Tokyo Station with a quick transfer to a conventional train in between.

Here is the basic route you'll be taking:
Narita Airport Station on the Keisei Electric Railway → (Board the Keisei Skyliner) → Nippori Station on the JR Lines → (Transfer to a train on the Yamanote Line) → Tokyo Station

After boarding the Keisei Skyliner, disembark at Nippori Station and transfer over to a train on the JR Yamanote Line before continuing to your final destination, Tokyo Station. The advantages to this method are:
1) Relatively short traveling time
2) Cheaper than Narita Express

Even with a transfer in between, it takes about an hour or so to get to Tokyo Station using the Keisei Skyliner + conventional train combination, which is about the same amount of time as the Narita Express. Price-wise, the entire trip will cost you about 2,680 yen (tax included), making it an attractive alternative for those looking to save as much cost on transport as possible while still keeping the trip duration short.

There are disadvantages as well, of course. The main one would be the need to transfer trains. The Narita Express takes you directly to Tokyo Station, but you'll need to put in a bit more effort to get there on the Keisei Skyliner.

Japan's train transfer system is notoriously complicated - even local Japanese residents are confounded by it on occasion. The Yamanote Line is a busy track that has trains rolling into the station every few minutes, so even if you missed a train or two, it wouldn't delay your trip duration by too long.

You may wish to avoid rush hour (around 7:30 a.m. to 9 a.m., and 4:30 p.m. to 6:30 p.m.), especially if you have a lot of luggage or larger suitcases, as you might find the train to be a bit of a squeeze. If you're a complete newcomer to Tokyo, the Narita Express will most definitely be a much easier and hassle-free way to get to your destination.

Tickets for the Keisei Skyliner can be reserved or bought online and over a number of ticket counters. Reservations can also be made over the phone. The online website is available in English as well, making it easier for international visitors to simply order their tickets on the internet.

Narita Airport to Tokyo Station by conventional trains only 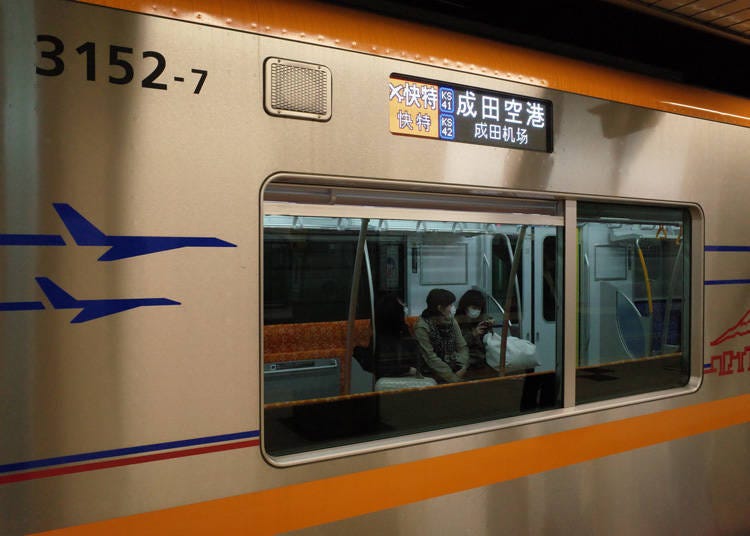 For the adventurous, try getting to Tokyo Station from the airport by conventional trains alone! The best advantage this method has over all the others is that it will help you keep transport costs at an absolute minimum.

Although this method makes the travel time go up to about 1.5 hours, it offers major cost savings in ticket prices. Frequent travelers or visitors who are familiar with Japan's train transfer system may prefer to opt for this method. 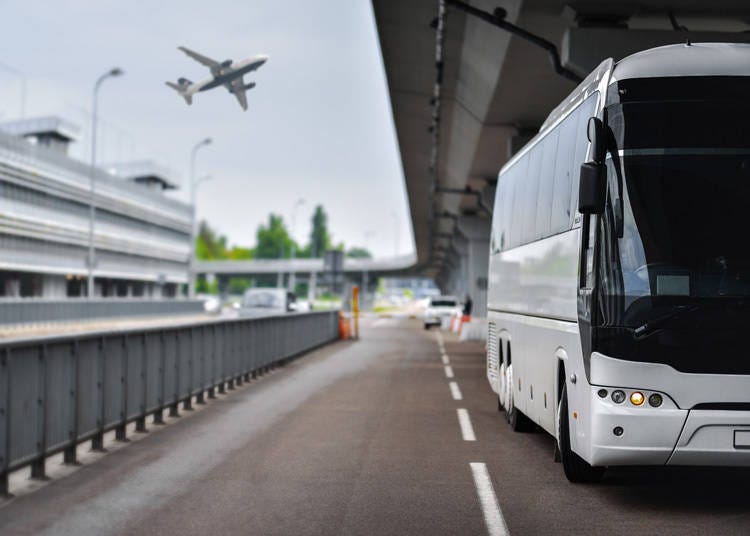 You can also take a bus from the airport to Tokyo Station, which offers a few advantages as well:
1) No need to transfer vehicles
2) No rushing
3) Also brings passengers directly to a number of hotels within the vicinity of Tokyo Station

As for disadvantages:
1) May not be able to arrive at a destination exactly on time

Japanese trains are famous for their punctuality, but buses are under the mercy of traffic and weather conditions. Therefore, if you do decide to take a bus instead of the other options, be sure to plan a lot of leeway into your schedule so that what should have been a relaxing ride doesn't end up developing into a stressful situation.

It usually takes about 90 minutes for the bus to go from Narita Airport to Tokyo Station, and the fare will be 2,800 yen (tax included) if you're dropping off at the Yaechika Exit, or 3,200 yen if you're going all the way to Marunouchi Exit.

Reservations can be made online or via phone. You can also visit this ticketing website to book your tickets at a discounted price!

As a side point, we'd just like to note that there's also a bus going directly from Narita Airport to Maihama Station (Tokyo Disney Resort). Since it's quite accessible from the airport, we do highly recommend going for a bit of sightseeing around the Maihama area as well, if time permits!

Taxi from Narita Airport to Tokyo Station - how long and how much? 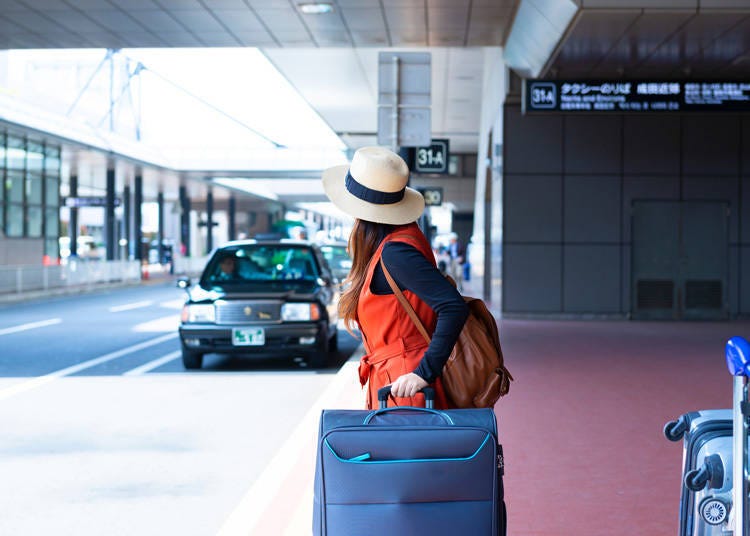 Yet another option to consider is taking a taxi to town, but this is going to cost you a hefty chunk of change! Even if you manage to get on a flat rate taxi, the fee is usually fixed at 20,000 yen (tax included), and that is in addition to the extra toll charges you will incur for using highways. The taxi will take about an hour to reach Tokyo Station, and they can be reserved over the phone.

As a recap, here's a brief summary of all the available routes from Narita Airport to Tokyo Station that we've covered in this article. All prices in this chart are inclusive of tax.

Pick the method that suits you best!

With so many ways to get to Tokyo Station from Narita Airport, visitors who are new to Japan may find it challenging to choose the right one for them, even after much research. We hope this comprehensive list of pros and cons of each method can put you on the right track and allow you to spend more time enjoying your trip instead of mulling over transport options!