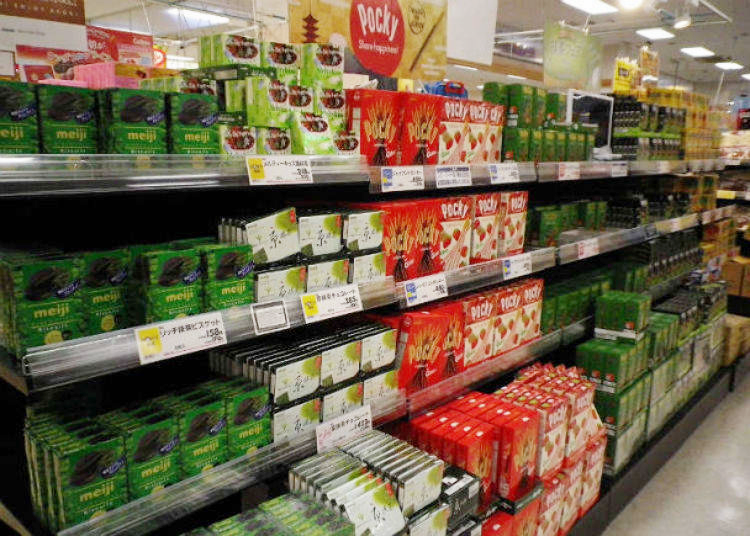 What to do when your connecting flight at Narita Airport is a few hours away? Narita Airport isn't just the gateway to Japan, it's a hub for international flights in Asia as well. But you needn't stay at the airport while you're waiting for your next flight! In fact, there are a lot of recommended tourist spots that you can visit during a layover at Tokyo Narita Airport.

So, if you have 2 or 3 hours free there might also be some places you will make time to visit from this list of 10 tourist spots.

*Before you leave Narita Airport on a layover, be sure to check whether you need a valid visa for Japan. 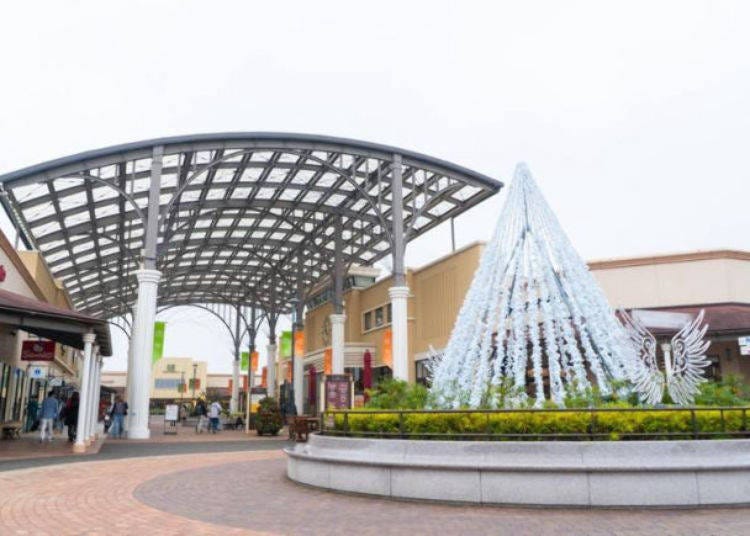 Shisui Premium Outlets is an outlet mall, which opened in 2013 in Chiba prefecture Inba-gun, Shisui Iizumi. It is a 15-minute highway bus ride away, so makes a perfect spot to visit on a layover at Narita Airport. Many foreigners visiting Japan go there so it has an international feel. 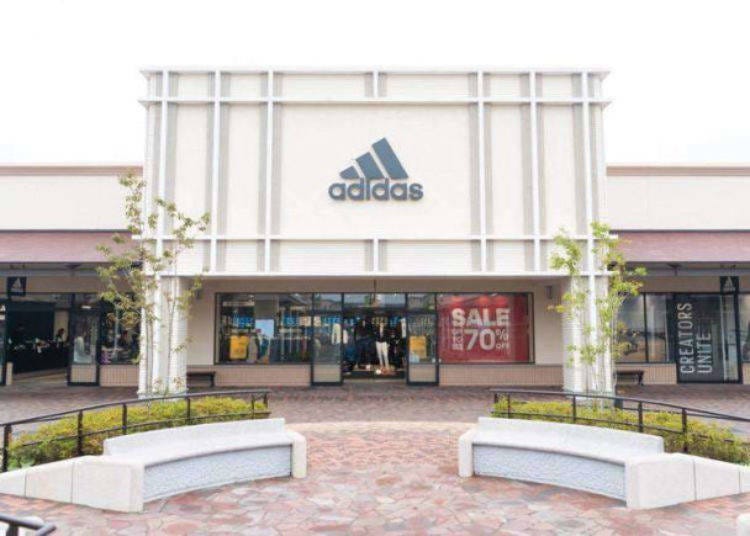 High-end fashion, sports brands, various accessories, watches, miscellaneous goods can be bought at bargain prices. There are many services geared towards foreigners so it’s a good spot to have fun shopping. 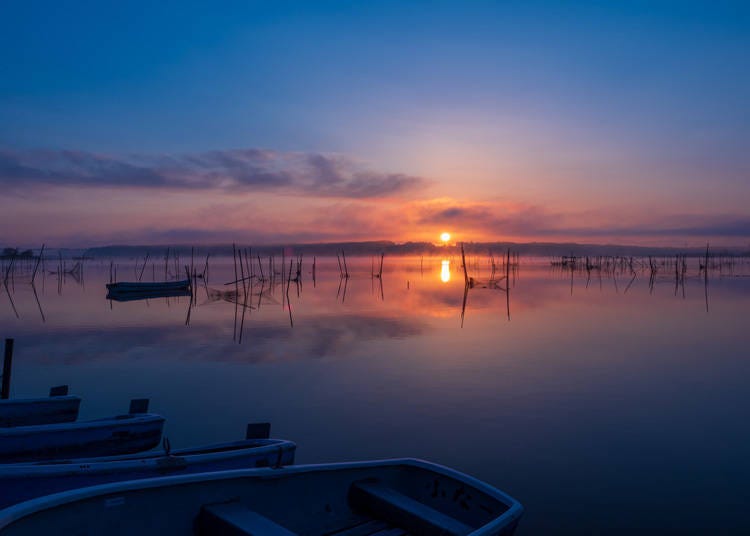 In the northwest of Chiba Prefecture, Lake Inba-numa is split between North Inbanuma and West Inbanuma like a valley by the Inba Discharge Channel. With a free walking map of Inbanuma Satoyama in hand, you can walk around the foothills surrounding the lake and forget the hustle and bustle of the city. 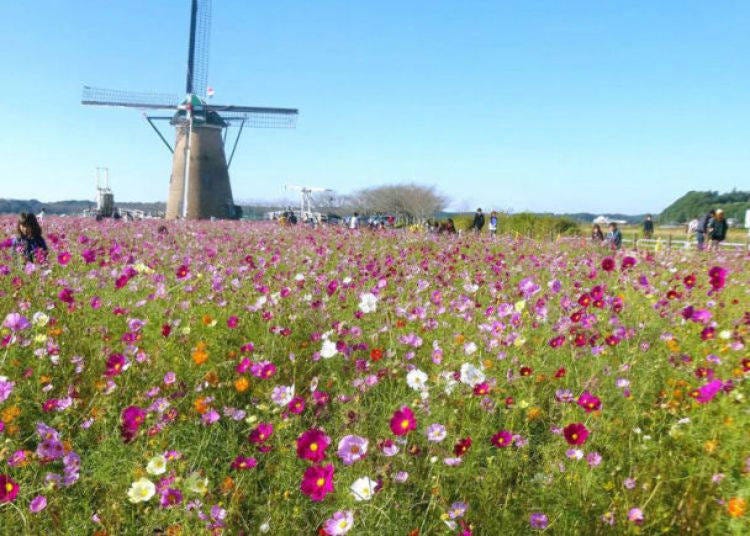 Facing the lake at Sakura Furusato Square, you can see the panoramic view of the Dutch Windmill with a field of tulips, take a boat ride, rent a bike, or have a barbecue watching the sunset. 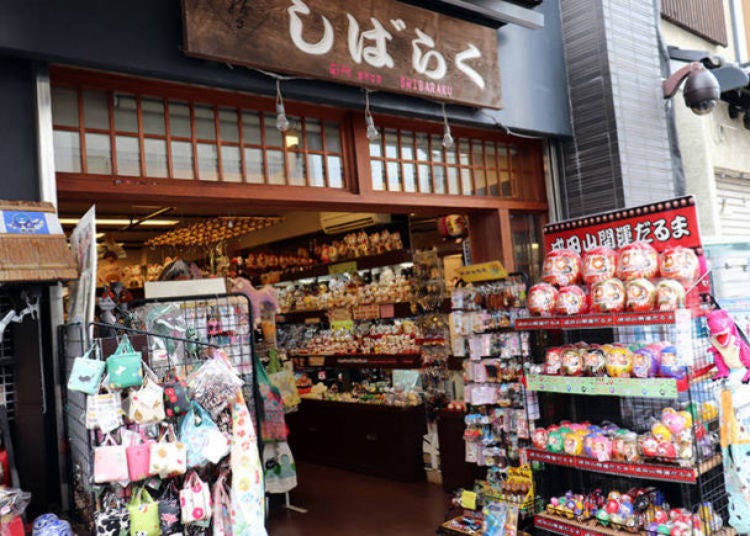 Shinshouji is among the top temples of Japan for a number of visitors. About a 15-minute walk from Narita station on JR line or Keisei Narita station on Keisei line, in recent years, it has also become popular with foreign tourists. On the way to Shinshouji, the road is lined with restaurants and souvenir stores. Among them is “Souvenir Shop Shibaraku” where you can just browse and look at the daruma, Maneki Neko (lucky cat), and other items that have a Japanese feel. 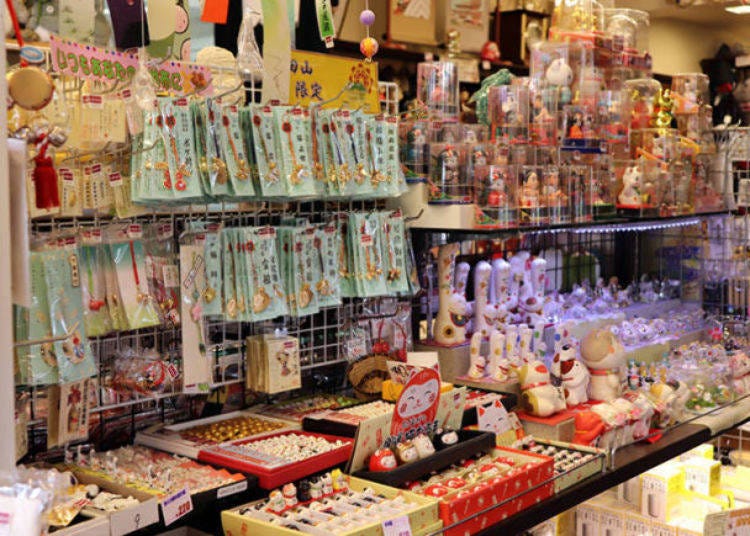 They also have Chiba Prefecture Narita City’s mascot “Unari-kun” and different types of Hello Kitty goods. Why don’t you try to find a Japanese souvenir here? 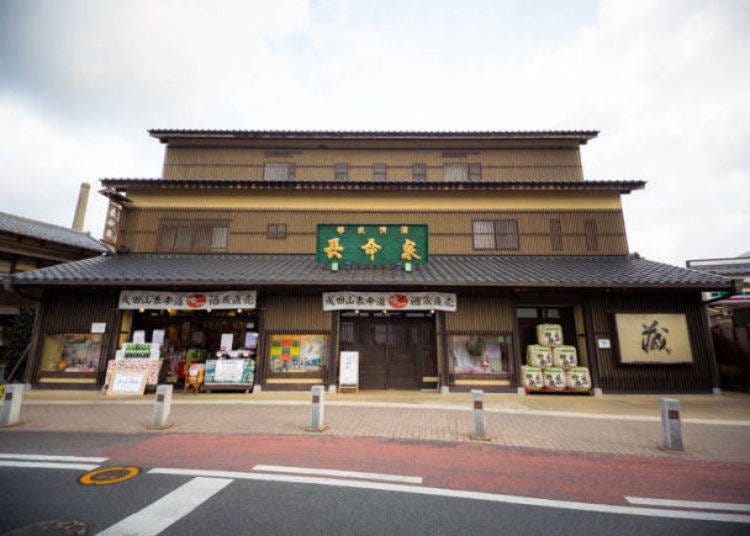 Chomeisen is the only sake brewery on the Naritasan Omotesando street. The well water used to make Sake is renowned for its flavor and quality, a lot of people visiting Shinshouji also pop into this store. It has a retail store selling locally brewed alcohol and well as a stand selling rice malt amazake (sweet sake). 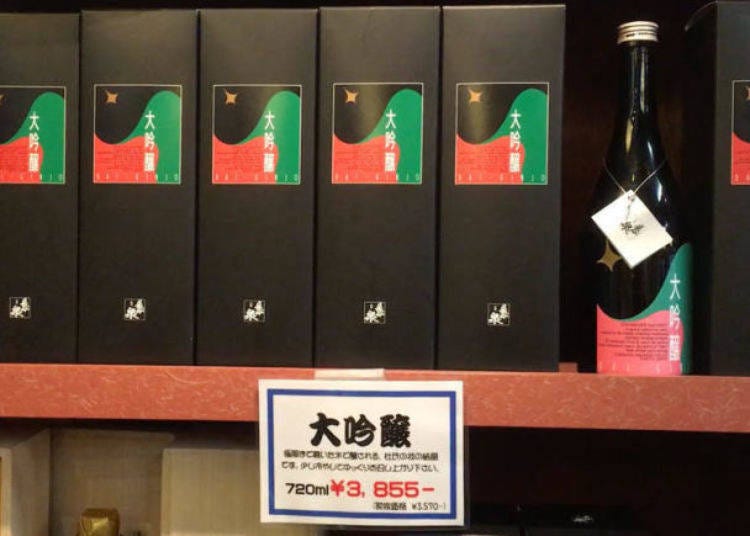 Sake Brewery Chomeisen has a large range of sake for you to try, from a refreshing dry taste to a rich sweet flavor. After tasting the sake, you can take a look at the photos of the sake making process. There are English captions as well so foreign tourists don’t need to worry. 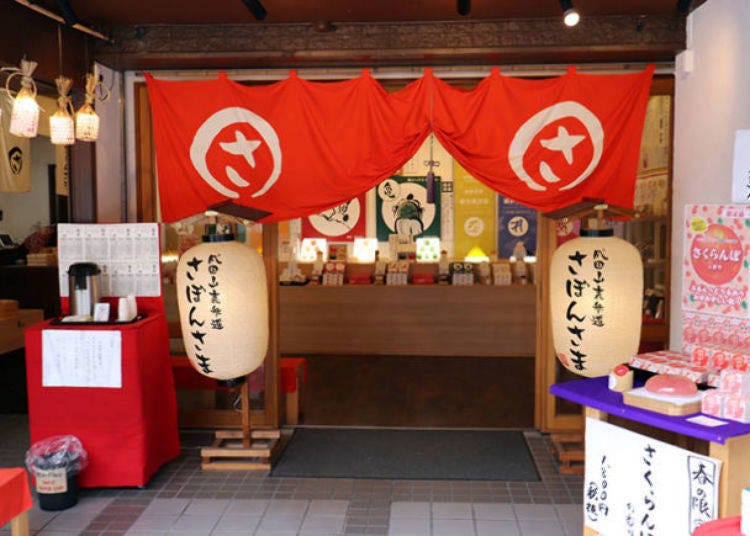 Naritasan Omotesando Sabon Sama is a popular store often featured in the media. It is the only store in Japan that sells the purifying soap “Sabon Sama”. Shinshouji is known for its sacred fire rituals for the harvest. Those prayers from Buddhist teachings are included in the soap. 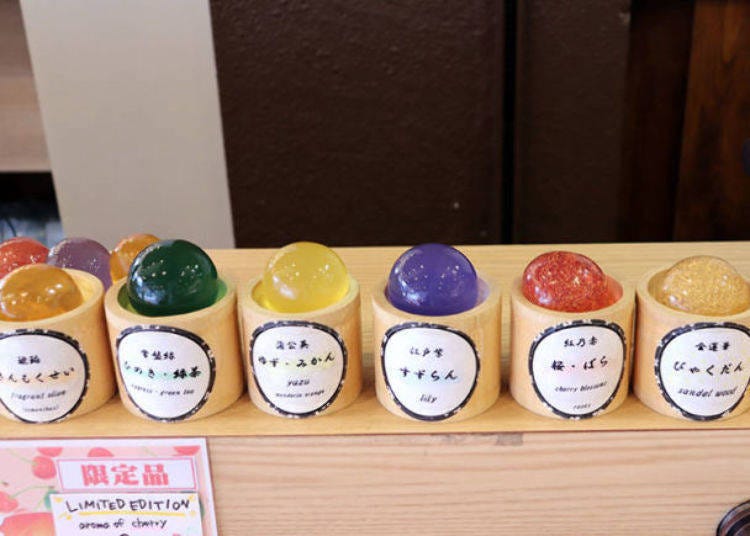 The “Nyoihouju” (Wish-fulfilling jewel) is a soap shaped round like a pearl to grant any wish with its soft and smooth texture. Each color has its own scent. Its daily purifying soap is recommended as a souvenir. 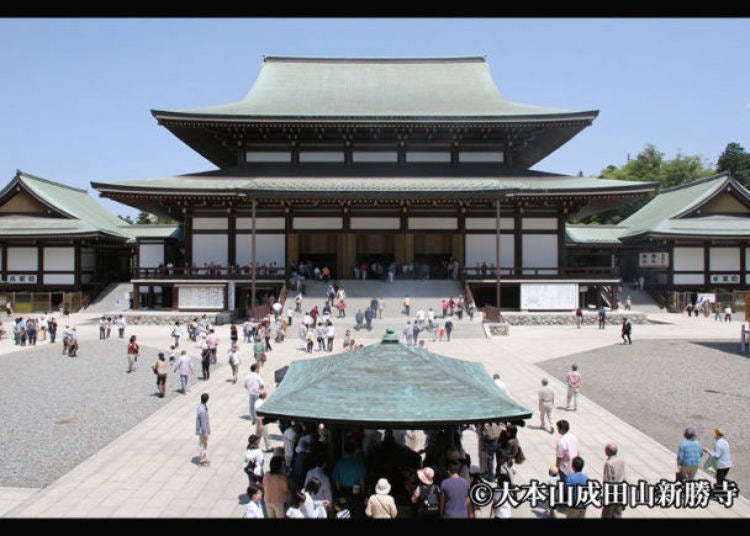 In 940, Naritasan Shinshoji was built to commemorate the suppressing of a rebellion by the forces of the Taira no Masakado and pray for peace. Through expressions of extreme anger, Fudoo Myo-O (Buddhist fire god) saved lots of people and gained the following of many great people in history. The Great Main Hall where prayers are held is the most important building and is open to the public. 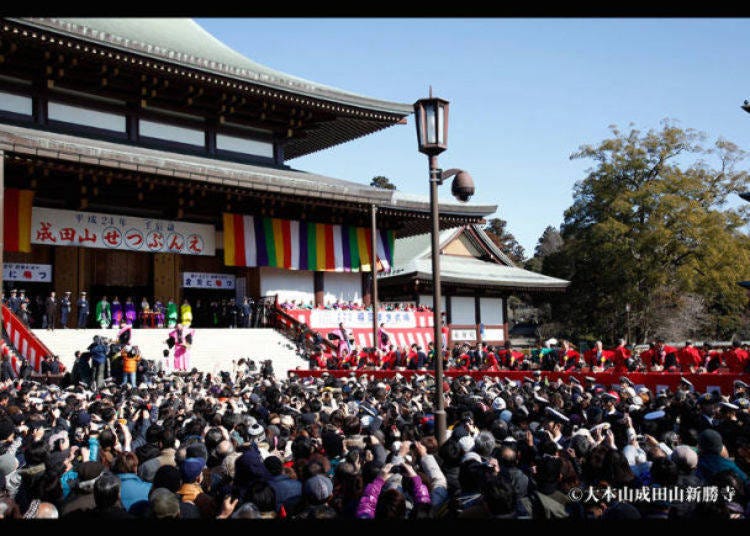 You can see historical structures such as the 58-meter high Great Peace Pagoda with messages of peace from world leaders and the 25-meter Three-Storied Pagoda surrounded by beautiful statues which have been designated as an important cultural property. There is also a park with a waterfall and a pond where you can take a break surrounded by flowers.

Snacks to Enjoy While Strolling Naritasan-Omotesando: Our 5 Gourmet Picks 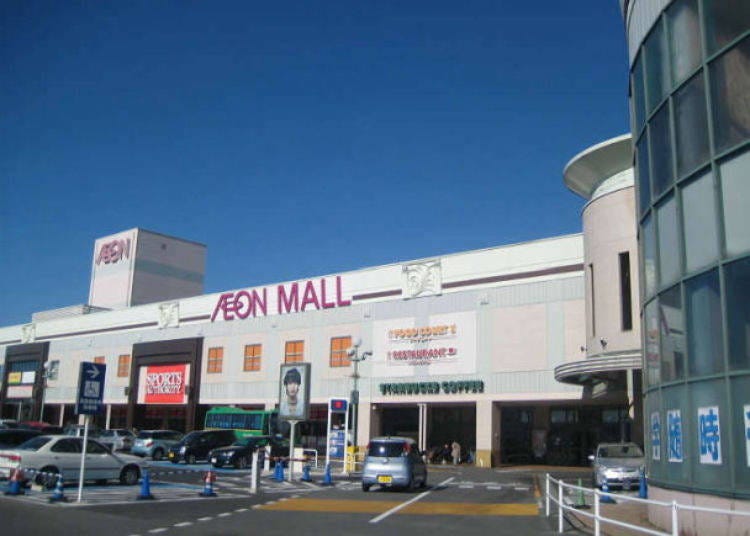 Aeon Mall Narita is a shopping mall close to the airport which you can get to by catching a bus from Narita to Keisei Narita station (Adult one way: 210 yen, running about every 15 minutes). The 174 stores range from food and clothing to entertainment, starting with a large supermarket (Aeon Style) to fashion stores, lifestyle goods, and a variety of restaurants. 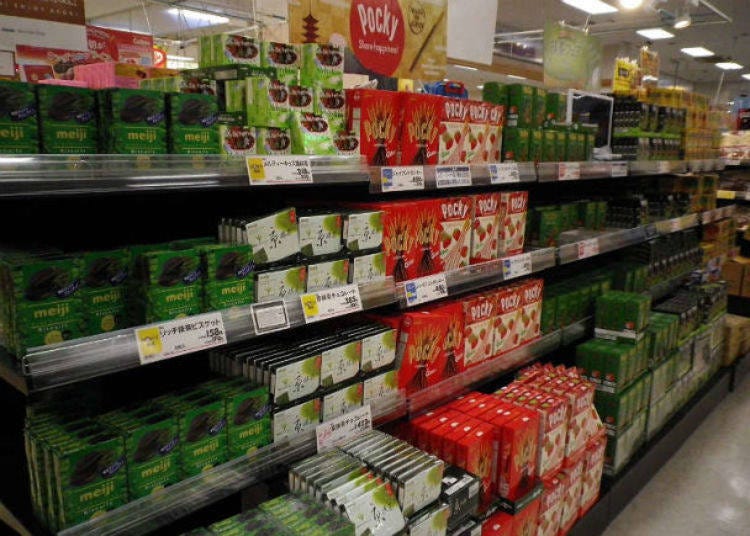 Inside the mall, there are event spaces where stores from around Japan sell local foods or music concerts are held. The food court has 12 stores with Japanese, Western and Chinese cuisine, ice cream, donuts, sweets, a baby room, and kids corner. 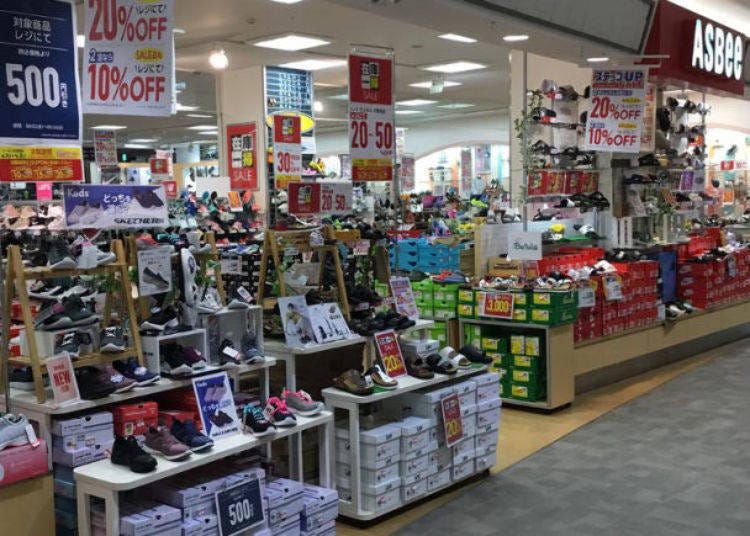 On the 2nd floor of Aeon Mall Narita is ASBee Narita which sells popular sneaker brands like NIKE, Adidas, Converse, PUMA, SKECHERS, New Balance, and casual shoes such as Lee, Timberland, and Redwing. They also have kids, business shoes, and ladies’ shoes. They also stock shoes limited to ASBee, Japan only editions, and made in Japan. 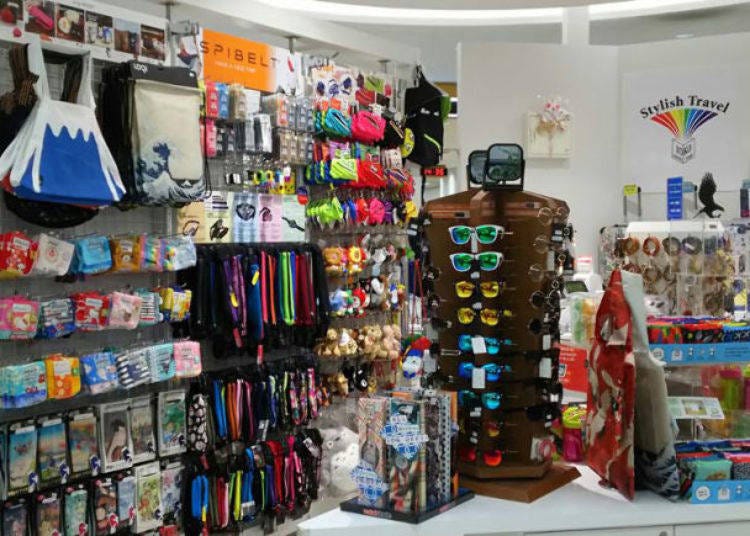 Inside Narita Airport Terminal 2 is a variety store with a fun and fashionable “Stylish Travel” concept, they have an ample selection of travel goods and popular fashion items. Unique stickers, tin badges, key rings, Narita Airport exclusive design t-shirts, suitcases, reusable shopping bags, all make a good travel partner. Why don’t you take a look before heading to immigration? 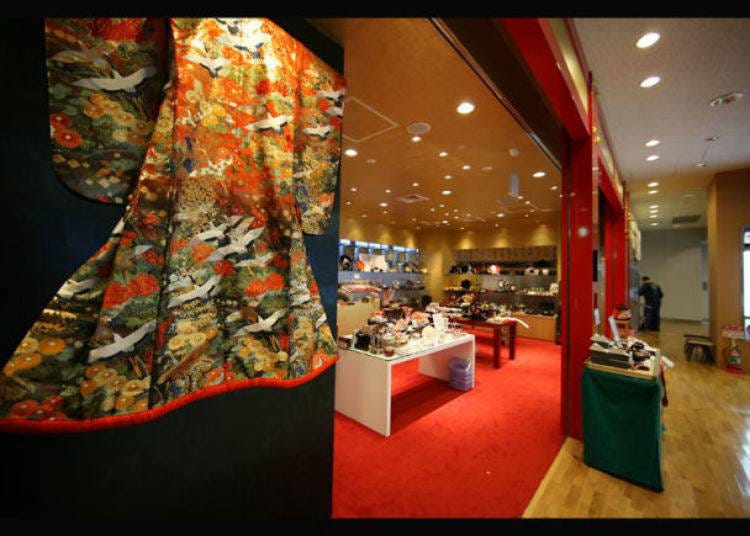 This is a souvenir store in Terminal 1. With “luxurious and magnificent Japan” as a concept, it sells exclusive items made from select factories. You will only find things that display exquisite traditional Japanese techniques in pottery, chopsticks, fans, hand towels, and ceramic pottery. They also have a lot of Tenshodo original goods made by famous craftsmen from all over Japan. Everything is also duty-free. The perfect place for your last shopping trip before you leave.

There’s a lot to enjoy around Narita Airport!

But there are still more places we can recommend. If you still have time, please take a look.