HOME Tohoku Iwate Other Surrounding Areas Of Iwate Pure, Untouched Winter in Japan – 10 Spots to Enjoy the Wonders of Tohoku in Winter! 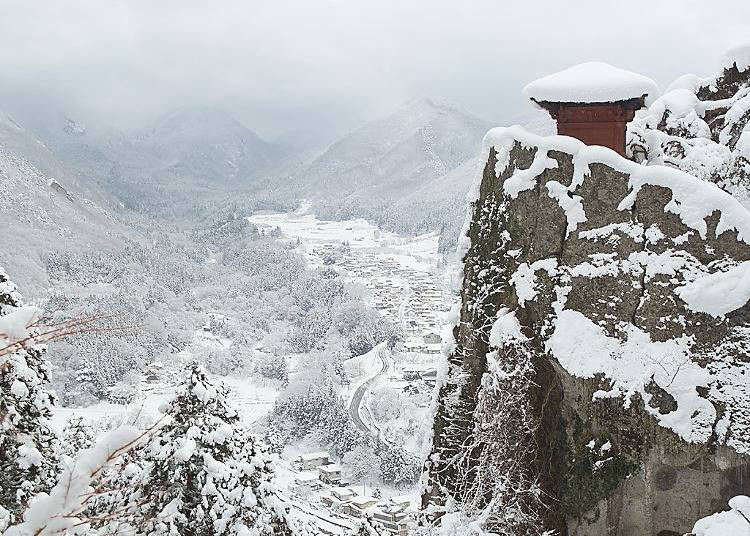 Pure, Untouched Winter in Japan – 10 Spots to Enjoy the Wonders of Tohoku in Winter!

While most of Japan experiences a fairly intense winter, the biting cold and heavy snow of northern Tohoku in winter is an entirely different beast!

From Aomori's frozen waterfalls to the giant icicles in Akita, winter scenery like this only occurs in the coldest of places. While often difficult to bear, witnessing these surreal natural phenomena at their peak is worth braving the chill!

A coastline smothered by snow, charming temples on a frozen mountainside, and some enchanting wintery Ghibli-vibes - we’ll let you in on 10 of Tohoku’s best-kept winter sightseeing secrets! 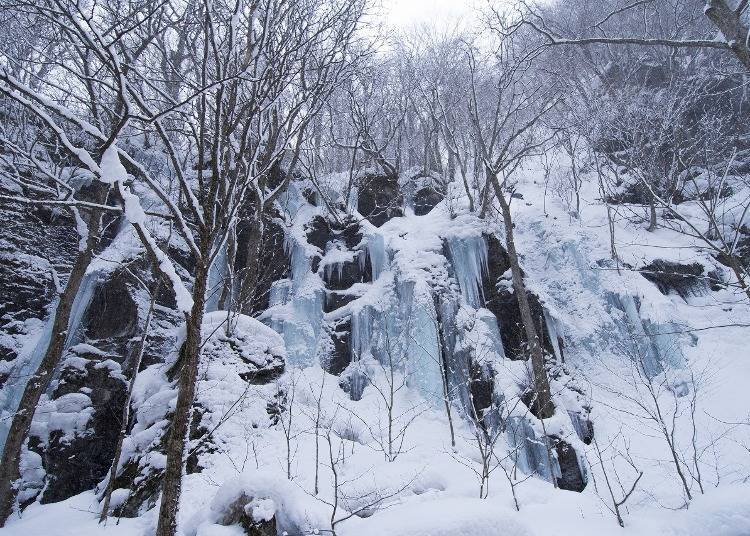 During winter, the surrounding boulders and trees are engulfed by thick snowfall, creating a spectacular frozen landscape that looks like a painting!

The cold is so powerful that, between mid-January and early March, many of the small waterfalls and streams will freeze in place, making it appear as if time itself has escaped for the winter. 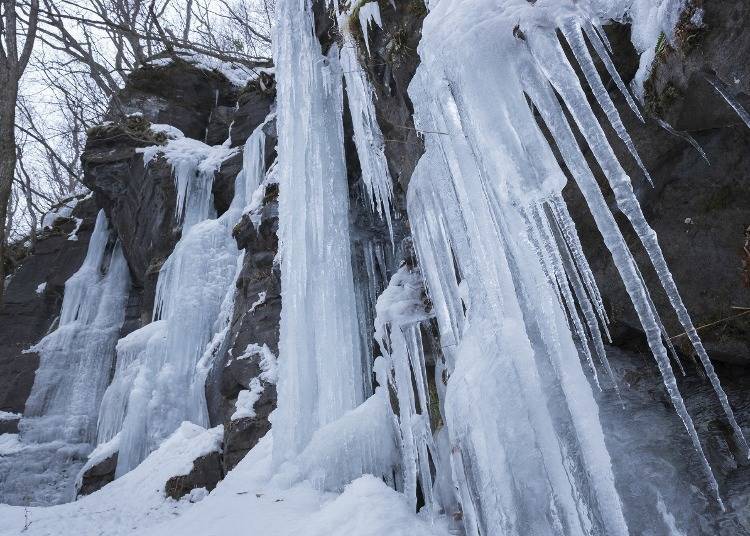 Regular bus service is suspended between mid-November and February, so visitors will need to book a special JR ‘Fuyu no Oirase-go’ bus from Hachinohe Station.

Hiking is also prohibited during winter, so the scenery must be viewed from either the highway or during a special tour.
Of course, who wouldn’t want to see these frozen waterfalls up close!

To make the most of your journey, book your comprehensive Oirase Gorge tour here! 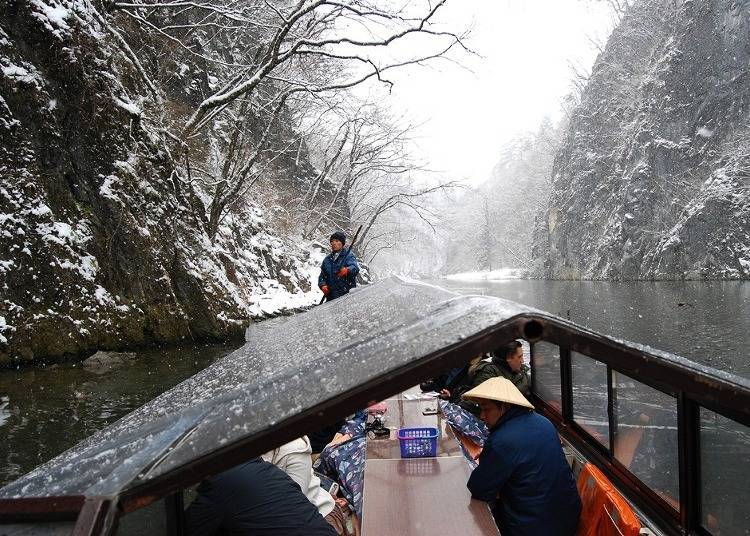 While seemingly in the middle of the deep wilderness, Geibikei, in Iwate’s Ichinoseki City, is actually just a convenient 5-minute walk from JR Geibikei Station!

The most famous sight here is the legendary Satetsu River, which is encased for 2 kilometers on both sides by enormous 100-meter-high cliffs.

To allow visitors to fully immerse themselves in this grandeur, boat tours through the river run frequently! These boats are skillfully maneuvered using only a single paddle by a master rower. 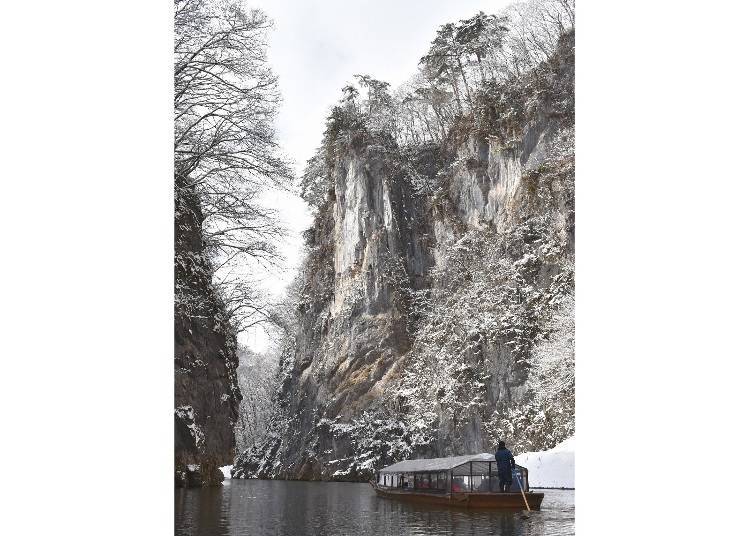 From December to March, when winter comes and the area is dyed black and white, special boats with roofs and kotatsu heaters (Dec. to Feb.) make a welcome appearance, allowing passengers to behold the magnificent scene in toasty-warm comfort! 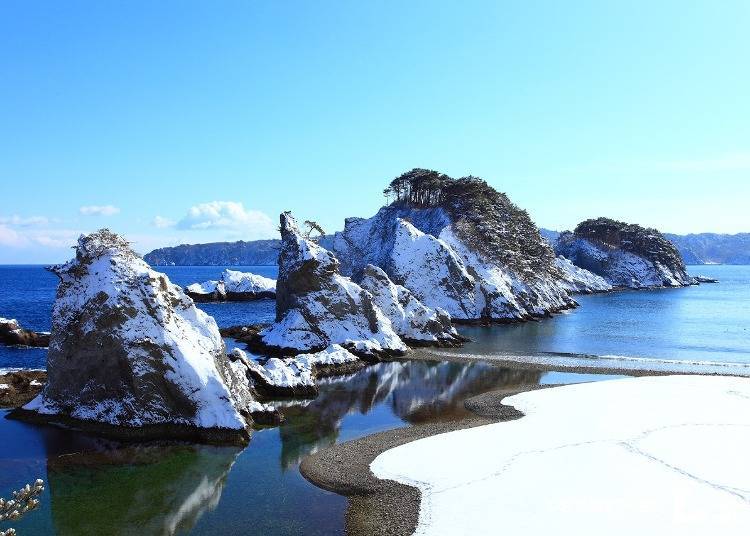 Jodogahama Beach, one of the Sanriku Coast’s most well-known attractions, can be easily reached via the Iwate-ken Kita Bus from JR Miyako Station. The beach is most famous for its distinctive pointy rhyolite rocks and sparkling white sand.

In 1680, a monk visited the area and exclaimed “I never would have believed such a slice of perfection could exist in our world.” Pretty good review, right?

During the deep winter of February, the rocks and coastline are decorated with a dusting of white snow, creating a rarely-seen winter beach! The amount of snowfall varies every year, so double-check in advance to see the conditions.

Iwate Bucket List: 14 Best Things to Do in Iwate 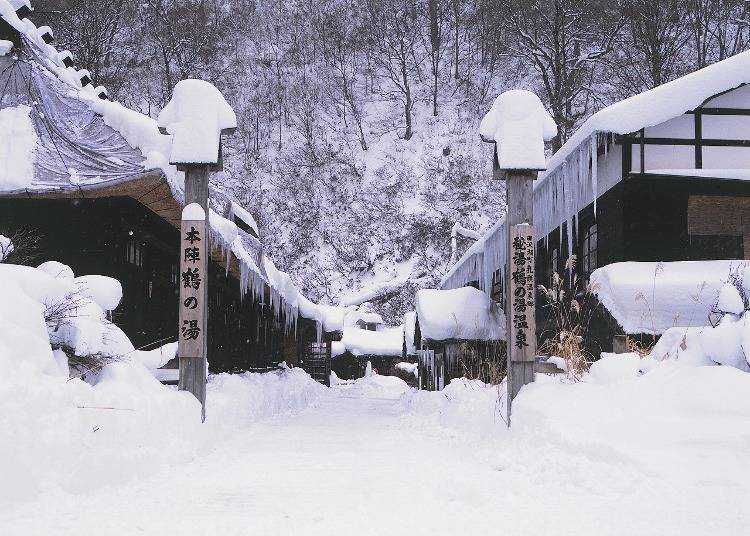 Nyuto Onsen is the collective name for 7 traditional Japanese onsen hotels based around the foot of Mt. Nyuto in Akita’s Semboku City.

Surrounded by a forest of charming Japanese larch trees, visitors can reach this secluded onsen town after a 50-minute ride on the Ugo Kotsu Bus from JR Tazawako Station.

All of Nyuto’s accommodations boast stunning outdoor onsen, allowing bathers to soak in the natural thermal waters while taking in the vivid winter scenery! 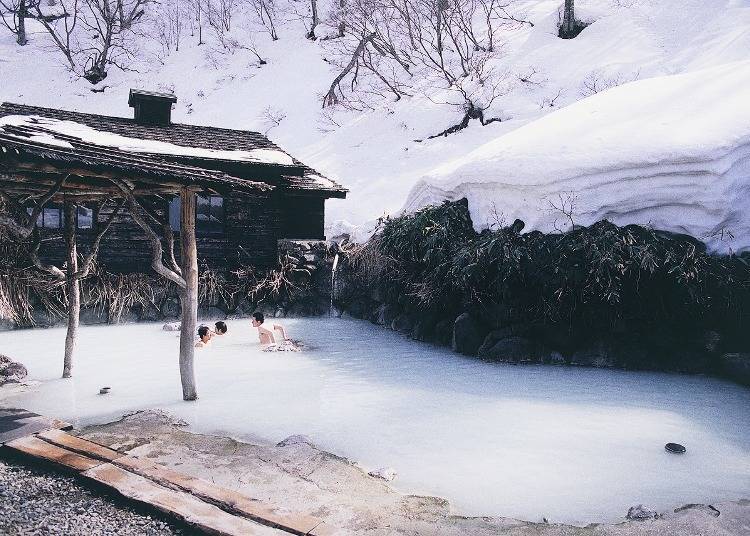 The entire area is completely blanketed in snow from January to March, making the town’s retro wooden buildings even more enchanting! Surrounded by freezing-cold snow bathing in toasty-warm pools is truly the epitome of satisfaction! Some ryokan close during winter, so make sure to check in advance. 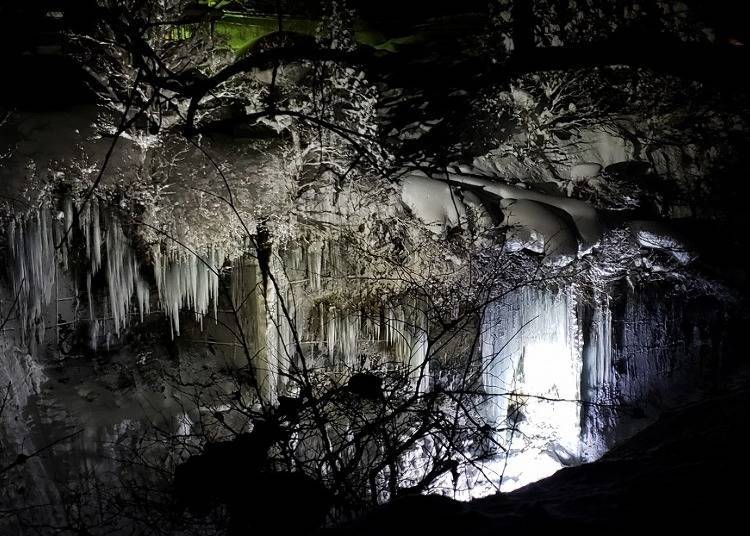 Oyasu, in the city of Yuzawa in Akita, is an impressive valley river known for its distinct V-shaped chasm formed by the Minase River rapids.

You can discover this wonder for yourself via a 50-minute ride on the Ugo Kotsu Bus from Yuzawa Station. Get off at the Kawara Yu bus stop and you’re there! Most famous in the area is the deafening roar of the gushing thermal spring, known as the Oyasukyo Daifun-yu.

From early February, a group of monster icicles up to 20 meters long appear around the spring, creating a complex and mesmerizing natural work of art! An unblemished testament to the beauty of nature, they’re worth braving the cold for!

Akita Bucket List: 20 Best Things to Do in Akita 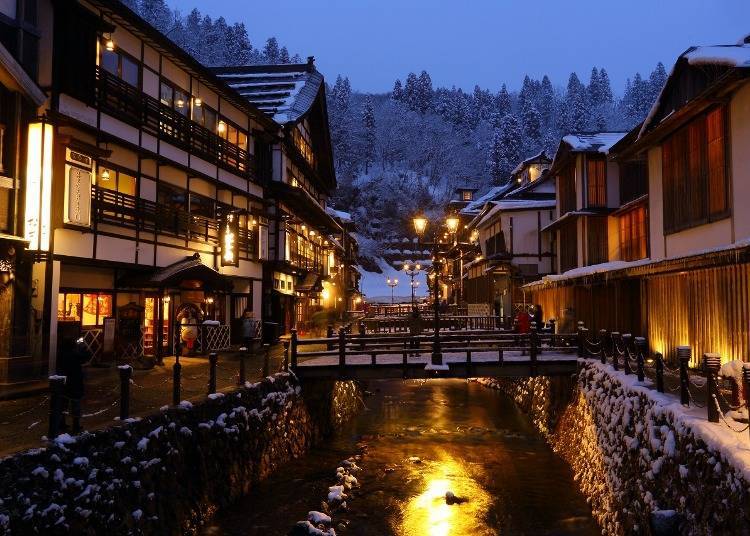 You can get to Ginzan Onsen from JR Oishida Station via the Rosen Bus Ginzan Line in around 40 minutes. Get off at the final stop and walk 5 minutes to find the center of town.

For many, the best time to visit is between January and March, when the snowy scenery is at its height and the transcendental light of the setting sun illuminates the township in an epic display! 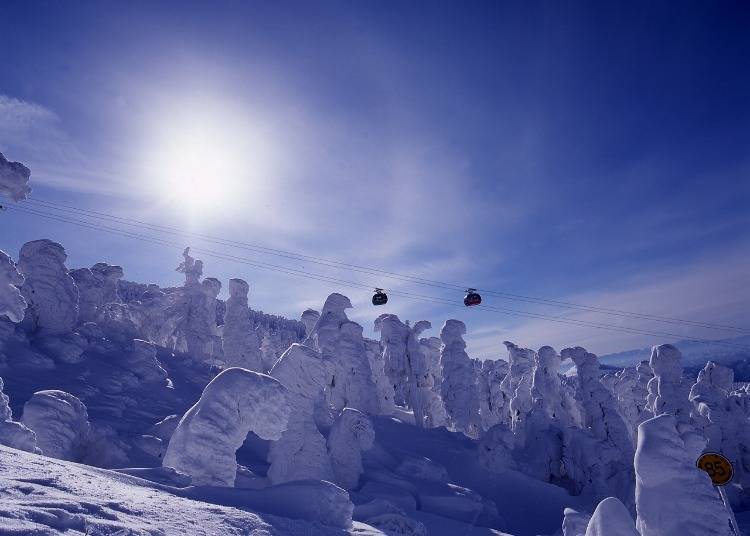 On the border of Miyagi and Yamagata Prefecture lies the unusual phenomenon of the Zao "Snow Monsters."

Every year, from December until March, the forest of Abies mariesii trees slowly gather snow kicked up by the winter winds until they are completely covered. Each has a unique shape, some of which are said to resemble unearthly monsters! 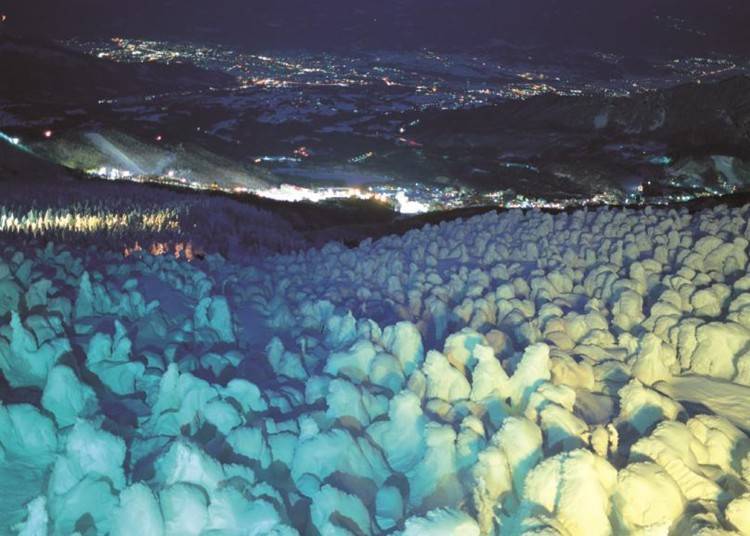 The most convenient way to view these formations is from the Zao Ropeway, which can be boarded from Zao Onsen on the Yamagata side of the mountain.

The frozen trees, known in Japanese as Juhyo, are also illuminated in a breathtaking lights festival from late December to late February, so definitely stay until nightfall!

The ropeway station, which runs at night during the light-up period, can be reached after a 40-minute ride on the Yamako Bus from JR Yamagata Station. 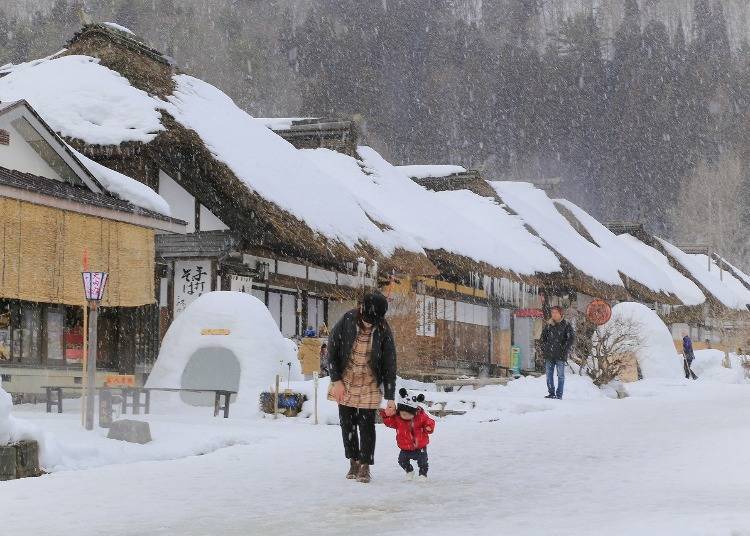 Ouchi-juku flourished during the Edo period (1600 – 1867) as a base for travelers to stay, relax, and send off goods. The main street is lined with around 30 restaurants and stores boasting traditional thatched sloping roofs.

If you want a genuine taste of old-school Japan, this is as good as it gets! And for winter lovers, the entire Okuaizu region is plunged into snow from late December to early March, with meters of snowfall not uncommon! 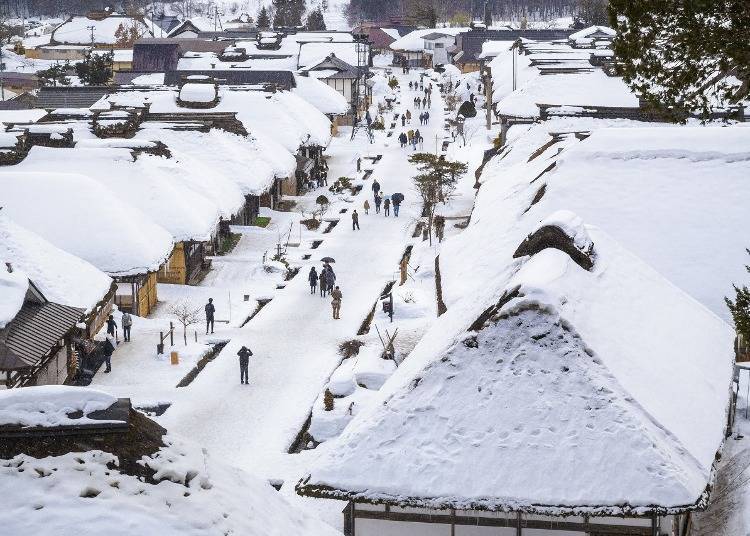 Seeing the snow-covered thatched roofs feels like stepping back 300 years in time! This beauty peaks on the second weekend of February when the streets are lit up by a carnival of snow-made lanterns in the super-popular Ouchi-juku Winter Festival! Bus service is suspended during winter, so you’ll need to take a 10-minute taxi ride from Yunokami Onsen Station. 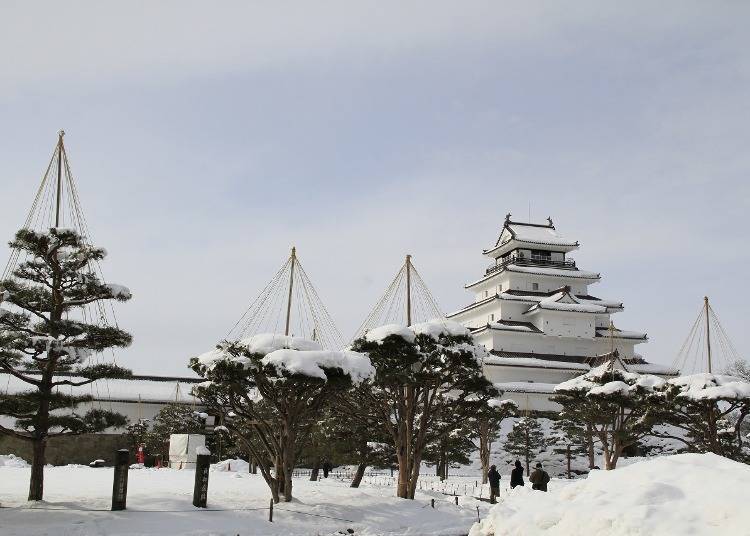 The deeply historic Aizu region of Fukushima is home to the magnificent Tsuruga-jo Castle. Easily found after a 20-minute ride on the Haikara-san sightseeing bus, which can be boarded from JR Aizuwakamatsu Station, this eccentric castle is most recognized through the dynamic contrast of stark white walls and red roof tiles.

The castle tower holds a recreation of what the castle originally looked like in 1868 before it was rebuilt, along with fascinating exhibitions on the turbulent history of Aizuwakamatsu illustrated by genuine relics.

The surrounding fortress and garden are covered by lush snow from late December until early March.

To prevent the delicate pine trees from snapping under the snow's weight, the individual branches are painstakingly tied to ropes and wires to provide extra support. This is a unique sight rarely seen outside Japan's deepest winter regions, so get your camera ready!

10. Yamadera – An Ancient Temple in the Snowy Mountains (Yamagata) 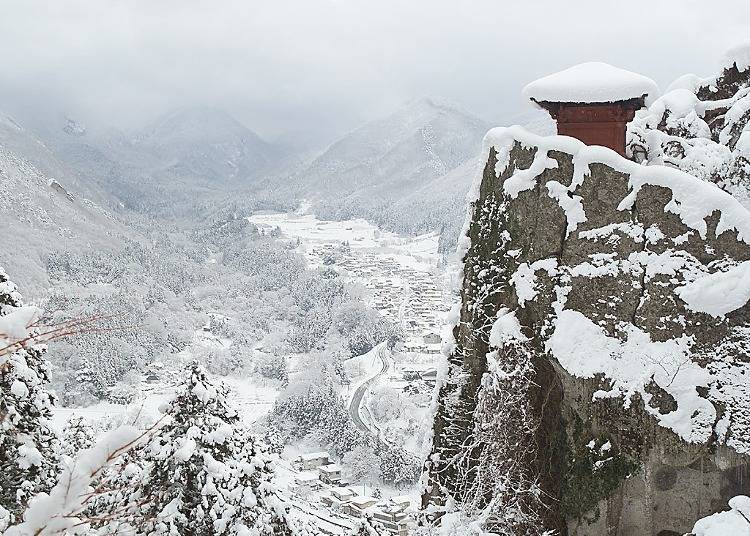 Hojusan Risshaku-ji – locally known as ‘Yamadera, The Mountain Temple,’ is a temple complex spread throughout the mountainside said to have been established in 860 C.E. by legendary Buddhist priest Jikaku Daishi.

After climbing 1015 stone steps to the mountain summit, visitors will be treated to a breathtaking panorama of the harmonious Japanese countryside. Just a short walk from JR Yamadera Station, this once isolated temple is now very convenient! 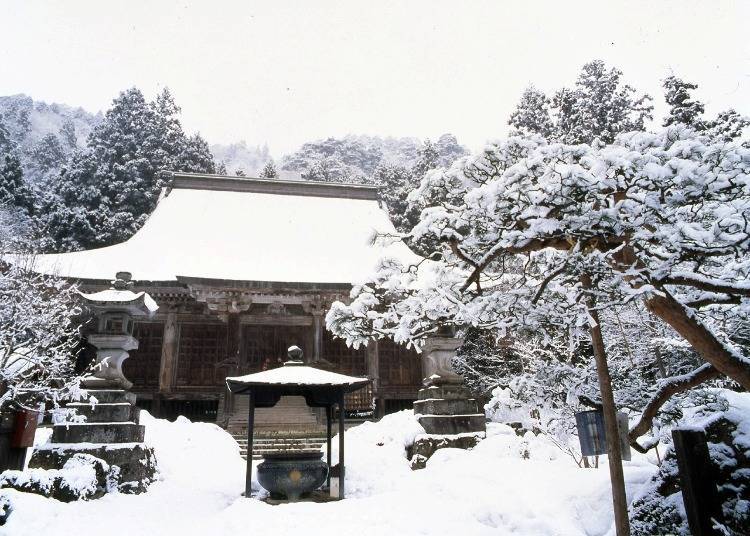 Almost totally monochrome, it’s like one of those Japanese hanging scrolls has come to life! While the temple halls and other buildings are actually closed during winter, visitors are still free to wander the grounds, explore, and pay their respects.

Boundless mountains of frozen valley streams, beaches turned pure white with ice and snow, steaming outdoor onsen gifting an escape from the unrelenting chill, Tohoku is truly a special slice of Japan! If you want to experience all the charms of the deep Japanese winter, there’s nowhere more suitable than Tohoku!


Text by: Shoepress
The information presented in this article is current as of November 2022.

Tohoku's Hidden Gems: These 13 Areas in Rural Japan Look Like Something From A Fairy Tale
*This information is from the time of this article's publication.
*Prices and options mentioned are subject to change.
*Unless stated otherwise, all prices include tax.