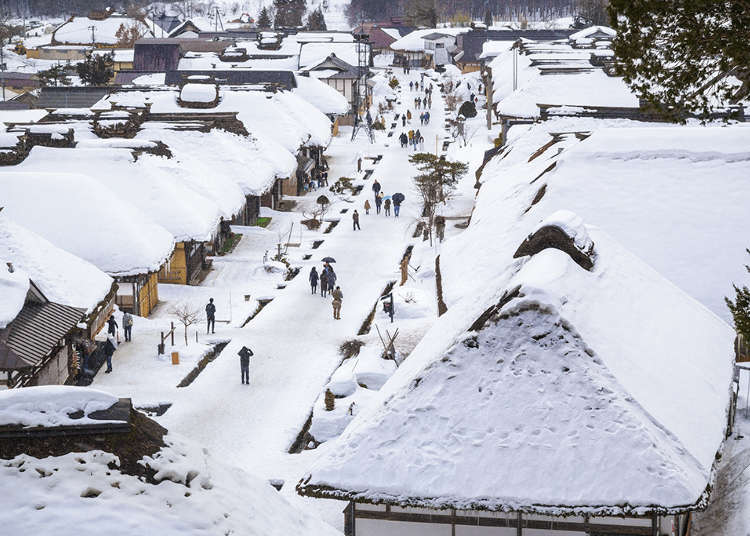 Ouchi-juku is a quaint town of thatched-roof houses worthy of a Hollywood film set. Located in the mountains of Shimogo Town in Fukushima Prefecture, it was particularly prosperous in the 1600s. There are over 30 thatch-roofed houses surrounded by hills and farm fields, and when it snows, the incredible view blanketed in white creates an otherworldly atmosphere.

Over 1 million people visit annually to experience this fairytale-like Japanese scenery. In recent years the popularity increased with the snowy views, which almost looks like a traditional sumi-e (ink wash painting). 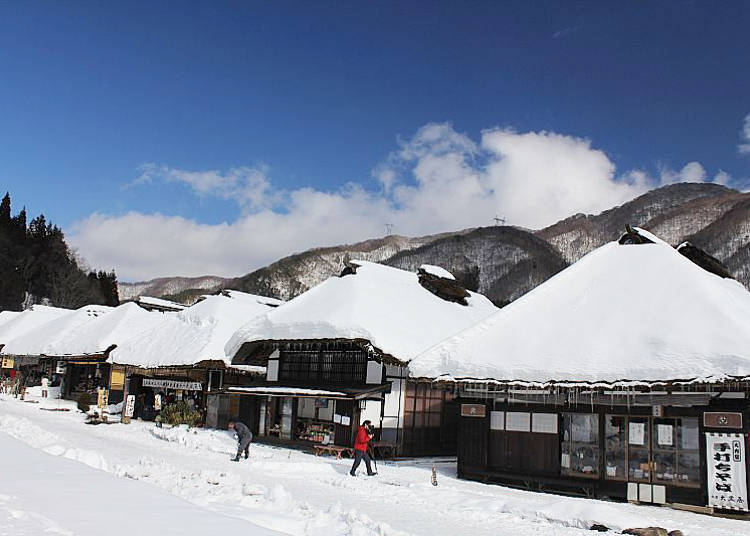 Ouchi-juku opened along the Aizu Nishi Kaido route around 1643. It flourished as a base for routes going from Aizu domain to Nikko Kaido and Edo (Tokyo). The most convenient way to reach Ouchi-juku is to use a rental car from Aizuwakamtasu City. Head south on National Route 121 and take the Prefectural Road 329 going along the mountain stream.

Drive through the cluster of trees for 10 minutes and you will arrive at the parking lot. Walking about 3 minutes from the parking lot, you will reach Ouchi-juku, an inn town that still has the old Japanese townscape. The view of the lined thatch-roofed houses, which is rare these days, is unforgettable. This view has recently been the reason for a rise in the number of international visitors. 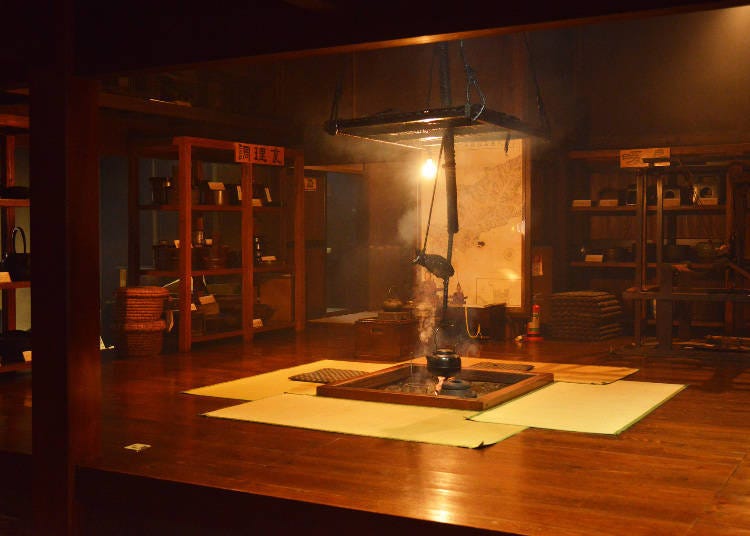 The first place to head to is the “Ouchi-juku Machinami Tenjikan,” which renovated the honjin (inn for government officials) from the inn town period and displaying historical materials.

When you enter the building, there is a lit hearth on the floor with smoke floating into the ceiling, and many precious daily goods used during the Edo period are on display. It is a popular facility since you can experience the livelihood of the Edo period. It’s the perfect place to learn about the old way of living in Japan. 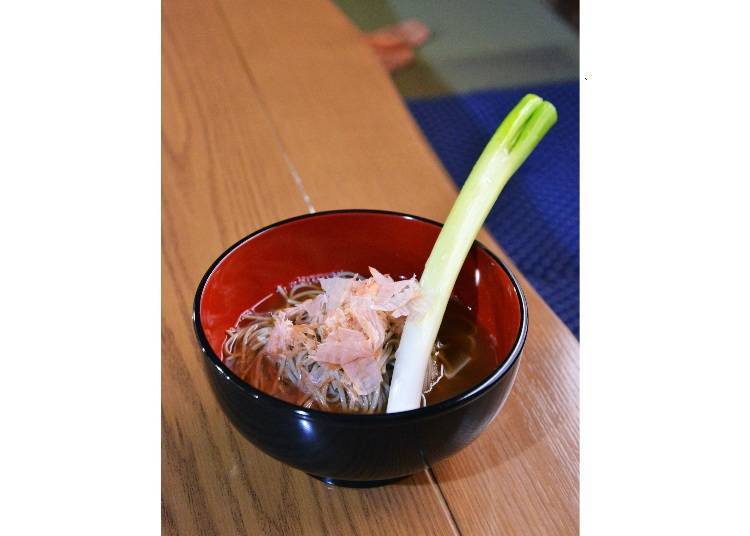 The lord of the Aizu Clan grew up in Shinshu Takato Domain, and in Shinshu grated daikon (Japanese white radish) is used as a topping for soba (buckwheat noodles). So, since then soba with grated daikon is called “Takato Soba” (1,320 yen, tax included).

At Ouchi-juku Misawaya they serve Takato soba in a large bowl with lots of bonito flakes and grated daikon on top and use Japanese leek as chopsticks. With its unique eating method and visual, it became an Ouchi-juku specialty.

Regulars of the Misawaya will scoop the soba with the Japanese leek and nibble on it as they eat. We strongly recommend trying out this local specialty soba when you visit Ouchi-juku. 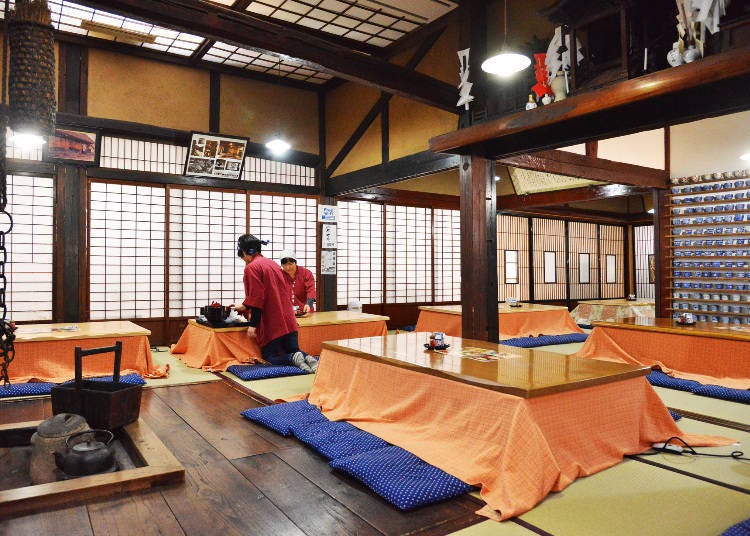 Misawaya also serves the “Mizu Soba [soba eaten with water]” (1,430 yen, tax included), which is made with 100% local wheat and flower that has a great aroma. Mizu soba served with clear water and freshly made soba is a surprisingly flavorful way to eat the dish in the Aizu region. At Misawaya you can enjoy the full flavor of the juwari soba (100% buckwheat flour) and the freshwater from the well in the courtyard. Mountain village dishes such as the salt-grilled iwana (chars) and ayu (sweetfish) made at the floor hearth, and edible wild plants tempura are also popular. 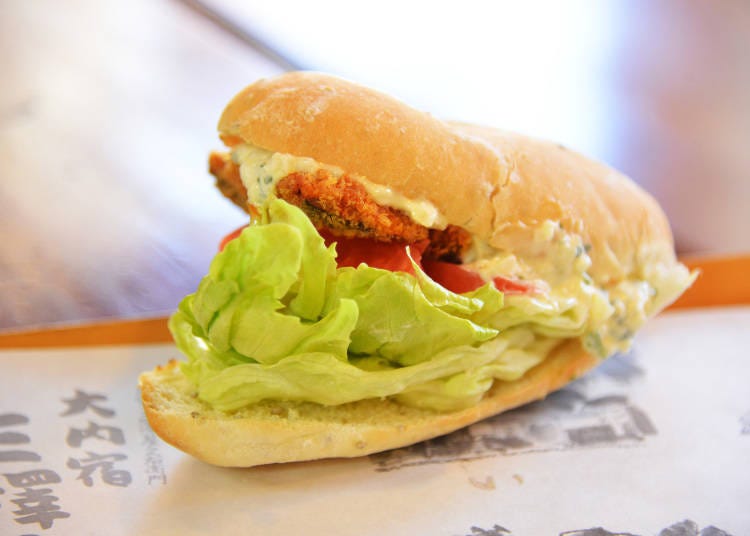 At Misawaya Chaya, the sister store of Ouchi-juku Misawaya, you can make the most of their takeout food. The popular dish is the “Waka-Ayu Sando (young sweetfish sandwich)” (550 yen, tax included), a sandwich made with deep-fried young sweetfish between fluffy buns with lots of tomatoes and lettuce. The generous portion is quite filling. The sandwich is garnished with ample tartar sauce with the right amount of sourness and umami, it goes perfectly with the young sweetfish.

Also, the “persimmon sorbet” (550 yen, tax included) made with Aizu specially Mishirazugaki (Mishirazu persimmon), is popular. The Mishirazu persimmon, which is presented to the Imperial Court, is frozen and the sorbet is served like a parfait. 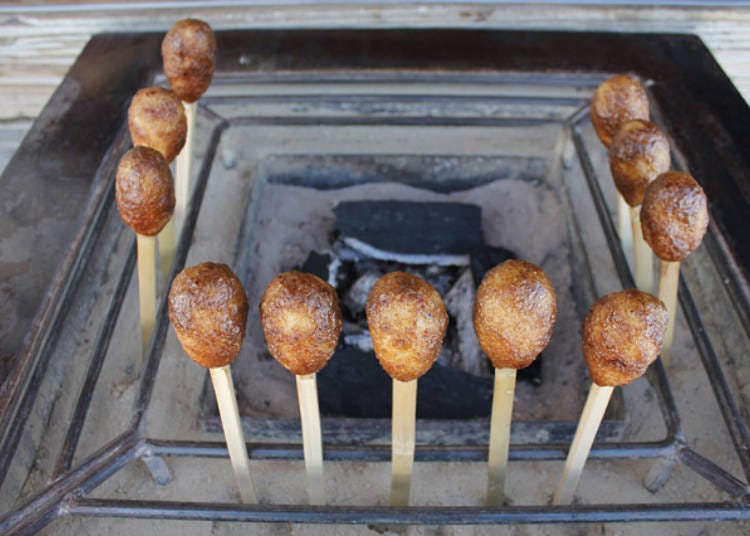 In the center area of the main street of Ouchi-juku, you can enjoy the freshly charcoal-grilled “Shingoro” in front of the thatched roof shop “Ajidokor Minatoya.” The southern Aizu specialty Shingoro, is a skewered rice ball that is flavored with the special sauce made with miso, soy sauce and egoma (beefsteak plant) and charcoal grilled.

It is an amazing local cuisine with a chewy texture and flavor of savory soy sauce. You can also eat in at Minatoya and order dishes like fried chicken made with Aizu free-range chicken, soba, and curry. 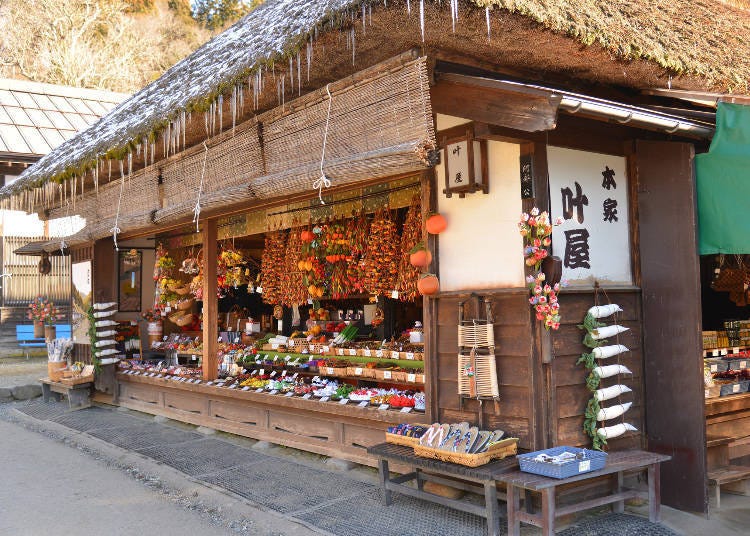 While walking through Ouchi-juku, you will come across “Honke Kanouya,” a store with colorful crafts hanging from the ceiling, creating a scene that looks like something out of a magical anime. To add to the atmosphere, various sized silk crepe fold crafts are displayed along the veranda of the thatch-roofed house.

All the products are handmade in Japan. They use the unevenness of the fabric to their advantage - which is the biggest feature of the silk crepe - and create animals, plants, and zodiac signs. The products have adorable designs and unique handmade rustic textures, which are perfect for decorating your room back home! 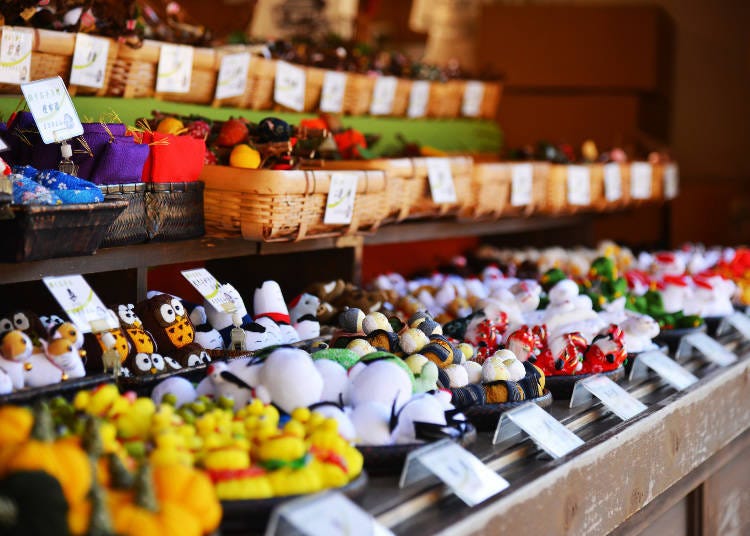 The silk crepe beanbags shaped like vegetables and dolls are popular at Honke Kanouya, and some people buy multiple of them because they come in different colors.

Also, lucky items such as chili peppers and hozuki (Chinese lantern plants), fruits, and flowers can be used as decorations in your room or the entrance of the house.

Yamagataya is located in the center area of Ouchi-juku. The restaurant recreated the old hatago (inn and lodging facility) atmosphere, by restoring the veranda, itado (wooden door) and other areas. The first thing you will notice when you enter is the large floor hearth. The floor hearth, which used to be a common sight in homes, is used to salt grill iwana and smoke fish for kotsuzake (char bone flavored sake).

The popular dish on the menu is the handmade soba made with local buckwheat flour, which has a great aroma and goes down smoothly. Also, the slightly big tochi mocha (rice cake) (300 yen for 1, tax included) is popular. Tochi no mi (Japanese horse-chestnut) is very bitter, but after preparing it for a week by soaking it in warm water and removing the bitter taste, it is mixed with mochi and it creates a rich flavored mochi. At Yamagataya, it is eaten with kinako (roasted soybean flour), but you can order it with soy sauce. 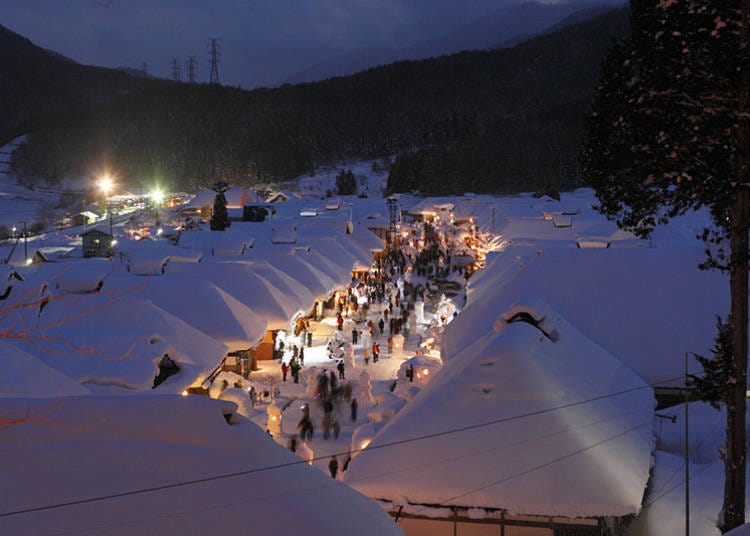 In 2020 the 34th Ouchi-juku Yukimatsuri (Snow Festival) will be held; it is a fantastic festival that is held when Ouchi-juku covered in snow. This year it was held for two days on February 8th and 9th, and the popular nighttime firework show is held on the first day. Large snow lanterns and kamakura (snow dome house) are set up around the area, once the sun sets they are illuminated and it creates beautiful scenery.

During the winter, many shops will close, but during the festival period, all shops are open and you can enjoy various Ouchi-juku cuisine. (Due to the unusually warm winter from January to February 2020, there may be difficulties in creating snow lanterns and kamakura) 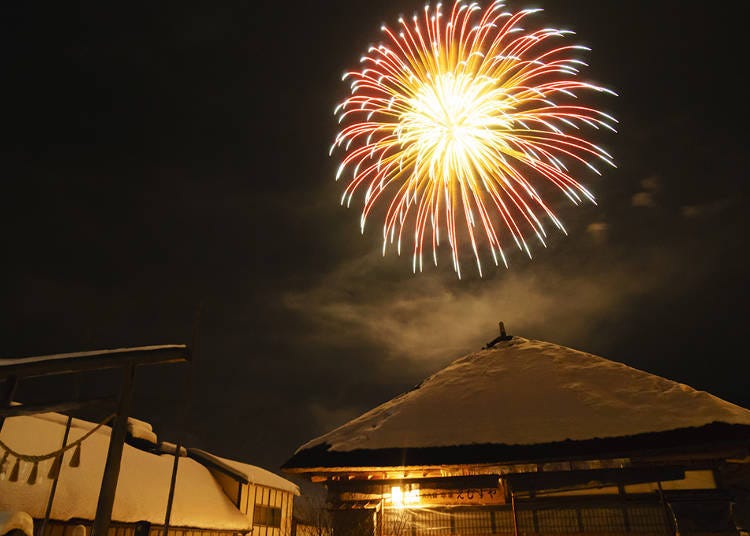 The fireworks will start after 6:00 pm on the first day. Being able to see fireworks over snow-covered thatched roofs is only possible in Ouchi-juku. It is cold, but the fireworks under the clear winter sky is amazing. We recommend wearing boots since Ouchi-juku has a lot of snow mid-winter. Make sure to dress warmly with hats and gloves.

It is possible to drive to Ouchi-juku parking lot, but if you are not confident in driving in snow, there is a shuttle bus from Yunokamionsen Station. The Ouchi-juku website is available in various foreign languages such as English, Thai and Chinese. We recommend taking a look at the website beforehand.

At Ouchi-juku, you can see the traditional scenery of Japan combined with the surrounding nature throughout the four seasons. The snowscape of winter is on a different level. We strongly recommend visiting during the snow festival!

Fukushima Sightseeing: Top Attractions and Places to Visit in Fukushima
Tohoku's Hidden Gems: These 13 Areas in Rural Japan Look Like Something From A Fairy Tale
*This information is from the time of this article's publication.
*Prices and options mentioned are subject to change.
*Unless stated otherwise, all prices include tax.