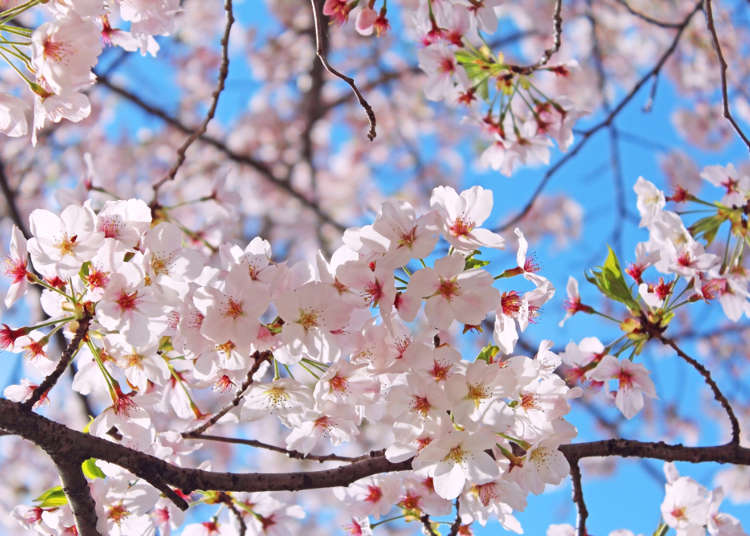 Japan's Most Famous Sakura Tree: What Kind of Flowers Are Somei-Yoshino Cherry Blossoms?

During the sakura season, all kinds of beautiful cherry blossoms bloom all over Japan. Of over 300 types of wild and domesticated varieties, the Somei-Yoshino tree (also known as Yoshino cherry) is the most common.

In fact, you'll find Somei-Yoshino trees planted all over central Tokyo, including on embankments, in parks, and lining the streets. It is certainly the most familiar cherry tree to Japanese people. But why is it so popular, and what are curious facts about it? Here we'll introduce the Somei-Yoshino tree, including its features, flowering times, and famous places where you can see them.

1. Where did the Somei-Yoshino tree come from? 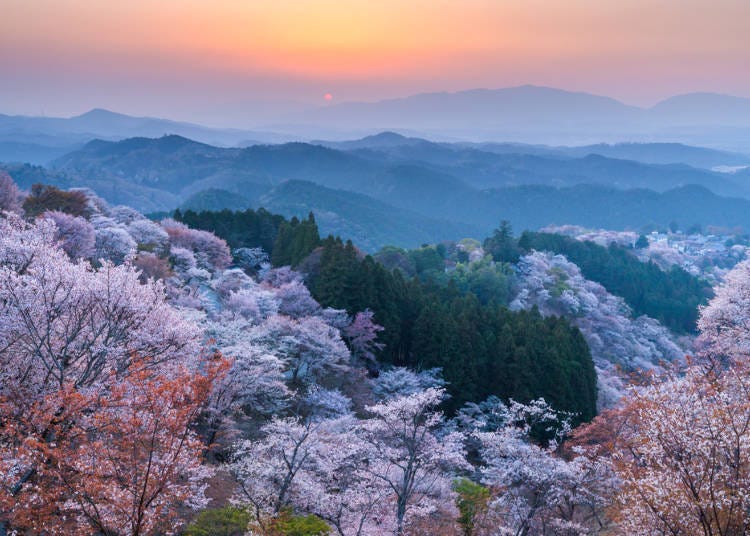 The exact origins of the Somei-Yoshino tree are still unknown, though some say they were first cultivated by farmers in Somei Village (currently Komagome) in Toshima, Tokyo during the Edo Period (1603-1868).

They are believed to have been named after Mount Yoshino, a famous cherry blossom spot in Nara Prefecture. However, later research revealed that many of the cherry blossom trees in Mount Yoshino are actually of a different variety of cherry trees native to Japan called Yamazakura.

In any case, as they were being sold in Somei Village around 1900, they became known as the Somei Yoshino tree.

Many scholars continue to investigate the origins of the beloved Somei-Yoshino tree. Though different theories have emerged, a recent DNA analysis showed that they could be a mix of the Oshimazakura and Yamazakura wild cherry trees that are native to the Seven Islands of Izu, the Izu Peninsula, and the Boso Peninsula in southeastern Honshu.

This wild species is also found in abundance in the Kanto Region and blooms around mid-March, so it is also believed to be of the Edo-higan variety.

Another past theory suggested that they originated from the Eishu-zakura trees found on Jeju Island (South Korea). Today, however, Somei-Yoshino trees are regarded as a native tree to Japan. 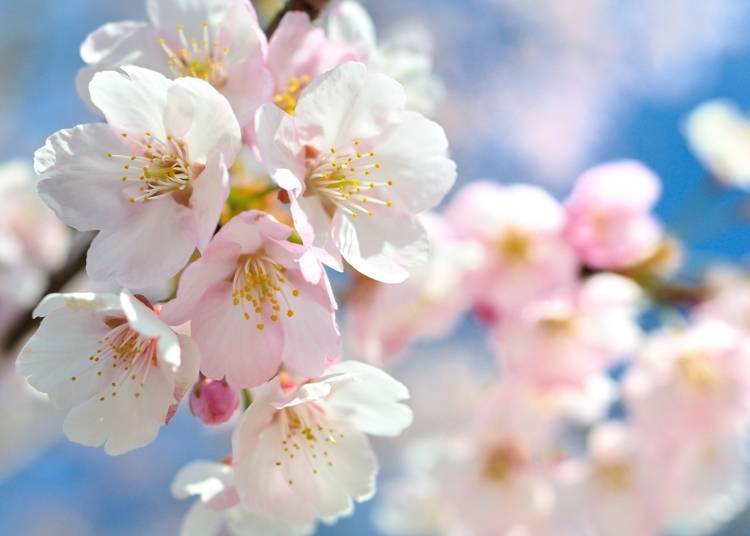 The flowers are oval-shaped and 2-3 cm in length, with 5 individual petals per flower. They usually bloom in bunches of 3-4 flowers, and are pale pink when they first bloom, becoming whiter as the days go by. Green leaves replace flowers once the petals have fallen.

Somei Yoshino trees grow faster than the wild cherry trees that grow in large numbers, but their flowers grow larger and denser on the branches. Cherry blossoms begin to grow in about five years. These trees were planted all over the place after the Meiji Period, resulting in many famous flower spots.

Somei Yoshino trees are cloned, cut and grafted by hand, allowing their beauty and nature to be passed down from generation to generation. Because they are cloned, there are no other varieties of Somei-Yoshino tree.

2. Yoshino Sakura Flowering Times and When to See Them 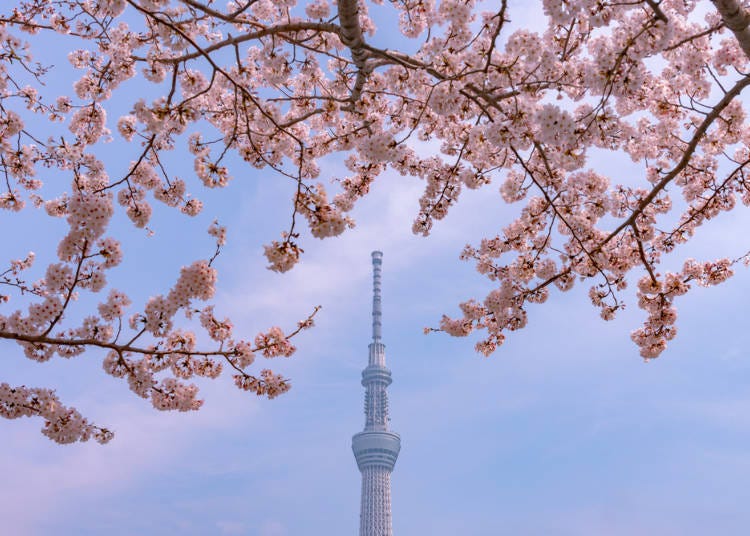 The flowering time of Somei-Yoshino trees is greatly affected by the temperature. The Japan Meteorological Agency has designated specific trees in various places to observe and record data.

Trees are considered to be "flowering" once 5-6 flowers start to bloom, and "full bloom" when 80% or more of the buds open. Expected flowering and peak dates are announced by the Japan Meteorological Agency.

Japan Cherry Blossom 2021 Forecast: When & Where To See Sakura in Japan

Flowering dates are marked on a map of Japan, with similar dates connected by a line. This is called the "cherry blossom front."

In Kyushu, located in the southern part of the Japanese archipelago, flowering usually begins in mid-March, reaching full bloom towards the end of March.

The cherry blossom front moves from the warm south up to the north, blooming in order from Shikoku and Honshu in late March, reaching full bloom in about a week. The Tohoku Region in northern Honshu blooms in April, and Hokkaido blooms in late April. The best time to see these trees are in May.

Once flowering times are determined, they are reported on the news so people can start planning their hanami based on the flowering forecast. 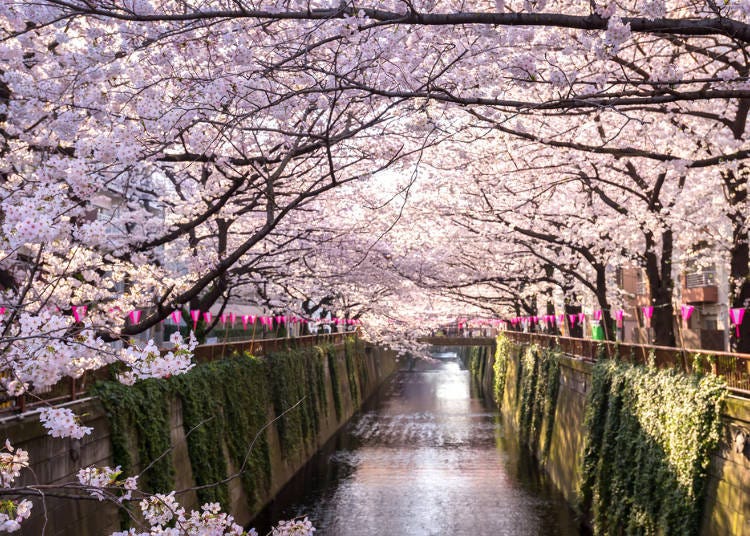 Here are some questions foreigners in Japan often ask about cherry blossom season.

Q1: Are Somei-Yoshino trees found all over Japan?
A: They can be seen almost all over the country, except for central and northern Hokkaido, located in the northern Japan, and Okinawa and the Amami Region, located in the south. Many are planted around schools and houses, even in the central cities.

While you won't find Somei Yoshino blooming in the Amami Region or Okinawa, you can see scarlet-colored Hikan-zakura (also known as Kanhi-zakura), which reach full bloom in January. Ezoyama-zakura trees bloom in central and northern Hokkaido, and reach full bloom in May.

Many trees planted in crowded urban areas tend to die quickly due to the environment. Somei-Yoshino trees live much longer when maintained in a good environment, however, they generally have a shorter lifespan than other cherry blossom varieties.

Q4: Do they produce cherries that you can eat?
A: Somei-Yoshino trees are grafted, so they are all cloned from the same gene. Because Somei-Yoshino trees do not pollinate, they cannot produce seeds. However, some trees do bear small cherries, shortly after the flowers have fallen, a few millimeters to a centimeter in size. They're not poisonous, but they're sour and tart, so we don't recommend eating them. 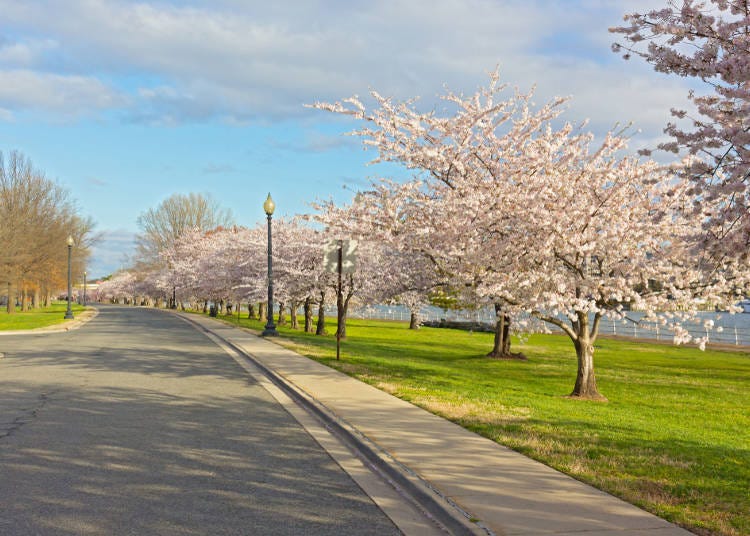 His friend, an entomologist, also planted cherry blossoms in his own garden, and held a cherry blossom viewing tea party there. Eliza Ruhamah Scidmore was an author who loved Japan, and wrote about Japanese cherry blossom trees.

She joined the group and began planting cherry blossoms in a park built to reclaim the Potomac River.

Thanks to the cooperation of many people, including the President's wife and the Consul General in New York, the Tokyo Metropolitan Government decided to present them to the United States from Japan as a gesture of goodwill.

There are many famous places where you can see Somei-Yoshino trees all over Japan. Here are some recommended sightseeing spots with incredible landscapes, all centered around cherry blossoms. 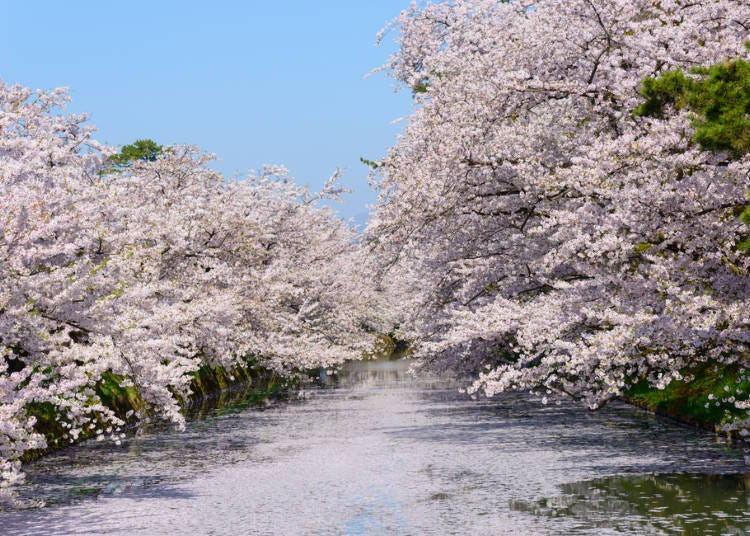 This park is part of Hirosaki Castle, where the castle gate and stone walls remain. About 2,600 cherry trees of 52 species, including weeping cherry blossom and yae-zakura trees, are planted on the vast site.

More than 400 Somei-Yoshino trees are over 100 years old. This park has been selected as one of the 100 Best Cherry Blossom Spots in Japan. On the north side of the outer moat, scattered petals blanket the gently-flowing water's surface in a carpet of pink.

・Best time to see: Late April to early May

Nearby Sightseeing Spot
・Fujita Memorial Garden
A modern residence and garden built in 1919. There is a coffee shop with a view of the garden and residence that once belonged to Kenichi Fujita, the original owner. 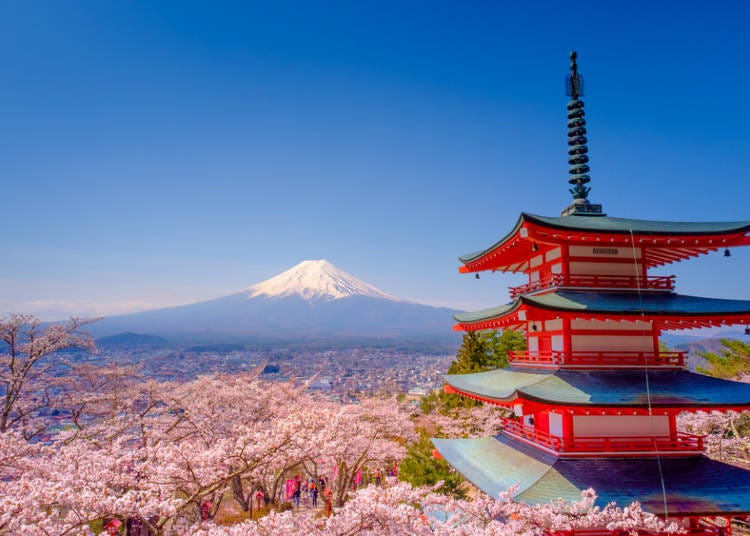 This spot is located at the foot of Mt. Fuji at an altitude of about 650-850 meters. You can see Mt. Fuji from the north side. 650 Somei-Yoshino trees are planted in this park.

It has become increasingly popular with tourists for the gorgeous, panoramic cherry blossom view with Mt. Fuji and the five-story pagoda in the background.

Nearby Sightseeing Spot
・Fuji-Q Highland
This popular amusement park houses more than 10 types of scream machines, including the world's largest roller coaster, and a haunted house. There are also family-friendly attractions and character areas, as well as a hot springs facility and a hotel. 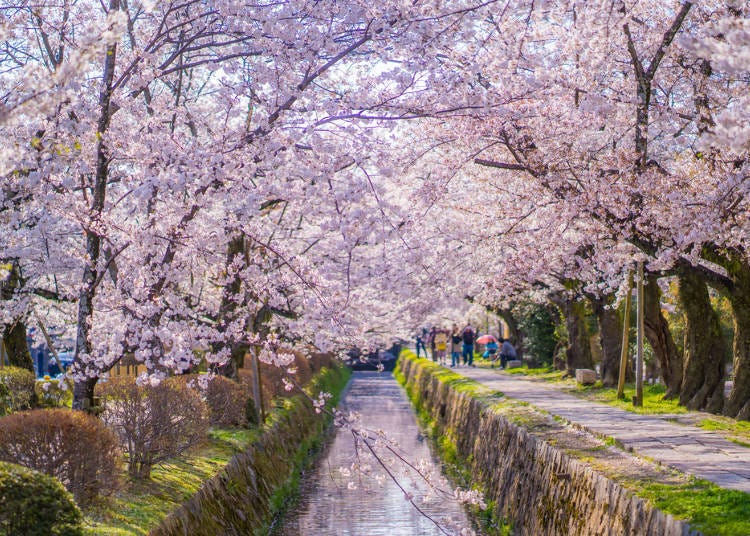 Around 400 to 500 cherry trees line the Philosopher's Walk, a road along Lake Biwa Canal that runs from Ginkakuji to Nyakuoji Bridge. About 300 of the trees are Somei-Yoshino trees.

When they reach full bloom, the path transforms into a beautiful tunnel of cherry blossoms, petals floating along the gently flowing water. As one of the "100 Best Roads in Japan", this popular spot is famous for both its cherry blossoms in the spring and colorful leaves in the fall.

Nearby Sightseeing Spot
・Shinsho-do
This is a temple of the Tendai Sect, dedicated to the principal image of Amida Nyorai, said to protect women. Several structures in the precincts are designated Cultural Properties of Kyoto Prefecture, including the three-storied pagoda, the mountain gate, the Ganzan Daishido Hall, and the bell tower. 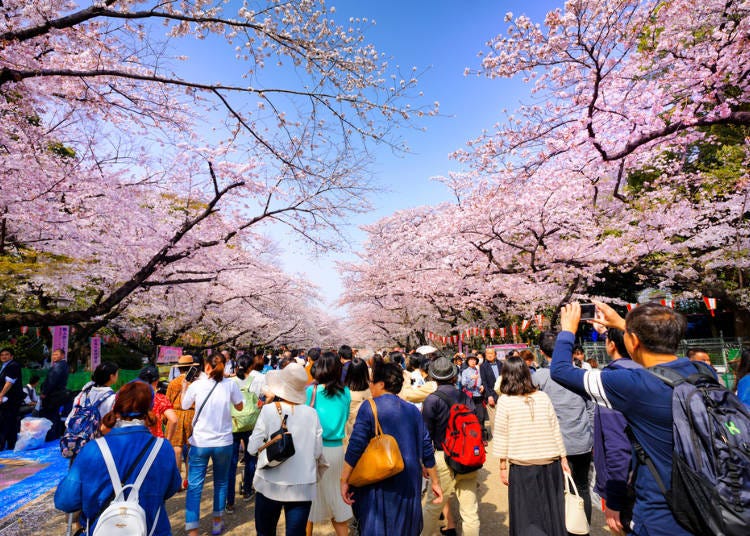 This famous cherry blossom spot is practically representative of Tokyo. It has drawn in crowds of people for hanami since the Edo Period and has been selected as one of the 100 Best Cherry Blossom Spots in Kanto.

There are about 800 cherry blossom trees of 50 varieties such in full bloom, including Somei Yoshino trees. The Shushiki-zakura tree behind Kiyomizu Kannon-do is a 9th generation cherry tree that has been passed down since the Edo Period!

Nearby Sightseeing Spot
・National Museum of Nature and Science
This museum's Japan Pavilion has several permanent exhibitions about Japan's history, biology and science exhibits in the Earth Pavilion, and several other special exhibits. 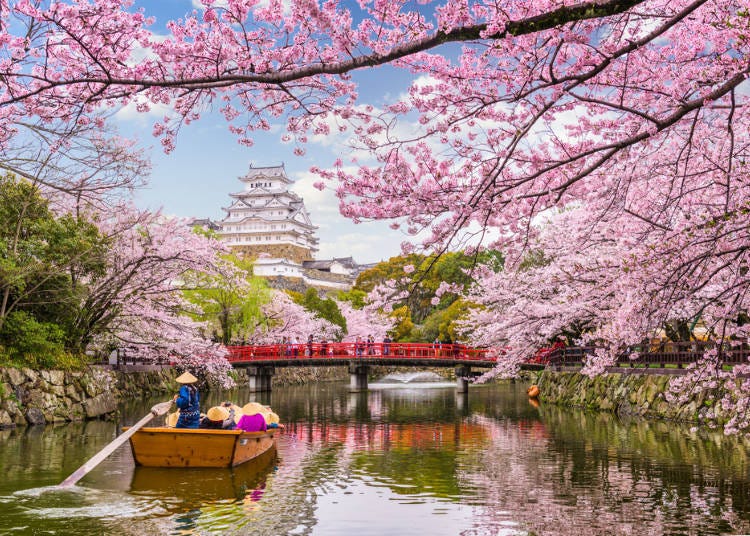 Approximately 1,800 Somei-Yoshino trees are planted around Himeji Castle, a World Cultural Heritage Site that has been selected as one of the 100 Best Cherry Blossom Spots in Japan.

The colorful cherry blossoms stand out beautifully against the white walls of the castle, sometimes called Shirasagi Castle (White Heron Castle). Some famous spots here include Kokoen Gardens, an area made up of nine smaller Japanese gardens, Sannomaru Square, with its rows of cherry blossom trees, and Nishinomaru Garden with its weeping cherry trees.

Nearby Sightseeing Spot
・Egret Himeji (68-290 Honmachi, Himeji City, Hyogo Prefecture)
A large facility on the south side of Otemae Park, south of Himeji Castle, with a rooftop garden overlooking the castle on the 5th floor. There is also a restaurant where you can enjoy a view of Himeji Castle while you dine.

Many Japanese people look forward to cherry blossoms blooming around their neighborhoods, most of which are Somei-Yoshino trees.

But by learning about the tree's origins and characteristics, and visiting cherry blossom viewing spots, you can enjoy these beautiful trees even more! Enjoy watching the cherry trees as they transform through all their phases, from when they blossom, to when they're in full bloom, to the moment they've all scattered.

*Cherry blossom flowering times vary each year.
*Event dates and activities subject to change. Please be sure to avoid crowds and take proper precautions against infection when going out.

10 Exotic Types of Japanese Cherry Blossom Trees You'll Fall in Love With
3 Best Hotels to Stay in Tokyo During Cherry Blossom Season
*This information is from the time of this article's publication.
*Prices and options mentioned are subject to change.
*Unless stated otherwise, all prices include tax.