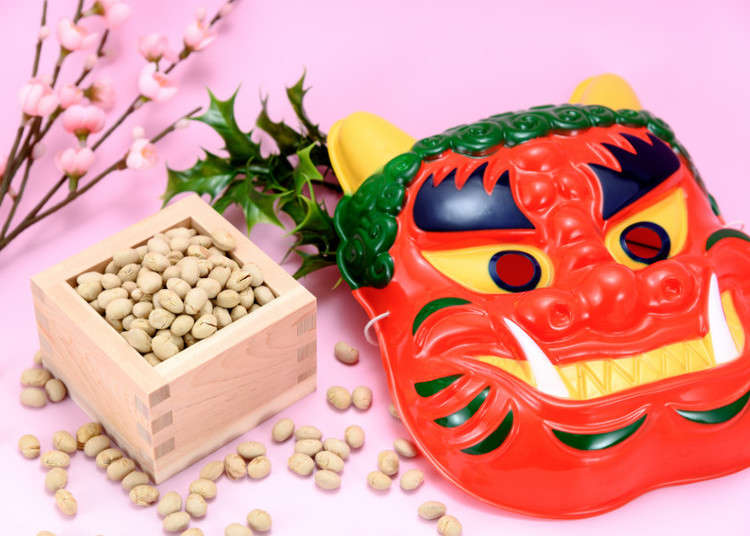 Each year, February 3rd, the celebration known as Setsubun takes place across Japan. This celebration, literally meaning “seasonal division,” marks the end of winter and the beginning of spring, which is formally known as ‘risshun,’ according to the traditional calendar used in Japan many years ago.

While there are technically four such seasonal divisions that take place in a year, the one in February is the one most associated with the word “setsubun.”

Through lively rituals that include chasing away symbolic demons, eating special sushi, and scattering soybeans, the evils of the previous year are believed to be driven out, as fortune is welcomed in–traditions which are unique to the Setsubun of this particular season. 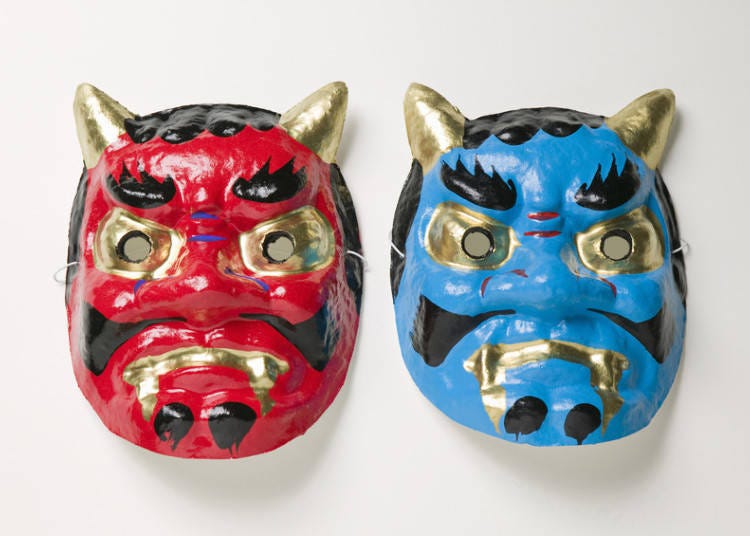 Even though it technically takes place during the winter, Setsubun is considered a part of the Spring Festival, called ‘haru matsuri.’

In Japan, a great deal of cleaning needs to be done before and during the period one greets the coming year, be it physically by cleaning one's own home, or spiritually by visiting a shrine or temple (a custom called hatsumode).

Cleaning and purification are important aspects of how people celebrate the New Year, and Setsubun is the final act of preparation before spring finally ends the New Year's celebrations.

Driving Away Demons with Beans

In keeping in line with other traditions that are practiced around this time of year, the purpose of celebrating Setsubun is also one of cleaning and purification. The day is used to drive demons and evil spirits out of one's home with the help of roasted soybeans. These beans are known as ‘fuku-mame,’ meaning "lucky beans," as they are supposed to be a tool that rids the home of evil and invites fortune in.

Traditionally, either the oldest male member of the family, whose zodiac sign is the same as the coming year, or just the male head of the household, dresses up as an oni, which is a kind of demon or ogre in Japanese folklore.

The other members of the family then throw the roasted soybeans (sometimes peanuts) at the ‘oni’ to drive it out of the home by chanting: “Oni wa soto! Fuku wa uchi!” This chant translates to "Demons out! Fortune in!" and represents the act of cleaning one's home from any evil or harmful spirits.

However, there are some temples, shrines, and regions where the phrase “Oni wa soto” is not spoken. For example, at Sensoji in Asakusa, it is believed that oni do not appear before the temple’s enshrined deity Kannon, and as such, the chant is unnecessary. Instead, the phrase “Senshu banzai fuku wa uchi!” is recited, meaning “Long life and good fortune, come in!” 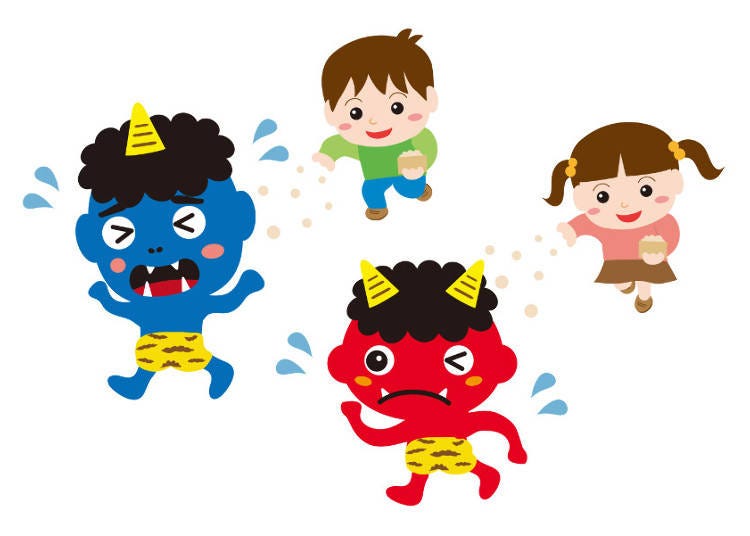 The way to scatter the beans is as follows: First, roasted soybeans are placed in a bowl and offered before the household shrine. If a household has no such shrine, the beans are offered in a location that is higher than eye-level.

In the evening, windows are opened and the phrase “Oni wa soto” is recited while facing out of the house and scattering the beans twice. Immediately after, the windows are to be closed while reciting “Fuku wa uchi” twice and scattering beans in the middle of the room two times.

This ritual is performed starting from the inner most room of the house, with the last area being the entrance. When scattering beans, the palm of the hand should be facing upwards.

Because it represents a prayer for a bountiful harvest and thus mimics the gesture of sowing seeds on a field, the beans should not be scattered by using an overthrow. 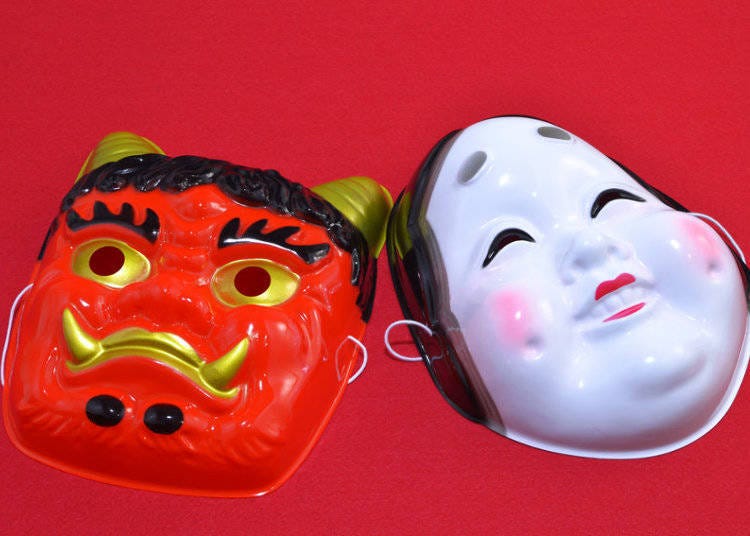 In addition to the oni mask that is being worn during Setsubun, those who throw the beans often don the face of the deity Okame. She is the kami of luck, good fortune and kindness, portrayed with a white friendly face, with chubby cheeks, and a warm smile. She acts as the defender against misfortune, scaring off oni and other wicked creatures with the help of the soybeans. 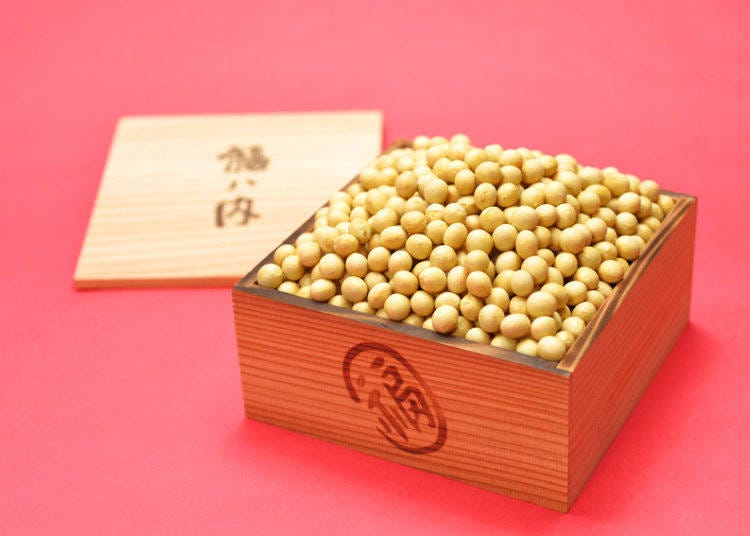 While the beans are usually thrown directly at the oni, they are also scattered around and in front of one's home, to make sure to scare away any demons in hiding.

The chanting may vary; sometimes "oni wa soto!" is only shouted when scattering beans outside, and the counterpart "fuku wa uchi!" when taking care of the interior of one's home.

Afterwards, people often eat the number of roasted soybeans that corresponds to their current age - plus one more - in order to make the coming year an especially lucky one. 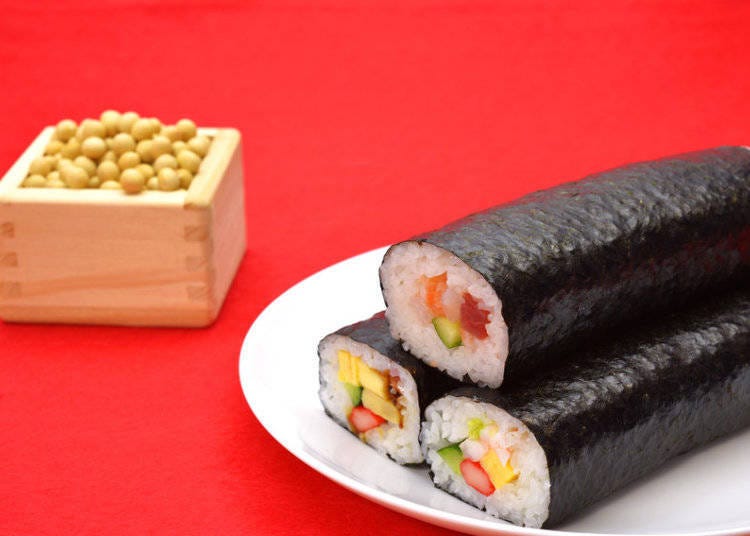 It is also customary to eat a type of sushi roll (makizushi) called eho-maki. Though makizushi is usually cut into pieces for convenient eating, eho-maki is kept as one long roll.

The exact meaning of the word eho-maki translates to “lucky direction roll,” as it is said that eating these in complete silence, while facing the lucky direction of the given year, will bring good luck in the coming year.

Each eho-maki is filled with seven ingredients, as seven is considered one of the luckiest numbers in Japan.

This custom originates in the Kansai region, specifically from around the area of Osaka, but it has become popular in many parts of Japan. At the beginning of February, these uncut, fat maki rolls can be found in supermarkets, convenience stores, and sushi restaurants as a part of Setsubun celebrations.

What is Ehomaki? Introducing the Lucky Direction for Setsubun 2021, and Where to Buy It! 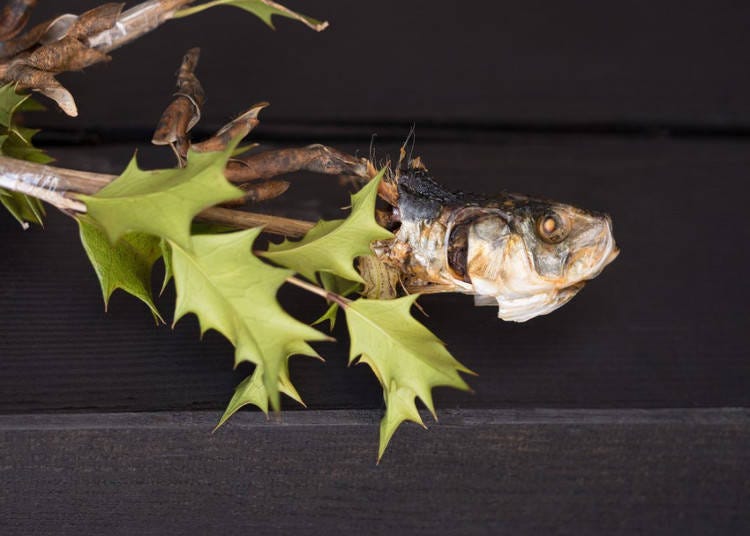 There is one traditional Setsubun custom, however, that fell out of fashion with time. A decoration made from cooked sardine heads and holly tree leaves, called ‘hiiragi iwashi,’ was placed by the entrance to one's house. It is said that demons have an aversion to the smell of sardines, so this peculiar decoration was used to keep demons from entering the home, acting as an additional protection against bad luck for the upcoming year. Today, hiiragi iwashi has become relatively rare, but can sometimes still be spotted at the front doors of Japanese houses around the beginning of February, particularly in certain regions.

Celebrating Setsubun in a Variety of Ways 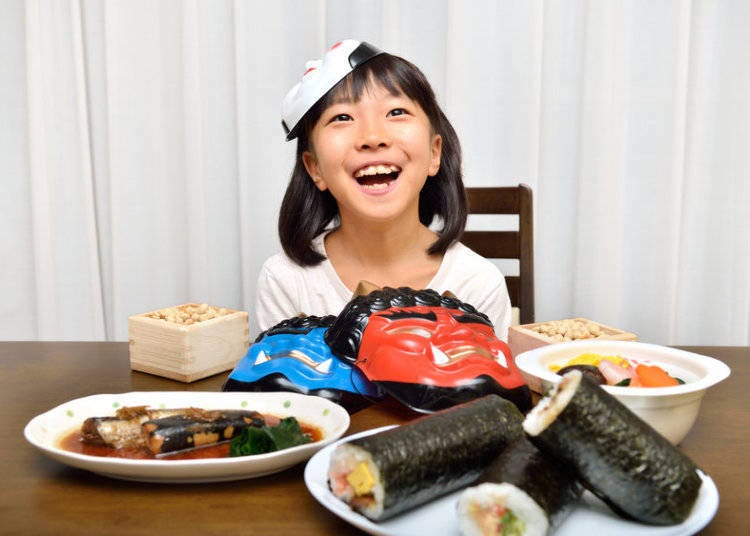 Temples and shrines all over Japan celebrate Setsubun as well. Many celebrations feature people dressed up as demons, the bean-throwing performed by both the priests of the location, as well as guests.

In addition to throwing the roasted soybeans, temple and shrine celebrations include the throwing of small gifts such as envelopes with money or a variety of sweets and candy. Some of these events are so popular that they are broadcast on local and national TV programs.

Whether at home or at a temple, Setsubun heralds spring in a very unique way. While the customs may differ depending on the region, demons and ogres all around the country are being chased out of homes and off grounds on the 3rd of February - why not throw a handful of roasted soybeans for yourself this year and take care of your good fortune?

Setsubun - Japan’s Seasonal Celebration and Why it Only Happens Once a Year
*This information is from the time of this article's publication.
*Prices and options mentioned are subject to change.
*Unless stated otherwise, all prices include tax.