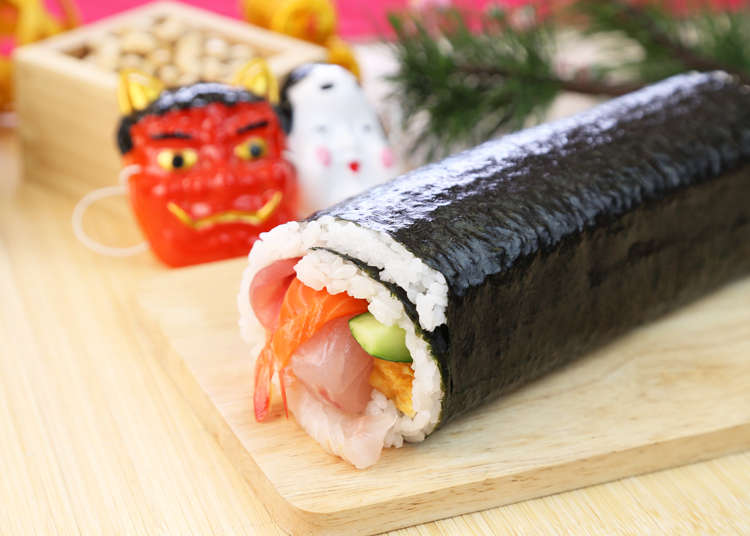 Demons beware: every year on February 3, Japan gets ready to drive out demons and devils with roasted soybeans in a tradition called Setsubun. This bean-throwing is done at home, in offices, and in shrines and temples around the country, and so-called Eho-maki, sushi rolls, are eaten while facing the lucky cardinal direction of the year. Setsbun, literally meaning “seasonal division,” is a tradition from Old Japan, passed and carried on for numerous generations, and there’s no one in the country who doesn’t know what it is.

But when examining the traditional festival of Setsubun a bit closer, you’ll notice that it actually does not only take place once a year. No Japanese person is throwing the beans on any other day than February 3rd – why is that? Let’s find out what’s behind the beans and demons and find out what Setsubun is all about.

・Is it true that Setsubun takes place four times a year?
・And if that's the case, why is it celebrated only in February?
・Why did people start throwing beans?
・And when did this bean-throwing custom begin?
・What do non-Japanese people think about Setsubun?

So, Setsubun Happens not Once but Four Times? 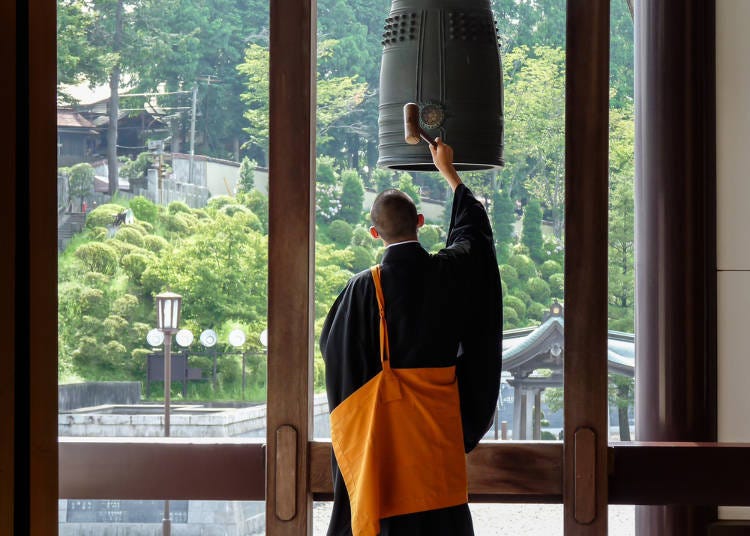 Being the “seasonal division,” it would make sense that Setsubun actually takes place with every passing season. Let’s take a look at what the Nihon Kokugo Daijiten, the Cambridge Dictionary of the Japanese language, so to say, has to say about the traditional custom:

“The turn of the season. The day that separates each season. Refers to the day before the first day of spring, summer, autumn, and winter. Sechibu. Sechibun.”

So yes, Setsubun actually does happen four times every year, before the beginning of spring around February 4, before summer around May 6, before autumn around August 8th, and before winter around November 8. The term Setsubun, or seasonal division, suddenly makes a lot more sense.

But why is Setsubun only Celebrated in February? 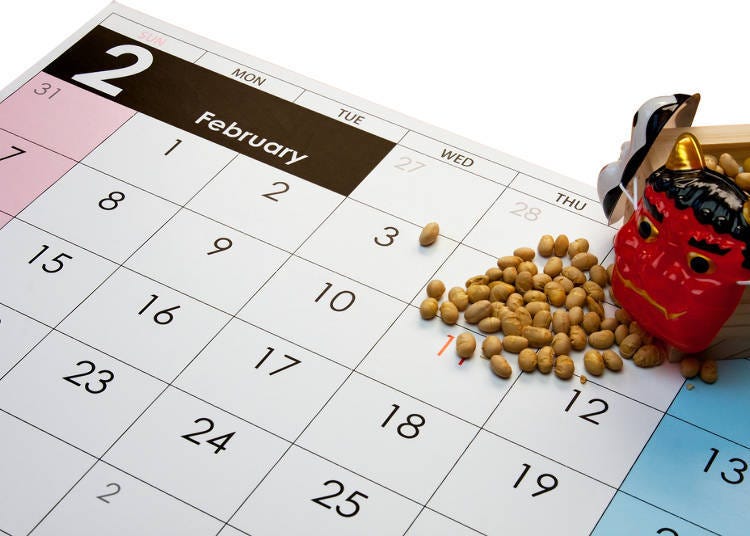 As such, one would expect that Setsubun is celebrated more than once a year – how come spring is more important than the other seasons in that regard? The entry in the Nihon Kokugo Daijiten continues as follows:

“Especially the day before the beginning of spring. Among the four seasons, the time when winter turns to spring is also seen as the end of one year, and similar year-end festivities take place.”

The dictionary says “especially” but it doesn’t explain why the festival of Setsubun is only held before spring. Other dictionaries are equally vague on this issue, giving many an explanation as to what Setsubun is but never really pinpointing why it came to be held in February.

What about Setsubun’s Beans, though? 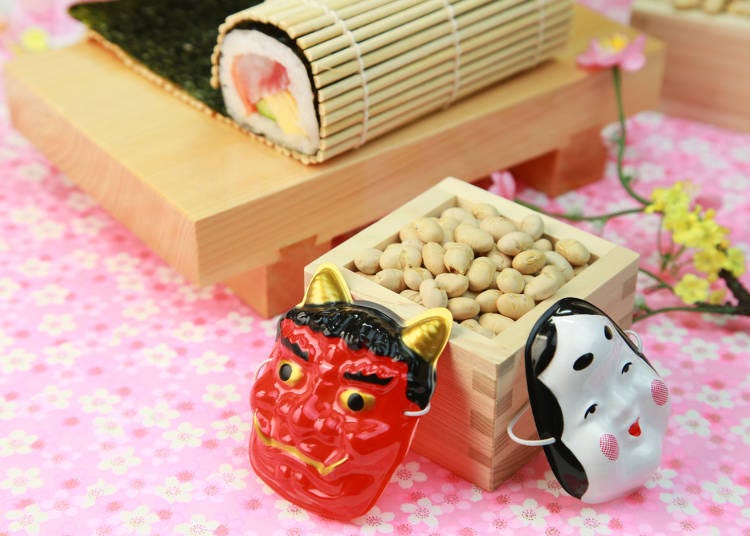 Mamemaki refers to the throwing of roasted soybeans and is the most prominent characteristic of the Setsubun festival. But how did this custom come to be?

Looking into the matter, you will find one prominent theory saying that the Japanese word for bean, “mame,” was written with the characters for “demon” and “die.” So the whole “defeating demons with beans” is actually a play on words by the Japanese of old! In certain areas of Japan, however, a meal is offered and a bed is prepared the night before Setsubun for the demons, as they are actually seen as the bringers of luck and blessings. The soybeans then act as an offering rather than a weapon, according to the Sanseido Dictionary of Annual Festivities.

When did People Start Throwing Beans for Setsubun? 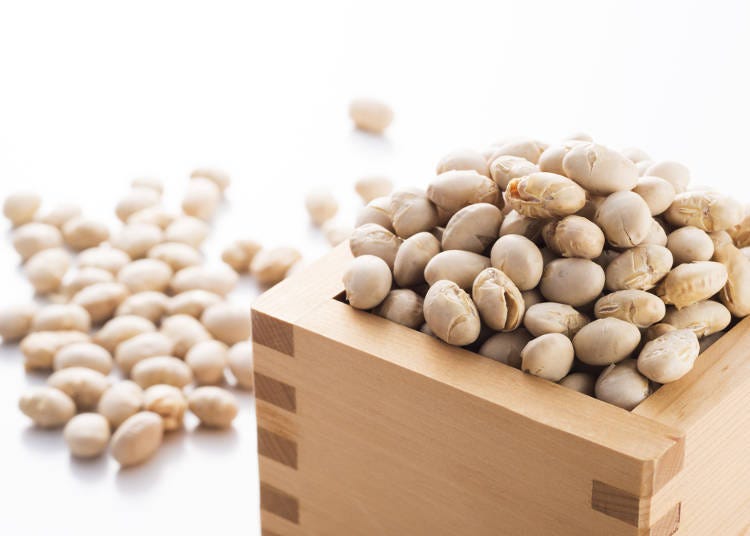 Having learned the background of Setsubun’s roasted soybeans, let’s find out when this custom actually started.

The Kokushi Daijiten dictionary has the following to say about it:
“In the night of Setsubun, a ceremony called tsuina is being held to drive out demons and welcome deities.”
According to the same dictionary, tsuina was part of the New Year’s festivities of the imperial court. This ritual has its origins in China – an artist called a hososhi wears a four-eyed demon mask and is equipped with a shield and a halberd, who is then driven out by priests. This is the origin of Setsubun’s mamemaki tradition.

“Over time, tsuina and setsubun have been combined into one” says the dictionary furthermore – the result of this being us throwing beans to drive out demons on February 3rd nowadays.

Demons and Beans – What Do Non-Japanese Make of This? 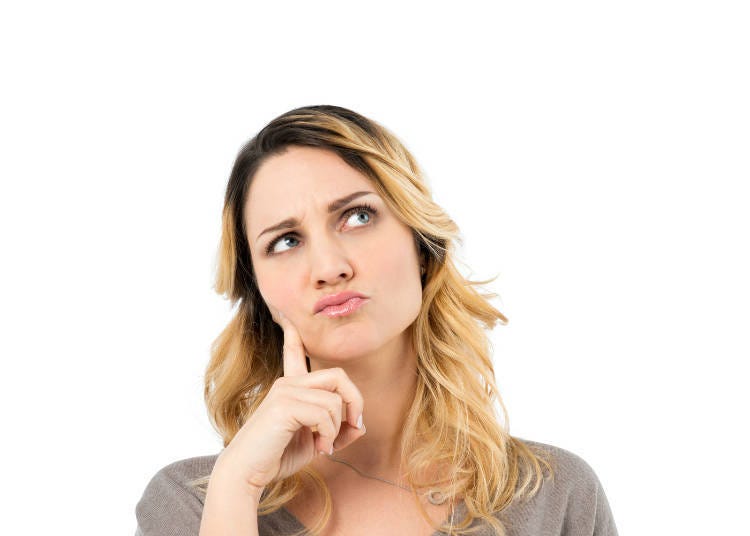 As an old Japanese tradition, passed down by numerous generations and still celebrated vividly nowadays, what do Non-Japanese people think of all the bean-throwing and demon-fighting?

“When I first heard about Setsubun, I thought: ‘Wow, what a weird tradition.’ Getting rid of a demon by throwing beans at it seems strange. In the States, I think demons are mainly thought of as scary as they basically equal the Devil. Demons in Japanese stories and tales, though, resemble ordinary people and seem somewhat childish.” (Man from the United States in his 30s)

Certainly, a demon that flees when being hit with beans doesn’t seem very scary, does it? Then again, there was also this opinion:

“Similar creatures appear in myths and stories from Europe of the Middle Ages, so I don’t think it’s weird or unusual. Vampires, for example, are said to be repelled with garlic, so why shouldn’t demons be weak to beans? It’s the same for Halloween. Also, it is said that the fireworks on New Year’s Eve were originally held to scare away evil spirits and the likes. I think pretty much every culture has such a ‘driving out the demons’ custom.” (Woman from Germany in her 20s)

Setsubun – the New Year’s Eve of the lunar calendar. Grab a handful of beans and sprinkle some yourself, getting rid of any demons and inviting in a whole lot of luck for the year to come!

Where to see Setsubun?

Although the ritual takes place at many shrines and temples around town, below are some of the more intriguing places to see some good beaning (and to get fun video as well)! At these main locations, do expect crowds - and arrive early to get the best spot!

Bear in mind that some temples will have split sessions, with ceremonies held in the early and then again in the late afternoon. If you wish to throw some beans yourself, there is likely a registration period beginning an hour or two ahead of the tossing times listed below when you can get a bag of your own!

With hundreds in attendance, Setsubun at Kawasaki Daishi is quite special! If you're staying in the Yokohama area and feel Tokyo might be a bit of a trek, it's worth a go. Bean-throwing begins at 11:30.

Kanda Shrine has a long history of being associated with Setsubun, and this year's events will start from 2:00 pm.

Last on our list is a tad out of the way - being 40 minutes west of Shinjuku - but if you're a Hello Kitty fan, you're in for a treat: she joins in the bean-throwing fun there every year! Events will be held at 10AM, 11AM, 1PM, 3PM and 4PM.