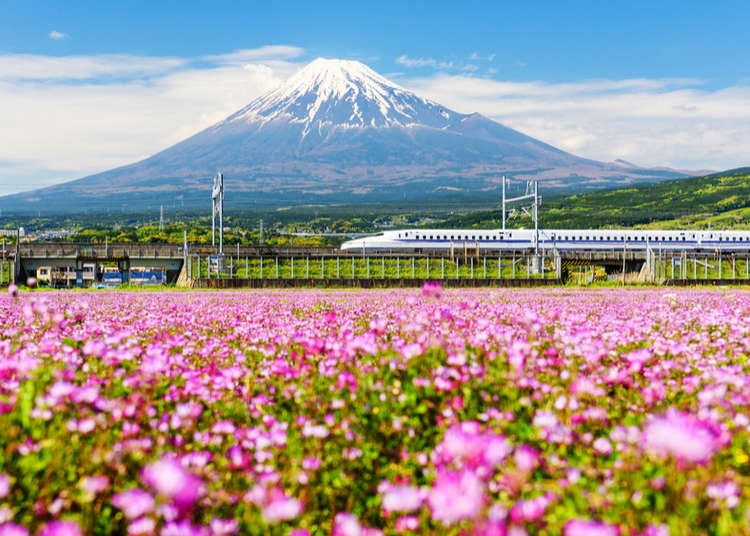 May is Japan's climatological "goldilocks" zone. The weather is hot enough to feel like early summer and the rainy season of June is yet to kick in. It's also a special time for the Japanese (and the local expats) as <@Golden Week|a=article:a0001004 arrives during the first week of May@>, giving everyone some much-needed rest after a busy start to the calendar year.

Add to that, a host of new festivals, a sweet spot for trying new activities and seasonal foods, the arrival of May's distinct flora and Tokyo's Sumo season and we've got an action-packed month ahead of us. Here are the top 10 things to do in Japan in May!

1. Snap photos and enjoy the scenery at parks and flower gardens 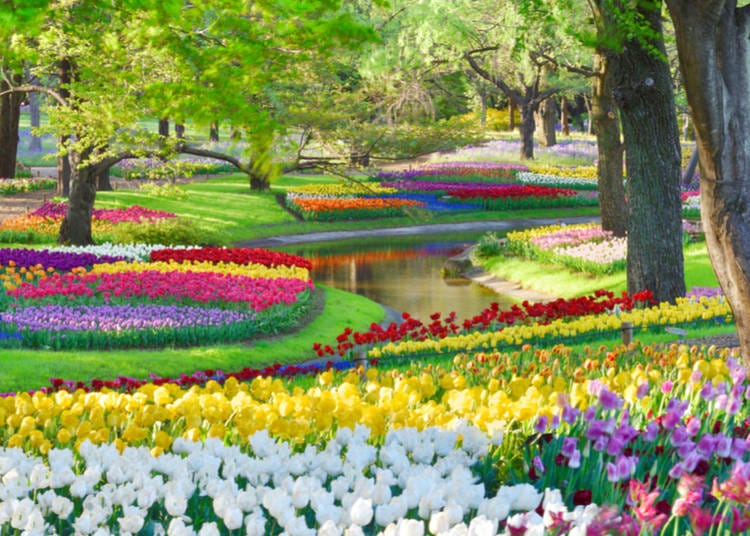 It's the perfect time of year for a walk amongst Japan's serene nature. The aromas and visuals brought by the budding May flora is a huge draw for tourists. We've got a few recommendations for parks and gardens around the Tokyo area that should top your to-do list:

1. Showa Memorial Park – Tulips
The Showa Memorial Park is particularly renowned for the sprawling pastures of multi-colored tulips that descend upon the park every May. The tulips are joined by host of other blossoming flowers, offering up a spectrum of natural hues to combine with the distinct smells of spring. This year the annual flower festival runs from late March through May 27th.

2. Kyu-Furukawa Gardens - Roses
Roses don't hold the same cultural significance as many other Japanese flowers, yet the Kyu-Furukawa Teien garden near Komagome station in the city's north, has them in beautiful abundance. Night time illuminations take place here from May 10th through May 19th.

3. Mount Fuji Shibazakura Festival – Pink Moss Phlox
The shibazakura festival takes place in the rolling countryside that rests by the foot of looming Mount Fuji. They are not unlike carpets of cherry blossoms that sprout from the soil underfoot. If you want to see the shibazakura in all their blooming glory, they you can do so from April until May 26th this year. Details at http://www.shibazakura.jp/eng/. 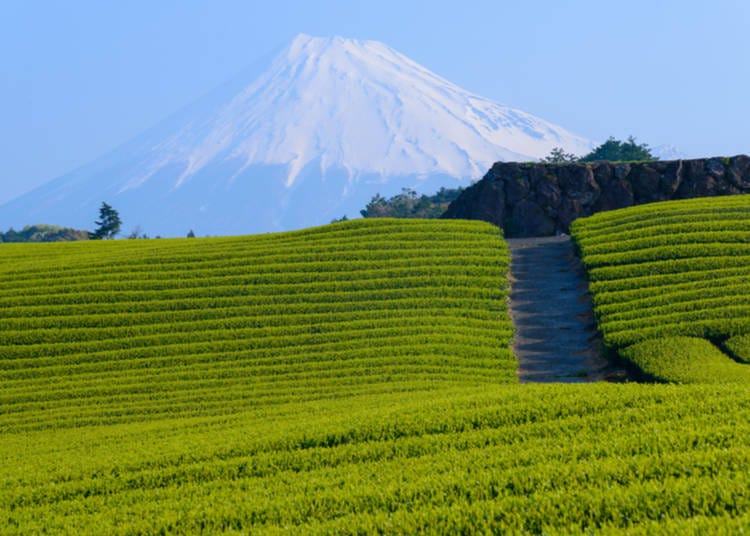 Sticking with Japan's most famous national treasure, we have the green tea plantations of the Mount Fuji foothills. The tea leaves are typically harvested sometime in May, so the window of opportunity is rather small. Early mornings at the beginning of May provide the best time to set your eyes upon these isolated vistas of emerald green. The plantations are only a couple of hours from Tokyo and closer by half to the town of Hakone—another popular tourist hangout.

3. Catch one of the May festivals 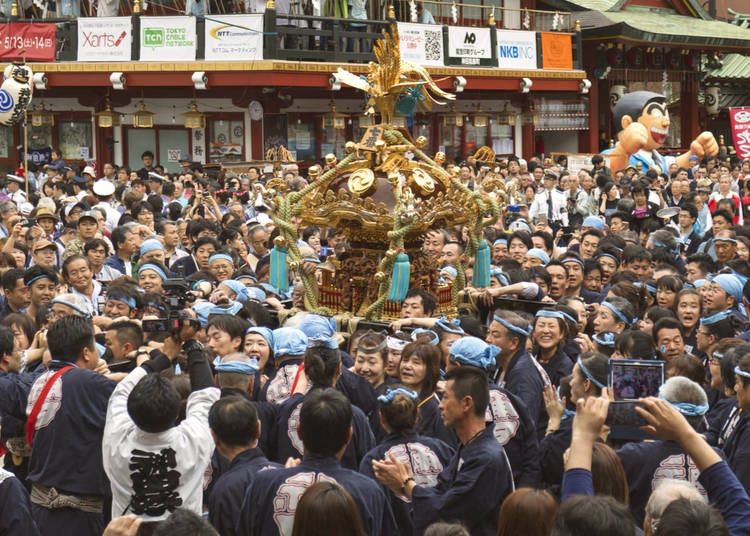 The spring season is filled with cultural celebrations and May is at the epicentre of the party. With so many festivals across the nation you're pretty spoilt for choice, but there a couple in the Tokyo area in particular which are just too good to be missed in 2021.

1. Kanda Matsuri – May 6th – 10th 2021
The biannual Kanda Matsuri festival takes to the streets of eastern Tokyo on May 9th this year. It involves impressive parades with giant floats, priests clad in period-style costumes on horseback, elaborate dancers and skilled musicians.

2. Sanja Matsuri – May 21-23
The Sanja Matsuri takes place in Asakusa, the district which houses Tokyo's oldest temple, Senso-ji. Traditional-themed parades are the order of the day again, with geisha, musicians and dancing troupes all coming to the fore.

Seeing The Sanja Matsuri - One of Tokyo’s Most Famous Festivals

4. Get frosty at the Tateyama Kurobe Alpine Route 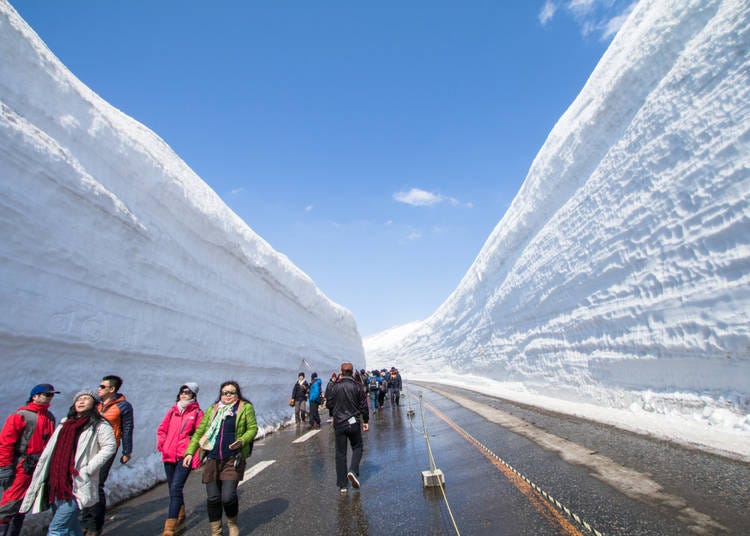 Honshu's Tateyama Kurobe Alpine Route is one of May's top tourist activities, year in year out, particularly if you want to veer off Japan's "Golden Route". It will give you a unique sense of the scale of the nation's vast and mountainous wilderness. Running through the Northern Japanese Alps from Toyama to Nagano, the Alpine route is typically traversed using a variety of different vehicles, including bus, cable car and ropeway.

Tateyama holds a place of historical significance as one of Japan's three sacred mountains and, more recently, it has been dubbed the "Roof of Japan". It is renowned for its walls of ice and snow which cushion the roads snaking through the mountain. Following May, said walls begin to thaw and melt, so next month is arguably peak season for the Kurobe Alpine Route! 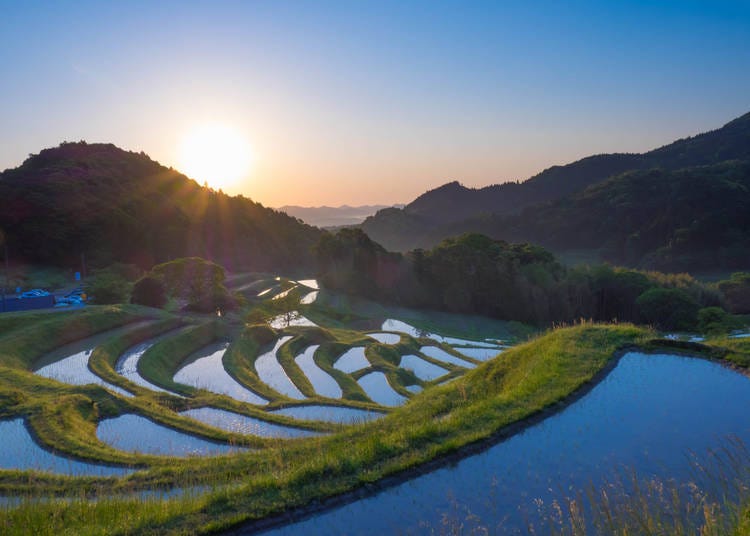 Recent figures suggest that the average Japanese person consumes 55kg of rice per person per year. So it's fairly safe to make the claim that they absolutely love the stuff. As a result, the rice paddies of Japan are indeed plentiful and, more often than not, there are equally picturesque.

Once you venture into the rural reaches of the country, where the soil underfoot is commensurate with perfect growing conditions, you are often greeted with exceptional vistas of mirrored water sitting atop layered fields of rice growing paddies. Famous areas include Niigata, Fukushima, and the Noto Peninsula. Closer to Tokyo include Chichibu and around Chiba Prefecture, where you can catch a glimpse of these gorgeous landscapes. 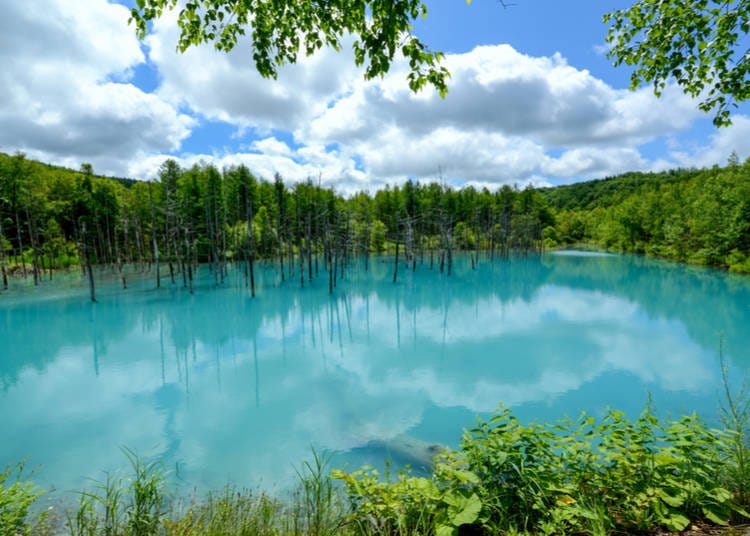 In May, the rising temperature up north opens up some new activities for the spring and summer season. As Hokkaido's snow disappears it unleashes some delightful patches of scenic wilderness around the country's largest prefecture.

Hokkaido's famous "blue pond" in Biei is said to be at its best in May. On a clear day the pond takes on a fairy-tale-like quality with thin-stalked trees rising up from the glassy, turquoise waters. In spite of its popularity, the surrounding areas are still imbued with the ever-present sense of isolation for which Hokkaido's nature reserves are so acclaimed.

Otaru is a quaint port-town neighbouring the prefecture capital, Sapporo. In May you'll be able to take a boat ride along the town's canal, visit local sake brewers and eat some fresh Pacific Ocean produce from the local fish market.

You can also still catch the cherry blossoms up north at this time of year. Full bloom in Hokkaido is expected to last from May 2nd through May 9th 2021! 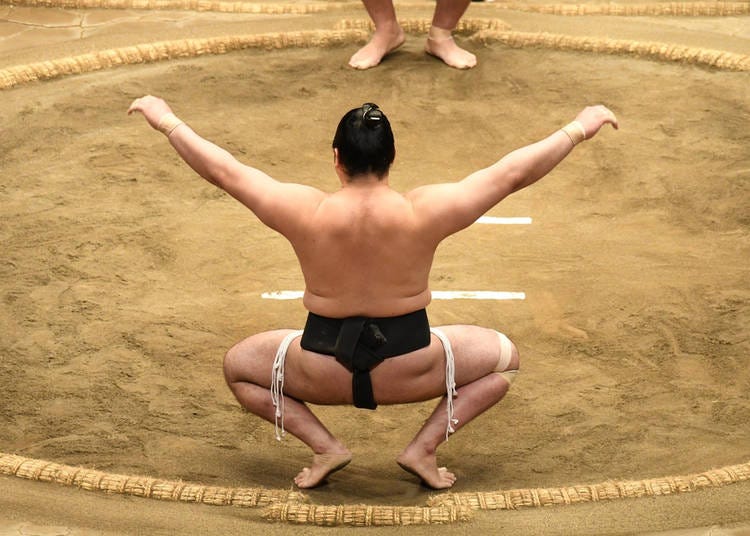 Sumo is the national sport of Japan. A sport which is claimed to have been handed down to the denizens of the nation by the Shinto Gods themselves. Watching sumo is a cultural masterclass, fusing various elements of Japanese tradition into one unique experience.

The sumo season is sporadic both in its timing and location, but every May it makes a welcome return to Tokyo. There's a reason it's a bucket-list activity for many Japanophiles, so if you've got the time, be sure to check it out. 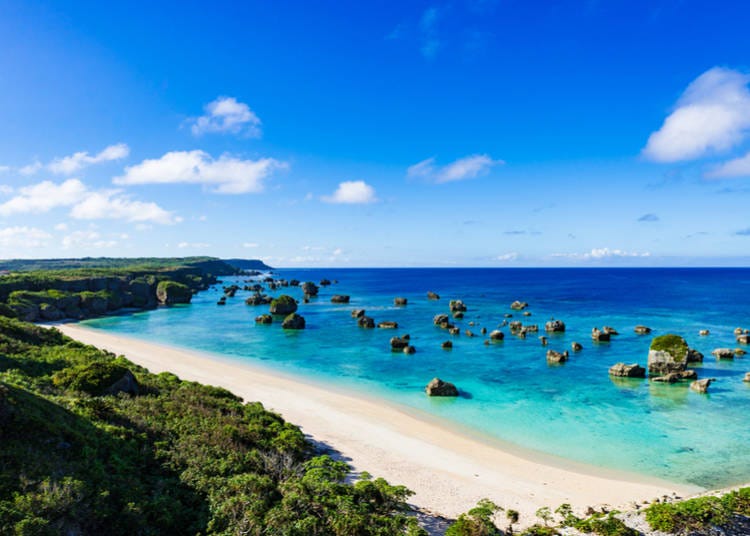 Particularly down south, the waters around the Japanese coastline become warm enough for a dip in May. On the tropical island of Okinawa, and in the neighbouring archipelagos, there are tons of beaches depending on what takes your fancy. Isolated? Well-provisioned? Near the cities? Accessible by public transport? Big waves? There's a beach (or several) to fit every kind of traveller.
Further up the country around Japan's main islands, the waters will be warmer as well. Coastal areas of Honshu like Zushi, Chiba and Izu will also start to become more popular with bathers as the month of May goes on.

Slice of Paradise! 10 Serene Beaches In And Around Tokyo 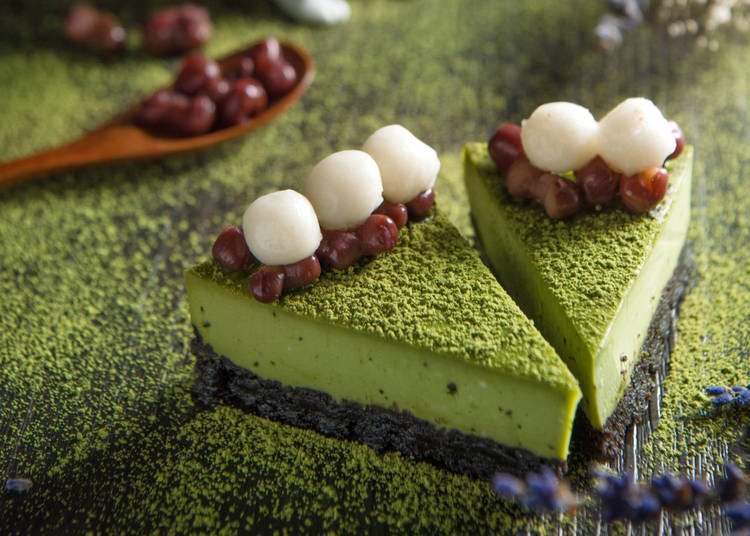 May is green tea season in Japan, which naturally results in a range of matcha inspired products. There are even hotels and restaurants which put on match-themed dessert buffets throughout May, utilising various different strands of the green tea leaf from nearly every prefecture under the rising sun. 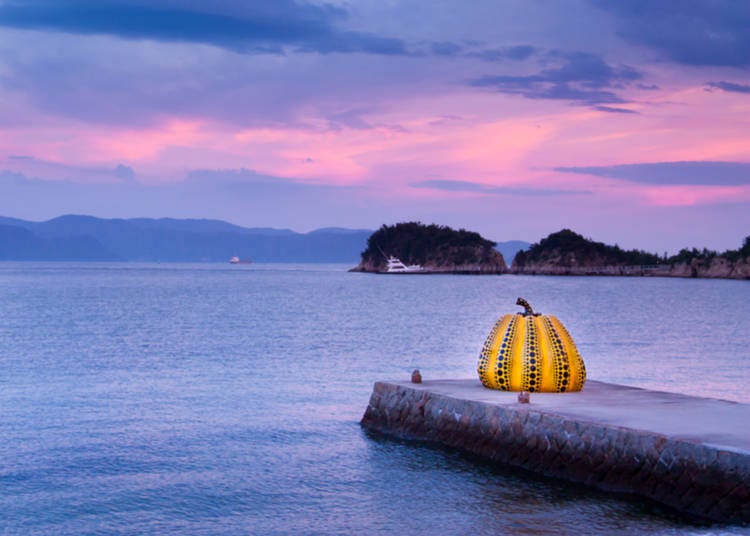 Naoshima Art Island is like an open-air museum of contemporary and alternative art located in the still waters of Japan's Seto Inland Sea. It’s a fusion of the natural environment with sculptural and architectural creations by some of the nation's finest artists. It's a great way to veer of the more trodden paths of Japan's standard tourist routes, and to get a unique insight into the quirky and distinct styles of some Japan's visual art virtuosos.

How to Survive the Crowds during Japan's Golden Week
Kodomo no Hi: Children's Day in Japan
Golden Week: Japan’s Shining Spring Holidays
Browse & Book Amazing Experiences in Tokyo
*This information is from the time of this article's publication.
*Prices and options mentioned are subject to change.
*Unless stated otherwise, all prices include tax.