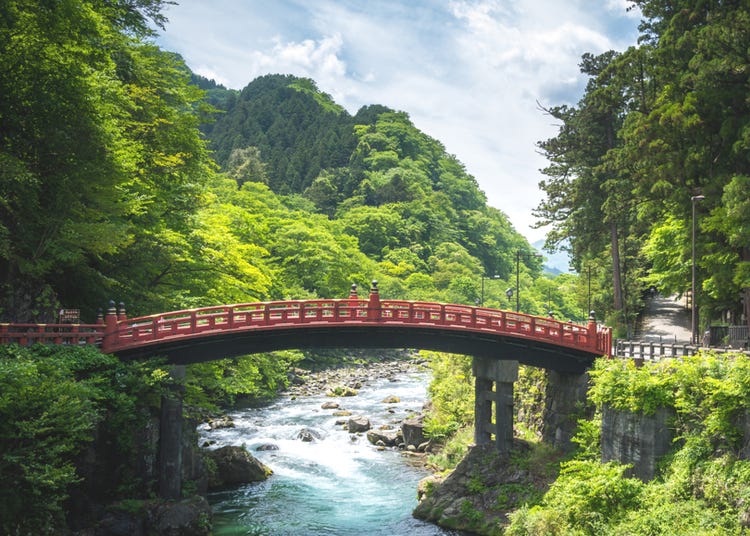 Have you ever heard of Nikko? It's a major tourist area in the Kanto region located in northwest Tochigi Prefecture that's a short two hours train ride away from Tokyo.

This is where places of interest such as UNESCO World Heritage Site Nikkō Tōshō-gū and Fukuroda Falls, one of the three great waterfalls of Japan, can be found. There's also the Irohazaka - a winding road that was practically made for autumn leaves viewing, a popular activity many will be engaging in for the upcoming autumn season!

And there's more! Lake Chūzenji is a tranquil and scenic place that will soothe your frayed senses, and if that's not enough, you can always soak your troubles away in one of the Kanto area's foremost hot springs - Kinugawa Onsen.

Nikko is an area you'll love to visit, whether alone or in a group; it has practically everything you need for a fun-filled trip, and everyone can enjoy it regardless of their age.

To kickstart your itinerary, we'll be giving you a quick introduction to Nikko in this guide, along with a collection of must-visit hotspots in the area for your consideration!

Fascinating places to visit all-year round, whether your interest is in history, culture, or nature! 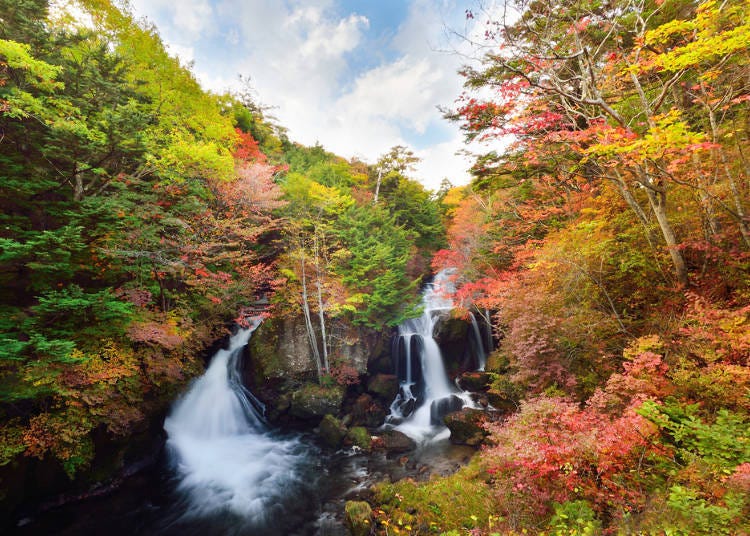 As mentioned at the outset, Nikko is in the northwestern area of Tochigi Prefecture, located in the northern side of the Kanto region. It is the third-largest city among the municipalities of Japan.

Besides the UNESCO World Heritage Site, Shrines, and Temples of Nikko, the area is home to plenty of other places of worship of immense historical and cultural value.

Needless to say, these temples and shrines are also popular among many as "power spots," or places of spiritual energy. For those who are into natural sights, there's always the lush and beautiful Mount Nantai and Lake Chūzenji, just to name a couple.

Because these nature spots remake themselves every season, more than 12 million captivated visitors journey there to enjoy the sights throughout the year! The local specialty food called "Yuba" is a tasty tofu dish made using Nikko's pure and plentiful groundwater.

And don't forget the hot springs! It's really no wonder many worldwide know Nikko as a great place to fully immerse themselves in the Japanese charm! 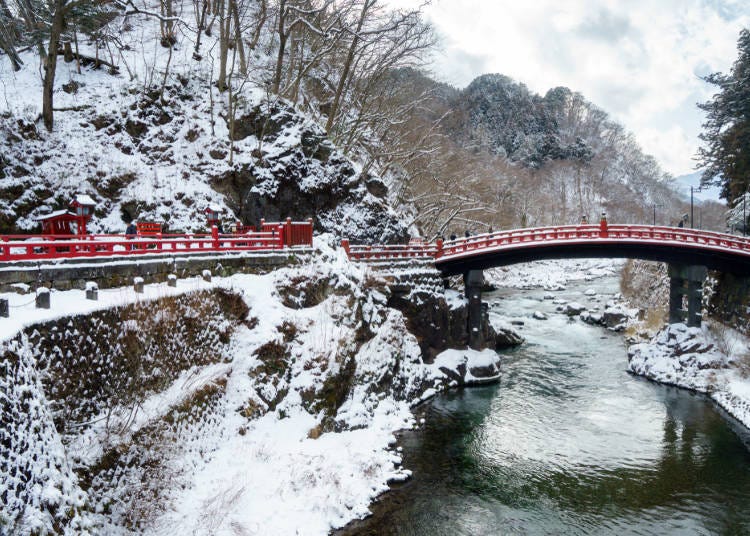 Because of that, it may be best to bring along clothing that is easy to slip on and off to keep your body at optimal temperature for the most enjoyable experience!

That said, this rapid fluctuation in temperature is part of the reason why Nikko has such charming natural scenery, no matter the season. Take, for example, the beautiful fall leaves that paint the landscape in warm red hues during autumn.

It's one of Nikko's must-see sights if you're visiting at the right season! During winter, there are hot springs in the area known as yukimi onsen (snow viewing hot springs) that allow you to admire the glistening snow as you soak.

How about marveling at an amazing icefall - basically the icicle version of a waterfall? For those wanting to stay closer to urban areas, visit the exotic Oku Nikko Snow Festival for beautifully crafted ice sculptures and the staple of every major Japanese festival: Fireworks!

If you're going there from central Tokyo, however, you'll have to change trains quite several times on the JR Lines, so it may be easier for tourists who are unfamiliar with the train lines to aim for the Tobu-Nikko Station instead.

Each region of Nikko covers quite an extensive area. Fortunately for visitors, the buses here - which includes free buses! - will take you to all the tourist hotspots you can think of. Buses will depart from both JR and Tobu Railway train stations, so don't worry about not knowing where to find them!

From Asakusa
・Tobu Railway Limited Express Spacia will take you directly to Tobu-Nikko Station in about two hours.

Along Kinugawa Valley is Kanto's foremost hot spring area, decked with hotels and traditional Japanese inns known as ryokan. When the area was first discovered during the Edo era (1603 CE to 1868 CE), only a select few, such as daimyo (feudal lords) and Buddhist monks, were allowed to step foot onto it.

Although historically prestigious, it is now open to all and can be accessed by train (Tobu-Nikko Line) or bus. You'll also find distinctive theme parks such as the Tobu World Square and Edo Wonderland Nikko Edomura in the vicinity.

For a chance at a scenic landscape photograph, ride the Kinugawa Ropeway and be enchanted by the sights outside! This is also a great activity for families with children to enjoy together.

Along Kinugawa Valley is Kanto's foremost hot spring area, decked with hotels and traditional Japanese inns known as ryokan. When the area was first discovered during the Edo era (1603 CE to 1868 CE), only a select few such as daimyo (feudal lords) and Buddhist monks were allowed to step foot onto it.

Although historically prestigious, it is now open to all and can be accessed by train (Tobu-Nikko Line) or bus. You'll also find distinctive theme parks such as the Tobu World Square and Edo Wonderland Nikko Edomura in the vicinity.

For a chance at a scenic landscape photograph, ride the Kinugawa Ropeway and be enchanted by the sights outside! This is also a great activity for families with children to enjoy together.

Edo Wonderland: Top 6 Spots at Japan's Popular Theme Park - Be a Ninja or a Samurai For the Day!
Breathtaking Asaya Hotel: Indulge in the Japanese Hot Spring Heaven in Kinugawa Onsen

Oku Nikko is about an 80-minutes bus ride away from downtown Nikko, right at the end of the winding roads of Irohazaka, which is famous for its autumn views. Plenty of natural sights like mountains, lakes, waterfalls, and hot springs can be seen here, and the area stands at an elevation of 1,300 meters (about 4,265 feet).

At Lake Chūzenji, board a cruise ship or hop onto a kayak for some watery fun! To take in the beautiful sights of Lake Chūzenji and the surrounding mountains from a distance at your own leisure, you can't go wrong with the Akechidaira Observatory.

Kegon Falls is a waterfall where a jaw-dropping amount of water gushes out with ferocious intensity. Another waterfall you may be interested in visiting is Ryūzu Falls, a lovely place that has autumn views that can be said to rival those found along the Irohazaka's winding roads.

Then there's the Yudaki Falls, which measures 25 meters (about 82 feet) at its widest. Are you a hiker? You'll love the Senjōgahara hiking course that takes you through waterfalls, marshlands, and other spots of natural beauty!

Nikko in the eyes of the Japanese

Nikko started as a thriving hub of mountain worship in Japan. Eventually, when the Nikkō Tōshō-gū was built to enshrine Ieyasu Tokugawa, the first Shogun of the Tokugawa clan that ruled over Japan during the Edo period for 265 years - from 1603 CE to 1868 CE, many started coming to the mountain to visit this shrine as well, adding to the prosperity of the region.

Nikkō Tōshō-gū is part of the world-famous UNESCO World Heritage Site, Shrines, and Temples of Nikkō. Along with Nikko's charming natural landscapes, such as the Ryūzu Falls and Irohazaka, both well-known sites for autumn leaves viewing, it's no wonder the area is a popular spot for visitors seeking to get further in touch with their spirituality and the natural world.

Nikko in the eyes of foreigners

Nikko is an excellent place for sightseeing to many international visitors because of its deep ties to Japan's history, culture, and abundance of nature.

Because of the embassy villas here, many foreigners also see Nikko as a summer retreat. As a result, the place is rooted in Western culture, with hints of it showing up when you may least expect it.

Currently, about 100,000 foreigners visit or stay in Nikko every year. This number includes those who make day trips from Tokyo and those who stay in a hotel or inn to get the fullest and most relaxing hot spring area experience.

With the introduction of the Nikko Pass, a discount transport pass tailored for international visitors, making a trip down to Nikko is now more convenient than ever before and absolutely something to be seriously considered for your itinerary!

Book Now ▶ Nikko Pass (Asakusa Pick Up) - 2Days
*This information is from the time of this article's publication.
*Prices and options mentioned are subject to change.
*Unless stated otherwise, all prices include tax.