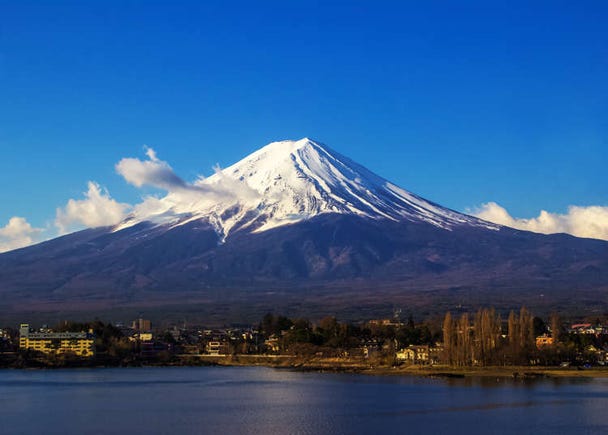 Even Japanese People Don’t Know That?! 11 Secrets About Mt. Fuji, the Symbol of Japan

Boasting the greatest height of domestic single peak mountains in the country, Mount Fuji is loved as a sightseeing attraction representative of Japan throughout the world. More than 300,000 mountaineers flock to it every year. In addition to being registered as a World Cultural Heritage in 2013, recent years have once more seen various features in the media seeking to express the allure of the mountain, further calling attention to it.

Now, we will reveal 10 of Mount Fuji’s unknown secrets, conquering the peak of this majestic symbol of Japan! 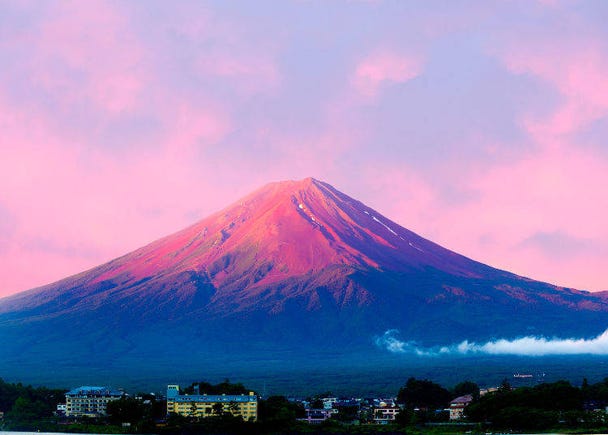 “Red Fuji” is a phenomenon that occurs during sunrise and sunset when the mountain shines in bright red.

Usually, Mount Fuji impresses with the contrast of the blue mountain range’s peak being covered in white snow. Under certain conditions, it changes its appearance to a crimson color of sublime beauty. The time between late summer and early autumn brings several factors together that make this possible, including clear air and altostratus clouds that reflect the red light. A rare phenomenon; “Red Fuji” is a seasonal word. Because the snow on Mt. Fuji’s peak begins to melt and exposes the reddish at the beginning of summer, the tinged sunlight emphasizes this and the mountain appears vividly red. The ukiyo-e artist Katsushika Hokusai’s famous work called “Fine Wind, Clear Morning” (gaifūkaisei) of the “Thirty-six Views of Mount Fuji” series is the reason why the “Red Fuji” became so famous.

Gaifū means southerly breeze; with the cirrocumulus clouds floating in the scenery of a blue sky, the drawing of the revered mountain’s crimson-dyed appearance boasts a spectacular impact.

Mount Fuji has various different appearances that change with time span and season. Apart from the Red Fuji, there are other rare sceneries of the mountain with curious names. 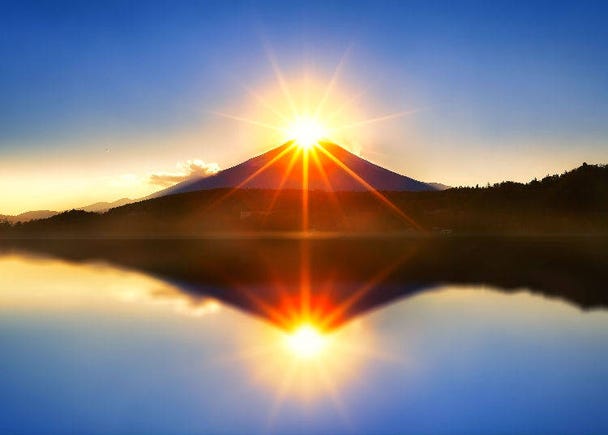 In the hours of both sunset and sunrise, there is a moment the view of the sun perfectly dancing on Mount Fuji’s summit. This looks just like a diamond and is thus called “Diamond Fuji.” The sun right over the mountain shines dazzlingly in a blazing light; this graceful scenery is a true masterpiece of nature! 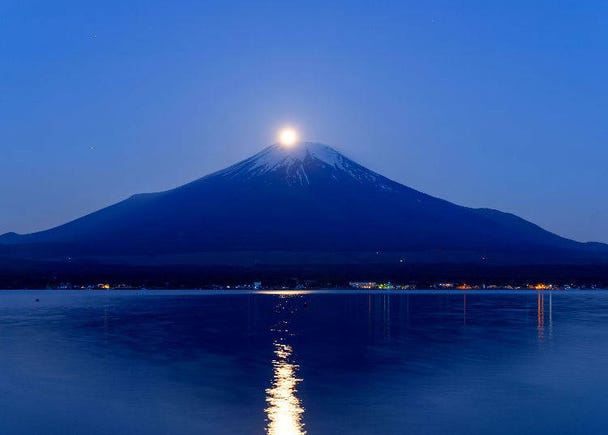 The full moon sitting on Mt. Fuji’s summit is called Pearl Fuji. Compared to the sparkling of the blazing light of Diamond Fuji’s sun, Peal Fuji’s soft light of the moon is of a gentle radiance – just like a pearl. This wondrous scenery that can be observed once a month truly leaves one stunned by its sheer beauty.

3. There Is More: Rare Mount Fuji That Doesn’t Appear Often! 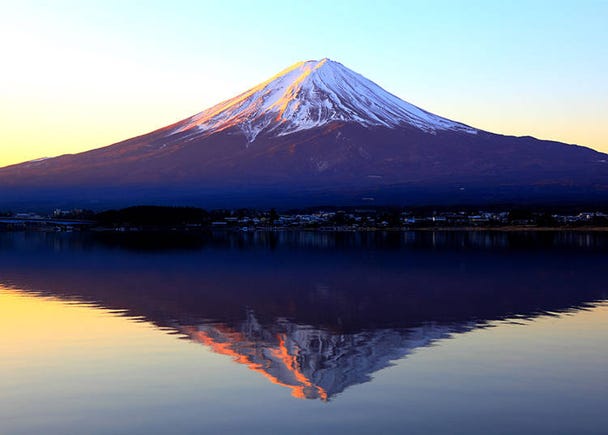 When Mount Fuji is reflected upside-down on the calm, waveless waters of alake, you see “Upside-down Fuji.” This can be seen on days with clear air and without any wind, allowing us to enjoy various different sceneries that change with the season. This is the upside-down image that is printed on the back of 1,000-yen bills! 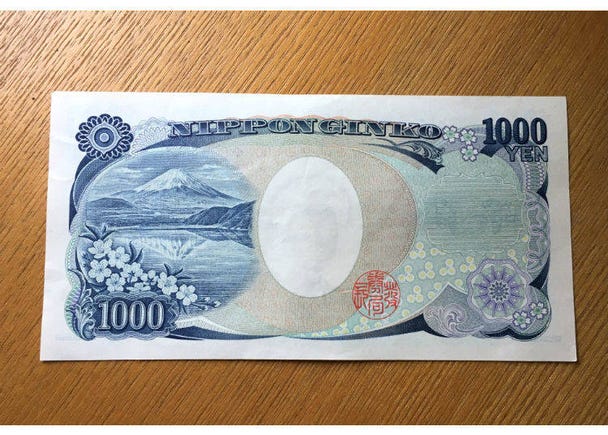 The backside of the 1,000-yen bill shows Mount Fuji Upside-down together with cherry blossoms. 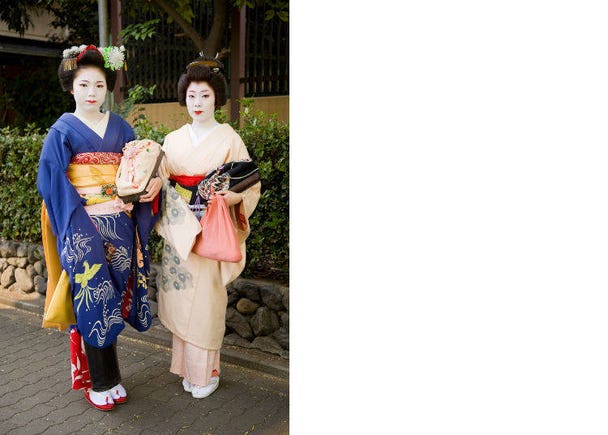 To think that Mt. Fuji is even found in places like this!
When one’s hairline creates an M-shape on the forehead it is referred to as “Fuji’s peak” in Japanese. In English, this is known as widow’s peak. It is one of the factors of beauty and can be seen on the foreheads of many women depicted in ukiyo-e and Japanese paintings.

5. Those Pictures on the Internet, Where Are Those Taken? 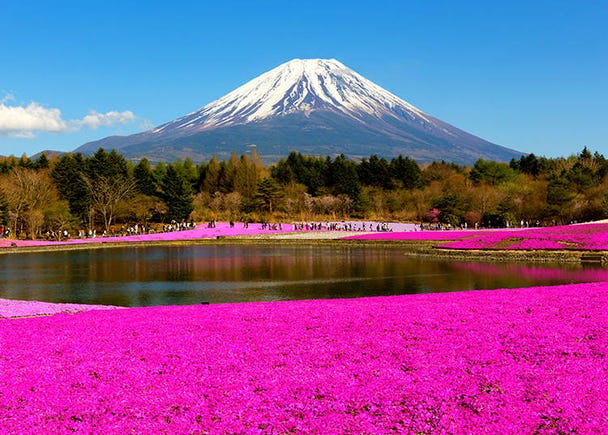 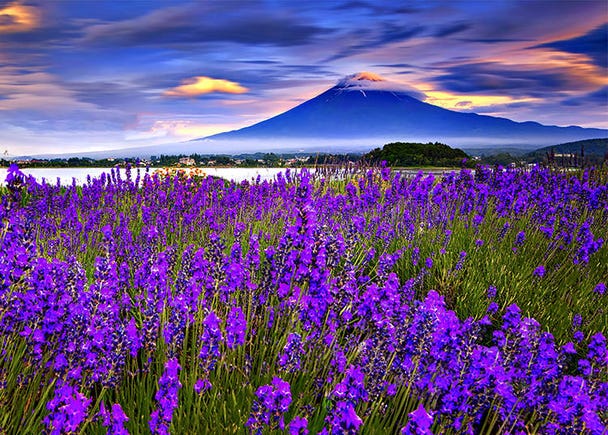 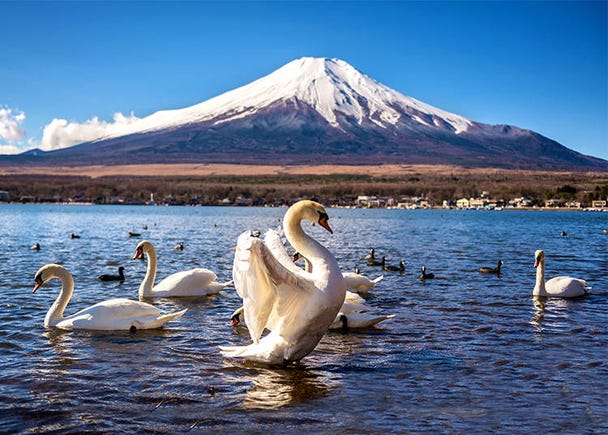 If you want to photograph Mount Fuji’s scenery, you cannot ignore the Fuji Five Lakes! At the lakes Kawaguchiko, Saiko, Yamanakako, Shojiko, and Motosuko, formed when the cave-ins of the mountain's eruptions were filled with water, various pictures of sceneries can be taken, from lake shores to Mount Fuji.

Among them, Kawaguchiko and Yamanakako are famous as locations that numerous photographers visit, regardless of whether they’re professionals or amateurs. If you are especially lucky, you can encounter both the rare Red Fuji and Upside-down Fuji at once! 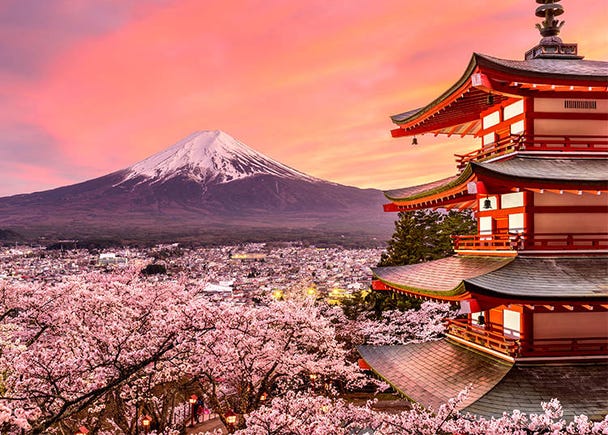 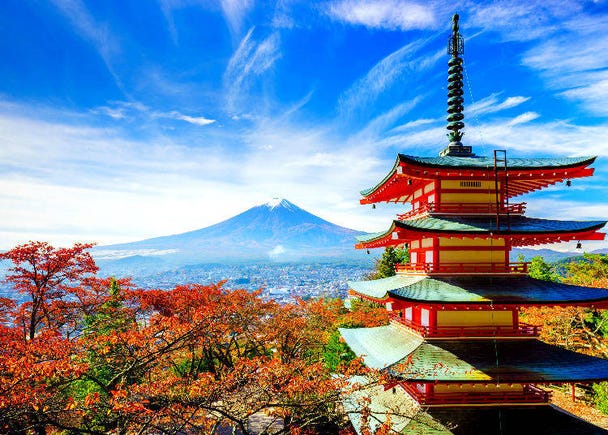 This world-famous view of Mount Fuji can be seen at Arakurayama Sengen Park in the city of Fujiyoshida, Yamanashi Prefecture. With the sublime slope in the background, the scenery of Chūreitō Pagoda, a piece of sublime Japanese architecture, makes for a magnificent view. The seasonal cherry blossoms and autumn leaves make it that much more beautiful still; this is one of the landscapes that are truly representative of Japan. 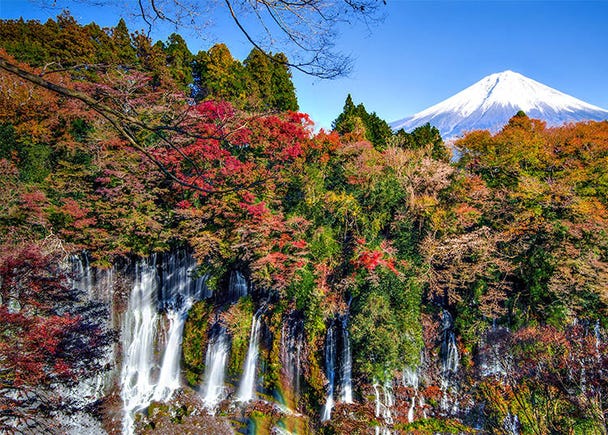 The Shiraito Falls in Shizuoka Prefecture’s Fujinomiya City. The water that pours down the rock cliff as if it was fine white threads is, with the exception of a part of the main falls, mainly spring water from Mount Fuji. Tender green in spring, the beauty of colorful foliage in autumn, the refreshing breeze of the water in summer, and even in winter, the waterfall stays at a temperature of 12 degrees and does not freeze.

6. Is Mount Fuji on Private Land? Or Does It Belong to the State? 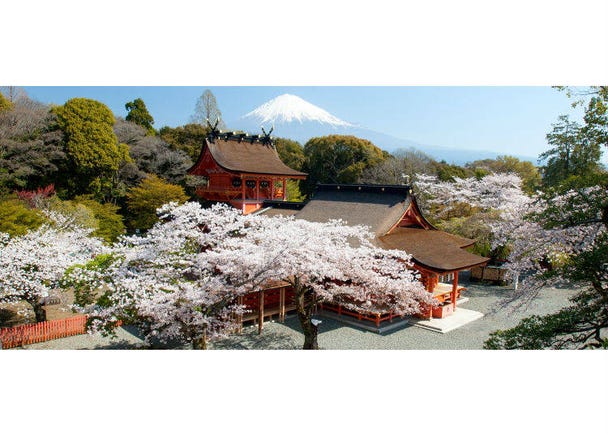 “Who does Mount Fuji belong to?” is a question that most Japanese would answer with “Everyone.” However, a part of it – from 3,360m to the top – is actually private land!

Fujisan Hongū Sengen Taisha has its origins in worshiping Asama no Okami to calm the eruptions of Mount Fuji, so the land from the Eighth Station became the sacred area of the rear shrine. Asama no Okami spread along with the Fuji belief throughout the country, now counting 1,300 affiliated shrines. Fujisan Hongū Sengen Taisha is the head shrine of all Asama shrines in Japan.

7. You Can Have a Wedding at Mount Fuji?! 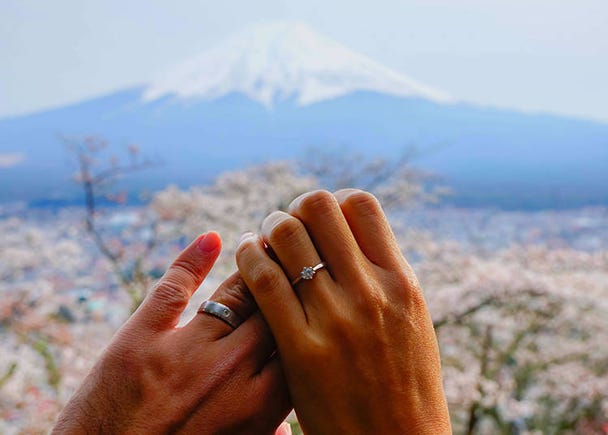 At Fujisan Hongū Sengen Taisha, wedding ceremonies can be held at the main hall on days without festivals or events. The vermilion-lacquered precincts are beautiful; cherry blossoms and wisteria bloom at the lush Asama shrine that is also a popular sightseeing destination. The wedding ceremony itself is engulfed in traditional court music as the ancient ceremonial rites are performed; blessed words are not only cast upon friends and family but also on the many tourists that visit the Asama shrine. Should there be such a ceremony as you visit the shrine yourself, let yourself be engulfed by the warm atmosphere and share the happiness of the couple.

8. Counting the Climb to the Top of Mount Fuji – What are “Stations?” 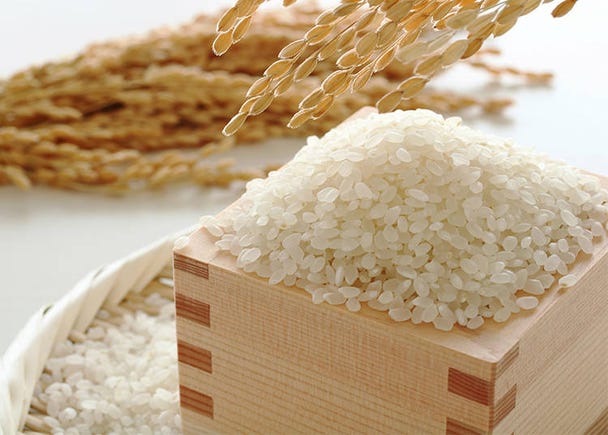 By the way, the Japanese word for “Station” is gō and appears in the shaku-kan system as a unit of volume, used to weighing rice. There are various opinions as to why gō is used for Mount Fuji’s climbing paths, it is said that it comes from 10 gō making one shō, and a pile of rice that weighs one shō resembles the revered mountain.

9. Is it True That Mount Fuji Has a Front and Backside? 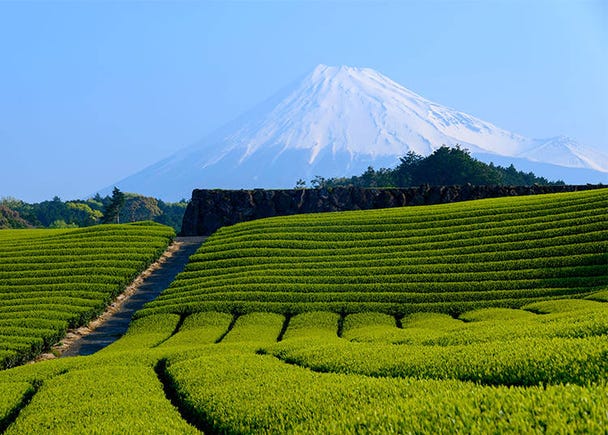 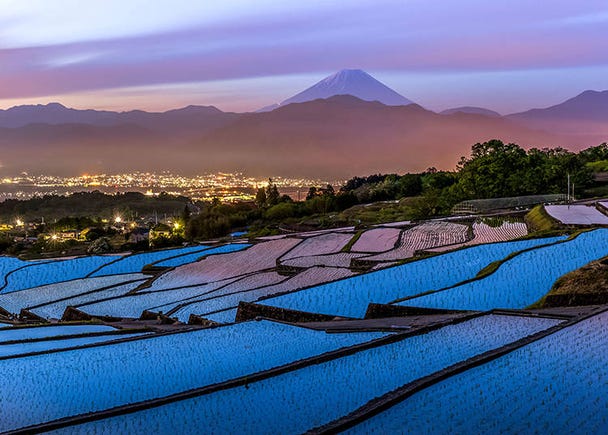 Mount Fuji seen from Suruga Bay in the central part of Shizuoka Prefecture is called “Front Fuji,” while the version seen from the Fuji Five Lakes is called “Back Fuji.” Historically speaking, there deems to have been the general perception that the southern foot of the mountain was is the “front,” while the northern foot was the “back.”

The location where Fuji stands spans both Shizuoka and Yamanashi Prefecture; especially the portion seen from the Yamanashi side is called “Back Fuji.” However, the people of Yamanashi insist that “This is the front!” So the expression “Back Fuji” is rarely used. There is constant discussion surrounding Mt. Fuji as to whether the view from the Yamanashi or the Shizuoka side is more beautiful and the two prefectures are eternal rivals! 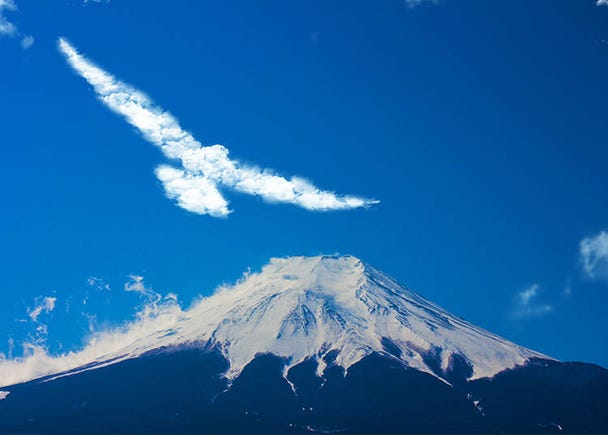 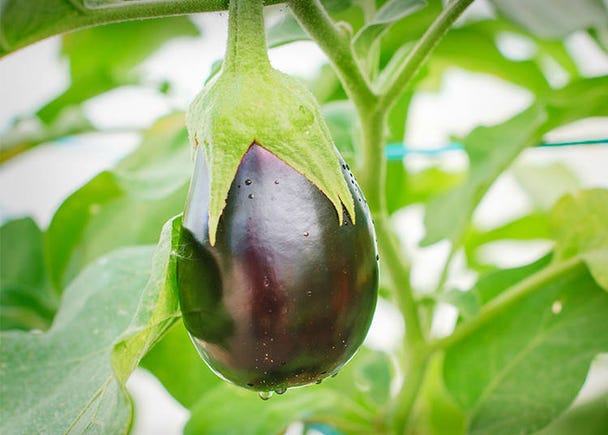 “1. Fuji, 2. hawk, 3. eggplant” is the top three of things to dream of during the first night of the new year.
If Mount Fuji, a hawk, or an eggplant appears in the first dream of the first night of the New Year, it is said to be an auspicious omen. There are only speculations about the origin of this, but one explanation states that these three words sound similar to other good things; Fuji sounds like buji (be in good health), taka (hawk) sounds like takai (to succeed), and nasu (eggplant) sounds like nasu (the fulfillment of a wish). 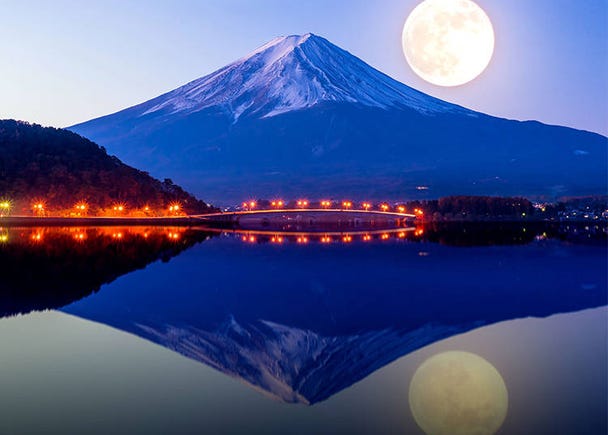 The harvest moon in autumn and Mount Fuji

Mount Fuji (富士山) has had various different kanji names. 不死山, 不二山, 不尽山, and so on, and while they were all pronounced “fuji,” they all have their own stories. Among them is the name meaning “immortal mountain” (不死山) with an origin that is slightly romantic, referring to a passage from a book from the Heian period called The Tale of the Bamboo Cutter. 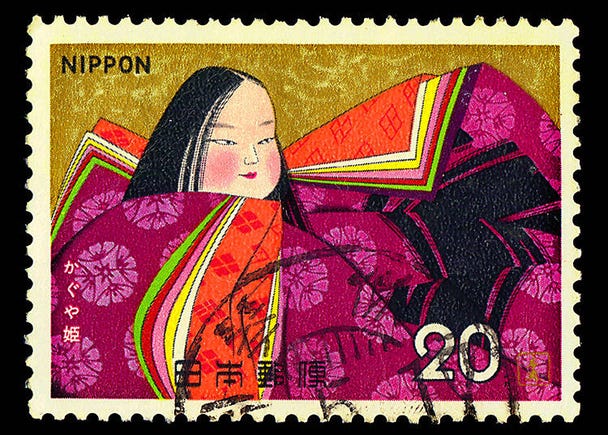 A commemorative stamp with Princess Kaguya

Japanese children know this ancient book as the Tale of Princess Kaguya, a story about a beautiful princess born inside bamboo. She is courted by nobles and gives each of them an impossibly difficult task and, in the end, even refuses a proposal from the emperor before returning to the moon during the harvest moon in mid-autumn. While the general tale of Kaguya ends here, the original text of the Tale of the Bamboo Cutter sees her give both a letter and the elixir of life to the emperor. However, he said that “Without Princess Kaguya, I do not wish to live forever” and burned both the letter and the elixir on top of the tallest mountain. Even though the princess’ thoughts were not able to reach the emperor, this mountain became known as “the mountain that does not even fall in battle” and was a popular place among samurai of later centuries. This is the story of how the “Immortal Mountain” became the "Mountain Abounding with Warriors," which is what today’s Mount Fuji means.

Other names carry meanings such as “only one in existence” (不二山) or “everlasting energy (不尽山). Both of those words portray the thought of worshiping Mount Fuji. 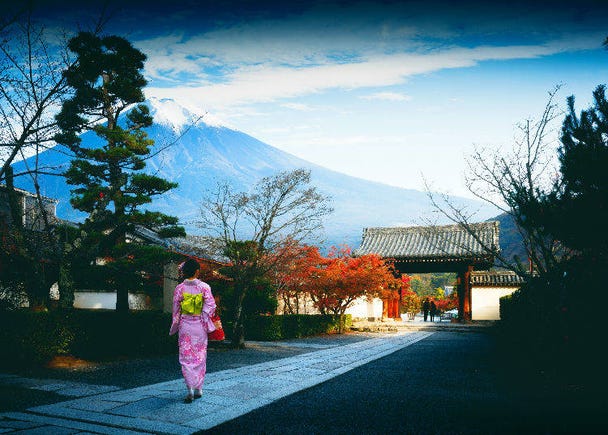 Mount Fuji has been a symbol of faith for Japanese people since ancient times; a symbol of admiration. This beautifully formed shape of grandeur leaves a deep impression on the onlooker, filling one’s heart with sublime bliss. How to enjoy Mount Fuji, how to express Mount Fuji – Japanese people agonized over these questions, giving birth to legends and beliefs manifold. By all means, please savor the stunningly beautiful Mount Fuji to your heart’s content, surrounded by lush nature, colored by Japan’s four ever-changing seasons!

Mt. Fuji 101 - All you need to know about Japan's most famous mountain!
Getting to Mt. Fuji: Complete Access Guide - With Trail Tips & More!

RV rentals are a great way to see a new side of Japan from the open road! Use LIVE JAPAN's promo code below to get 5% OFF your rental now.
・Promo code: LiveJapan_coupon_01
・On the "Request for a Quote" page, enter the promo code to get your discount.