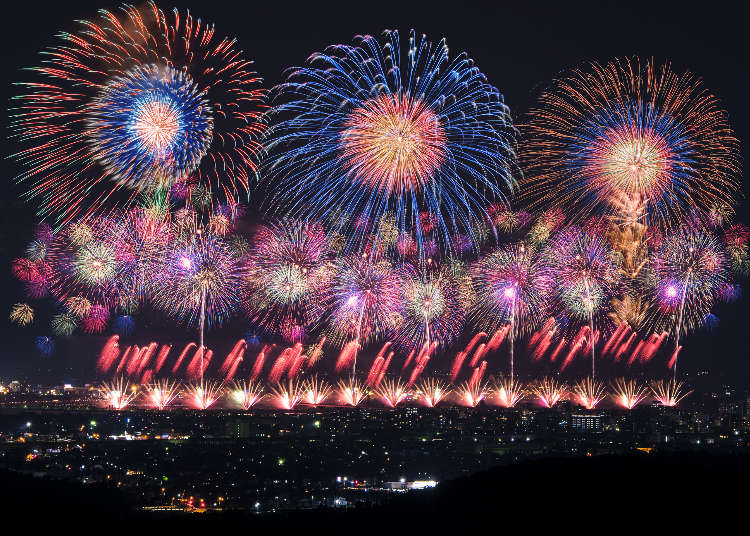 Hanabi Festivals: Everything You've Ever Wanted to Know About Japanese Fireworks! (History/Tips/Dates)

You can't talk about Japanese summer traditions without mentioning their beautiful fireworks displays. Known as 'hanabi,' fireworks festivals are held all around the country, brilliantly painting the summer night sky in a dazzling display of colors.

These three celebrations will show you amazing fireworks of colorful creativity and a scale beyond what you've ever imagined!

We spoke with the Japan Pyrotechnics Association to bring you four famous fireworks festivals and share about their culture, history, and where to see them.

Culture and History of Japanese Fireworks 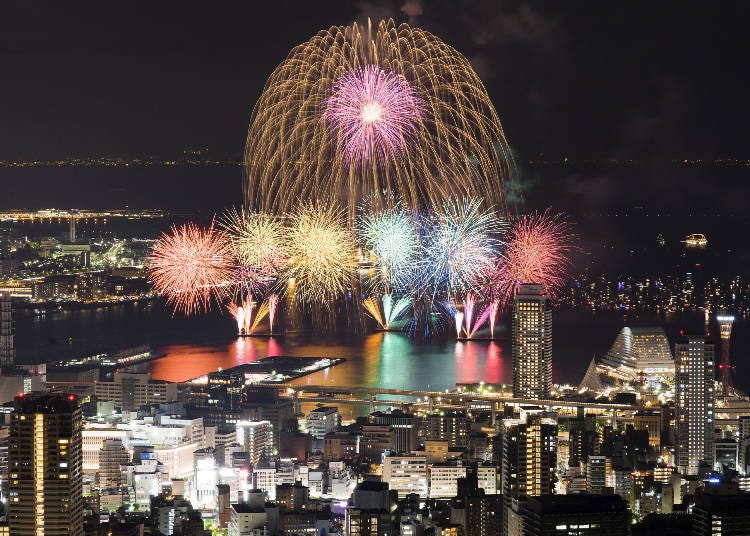 The Japanese word for fireworks is hanabi/花火, meaning "flower fire." These characters not only suggest the literal floral shape of fireworks but speak to their transient nature as well. Hanabi "bloom" momentarily, a moment in time reminiscent of hanami - the celebration of cherry blossoms.

Gunpowder, the raw material for fireworks, entered Japan in the 1500s from the West; however, it wasn't until the Edo Period (1603-1868) that the culture of fireworks displays truly began.

After the war, gunpowder for weapons was repurposed for a different use: fireworks. Samurai used them for displays at the daimyo's villa in Okawabata (downstream from the Sumida River) in Edo, or present-day Tokyo.

That popularity eventually spread throughout Edo, establishing itself as a form of play for the common folk. Soon, fireworks masters and sellers also began to appear, and the fireworks culture gradually took root in Japan. 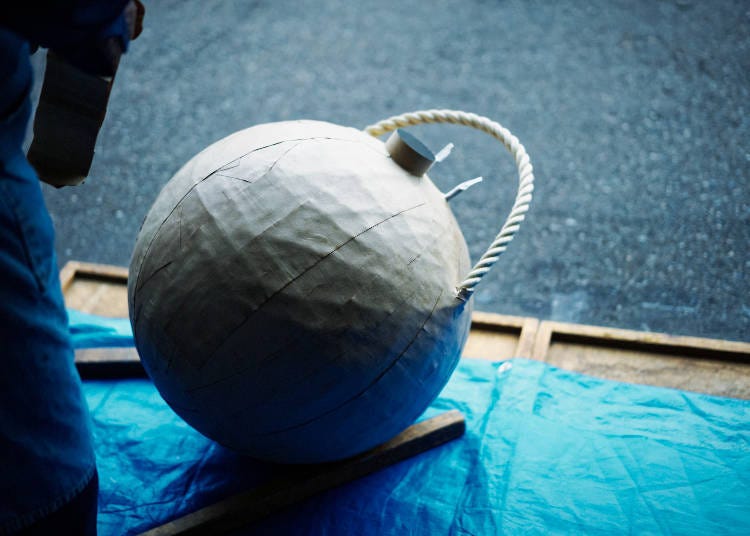 There are many types of fireworks, but the basic mechanism is simple. Using gunpowder, a round "fireworks ball" is launched into the sky, where it explodes into the beautiful shapes and colors that we all know as fireworks. 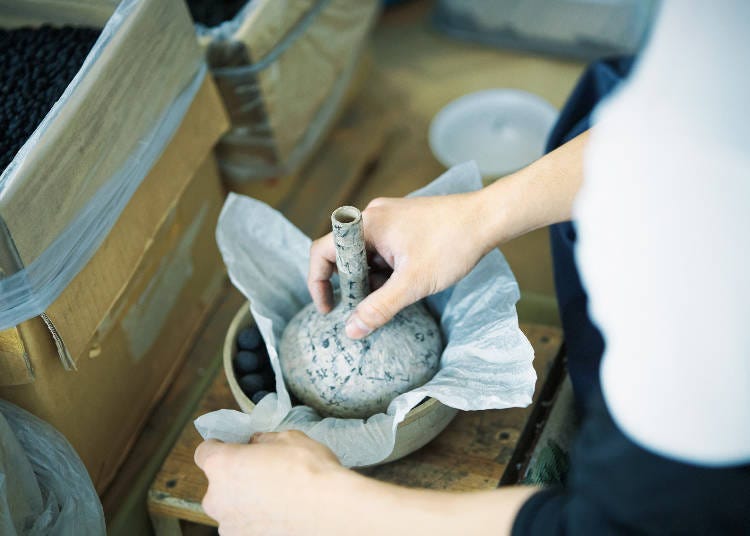 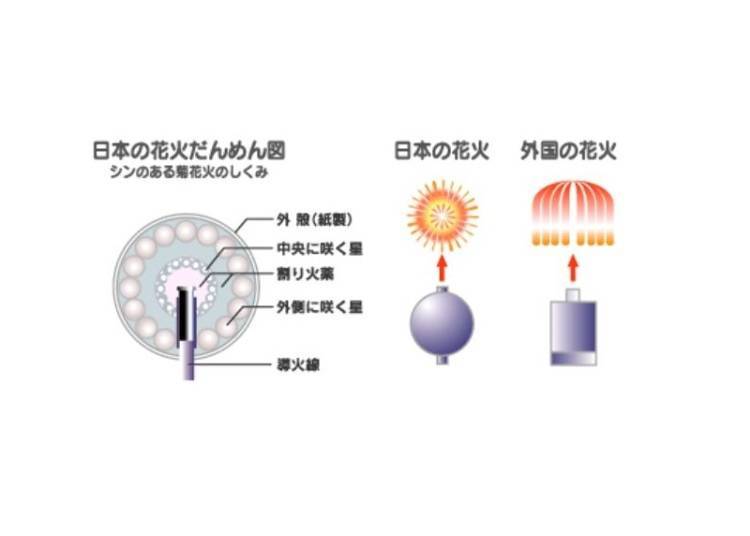 The fireworks you see at Japanese festivals are classified into three categories: "warimono," "pokamono," and "han-warimono."

Though fireworks festivals are typically nighttime events, some places do hold daytime fireworks competitions, such as the Omagari Fireworks Competition. Pokamono fireworks are the kind you'll see here.

Starmine, also known as "rapid fireworks," are what you usually see during the finale, and uses all kinds of fireworks, big and small. These are often used for large-scale displays, and designed to fascinate with their overwhelming power. 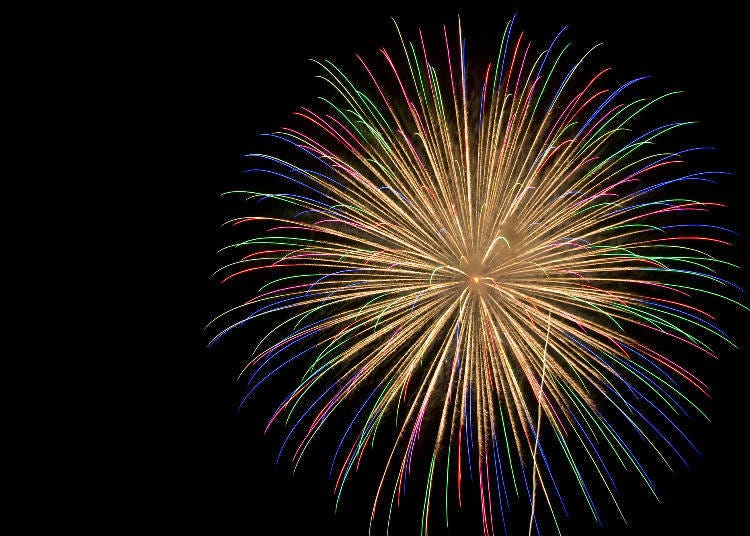 The warimono is the most basic of Japanese fireworks, in which the ball explodes in a spherical shape. One of the most well-known varieties of warimono fireworks is the Chrysanthemum, which scatters the stars with tails (trails of color) from the center in a brilliant display.

The Peony is another popular type, in which the stars scatter without leaving trails. 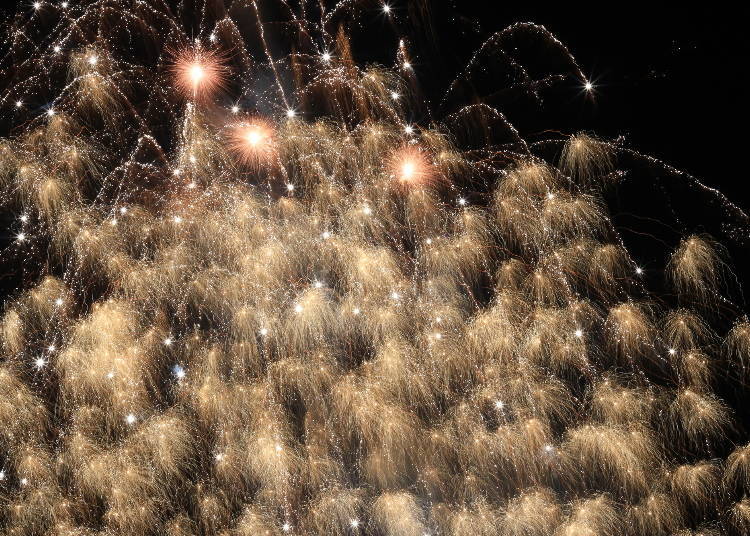 The pokamono is a firework that splits in two when it reaches the sky, releasing the contents and stars from the fireworks ball. Typical examples are the Willow, Bee, and Hanarai (literally "thunder flower").

The Willow, usually used during changing scenes or lingering sounds, is certainly one of the most attention-grabbing fireworks at displays! 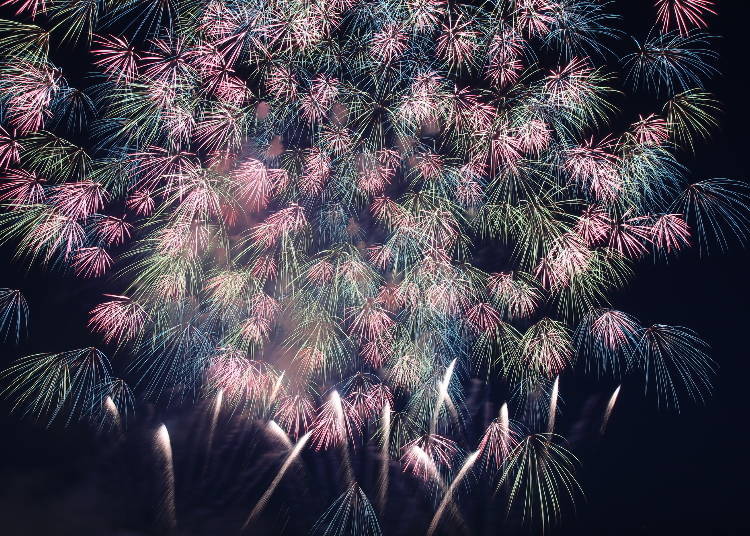 The Senrin-giku (literally "thousand chrysanthemums") is a typical han-warimono. A "senrin" is a larger fireworks ball containing multiple smaller balls, releasing a number of fireworks at a single time, one after another. Each of these fireworks explodes in different colors, making them one of the most beautiful and fun to watch!

Japanese fireworks are delicately devised with a combination of warimono and other varieties, as well as the "climbing whistle" you hear as they shoot into the sky. 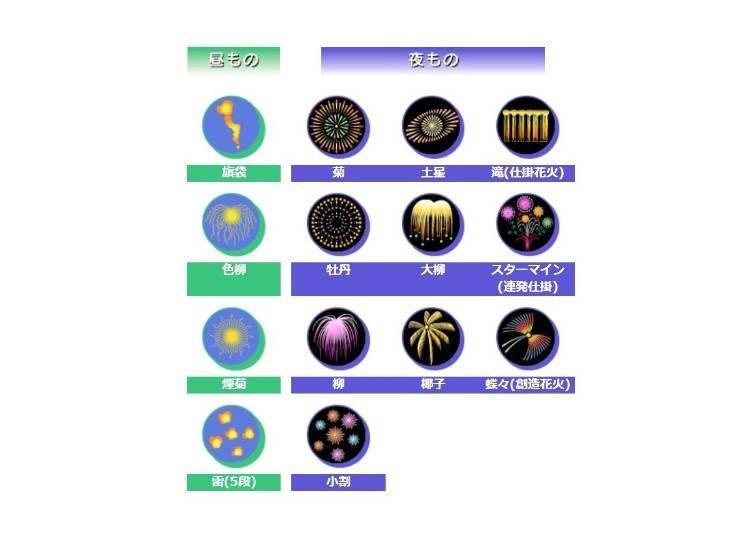 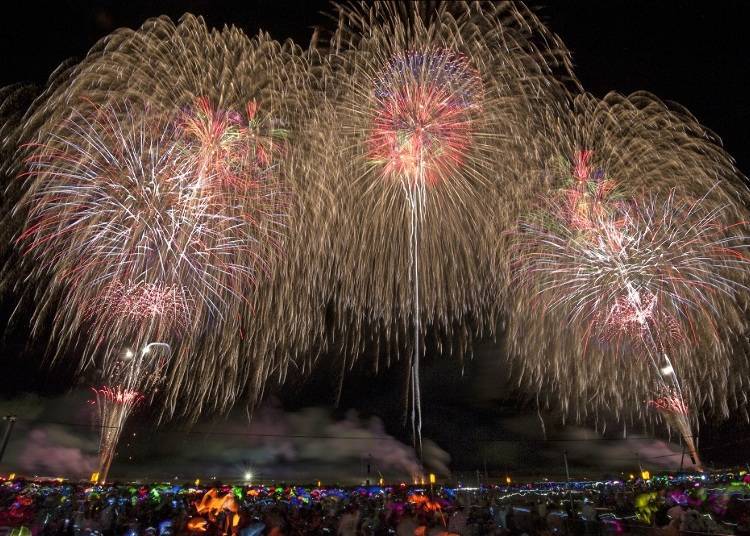 The National Omagari Fireworks Festival has one of the most prominent histories in Japan. Held every year on the last Saturday of August in Omagari, Daisen City, Akita Prefecture, spectators flock from all over the country to see it. These ingenious fireworks have been developed by top-class fireworks artists from all over Japan, and are not something you want to miss!

The tournament consists of two parts: daytime and nighttime fireworks. Daytime fireworks are rare and only seen at Omagari competitions in Japan. At night, a continuous barrage of gorgeous fireworks blankets the sky with breathtaking beauty and power.

Two other popular events are the Special Star Mine, a musical fireworks display held between competitions, and the Wide Star Mine Fireworks, provided by the competition and jointly produced by local fireworks companies. 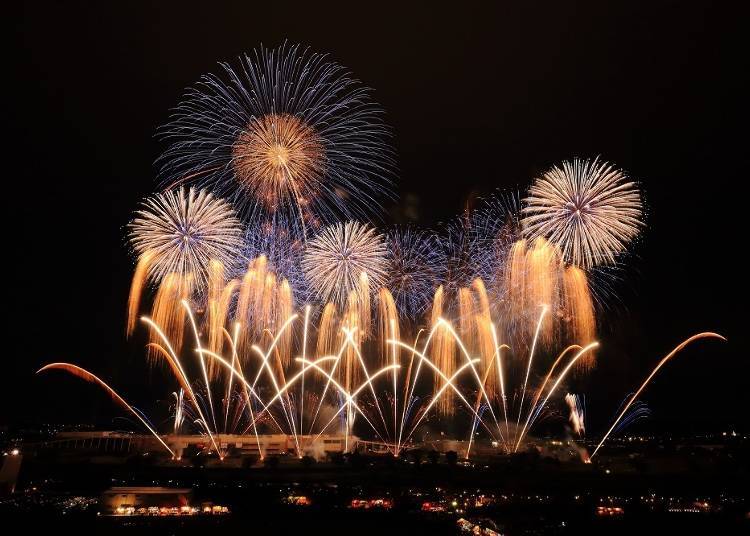 The Tsuchiura National Fireworks Festival is held on the first Saturday of November every year in Tsuchiura City, Ibaraki Prefecture. At this display, started by volunteers in 1925, fireworks artists from all over the country gather together to compete for the best fireworks technology.

The competition consists of three categories: Size 10 Fireworks, Creative Fireworks, and Starmines. The Starmine practically represents the history of Tsuchiura fireworks itself! Hundreds of colorful fireworks are launched in time as they paint the autumn sky. 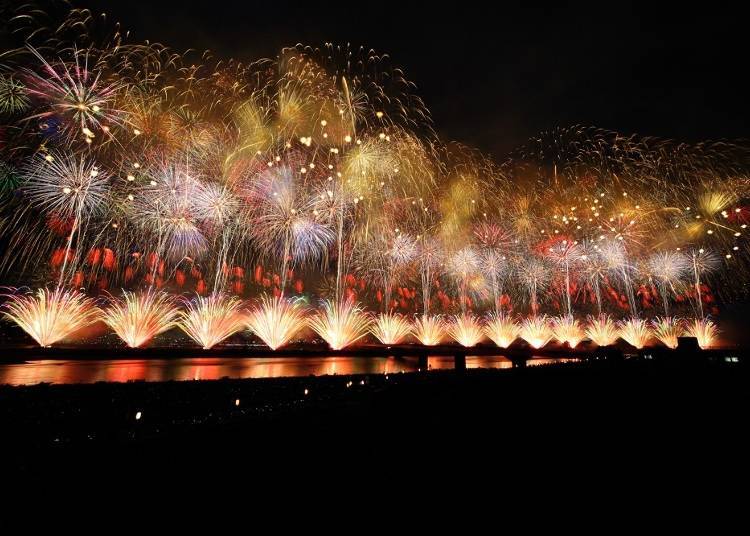 This fireworks display is held every year on August 2nd and 3rd on the Shinano River bank in Niigata Prefecture from 7:20 PM to 9:10 PM. It is one of the three major fireworks festivals in Japan, along with those in Omagari and Tsuchiura.

This grand-scale masterpiece of an event features hundreds upon hundreds of size 10 Shakudama fireworks, including their specialty, the "Shosan Shakudama," a gigantic flower-shaped firework with a diameter of 650 meters!

There are a wide variety of other fireworks as well, including the "super-wide starmine," in which multiple starmines in five different colors explode at the same time, and the "reborn fireworks phoenix," which reaches a total length of 2 km! You won't want to miss this epic, musical story as told by an array of fascinating fireworks. 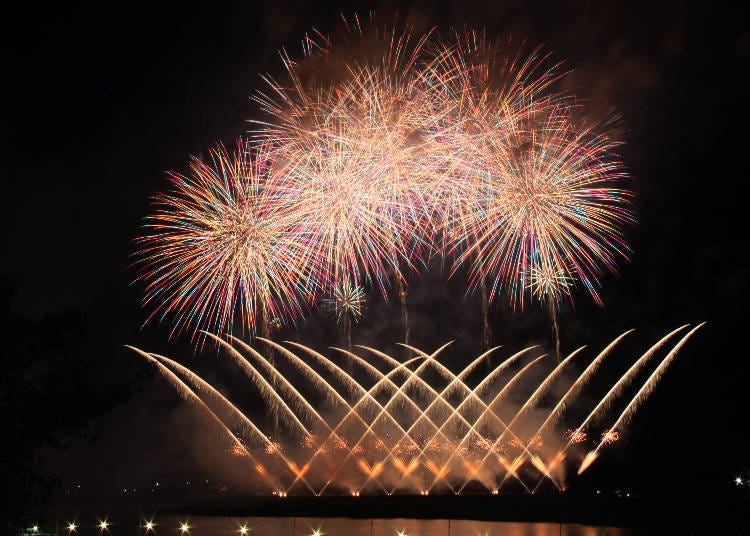 Ise Jingu, located in Mie Prefecture, is one of the most venerable shrines in Japan. In 1953, the first fireworks display was dedicated to the shrine.

Another of Japan's major fireworks festivals, this one is also held every year in mid-July. It showcases the works of fireworks artists from all over the country, from Akita Prefecture in the north to Kagoshima Prefecture in the south. The competition is a rhythmic display where each pyrotechnician releases 40 sets of Launched Fireworks, including three sets of size 5 fireworks (about 15cm) and one round of size 10s (about 30cm), as well as 10 sets of Star Mines. 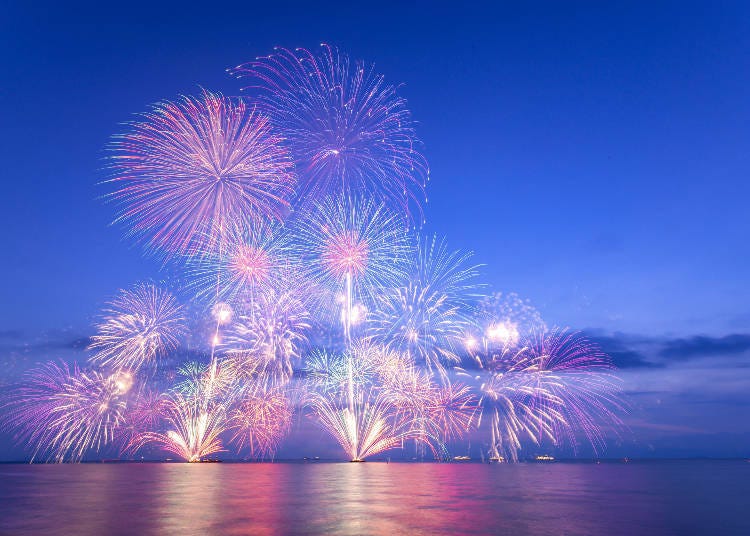 Fireworks masters have played a role in the long history of fireworks through hard work and numerous competitions. They have also heralded Japan's fireworks as some of the most beautiful and artistic in the world. So many hanabi festivals are held all over the country, you'd be hard-pressed to find a summer weekend without one!

As long as there are people who love fireworks and masters to create them, dazzling displays of fireworks will continue to brighten Japan's night sky for plenty of summers to come.