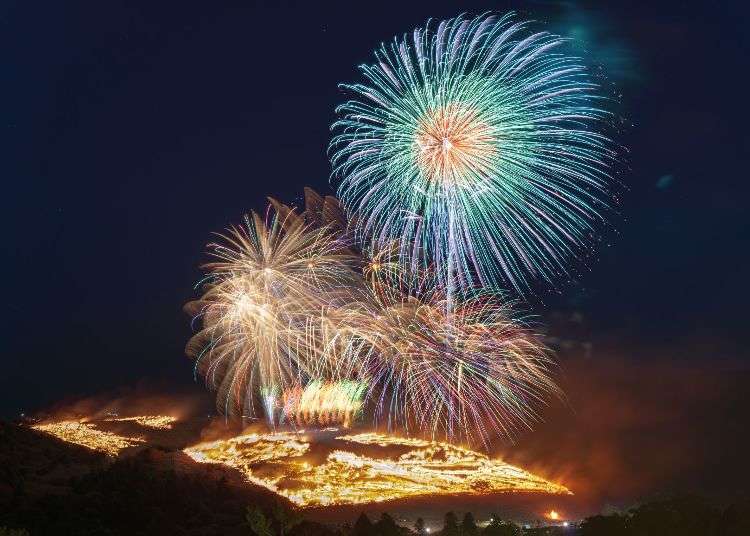 Wakakusa Yamayaki: literally meaning "Burning Mount Wakakusa", this event held on the 4th Saturday of January every year is a traditional ceremony of ancient Nara that heralds the coming of early spring.

The fire that spreads out across Mount Wakakusa paints a spectacular sight in the clear winter night sky as it turns into a fiery shade of crimson red. On the day of the ceremony, many other events, functions, and activities will be organized as well, including a colorful fireworks show.

All in all, this visually impressive traditional event is definitely something worth experiencing at least once in your lifetime.

Date: January 23, 2021 (Sat) * Canceled in case of stormy weather
Mt. Wakakusa Access: Typically, you can enter Mt. Wakakusa from the foot gates (north and south) of Mt. Wakakusa, but in 2021, the gate at the foot of the mountain will not be opened and you will not be able to enter the mountain.
2021 Festivities
・Yamayaki (Ignition range will be reduced) * Ignition time: 18:00-18:30
・Nogami Shrine Festival (only for those involved)
・Live distribution (a series of events from Nogami Shrine festival etc. to Yamayaki will be distributed)
What will be canceled in 2021
・Fireworks
・Torch procession
・Foothills event (dedication performance, hot food booth, fire brigade departure ceremony, deer rice cracker flying competition, etc.)
・Special bleachers at the foot of the mountain

Mount Wakakusa: The Symbol of Nara 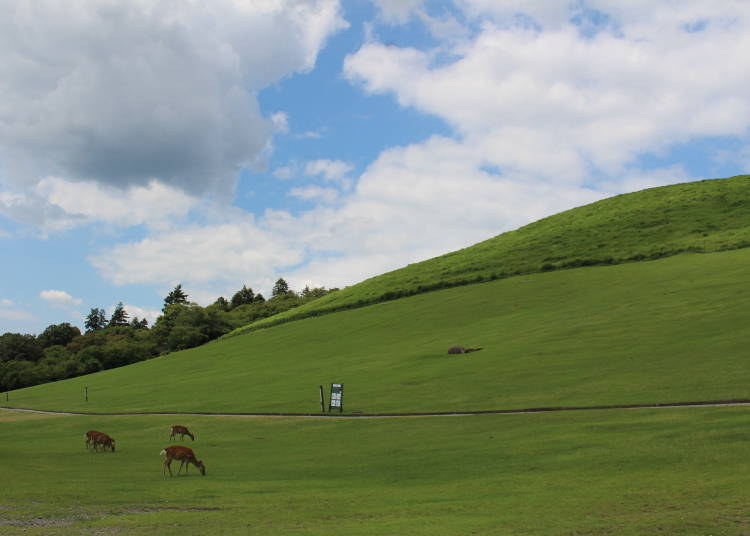 Mount Wakakusa stands at 342 meters (about 1,122 feet) above sea level and is the symbol of Nara Park. Many visitors flock to this popular mountain when it is open to the public between the third Saturday of March to the second Sunday of December, and it takes about 30 to 40 minutes of hiking to reach the summit. Those who make the journey to the mountaintop are rewarded with a panoramic view of Nara Park, Nara City itself, as well as the nearby Mount Ikoma.

The usual way of getting to the mountain is via Nara Kotsu Bus (Nara City Loop Line). Disembark at the Todaiji-Daibutsuden/Kasugataisha-mae bus stop and walk about 15 minutes to reach the foot of Mount Wakakusa. On the day of the event, however, the road from the intersection before the prefectural building to the foot of Mount Wakakusa may be closed to vehicles, so either plan to go earlier if you intend to take the bus, or just be fully prepared to enjoy the walk to your destination. 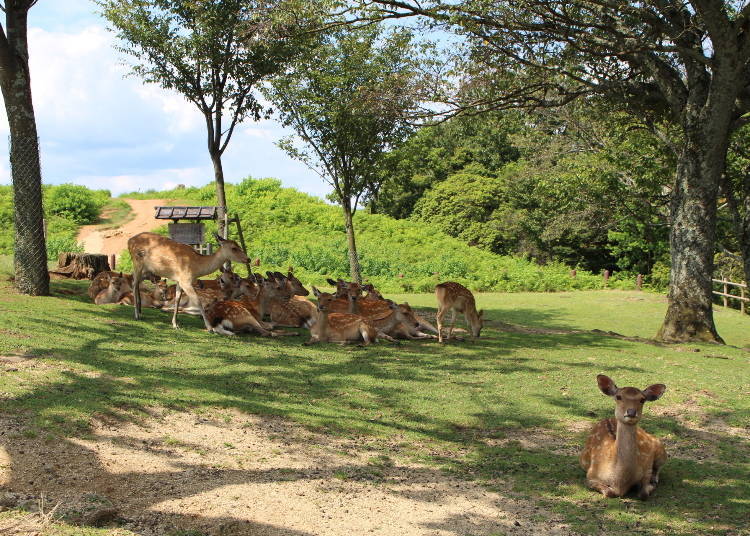 On the third summit of Mount Wakakusa is the large keyhole-shaped tomb mound known as Uguisutsuka Tumulus. There was a superstition in times past that the mountain had to be kept burning until the first month of the new year in order to stop spirits from coming out of the tumulus and terrorizing people, and this led to many arson attacks in the vicinity of the mountain. In December 1738, Nara's magistrate office issued a notice to forbid setting Mount Wakakusa on fire in an attempt to rectify the situation, but the arson attacks continued. These uncontrolled fires were constantly in danger of spreading to nearby shrines, so at the end of the Edo period (1603 C.E. to 1868 C.E.), Tōdai-ji and Kōfuku-ji, shrines that bordered Mount Wakakusa, and the Nara magistrate's office started to oversee the mountain burning instead. This mountain burning ceremony can thus be said to be a memorial service of sorts to appease the souls buried in the ancient mountaintop tomb of Uguisutsuka. 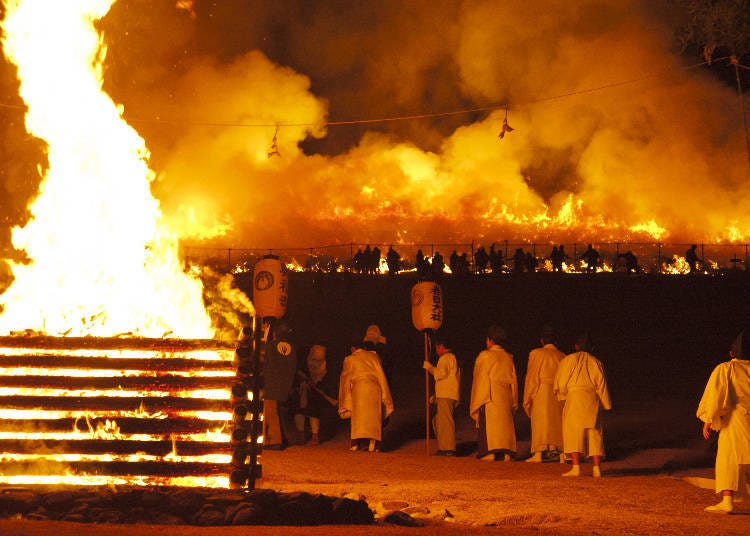 The ceremony starts at 4:45 p.m. when the Great Tondo sacred fire of Kasuga in Tobihino is transferred to torches in a Sacred Fire Acceptance Ceremony. At 5:05 p.m., about 40 people in historical costumes will start transporting the torches in somber lines. The sacred fire passes through Mizuya Shrine before reaching Nogami Shrine at the foot of Mount Wakakusa. At 5:25 p.m., Mizuya Shrine is lit up with torches. Thereafter, from 5:40 p.m. onwards, a ceremony to pray for a successful mountain-burning is held at Nogami Shrine. At 6:15 p.m., large-scale fireworks are released and by 6:30 p.m., fire from the great bonfire in the middle of the mountain is transferred to torches and on the blowing of the horn or Triton's trumpet, the entire mountain is set aflame all at once. 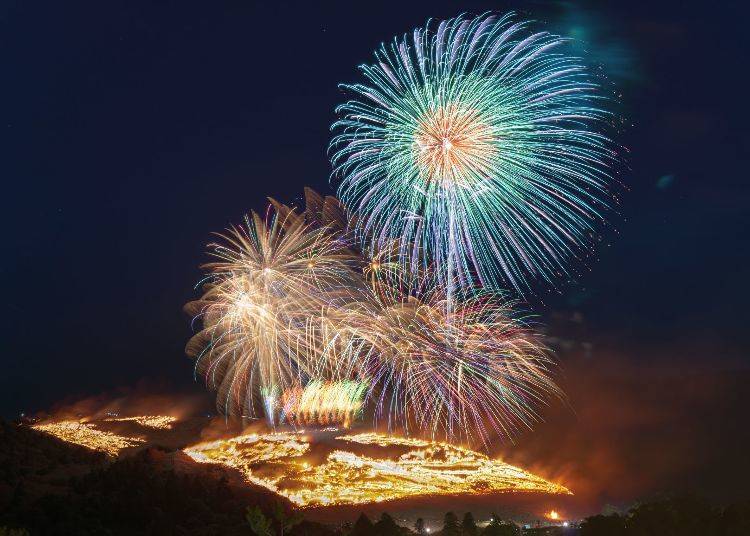 The massive fire that is started at 6:30 p.m. sends tall flames throughout the entire mountain and can be seen with the naked eye from quite a distance away, gobbling up the scenery around them. Depending on how conducive the environment is at the time to the burning, the fire is usually at its most intense for about 30 minutes. The flames eventually start to die down after that, before completely disappearing in about one hour.

Decide in advance where you want to view the fire! 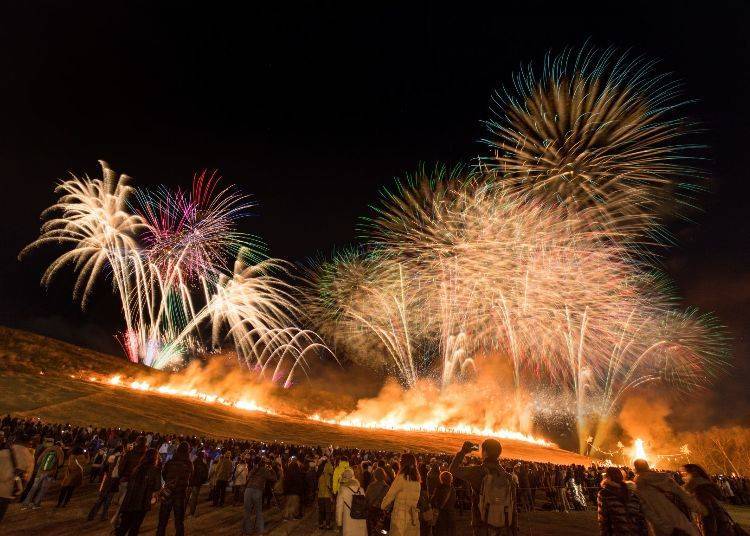 To ensure the best experience of the mountain-burning ceremony at Mount Wakakusa, it's important to decide in advance where exactly you'll be viewing the event. If you want to experience the intensity of the fire up-close and personally, the best place to do that would be at the foot of Mount Wakakusa itself! If you're hoping to see the beautiful sight from somewhere a bit of a distance away from the foot of the mountain, you can always consider going to either Ukigumoenchi or Kasuganoenchi.

Don't miss the other Nara events too!

As mentioned, there will be plenty of other events being held on the day itself as well. For example: The Deer Senbei (rice crackers) Throwing Tournament where contestants throw specially made deer senbei into the distance and see whose senbei makes it the farthest. This event is held between 12:30 p.m. to 3:00 p.m. at the entrance of the foot of Mount Wakakusa and costs 300 yen to take part. Another event is the Mount Wakakusa Yamayaki Cooked Food Booths, where you'll find pop-up stalls selling food that reproduces the traditional meals being passed down in Kasuga Taisha, Kōfuku-ji, and Tōdai-ji - the three shrines involved in the mountain-burning event. The booths will be open from 1:00 p.m. to 7:00 p.m. Besides these, there will also be a special stage where dedication music is being performed. With so many must-see traditional events happening at once, it's going to be really hard to decide which one to go for first!

Your First Trip to Nara - A Guide to the City's Characteristics and Highlights
An Introduction to Must-See Shrines and Temples in Nara
*This information is from the time of this article's publication.
*Prices and options mentioned are subject to change.
*Unless stated otherwise, all prices include tax.