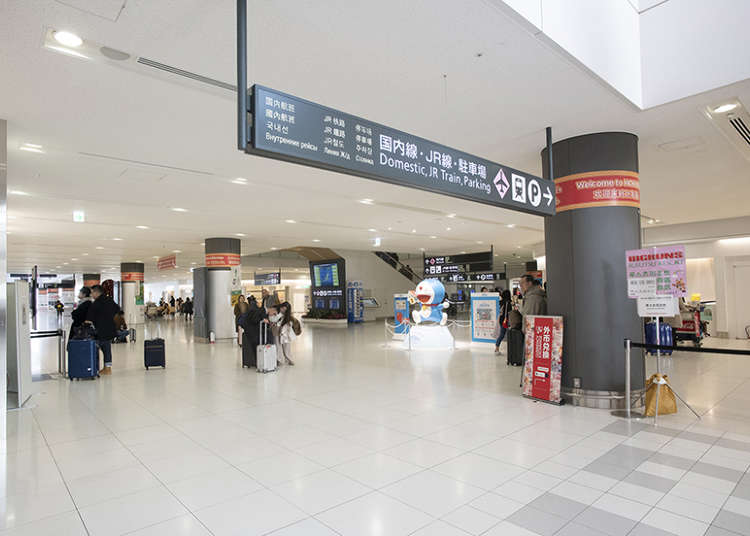 New Chitose Airport Transportation: How to Get From Hokkaido's Main Airport to the Best Sightseeing Spots!

New Chitose Airport is the main point of arrival for most visitors for their flight to Hokkaido. From there, as you might expect, there are a ton of different transportation options available, so it can be pretty hard to choose which is right for you.

We put together this guide to help you find out how to get from New Chitose Airport to Sapporo and other popular sightseeing spots.

Here we will explain in detail how to get from New Chitose Airport's International Arrivals Gate to the boarding points of each type of transportation. 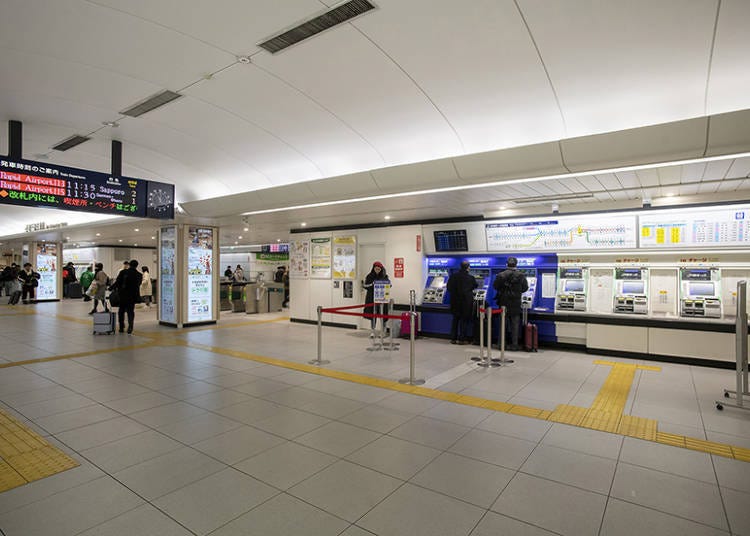 Japan Railways (JR) runs trains to all of Hokkaido’s major cities and their surrounding areas. The Rapid Airport train from New Chitose Airport can reach JR Sapporo Station in as little as 33 minutes.

Changing trains at the adjacent Minami-Chitose Station and taking a conventional limited express train will also make it possible to travel between major cities in a relatively short time.

Limited express trains heading for more northern areas like Asahikawa and the Sea of Okhotsk (Kitami & Abashiri) are less frequent. 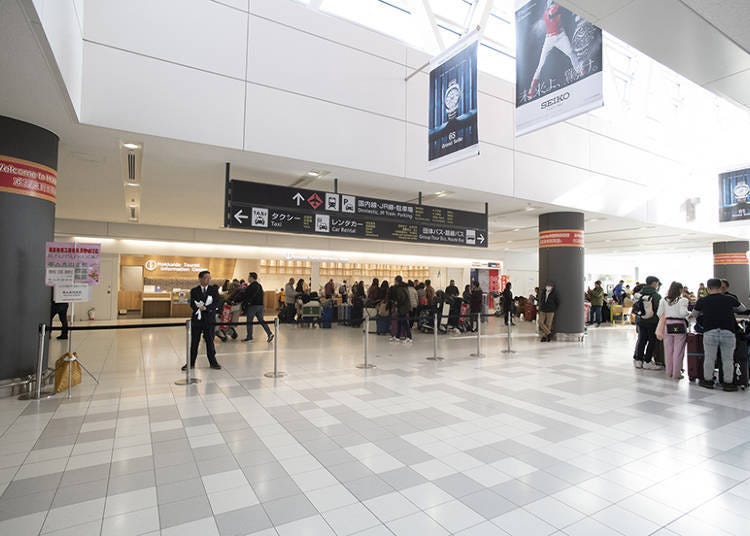 As soon as you exit the International Arrival Gate, you’ll see a sign with directions to the other transportation methods with JR and domestic flights posted in the middle of the sign. As you walk along the central passage, you’ll be able to follow more signs reading “JR Train.”

The corridor is long, but there are moving walkways and carts available to make transit smoother. 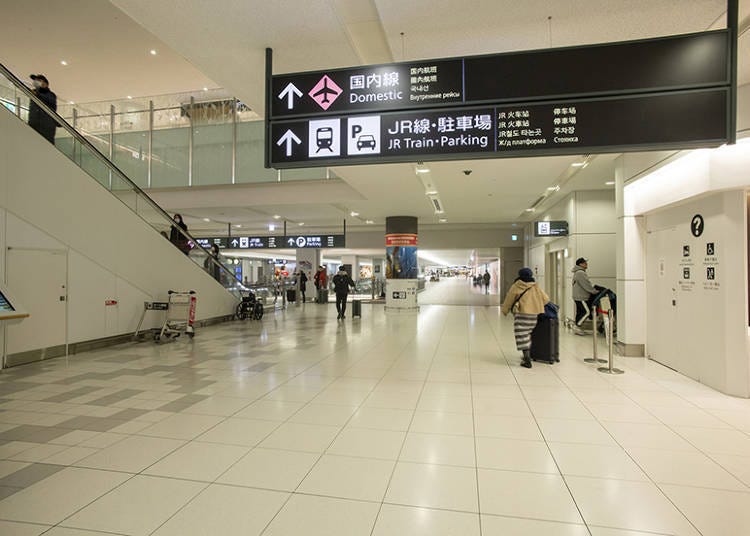 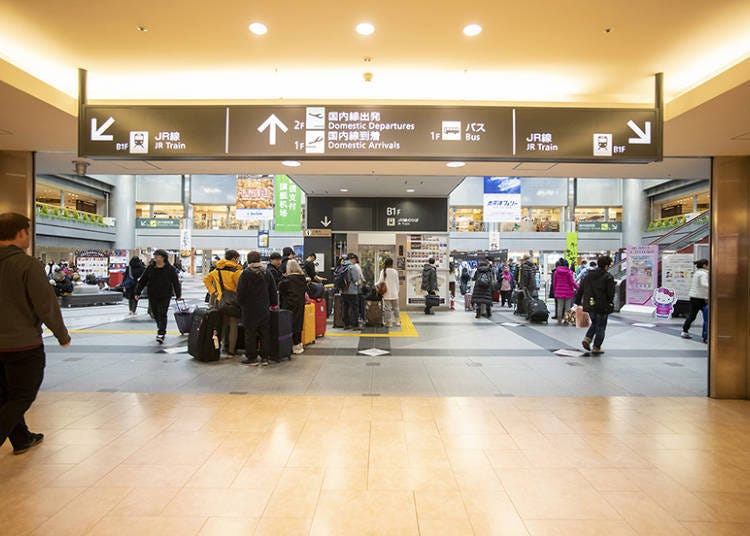 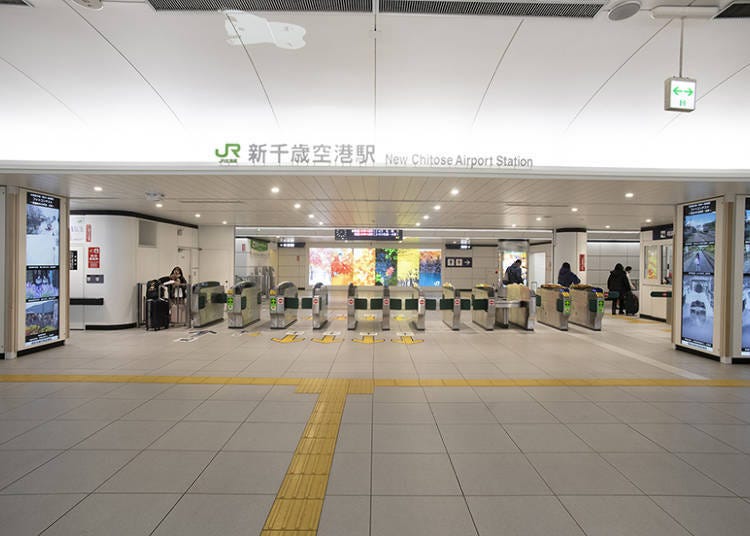 Proceeding along this route, you will arrive at the Domestic Terminal and more signs directing you to the JR Trains. There are escalators and elevators to floor B1 and JR New Chitose Airport Station.

Take note, the escalator only goes halfway and then you’ll need to use the stairs, so if you have large luggage, use the elevator! 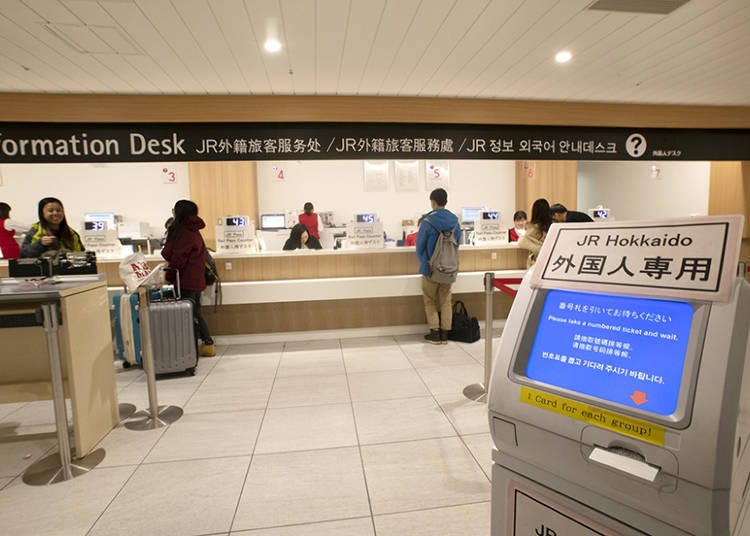 JR New Chitose Airport Station has a tourist information desk with staff who can speak English, Chinese, and Korean available from 8:30 to 19:00 and the Hokkaido Rail Pass can be purchased here as well. 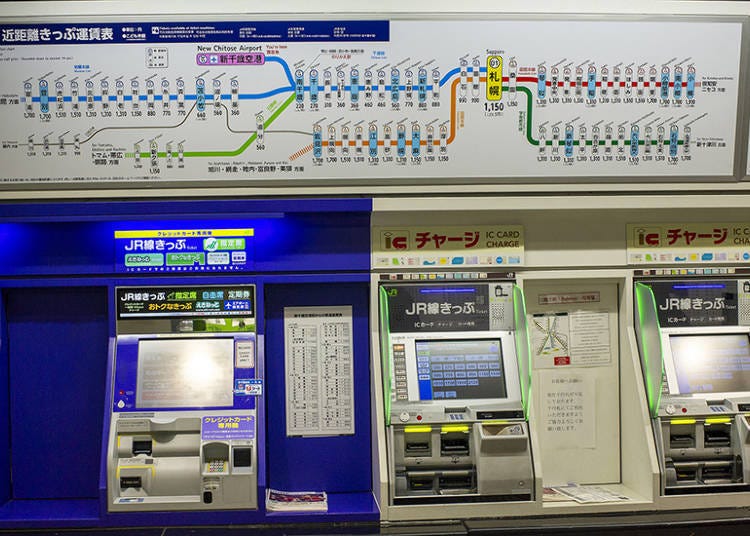 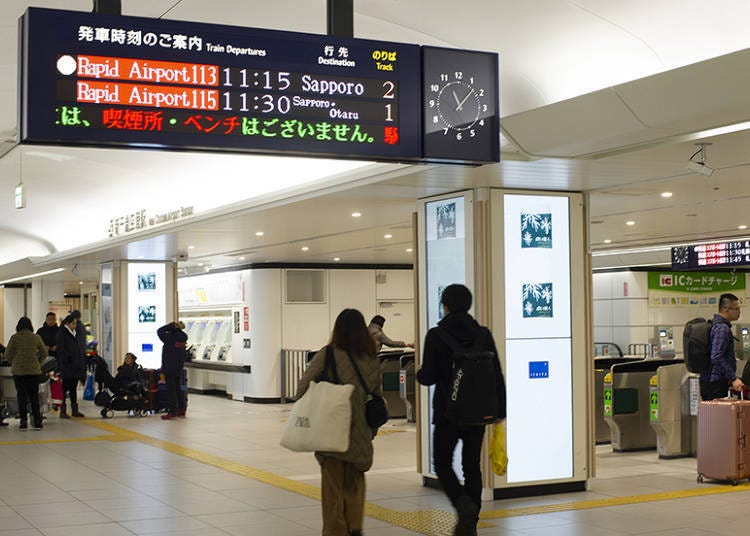 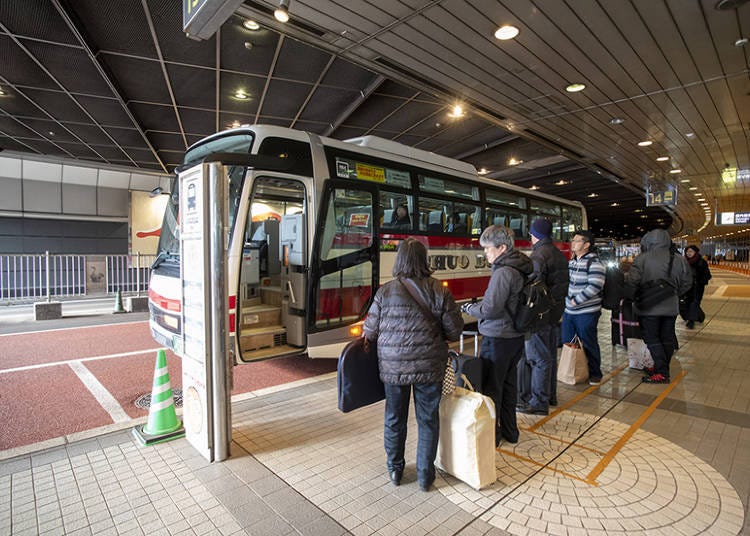 Highway buses are a very convenient and reasonably priced way of arriving at specific locations within Sapporo, Niseko, Tokachigawa Onsen, etc. Reservations are required for some routes.

Also be aware that seats are limited and may be full during Golden Week, Obon, and New Year's holidays. 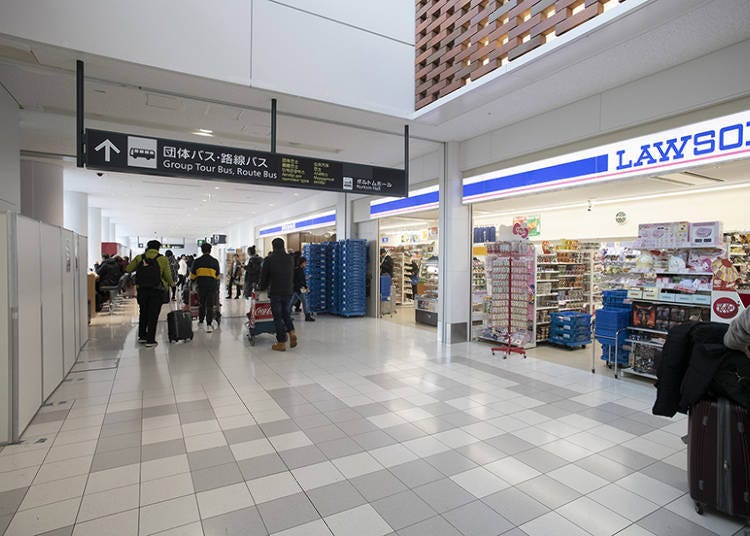 Some express buses can be boarded from both the International and Domestic Terminals, while others only depart from the Domestic terminal. Check in advance where you need to get on your highway bus.

■ How to access the bus terminal at the International Terminal
The main transportation signboard just outside the International Arrival Gate provides direction to the “Routing Bus / Group Bus” to the right. Head that way to reach the first floor bus stop. 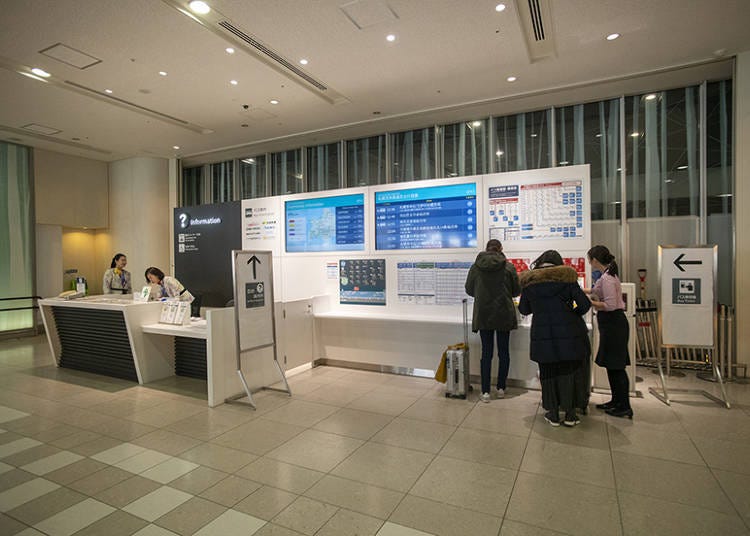 There’s an information counter on the ground floor where you can ask about routes and buy tickets. Foreign language signs and guidance are available. 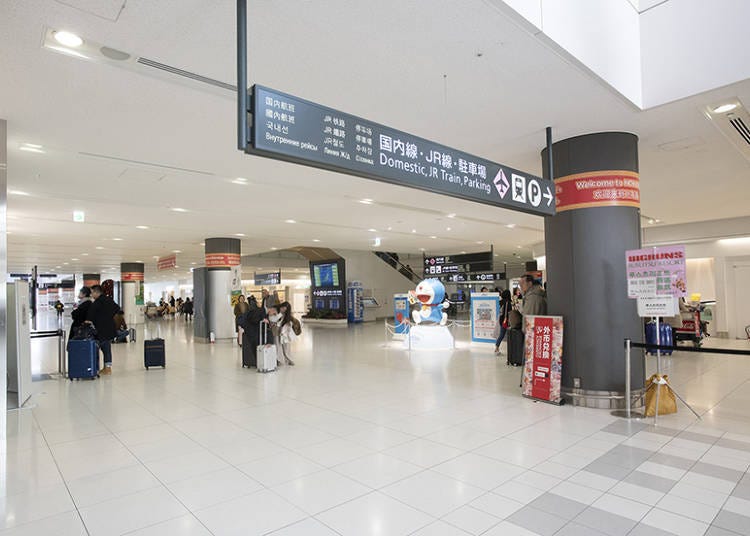 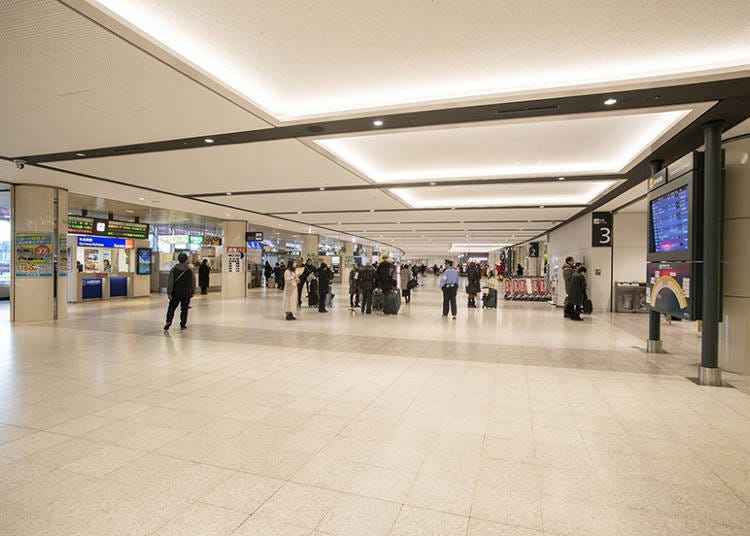 Information counters for Chuo Bus, Hokuto Kotsu, and Donan Bus are located on the first floor of the Domestic Terminal Building. 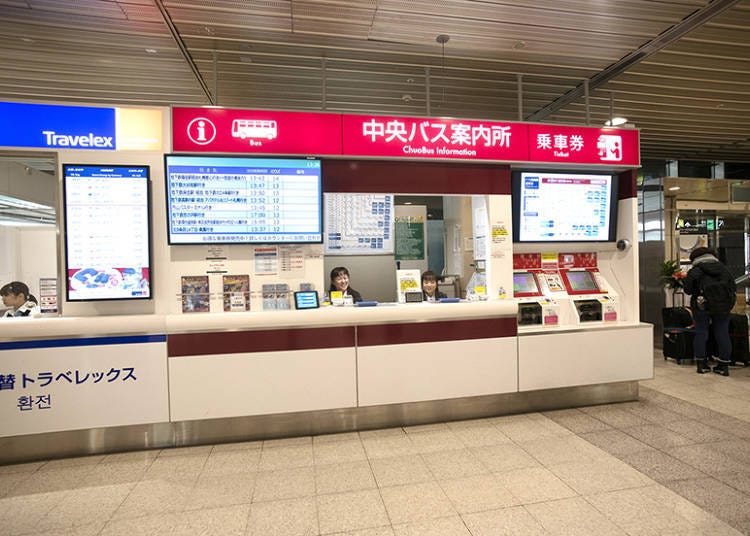 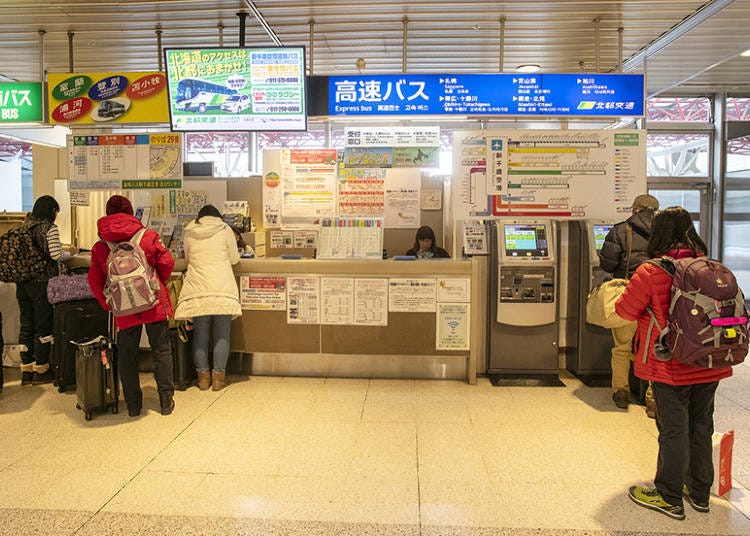 The information counters have automated ticket vending machines, and staff members are always present and can offer some simple foreign language assistance.
Chuo Bus and Hokuto Kotsu tickets can be used on both routes as long as they are within the same fare range. 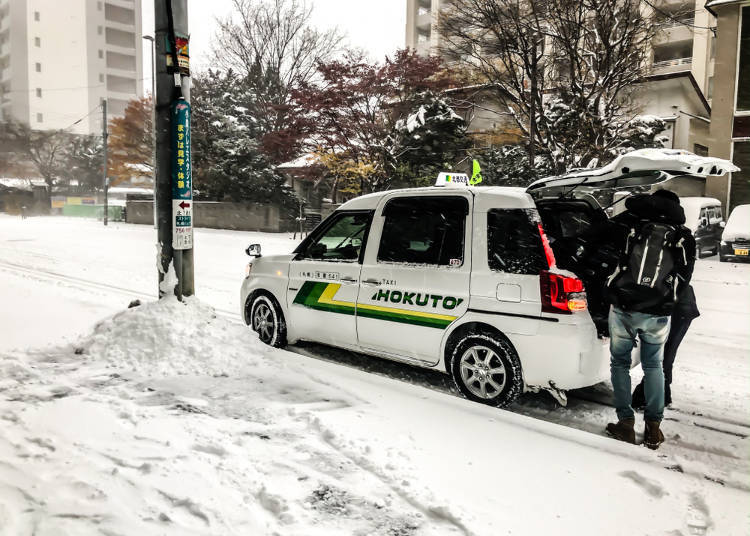 If you have trouble finding other suitable transportation options and want door-to-door transit to your destination to be as easy as possible, or if your budget allows, you can take a taxi.

Each company operating from New Chitose Airport to Sapporo offers a flat-rate fare (about 9,000 yen).
Recently, more taxi fares can be paid by credit card or electronic payment methods. 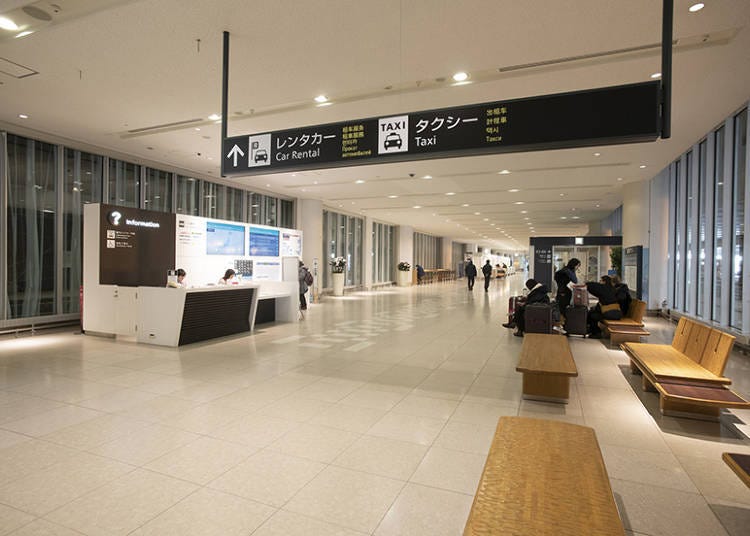 To use a taxi or rental car, head left from the international arrival gate and follow the signs. 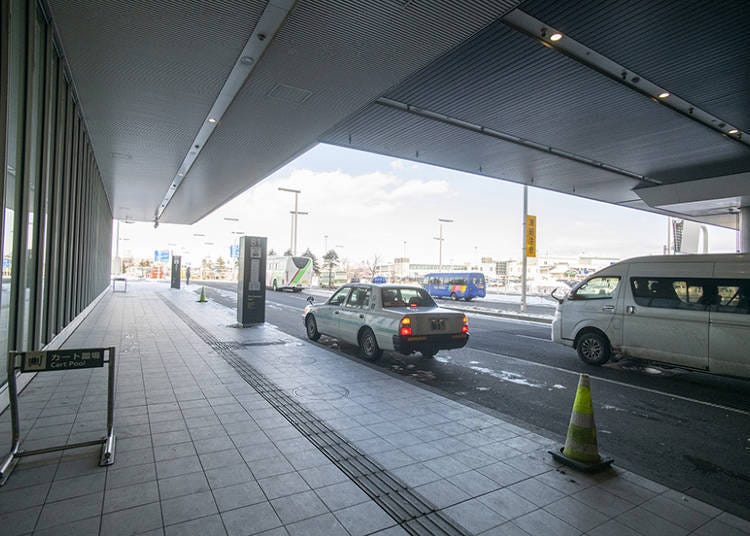 The ground floor taxi stand can be reached by escalator or elevator. 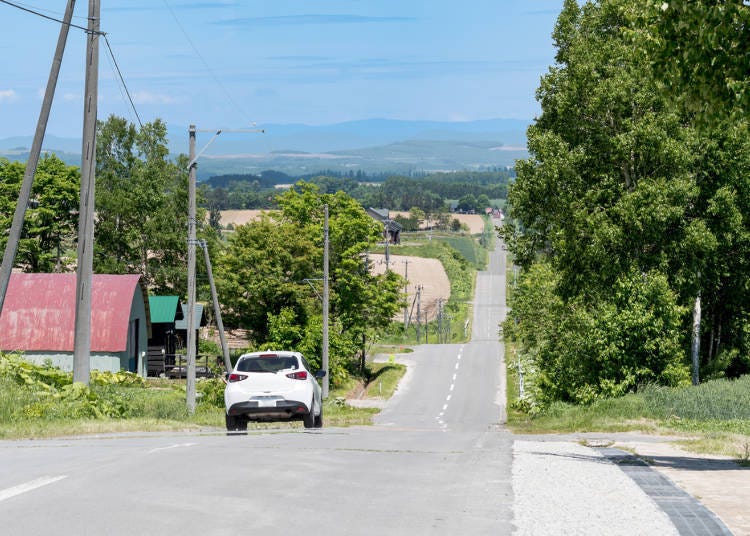 With an international driver’s license and a car navigation system with foreign language options, you can freely move anywhere from the airport, reach your destination smoothly, and even enjoy a side trip along the way.
There are rental counters for 12 companies in both the International and Domestic Terminals.

Keep in mind that you’ll have to find parking everywhere you go and, even in Hokkaido, parking spaces are limited in urban areas. Be aware that popular tourist destinations may have queues waiting for parking.
In recent years, the frequency of accidents involving tourists has increased. Be sure to follow traffic rules and signs, and exhibit good driving manners. 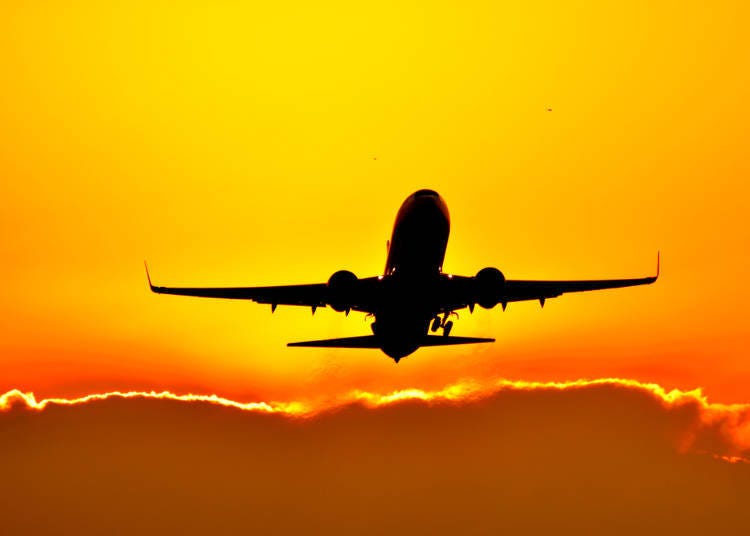 Hokkaido is huge but you can reach six regional airports in approximately 35-50 minutes: South to Hakodate; Kushiro, Nakashibetsu, and Memanbetsu to the east; and Wakkanai and Rishiri in northern Hokkaido. Flying is a convenient way to save time if you have a restricted itinerary.

Of course, cost is an issue with regular fares almost twice the price of other modes of transportation. If you want to get the best value, check the airlines’ websites for early discounts.

If you encounter any issues, head to the Information Center. 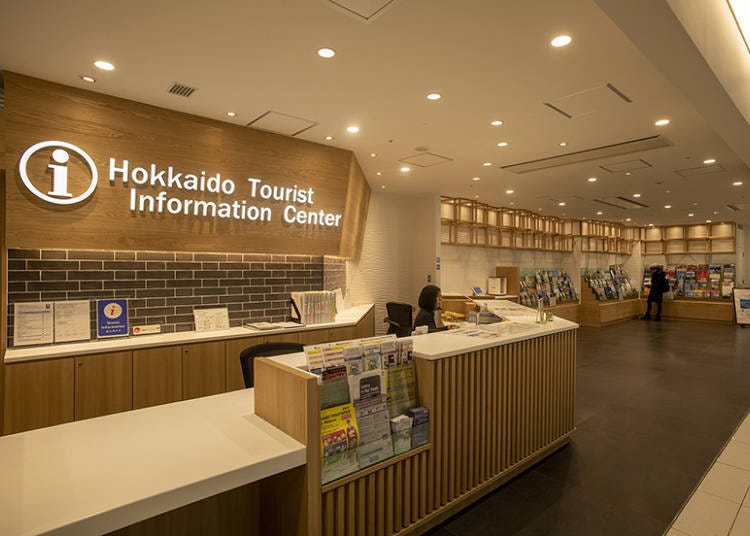 The Hokkaido Tourist Information Center is just outside the international arrival gate. There are pamphlets on major tourist spots, hotels, ski resorts, and other information about Hokkaido, transportation, and the airport’s facilities. After having your sightseeing questions answered here, you can get started! 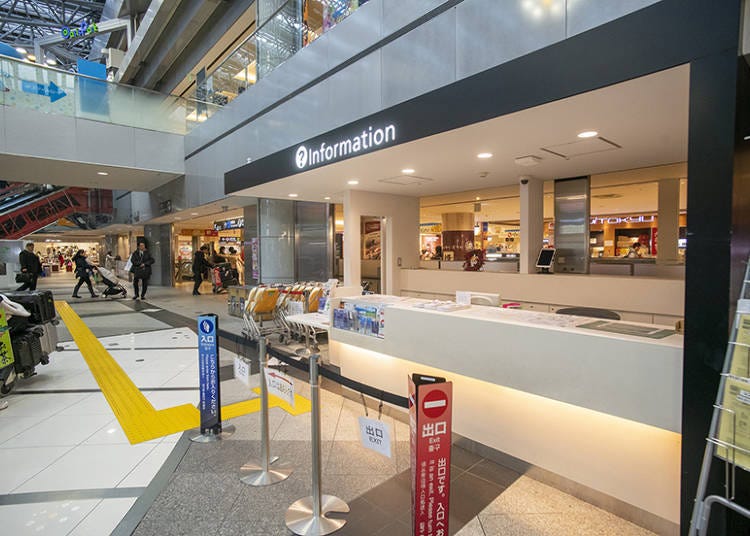 There’s also an information center in the Domestic Terminal amidst the souvenir shops that can provide guidance.

Getting to Popular Hokkaido Tourist Spots from New Chitose Airport 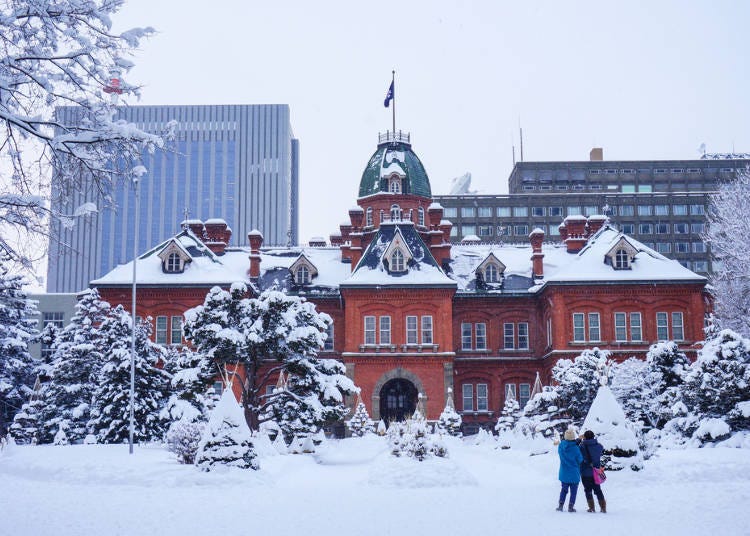 (1) Sapporo city center
Let's take a look at how to get to some of Hokkaido’s major sightseeing destinations using each method of transportation. First, Sapporo city center, the heart of Hokkaido. Getting to JR Sapporo Station by train, bus, and car is simple. (Transit times do not include time required for transfers. Please check in advance because departures may be infrequent.) 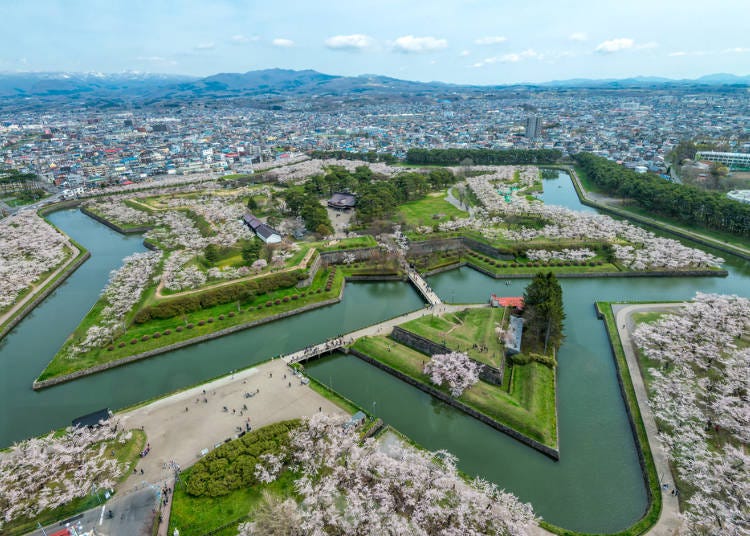 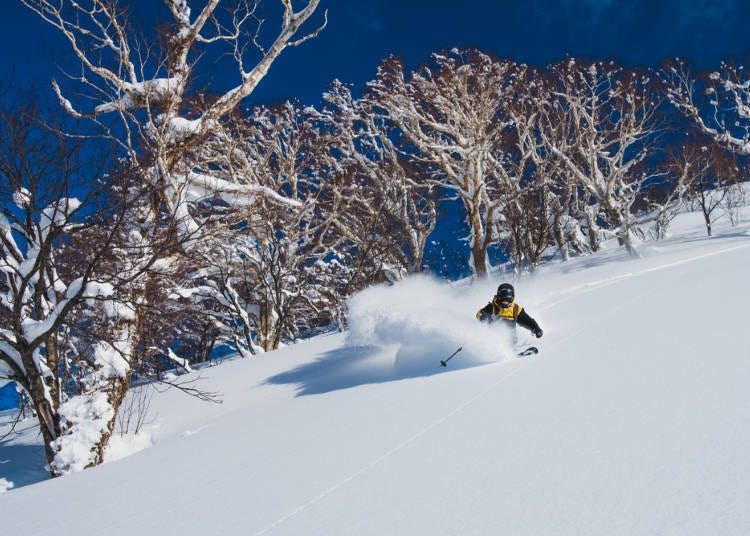 (3) Niseko
Niseko is a popular skiing destination. Here’s how to get to the Niseko Grand Hirafu resort, including the convenient winter-only ski bus. 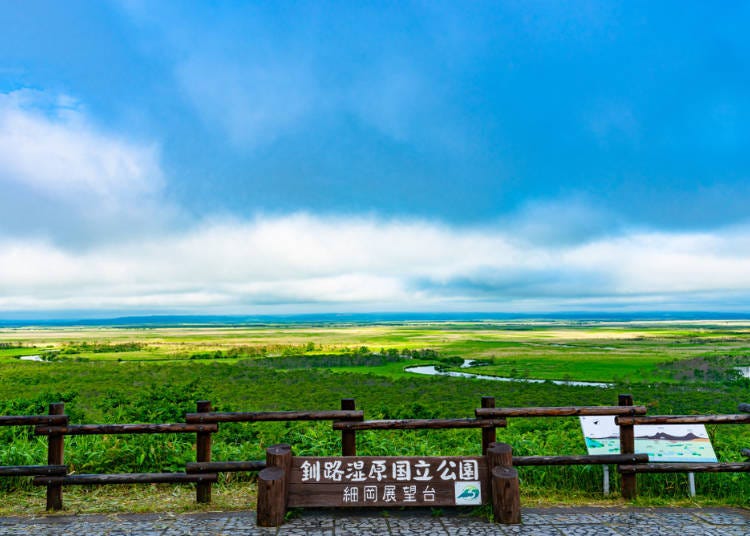 Kushiro Marsh has magnificent natural scenery. The wetlands are vast, so here are directions to the Kushiro Marsh Observatory on the west side. Again, no direct bus service is available from the airport; transit via Sapporo is required.

New Chitose Airport is just the first step in Hokkaido sightseeing. By choosing the right means of transportation from there, you can reach to your chosen destination faster and cheaper for a more enjoyable and fulfilling trip!

Budget Travel: Top 6 Unlimited Bus & Train Passes to Travel Hokkaido!
Ultimate Guide to Sapporo Station: Lines, Sightseeing, Shopping and More!
*This information is from the time of this article's publication.
*Prices and options mentioned are subject to change.
*Unless stated otherwise, all prices include tax.