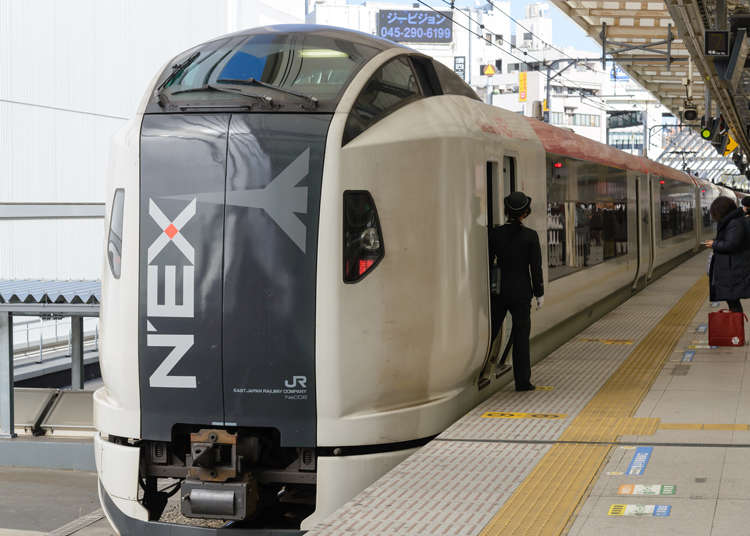 Easiest Ways How to Get From Narita Airport to Shinjuku, Tokyo! Find the Way That Best Suits You

“How do you get to Narita Airport from Shinjuku?” More than a few find themselves at a loss as to how to go because there are so many different ways to get there.

This is especially true for Shinjuku Station which is serviced by so many different lines that safely getting to Narita Airport can be a bit nerve-wracking. And if this is your first trip to Japan, you don’t need that extra worry. So in this article we will show a number of different ways for getting to Narita Airport from Shinjuku together with their strong and weak points. Find a way that best suits you. 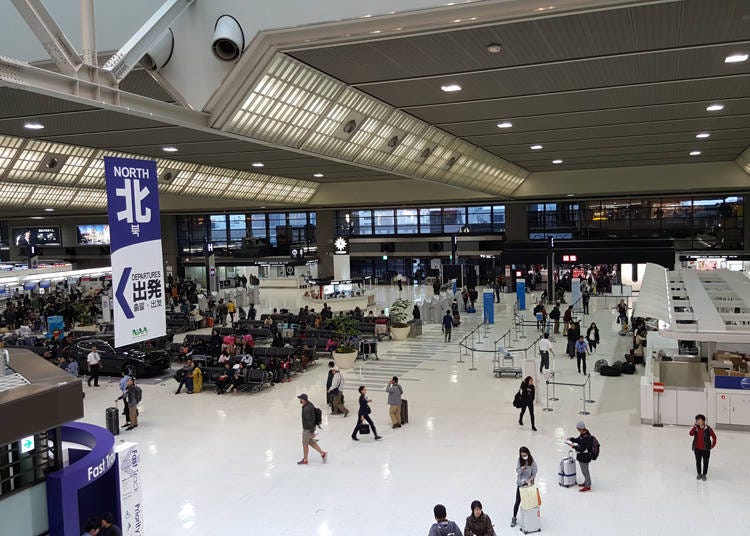 Image: Narita Airport is the largest in Japan（Lon U / Shutterstock.com）

Ways to get from Shinjuku to Narita Airport

As the crow flies, Narita Airport is located about 63 km east of Shinjuku and there are three main modes of transportation to get there: train, limousine bus and taxi. We’ll explain the time it takes, the fares, and how to purchase the tickets for each.

Getting to Narita Airport by train

There are two ways to get to Narita Airport by train: using the Narita Express or using conventional lines such as the Keisei Skyliner and Keisei Main Line.

The Narita Express has direct access from JR Shinjuku Station to JR Narita Airport Station, so this is recommended for those who do not want to transfer. Conventional trains such as the Keisei Skyliner and Keisei Main Line have transfers, but if you want to enjoy Japanese trains, this is the recommended way to go. 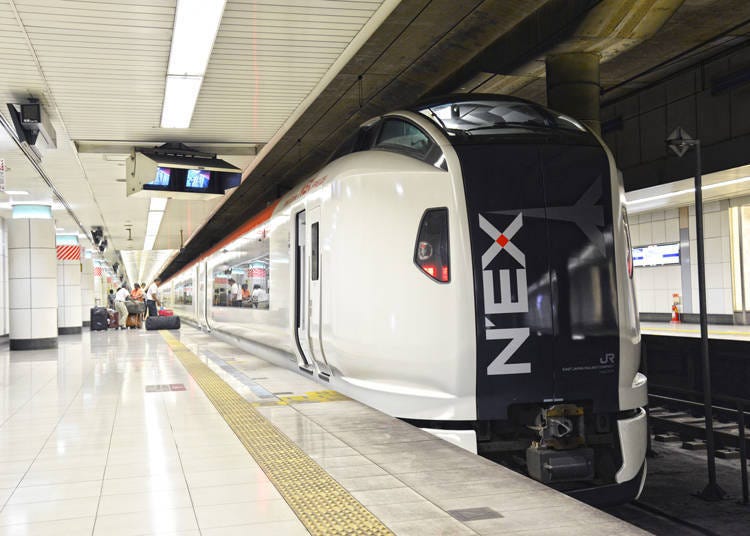 It has the advantage of easy access to Narita Airport Station, but also has the disadvantage of higher fares - unless you are using a Japan Rail Pass.

The seats have movable headrests and are reclining, plus they can easily be rotated making for a comfortable ride. In addition, all seats are equipped with a large table and an outlet that can be used for a personal computer, which is very convenient for those who want to work while during the ride.

LCD screens in the carriages show destination information and news in four languages (Japanese, English, Chinese, and Korean), which is convenient even if you do not understand Japanese.

From the above, you can see that the Narita Express is equipped with facilities that were designed with foreign tourists in mind. 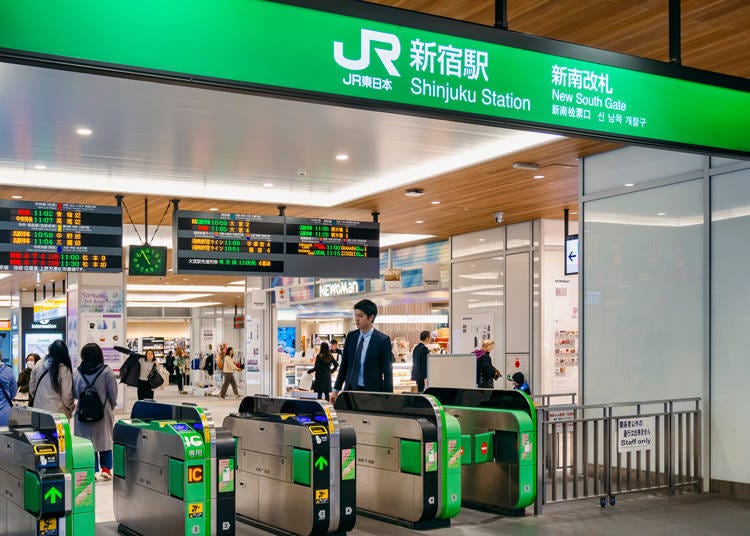 Travel time is about 1 hour and 20 minutes from Shinjuku Station to Narita Airport and the fares are 3,250 yen for regular coach and 4,820 yen for Green Car coach.

It is ideal for those who are in a hurry or want to go to Narita Airport without having to change trains.

Purchasing tickets for the Narita Express

There are two ways to purchase tickets.

1. Internet
Tickets can be purchased on the Eki Net reservation site operated by JR East. If you select ticketless when making your purchase, you will have the added benefit of a 200 yen reduction in the fare price.

2. Ticket counters
Tickets can be purchased at vending machines for reserved seats in the Midori no Madoguchi and View Plaza ticket offices located in stations and also at travel agencies.

Route 1
Take the Yamanote Line from Shinjuku Station to Nippori Station and transfer there to the Keisei Skyliner bound for Narita Airport.

Route 2
Take the Yamanote Line from Shinjuku Station to Nippori and transfer there to the Keisei Main Line bound for Narita Airport.

Although it has the advantage of having lower fares compared to the Narita Express, it has the disadvantage of you possibly becoming lost if you are not used to trains because you have to change trains at Nippori Station. However, if you walk so that you do not lose sight of the signs inside the station, you will be less likely to get lost. 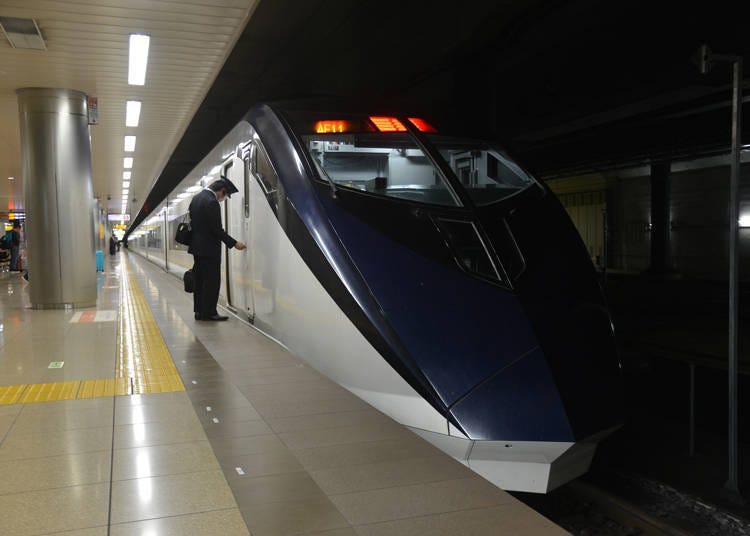 This will get you to Narita Airport a little earlier and more cheaply than using the Narita Express.

Purchasing tickets for the Keisei Skyliner 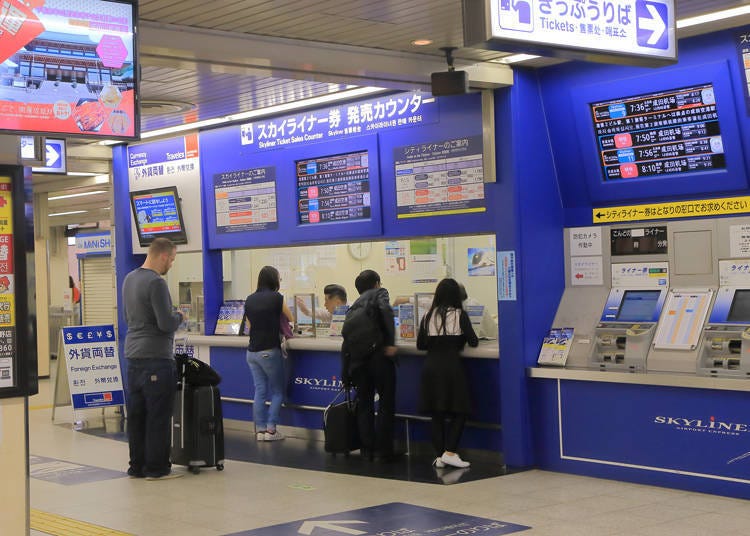 There are four main ways to purchase tickets.

1. Internet
You can also reserve seats using PCs or smartphones. The fare for Skyliner tickets must be paid at counter vending machines or at a convenience stores (FamilyMart) at which time you will receive the tickets.

3. Telephone
By calling the ticket reservation center, you can make a reservation for one month to two days before the boarding date. Please note that tickets can only be obtained at the Keisei Ueno Station window (between 9:00 a.m. and 6:00 p.m.) and the ticket pick-up period for reserved seats is set as follows.

4. Ticketless
A service that replaces the Skyliner ticket using a smartphone screen. The advantage is that you don't have to redeem your tickets or worry about losing them. You can pay by credit card or various ID payment services by accessing the Keisei Electric Railway site.

As for the route using the conventional line, this also goes from JR Shinjuku Station to JR Nippori Station on the Yamanote Line where you then transfer to the Keisei Main Line.

Although it takes more time, the fare is less than half the price of using the Keisei Skyliner, so it is a recommended access method for those who want to spend as little as possible. 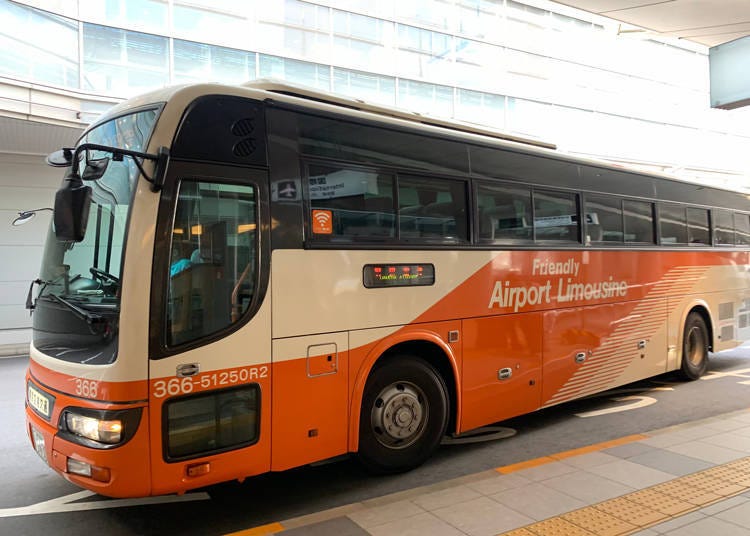 You can also reach Narita Airport by limousine buses which depart from major stations and hotels in central Tokyo.

You are certain to be able to get a seat due to its limited seating capacity system and it is also possible to store large luggage items on the bus. Also, most of the buses are outfitted with toilets. Free Wi-Fi is also available, so you can spend a very relaxing time on the bus.

One of the advantages of the limousine bus is that it departs from hotels around Shinjuku Station, so if you are staying at a hotel, you do not need to go to the station which is convenient; buses are available between the early hours of 4:00 a.m. to 2:00 a.m. in the middle of the night.

One disadvantage is that you may not be able to reach Narita Airport on time due to road conditions. It is important to allow extra time for such contingencies. 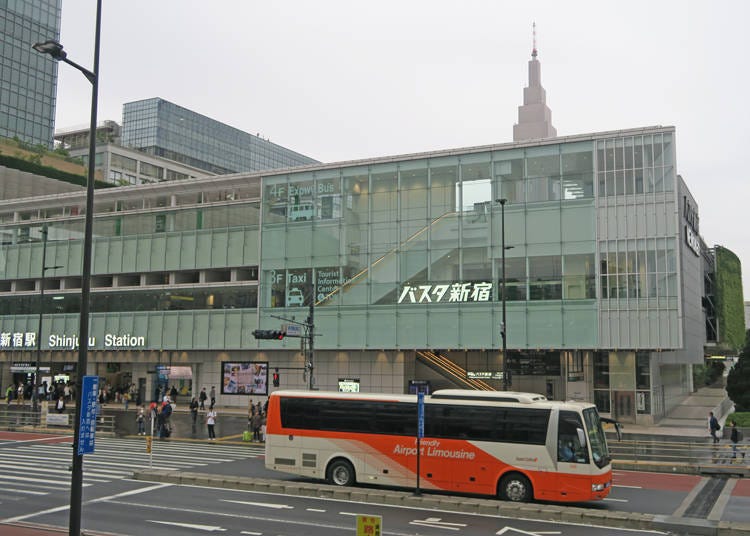 The buses arrive at the departure lobbies of Narita Airport Terminal 1, Terminal 2 and Terminal 3, so you can go directly to the check-in counter.

The journey normally takes about 1 hour and 40 minutes and the fare is 3,200 yen.

There are two ways to make a reservation.

2. Telephone
It is possible to make a reservation by telephone.

If going by taxi, a flat-rate taxi is recommended 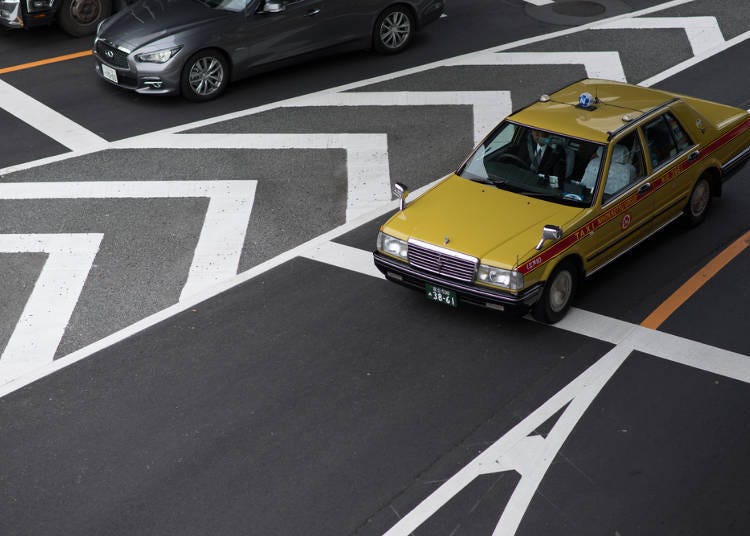 A flat-rate taxi is a service that allows you to go from an area in Tokyo to Narita Airport at a predetermined fixed fare. It is difficult to know exactly what the fare will be when using a regular taxi, so with a flat-rate taxi you do not have that worry.

However, taxi fares are more expensive than other modes of transportation and should be considered as a recourse only when trains and limousine buses are not available.

You need to make a reservation for a flat-rate taxi by telephone. Reservations can be made one month in advance and must be booked at least one hour before use. 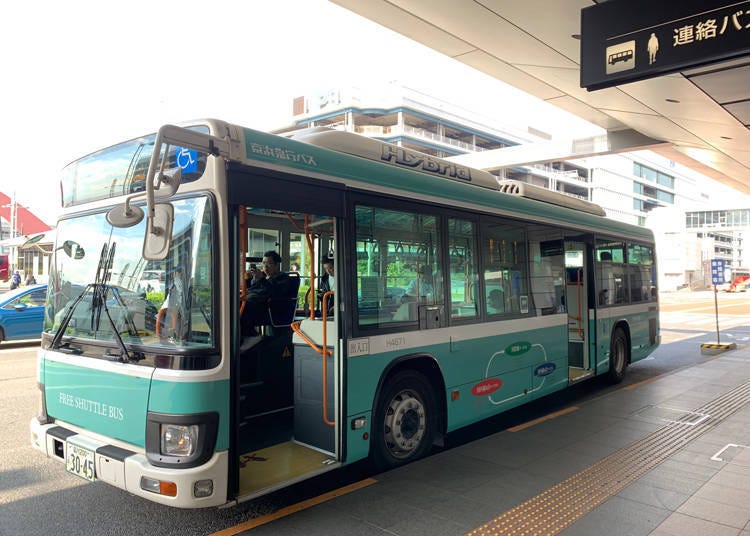 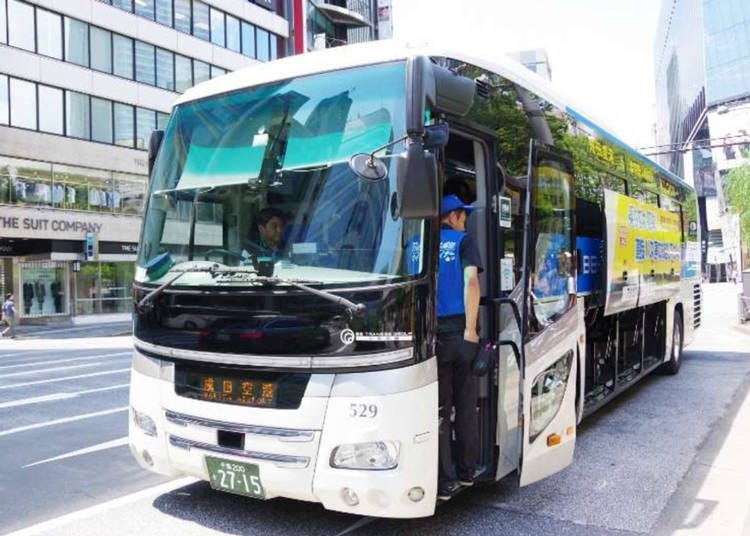 In that case, take the JR Chuo Line from Shinjuku Station to Tokyo Station and board either the Tokyo Shuttle or The Access Narita.

Tickets for the Tokyo Shuttle can be purchased at the Keisei Express Bus Lounge near Tokyo Station or on the website.

List of direction types from Shinjuku to Narita Airport

Shinjuku Station is likened to a maze which can make it especially confusing for first-time visitors to Japan who may have trouble knowing what is the best way to get to Narita Airport. Read this article to find the right access method, prices and booking options that are best for you.

* The information in this article is based on that as of December 2019).