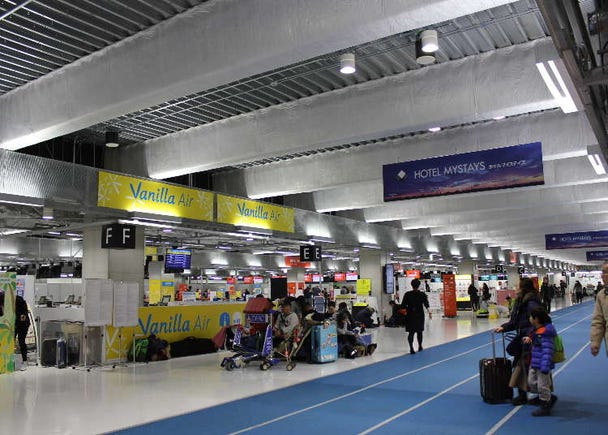 You want to send a package home because otherwise your luggage would be too heavy? You want to do some last-minute duty-free shopping? You have a few Japanese yen left and want to spend them on something nice? Fret not, because we have answers to all questions you might have about Narita Airport (NRT)!

Both Terminal 1 and 2 have their own post offices, but Terminal 3 does not. We recommend using the post office at Terminal 2. The fastest and most commonly used shipping service is EMS (Express Mail Service) that sets its rates by weight, slightly differing by region. For example, a package weighing 3kg will cost you around 6,000 yen for North America and Europe, taking about a week. If you are not in a hurry, shipping by sea is a cheaper alternative, but it will generally take anywhere between one and three months.

Several mailboxes are installed throughout the departure lobbies of all terminals. If you’d like to send a postcard before boarding your flight, you can easily buy stamps at post offices and convenience stores in the airport. However, please note that the mailboxes themselves can only be found before the security screening. 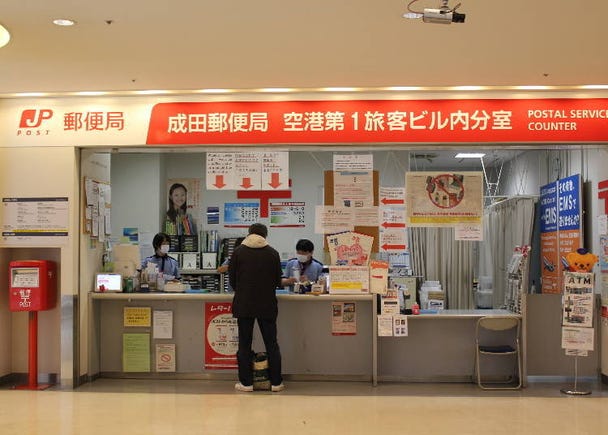 The post office on Terminal 1 can be found on the 4th floor, amidst shops and restaurants and near the central escalator. Send both mail and luggage from here! The shipping fee can only be paid in Japanese yen and in cash, however, there’s an ATM just nearby. You’ll also be able to find commemorative stamps here. 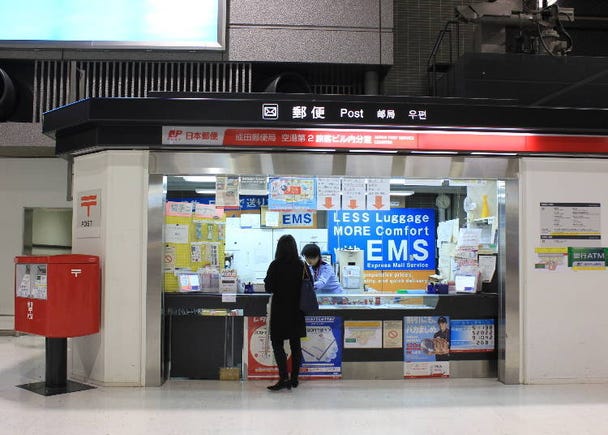 The post office of Terminal 2 is on the same floor as the check-in counters. Payment is accepted in Japanese yen and cash only.

Mailbox - Next to the departure gates of the north and south wings of the Departure Lobby on the 3rd floor. Also near the central exit of the Arrival Lobby on the 1st floor.

Terminal 3
Post Office – None. Head over to Terminal 2 instead.
Mailbox - Near the food court on the 2nd floor. Stamps can be bought at the terminal’s Lawson convenience store.

Q2 – I Still Have Japanese Yen Left. What Can I Buy? 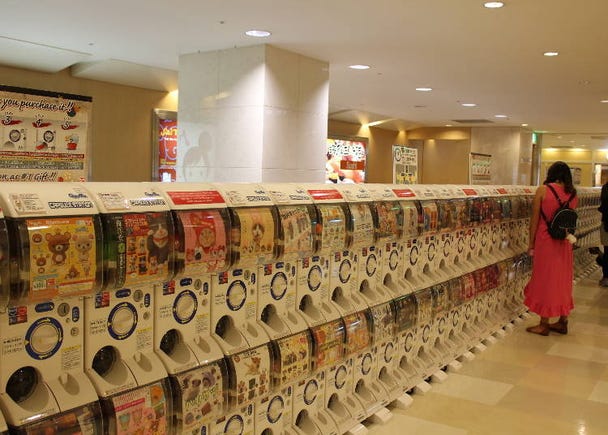 Buying sweets at a convenience store is always an option. However, you might also want to spend your last coins in a gatcha machine, the toy capsule vending machines that have become quite popular with people from all over the world. You can easily get a last-minute souvenir in the shape of an anime character or little animal here, mostly in the forms of badges or keychains to fancy up your bag or smartphone! 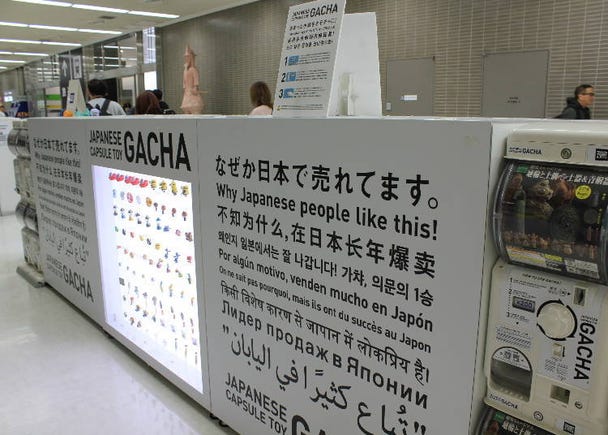 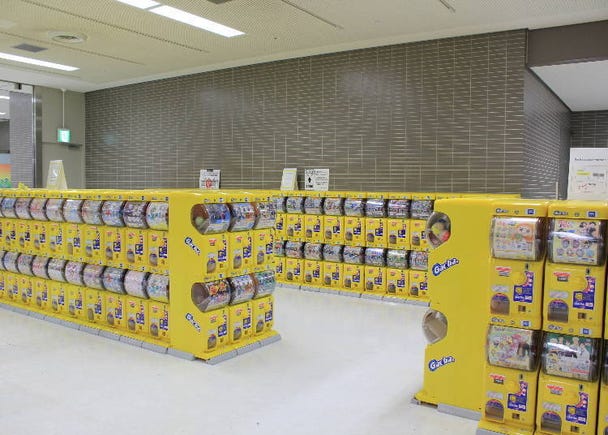 The capsule toy corner on B1F of Terminal 2 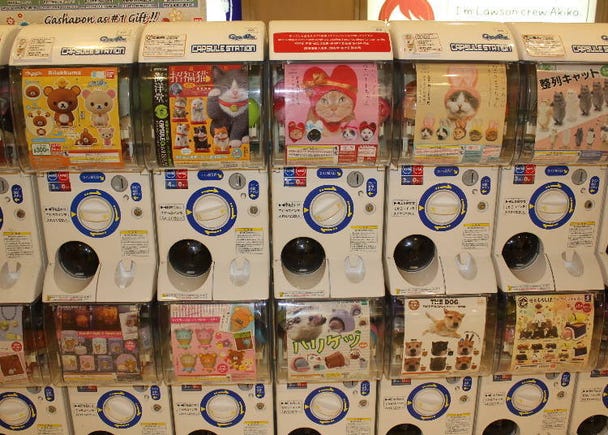 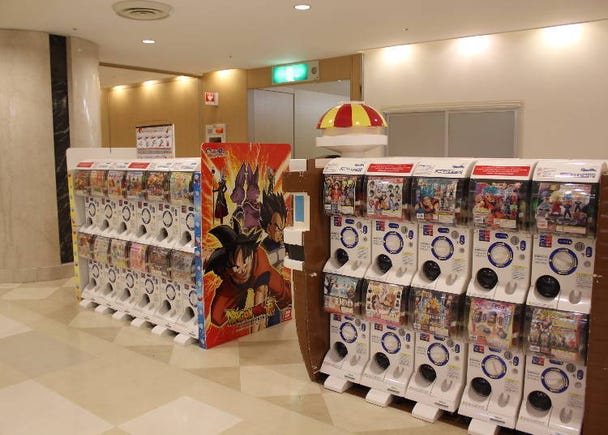 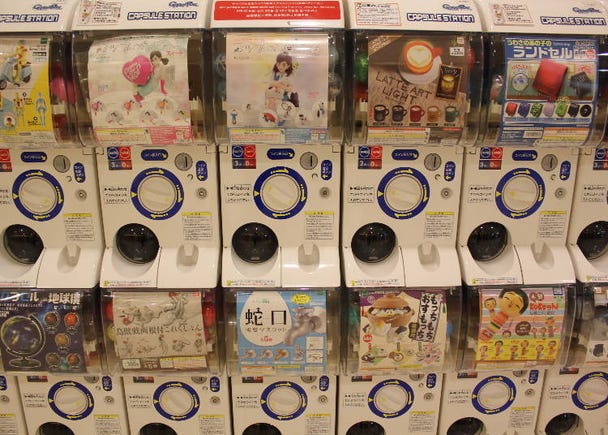 Capsule toys come in all kinds of shapes, even weird things like tiny school bags or faucets. One particularly popular gatcha goodie is “Cup no Fuchiko,” which can be hung from a mug or glass.

Q3 – It’s My Last Day and I Want to Sightsee. Where Can I Store My Luggage?

There’s a surprising amount of things to do around Narita Airport, such as visiting Naritasan Shinsho-ji Temple or going on a last shopping spree at Shisui Premium Outlet. If check-in isn’t open yet but you’d still like to go out and explore, you can use either coin lockers or luggage storing services to hold on to your suitcase.

1) Coin Lockers
Coin lockers are available in several sizes, able to store both large suitcases and carry-on luggage. Generally, there are two kinds of coin lockers: key type and password type. As soon as you put in the money, you’ll get a receipt with your password printed on, so make sure to keep it safe. The price for a coin locker is between 300 and 500 yen, depending on the size. However, there aren’t that many coin lockers on Terminal 1 and 2, so even vacant lockers usually get taken immediately. Should they be full, you can always use the baggage storage service. Since there’s no such service on Terminal 3, it also has coin lockers installed at four different locations. 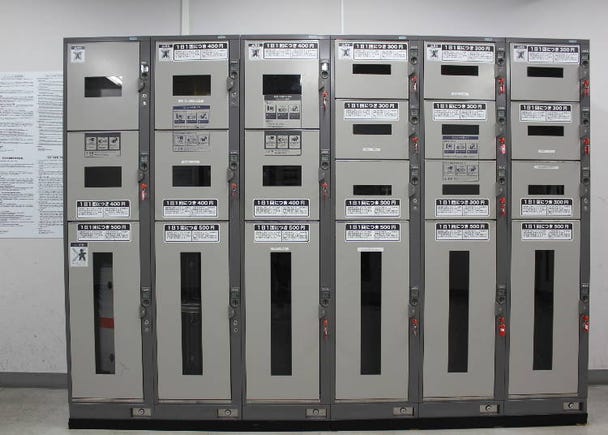 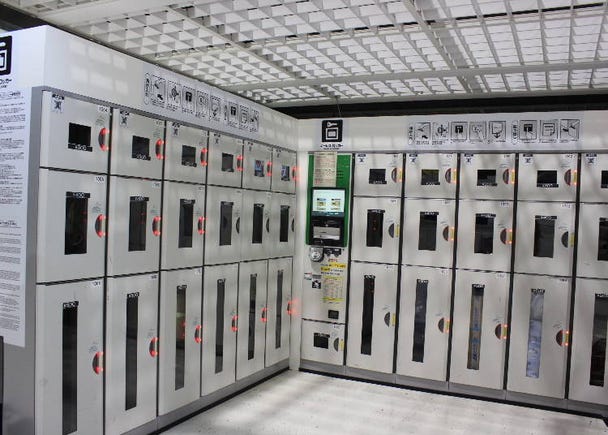 Password-type lockers at Terminal 2. Note that the receipt is retrieved not at the locker directly but at the terminal in the middle. You can also pay with Suica or other such cards.

Terminal 1 Located on B1F, near the visitor center on the 1st floor of the Arrival Lobby, as well as on the north and south wing of the Departure Lobby on the 4th floor.
Terminal 2 Located on B1F and the 3rd floor of the Departure Lobby. On B1F, they are next to the gatcha (capsule toy) machines, while there is one coin locker location on the north wing of the 3rd floor and two on the south wing.
Terminal 3 Located near the terminal’s exit and near the food court, with four locations in total. If you have trouble finding the coin lockers, don’t hesitate to ask.

2) Baggage storage
The baggage storage services come in handy if they coin lockers are full. The prices vary between large, medium, and small, but the general cost for a medium-size suitcase is 520 yen. You’re charged by how many pieces of luggage you hand in, so make sure to tie and stack the individual pieces together as best as possible. 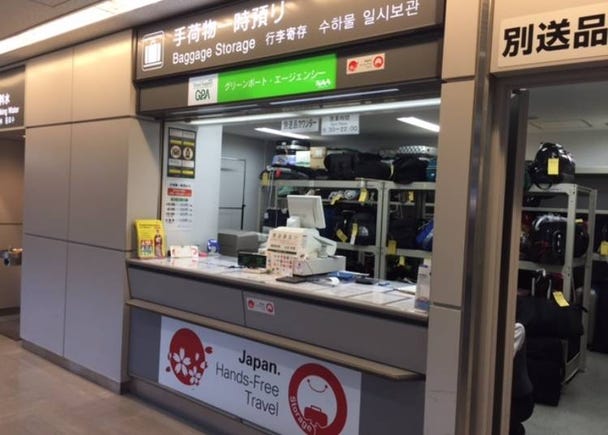 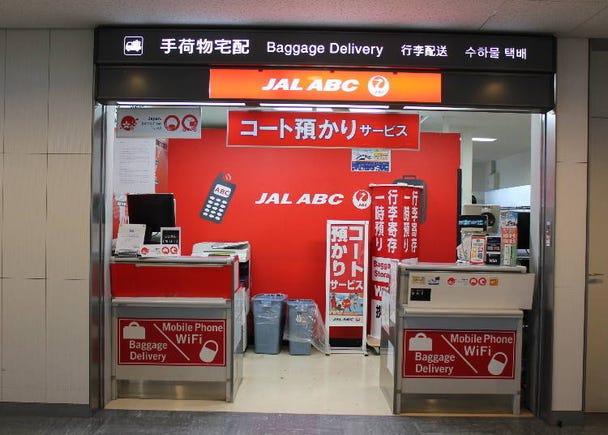 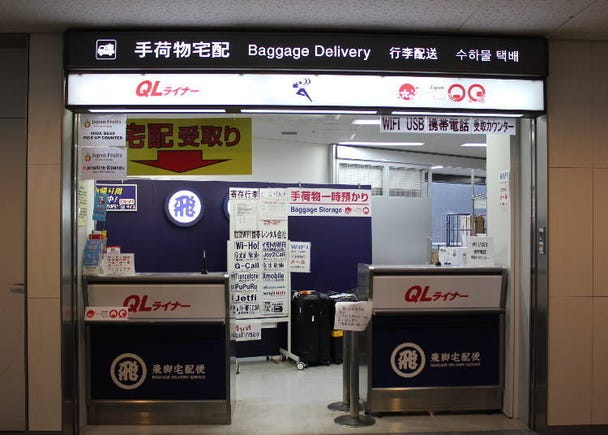 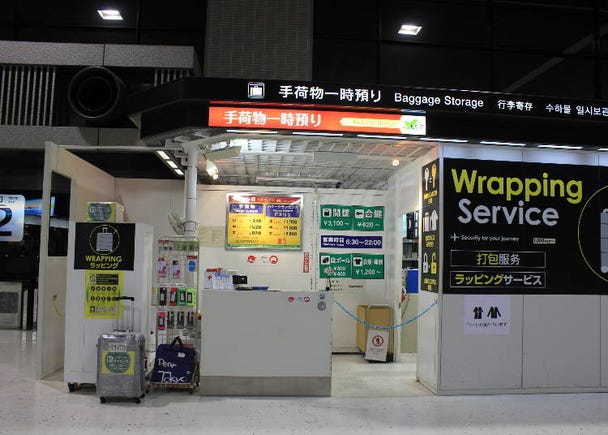 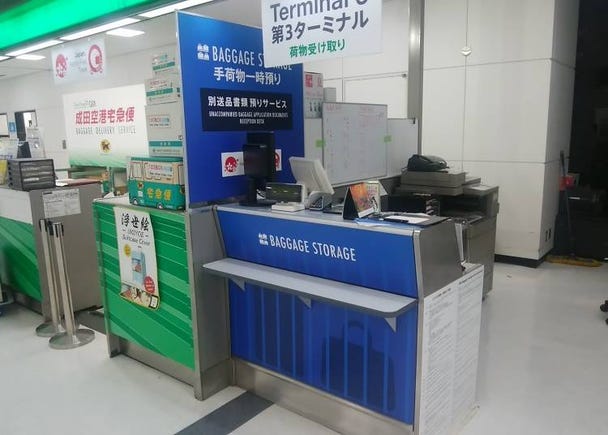 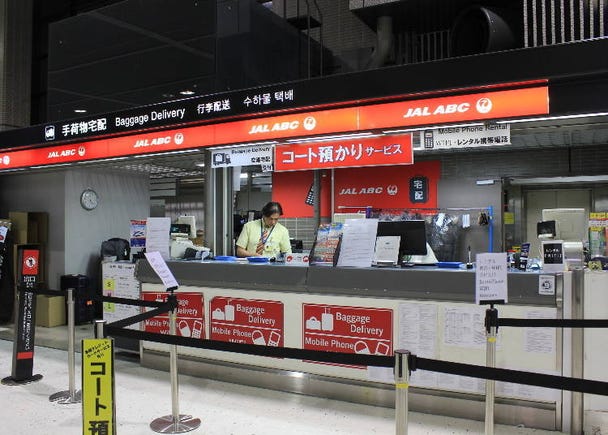 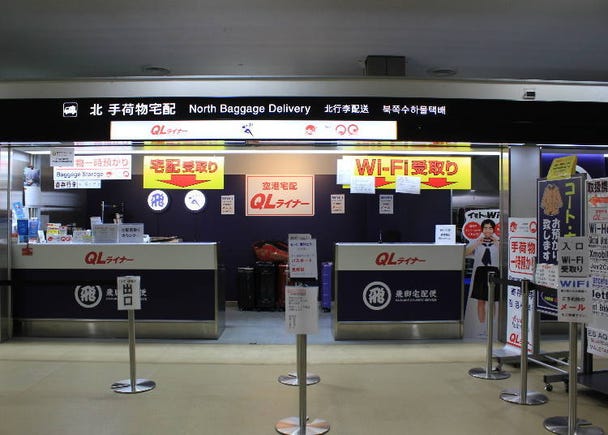 Terminal 3
There is no baggage storage service at Terminal 3. Look for coin lockers instead or head over to Terminal 3.

Q4 – I Used Bic Camera’s Airport Delivery Service. Where Do I Pick It Up?

Bic Camera’s airport delivery service is incredibly useful if you bought a bigger appliance but don’t want to carry it around. Such deliveries can be picked up at JAL ABC counters in the departure lobby of each terminal (see Q3 for details). Keep in mind that you need a receipt to pick it up. 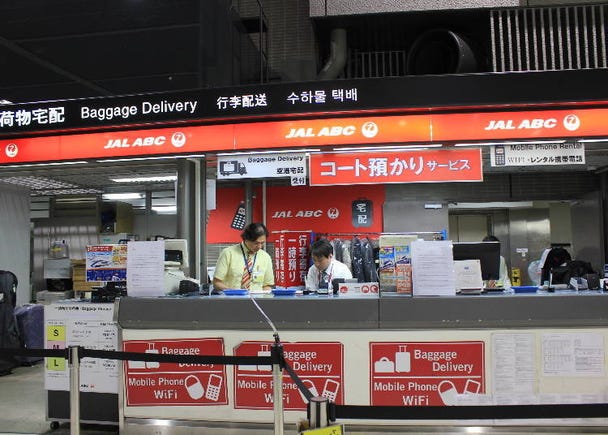 Look for the red signs

Get Straight Onto The Open Road With an RV!

Want to get straight out onto the open road from the airport? RV rentals are a great way to see a new side of Japan!
Use LIVE JAPAN's promo code below to get 5% OFF your rental now.
・Promo code: LiveJapan_coupon_01
・On the "Request for a Quote" page, enter the promo code to get your discount."