HOME Tohoku Miyagi Sendai And Matsushima Summer In Sendai: All You Need To Know When Traveling To Sendai Between June And August! 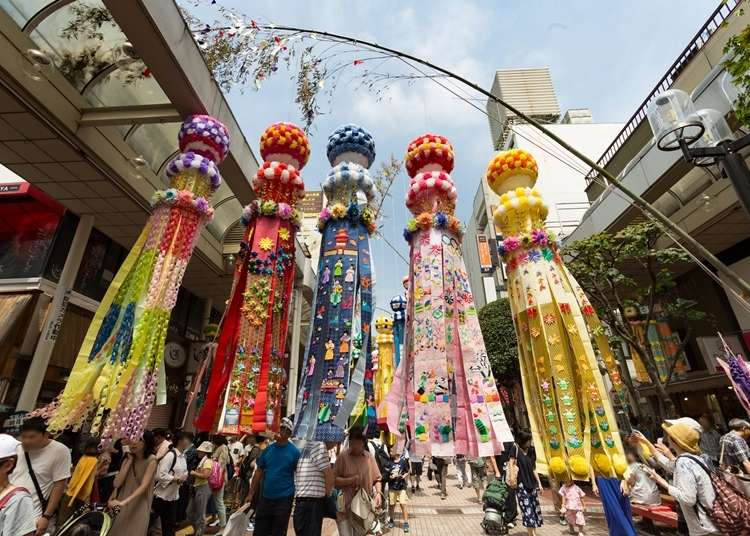 Summer In Sendai: All You Need To Know When Traveling To Sendai Between June And August!

Summer in Sendai and the rest of Japan's northeastern Tohoku region is cooler than many other areas of Japan. However, in recent years, there are many days when temperatures exceed 30°C (86°F) in July and August.

When traveling, it's hard to know what weather we'll be met by. That's why here, a local writer will suggest what clothes to bring to Sendai in summer, showing also the data from past years for comparison.

And let's not forget the sightseeing and events that Sendai's summer has to offer!

What kind of area is Sendai and what kind of climate does it have all year round? 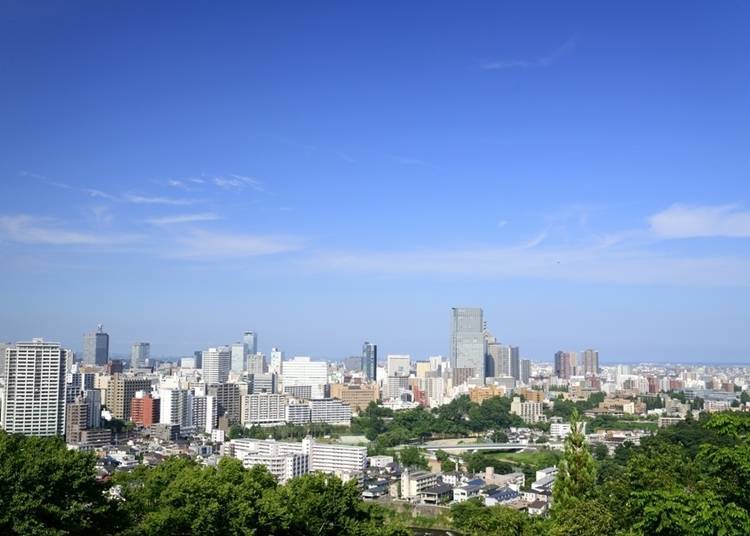 Sendai is the largest city in the Tohoku region. It's located on a plain beside the Pacific Ocean, and it's nice to visit because it's blessed by many sunny days. Also, compared to other Tohoku areas, Sendai is milder and has less snowfall. However, the cold sea breeze keeps it still pretty comfortable throughout the year.

Summer in Sendai is cooler than in Tokyo or Osaka, but the average temperatures have risen in the past years. It is not uncommon for temperatures to exceed 30°C during the day. Sendai's downtown is equipped with active public transportation, so make sure you make good use of it, especially on hot or rainy days.

What are the recommended sightseeing spots and plans for summer in Sendai?

When it comes to sightseeing in the summer months, we recommend spots where you can cool off.
Let's take a look at our recommendations for June, July, and August in Sendai. 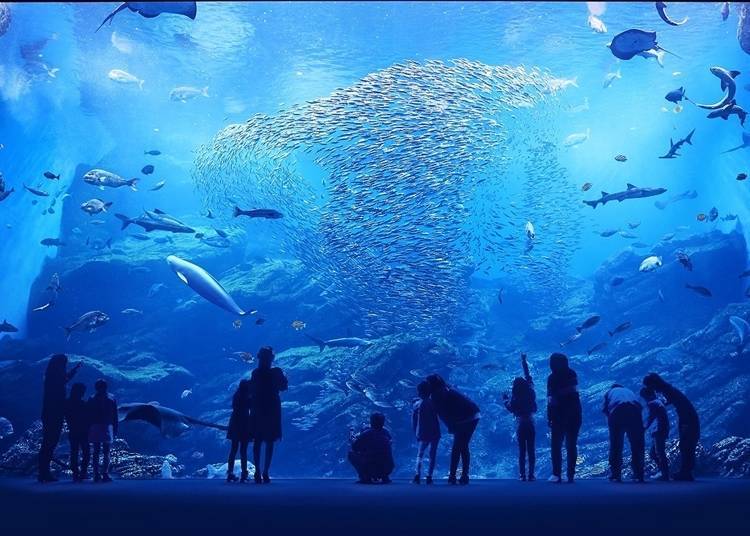 Rainy season in Sendai is from June to July, and days tend to be wetter than in other summer months. During this time, it's better to choose indoor destinations.

At Sendai Uminomori Aquarium, which is about a 25-minute drive from JR Sendai Station, the exhibitions are indoors and the stadium with dolphins and sea lions performances is also covered. There is also a free shuttle bus from JR Nakanosakae Station (you can get to the station in 18 minutes from JR Sendai Station on the Senseki Line).

The aquarium's highlight is Inochi Kirameku Umi, a homage to the sea of Sanriku. The sight of 20,000 fish belonging to 50 different species is humbling. In the large aquarium, a dynamic show is held three to four times a day, where you can see a large bank of sardines swimming together. Their path is overlaid with projection mapping and dramatic music creating a fascinating show.

Due to the effects of Covid-19, programs may be canceled, and the contents and schedule may be changed. 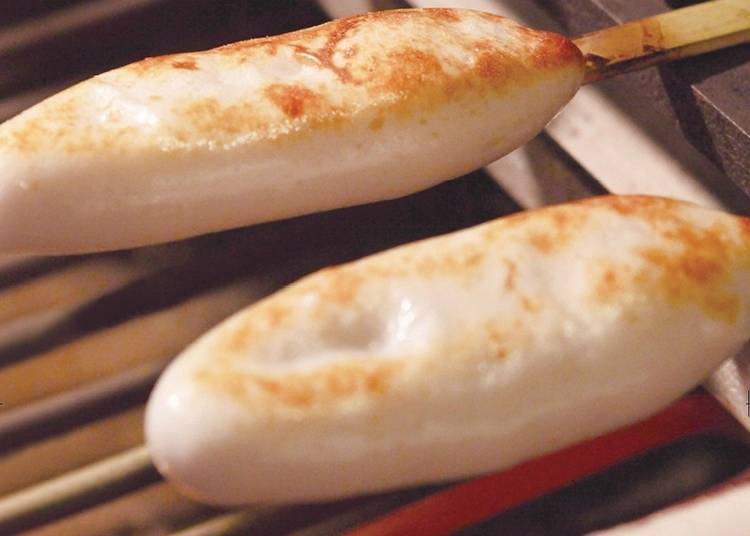 Nearby Sendai Uminomori Aquarium, you’ll also find the Kanezaki Sasa Kamakan, where you can experience the hand-made and baked local specialty Sasa Kamaboko, and the Kirin Beer Sendai Factory, which also has a restaurant where you can try a host of dishes that match perfectly with beer. Stop by after enjoying the aquarium.

June is during the rainy season, although the exact period changes from year to year. Since the temperatures are close to 20°C, the humidity is high and the air feels damp.

What should you wear in Sendai in June? 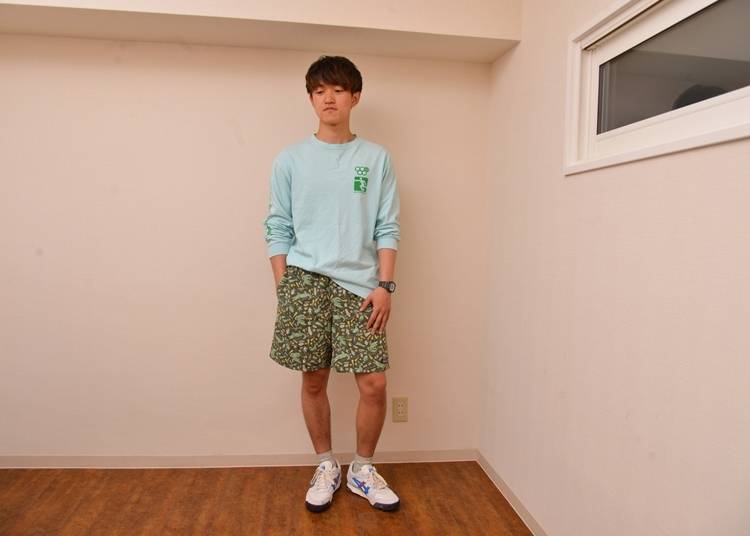 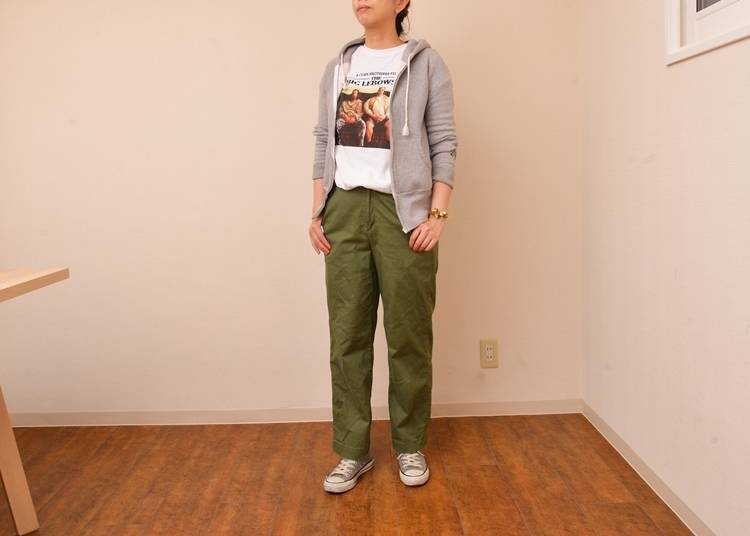 The average temperature in June is 18.5°C. The highest is 22.5°C, which is not very high, but it can get hot and humid if there is continuous rain. It's a good idea to wear light clothes, but something to put on in cooler environments (like air-conditioned indoors). It's also recommended to carry an umbrella, in case of sudden rain. 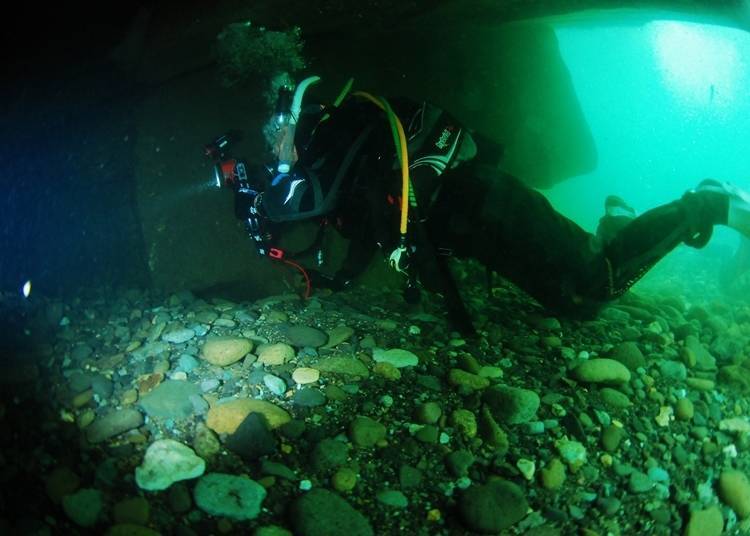 Enjoy diving at the famous waterfall Akiu Great Falls in July. Diving is generally done in the sea, but for this experience, you will dive into a basin. Feel the vibration and the roar of the water flowing down the basin of Akiu Great Falls—it’s an incredible experience. You can also see river fish, like Kawamutu and Yamame from up close.

Diving sessions at Akiu Great Falls are held from July to October every year. The fee includes equipment rental and transportation from JR Sendai Station.

In the Akiu Onsen area, where Akiu Great Falls is located, you can experience painting kokeshi dolls at Akiu Winery, which sells prefectural wine, and Akiu Village, a complex full of souvenirs. Don't miss resting at one of the hot-spring inns and enjoy the natural hot baths.

After the rainy season in mid-July, the weather is usually fine, and temperatures start rising. In recent years, the average temperatures in July have exceeded 20°C and the highest has been around 25°C. In some years, the temperatures were close to 30°C.

What to wear in July in Sendai 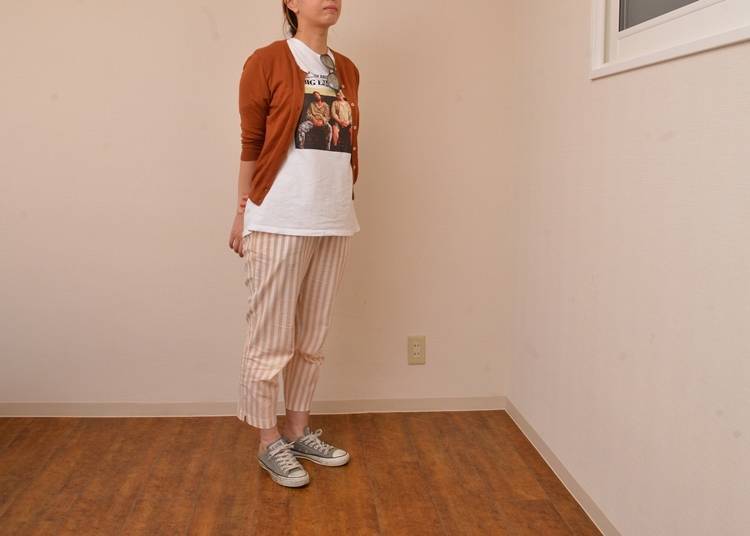 Tops with short sleeves and short pants are the way to go. If you're worried about sunburn or getting cold in air-conditioned locales, bring a light cardigan or use linen, which will keep your body temperature stable. 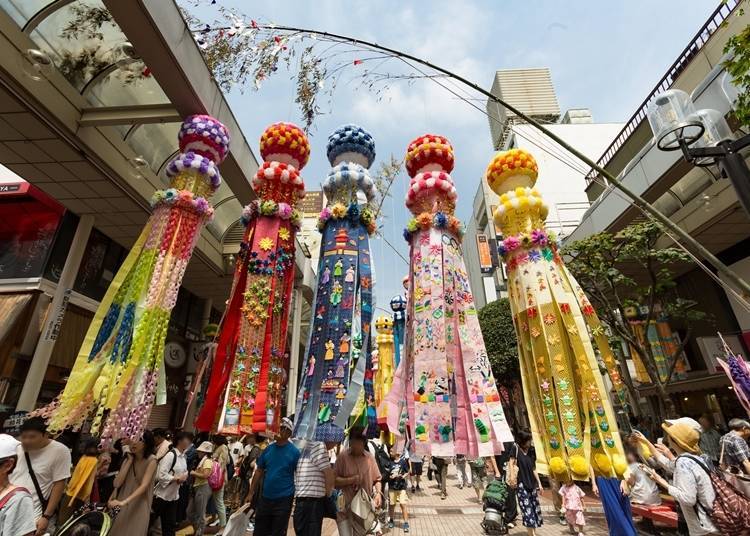 August is the month of Sendai's traditional Tanabata Festival. If you visit Sendai in summer, make time to see the festival. The Sendai Tanabata festival is held every year from August 6 to August 8. This festival was started by Date Masamune, the founder of the Sendai domain, to pray for the prosperity of the castle, and since, the streets are plastered with colorful decorations during those three days.

The festival's protagonist is a colossal windsock that flutters above the crowd—5 to 10 meters in length. One of the major traditional decorations is a bamboo tree adorned by five streamers, hand-made by locals. The main area of the festival is the so-called arcade town, but during the celebration days, Tanabata decorations of all sizes can be seen scattered in many areas of the city.

* The event in 2021 is undecided. Please check the official website for details. 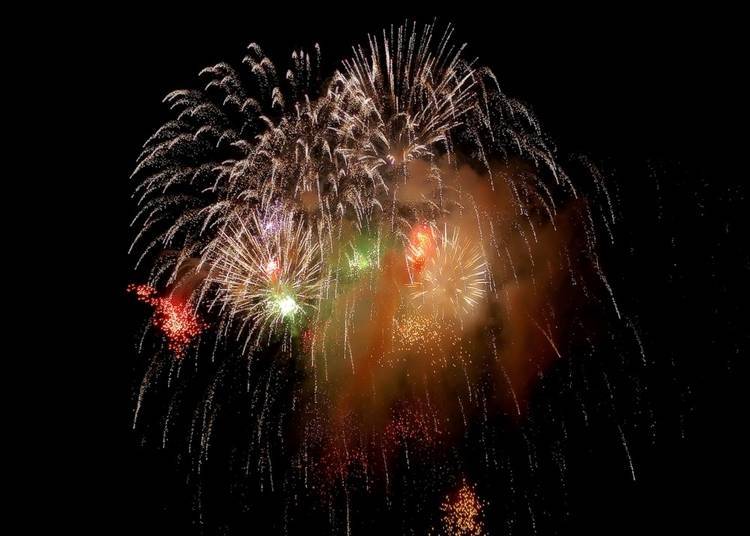 Also, on August 5, the day before the beginning of the festival, the Sendai Tanabata Fireworks Festival takes place. About 16,000 fireworks are set off. The recommended viewing spot is near Nishiki Park, right next to Jozenji-Dori. Look up at the beautiful fireworks while enjoying the street food typical of this time of the year.

*The event for 2021 has not yet been confirmed. Please check the official website for details

Recently, the average temperatures in August have been of 25°C or higher, and the highest ones have been often around 30°C. Sendai is often chilly in mornings and evenings, but in August, it will be hot all day long.

August in Japan is the month of typhoons. Although it's rare one hits Sendai directly, the weather often changes and worsens due to the influence of typhoons, so make sure to keep an eye on the weather forecast.

What to wear in August in Sendai 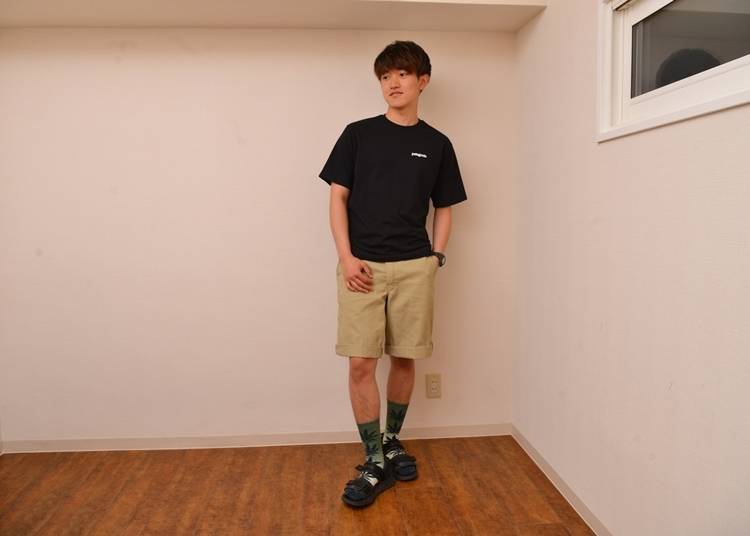 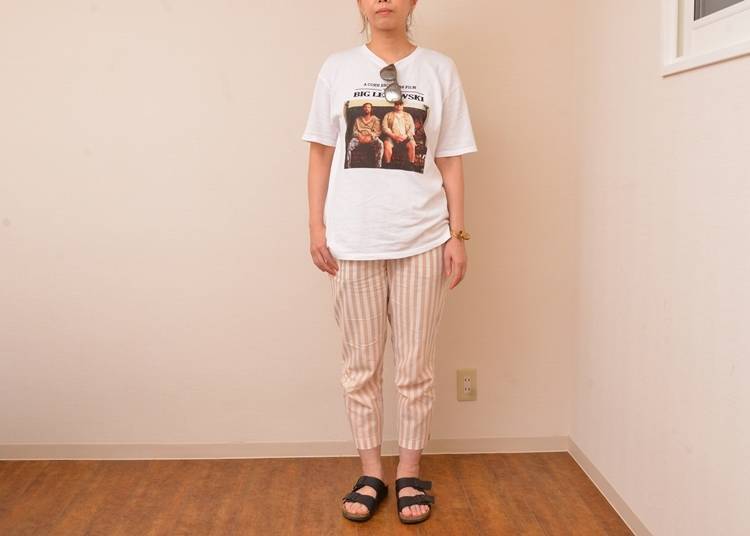 Like in July, light clothing will be your friend. To protect yourself from the strong sun, it's better to bring a hat and sunglasses, as well as sunscreen. An umbrella will be useful on both rainy and sunny days, and you'll easily find them in many drug stores and general stores.

Although summer in Sendai is not as heavy as that in the Kansai region, it can still be pretty hot, so make sure to take the appropriate measures against the heat and enjoy your sightseeing.

25 Best Things to Do in Sendai: Sightseeing, Attractions, Food and More!
Visiting Sendai In Spring: What You Need To Know If You Travel To Sendai Between March And May!
Sendai Weather in Autumn: Where to Visit and What Clothes to Bring On Your Next Fall Foliage Trip
Visiting Sendai in Winter: Weather, Clothes, and Everything You Need to Know For Your Trip!
*This information is from the time of this article's publication.
*Prices and options mentioned are subject to change.
*Unless stated otherwise, all prices include tax.