HOME Tohoku Miyagi Sendai And Matsushima Tohoku Fall Foliage: 10 Best Places for Autumn Leaves in Miyagi and the Best Times to Do So! 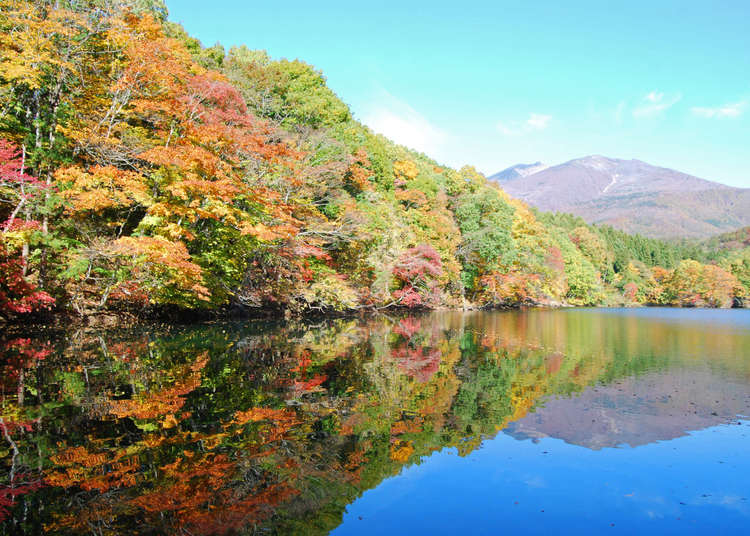 Tohoku Fall Foliage: 10 Best Places for Autumn Leaves in Miyagi and the Best Times to Do So!

Enjoying autumn leaves in Miyagi is magical. In fall, when many tree leaves turn into is a fundamental part of Japan's fall season, and where better to catch sight of their lovely hues than in Miyagi, a prefecture known for its closeness with nature and all the beautiful benefits it brings?

We've compiled 10 must-visit hotspots for autumn foliage within the prefecture into one handy list here for your convenience, including interesting places like impressive valleys and historical shrines. Hopefully, some of them will pique your interest!

1. Naruko Gorge: A V-shaped canyon covered in red and yellow 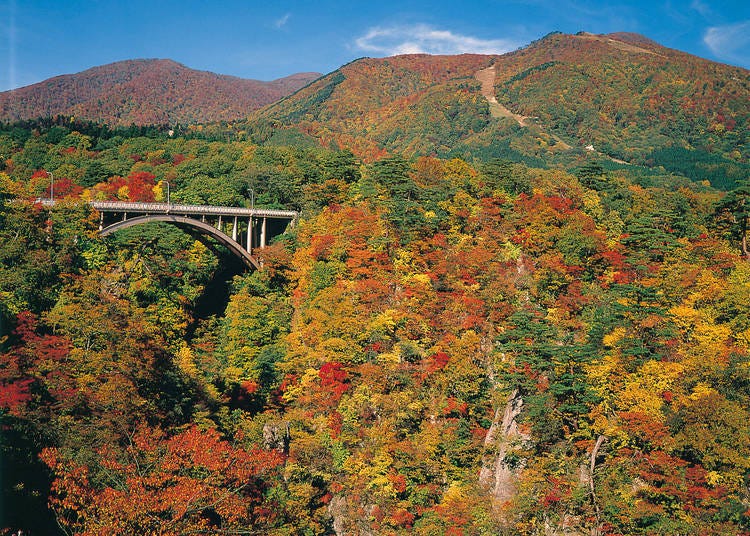 The famous Naruko Gorge is about a 10-minute drive away from Naruko-Onsen Station on the JR Lines and contains one of the most recognizable autumn foliage scenery associated with Miyagi.

Late October to early November is the best time to visit Miyagi to catch sight of the gorgeous autumn foliage on display here. The valley - filled with the canopies of colorfully vivid beech and maple trees - is about 2.6 kilometers (1.61 miles) long and 100 meters (328 feet) deep.

A great view of these autumn leaves in Miyagi to visit is the observatory platform found on the premises of Naruko Gorge Resthouse. Here is where you can admire the valley's landscape, which comes with a curious bridge peeking out between the foliage for a harmonious picture of verdant nature and modern architecture.

Book now: Feel the energy of nature and hot springs at Naruko Onsen 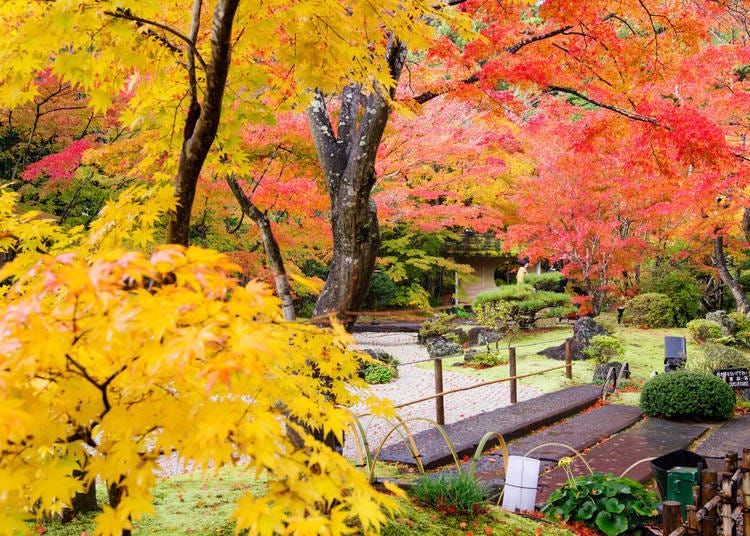 Matsushima City is another destination with plenty of popular autumn leaf spots for visitors of Miyagi, foremost among which is Entsūin, a temple that was founded in 1647. It is a very accessible 5-minute walk from Matsushimakaigan Station on the JR Lines. The four gardens within temple grounds have been designed with traditional Japanese aesthetics in mind. 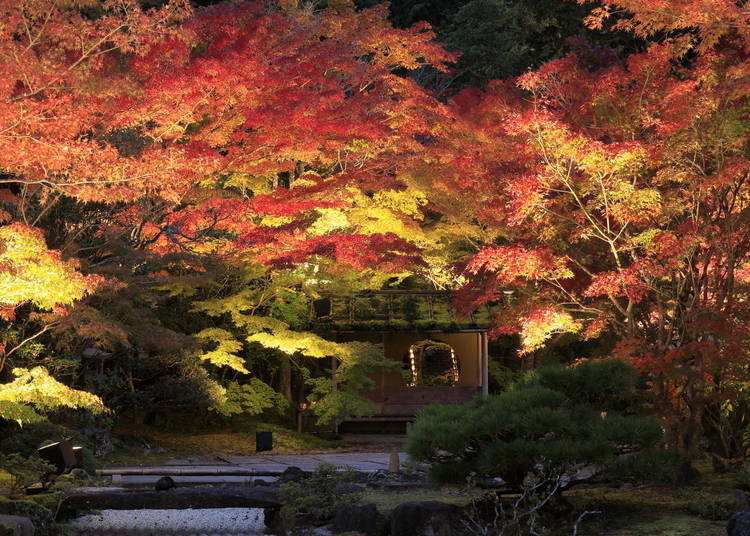 The best time to visit Matsushima for autumn foliage is between late October to mid-November. During this period, the temple gardens will be illuminated at night as well, which adds a touch of dramatic flair to its already audacious appearance. The must-see scene here is the sight of red maple leaves dangling upside-down as they are reflected on the clear and tranquil surface of the temple's Shinji Pond.

3. Mount Kurikoma: AKA The Carpet of God 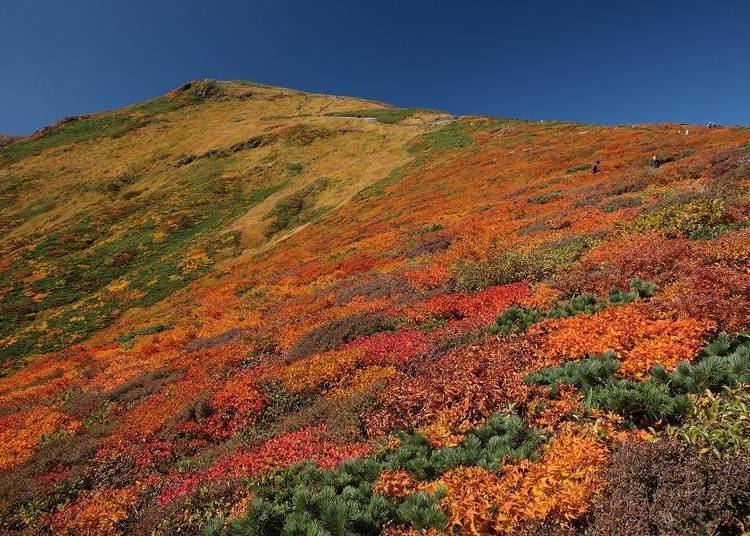 The massive Mount Kurikoma straddles the prefectures of Miyagi, Iwate, and Akita. The impressive layers of red, yellow, and orange autumn foliage here mainly consists of beech and rowan tree leaves, and this breathtaking view can be enjoyed from mid-September to mid-October. So strikingly beautiful is the scene when autumn is in full swing that the mountain has been fittingly dubbed, "The Carpet of God", making it among the most popular places for autumn leaves in Miyagi.

To trek up the mountain, new hikers can use the relatively easier route that starts from Miyagi, known as the Iwakagami Daira Trail Entrance, which can be reached in about 1.5 hours by car from Kurikoma-Kogen Station on the Tohoku Shinkansen. You can also hop on a shuttle bus from the station during weekends and public holidays that fall between the end of September to early October. 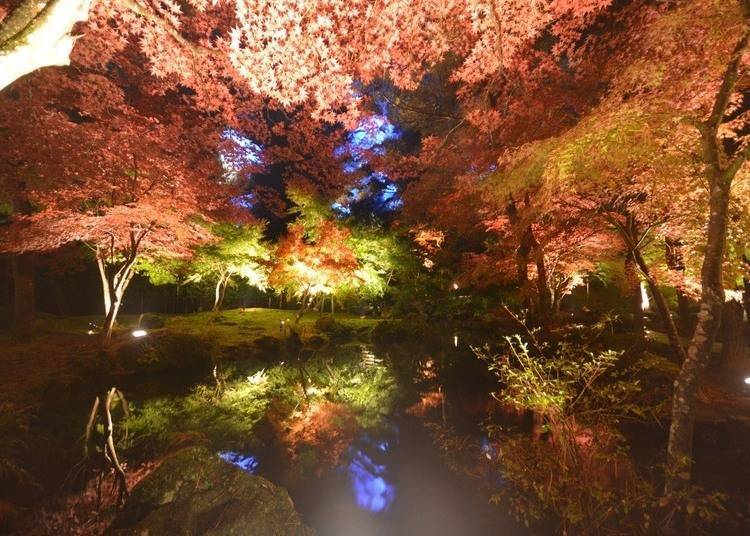 This nature park is located in the Akiu hot spring area on the outskirts of Sendai City, and a light-up event is held here every fall season. The mystical mood it evokes draws throngs of tourists and sightseers to the city every year.

The light-up event features lights and illuminations that evolve year-by-year through collaborations with local facilities such as glasswork factories or the Sendai Kaleidoscopes Art Museum. In fact, it once won second place in the event category of [d]arc awards, an awards ceremony celebrating the best in lighting design from around the world. 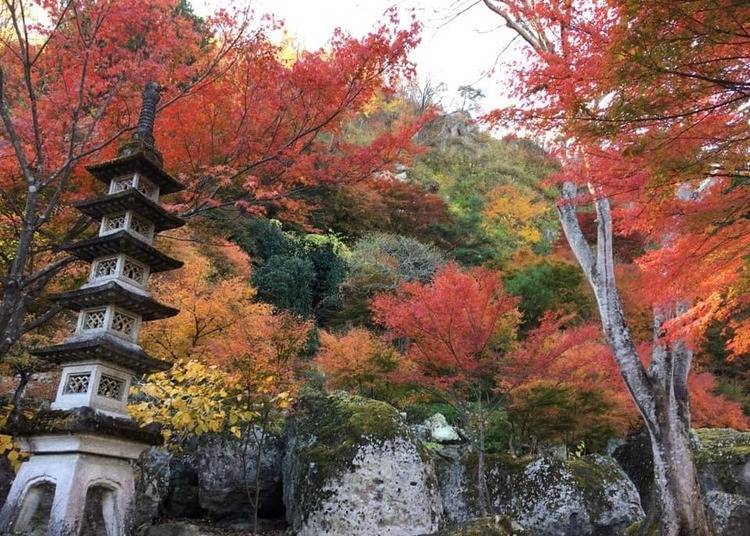 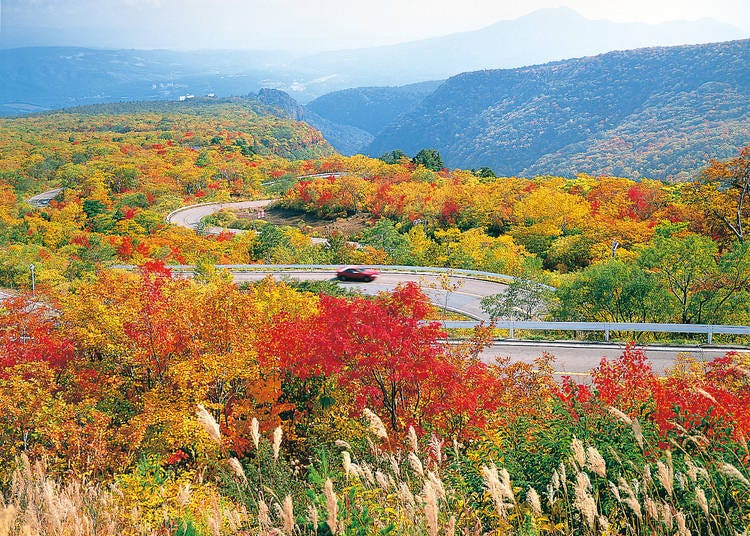 If enjoying the autumn leaves in Miyagi from the comfort of your rental car is your kind of tourism, then absolutely plan for a road trip down Zao Echo Line, which is a sightseeing route that cuts through the Zaō Mountain Range from east to west.

Along the way, you'll pass by interesting areas such as the emerald green volcanic crater lake Okama; Takimidai, a platform where you can admire three different waterfalls from a safe distance; and the intimidating Fudō Myōō statue, amongst many other incredible places. This buffet of spectacular sights will enhance the beauty of the autumn leaves and add to your enjoyment.

Zaō's colorful fall leaves start turning red and yellow from the area near the mountaintop, and the period between late September to early October is the best time to catch them in their full glory here.

The coloring then moves down to the foot of the mountain, so mid-October to late October is the best time to see them at the base. It takes about 20 minutes by car to get to the entrance of the Zao Echo Line from Tohoku Expressway's Murata IC.

6. Akiu Great Falls: The beautiful marriage of autumn leaves and waterfalls in Miyagi 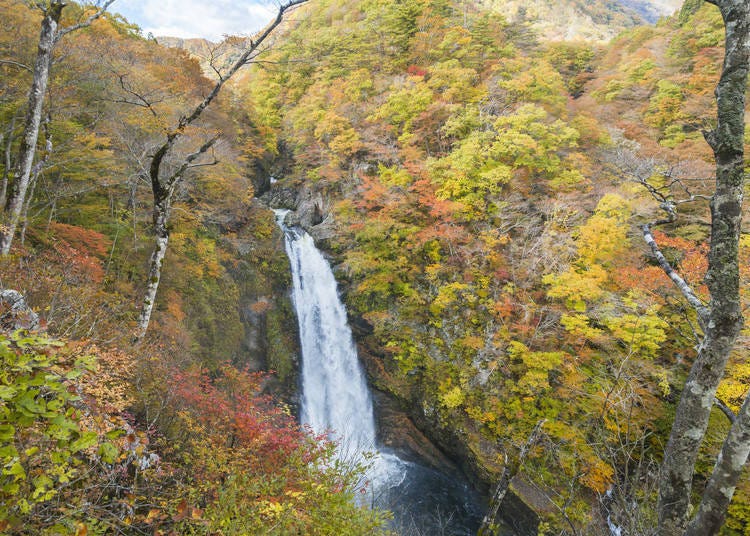 Akiu Great Falls is counted among Japan's three most famous waterfalls, and this is the best spot to enjoy the spectacular sight of a vigorous waterfall framed by various shades of autumn leaves.

The area comes equipped with a recreation trail with steps to bring visitors nearer to the waterfall basin so that they can personally experience the heart-thumping sensation of standing so close to one of nature's most powerful scenes.

It takes about 30 minutes to reach the waterfall basin from the large carpark on foot. Since the steps of the trail are located near the waterfall, they are often wet and slippery, so be sure to have a pair of comfortable walking shoes on.

The best time to enjoy the sights here is between mid-October to early November. To get to the large carpark of the waterfall, take a municipal bus bound for Akiu Onsen / Futakuchi from berth two of Ayashi Station on the JR Lines and disembark at the Akiuootaki bus stop.

A shuttle bus is also available only on weekends and public holidays from Sendai Station on the JR lines. Hop on the bus from bus berth 8 of the West Exit and get off at the Akiuootaki bus stop.

7. Lake Choro: The epitome of picturesque autumn leaves in Miyagi 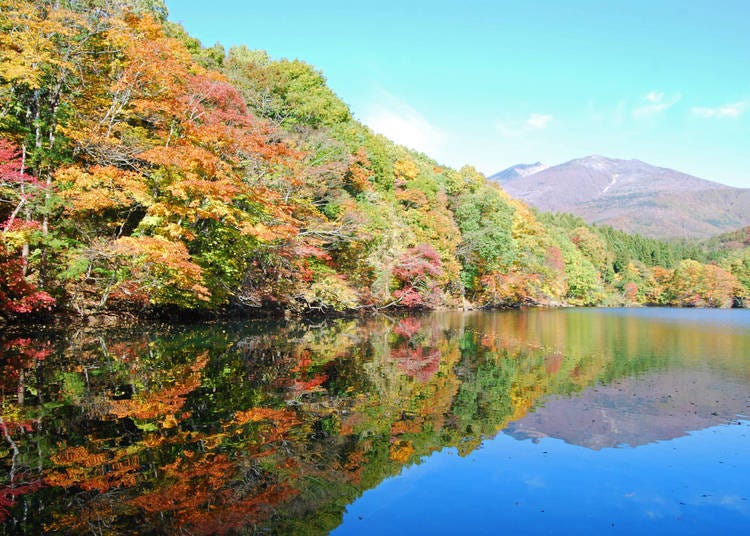 Lake Choro is a beautiful lake with a pristine blue surface that reflects its surroundings perfectly. During the fall season, therefore, when the surrounding beech, oak, and maple trees start donning their autumn leaves, the beautiful sight is reflected upon the lake's surface. This view is the very epitome of picturesque autumn leaves in Miyagi Prefecture!

Mid October to early November is the best time to catch this fantastical view. The most convenient way to get to Lake Choro is by car, but if you'll be using public transport, note that you'll have to transfer between buses that run infrequently, so be sure to include plenty of leeway in your schedule. 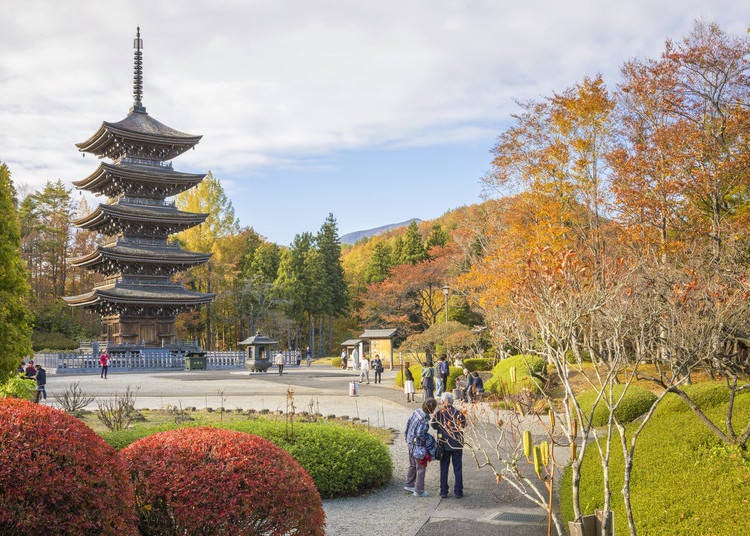 This peaceful temple is located deep within the mountains on the outskirts of Sendai City. It opened its doors in 1706 and is said to bring blessings upon those who come to seek luck in romance, fertility, and personal safety.

When fall comes around to Miyagi, the trees within the temple start taking on beautiful autumn shades, making it look quite artistic, but in a tastefully Japanese way, especially with the 29-meter tall five-storied pagoda standing tall among the brilliant and beautiful leaves as they sway in the breeze.

Come during late October for the best views. To get here, take the Sendai City Bus bound for Jogi from bus terminal no. 10 outside the West Exit of Sendai Station on the JR Lines. Disembark at the last stop. The journey will take around 75 minutes, but it's a direct path from Sendai Station to the temple, so there's no need to worry about transfers.

9. Yokokawa Canyon: Surround yourself with autumn leaves from atop the Yamabiko Suspension Bridge 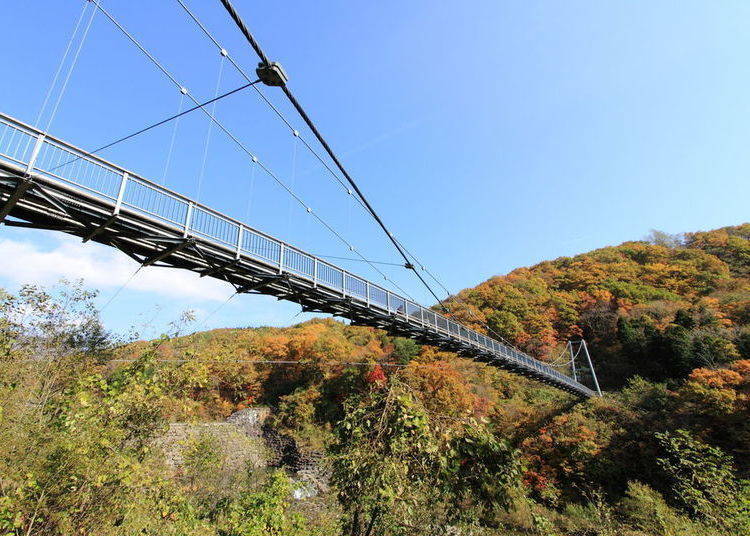 Both sides of the canyon are decorated with broadleaf trees like beech and oak, and early October to late November is the best time to catch them in their full autumn glory, especially from the middle of Yamabiko Suspension Bridge, the largest suspension bridge in Tohoku, measuring about 120 meters (393 feet) in length. Many have had their breaths taken away by the beautiful sight the place has to offer - and it sure wasn't because of being on a suspension bridge!

Although there is a bus stop nearby, the buses that ply this route are infrequent, so driving is still the best way to reach this place. If you have to use public transport, take the town bus bound for Shichikashukumachi Yakuba from Shiraishi Station on the JR Tohoku Main Line and get off at the last stop. Change to the town bus bound for Yokokawa/Choro and get off at the bus stop Seishonen Ryokomura, then walk for about five minutes to reach.

10. Nametsu Falls: You haven't seen grace in a waterfall until you see this 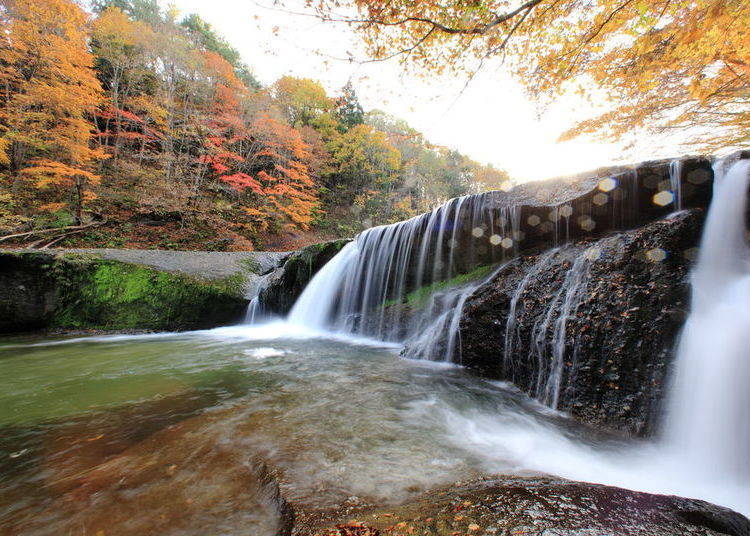 Nametsu Falls is one of the most well-known waterfalls of Miyagi. It has a few layers of tuffs shaped like stairs, which also earned it the moniker, "Two-Storied Waterfall". The waterfall is 10 meters (32 feet) tall and 30 meters (98 feet) wide, and a large quantity of water constantly flows off the edges across its entire width, a powerful sight whether from afar or up close.

Surrounding the waterfall are beech, oak, and other broadleaf trees, which offer some of the best autumn leaves in Miyagi between mid-October to early November. A great viewpoint to visit is the Takimi Platform at the carpark of the nearby Shichikashuku Seasonal Market. The area also installs illuminations during the fall season every year to liven up the mood even further.

Take a bus from Shiraishi Station on the JR Lines and get off at the Shichikashukucmachi Yakuba bus stop. Change to a town bus and get off at the Nametsu Ootaki bus stop and walk for 2 minutes to reach. As mentioned, the bus runs on an infrequent schedule, so be sure to plan a lot of allowance into the schedule, just in case anything crops up.

We hope you've found the list useful! The exact best timing to catch the autumn foliage at its peak will differ from year to year, and the dates of events being held in these places, such as night illumination events, may change as well, so always check the location's official website for the latest information before heading down!

Book an unforgettable experience in Tohoku!

Make your trip extra memorable by booking one of these recommended tickets and tours.

Sendai Backstreet Izakaya Hopping with A Local Guide
Buy a Japan Rail Pass – 7, 14, or 21 Days Unlimited Rail Travel in Japan
Get your JR East Pass (Tohoku area) Flexible 5 Days e-ticket now!
1-Day Nature Tour in Miyagi Prefecture: Frolic with foxes
*This information is from the time of this article's publication.
*Prices and options mentioned are subject to change.
*Unless stated otherwise, all prices include tax.