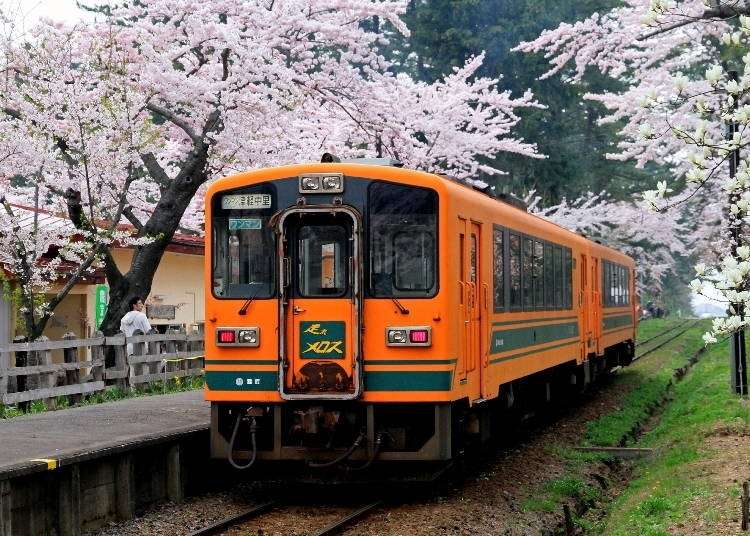 These gorgeous cherry blossom spots in Tohoku are a symbol of spring that has been loved by the Japanese for a very long time. Tohoku sakura are some of the most spectacular in the country.

Cherry blossoms in Okinawa, the southernmost part of Japan, tend to begin blooming around late January. This "sakura wave" continues north through the Kyushu and Kanto Regions in late March, ending with the northernmost Tohoku Region around mid-April, early May.

Here we will introduce a selection of the cherry blossom spots in Tohoku with the most magnificent views in six prefectures.

Since the Japanese archipelago extends from north to south, cherry blossom season varies by location. Tokyo begins to bloom in the middle of March. But Tohoku sakura in Aomori, located at the northernmost tip of the Tohoku Region, starts about a month later, around mid-April.

To enjoy the best views of cherry blossoms in the Tohoku Region, it is recommended to visit between mid-April and early May. 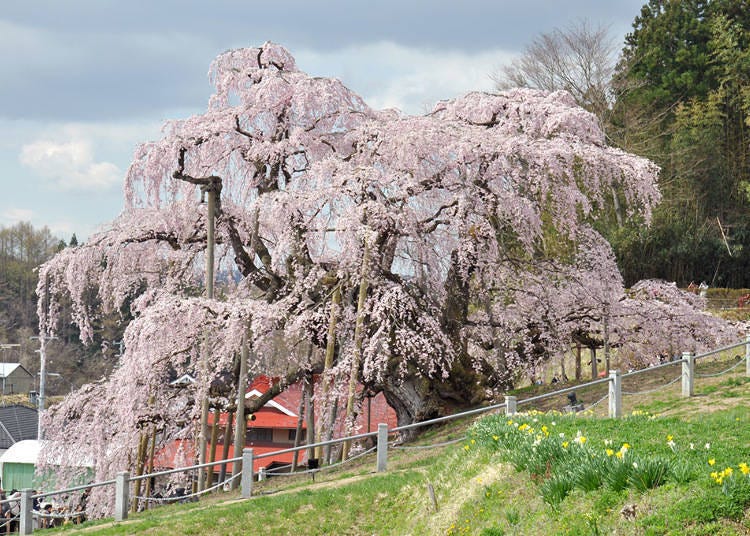 Miharu Taki-zakura was the first cherry tree to be designated as a national natural monument of Japan, along with Yamataka Jindai-zakura in Yamanashi Prefecture, and Neodani Usuzumi-zakura in Gifu Prefecture.

The name "Takizakura," or weeping cherry tree, is derived from its resemblance to a waterfall with its branches extending in all directions, covered in many small cherry blossoms.

Over 1000 years old, you can feel its overwhelming presence, even from a distance. And after you see the cherry blossoms in the daytime, don’t forget to come back at night for the light-up! The scenery made by the pale red cherry blossoms contrasted against the dark night is a mysterious beauty indeed. 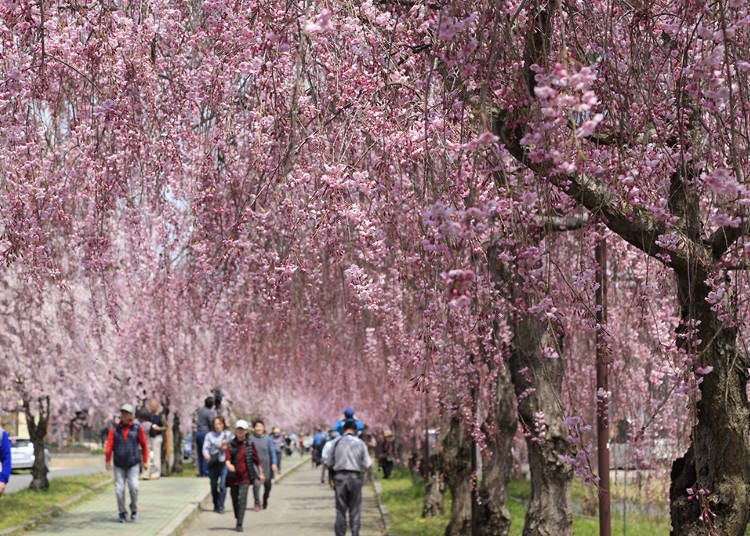 The National Railway Nicchu-sen was abolished in 1984. Currently, about 3 km of the site has been made into a walking promenade, lined with about 1,000 weeping cherry trees that all begin to bloom in mid-April.

One part of the promenade is lined with cherry blossom trees on both sides, turning the path into a beautiful cherry blossom tunnel. It makes for not just a nice viewing spot, but an incredible Tohoku sakura photo spot as well.

When the spring breeze passes through the delicate branches of weeping cherry blossom, the surrounding area becomes faintly perfumed in the sweet cherry scent.

Towards the midpoint of the promenade, you can also see the steam locomotive that once ran along the Nicchu-sen line. 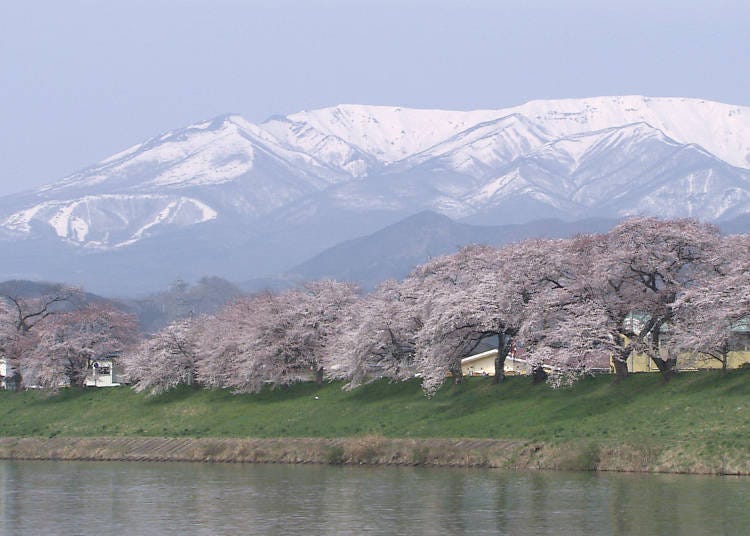 The Shiroishi River, which flows through the southern part of Miyagi Prefecture, is lined with about 8 kilometers of cherry blossom trees along its embankment, creating a stunning landscape with a backdrop of the majestic snow-capped Zao Mountains.

During the cherry blossom season, several Tohoku sakura festivals are held from early-to-mid April, including the Ogawara Sakura Festival, and the Ohanami Yakatabune, where you can view the cherry blossoms from aboard a ship.

In peak season, you can also watch the passing views of the cherry blossoms from inside a train by riding the JR Tohoku Main Line as it passes slowly between Ogawara Station and Funaoka Station, alongside the cherry blossom trees. 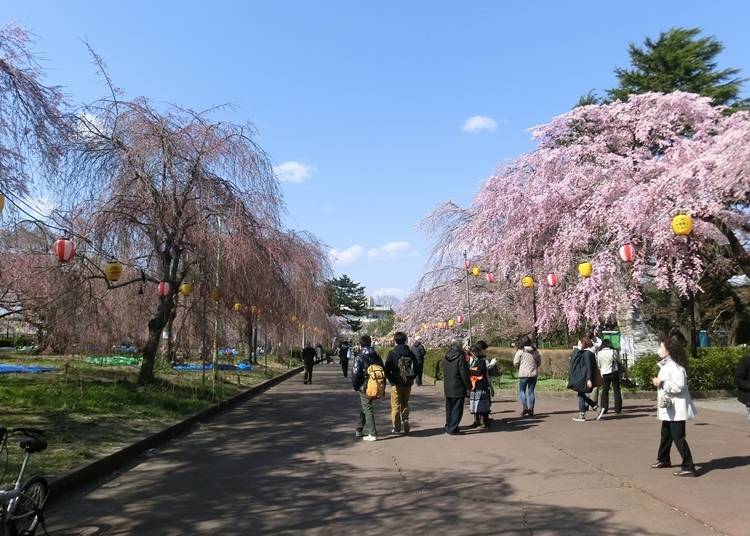 Tsutsujigaoka Park is known for its weeping cherry trees. It is said that Tsunamura, the fourth lord of the Date clan, planted cherry trees imported from Kyoto, marking the beginning of the park.

During early spring, about 370 cherry trees come into full bloom here, filling the park with visitors. Tsutsujigaoka Park has a wide variety of cherry blossoms, including weeping cherry, Somei-Yoshino, Yaezakura, Higanzakura, and Ukon-zakura, so visitors can enjoy cherry blossom viewing for a relatively long time.

The Sakura Festival at Tsutsujigaoka Park is usually held in early April, with food stalls and nighttime lighting. Access is easy, with the nearest station being JR Tsutsujigaoka Station - about a 3-minute walk away - or a 10-minute walk from JR Sendai Station.

The Cherry Blossom Festival for 2021 is yet to be determined. 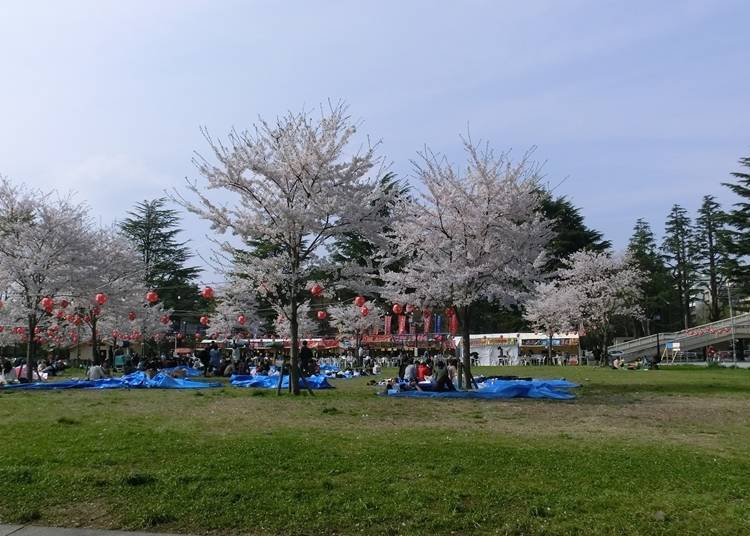 Nishi Park is a cherry blossom viewing spot located near Jozenji-dori, a symbolic road for Sendai. About 200 cherry trees, including Somei-Yoshino and Edo-higan Zakura, are in full bloom. There are also many other attractions in the park.

The first lord of Sendai, Date Masamune, brought a plum tree back to Sendai Castle from Korea and later transplanted it. There is also an old-established teahouse where you can taste Sendai's famous "zunda mochi" (rice cake with red bean paste) while admiring the cherry blossoms.

Omachi-Nishi-Koen Station on the Sendai City Subway Tozai Line is right in front of the park, making it easily accessible, and since it is within walking distance of JR Sendai Station, it is also a good place to visit while enjoying shopping and eating out. 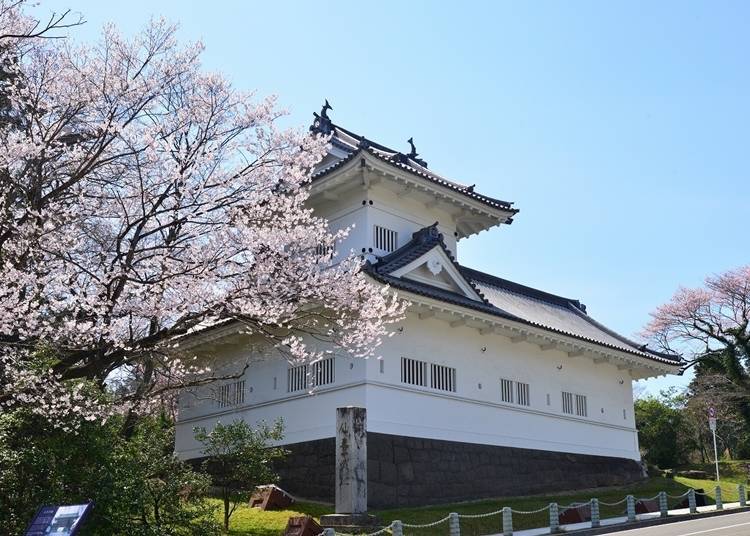 The ruins of Sendai Castle (also known as Aoba Castle), the former residence of the Date clan, is a well-known sightseeing spot in Sendai.

In spring, you can see the statue of Masamune Date standing on his horse against the light red cherry blossoms. The area around the ruins of Sendai Castle is Aobayama Park, which is surrounded by the rich nature of the Hirose River and Mt. Aoba.

To get there, take the Sendai City Loop Bus "Loople Sendai" from Bus Stop No. 16 at the West Exit of JR Sendai Station (about 20 minutes). Get off at "Sendai Castle Ruins" bus stop. 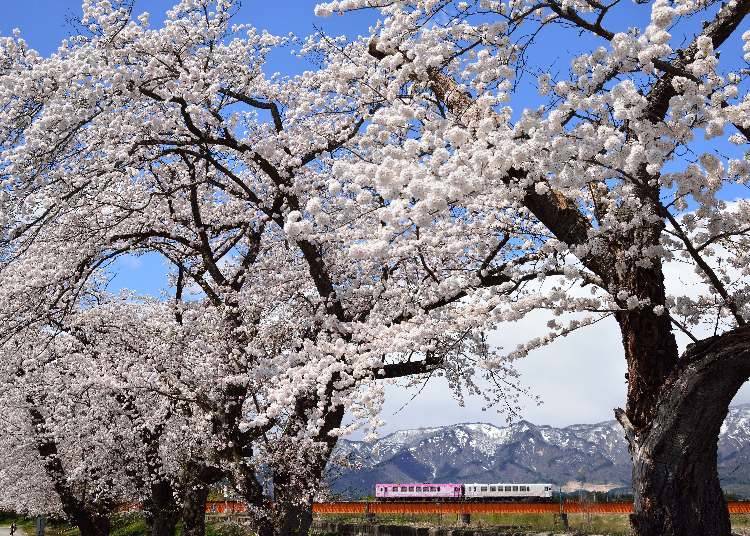 This 43km-long sightseeing route connects the famous cherry blossom areas in the southern part of Yamagata Prefecture with the Okitama Region. The area spans two cities and one town: Nanyo City, Nagai City, and Shirataka Town, and runs along the Yamagata Railway ‘Flower Nagai Line.’

The area is dotted with all kinds of famous cherry blossom trees, including the Nanyo Eboshiyama-senbon Sakura, the 1,200-year-old Yakushi Sakura, as well as the Edo-higan Zakura and Isazawa-no-kubo Sakura, which are two of the representative cherry blossom trees of Okitama Sakura Corridor and also designated Natural Monuments of Japan.

It is also famous for its one, individually standing cherry blossom tree, called the “Lonesome Cherry Blossom” and said to be over 1,000 years old. For quick and easy travel, we recommend using a guided taxi to get you through the main attraction cherry tree spots along the route. 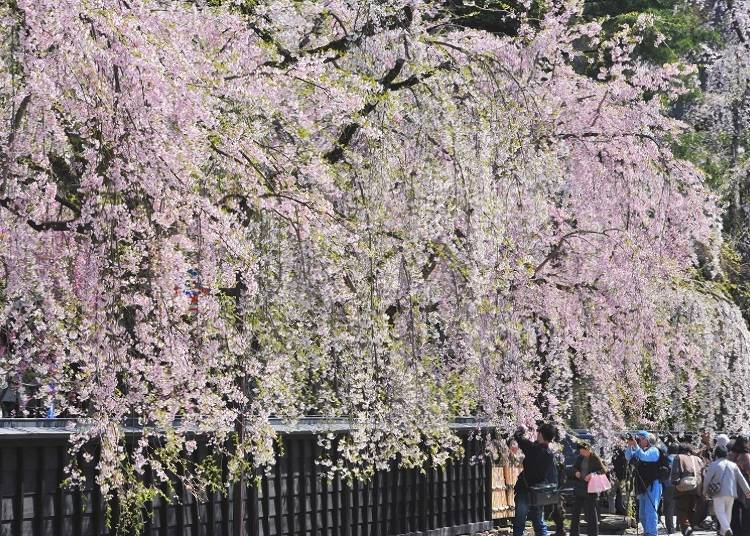 Kakunodate, Senboku City, Akita Prefecture, is a popular tourist spot where the old streets from 390 years ago remain. Bukeyashiki-dori is a place where many samurai residences were built, and is particularly popular, attracting plenty of tourists.

Towards the end of April every year, the streets become decorated in pink weeping cherry trees, creating a stunning view when contrasted with the black wooden fences surrounding the samurai residences. During the Kakunodate Cherry Blossom Festival, usually held during peak season, the trees are lit up from sunset to 10:00 PM.

The Hinokinaigawa River, located about a 3-minute walk from Bukeyashiki-dori, is also famous as a cherry blossom spot in Tohoku. 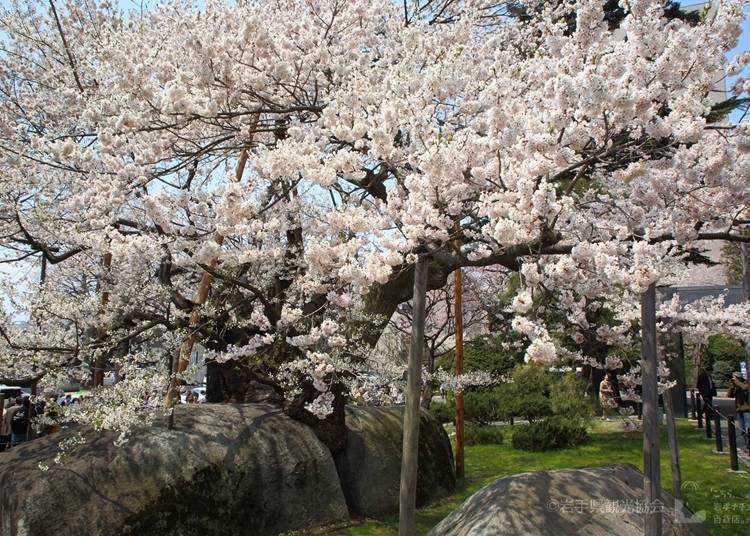 The Edo-higan Zakura cherry blossoms bloom in front of the Morioka District Court. The tree is said to be 360 years old and is designated as a national natural monument. The cherry blossoms sprout in the cracks of a huge rock 21 meters in circumference, said to have been split by a lightning strike. The courthouse is open from 8:30 am to 5:45 pm. You can still enjoy the view from the sidewalk when the gates are closed.

This is the former site of Morioka Castle, which was the residence of the lord of the Nanbu domain. Today, the granite stone walls and pond remain, and the park is enjoyed by people from around the city. It is said that Takuboku Ishikawa and Kenji Miyazawa, poets associated with Iwate, often visited the park, and there are monuments to each found in the park.

The cherry blossoms in full bloom against the backdrop of the stone walls are a sight to behold. 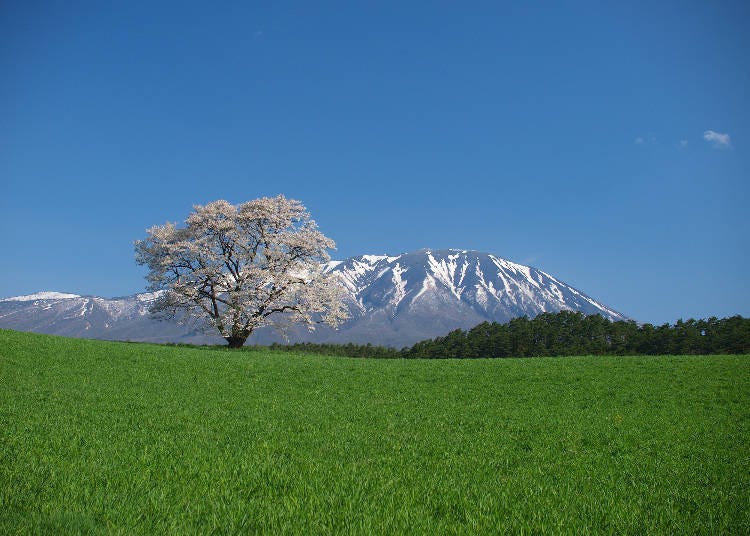 At the foot of Mount Iwate, the highest peak in Iwate Prefecture stands a single cherry tree on Koiwai Farm, a local tourist attraction. It has an impressive, dramatic appearance that reflects the overcoming of a long, harsh winter with its strong roots planted firmly in the green land.

The cherry blossom trees are located in a pasture area about 5 minutes away by car from the sightseeing area, Makiba-en. The area is also accessible by bus from Morioka Station.

Originally, it is said to have been one of the shade trees planted about 100 years ago to protect the heat-sensitive cows on the farm from the strong sunlight.

The parking lot is open 24 hours during the Tohoku sakura season. Early morning is a particularly beautiful time to visit, and perfect for photography.

The Solitary Cherry Tree can only be viewed from behind a fence. Access to the nearby pastures, windbreaks, and farm roads is also prohibited. Lastly, please note that operating a drone on the premises is also strictly forbidden. 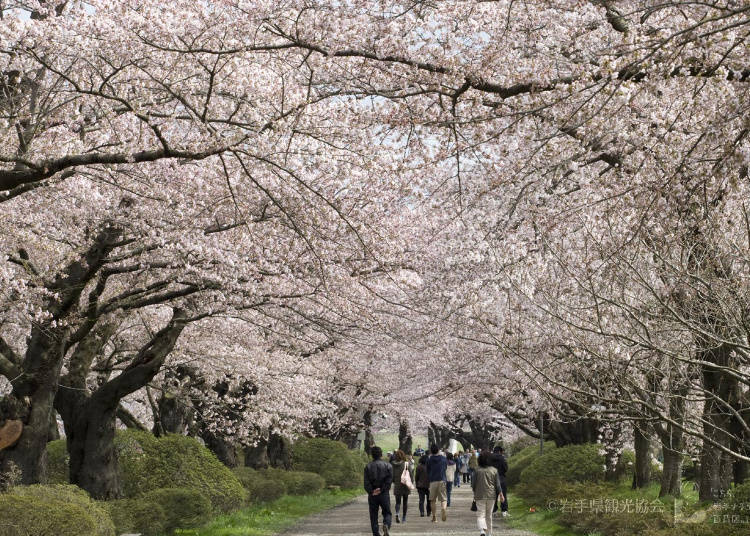 Along the banks of the Kitakami River lies Kitakami City Park Tenshochi, which is lined with tons of 90-year-plus Yoshino cherry trees.

In addition to the trees lining the 2km stretch of river, there are also about 10,000 other cherry trees in the park, including about 150 more Yoshino cherry trees, weeping cherry trees, and Kasumi cherry trees.

During the Kitakami Tenshochi Cherry Blossom Festival, you can ride a retro carriage through the cherry blossom tunnel, which is another attraction popular among tourists.

Another Japanese custom you can see are the 300 “koinobori,” or carp-shaped windsocks, flying above the Kitakami River, representative of a prayer said for the health of children. 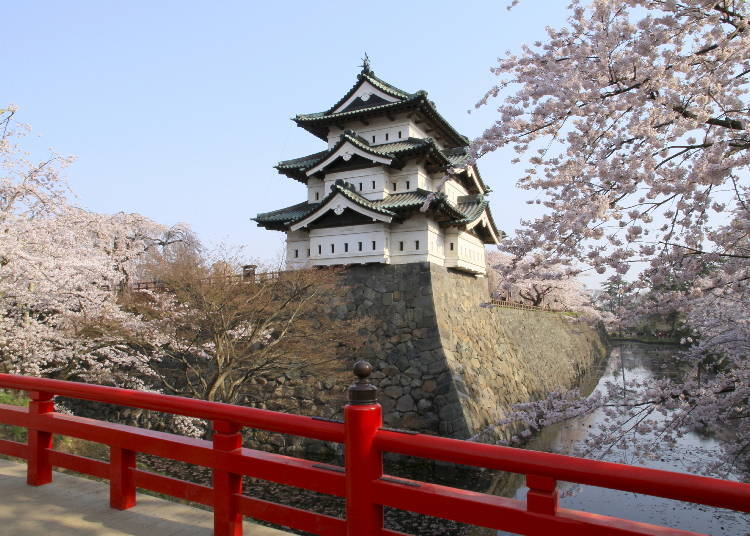 There are about 2,600 cherry trees in full bloom, most of which are Yoshino trees, as well as 52 kinds of weeping cherry trees, such as sato-zakura cherry trees. There are several spots with magnificent views, including the beautiful scenery of flower petals that blanket the water’s surface.

The impressive landscape of the cherry trees accompanied by Mount Iwaki and Hirosaki Castle in the background can also be seen from the Hirosaki Castle Honmaru Observation Deck. 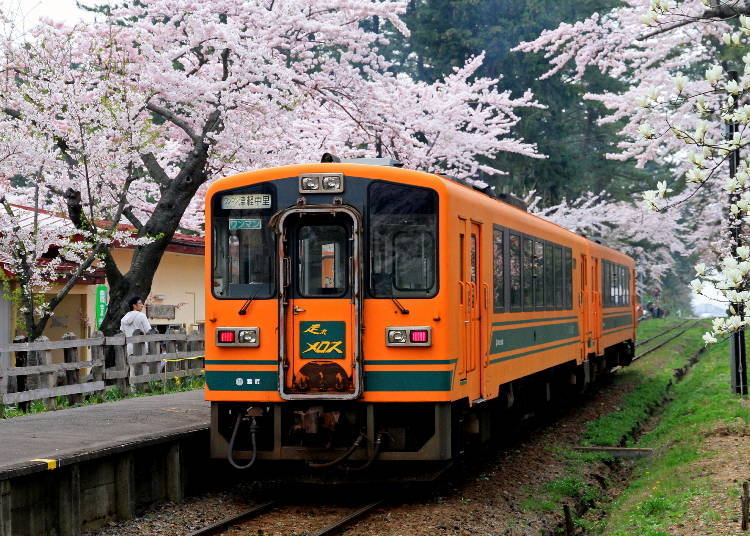 Ashino Park is a vast park with many attractions including Lake Ashino, a children's zoo, a campsite, and a railway station.

It is also a well-known cherry blossom viewing spot with about 1,500 trees, including Yoshino and Sato Sakura trees, and boasts a peaceful, natural landscape full that has been selected as one of the Top 100 Cherry Blossom Viewing Spots in Japan. 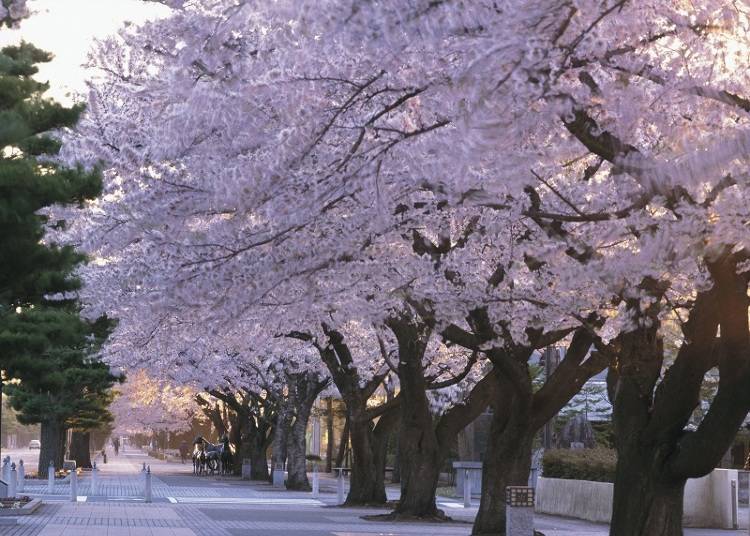 There are 156 cherry trees and 165 pine trees planted along the street, which create a beautifully contrasted view of sakura pink and pine green around mid-April. Another must-see is the giant horse monument, which was built based on Towada City’s history as a horse-raising area.

Towada City Hall also has an observation lobby on the 5th floor where you can get a birds-eye view of the cherry blossoms, considered among the finest cherry blossom spots in Tohoku.

The information in this article is current as of March 2021. Please check official websites for the latest information.