HOME Kansai Osaka Nanba, Dotonbori, Shinsaibashi What To Do If Disaster Strikes During Your Osaka Trip: Complete Guide to the Basics of Disaster Response! 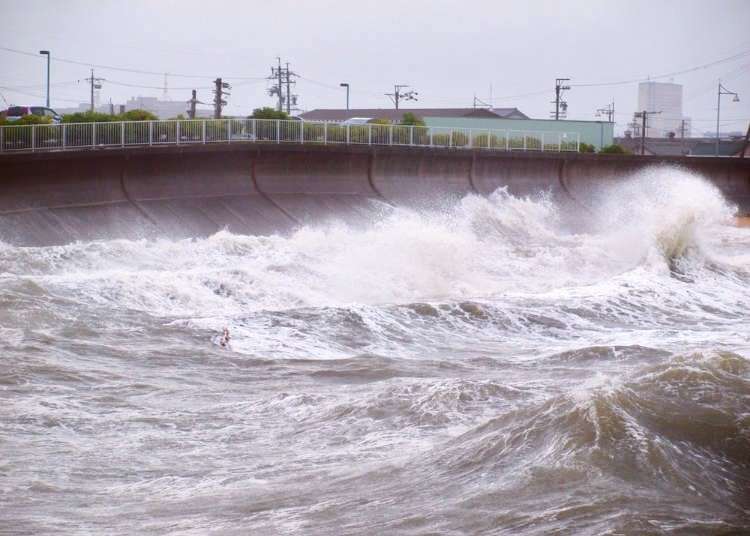 What To Do If Disaster Strikes During Your Osaka Trip: Complete Guide to the Basics of Disaster Response!

Japan is no stranger to natural disasters such as typhoons and earthquakes. There is always the possibility of an earthquake occurring during your travels. August through October sees the addition of frequent typhoons, so you may witness heavy rainstorms and flooding.

In the event that you do encounter such phenomena, this article will introduce the main things you should know about each type of natural disaster so that you can respond calmly and without panicking. 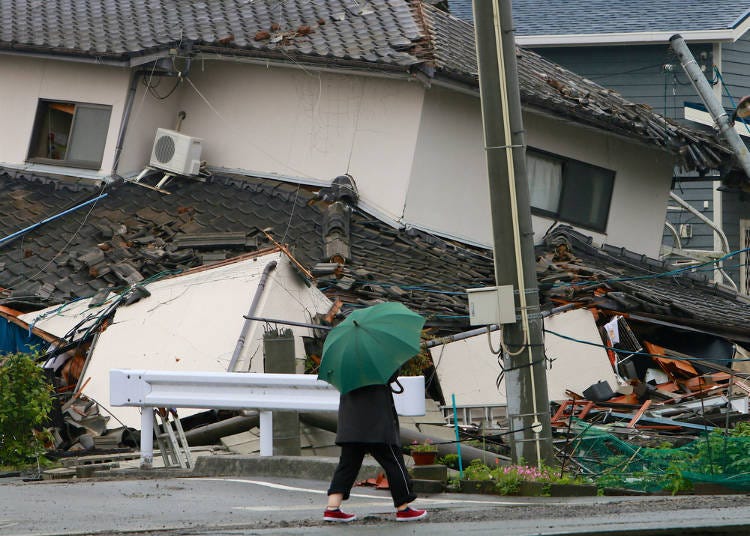 Earthquake Basics to Know Ahead of Time

While an Earthquake is Occurring
1) Try to get somewhere where objects can't "drop, fall over, or shift" and hurt you. If you're inside, take cover somewhere such as underneath a table, and if you're walking outside, move in to the open such as the middle of the street.
2) Once you're in a safe spot, remain there without moving until the shaking has completely stopped.
3) Gates, walls, and fences run the danger of collapsing, so try to stay away from them.

After an Earthquake Occurs
4) There may be fallen items of furniture or shards of shattered glass, so without panicking or rushing, check the floor as you move around.
5) Don't forget that along the coast there may be tsunami waves, and in crowded downtown areas fires may break out.
6) You may be unable to use the internet or phone lines due to overcrowding. Don't panic and simply wait for the lines to be restored.
7) Even if you may want to move quickly, sometimes traffic and public transport may be stopped. Get the latest updates on the transit situation first, instead of making any reckless moves. 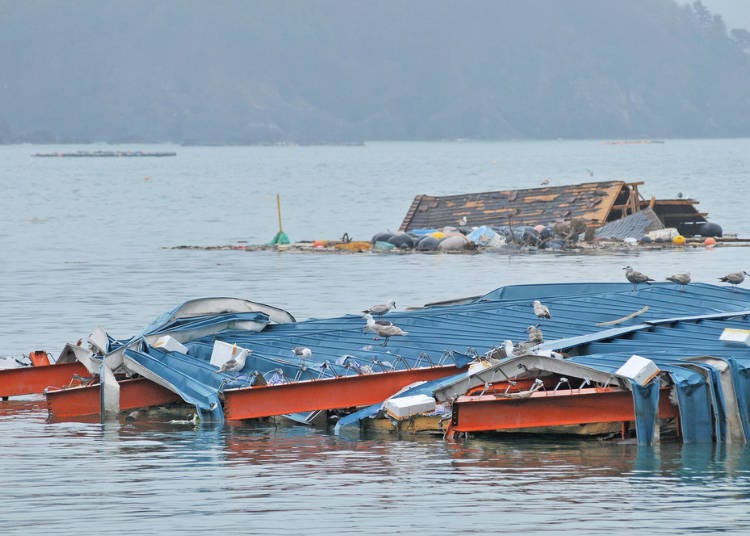 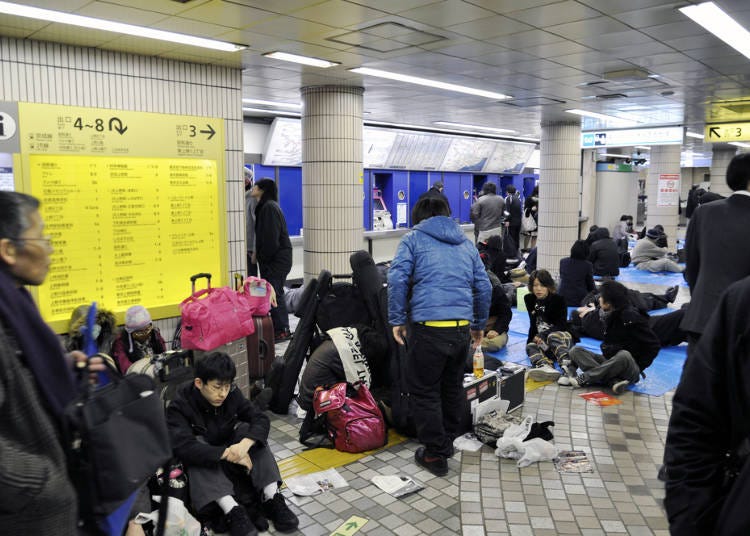 If you're in a downtown area:
Dangerous objects such as window panes, billboards, and neon signs may fall from tall buildings, so cover your head with a bag or other personal item, stay away from buildings, and get to a park, plaza, or other open space. Especially in a crowded area, panic can erupt as people crowd around exits, so it's important to remain calm.

If you're inside a building:
If you are inside a tall building, you may feel drastic swaying, and the movement may last longer than on the ground. If you feel swaying, move to somewhere such as an elevator hall. Once the swaying stops, although you may want to take the elevator down to the ground floor, elevators are sometimes stopped because of electric outages. Avoid using elevators and use the stairs instead to get to safety.

If you're in a supermarket or convenience store:
Items may fall from the store shelves. Protect your head with a bag or shopping cart and stay away from objects that are likely to fall over.

If you're on the train, subway, or bus:
If an earthquake occurs while the train is running, the cars will sense the vibration and come to an emergency stop. If you are standing, grab onto a hand rail or hanging hand grip, and if you are sitting, remain in a low position.

If you're in a hotel room:
There is a possibility of bedside tables and other furniture falling over. Protect your head with a pillow or blanket, and once the shaking stops, open the door and make sure of the path to exit the hotel. It is also important to check the location of emergency exits ahead of time as soon as you check into your room.

If you're near the ocean:
There is a danger of tsunamis forming, so get to higher ground. If there is no higher elevation area around, then move to the upper floor of a reinforced concrete or other sturdy building. 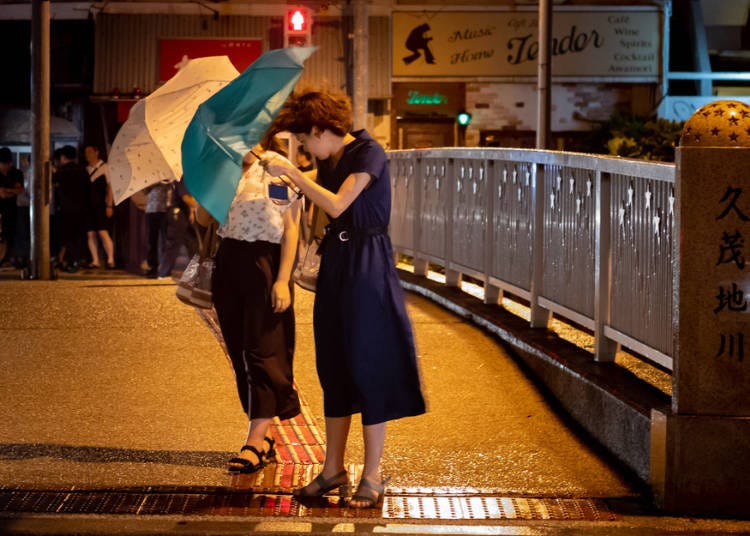 During the months of August through October, typhoons often cross paths with the Japanese chain of islands, and the Kansai area can experience strong winds, flooding, and landslides. Recently, in August 2018, Typhoon Jebi hit western Japan and caused torrential rainfall, which led to Kansai International Airport flooding and suffering severe damage. Many foreign tourists who don't speak Japanese have reported not even knowing that a typhoon was coming, and that it was troublesome not knowing any information about the status of public transportation. Here are some main points you should know about typhoons to help avoid facing the same issues.

Basic Points to Know in the Event of a Typhoon

1) The path and magnitude of a typhoon changes daily. Once a typhoon warning is announced, check the weather forecast every day utilizing resources such as services at your hotel or inn front desk, tourist information centers, or the English news program "NHK World".
NHK WORLD: https://www3.nhk.or.jp/nhkworld/
2)When a typhoon hits, trains, airplanes, and other modes of transportation may suffer delays or cancellations, starting from before the typhoon reaches land. Don't make any reckless moves in location, and instead gather information on the transport situation before deciding to travel.
Transfer information (available in foreign languages): https://localcheers.jp/japantransitplanner_usefulwebsite/
3)Once a typhoon is close, signboards and roof tiles can be thrown by the wind, so stay indoors as much as possible.
4) Landslides, rising water levels in rivers, and other flood damage is easy to occur, so try to stay away from rivers. 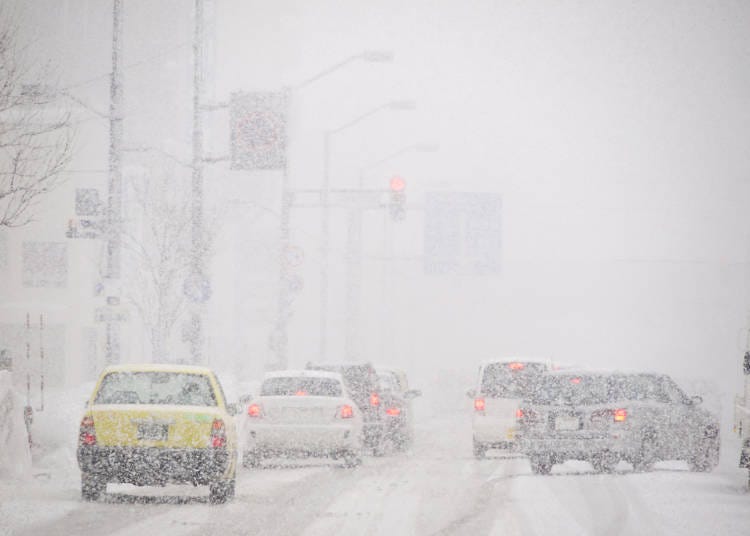 It is rare to witness snowstorms in the Kansai area, but when it does snow, there can be disruptions to public transit and secondary disasters. This is especially pertinent information for those who live in countries without snowfall.

Basics to Know in the Event of Heavy Snowfall

1) As with typhoons, once snowfall is forecasted, check the weather forecast every day.
2) Trains, airplanes, and other methods of transportation may suffer delays or cancellations. Don't rush and make any moves after checking the status of transportation ahead of time.
3) If you aren't used to walking in snow, you could fall and suffer severe injury. Tips to walking on snow are to raise your leg vertically and then immediately step back into the snow. Depending on your location, snow may harden and become slippery, so be cautious.
4) Large chunks of snow can sometimes fall from roofs. When you're walking outside, watch not only your feet but overhead as well.

What to Do When You're Sick or Hurt in the Kansai/Osaka Area
What to Do if You Get Sick While Traveling in Osaka or Kyoto? A List of Tourist-Friendly Hospitals
*This information is from the time of this article's publication.
*Prices and options mentioned are subject to change.
*Unless stated otherwise, all prices include tax.