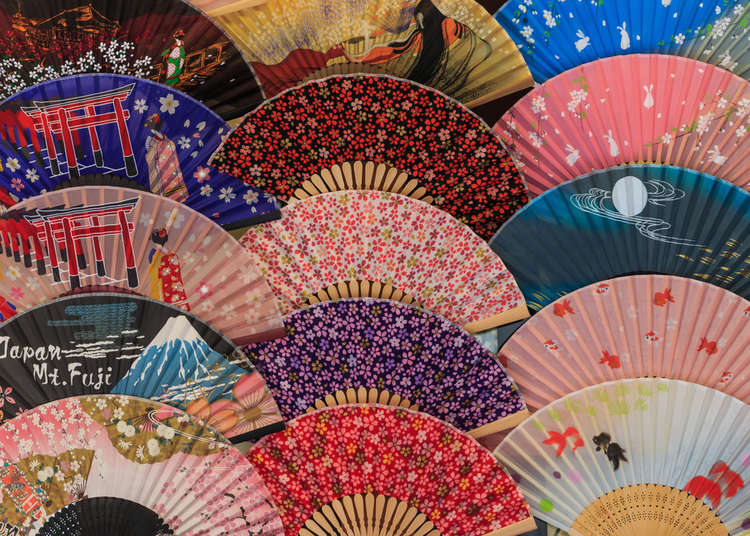 A big draw for the huge crowds of tourists heading to Japan is shopping, so many products are well made and sold at a reasonable price, while being able to buy tax-free is an added bonus. If you combine this with Japan’s amazing cuisine scene, beautiful nature and friendly people, then it isn’t hard to see why places like Tokyo are one of the top destinations in the world for shopping. From Ginza to Shinjuku there are so many shopping districts, and an abundance of department stores such as Daimaru, Mitsukoshi, Parco, Matsuya, etc. Moreover, a visitor to Tokyo definitely can’t leave this spectacular city without buying the following 15 items. 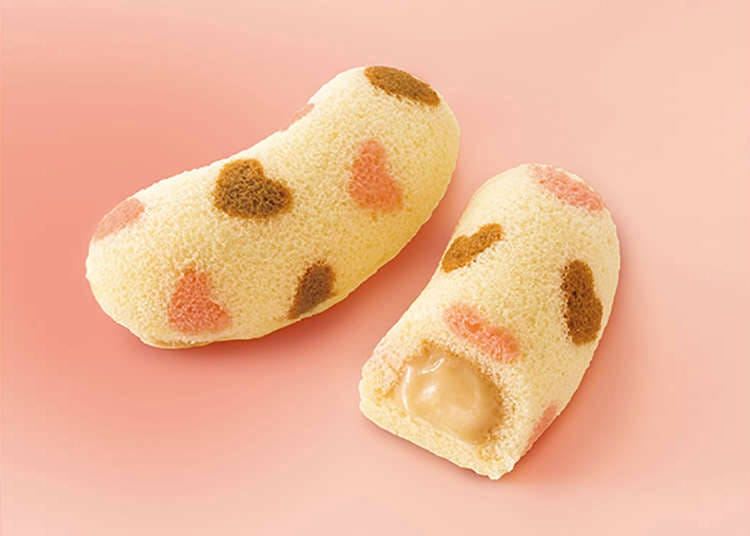 Tokyo Banana
This sweet first appeared in stores in 1991 and has remained popular for good reason; it is both tasty and original. It is so popular that even Kit Kat has got in on the act and there is now a Tokyo Banana Kit Kat. It can be found at department stores across the city, as well as at the airports. 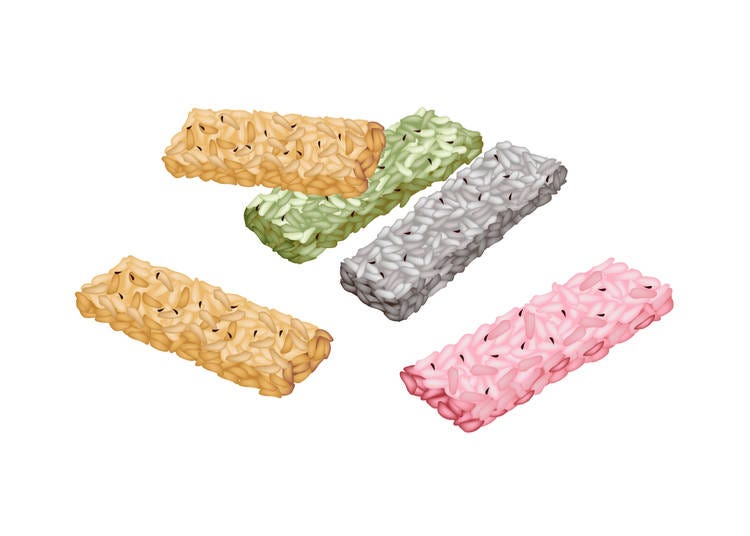 Kaminari-okoshi
Asakusa is renowned for this sweet which is made of roasted rice, mixed with syrup and sugar. All kinds of other ingredients can then be added to it, like nuts or sesame. This particular sweet dates back over two hundred years and is a very popular souvenir for anyone who visits this extraordinary area of Tokyo. 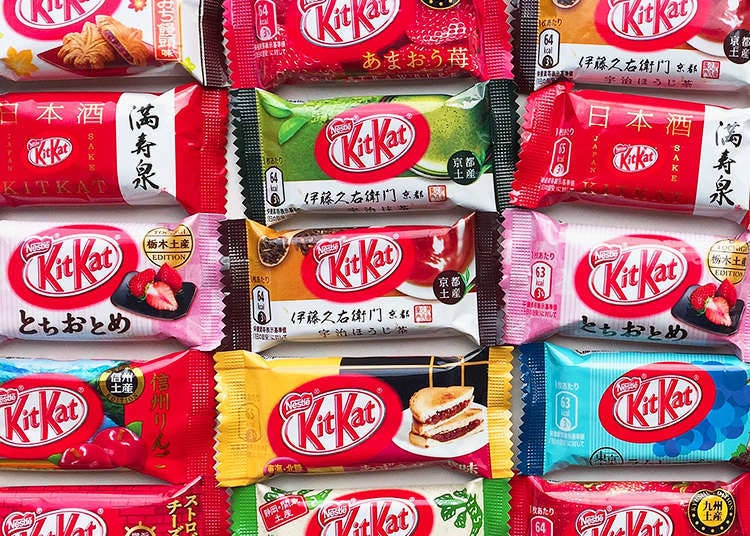 Kit Kat
While technically an originally British chocolate, Kit Kat has fitted neatly into the culture of Japan with its unique Japanese flavors. In Tokyo there is the special regional flavor of KITKAT Mini Rum Raisin, as well as the presence of no less than four chocolatory shops where you can try other limited edition Kit Kats, including the Sublime series. 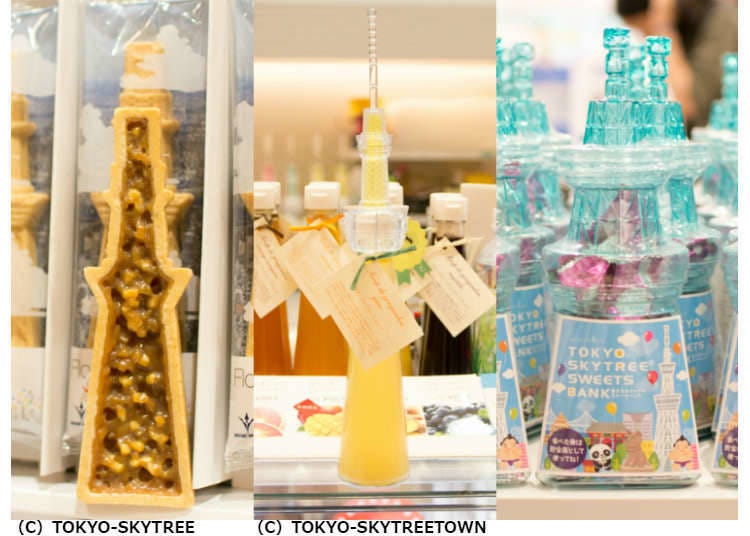 Tokyo Skytree chocolates
No other building in this modern city stands out quite so much as 634 meter Tokyo Skytree, located not far from Asakusa it can be seen from most of Tokyo. Tokyo Skytree sweets are made in the shape of this famous structure, and while they aren’t nearly as tall as the original, they sure are delicious. 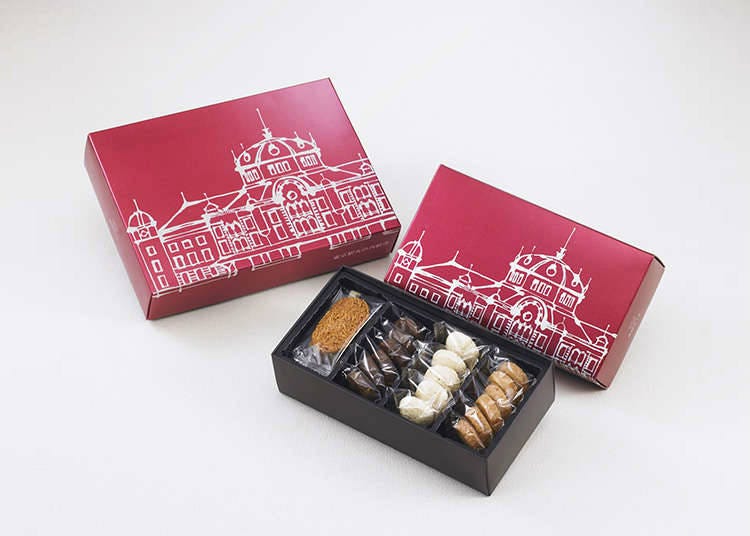 Tokyo Station Marunouchi Building Crispy Chocolat
These chocolate sweets have been made in the shape of the world famous Tokyo Station, which was originally built over a hundred years ago. Along with the Tokyo Skytree chocolates, this is another sweet which uniquely symbolizes a famous Tokyo landmark. 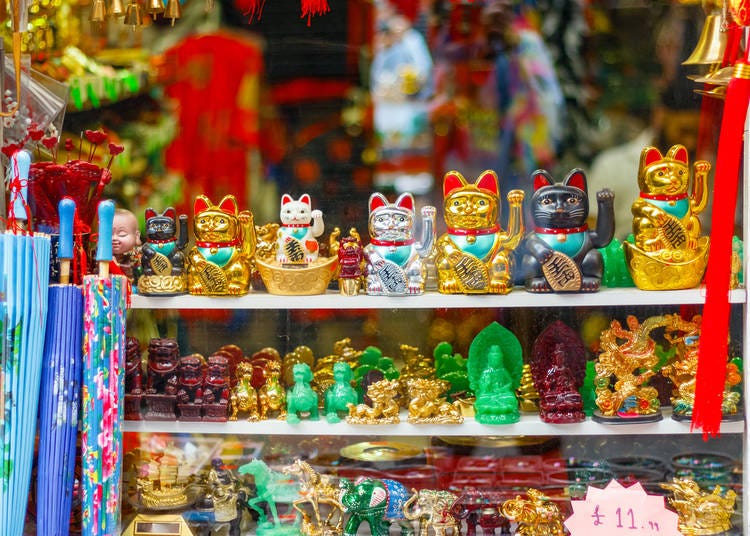 Maneki-Neko
The figure of a beckoning cat has become synonymous with Japan; as such it is really a souvenir that you can’t leave this country without. Imado Shrine in Asakusa has been cited as the original birthplace of Maneki-Neko, but in truth its origins are a little bit murky with some also claiming that it originated in Kyoto. Regardless of where it came from, this is a good item to buy in order to get some luck! 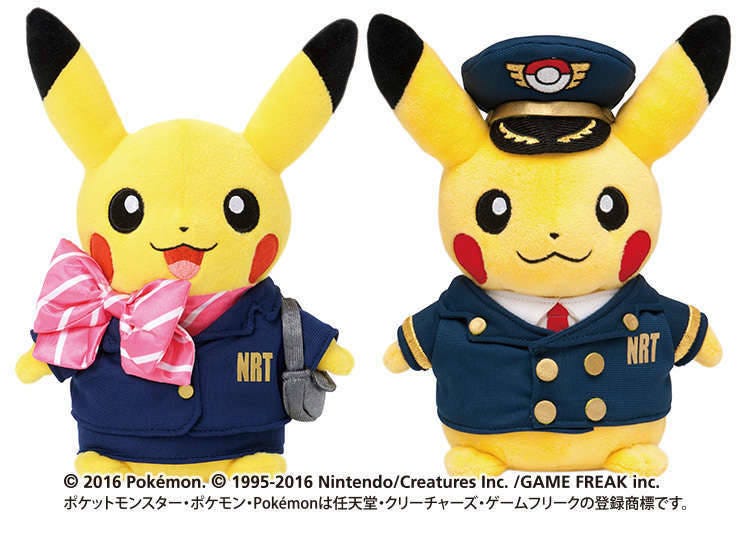 Pokémon
Pokémon had already been famous for decades via the countless cartoons and games that had been released worldwide before Pokémon Go became a modern day phenomenon. You don’t have to be a fan of the game to enjoy some cool Pokémon items from one of the three Tokyo Pokémon Centers. 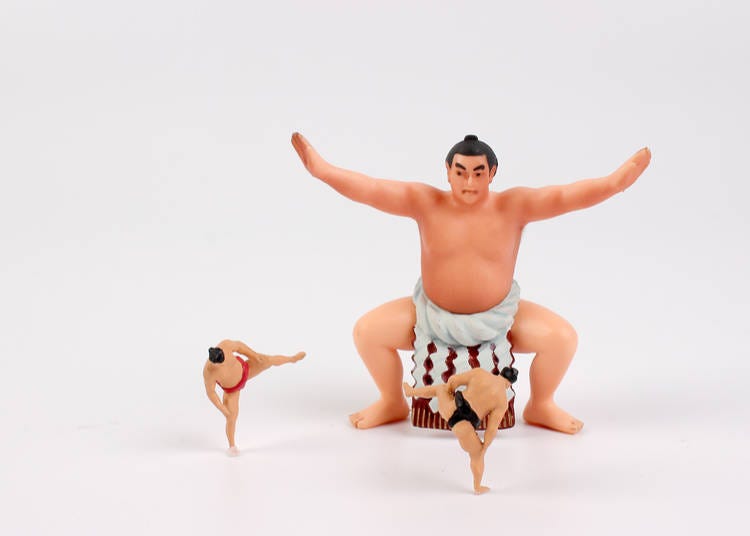 Sumo souvenirs
Perhaps no other sport in the world says Japan as much as Sumo wrestling. It originated in the 17th century, and today three of the six official Sumo tournaments take place in the Ryogoku Kokugikan venue in Tokyo. The shop at Ryogoku Kokugikan is stocked to the gills with Sumo related shopping, making this a top choice for souvenirs. 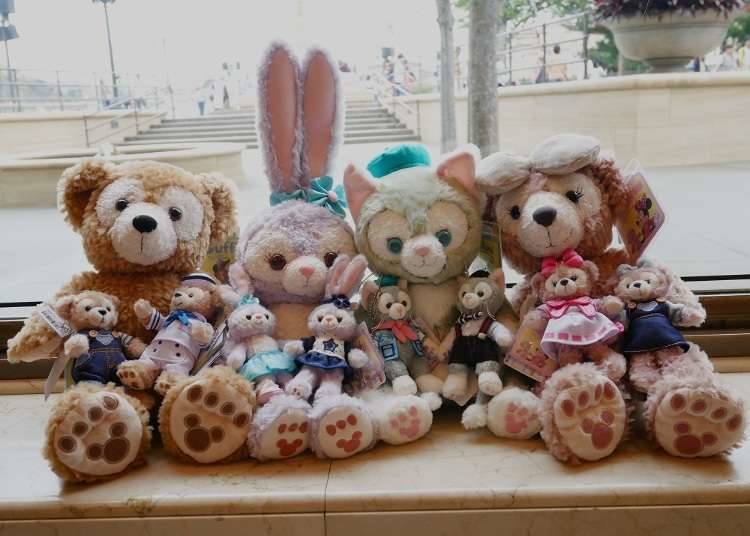 Disney Tokyo Resort Souvenirs
Although not originally Japanese, Japan has really made Tokyo Disney Resort its own, and for over thirty years it has welcomed guests through its doors. There is an amazing array of souvenirs which can be bought from here which are popular with everyone, from kids to adults.

Read on: "15 Must-Have Items from Tokyo Disneyland and DisneySea" 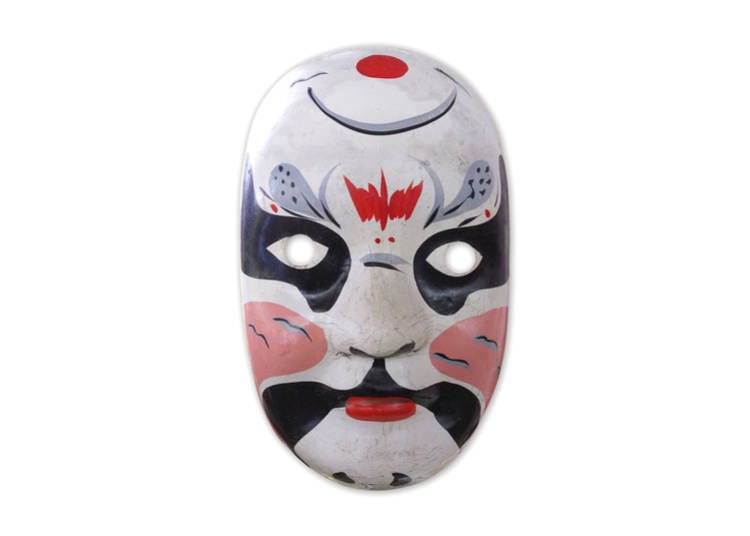 Kabuki Souvenirs
As Sumo is to sport, Kabuki must be the most famous form of Japanese theatre. The Kabukiza Theatre in Tokyo is the place to catch a Kabuki show, and below it you can find many Kabuki souvenir shops, though in truth you can find Kabuki related souvenirs nearly everywhere including in Tokyo Station Character Street.

Cosplay goods (Akihabara)
Cosplay started in the 1980s and since the 1990s it has taken off around the world, today Akihabara has become a kind of Mecca for cosplay enthusiasts. This district of Tokyo is a must-visit place for all visits to Japan, not only for cosplayers but for everyone to experience this unique cultural phenomenon.

Manga/anime goods (Akihabara, Tokyo and Ikebukuro)
Cosplay and manga/anime go hand-in-hand, so it is no surprise that Akihabara is also a great place to get all kinds of cool manga related shopping. Another good location is Character Street near Tokyo Station where you can get another must-buy: a My Neighbor Totoro toy.

Phone accessories (Bic Camera, etc.)
Japan has certainly cemented its place as the land of electronic goods in the modern world, and as such you are absolutely spoilt for choice in terms of phone accessories. Check out stores like Bic Camera and Yodobashi Camera where you can find uniquely Japanese items such as phone covers. 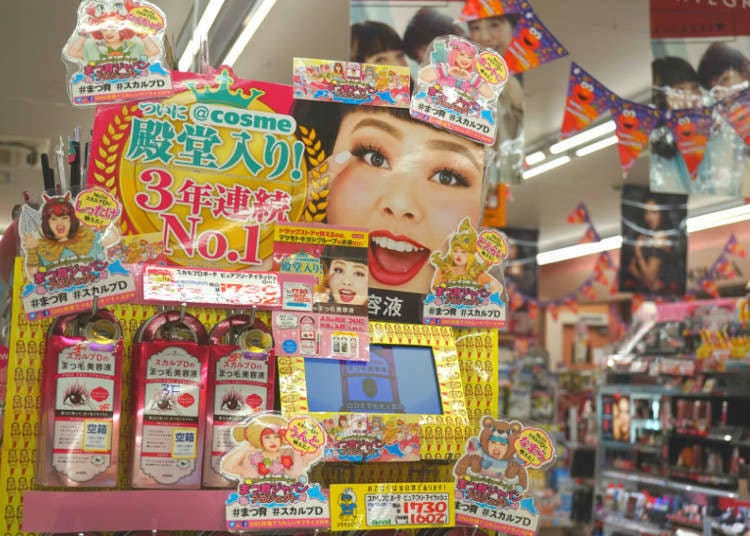 Cosmetics
There is an astonishing array of cosmetic goods to be found in Japanese drugstores, obviously the bigger the store the more items you can find. For the more discerning buyer try a unique Japanese cosmetic which includes rice extract – this is a rice culture after all !This really makes Tokyo one of the top destinations for all cosmetic related shopping! 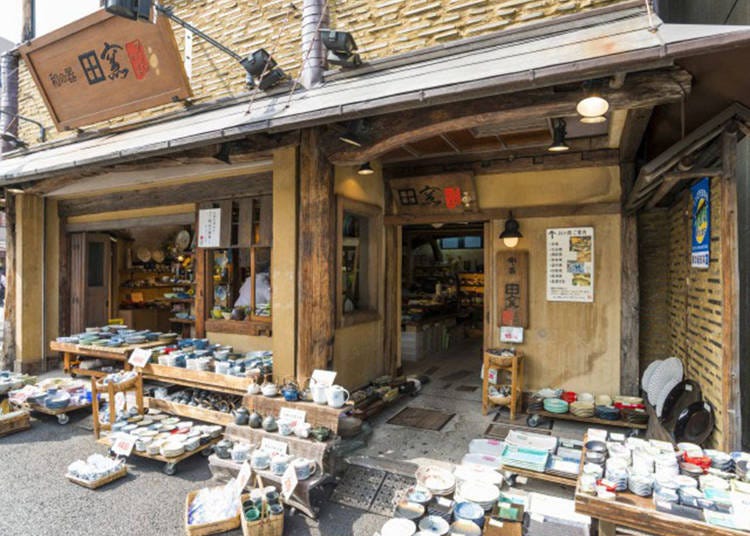 Kitchen Goods
The final item on this list isn’t one you would necessarily associate with Japan, but on Kappabashi Street near Asakusa you can find an impressive number of shops selling uniquely Japanese kitchen items. This is the place to go to buy your own miso soup bowl, or chopsticks, and much more. In addition you can even buy the fake food models which can be seen outside virtually every restaurant in Tokyo!

Related article: "Kappabashi: 5 selections of astonishing stores"
*This information is from the time of this article's publication.
*Prices and options mentioned are subject to change.
*Unless stated otherwise, all prices include tax.