HOME Japanese KitKat: The Secret Stories Behind the 300+ Unique Flavors 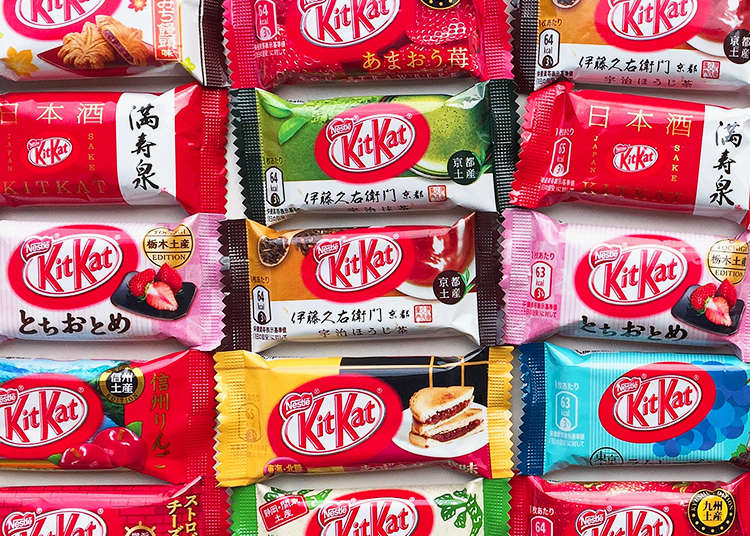 Japanese KitKat: The Secret Stories Behind the 300+ Unique Flavors

The original four-finger bars of KitKat first appeared in the 1930s in the UK. Over the decades since then, the brand has become a staple of life for British chocolate lovers and has gradually expanded globally. However, apart from some exceptions, like the orange chocolate flavored KitKat, it has basically retained the same flavor around the world. Since the turn of the century an interesting development has occurred, which saw KitKat experimenting with different flavors in Japan, to great acclaim. 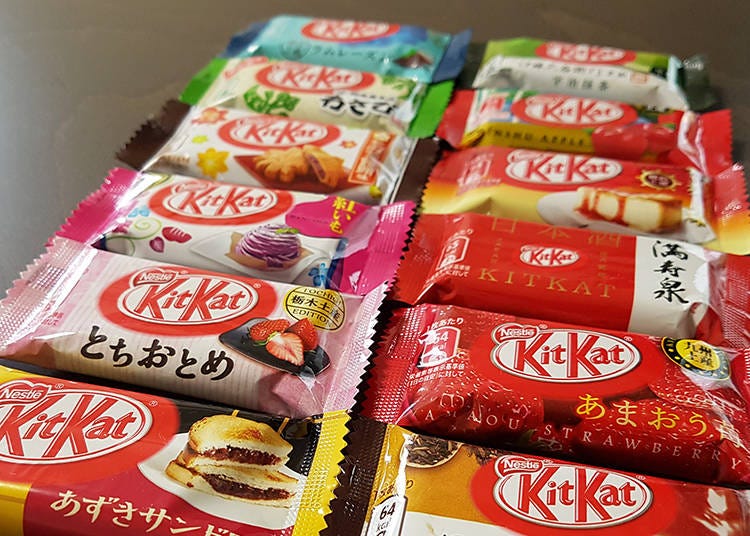 Today not only Japanese people, but many tourists too, frequently buy KitKat in Japan. For tourists it is more than likely that they can buy KitKat in their own country, but only in Japan can they buy a KitKat with an original flavor unlike anything they have tried before. It has become a target for souvenir hunters who not only look for particular types of KitKat such as green tea flavor, but also the more unusual, harder to find, flavors too.

More recently KitKat owners Nestle have upped the ante by opening KitKat chocolatory stores, where even more flavors and gift ideas await KitKat lovers everywhere. In addition, to keep up with demand Nestle opened a new factory in Japan in 2017. In order to shed some light on amazing success of KitKat and extraordinary flavors we had the opportunity to speak to a company representative. 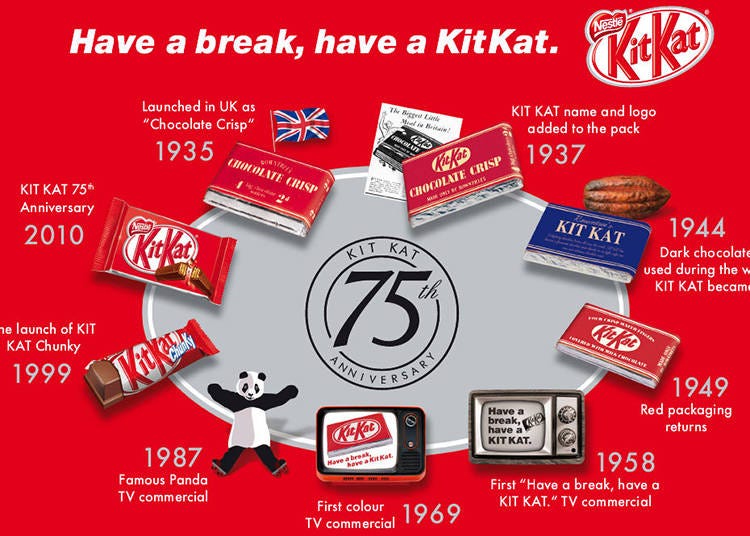 This chocolate was originally launched in Japan in 1973, and so there was a fair amount of time while it was being sold in Japan without any significant flavor changes, but it was explained to us that during this time they were developing the shape. Just like the UK, the four-finger bar was the main item, but in the 1980s they expanded to selling family-type bags which had mini two-finger bars.

So after trying different product variations of the original milk chocolate bar, they decided to try a new strategy which could work with Japanese people’s preference for new things. For a limited time a new flavor was sold as a trial, a strawberry flavored KitKat, which proved to be a hit with customers and really flew off the shelves. Since then the introduction of new flavors has proved to be a real hit with consumers. 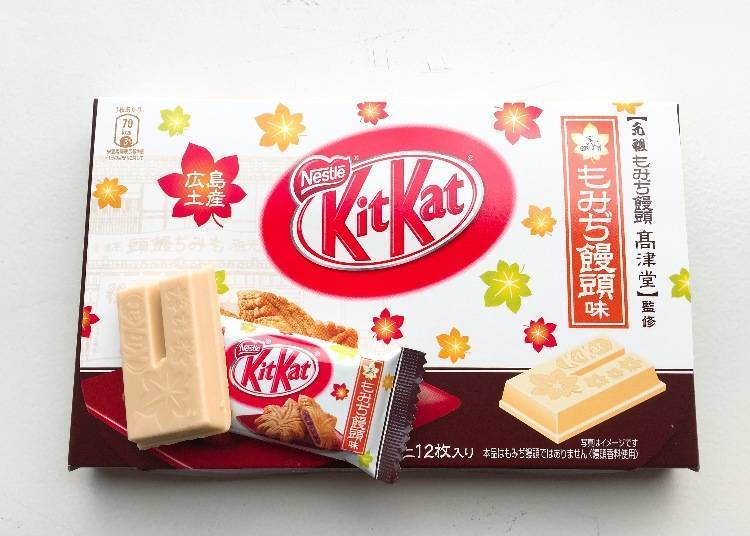 They further explained that in deciding on their flavors they think about ingredients from each region of Japan, and check whether those tastes work with KitKat, before proceeding with development.

Momiji Manju flavor was difficult as it was hard to recreate the texture and bean flavor unique to manju buns. After a bit of trial and error they hit upon the right degree of perfection to be able to make the result convincing even to people from Hiroshima prefecture, who love manju buns so much. Even today it is a popular flavor for people visiting Hiroshima prefecture. 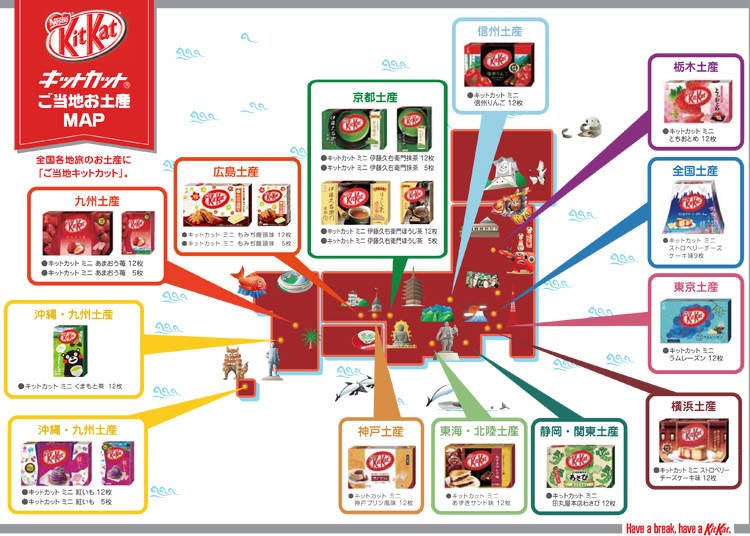 We wondered about how new tastes were being created and whether that was in response to the direction of the Japanese market, as well as the overseas appetite for Japanese KitKat. However, the KitKat representative explained that it wasn’t quite as simple as that.

They explained that consumers are aware of new flavors coming out, but there is the consideration about market trends in regards to Japanese consumers who go to supermarkets and convenience stores, as well as the products that sell well amongst overseas customers at duty free shops at airports and other areas.

However, while they are developing products according to the market and customer needs, they feel the most important thing is in fact the quality of the original KitKat. That is the key product, and like other brands the key product creates the brand’s value. They explained that if they just focused on developing new flavors, that is something that any company could just copy and do. They want to improve the evaluation of the brand as a whole, as well as its core products. 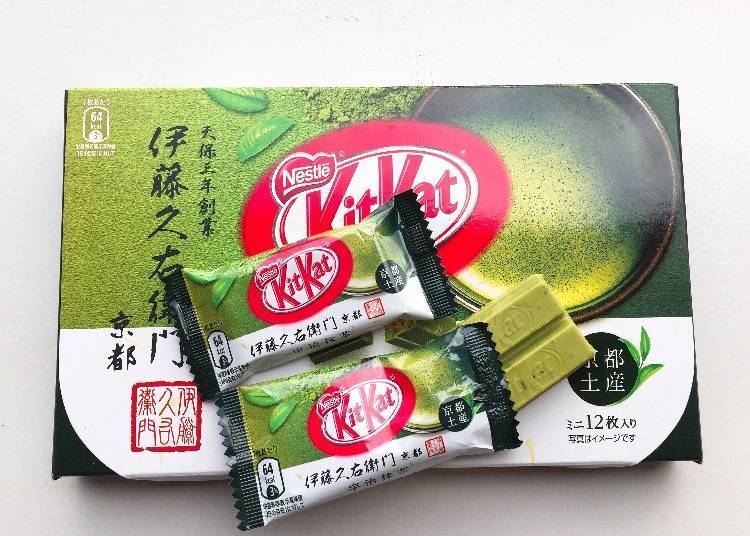 We wondered whether KitKat would consider selling the established Japanese flavors directly abroad, and they explained that since autumn 2016, they began exporting the original flavor KitKat, a slightly bitter version, as well as the matcha version, to Korea. In addition, in October 2017 the first specialty store outside of Japan in Asia opened in Gangnam, Seoul with a line-up of 10 flavors.

We thought it was interesting that the matcha flavor had been chosen for export to Korea, but also the fact that there are different matcha flavors in Japan. We asked why a Kyoto flavor had been chosen to make a Matcha KitKat. It was explained to us that the Kyoto matcha flavor was developed in collaboration with a tea brand that was established in 1832 called Itohkyuemon, this enhanced the value of the Matcha KitKat as it became a local souvenir. They felt that the two flavors of matcha which they currently sell fit in with the general increase of awareness of the health benefits that come from tea leaves.

While matcha flavor is one of the bestselling flavors, they revealed that the wasabi flavor is also a top seller, but they personally liked the sake flavor. They felt that the fruity aroma of sake really matched white chocolate, and that everyone who tried it was surprised at the high quality of its taste. 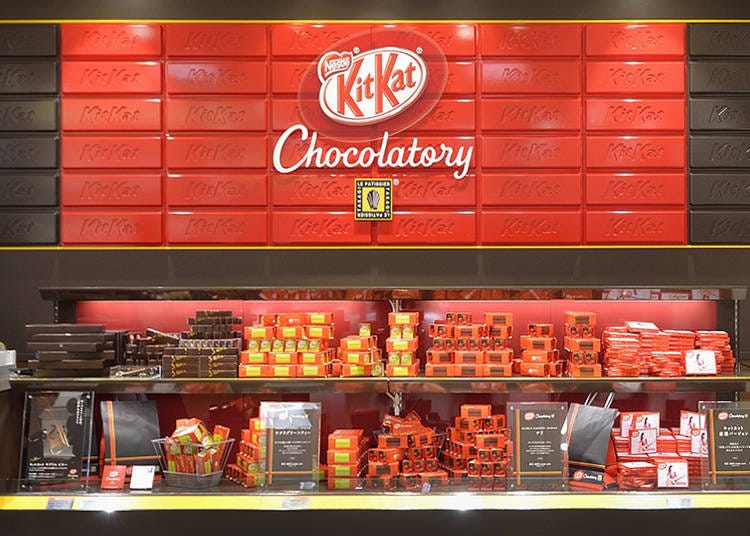 As the interview came to a close, we asked whether with the opening of a new factory in Himeji, Hyogo prefecture, whether this would aid further research and development of new products and they said that there are plans for development there, and that the factory was capable of flexibly producing small quantities of different products.

However, they also pointed out how the chocolatory stores are selling a premium KitKat with craftsmanship quality, by having a world-class chef like Takagi Yasumasa supervising the creation of special limited flavors. This was something we couldn’t dispute—a visit to a KitKat chocolatory is like nothing else on this planet!