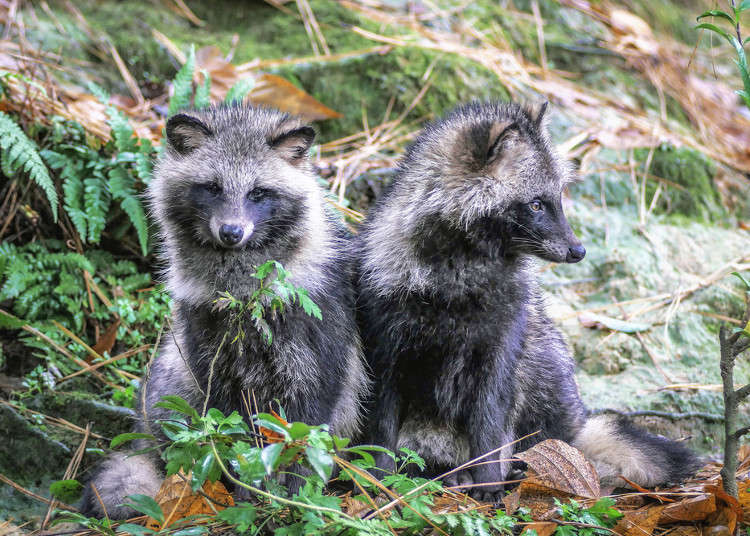 Mythology of the Japanese Tanuki: Legit Shapeshifter or Regular Animal?

When strolling through cities in Japan, you’ll often come across little shops with curious raccoon-like statues in front of them. These depict the Japanese tanuki, also called raccoon-dog due to various mistranslations, a curious animal that is native to Japan - and the protagonist of a lot of myths and stories. Let’s take a closer look!

Tricks and Magic: Old Legends of the Japanese Tanuki 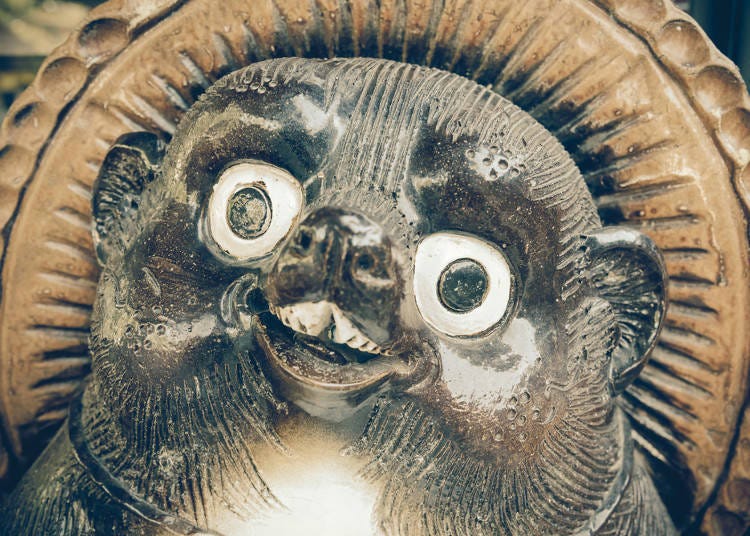 The tanuki does have a rather malevolent past. The oldest and earliest tales and legends speak not only of the possession of humans but also of shape-shifting.

One of the most famous myths surrounding the tanuki is its ability to shape-shift into the form of a beautiful woman with which it plays mischievous tricks on passersby. Despite transforming itself, the tanuki can also transform certain things, such as turning pebbles into gold, or feces into food.

A common image of this magical, malevolent creature is one with a leaf on its forehead, as this is believed to be the source of its power.

The Seat of a Tanuki’s Power: the Scrotum 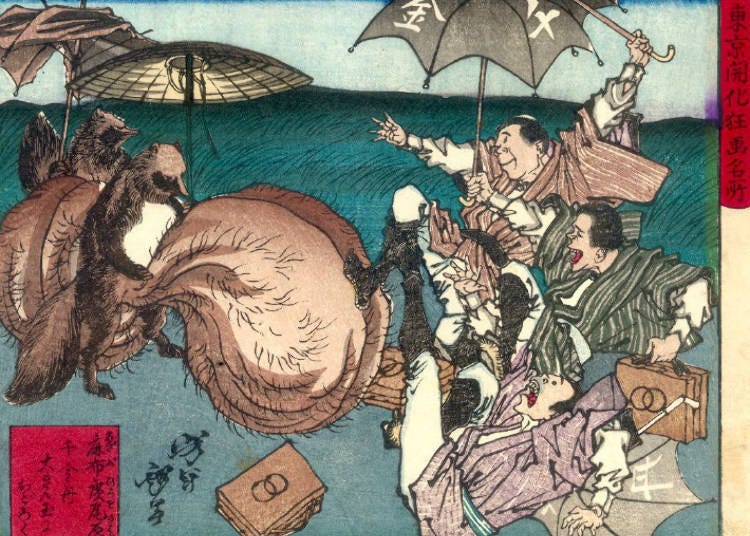 While leaves might be the source of the creature’s power, the true magic comes from a whole different body part – the scrotum. Being able to stretch and enlarge it to whatever size, this rather uncommon magical scrotum can be used for basically any purpose.

Drawings and tales depict a tanuki making a boat out of its testicles to save people from a river, or to use it as a parachute or blanket. This is why a huge majority of tanuki statues feature this enlarged scrotum, as it is believed to be a good luck charm for business.

From Menace to Merry Drinker 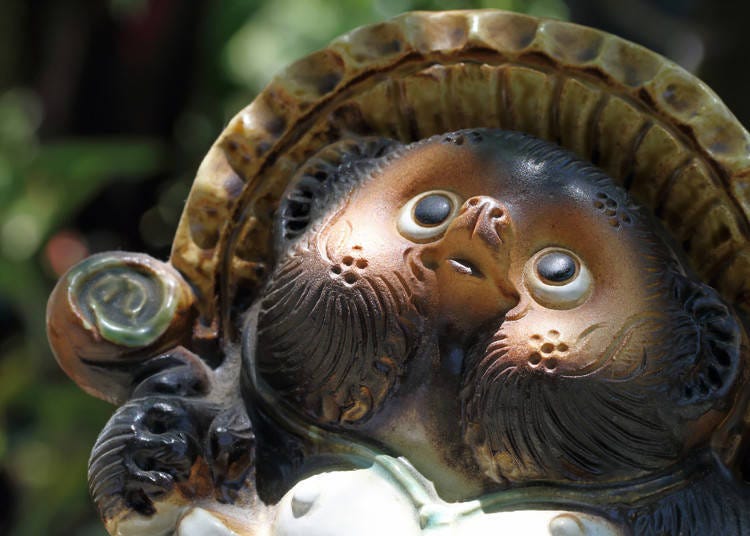 With time, the malevolent tanuki evolved into a much tamer one. While still using their illusionary magic, they were rather seen as a mild annoyance than an actual danger, known for bothering travelers, hunters, or monks with harmless tricks.

If you wander through the Japanese woods and hear music, you might just be tricked by a tanuki beating on his magical belly-drum – make sure to not follow its sound or you might end up getting lost!

This shift in perception is responsible for the very gleeful and happy depictions of today’s sake-holding tanuki statues, gracing many a shop all around the country. 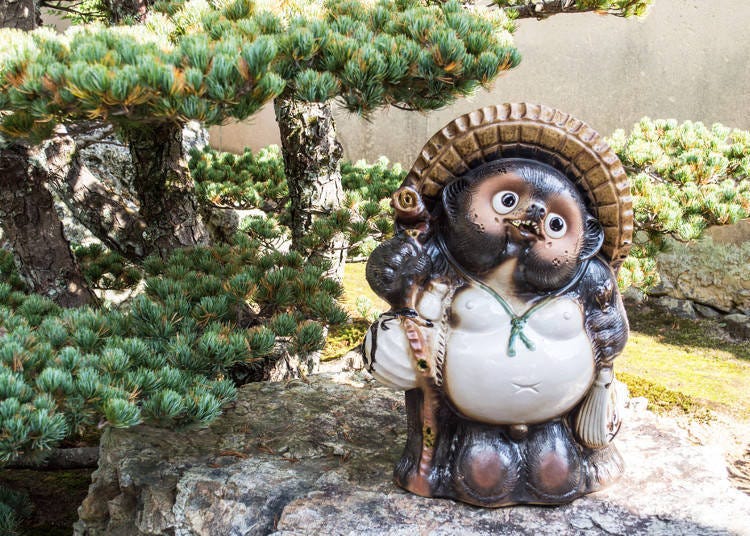 Another characteristic of these statues is the straw hat that almost every tanuki is wearing. It didn’t appear until around the 18th century and is actually a reference to an older song that tells the tale of a tanuki stealing sake from a brewery on rainy nights.

Nowadays, it is a symbol of readiness, both for bad weather and bad luck. It came to replace the magical leaf on its head over time. 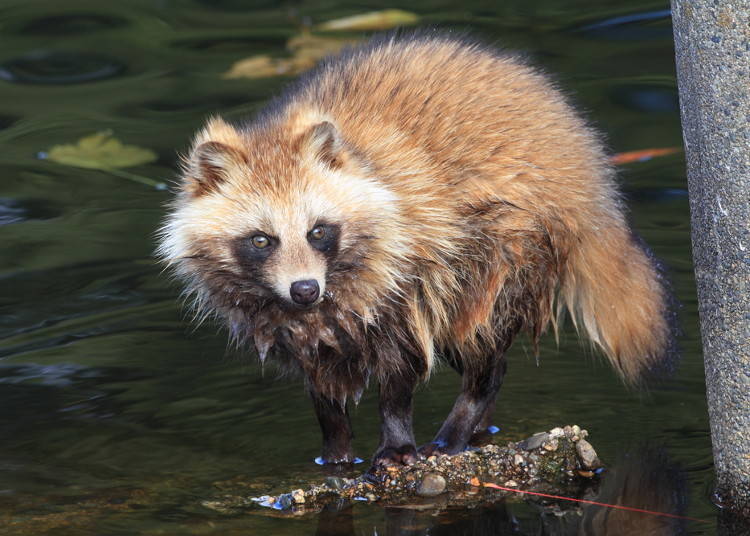 While meeting a magical tanuki can be a bit of a rare sight, encountering a real-life tanuki is not uncommon at all. Just like the raccoon, it has started to migrate to suburban and even urban areas, helping itself to delicacies left in dumpsters or even being fed by local residents.

You might just come across one of the little shapeshifters when strolling a city or village at night or during the early hours of the morning. Just take care not to be tricked by them!

You Don’t Want to Know About His ‘Money Bags’! Weird, Lucky Japanese Tanuki in Shiga
Gotokuji Temple: Tokyo's "Lucky Cat" Temple - A Must-Visit for Cat Lovers!
All about Yokai: 8 Japanese Monsters, Ghosts, and Friendly Spirits!
Japanese Daruma Dolls: The true story behind the insanely cute souvenirs!
*This information is from the time of this article's publication.
*Prices and options mentioned are subject to change.
*Unless stated otherwise, all prices include tax.