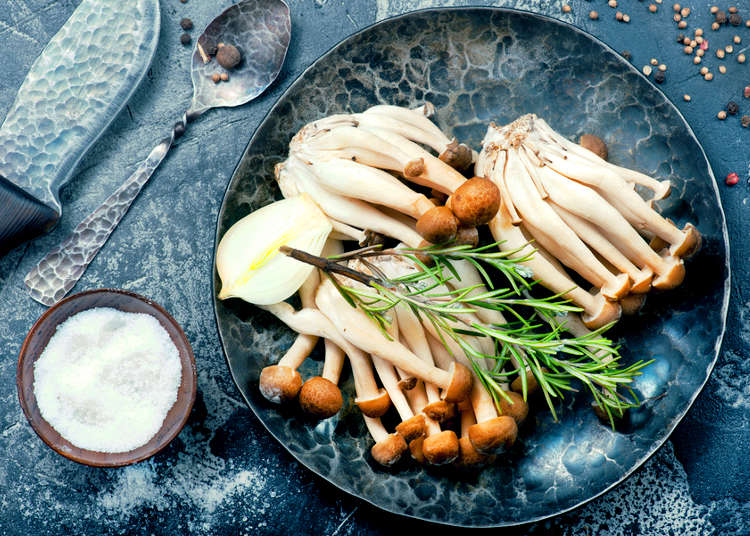 Top 7 Popular Japanese Mushrooms That Are Both Tasty and Healthy

Shiitake, eryngii, enoki, and more: mushrooms are an important part of Japanese cuisine. There probably are as many ways to enjoy the healthy treats as there are Japanese mushroom varieties itself.

While most people can identify a champignon without issues, how easily would you be able to identify the different mushrooms offered in a Japanese supermarket or restaurant? And, if you were told to make a nice dinner out of them, would you know what to do?

Fret not, however, because we’re here to help you navigate the delicious, nutritious world of Japanese mushrooms – the first thing to know is that “take” means “mushroom” in Japanese. With that in mind, let’s take a look at the seven most popular mushroom varieties in Japan. 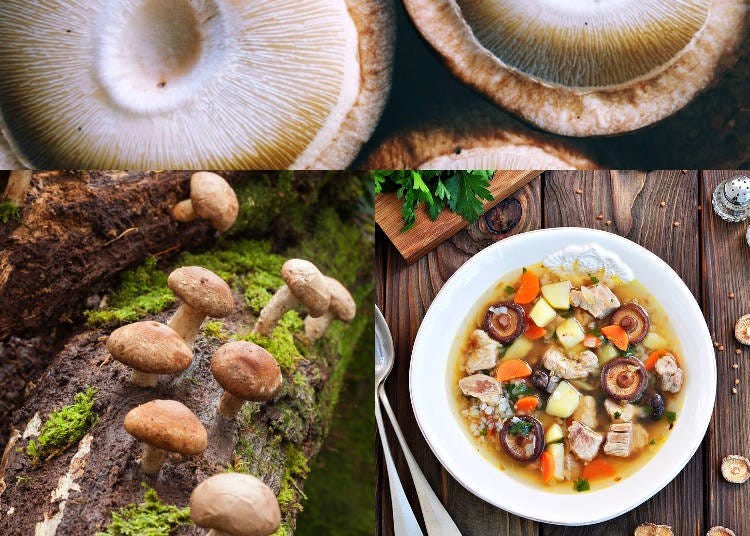 Shiitake is the one Japanese mushroom that most people will have heard of.

“Shii” is the Japanese word for one of the trees this healthy treat grows on. Combined with the Japanese for mushroom, you’ll get the word “shiitake,” or shii mushroom.

They are packed with healthy nutrients, have relatively large brown caps, ranging from tan to dark in color, and white stems. Their meatiness and distinctive smoky flavor are the main characteristics of shiitake mushrooms, making them perfect for soups, stir-fries, and the likes. On top of that, they are said to have a lot of benefits for your health!

Shiitake come dried and fresh. The dried version needs to be soaked for several hours – in any case, make sure to dry the mushrooms as best as possible before using them in a dish, as this will help to retain the texture.

As for fresh shiitake, check the tenderness of the stems. Tender stems can be left on the mushroom, the tougher ones should be removed and make for a great soup stock ingredient! 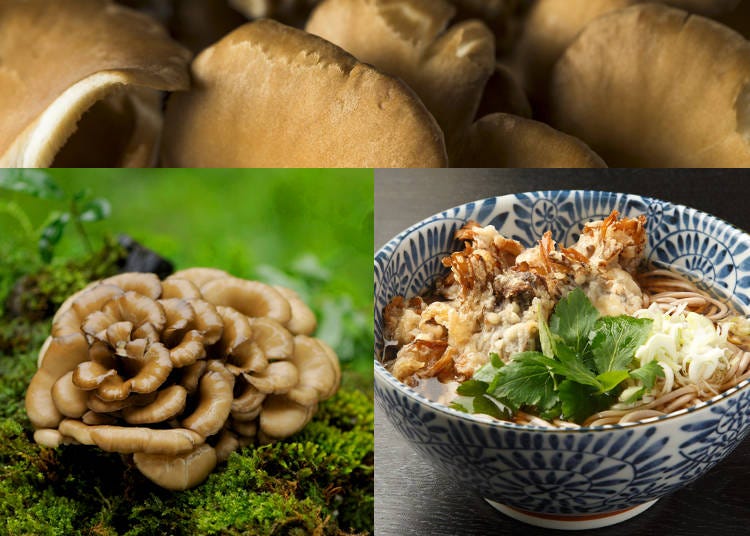 You might know it as Hen-of-the-wood or even sheep’s head, but in Japan, this funny-looking mushroom variety is called maitake. Literally translating to “dancing mushroom,” this healthy fungal delicacy can be found in Japanese hardwood forests, as well as in parts of China, Europe, and North America.

Maitake mushrooms have a fairly soft texture without the usual squeakiness that is characteristic of so many mushrooms. The white, tough base grows into numerous feathery leaves – those can simply be pulled apart once removed from the stem, no knife required!

Maitake have a strong flavor for a mushroom, rich in an earthy, spicy flavor that makes them perfect for sautéing. The main maitake season is between September and October, but they can be found on farmers’ markets both in the States and in Japan almost all-year-round. 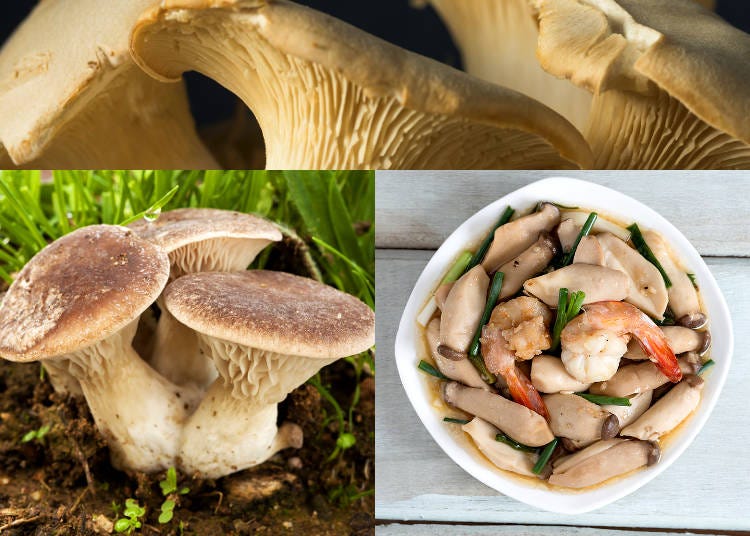 ..or eringi, King Trumpet, King Oyster, and French Horn. Eryngii mushrooms go by many names and are the largest of all oyster mushrooms.

It doesn’t only grow in Japan and other parts of Asia, but also in Mediterranean Europe, the Middle East, and North Africa. You can easily recognize it by its characteristic meaty, white stem and relatively small, brown cap.

While eryngii mushrooms have almost no flavor or aroma when raw, it turns into a real healthy flavor bomb once cooked, grilled, broiled, or otherwise prepared. They’re a great substitute for meat, especially in vegetarian and vegan dishes! 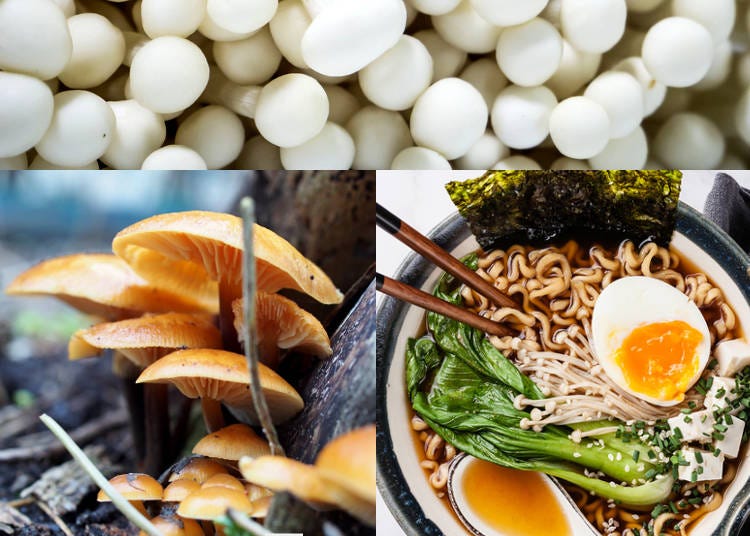 These little Japanese mushroom clusters called enoki or enokitake are thin, long, and fragile, much like little flowers. They’re a well-used ingredient not only in Japanese cuisine but also in Chinese and Korean, and because their main season lasts from September to March, they are sometimes called “winter mushroom” in English.

Enoki are cultivated extensively and available in any Japanese supermarket at any time. To check the mushrooms’ freshness, look at their stalks and caps. Slimy, brownish stalks should be avoided, while white, shiny caps indicate a fresh and delicious enoki!

Enoki mushrooms have a slight crunch to them that balances the relatively mild, fruity flavor. They make an excellent, healthy addition to both soups and salads.

Bonus fact: wild enoki have a brownish-orange color, while cultivated enoki have never been exposed to light and thus are white. 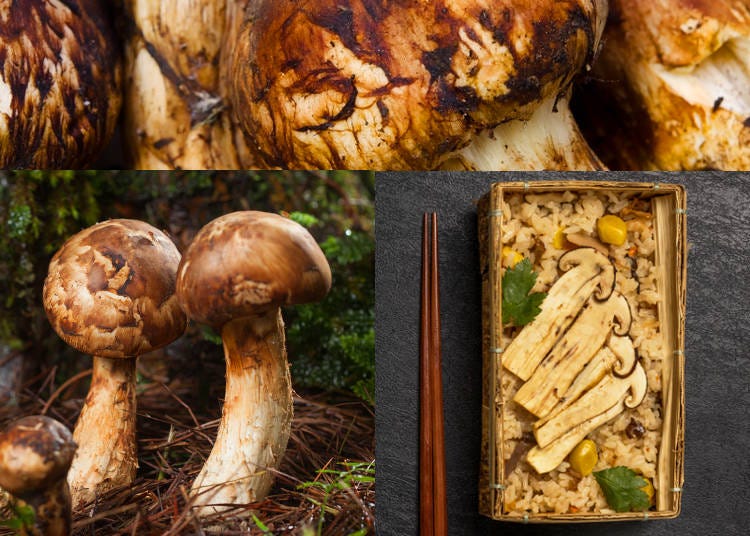 Mushroom lovers are sure to know matsutake, a prized, sought-after mushroom that is famous for its characteristic spiciness.

While matsutake mushrooms grow in Asia, Europe, and North America, it can prove extremely hard to find, as it requires a very specific kind of forest and terrain to grow. In Japan, they can mainly be found under red pines and the first matsutake harvest in fall can fetch prices of 1,000 dollars or more per kilogram! According to historical documents, matsutake picking was also a favorite pastime of samurai.

As already mentioned, matsutake have a strong, spicy taste and aroma – this is precisely why they are so sought-after.

As far as Japan’s famous seasonal cuisine goes, matsutake mushrooms are a healthy, luxurious autumn ingredient that you should absolutely try if you get the chance. 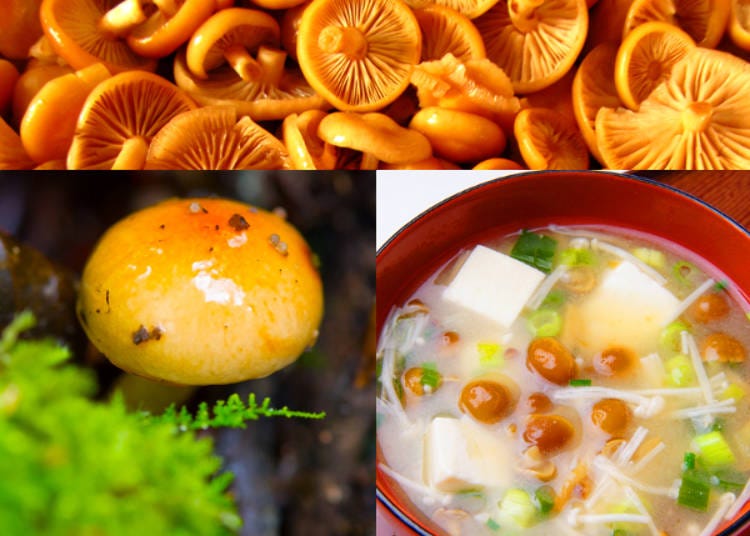 Nameko is a curious little Japanese mushroom variety. In nature, it appears as a cluster of small mushrooms with orange caps that have a characteristic gelatinous coating. In Japanese pop culture, they’re a fairly famous comic character that first appeared in the DS game “Touch Detective” – you might know the little fellow as “Funghi.” Now, Nameko has his own mobile game called Mushroom Garden.

The mildly nutty taste makes the mushroom a staple ingredient of Japanese cuisine and you’ll often see it used in stir-fries and for noodles. However, the slime on the cap also acts as a natural thickener and thus makes nameko perfect for soups, as this slime doesn’t have a taste of its own once cooked!

You’ll also encounter nameko as a popular and healthy ingredient in sushi rolls, and are a popular a "neba-neba" dish. In the States, this little orange delicacy is also called “butterscotch mushroom.” 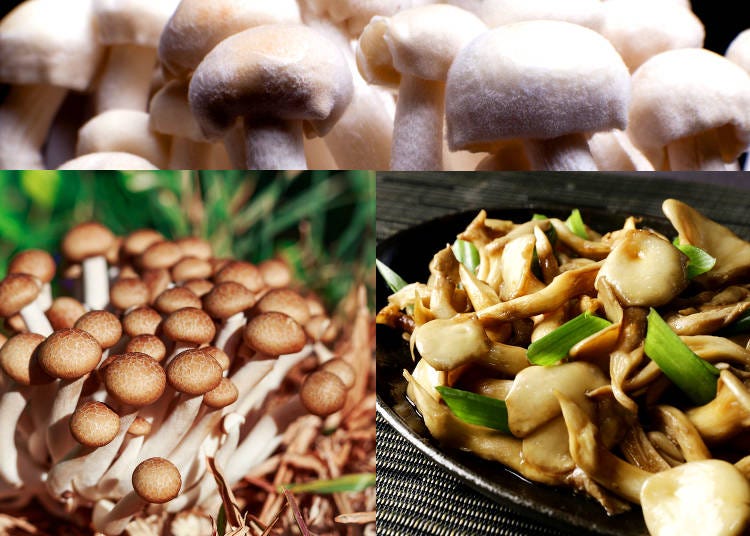 Found in East Asia and Northern Europe, shimeji is actually a group of mushrooms that come in different shapes and colors.

They all have a similar texture and taste, however – while the raw mushrooms are slightly bitter, this unpleasant aroma disappears entirely when cooked, leaving you with a delightfully crunchy texture and mild, nutty flavor.

As far as dishes go, shimeji mushrooms can be used for pretty much anything. From stir-fries to soups, from hot pots to pasta dishes, and even as a side or sauce to game and seafood – the versatile mushroom variety makes for an excellent addition to almost any dish. They are a great, healthy choice if you don’t know where to start your journey into the world of Japanese mushrooms.