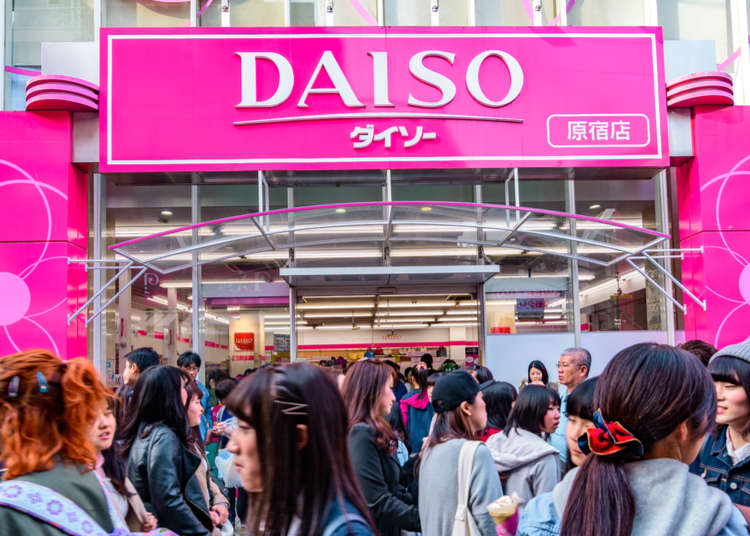 7 Secrets About Daiso Japan, The Fun and Quirky 100-Yen Shop!

Daiso is one of Japan’s 100-yen shop brands, known for offering a massive variety of unique and quirky products. Almost everything can be bought for a mere 100 yen (that’s less than a dollar!), with only a few exceptions. Daiso Japan’s selection boasts an astounding 70,000 different items! Here, you’ll find everything you need to enhance and fancy up your daily life.

Browsing the colorful aisles is surprisingly fun, as you’ll stumble upon all kinds of little treasures you never knew you wanted! One of Daiso’s biggest draws is that despite the low price, all of its goodies are of astoundingly high quality. That, of course, makes shopping there even more exciting – if you see something that strikes your fancy, take it home! Let’s uncover seven secrets about Daiso!

5 Sold per Second! What are those Super Popular Daiso Products? 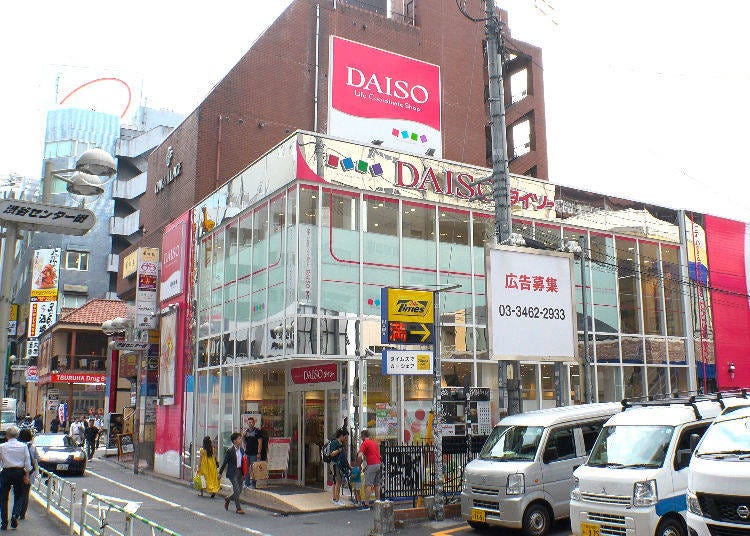 Cases, kitchen goods, snacks, cosmetics, stationery, DIY goods... some of Daiso Japan’s items are so popular, five are sold every second! The king of the shop is batteries, who would have thought? Throughout the country, it is by far the most-sold item, with 147,500,000 batteries sold every year! 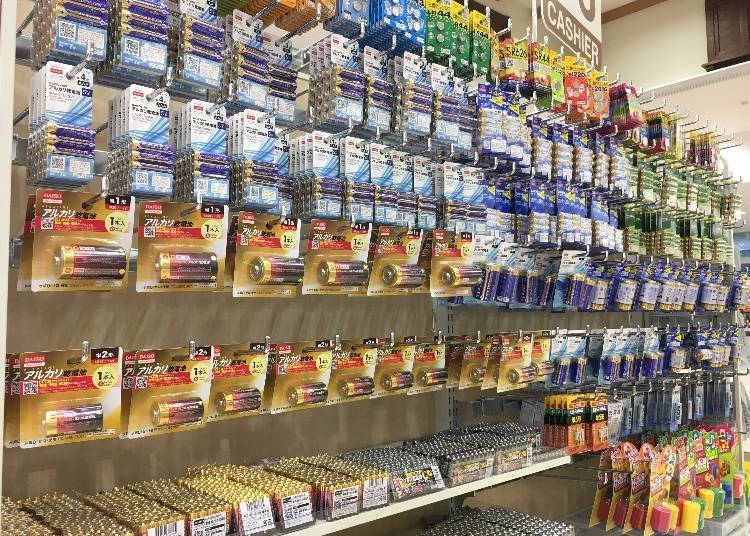 Other items, such as the ones we’re about to introduce, hold similar “sold in seconds” records. 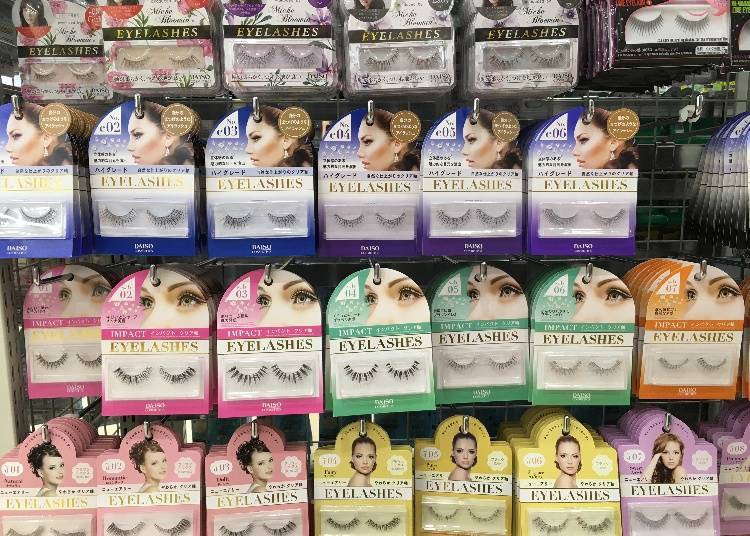 One sold every 1.3 seconds: fake eyelashes! 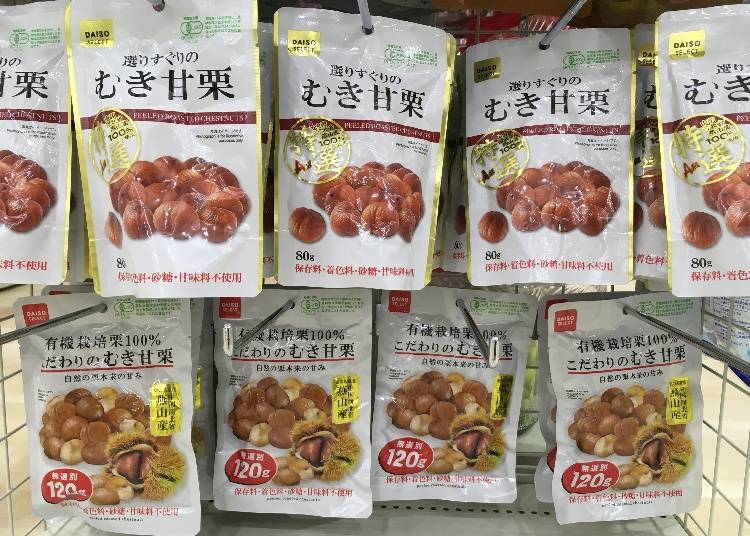 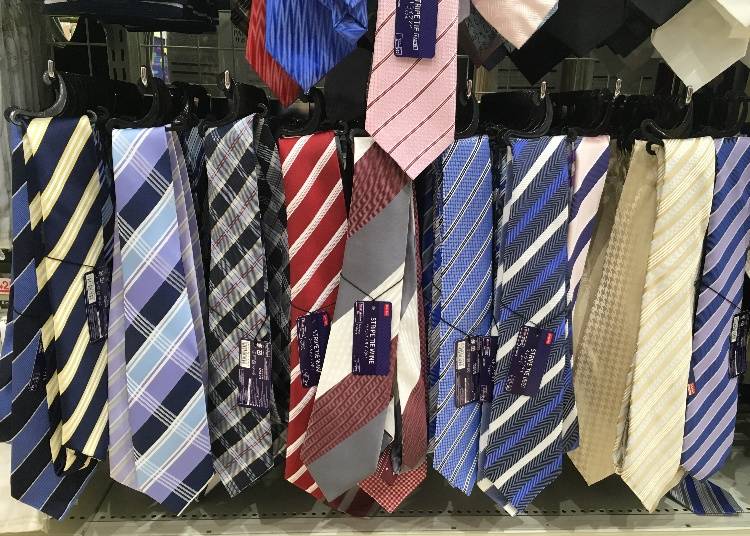 One sold every 15 seconds: neckties! 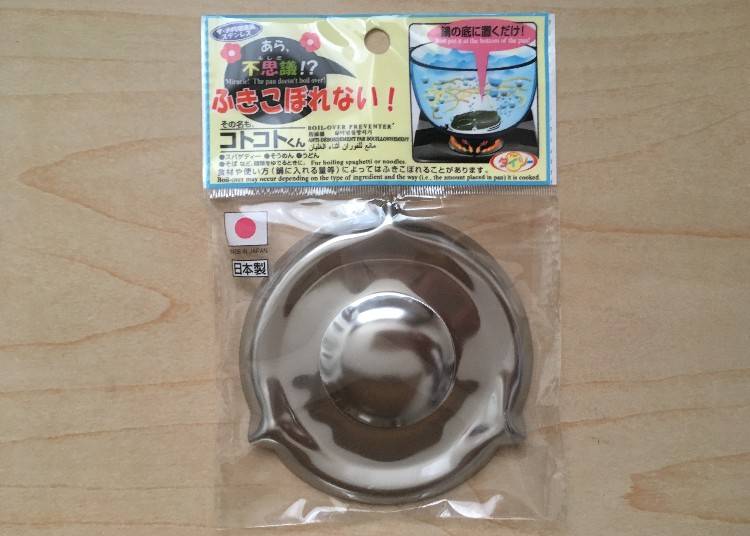 We asked Daiso’s staff to show us those items of the total selection of 70,000 goodies that are evergreen top sellers and enjoy steady popularity.

Koto-Koto-kun
Everyone knows the issue of cooking pasta in a small pot – there’s too much white foam that boils over! This little kitchen helper called Koto-Koto-kun is here to save you from all that trouble!

We put it to the test and cooked spaghetti with Koto-Koto-kun in the pot. 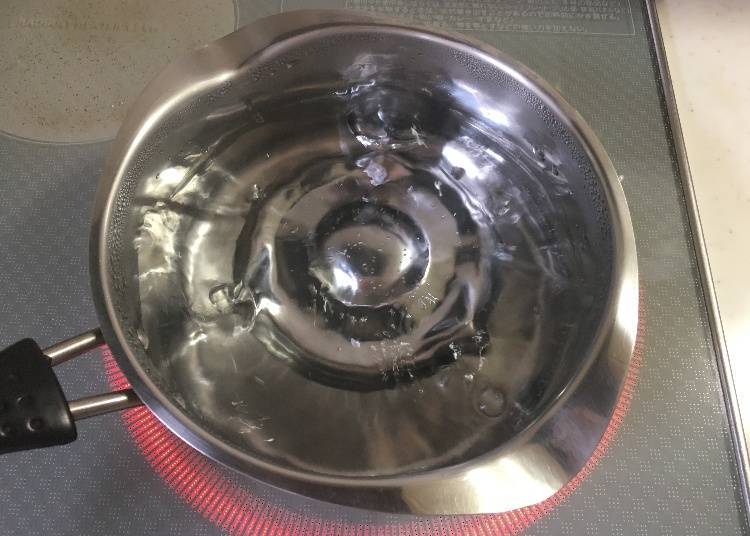 It sits at the bottom of the pot and has three protruding openings that act like vents for hot air. When we added the spaghetti to the boiling water and changed to medium-high heat... 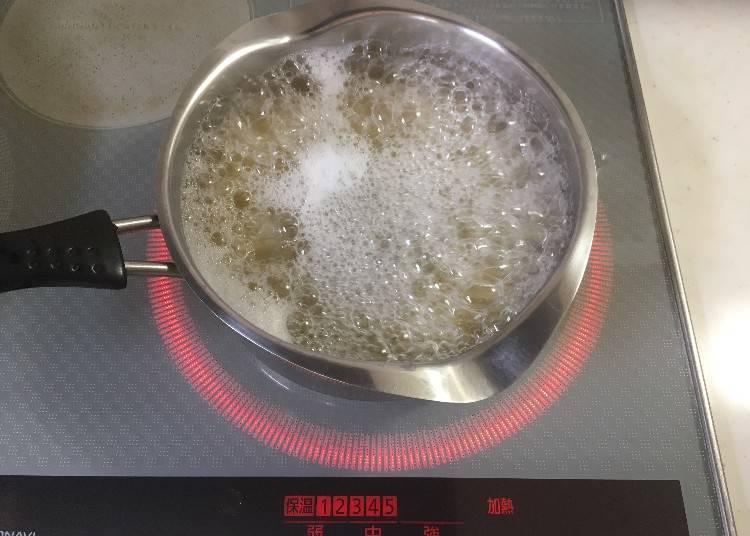 ...they did not boil over at all! Hooray!

Kantan Gyoza
Gyoza are Japan’s version of potstickers and so delicious, you’ll find yourself craving them all too often. While ready-made gyoza may be hard to come by outside of Japan, the “Kantan Gyoza” item helps you to make them at home with astounding ease! 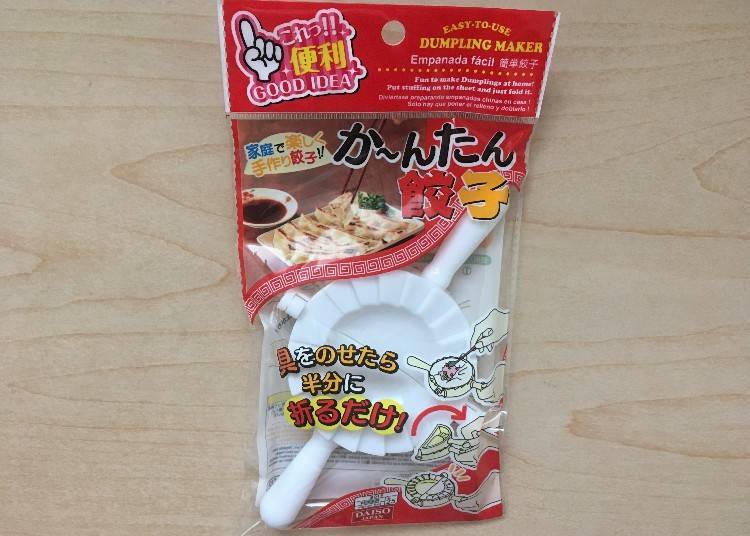 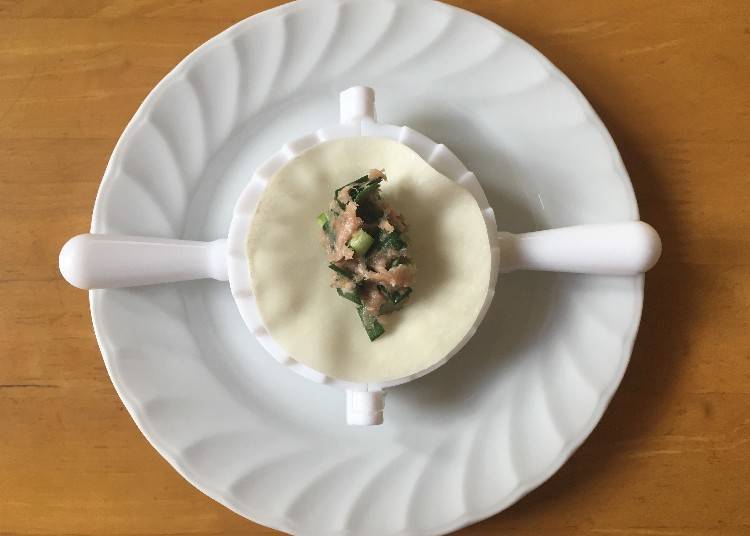 First, put the wrapper in place and add the stuffing. 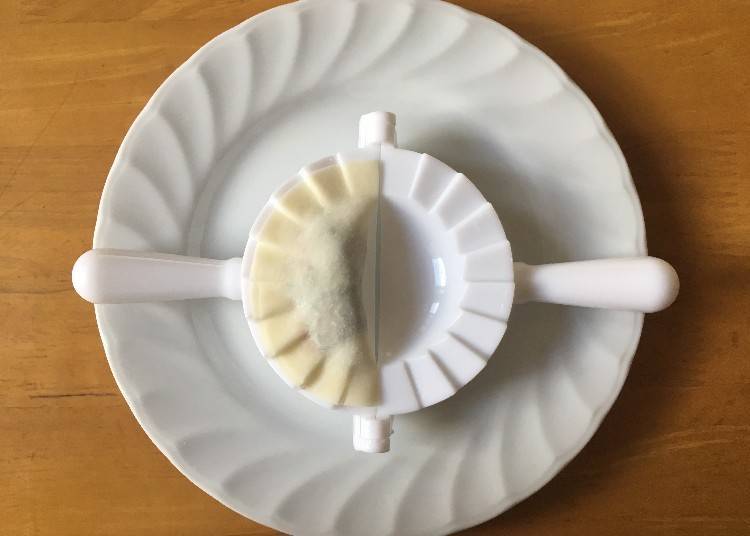 Pull the little lever and the gadget will fold your gyoza in half, giving it a perfect shape! It can’t get much easier than that. 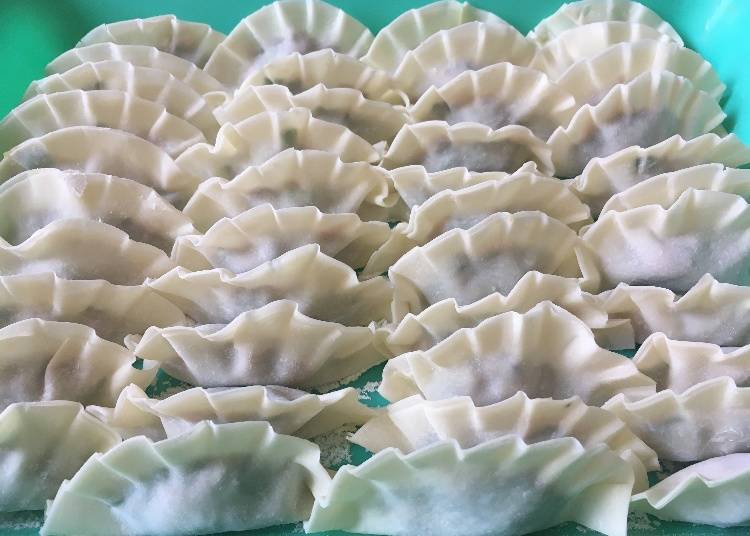 Impress your friends with your cooking skills and absolutely flawless Japanese potstickers!

About 230,000 People Shop at Daiso Every Hour Throughout the World! 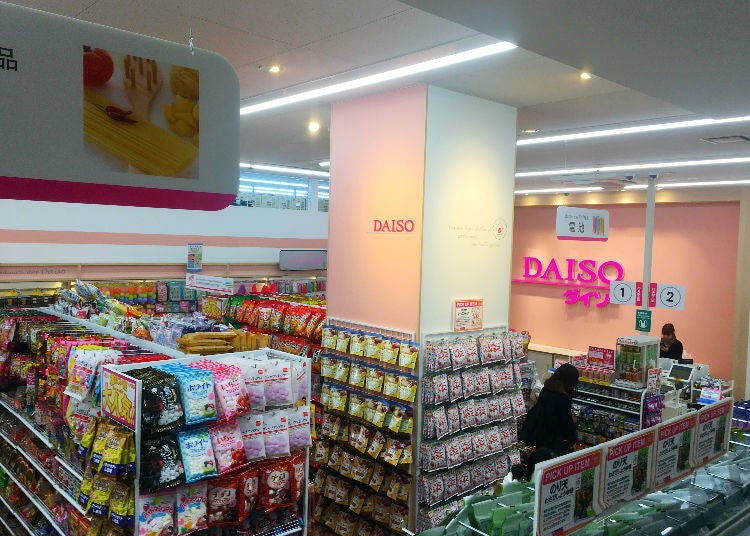 Daiso provides high-quality goods for only 100 yen. The secret to this ridiculously low price is “global expansion!” By now, the 100-yen shop has more than 5,000 stores throughout the world. This “multi-store development” allows Daiso to sell its goods so cheaply, and it seems that purchasing them in a massive quantity further helps to keep the price low. 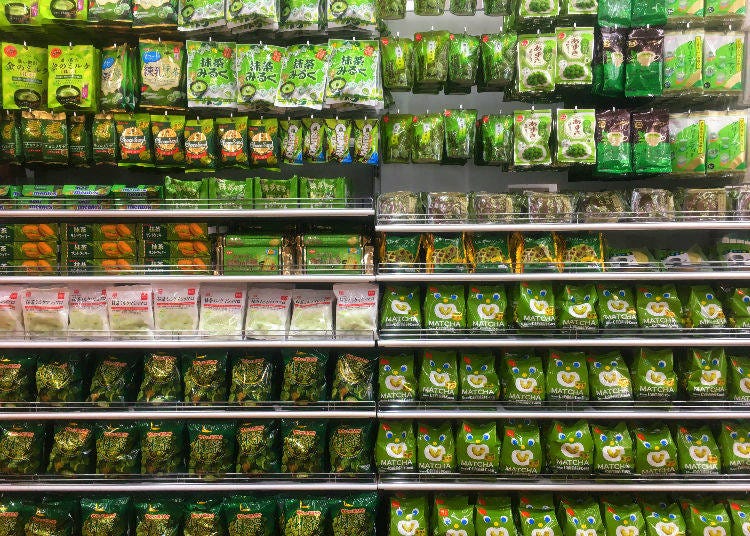 As of October 2017, Daiso boasts about 3,150 stores in Japan and about 1,900 stores worldwide. Daiso can be found in 26 countries across Asia, North America, Central and South America, the Middle East, and Oceania. Each year, about one billion people shop at Daiso worldwide – that’s 2.3 million per day and 23,000 per hour! 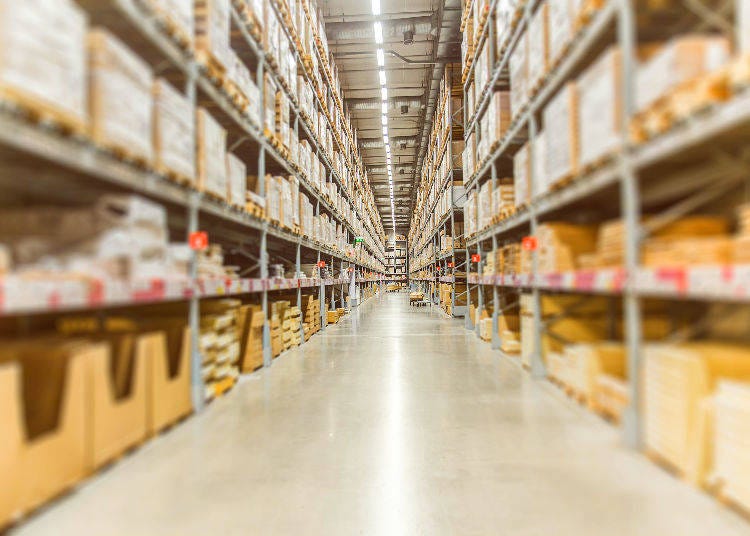 Of course, Daiso Japan has its own huge logistics network to deliver the masses of Daiso products to both Japanese and international stores quickly, accurately, and safely. There are eight regional distribution centers in Japan, including the largest in the entire country, as well as sixteen overseas that also partly serve as factories.

The automated warehouses are Daiso’s pride; fully automated cranes pick up the correct items all by themselves. Next, these items are sorted by a Box Sorter that goes at a speed of 4.8km/h! It manages to sort the inventory of about 150 ~ 200 stores at the same time, a process done entirely automatically for each delivery route.

Until a while ago, Daiso shipped everything using standard cardboard boxes. Recently, however, the brand switched to foldable resin containers that have smart tags to identify their target store. Because these containers are reusable, they do not only cut the costs quite substantially but are also much friendlier to the environment.

The total space of all warehouses adds up to 800,000 square meters, an area that could fit the massive Tokyo Dome 16 times! Furthermore, about 200 containers are imported from overseas to Japan every single day.

What are Daiso’s “Only in Japan” Goods? Which Ones are the most “Japanese-style?” 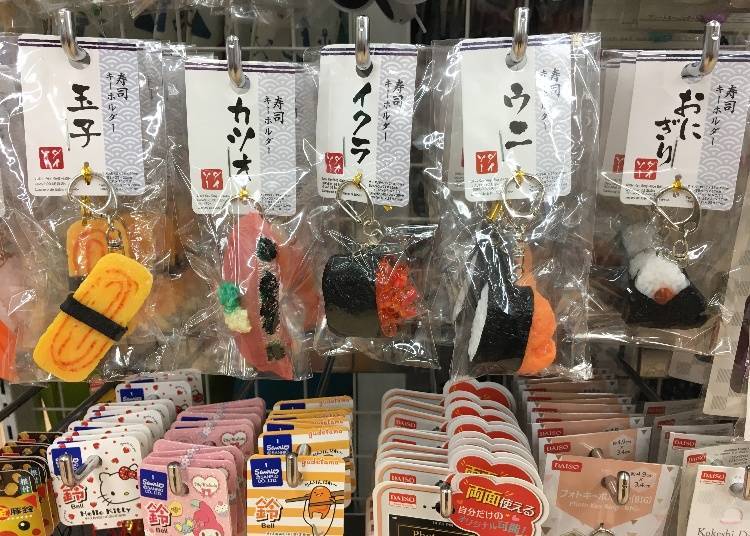 The most “Only in Japan” goodies can be found in the categories of bento boxes, Japanese miscellaneous goods, and Japanese tableware. While everything can be found at international locations as well, Japan’s Daiso stores have a particularly large stock. With their uniquely Japanese references and design, they make for excellent souvenirs! 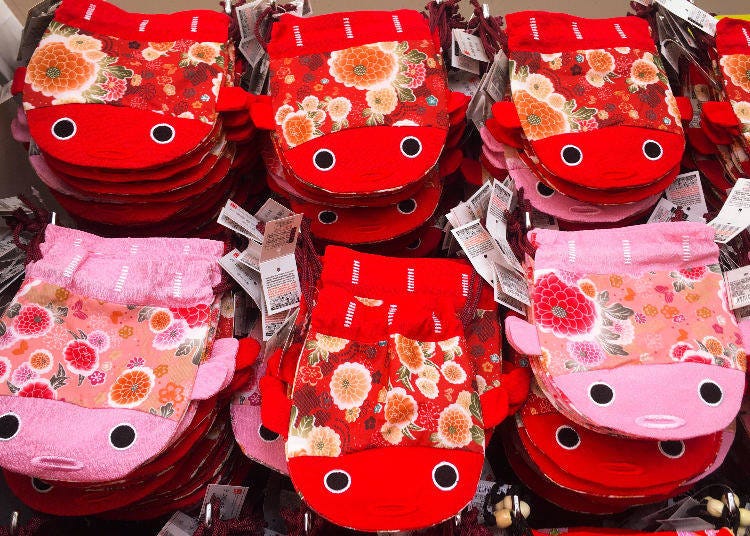 Colorful Goldfish Purse, Large
This adorable drawstring purse blends traditional aesthetics with an irresistibly cute goldfish design! Its size while closed is about 14.5cm × 14.5 cm. Japanese floral patterns adorn both the front on the back, while the head and tail of the fish are made with beautiful embroidery on the crepe-like fabric. 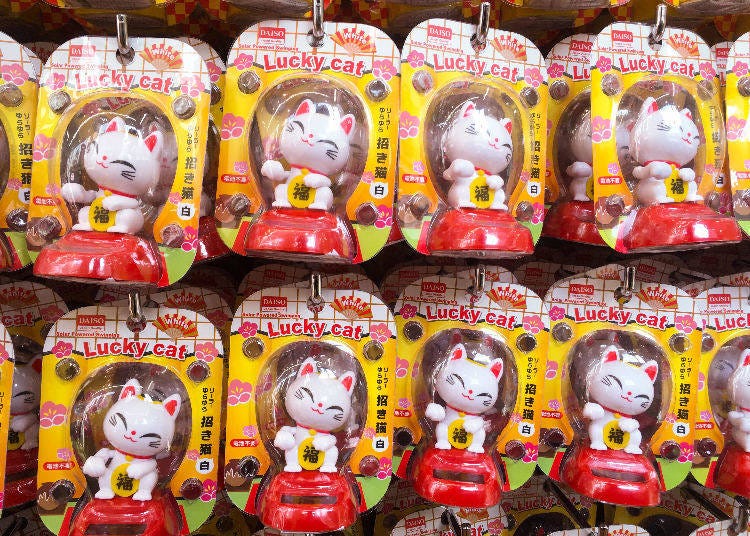 Solar Series: White Lucky Cat
This little friend perfectly fits into the palm of your hand. When the little fellow starts to wave its paw up and down, you won’t be able to resist a smile! Since its entirely solar-powered, no batteries are necessary. Find a nice, sunlit spot for the lucky cat and enjoy an extra dose of happiness! It even features double-sided tape on the bottom, making it a perfect decoration for pretty much any surface! 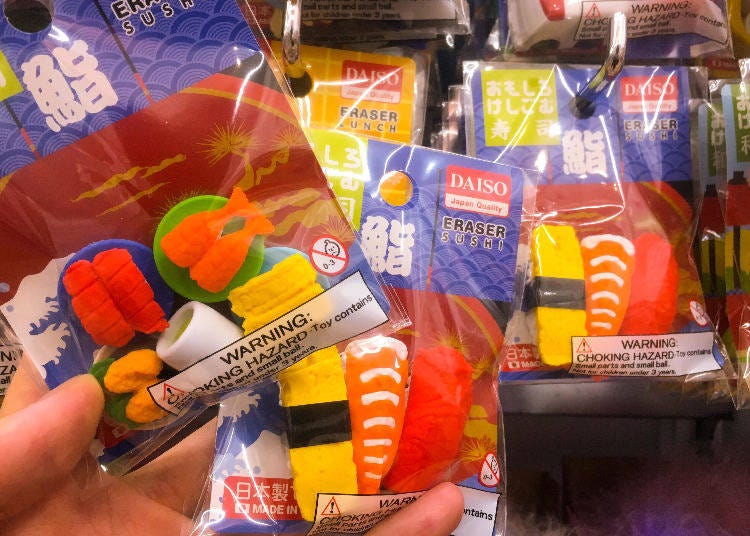 Sushi Erasers
These tasty-little erasers are sure to make you hungry! About 2.5 cm in size, they’re an adorable addition to your stationery arsenal. If you look closely, you’ll notice all the individual rice grains! They don’t just look amazing, though, they also do an excellent job as erasers.

Daiso Japan Develops About 700 New products Each Month! How is that Possible? 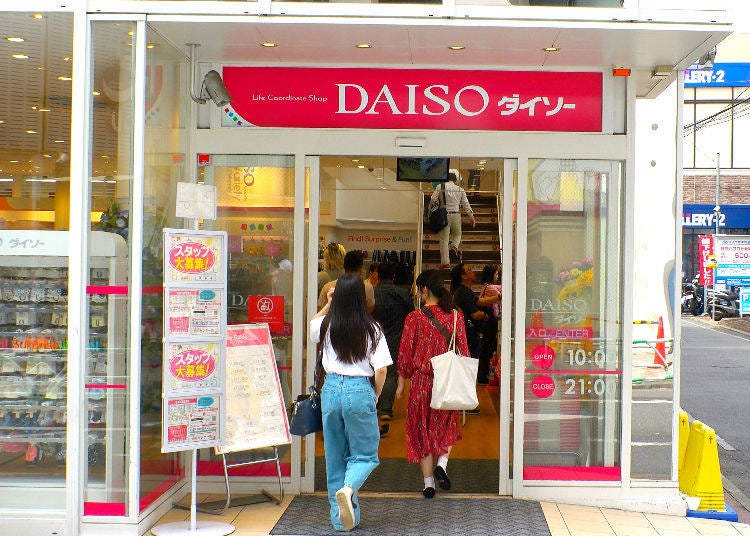 Daiso teams up with over 1,400 manufacturers in 45 countries and 8,000 factories in 45 countries. About 30 Chinese people, Korean people, people of Japanese descent throughout the world, and buyers of various nationalities enjoy close relationships with Daiso, connecting the company to local businesses. 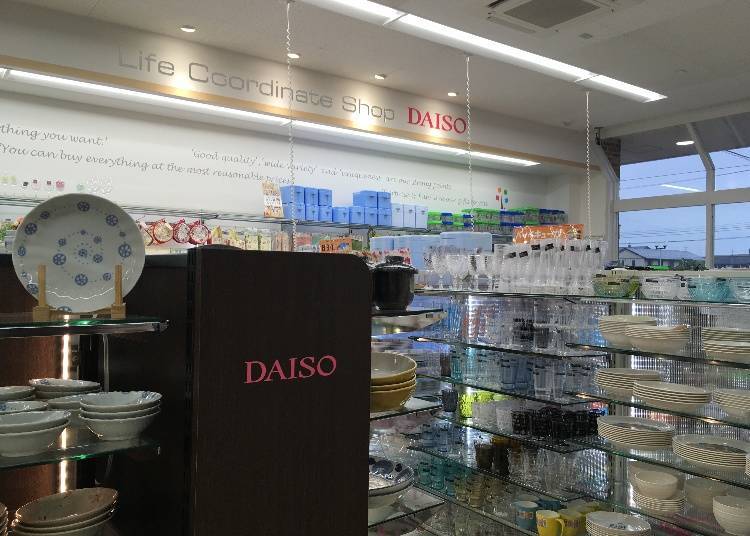 With 70,000 unique items, it’s easy to imagine that inventory control is quite a challenge. Since so many new items are released every month, the staff carefully checks the situation: “What’s not so popular, what doesn’t sell well?” This check is done every day, so there are a steady review and exchange of goods.

Daiso’s Headquarters are in Hiroshima! 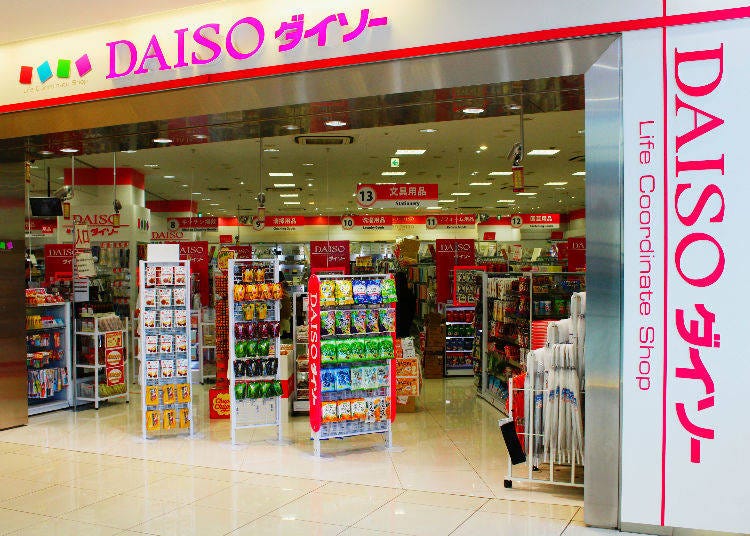 It may come as a surprise that Daiso Japan’s headquarters is in Hiroshima City in Hiroshima Prefecture. Located in a part of Japan called Chūgoku, it is a popular tourist destination with sights including Itsukushima Shrine, the Atomic Bomb Dome, and famous foods such as okonomiyaki or momiji manjū. Hiroshima is also home to several other Japanese companies. Among them is the automaker Mazda, the snack brand Calbee, as well as the very first store of the clothing chain Uniqlo. 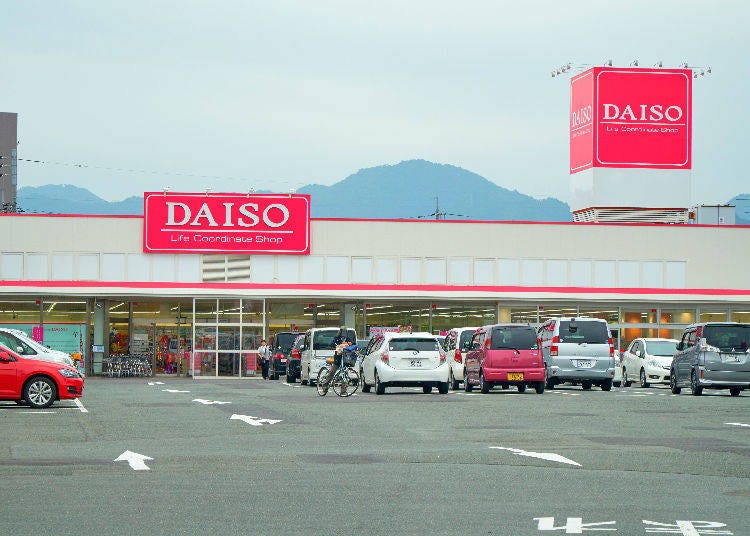 Daiso Japan was born from a shop called Yanō Shōten, specializing in household goods. In 1977, it became Daiso Industries Co., Ltd. and in 1991, the first directly-managed shop opened its doors in Takamatsu City, Kagawa Prefecture. Ten years later, the first Daiso was opened in Taiwan in August 2001. Just a month later in September, Korea got its first Daiso and from thereon to this day, new stores are opened every year. The only year when Daiso did not get a new overseas location was 2013.

Why is that? Between 2012 and 1014, Daiso constructed its eight regional distribution centers in Japan, of which five started their operation in 2013. All efforts went into these warehouses during that year, the foundation of Daiso Japan’s current logistics system. It’s a story of quick development and expansion that doesn’t seem to stop anytime soon! 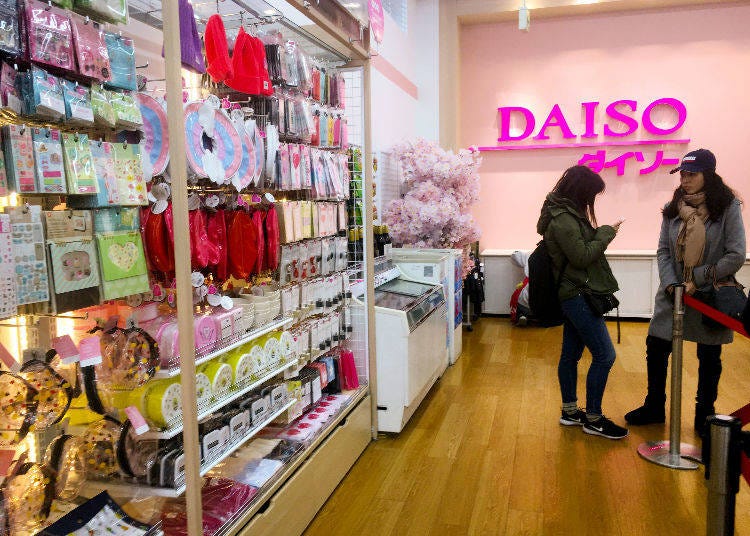 Interestingly enough, there’s barely any commercials or ads for Daiso in Japan. And yet, it is one of the most popular stores that you absolutely have to visit at least once while in Japan! We asked a Daiso spokesman about why everyone loves the 100-yen shop so much and they simply answered: “Because we always develop shops and products, so people never get bored.”

Daiso really is a shop that brings color into people’s daily life with fresh and unique ideas. By all means, stop by and experience the power of Japan’s manufacturing firsthand! On top of that, who knows what little surprises you’ll find in Daiso’s aisles!

Most Popular Products at Daiso Shinsaibashi Store!
Daiso Osaka: Japan’s Famous 100 Yen Shop – Top Popular Goods With Osaka Tourists!
Makeup and Skincare Must-Buys at Best 100 Yen Shop Daiso!
*This information is from the time of this article's publication.
*Prices and options mentioned are subject to change.
*Unless stated otherwise, all prices include tax.