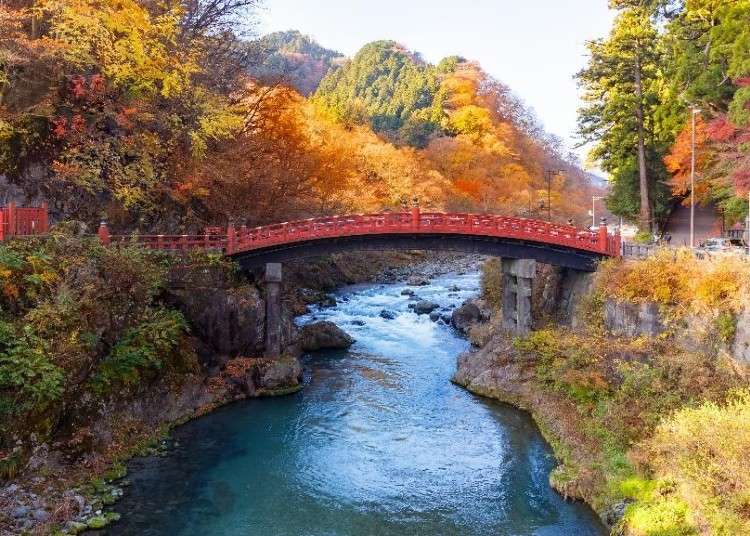 One of the best times to experience the natural beauty of Japan is during the fall foliage of autumn. The blend of quintessential Japanese icons like temples and gardens dyed in vivid reds and yellows leaves an unforgettable impression on all those who witness it.

Here, we’ll introduce 7 places in the outskirts of Tokyo to discover the pinnacle of Japanese fall scenery - the Hakone Ropeway and Oyama-dera in Kanagawa, Nagatoro Iwadatami in Saitama, the Shinkyo Bridge in Tochigi, and Mt. Takao, Mogusaen, and Mt. Mitake in Tokyo.

With each spot being located in Kanto, they’re all super easy to access and make for excellent stops on your autumn tour of Japan! 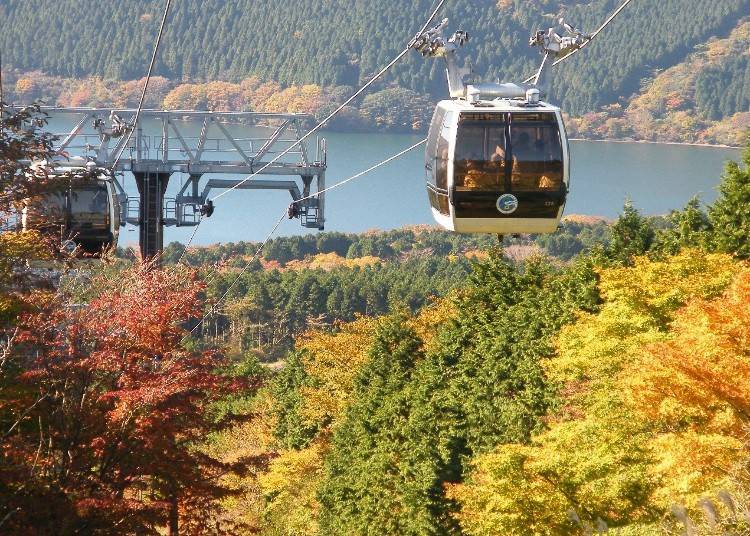 The scenery of Hakone, one of Japan’s most renowned onsen hot spring regions, is best taken in from above on the Hakone Ropeway.

Using the Odakyu Hakone Highway Bus, you can get from Shinjuku Station Expressway Bus Terminal to the Hakone Ropeway’s Togendai Station without changing lines, making travel a breeze!

There are four stops on the Hakone Ropeway: Togendai Station, Ubako Station, Owakudani Station, and Sounzan Station. The journey takes roughly 25 mins, and the steep, high-altitude climb will make you feel like you’re walking through the sky! 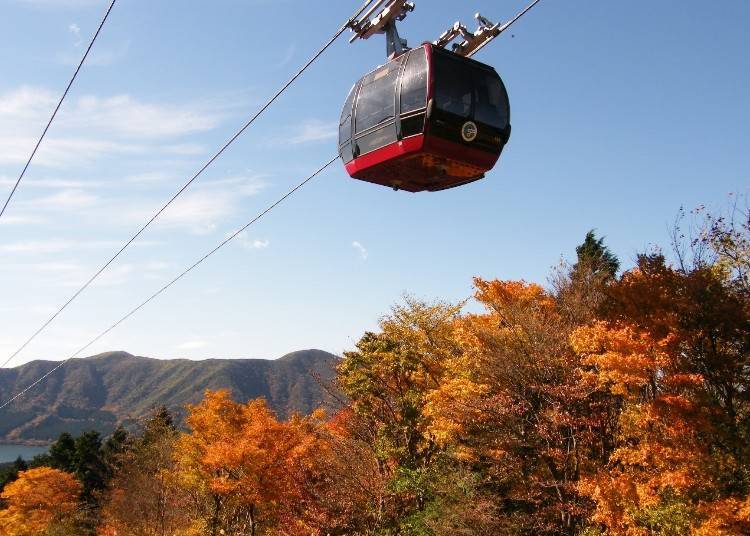 The best time to visit the Hakone Ropeway in autumn is during mid-November when the dazzling fall colors will be at their peak.

If the weather is nice, you’ll also be able to spot Mt. Fuji in the background, which also looks spectacular in autumn!

From the ropeway, you’ll traverse over Owakudani, which was formed in the aftermath of an eruption at Mt. Kamiyama. Even today, white smoke rises from the ground while the imposing, rocky landscape serves to remind one of the intensity of nature.

2. Oyama-dera: A Tunnel of Maple Leaves! 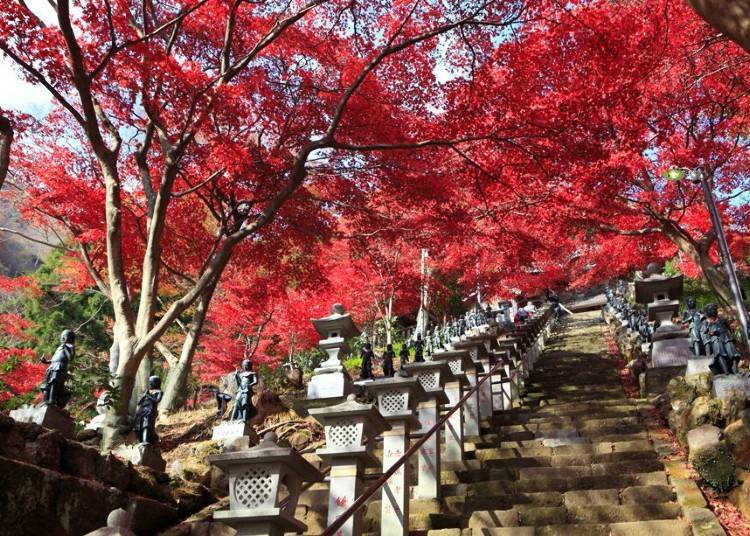 Oyama-dera, located in Isehara, Kanagawa, is a historical mountain temple founded by Roben, a Buddhist monk who also opened the legendary Todaiji Temple in Nara.

The ancient main hall is famed for its powerful and commanding statue of Acala, a Buddhist deity known as Fudo in Japanese who is enshrined at the temple.

Access
The temple can be reached after a brief 3 min walk from Oyama-dera Station on the Oyama Cable Car (also reachable entirely on foot without using the cable car). To find the Cable Car, take the Limited Express Romancecar train on the Odakyu Electric Railway from Shinjuku Station until Isehara Station. Then ride the Kanagawa Chuo Kotsu bus until the final stop of “Oyama Cable” and walk down the Koma Sando Shopping Street until you reach the cable car station (roughly 15 mins).

On the Onnazaka course from Oyama Cable Station to Oyama-dera are the “Oyama Seven Wonders” dotting the area, making the journey itself just as thrilling as the destination. 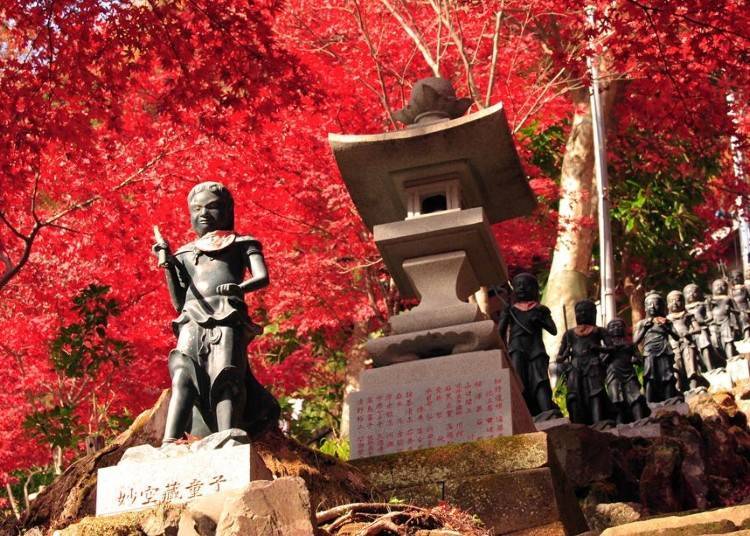 Oyama-dera is also a renowned spot for autumn foliage around Tokyo, with the path to the main hall and its rows of prospering trees creating a natural “foliage tunnel.” The best time to see this is generally between mid to late November. 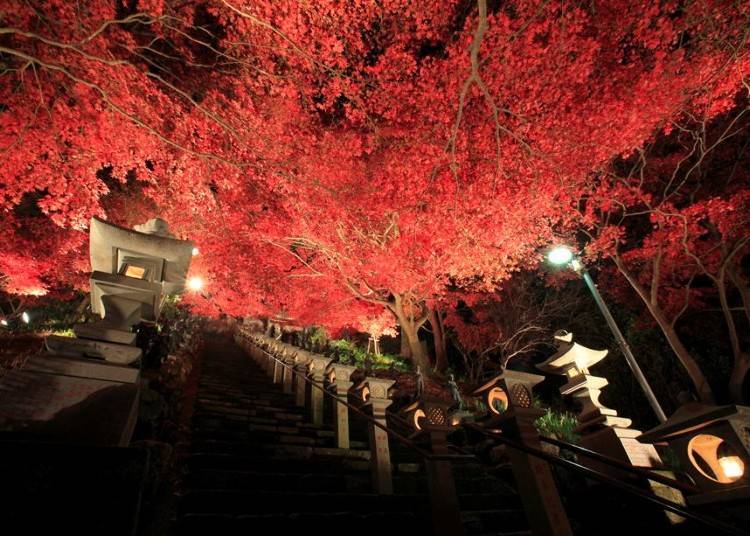 There is also an “Autumn Leaf Festival” held annually during November, whereby the entire garden is faintly illuminated at night in a spellbinding extravaganza. 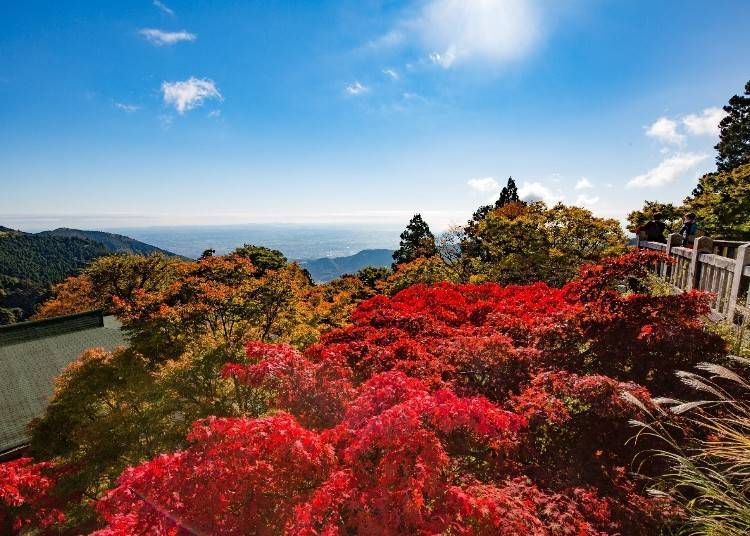 When visiting Oyama-dera, take the time also to check out the Oyama Afuri Shrine, which sits upon the summit of Oyama and boasts stunning panoramas overlooking autumn scenery.

3. Nagatoro Iwadatami: The Idyllic Bliss of a Valley in Autumn 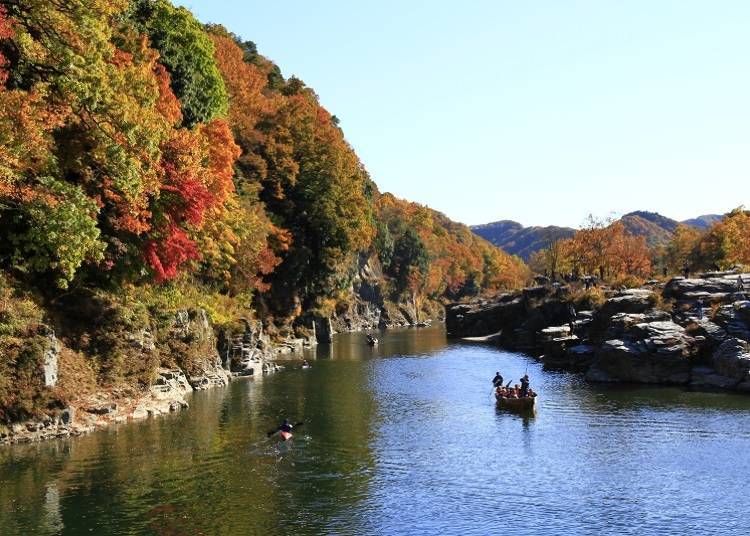 The Nagatoro Valley, located in the Chichibu region of Saitama, is a natural paradise encouraging visitors to heal amongst the bliss of the wilderness.

The most famous sight is the Nagatoro Iwadatami, which boasts dozens of fascinating rock formations designated as both a National Site of Scenic Beauty and Natural Monument.

Access
You can get to the Nagatoro Valley by taking a train on the Seibu Ikebukuro Line from Ikebukuro Station to Seibu-Chichibu Station and then walking 5 mins to Ohanabatake Station on the Chichibu Railway. After boarding a train on the Chichibu Railway, you’ll arrive at Nagatoro Station in 20 mins, with the Nagatoro Valley just a short 5 min stroll away.

Between early to late November, the beauty of Nagatoro Iwadatami, which stretches for 500m, is intensified by a display of vivid autumn foliage weaving together a completely different atmosphere than usual.

There are also several nearby sights to explore, such as Hodosan Shrine, which was said to have been established by the legendary Japanese prince Yamato Takeru, along with Tsukinoishi Momiji Park, which is an equally renowned autumn sightseeing spot often lit up after dark.

Of course, if you’ve come all the way to Nagatoro, you’ve got to join a boat ride down the currents of the Arakawa River, which runs through the Nagatoro Valley and allows an entirely new perspective on the surrounding rocks and autumn opulence. 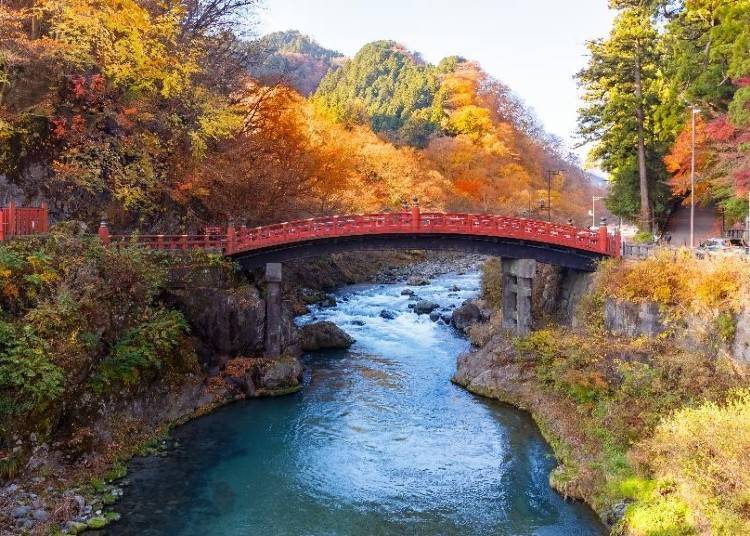 Nikko, Tochigi’s most celebrated tourist destination, is known for its diverse attractions, including the UNESCO World Heritage Site of the Shrines and Temples of Nikko.

Another of Nikko’s most recognizable icons is the Shinkyo Bridge, which acts as a gateway to the town’s assortment of temples and shrines. The wooden bridge is painted in a brilliant vermillion color, radiating a divine, spiritual aura.

The wilderness surrounding the bridge starts to change color between late October to late November, creating a picturesque blend of red and yellow complementing the vermillion bridge and stark blue of the Daiya River. This magnificent view has earned it a place as one of Nikko’s top autumn sightseeing destinations.

Of course, there’s plenty more autumn magic to enjoy after crossing the bridge and diving into the numerous temples and shrines of Nikko. If you have time, it’s also worth checking out the obscure yet no less noteworthy Nikko autumn hotspots, including the winding roads of Irohazaka and the charming Ryuzu Falls!

Access
The closest station to Tosho-gu is Tobu-Nikko Station, which can be accessed via a limited express train on the Tobu-Nikko Line from Asakusa Station in just under 2 hours.

5. Mt. Takao: Fall Splendor From the Window of a Cable Car 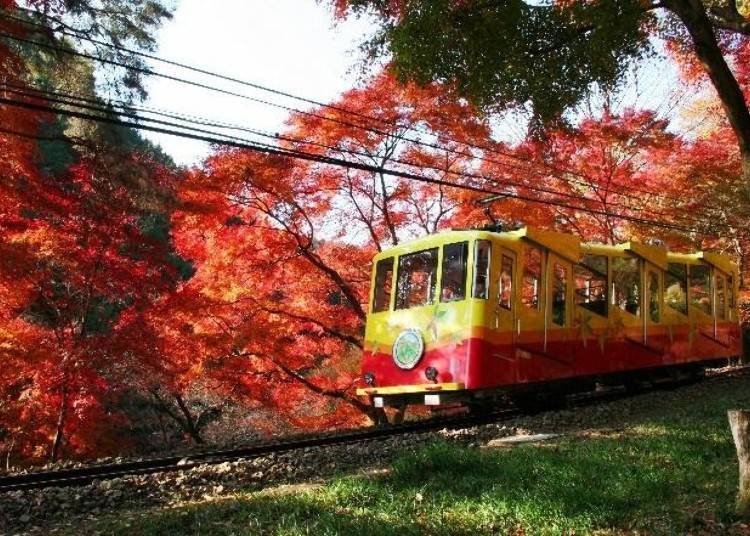 Located in Hachioji in Tokyo, Mt. Takao's highly accessible location and comfortable 599m altitude has attracted climbers for generations, making it a place amongst the most climbed mountains globally!

Mt. Takao is also fitted with a cable car allowing convenient access up the mountainside, taking 6 mins from Kiyotaki Station at the foot to the 472m Takaosan Station.

Access
Taking a Keio Line train from Shinjuku Station to the closest station of Takaosanguchi only takes 50 mins with zero transfers! 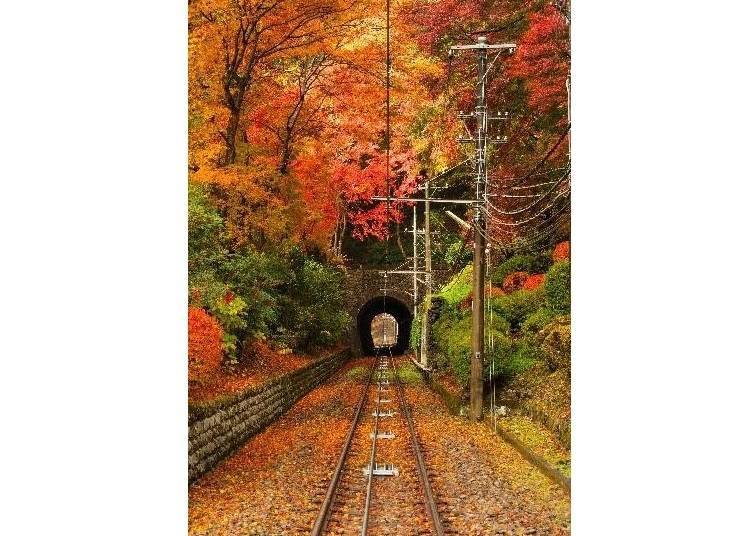 Along with the pleasant ride, cable car passengers will also be treated to jaw-dropping panoramas of the lush Mt. Takao nature from the windows. Between mid-November and early December, these views will be dominated by tunnels of foliage dyed vivid shades of red and yellow.

While you’ll be able to spot clusters of Japanese maple and more from inside the cable car, there is an even greater variety of trees spread throughout the mountain, including horned maple, painted maple, and numerous beech trees. Each has its own distinctive leaf shape and color, invigorating your hike with exciting hues and unforgettable splendor. 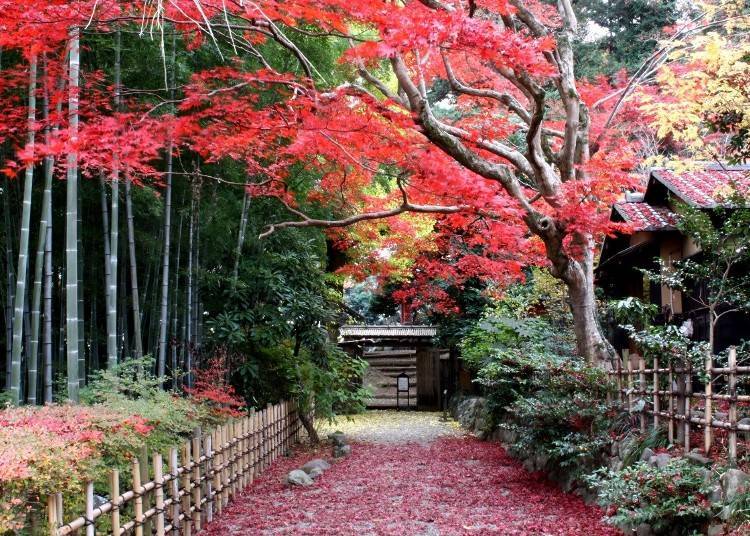 Mogusaen, located in Hino, Tokyo, is a traditional Japanese garden painstakingly maintained since the Edo period. Renowned throughout all of Japan, stepping into its tranquil boundaries feels as if time itself has completely stopped.

Access
Mogusaen can be accessed from Shinjuku Station after taking a limited express or semi-express train on the Keio Line until Fuchu Station and changing to a local train and disembarking at Mogusaen Station. The park is a further 10 min walk from the station.

One of the biggest draws of Mogusaen is the multitude of seasonal flowers blooming at different times of the year, including plum trees, wisteria, hydrangea, and more.

Complementing this is a plethora of fall foliage peaking between early to late November, utterly transforming every corner of the park. Within the 26,000m² premises are ginkgo, maple, doudan tsutsuji shrubs, and more flaunting brilliant hues of red and yellow. 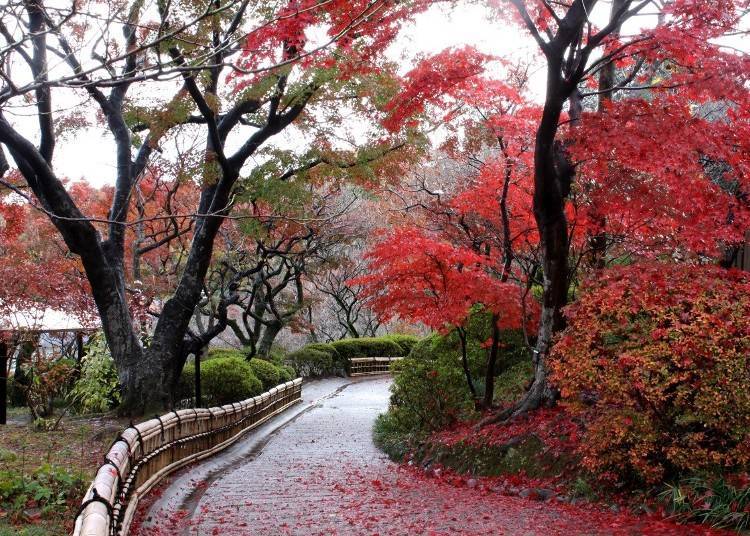 Once the leaves begin to fall between late November and early December, a luscious carpet of red will be born, further enhancing the autumn magic. Walking this fresh, ethereal path surrounded by ancient, unchanged Japanese scenery will leave you feeling both refreshed and utterly content! 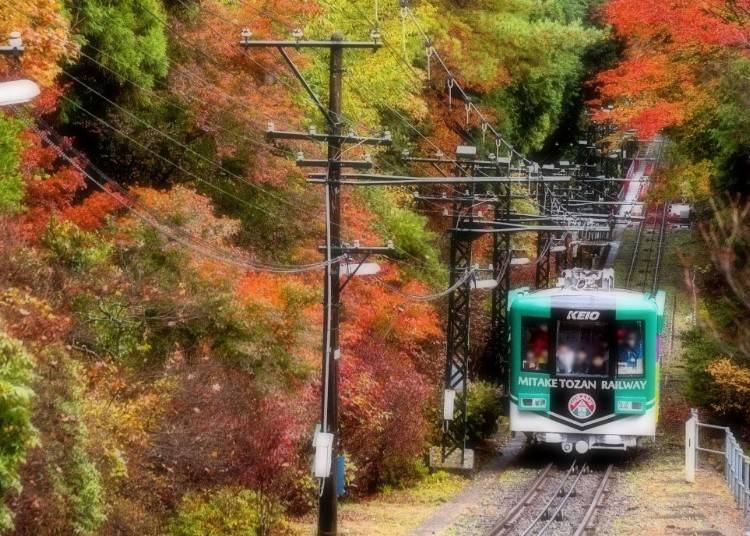 Mt. Mitake is a 929m mountain located in Ome in the Okutama area west of Tokyo. Revered as a “sacred mountain” since ancient times, it leaves a profoundly spiritual impression on all those who visit.

The walk from the 407m Takimoto Station to Musashi Mitake Shrine on the 929m Mt. Mitake summit will generally take over 90 mins. However, if you use the cable car, you’ll be transported in just 6 mins to the 831m Mitakesan Station, from which the summit is just an extra 30 min climb. 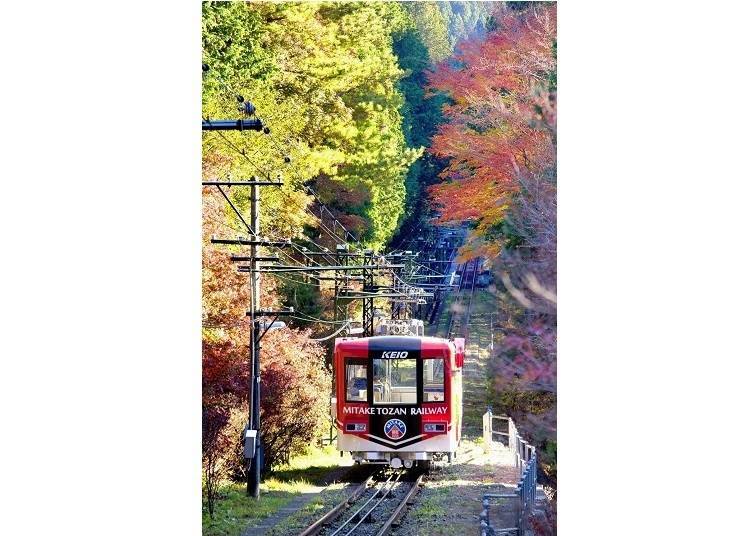 Between early and mid-November, you’ll be able to witness delightful autumn colors along the cable car line. Seeing the cable car forge its way through the mass of burning foliage is an impressive sight often sought out by avid photographers.

Musashi Mitake Shrine, which sits upon the summit of Mt. Mitake, is likewise encompassed by a thick tapestry of fall foliage, encouraging an appreciation of both nature and history. 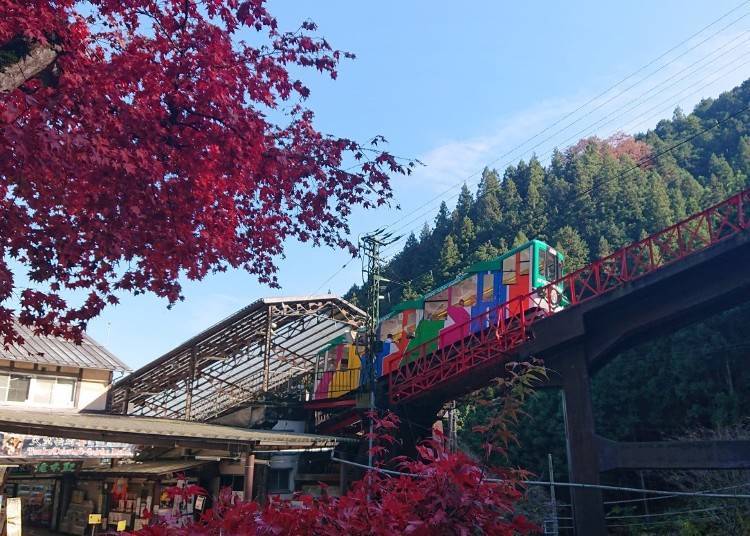 There is also a hiking course allowing adventurers to fully absorb the sights at their own leisure alongside a natural garden of large boulders. Being a relatively gentle course, it’s often frequented by families and casual hikers looking to exercise amongst grandiose valley scenery.

You haven’t experienced the full breadth of Japanese beauty until you’ve seen its temples, mountains, cities, parks, and more, adorned by the radiating glow of fiery fall foliage!

While many assume that the best of this phenomenon is found out in remote areas, there are actually loads of famous autumn sightseeing spots easily accessible from Tokyo via train and bus. Use this list to add some fall charm to your next autumn Tokyo adventure!

*The information presented in this article is accurate as of November 2021. Visit official websites for the latest details.

Autumn in Japan: When & Where To Enjoy The Fall Foliage Season (+Forecast, Nearby Hotels)
*This information is from the time of this article's publication.
*Prices and options mentioned are subject to change.
*Unless stated otherwise, all prices include tax.