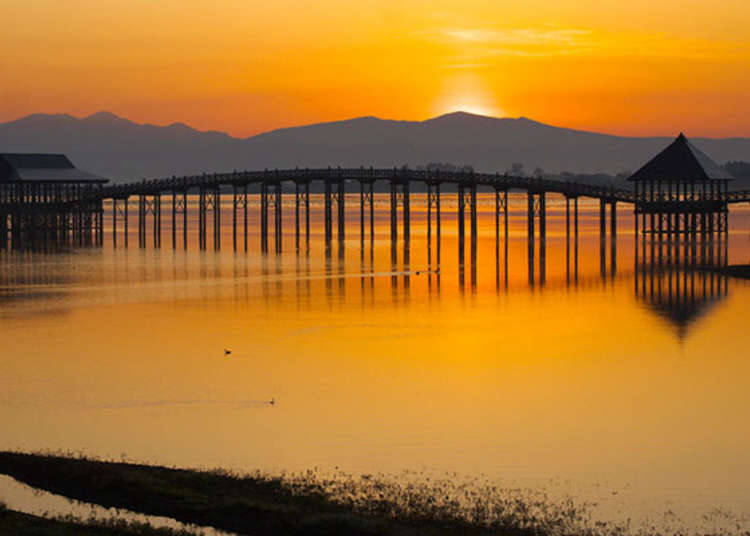 Tsuru-No-Mai Bridge is a top-rated attraction in Aomori Prefecture that gained fame through advertisements made by JR East.

With such picturesque scenery, Tsuru-No-Mai Bridge is now a hot favorite among Japanese and foreign visitors, photographers, and sightseers alike. This time, we’ll be giving you a rundown of how to make the most of your trip to this traditional Japanese bridge! 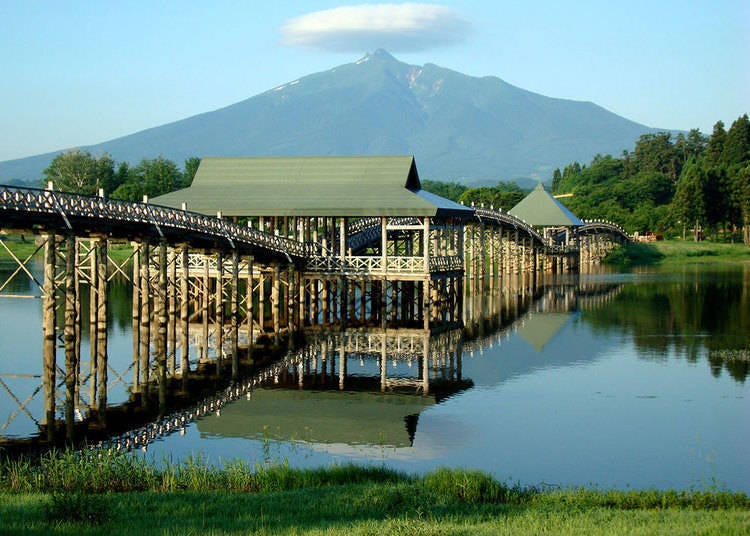 Tsuru-No-Mai Bridge is in the western region of Aomori Prefecture, in Tsurata-machi, a small town of around 13,000 people.

To get there, you can take the JR Gonō Line from Shin-Aomori Station, and the journey takes about one hour to Mutsu-Tsuruda Station. 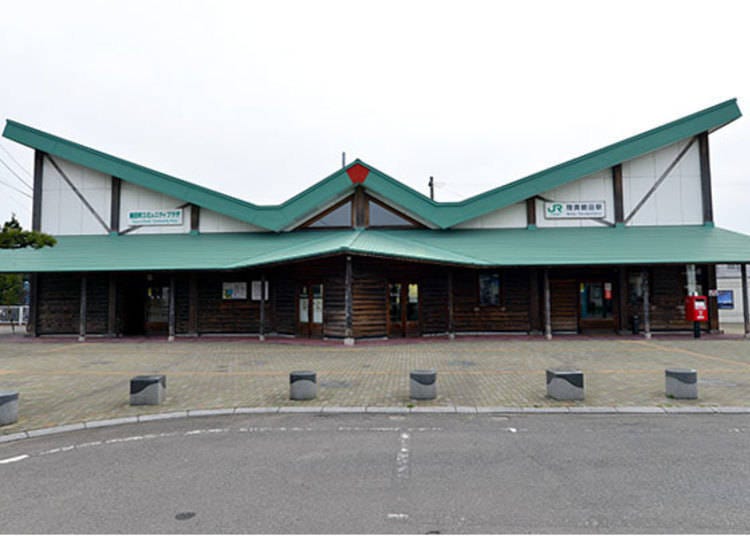 ▲The crane motif on the roof of Mutsu-Tsuruda station really leaves an impression.

Sandwiched between the major cities of Hirosaki and Goshogawara is Tsuruta-machi, deigned in the 1980s as the go-to town for watching tsuru - Japanese cranes.

The city doesn’t hold back on the crane motif either; when you alight at Mutsu-Tsuruda Station, the melody of the train pulling in is the call of a crane, and the ceiling and walls are decorated with cranes as well. 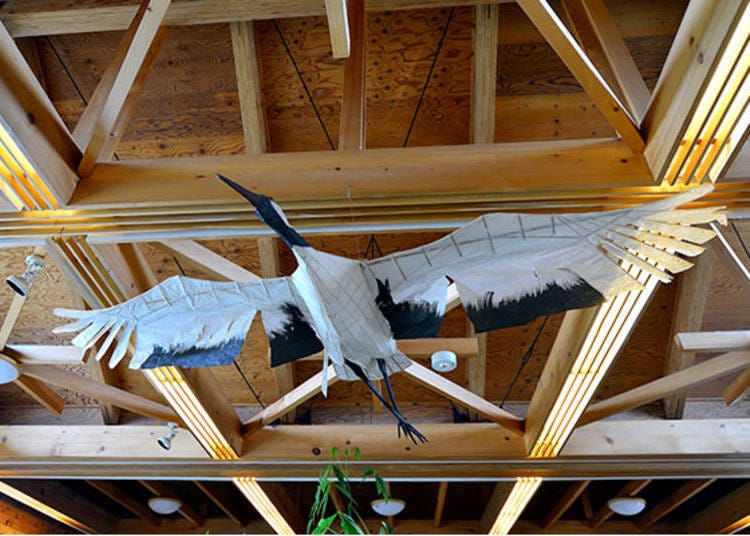 ▲A Japanese crane-shaped kite adorning the ceiling of the station.

From Mutsu-Tsuruda Station, it’s about six kilometers to Tsuru-No-Mai Bridge. After that, it’s recommended to go by taxi. Though it normally costs 2,000 yen one way, there’s a limited-time discount that cuts the trip to just 1,000 yen (see the Tsuruta-machi website for more details).

Recently, many people walk to the bridge for sightseeing and exercise, and others who cycle over as well.

Within Tsuruta-machi, everything from the crane-themed objects and sprawling fields, to the beautiful retro-style architecture, make for some very atmospheric scenery indeed.

Since you’ve already made the trip over, be sure to make your way to Tsuru-No-Mai Bridge while enjoying the landscapes all around you! 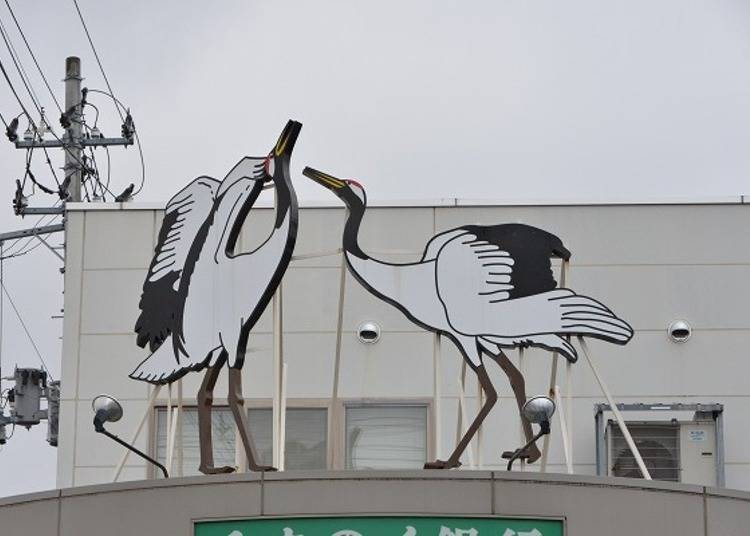 ▲Crane-shaped objects on the roof of building. 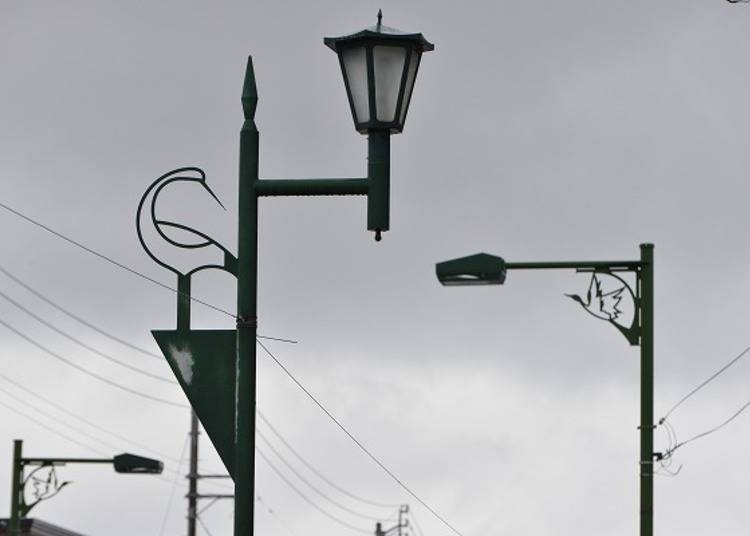 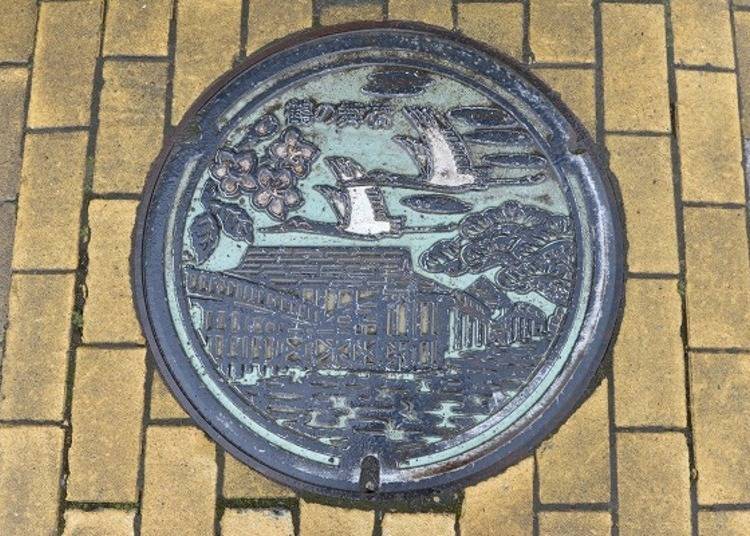 ▲The manhole covers in the area have Japanese crane patterns too! 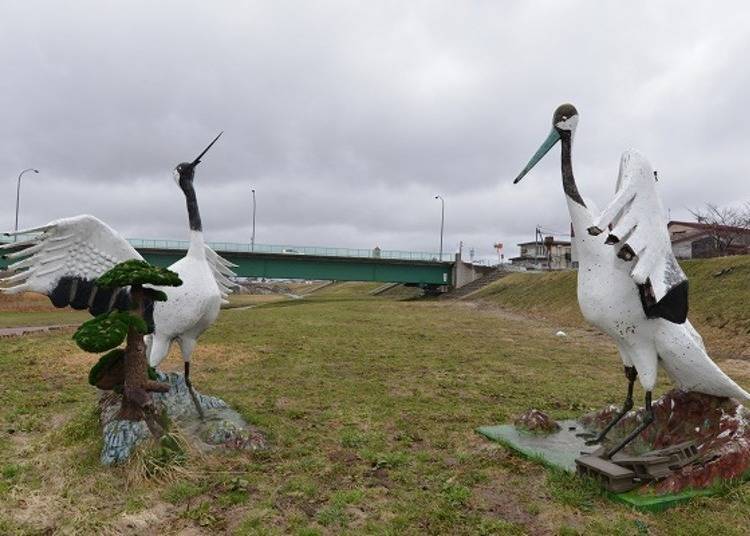 ▲The river bank has crane statues on display too.

The scenery changes dramatically with the seasons and weather

When construction finished in 1994, cranes started coming to the bridge in flocks, resulting in the name “Tsuru-No-Mai Bridge,” which means “dance of the cranes” in Japanese. 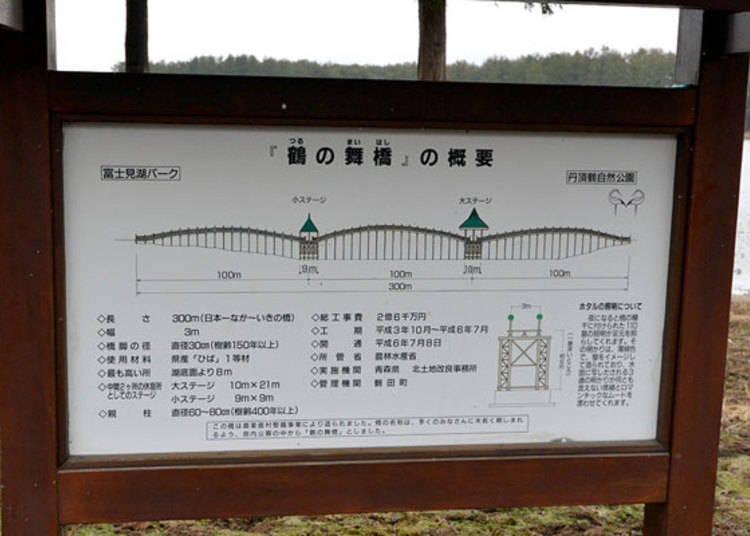 ▲An information board with an introduction of Tsuru-No-Mai Bridge.

Tsuru-No-Mai Bridge is approximately 300 meters long. Made of cypress wood from Aomori, it is the longest triple-arched wooden bridge in Japan, as of May 2018. The bridge design draws reference from Yamaguchi Prefecture’s Kintai bridge.

Each of the three arches is approximately 100 meters long, with the two stages in the middle having taken three years to construct. The arches are eight meters tall at the highest point, about the same height as a three-story building. 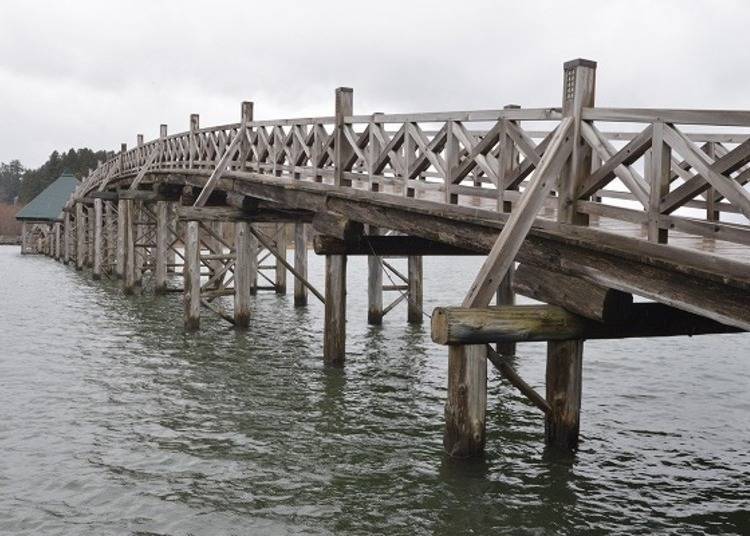 ▲Aomori Cypress was used in the bridge’s construction. Each pillar uses wood from trees that are 150 years old. 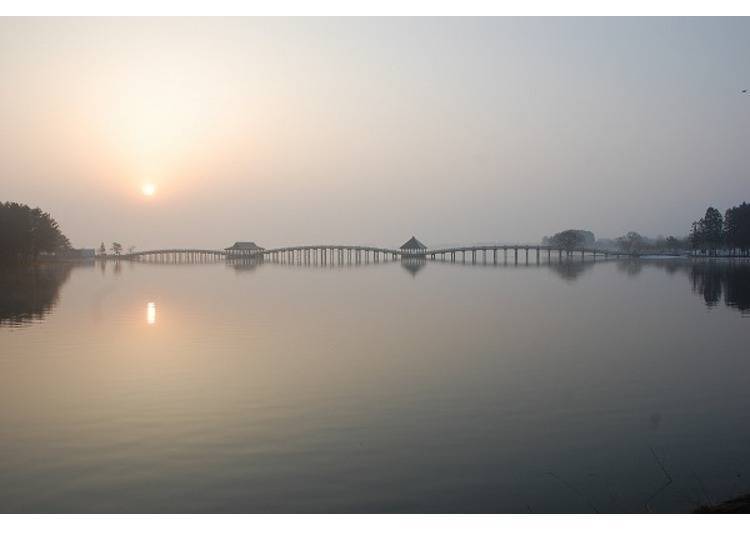 ▲Tsuru-No-Mai Bridge with the morning sun behind it. The bridge’s design is based on the image of a crane in flight. 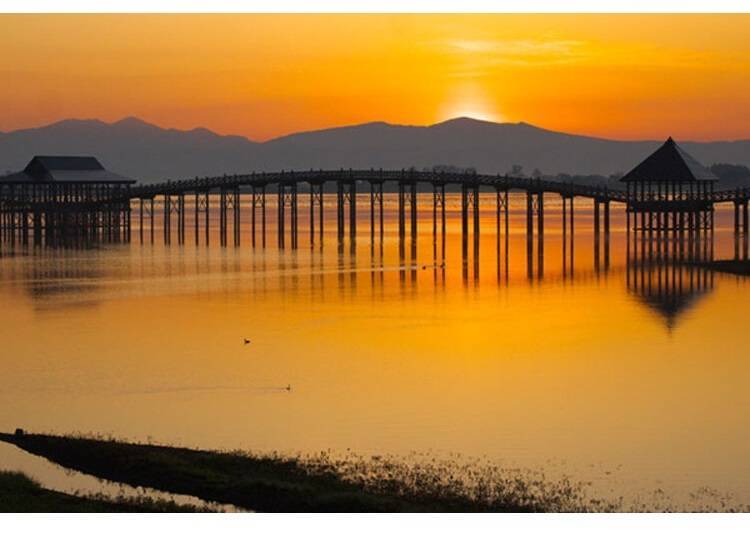 ▲Tsuru-No-Mai Bridge and the morning sun. The Hakkōda mountains are in the backdrop.

Depending on the season and weather conditions, you can take almost otherworldly photos of Tsuru-No-Mai Bridge. The harmony of nature with the bridge makes for a fairytale-like scene, adding to the area's charm. 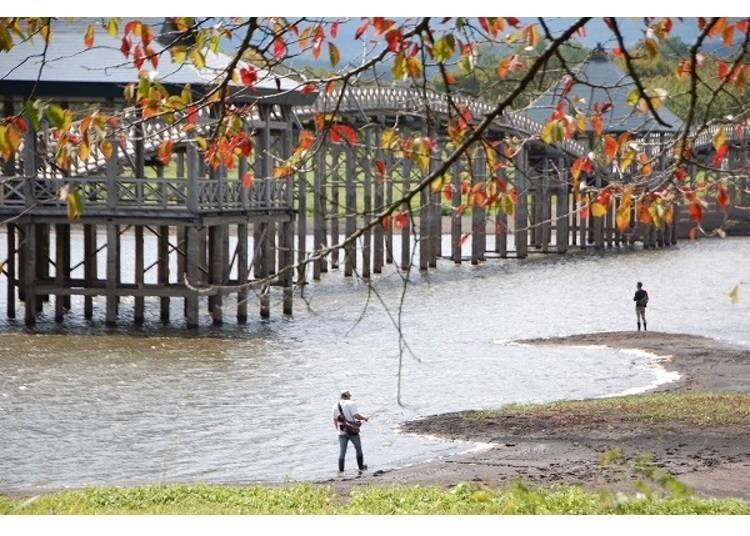 ▲In autumn, you can enjoy the bridge with views of fall colors too. 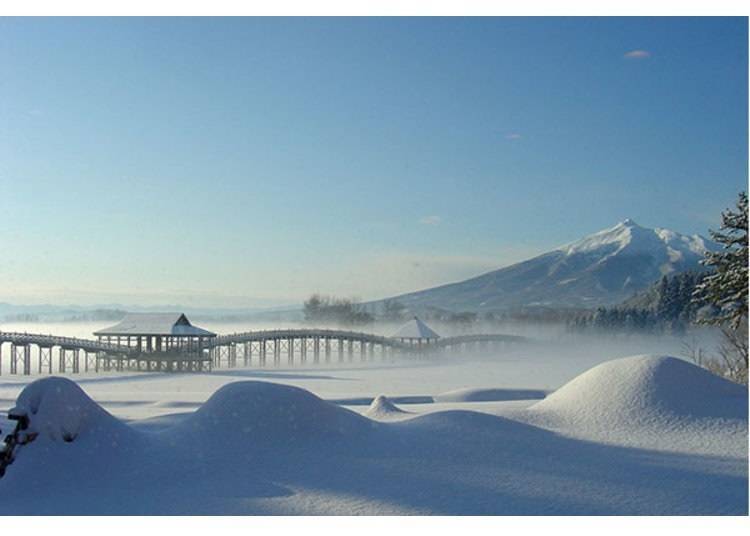 Takenami Masaaki, whose photo of Tsuru-No-Mai Bridge is used on JR’s poster, guided us around the bridge this time. He spent one week waiting for the moment to catch the perfect shot, with Iwaki-san mountain reflected clearly on the river. 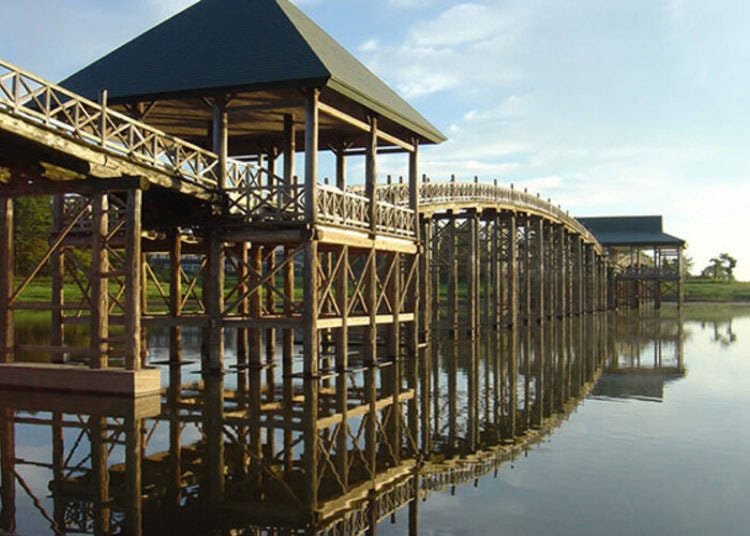 ▲In a perfectly timed shot with no wind, the lake surface can reflect crystal clear images of Iwaki-san mountain!

Whether you’ll get the perfect shot is not just up to luck, it takes a lot of patience and time to wait for that one fleeting moment to happen. So within the limits of your own time and schedule, enjoy your time taking photos that move your heart!

Top 3 spots for that perfect picture

While Tsuru-No-Mai Bridge was being constructed, Fujimiko Park, also in the vicinity, was renovated. At 12.4 hectares in size, the park has a playground and accommodations, and stores (only open in summer).

You can observe red-crowned cranes up close in the park as well. Of course, within the park are also photo spots. 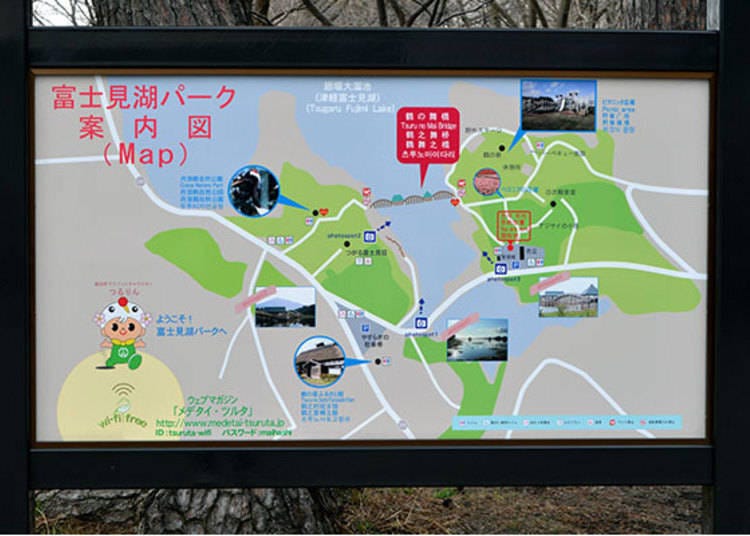 ▲An information board at the carpark near the stores. Information about photo spots and the surrounding area are indicated.

There are three recommended photo spots. The first is the point near the Iris Path, which is the closest to Tsuru-No-Mai Bridge. With its beautiful peak like Mount Fuji, Mount Iwaki is often called “Tsugaru-Fuji” because of this, and you can see it in the background, framing Tsuru-No-Mai Bridge in the foreground.

The image used on the JR poster of the bridge was taken close by. This spot is also recommended if you’re taking photos on your smartphone, without a zoom lens. 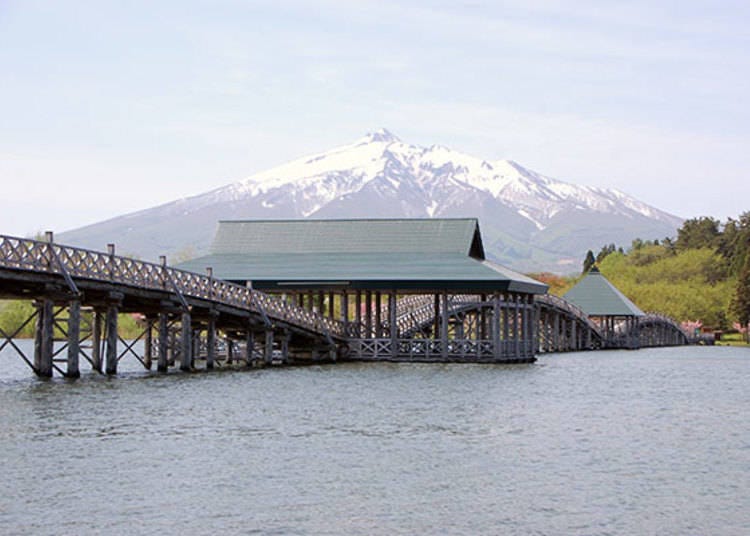 ▲Near the Iris Path, you can take photos of Tsuru-No-Mai Bridge with Iwaki-san mountain in the background. 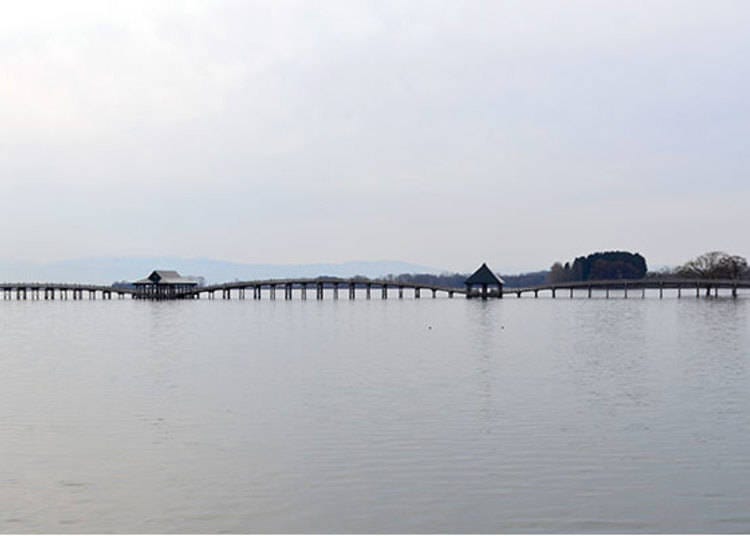 ▲According to the original architect, there were legends of dragons in the lake too, and the shape can also be said to be that of an eastern dragon’s back.

The third spot is the view of Tsuru-No-Mai Bridge from the parking lot near the stores, in the northwestern corner of the park.

You can see Mount Bonju in the backdrop of Tsuru-No-Mai Bridge, a mountain in-between Goshogawara City and Aomori City.

As Tsuru-No-Mai Bridge is in the center of the Tsugaru Heiya region, the view of the bridge can change drastically depending on where you’re looking from. 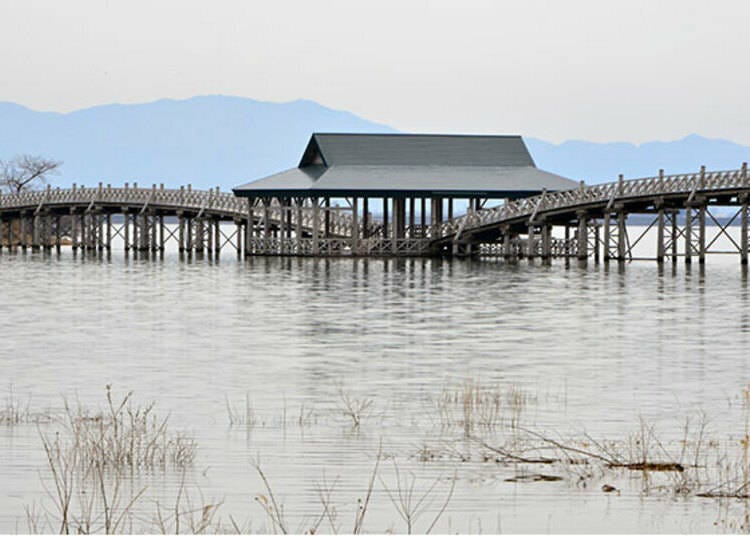 ▲Tsuru-No-Mai Bridge from the carpark near the shops. In the background is Bonju-san mountain.

One draw of Fujimiko Park is the multiple views of Tsuru-No-Mai Bridge from within the park. Besides the designated spots listed, you can look around the park for your own perfect photo spot as well.

Mother Tree: A new place to get up-close and personal with Japanese cranes 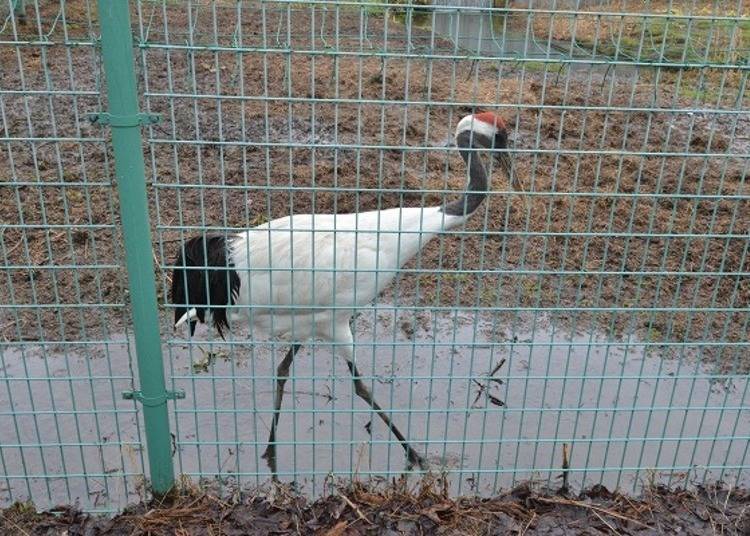 ▲An affectionate Japanese crane walking along the fencing.

Comparing the similarities and differences between the crane-themed objects in Tsuruta-machi to the real cranes makes for an enjoyable pastime. 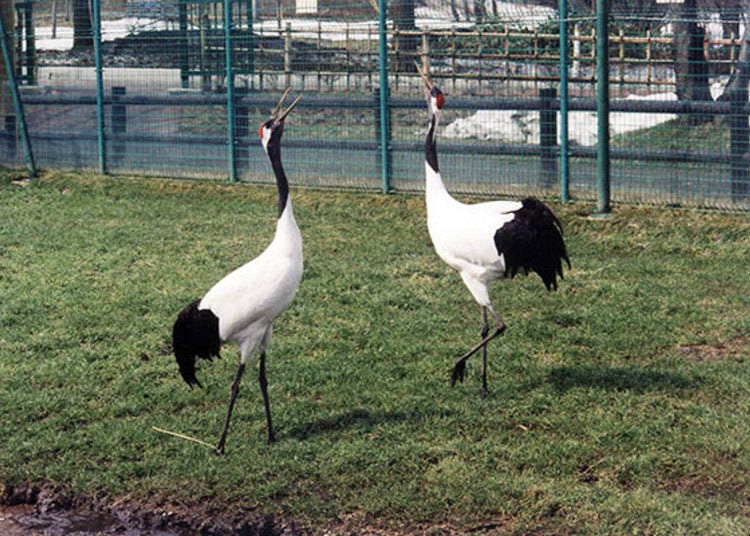 Finally, we will also be introducing a new spot in the area, Tsuruta Mother Tree. While Fujimiko Park was being renovated, the trees in the area were cleared, but at the request of the children living there, this single tree was left alone. This is the tree that grew from the bed of Fujimiko Lake. 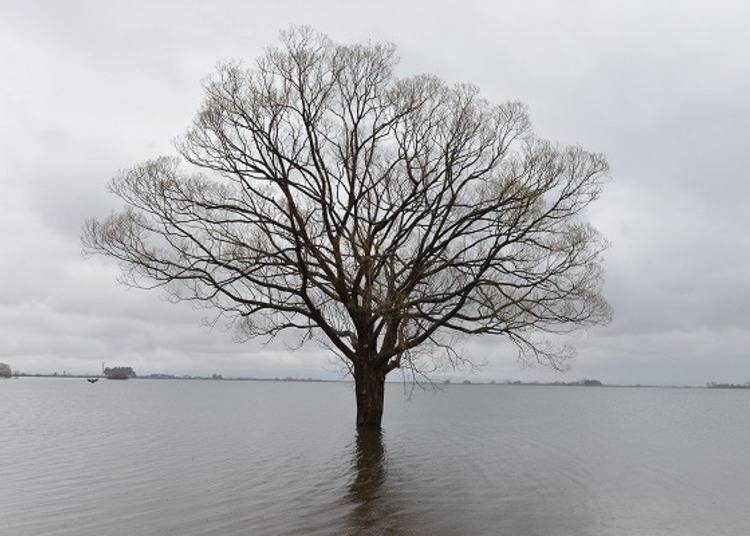 ▲Tsuruta-machi Mother Tree, sprouting out from below the lake, has a magical atmosphere.

As Fujimiko Lake is used for irrigation, the water level changes with the seasons and weather. As such, when the lake is full, the stages of Tsuru-No-Mai Bridge will be just full of water. At this point, you can see this single tree growing from the river, like a sight from a secret world. 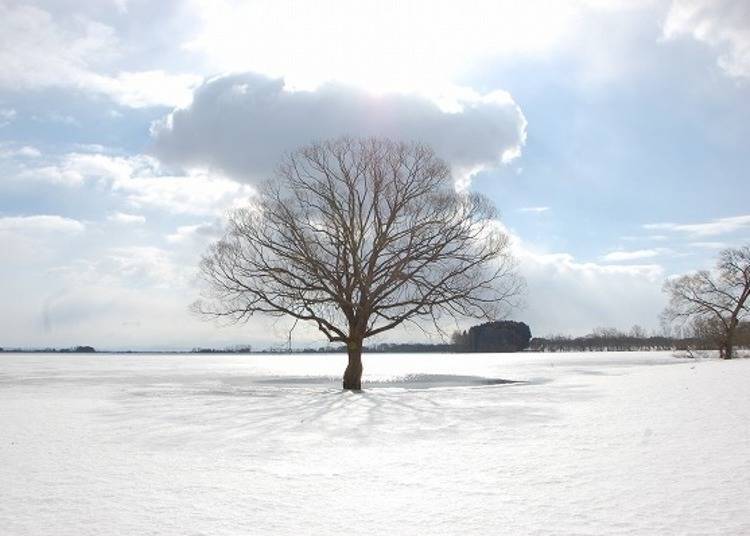 ▲A photo taken during winter, when the lake is frozen

After enjoying the splendid views of Tsuru-No-Mai Bridge, why not bring back some souvenirs from the town as a memory of the tour trip? First, we’ll introduce to you “Tsuru-no-wasuremono,” a specialty of “Angelic Tsuruta Shop,” a famous confectioner with three shops in the prefecture. 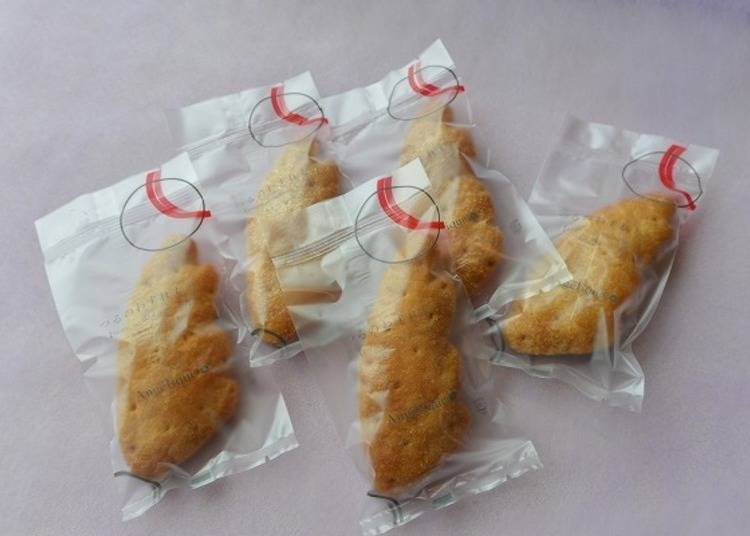 ▲“Tsuru-no-wasuremono”, with is elegant packaging. (150 yen each, without tax)

A pie-style cookie in the shape of a crane’s wing, the crunch of the pie complements the elegant sweetness of this snack. “Tsuru-no-wasuremono,” which means “what the crane had forgotten,” is sold only in the Tsuruta shop, so be sure not to miss it! We recommend you to try other sweets available at the shop too. 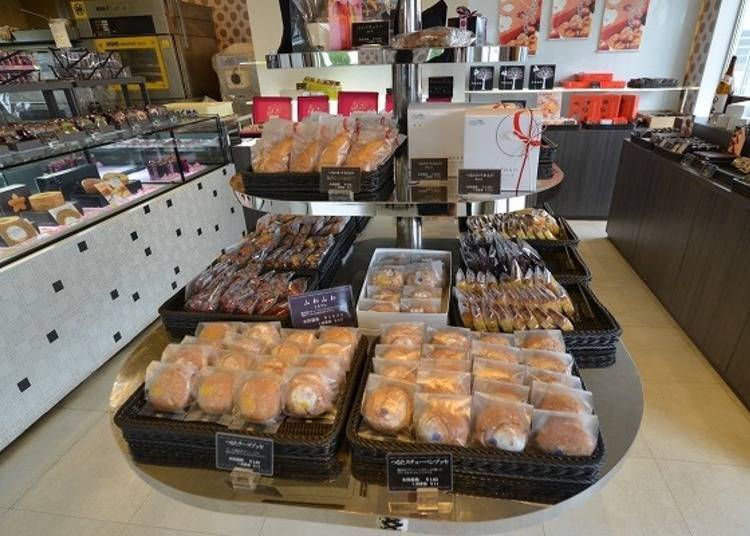 ▲Other sweets, besides “Tsuru-no-wasuremono”, lining the shop’s display.

Next, we’ll be introducing a delicacy that makes use of Steuben grapes, renowned for their hardiness and ease of cultivation in cold climates.

Tsuruta-machi is the only place in Japan that produces Steuben grapes, according to a 2009 census by the Ministry of Agriculture, Forestry, and Fisheries. As the town is located on the same latitude as New York, it has a similar climate that makes it suitable for cultivating Steuben grapes, and from the latter half of the 1960s, they started being cultivated as crops here.

In October 2017, the first winery in Tsuruta-machi, WANO Winery, opened its doors. The winery produces wine and sweets using Steuben grapes. You can view the production areas and dine in as well. 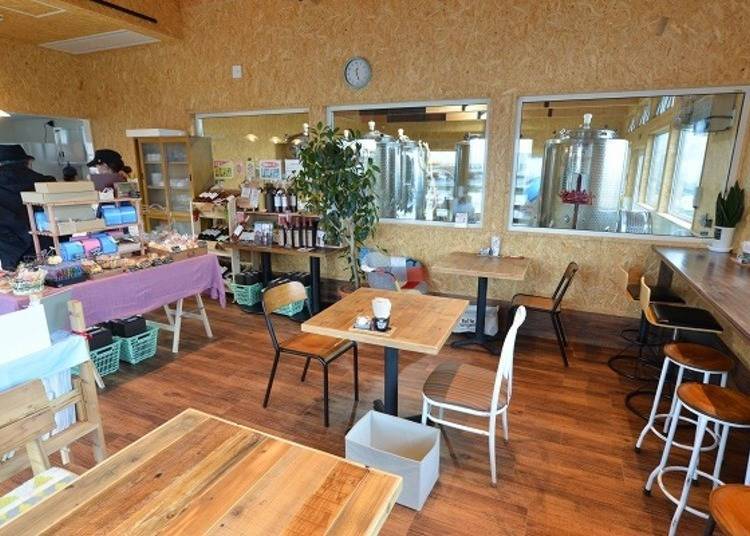 ▲You can view the production line while eating in at WANO Winery. 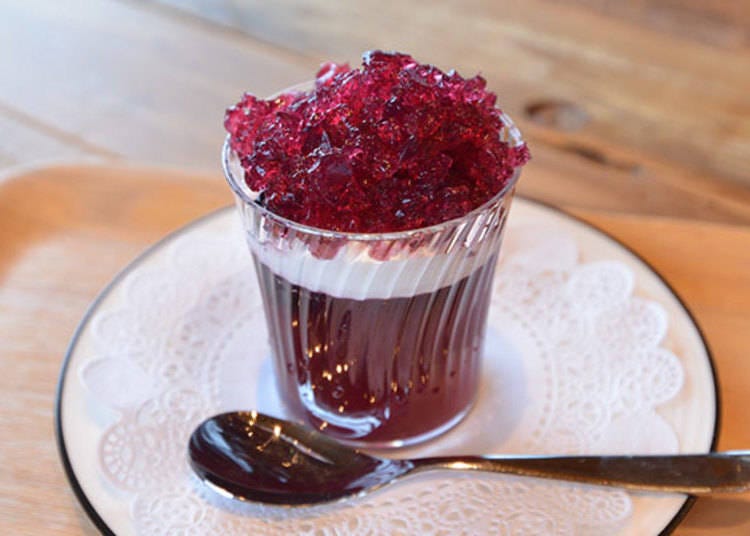 Besides the places we’ve recommended, you can drop by “Michi-no-Eki Tsuruta: Tsuru-no-Sato Aruja,” a market for souvenirs from Aomori Prefecture, with a main focus on Tsuruta-machi.

One popular local food that you can’t get anywhere else is the “Bikkuri bun”, a bun so large that one person will be hard-pressed to finish it all on their own. The newly built tourist information center and local souvenir shops are in the vicinity, and you’ll be sure to make some new discoveries here too. 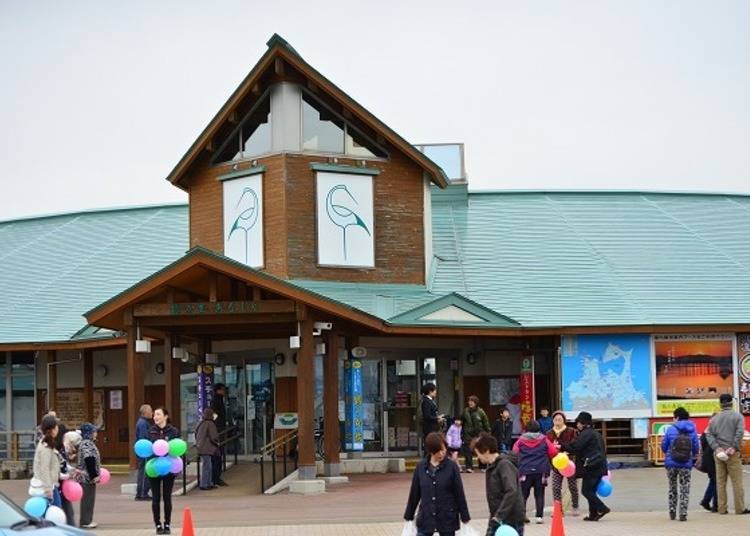 ▲Michi-no-Eki Aruja, which of course crane marks on the outside as well.
Michi-no-Eki Tsuruta: Tsuru-no-Sato Aruja

So why not take a trip down to Tsuru-no-Mai Bridge and Tsuruta-machi? You can see splendid views at Tsuru-no-Mai Bridge all year round. Do be sure to see the beauty of the place with your very own eyes, a sight that will never cease to amaze you no matter how many times you go.

*This article was originally published in April 2020. Details may have changed since this time.

We Use 'JR East Welcome Rail Pass' And Visit Aomori's Secret Sightseeing Spots!
*This information is from the time of this article's publication.
*Prices and options mentioned are subject to change.
*Unless stated otherwise, all prices include tax.