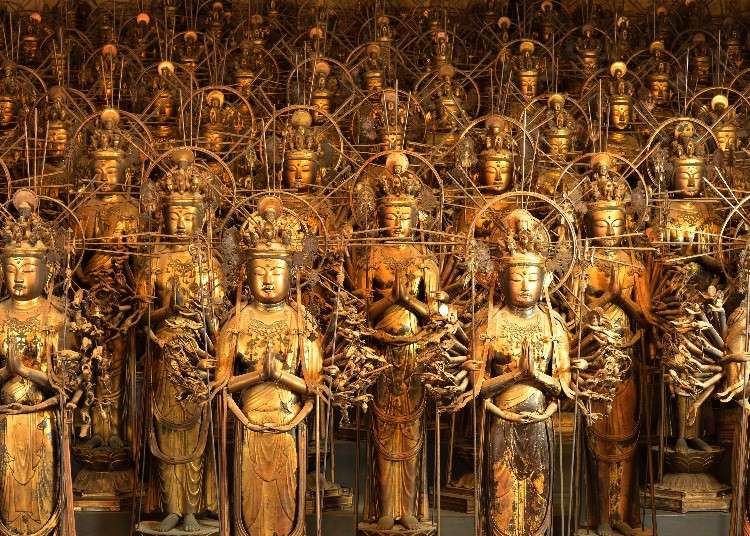 The temple is full of highlights, housing many national treasures such as the Main Hall and seated and standing statues of Thousand-Armed Kannon. It is also easy to get to, just a 10-minute bus ride from Kyoto Station or a mere 15 minutes on foot. 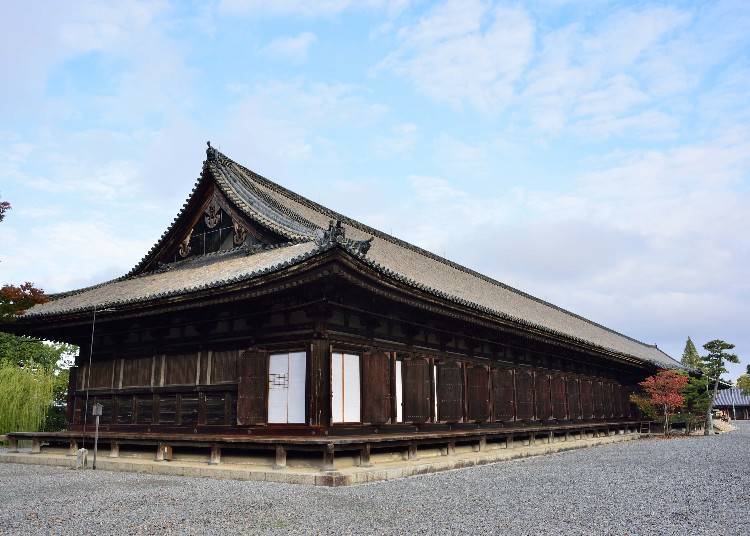 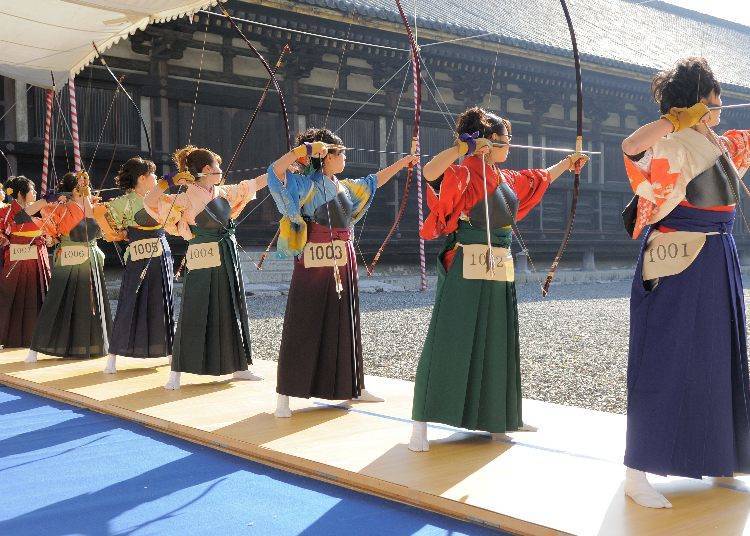 The long hall, the longest in Japan at 120 meters in length, has 33 spaces in-between its pillars, and that is said to be how the hall got its name, "Sanjusan," meaning "33".

The long Main Hall is also famous for long-range archery. Since the Momoyama period (the latter half of the 16th century), archery competitions were being held to see who could accurately shoot the most arrows over 120 meters from the southern tip of the west edge of the hall. Today, on the Sunday closest to January 15, an archery competition is held in honor of the Edo period long-range archery. In particular, seeing newly come-of-age young people dressed in fine clothing as they shoot is spectacular. This archery competition has become an indispensable and representative part of bringing in the New Year in Kyoto. 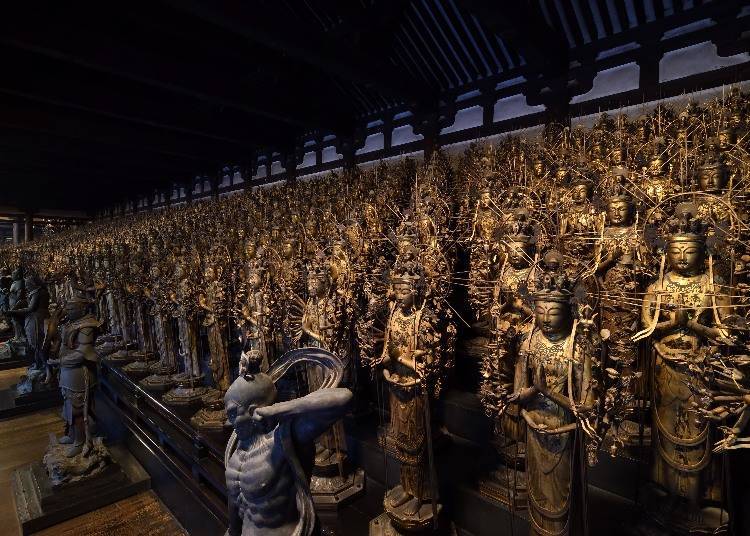 Inside the hall, the temple's principal image, a seated Thousand-Armed Kannon statue (a national treasure), is flanked by 500 standing Kannons on each side, for a total of 1000 enshrined statues (all national treasures).

In front of the standing Kannon statues are Nijuhachibushu (28 Legions, protecting the Kannon deity) and Fujin and Raijin (the gods of wind and thunder) statues as well. Every one of the hall's statues are masterpieces of Kamakura period sculpture and designated national treasures, and the realistic artwork is stunning. This army of Buddhist statues that seem like they could come alive at any moment is a must-see spectacle. 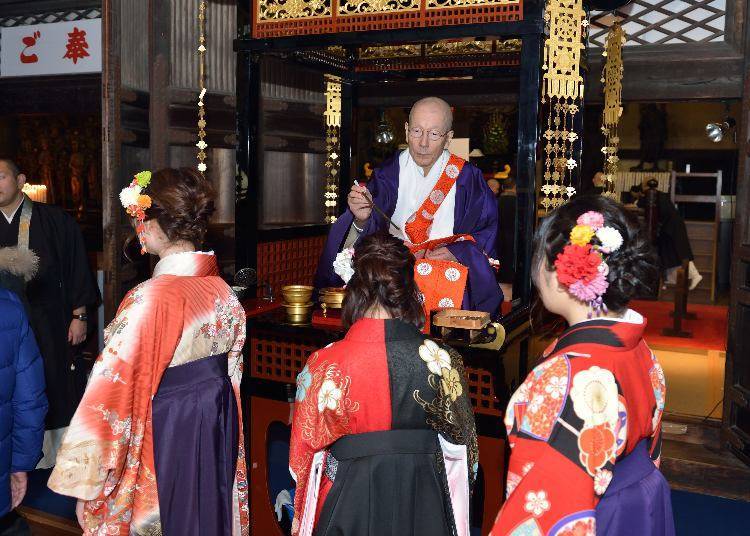 The "Rite of the Willow" ("Yanagi no Okaji"), which takes place on the same day as the archery competition and has its roots in India, is the most important ritual at Sanjusangen-do Temple. During the ritual, a branch of a sacred willow tree is used to sprinkle blessed water onto attendees' heads, which is said to ward off illness and prevent headaches in particular.

The temple is said to have been built in prayer of recovery from the chronic headaches Emperor Go-Shirakawa suffered. The temple is also known by the nickname "Zutsu-zan Heiyu-ji" ("headache mountain temple of recovery"), and there are omamori charms sold to cure and protect against headaches as well.

On the day of the Rite of the Willow, entry to the temple grounds is free, and the statues of the Main Hall can be viewed for free. The temple is exceptionally crowded and lively on that day between all those coming to receive a blessing and those who watch or participate in the archery contest. 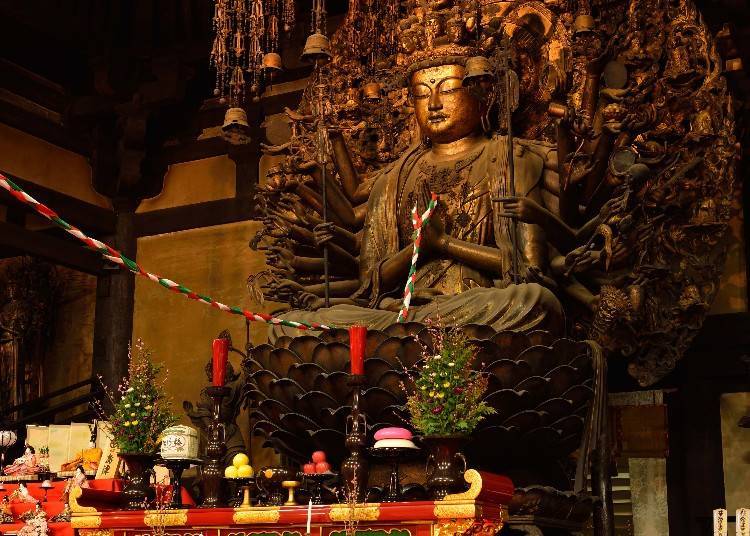 Based on the significance of the number three in Sanjusengen-do Temple's name, on March 3 (3/3), the Shuntoue festival is held. During this festival, also known as "Momonohoue," there are many celebratory events, including floral offerings and exhibitions of the Ikebono school of flower arrangement, howa (religious teachings) and rakugo (comic story) tellings, and more.

On this day only, a special platform is set up on the pathway of the Main Hall to get a bird's eye view of the Thousand-Armed Kannon statues, which brings in many visitors hoping to view the statues from a unique angle and a sweeping view of the entire hall.

In honor of the traditional "Momo no Sekku" ("Peach Festival") on March 3, peach omamori (500 yen) are sold, available only to women and girls. Like the day of the Rite of the Willow, entry to the temple is free on this day, so there is always a lively crowd. 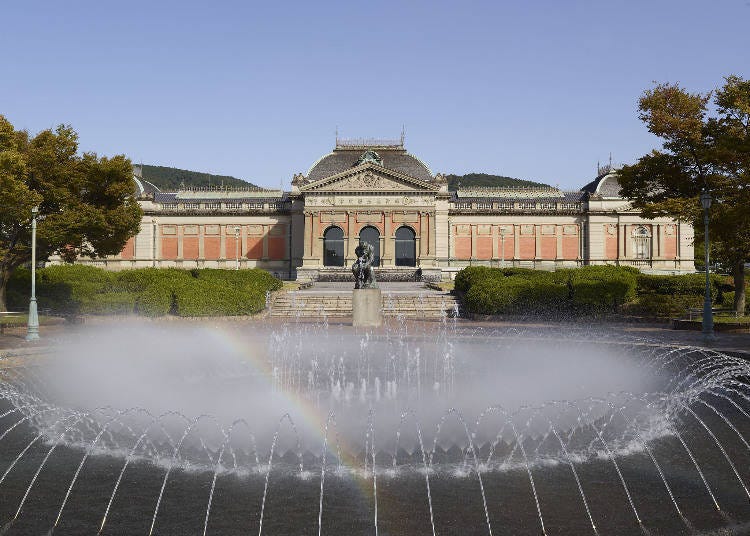 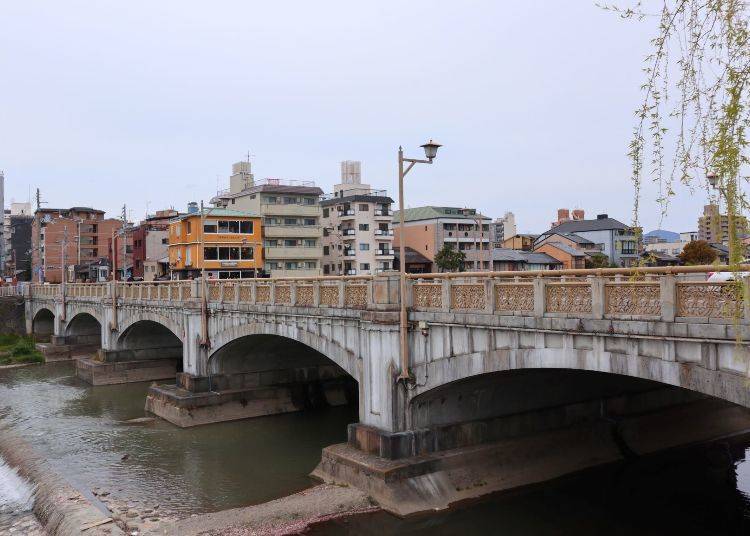 There are also many spots related to the historic figure Toyotomi Hideyoshi, including Toyokuni Shrine, which commemorates Toyotomi, and Hodai-ji Temple, home to the Great Buddha Hall built by him. The Kyoto National Museum across from Sanjusangen-do Temple is also an attraction you won't want to miss.

Aside from exhibits, the museum also features many interesting places to check out, such as the main gate constructed in the Meiji era, Meiji Kotokan Hall, and a large garden. Shichijo-oohashi Bridge crossing the Kamo-gawa River was completed in 1913 and, in 2018, registered as a national tangible cultural property. Try taking a tour around the Higashiyama-Nanajo area to see its many highlights.

Kyoto Guide: 5 Best Popular Sightseeing Spots to Visit Along with Nijo Castle
Kyoto's Most Famous Sightseeing Spot: The Beauty of Kiyomizudera
Kyoto Nijo Castle: Complete Guide to the World Heritage Site Shoguns Lived in
Unravelling World Heritage Site Ginkaku-ji Temple and Its Must-See Spots!
*This information is from the time of this article's publication.
*Prices and options mentioned are subject to change.
*Unless stated otherwise, all prices include tax.