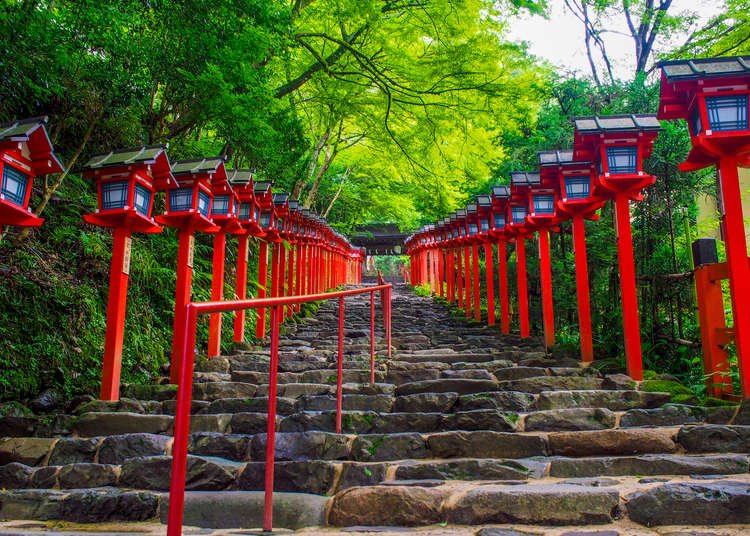 Kifune Shrine sits at the foot of Mount Kurama in Sakyo Ward, about a 40-minute drive from Kyoto’s center.

It is resplendent in each of the four seasons, be it the new green of spring, the colorful leaves of autumn or mantled in snow in winter. One look at this picture-perfect shrine set in nature and you will understand why it draws so many visitors throughout the year. 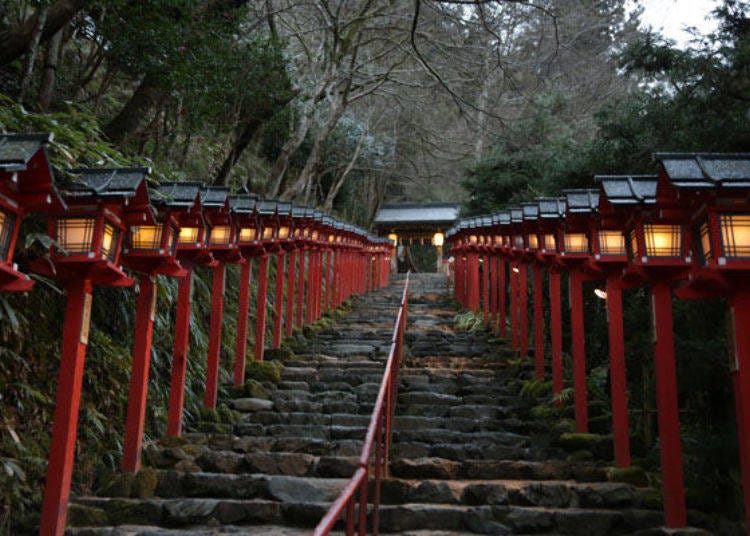 Kasuga lanterns line the stone stairway leading up to the shrine. This otherworldly view representative of the shrine is often shown on TV and in magazines. 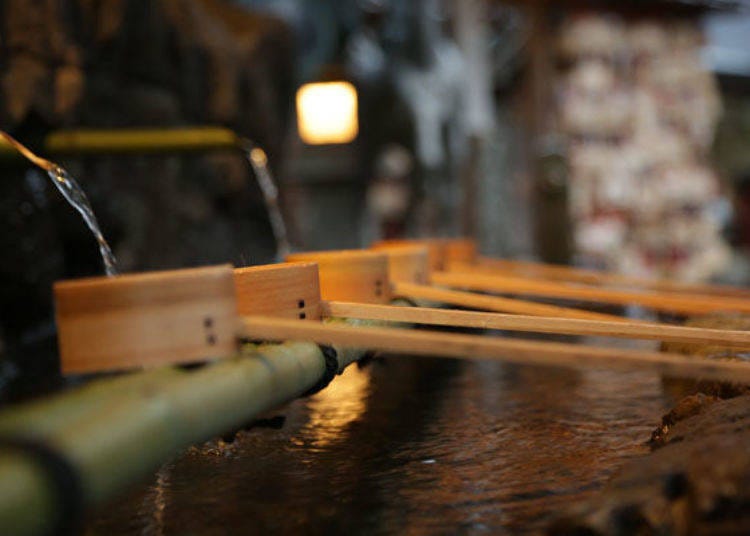 After ascending the approach to the shrine and once inside the precincts one must first purify oneself with water. On this day (January 13, 2017) the temperature was right around freezing—biting cold! This pure water cleanses one’s heart. 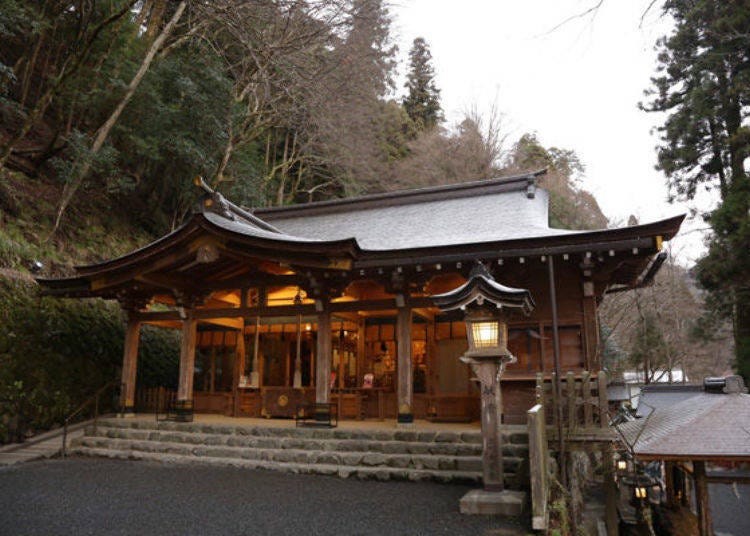 The exact date when Kifune Shrine was established is not known, but it is indeed very old with records showing that reconstructions have been carried out from 1,300 years ago.

The deity enshrined here is the God of Water, called Takaokami no Kami. We know that it has existed since ancient times because it is mentioned in the Kojiki [Records of Ancient Matters] and Nihon Shoki [Chronicles of Japan], two of the oldest records in Japan. 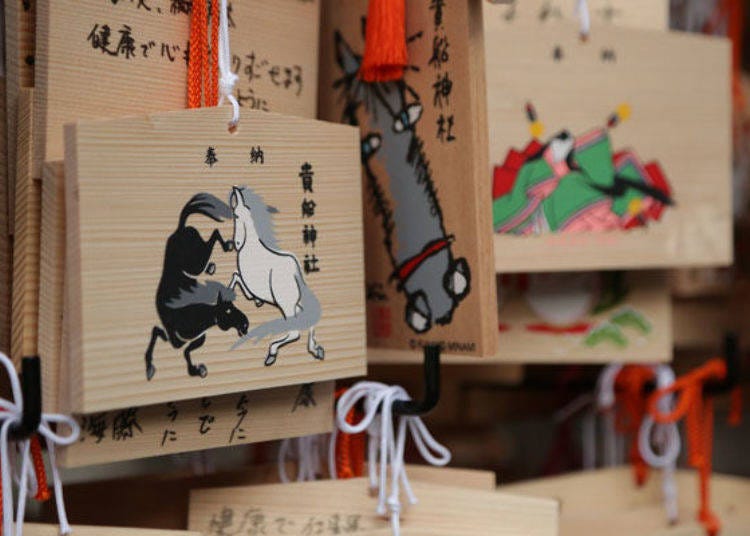 Successive imperial courts also fervently worshiped here and the Emperor Saga is said to have given offerings of living horses when praying for rain or for rain to stop, and this is said to be where the votive cards picturing a horse originated. 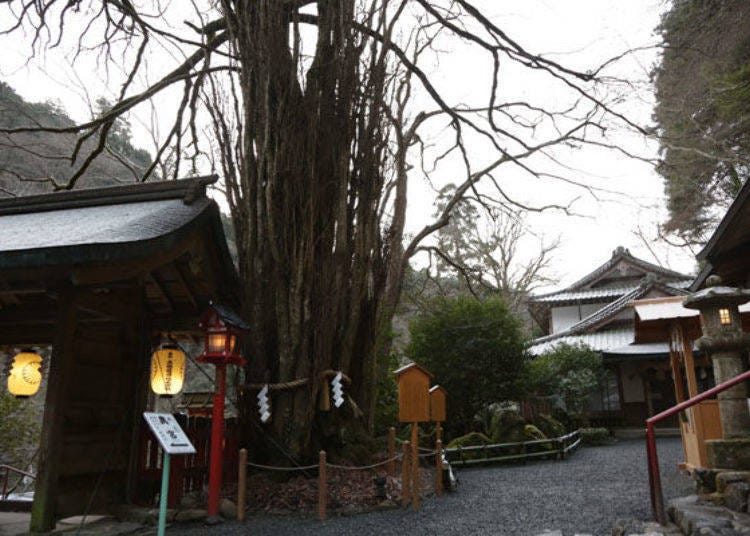 Although there are various theories regarding the origin of the shrine's name, it is said that from olden times it has been written using characters meaning "the source of spiritual energy" and which are also read as "Kifune".

It is a place that is the source of the earth's energy, "Ki", and from ancient times has attracted those who believe the divine virtue of good fortune can be obtained here.

This katsura tree is 400 years old. The energy of the god of the earth is said to rise to the heavens like a dragon and this tree is worshiped as a sacred tree embodying that form. 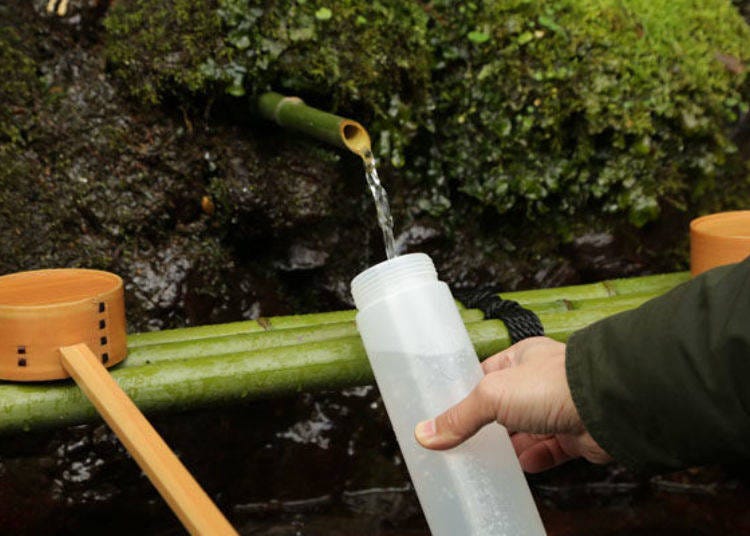 As I mentioned earlier, the deity enshrined here is the god of water, so the pure water flowing here is sacred water and it is possible to take it home with you. You may bring your own container, but if you did not bring one, you can buy one in the precincts for that purpose (300 yen each). 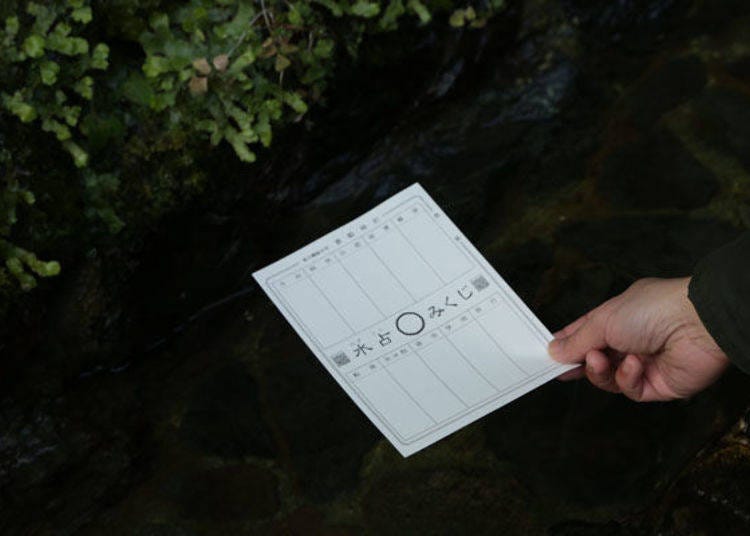 Also, floating the fortune slip on the sacred water will show your fortune. These water fortune-telling slips (200 yen each) are very popular. Be sure to give it a try when you visit. 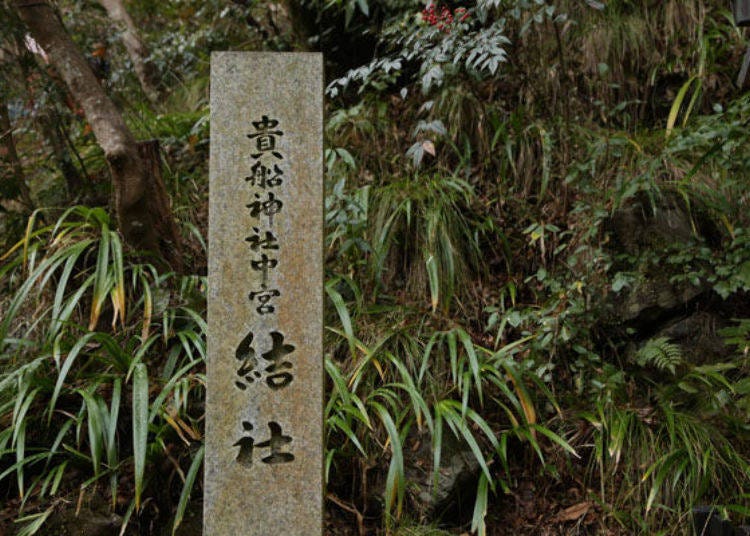 The enshrined deity is Iwanagahime no Mikoto, the god of matchmaking according to folklore. 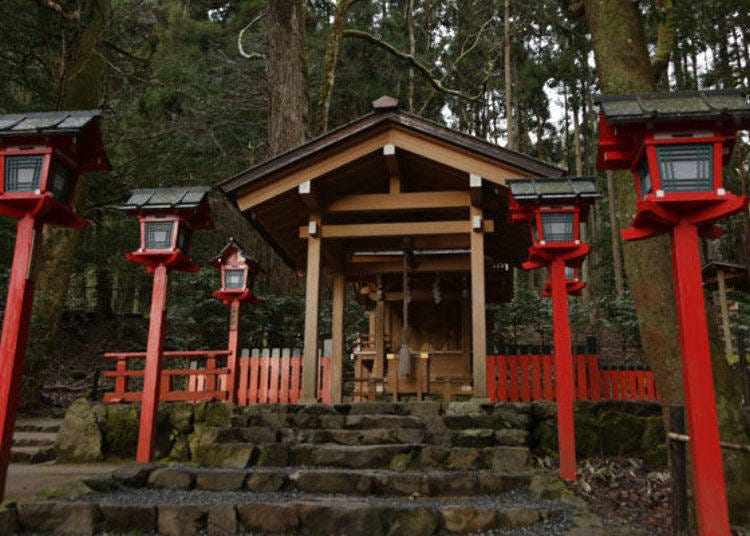 Legend has it that the poet Shikibu Izumi, troubled by her husband's inconstancy, visited the shrine and offered a poem seeking help and miraculously her wish was granted. 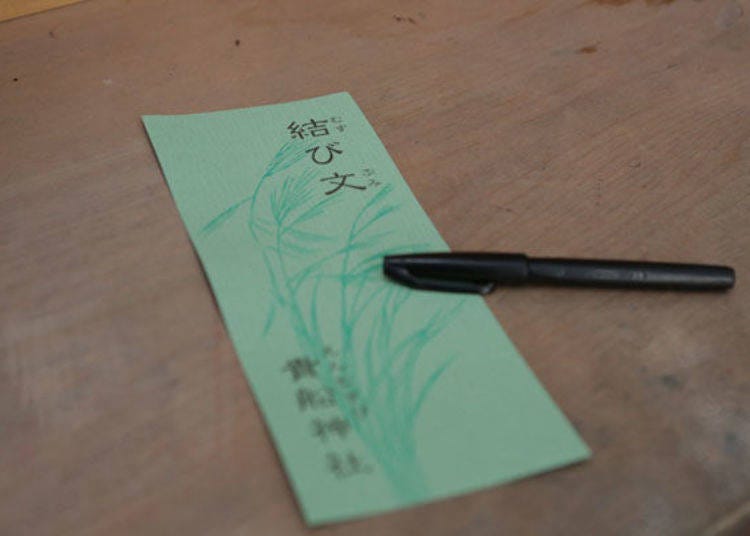 ▲The Musumibumi, a paper for writing a request (200 yen each). Many musumibumi and votive pictures have been tied to places inside the shrine precincts as offerings.

Discover the place where Kifune Shrine was first built 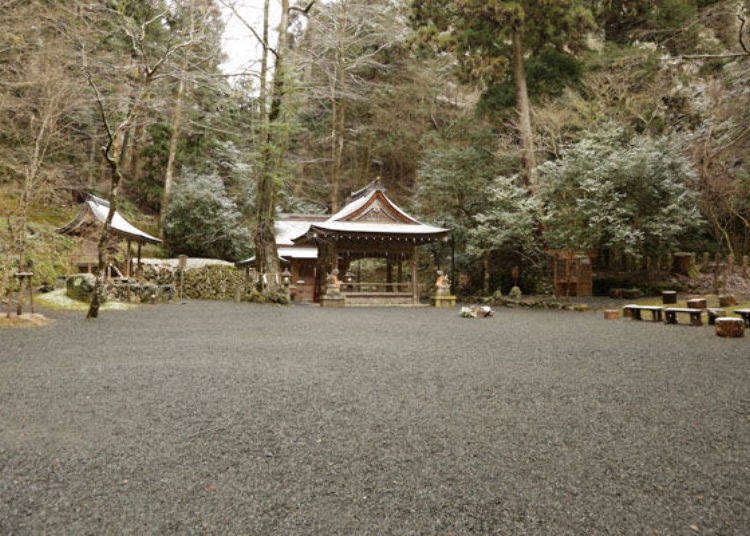 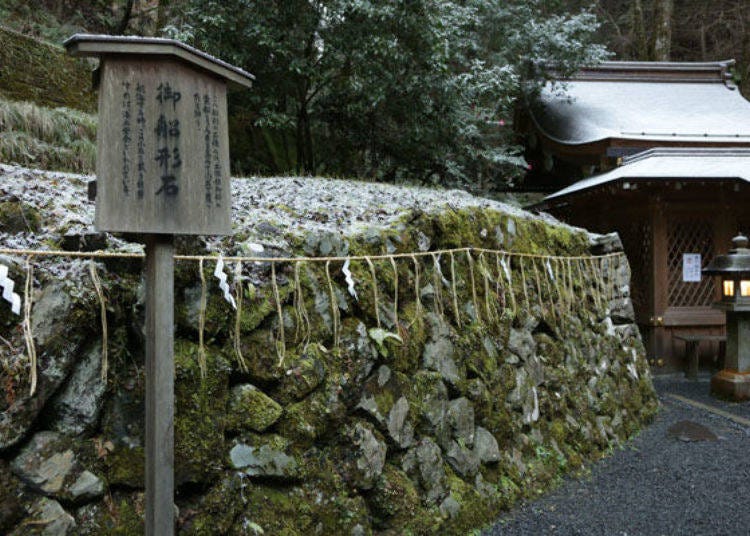 According to the legend of its foundation, the yellow ship (Kifune) on which Tamayorihime no Mikoto, the divine mother of Emperor Jimmu, rode, sailed back up the Yodogawa River and the Kamogawa River arriving at this place and that was the origin of how the shrine came about.

According to the legend, the yellow ship was covered with rocks to hide it from the eyes of men and today it is covered in moss and enshrined near the rear shrine. 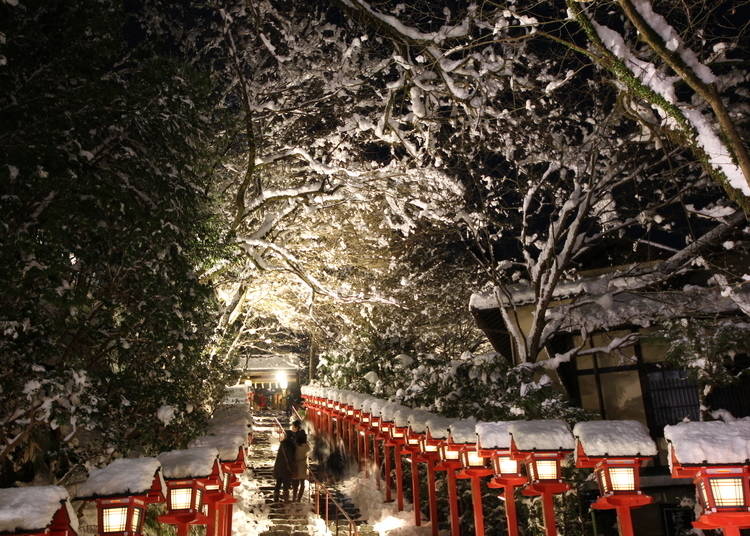 Every year from January 1 to February 29 an illumination event called "Kifune in the Snow" is held at Kifune Shrine highlighting the beautiful winter scenery.

The event is only held on Saturdays when the grounds are covered in snow and the decision whether to hold the event or not is posted on the same day at 3:00 p.m. on the official website as well as on SNS (only the main shrine is illuminated). 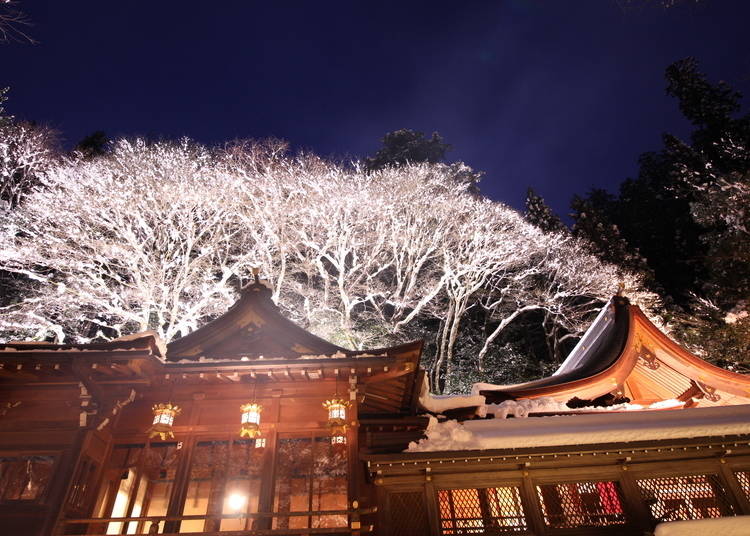 If you are lucky enough to be in Kyoto when it snows, please visit the shrine and enjoy the otherworldly winter scenery for memories that will remain with you long afterwards. 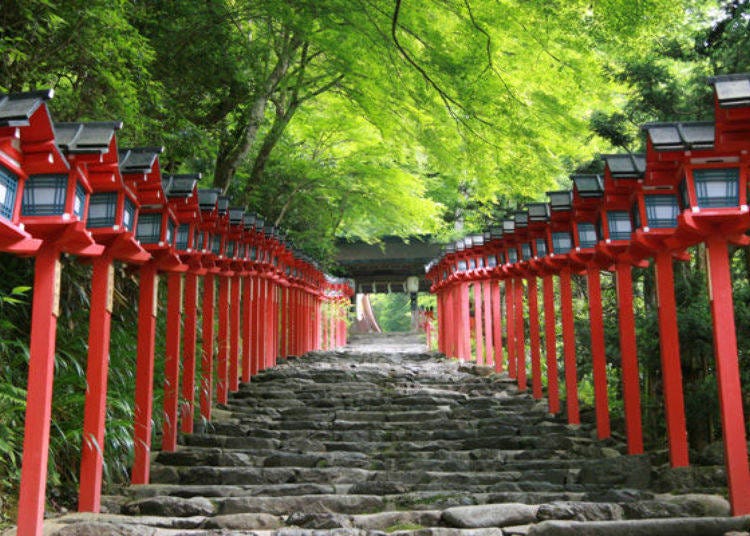 But visiting the shrine during the other seasons is also highly recommended. In the summer, a platform is erected at the Kibune River that flows beside the shrine, and many tourists gather to enjoy the cool air there. This is a time when the shrine is resplendent in bright, green colors. 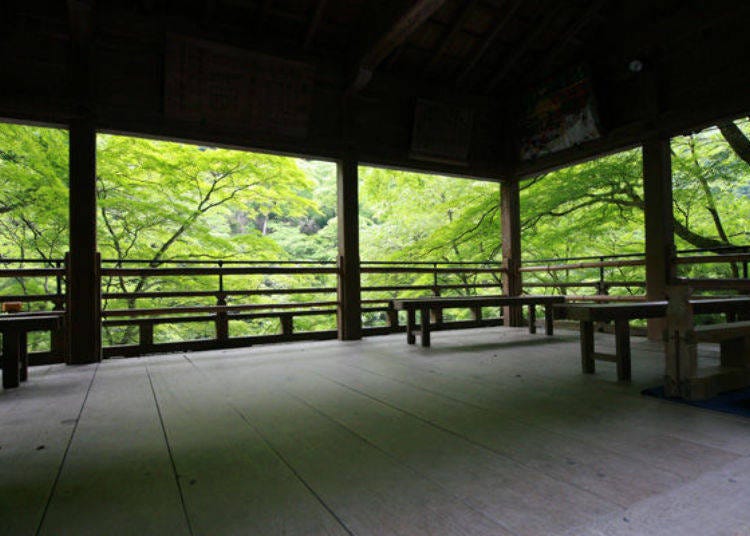 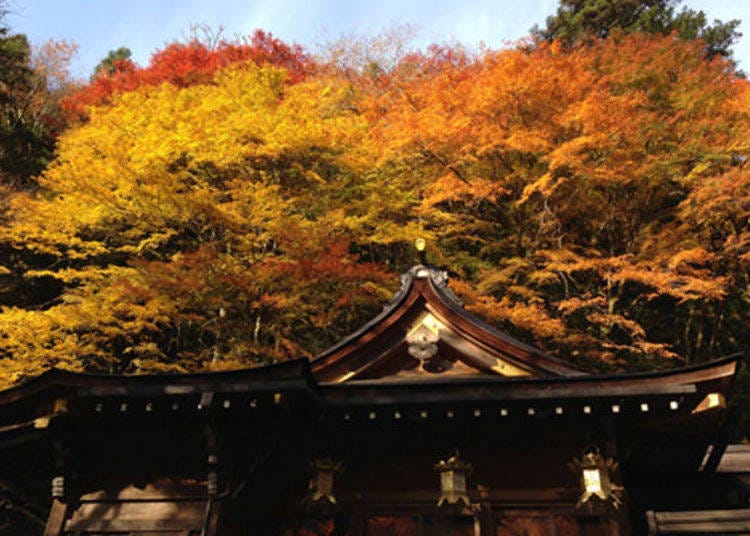 In autumn, the trees in the Kifune Shrine grounds, the surrounding mountains, and along the approach to the shrine lined with shops are all bathed in the bright reds of the autumn colors. 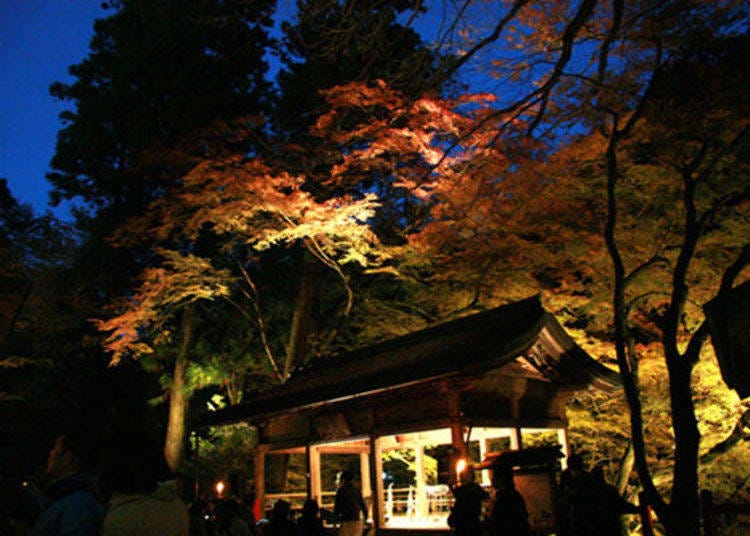 ▲ The beauty of the illumination of the autumn colors along the path leading to the rear shrine as well as each of the shrines is timeless and unforgettable.

Next trip, why not take a short day trip in Kyoto and visit this shrine and enjoy its unique tranquil scenery!

Kyoto in One Day: How to See All The Best Attractions

Cool Down in the Hot Summer! 10 Refreshing Places to Visit in Kyoto in Summer
*This information is from the time of this article's publication.
*Prices and options mentioned are subject to change.
*Unless stated otherwise, all prices include tax.