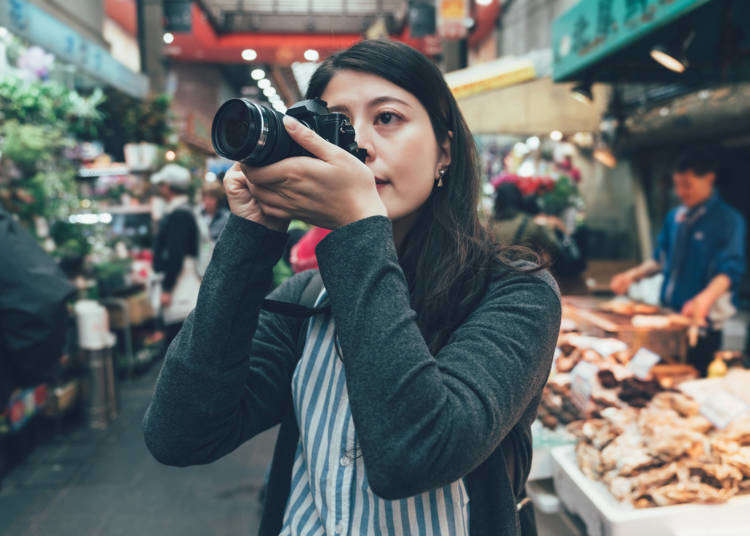 Tourist etiquette in Japan has been a major topic as the number of visitors to the country continues to surge. While there are certain manners that are expected of tourists throughout Japan, some areas have certain etiquette points they would like to see underscored.

Kyoto in particular is a popular tourist destination. It can be fun to sightsee in Kyoto, but there are some things you might not be aware of when touring the area.

Today we will learn about culture and Kyoto tourism manners to help you avoid accidental travel faux-pas and make the most of your trip!

1. “Don’t Chuck That Here!” Etiquette in Japan While Walking the Streets 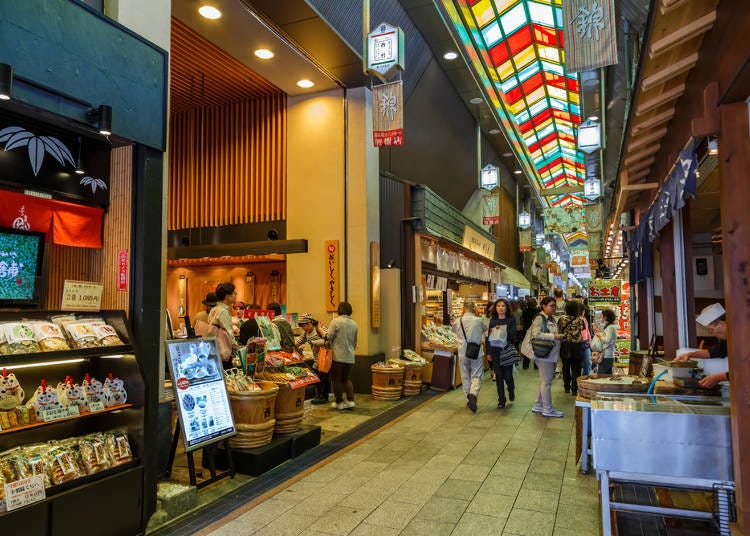 One of the great pleasures of sightseeing is enjoying local Japanese snacks while walking around. But the biggest thing to note here is littering, and where to place your garbage after eating.

There are many places in Japan without trash cans, done as a counter-terrorism measure. And while some sightseeing spots, such as Shimizu and Arashiyama, do have plenty of trash cans positioned around the streets, many do not! A simple point of etiquette in Japan: don't ruin the scenery by tossing your trash just anywhere. It’s a pretty big inconvenience to the people who live there and have to clean up after your mess.

Some shops have in-store trash cans that let you toss your garbage after you’re done eating. Also keep in mind that in many places, eating and walking is prohibited in the first place, and some towns are kept tidy by locals who cannot stand to see litter on their streets.

Please protect the scenery and the environment, and hold on to your trash until you can properly dispose of it in a trash can!

How to prepare
An easy way to prepare for this is to have a small plastic trash bag in which you can collect all your refuse and then throw it out when you have the opportunity. 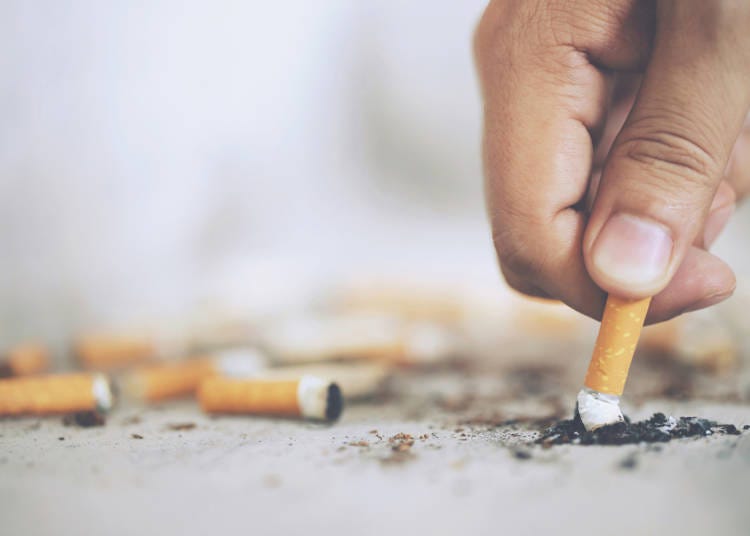 Smoking while walking and tossing cigarette butts on the ground are not only a violation of etiquette in Japan, but may also result in you being fined.

In Kyoto City, the Kyoto City Ordinance prohibits smoking on the streets and outside of designated areas, and is strictly enforced in all public areas.

Specifically, high-traffic areas, such as the city center, the Shimizu/Gion Area, and the Kyoto Station Area, are designated "fine collection zones." If you are caught tossing a cigarette butt on the street by the authorities, you will be charged a fine of 1,000 yen.

In Kyoto, there are two designated smoking areas in the city center, nine in the Kyoto Station area, and three in the Gion and Shimizu areas.

How to prepare
Portable ashtrays are sold at convenience stores and 100 yen shops. Buying and using one will make your life much more comfortable.

Kyoto’s No-Smoking Law: Avoid the Penalty for Smoking on the Streets With This Guide

2. “No Photos!” Etiquette in Japan for Sightseeing Spots and Tourist Facilities 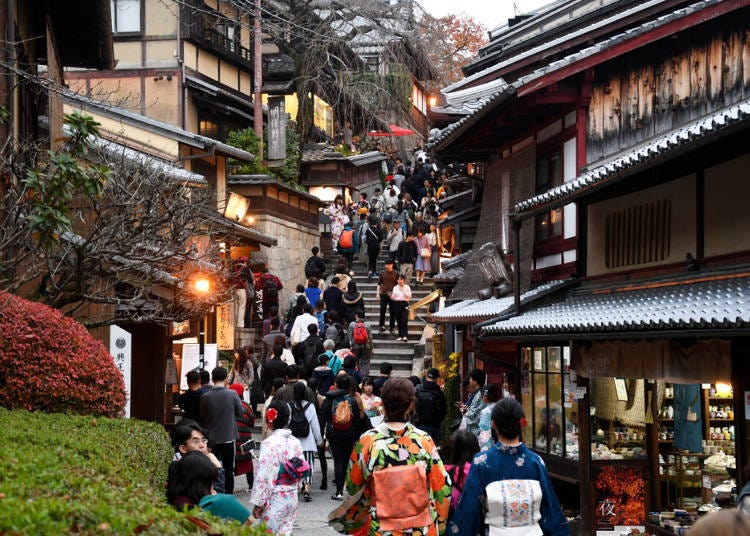 When visiting tourist attractions, be mindful not to block the roads by walking in large, spread-out groups or standing in one place for too long. It's also poor etiquette in Japan to talk too loudly. Naturally, you’ll be excited and might want to express that vocally, but please be aware of the people around you and try not to cause trouble with loud noises.

Another thing to be mindful of are the lines that form at tourist facilities. Japanese people are generally neat and orderly, and cutting in line is a strict taboo. Doing so can lead to misunderstandings and quarrels, so to avoid ruining your trip, please make sure to check where lines begin and end before accidentally standing in the wrong spot.

Gion was originally a very high-class place. There are even some shops that you cannot enter without a proper invitation. Maiko and geiko kimonos are also very expensive. Kyo-Yuzen kimono and Nishijin-ori woven belts are crafted with the best of techniques, and so high-quality that the women who wear them are sometimes called "walking crafts." Whatever you do, never touch or pull them, even casually!

3. “Be Respectful!” Visiting Shrines and Temples 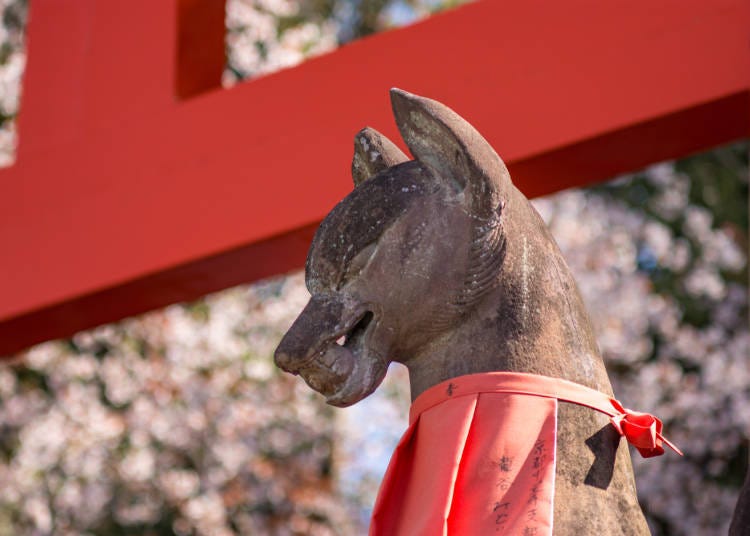 Shinto shrines and temples are so photogenic, most people can't help but want to take a photo. However, remember that these are not sightseeing spots, but important places of worship that Japanese people have long since revered.

It is taboo to directly photograph figures of deities and of Buddha. There are also places that are not open to the public and where photography is prohibited, so look out for signs or notices. Finally, be sure to take off your shoes when entering a temple. It is strictly forbidden to wear outdoor footwear on the tatami mats.

The popular Senbon Torii of Fushimi Inari Shrine has QR codes installed at nine locations around the precincts where you can listen to audio guidance in Japanese, English, Chinese, and Korean, that explain shrine etiquette. So there is no excuse not to mind your manners!

4. “Are You Gonna Eat That?” Etiquette in Japan for Dining at Restaurants 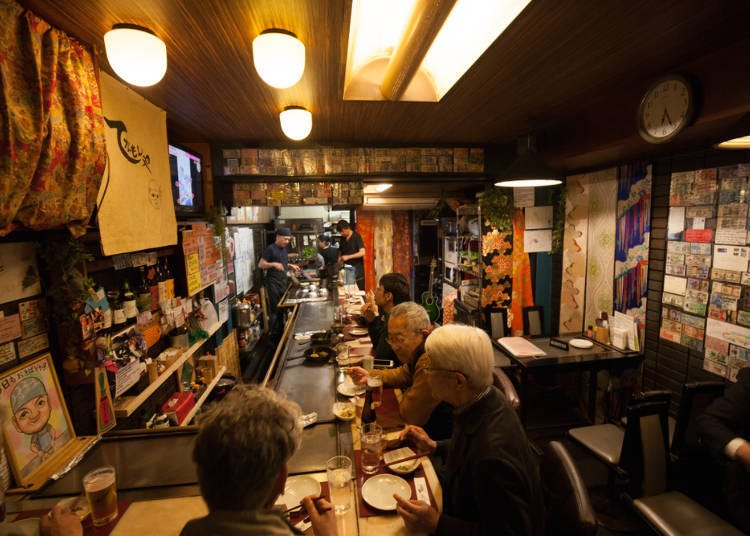 Next, let's learn etiquette in Japan for restaurants. Popular shops tend to generate long lines, so first, make sure to confirm where it begins and ends so you can line up properly.

Also, anyone who occupies a seat in any restaurant is required to order at least one dish as a basic rule. Not ordering the equivalent number of dishes to people in your party, and bringing food from outside, are strictly forbidden.

Also, it may be fun to eat to your heart's content at an all-you-can-eat buffet, but it is considered bad manners to leave food behind.

In Japan, people say "Itadakimasu" before eating and "Gochisosama" when finished to show gratitude and appreciation for both the food and the people who prepare the meals. So in order to show that thanks and to avoid wasting food, please refrain from taking more food than you are sure you can eat at one time.

Reservations are generally confirmed as soon as you call, and then the shop reserves your seats and the ingredients to be used for reserved guests. Sudden cancellations cause a huge inconvenience for any establishment, so please try to avoid canceling without prior notification as much as possible.

Finally, Japanese izakayas have what is called "otoshi" or "tsukidashi," which are small, individual dishes served at about 300-500 yen per person. These are automatically served and charged, similar to paying a table fee. It is also a consideration for the customers while they wait for their orders.

5. “So Many Buttons?!” Using Public Toilets in Japan 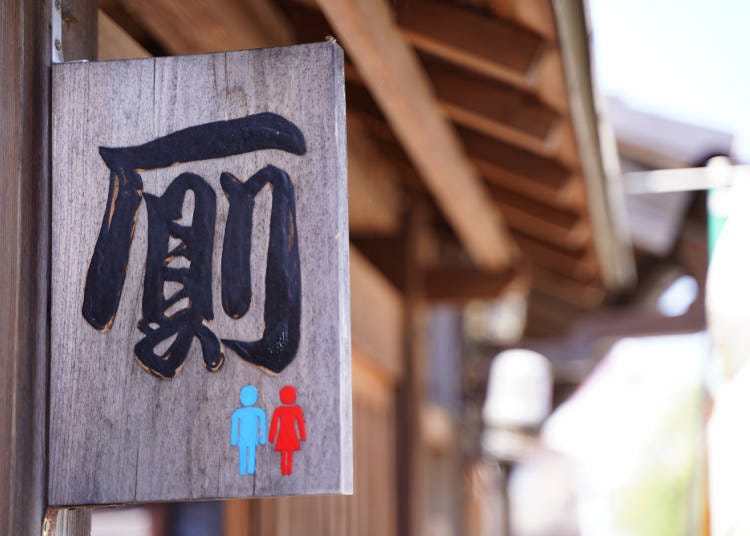 It is considered proper toilet etiquette in Japan to flush the paper when using toilets. In some countries it is customary to discard toilet paper in trash bins, but this is usually due to the scarcity of water in the mountains, or inadequate sewage systems and toilet paper quality.

However, Japan's sewage facilities are well-maintained, so flushing paper down the drain is no problem. Also, throwing used toilet paper into the trash can is unsanitary and can cause odors, so please make sure to flush all papers used down the drain.

Finally, you may be confused by all the fancy functions on some Japanese toilets. There are two types of toilets, Japanese and Western, and some have additional functions such as automatic flushing and a bidet function to wash the buttocks.

Kyoto City provides instructional drawings and stickers in public restrooms showing correct usage in multiple languages for tourists, so when in doubt, please refer to them! 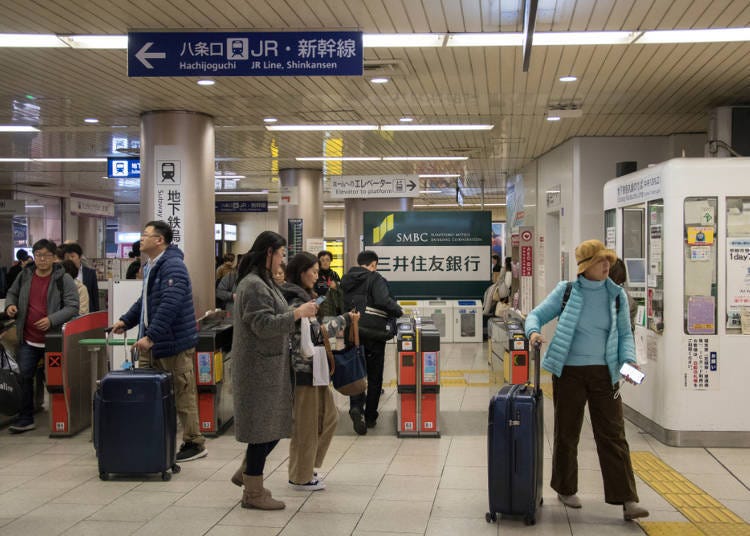 It's not uncommon to see people sightseeing with large bags in hand, however they can be difficult to roll along the cobblestone roads and narrow streets, and can also cause noise disturbance.

Your luggage may be too large to ride a normal taxi, let alone enjoy sightseeing at places like shrines and temples in Kyoto, especially those with many stairs. And bringing them into crowded city buses and subways can be a nightmare.

In the Kansai Region, including in Kyoto, Japan is promoting “hand-free sightseeing,” which involves using delivery services to send luggage to accommodation facilities and airports during your travels.

There are coin lockers at stations and luggage storage available at hotels, as well as multilingual baggage services at JR Kyoto Station that provide temporary luggage storage and delivery to hotels.

Kyoto City is raising awareness of and accessibility to multilingual support for foreign tourists, both on websites and around the city, in preparation for all the visitors they plan to welcome during the 2020 Olympic and Paralympic Games. They are also installing additional signboards and flyers in other languages.

There is a saying, "When in Rome, do as the Romans do." This is smart advice to follow, and a good way to adapt to the local environment, regardless of differences from your own culture. By understanding Japanese culture and etiquette, you can enjoy sightseeing around Kyoto even more.