HOME Kansai Hyogo Kobe, Sannomiya, Kitano What is Sake Anyway?! Checking Out How 'The Best' Sake is Made at Kiku Masamune Sake Brewery 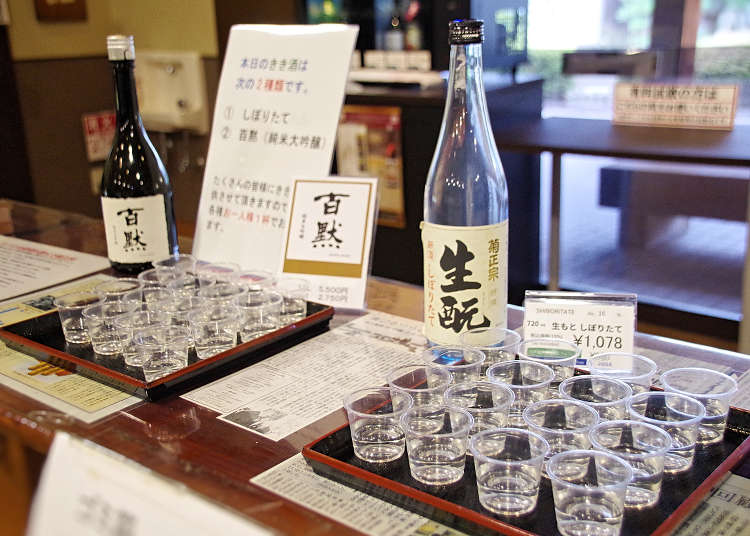 What is Sake Anyway?! Checking Out How 'The Best' Sake is Made at Kiku Masamune Sake Brewery

Nada-Gogo, located in Kobe City, Hyogo Prefecture, is often said to be the best place for sake in Japan. It is a popular tourist attraction with over a dozen breweries where sake lovers can visit and sample some of the best. 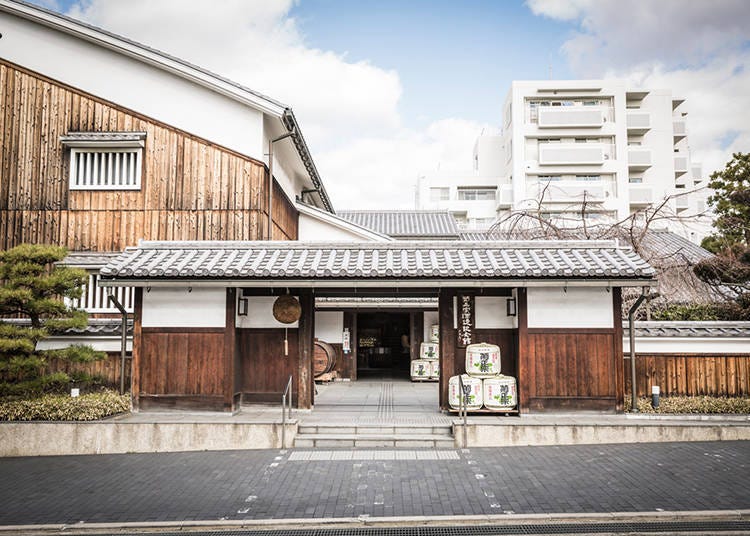 What Kind of Place is Nada-Gogo? Why is their Sake Best in Japan?

Nada-Gogo is popularly known as "the best place for sake in Japan." It is located in an area called Hanshinkan, between Kobe and Nishinomiya City in Hyogo Prefecture. Nada-Gogo is the collective term for the Five Villages of the Nada Area. Starting from the center of Kobe City to the east, they are called: Nishi-go, Mikage-go, Uozaki-go, Nishinomiya-go, and Imazu-go.

It is said that this is the area where sake brewing began almost 700 years ago. Craftsmen have been actively brewing sake here since the early Edo Period (around 1624-43). Nada has since gained fame thanks to the many improvements in rice-polishing technology made there, the discovery of Miyamizu, a special kind of water used for sake, and the advanced brewing techniques of skilled sake artisans known as the "Tamba Toji." Later in the Edo Period (around 1800), Nada accounted for 80% of the sake consumed in Edo (now Tokyo). 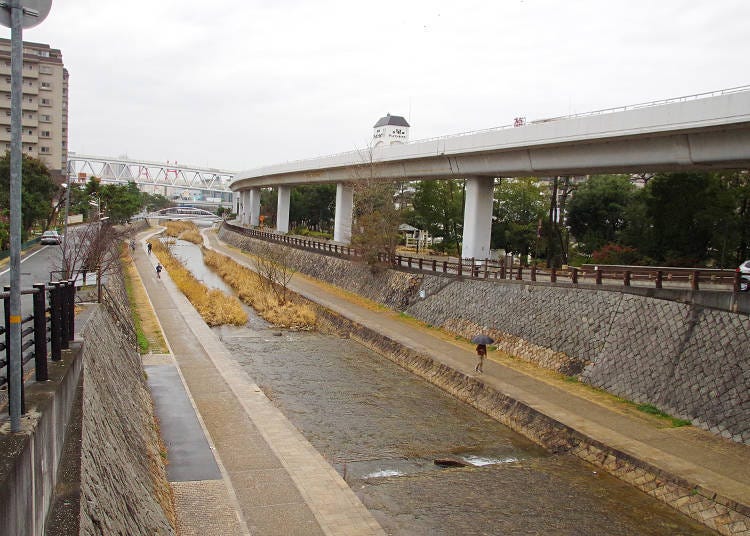 Upstream along the Sumiyoshi River is a water wheel used for polishing rice. Pictured on the right is the Rokko Liner.

Nada-Gogo is situated along the Hanshin Railway Line. To get to Kiku Masamune Sake Brewery Memorial Hall, ride the Hanshin Line to Uozaki Station, located between Mikage and Uozaki. From there, walk south along the Sumiyoshi River for about 10 minutes. The closest station is the Rokko Liner Minami-Uozaki Station. It is about a 4-minute walk north. A useful tip: in Kobe, direction is often determined by the scenery. The south is referred to as "sea side," and the north is called the "mountain side." 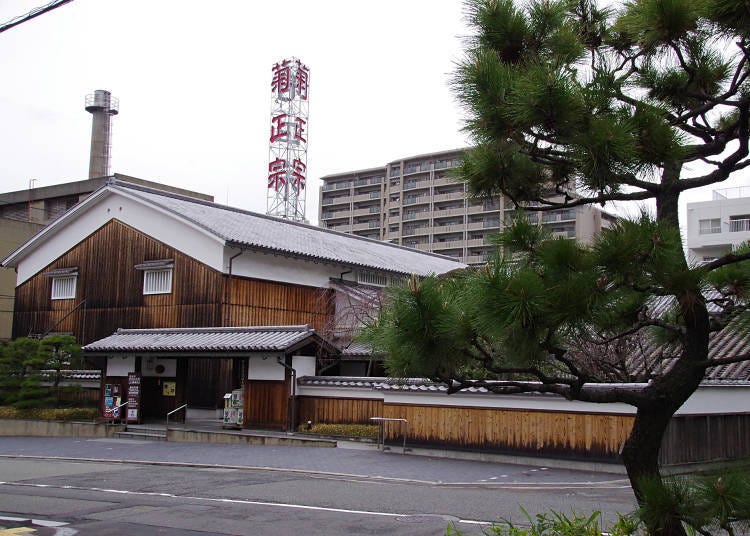 Kiku Masamune Sake Brewery moved its storehouse to its current location about 60 years ago, and opened the Sake Brewery Memorial Hall. This hall exhibits sake brewing tools from that time period (designated as Important Tangible Folk Cultural Properties of Japan). The building was completely destroyed by the Great Hanshin-Awaji Earthquake of January 17, 1995, but four years later in 1999 was rebuilt as the current Kiku Masamune Sake Brewery. There are about 566 brewery tools that have been re-designated as Important Tangible Folk Cultural Properties, with almost all the tools on display in the museum designated as such.

Kiku Masamune Sake Brewery Memorial Hall attracts about 140,000 visitors annually, and about half are tourists from overseas. Pamphlets and exhibitions are available in eight languages, including English, Chinese, and Korean. You can even hear guided audio by using a QR code. 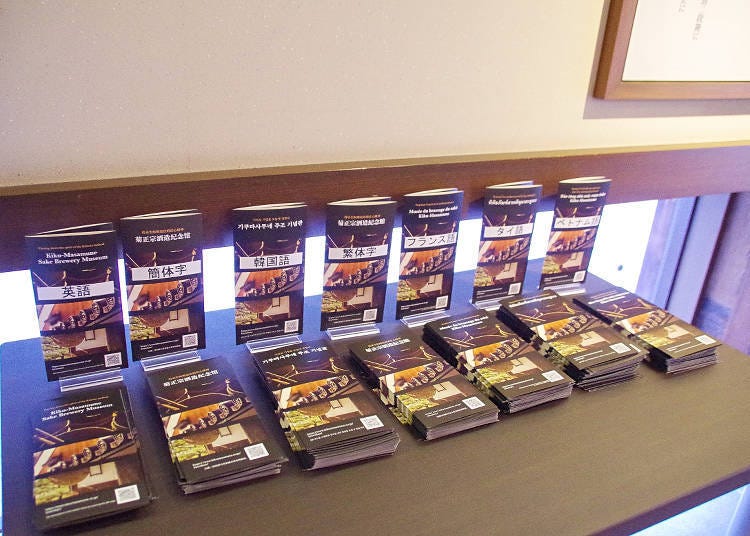 Let's check out the tour route in the memorial hall. First, participants are shown a 10-minute DVD about "kimoto," the sake-brewing process used at Kiku Masamune. This traditional brewing method uses the time-saving power of natural lactic acid bacteria. This was considered a secret skill of the trade that relied on the intuition and experience of the craftsmen, kept from outsiders and passed down from craftsmen to their children. 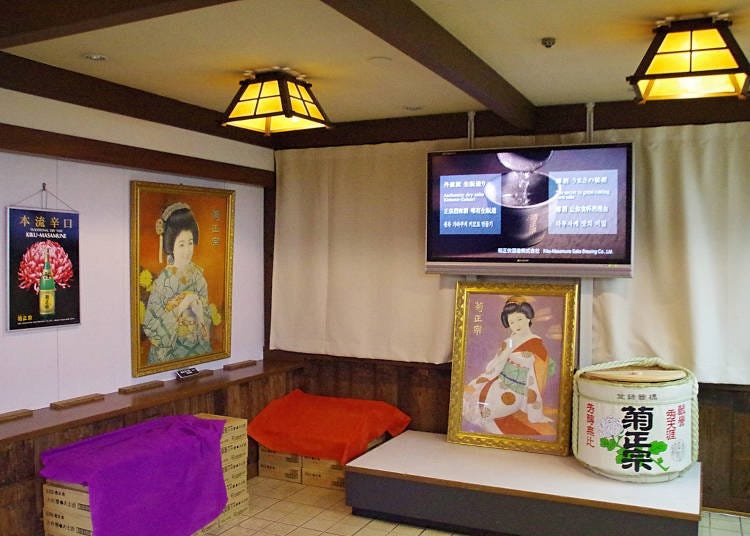 You can watch the DVD in foreign languages, as well

Next, we're heading to the sake brewery exhibition room. This exhibition explains the challenges and processes of sake brewing 180 years ago, before production was mechanized. Almost all of the tools on display are Important Cultural Properties that were actually used by craftsmen. It takes about 20 minutes to get through all the displays of the exhibition room. 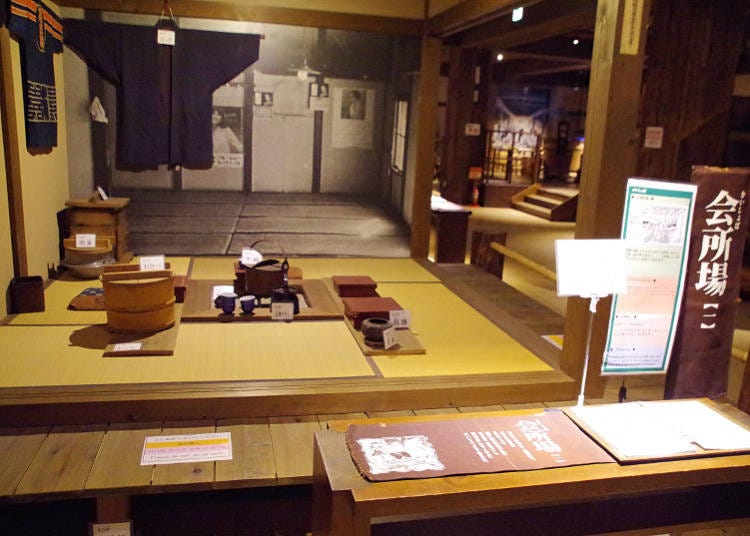 The Kaishoba is a room where about 20 people, including the toji, slept and ate together. 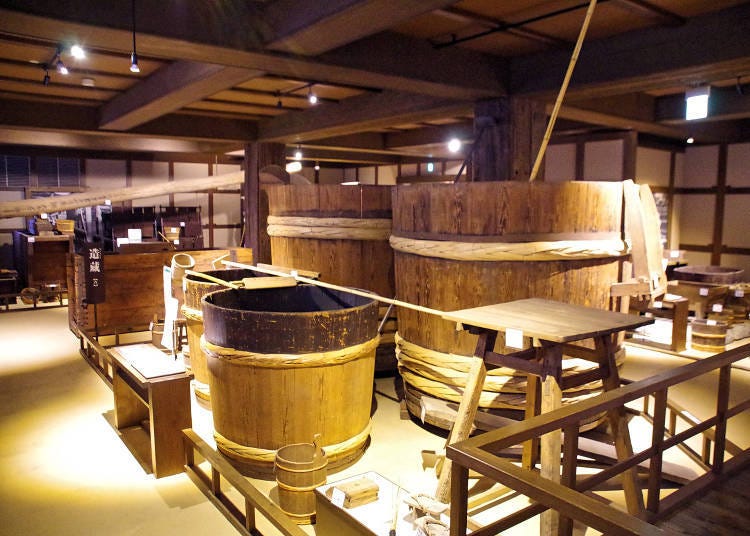 The amount of sake you could make at one time was about 50 koku (9,000 liters). This process was repeated about 20 times during the three months of winter. The tub on display was surprisingly large. 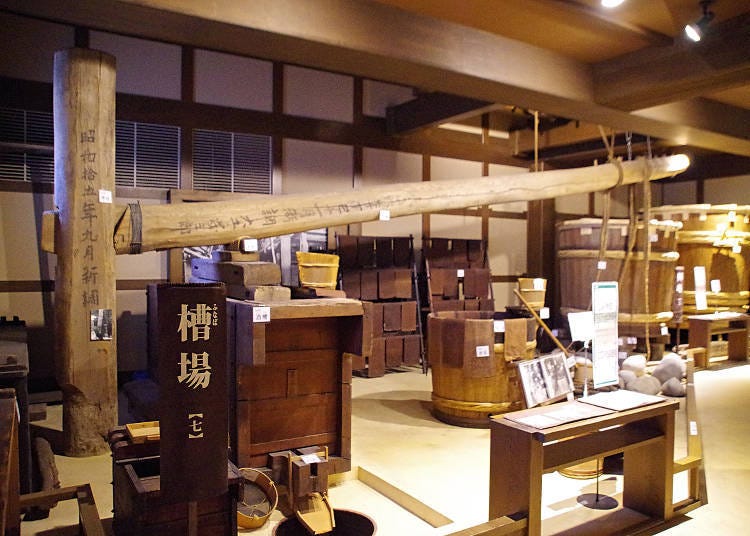 The equipment used for pressing after fermentation.

The Taruzake Meister Factory: another must-see! 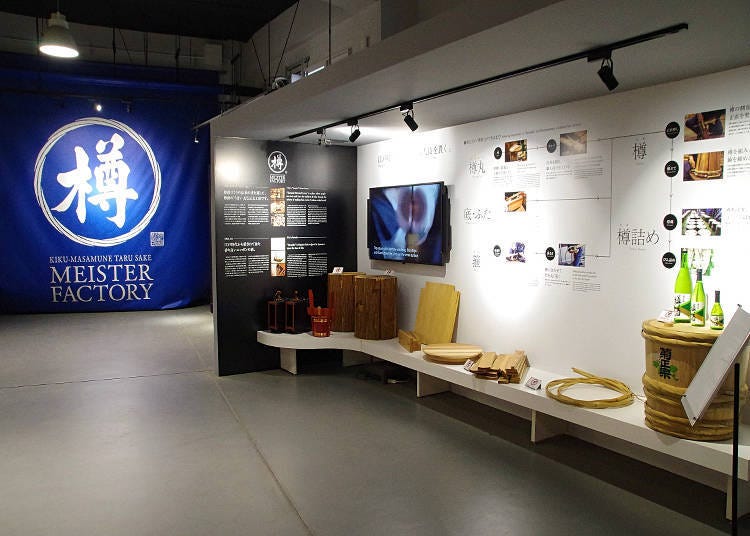 The "sakadaru," or wooden sake barrels, are important items once used for storing sake. Sakadaru barrels are still used at Kiku Masamune Sake Brewery, and accounts for 75% of the sales of bottled "taruzake"(sake aged in sakadaru barrels for a period of time) sold in Japan. 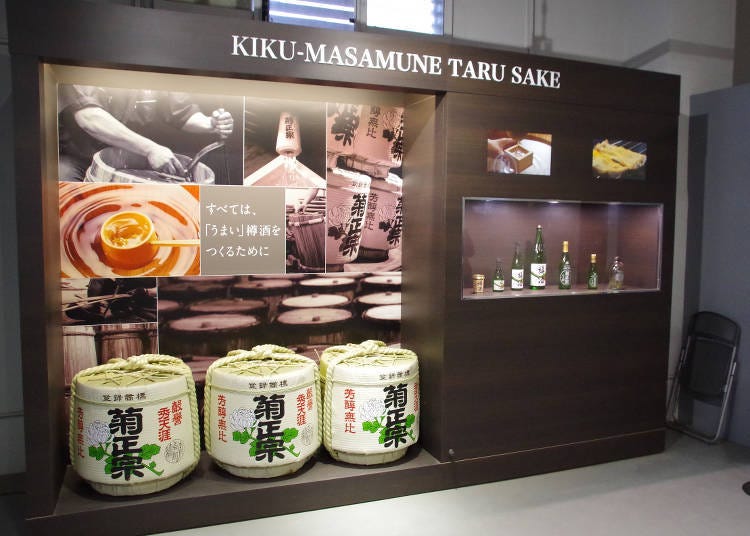 Sakadaru barrels with the Kiku Masamune name written on them

Sakadaru barrels are used to enhance the flavor of the sake. The aroma of the 100-year-old Yoshino cedar trees used to craft the barrels is said to make the sake even more delicious. Sakadaru barrels were originally used to store sake in the Edo Period to transport them to Edo. However, people eventually realized that once they had arrived, the sake had somehow become even more delicious in the time it took to transport them.

However, with a shortage of successors and difficulty securing raw materials, sakadaru-making is currently facing a critical situation. So in 2017, Kiku Masamune Sake Brewery opened the Taruzake Meister Factory, and hired skilled barrel craftsmen as a place to train successors and continue the traditions of taruzake sake. Right next to the Kiku Masamune Sake Brewery Memorial Hall, you can see sakadaru barrels that are actually made and used at Taruzake Meister Factory. Tour times and capacity (20 people) are limited, so we recommend making reservations in advance. 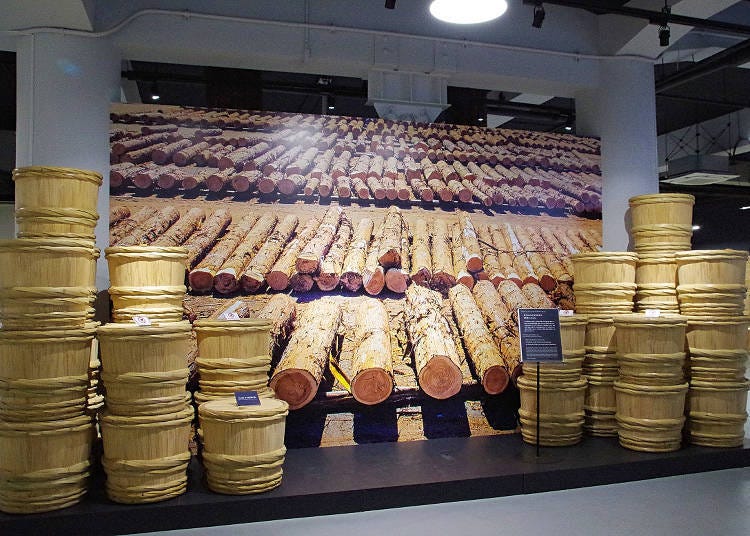 Taruzake Meister Factory is more than just a museum... it's an actual workshop!

The barrel-making technology used is quite note-worthy. Nails and adhesives are not used in order to not compromise the aroma. While this is not necessarily a work place, you can still observe the unchanging craftsmanship from the Edo Period, such as "takewari", "tagamaki", and "tarukumi," which are special barrel-making methods. You can smell the scent of wood drifting throughout the workshop, and hear the sounds of bamboo bending and wood-working. There is a certain beauty and strength seen in the hard work of the craftsmen. And after your visit, you will not be able to leave without a taste of sake. 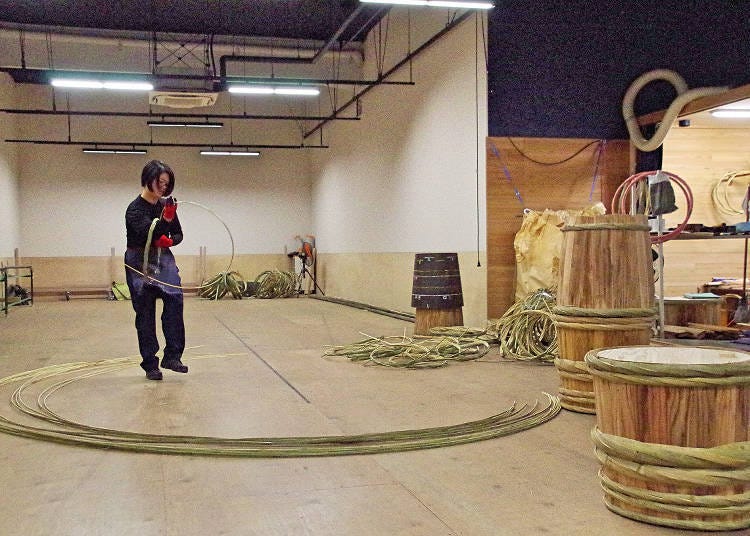 Tagamaki: Bending the bamboo to make the "taga," or "hoops," that hold the barrel together. 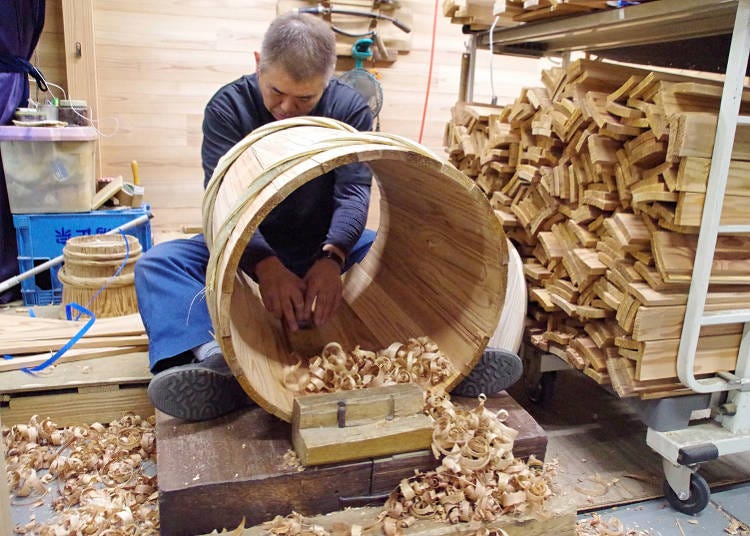 Tarukumi: Putting together the Yoshino cedar materials and shaving the inside to assemble the barrel 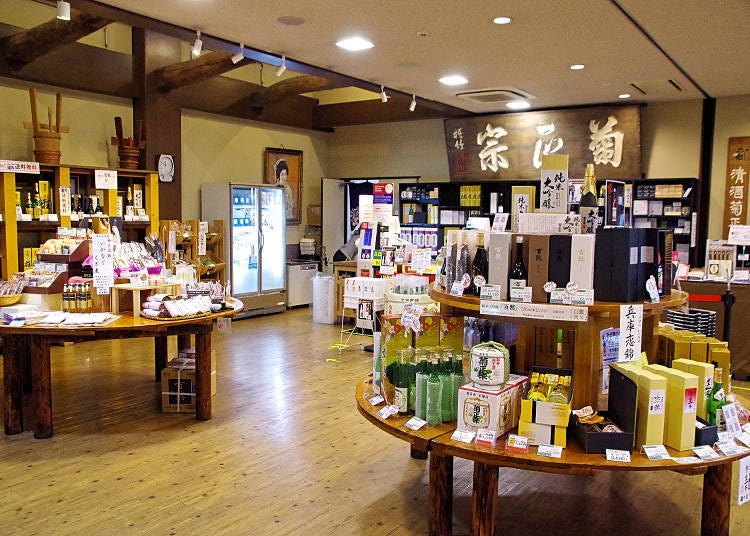 The shop sells Kiku Masamune Sake Brewery products, including sake, plum wine, products made with sake lees, and snacks to enjoy with your sake. At the free tasting corner, you can sample 2-3 types of Kiku Masamune's classic products. 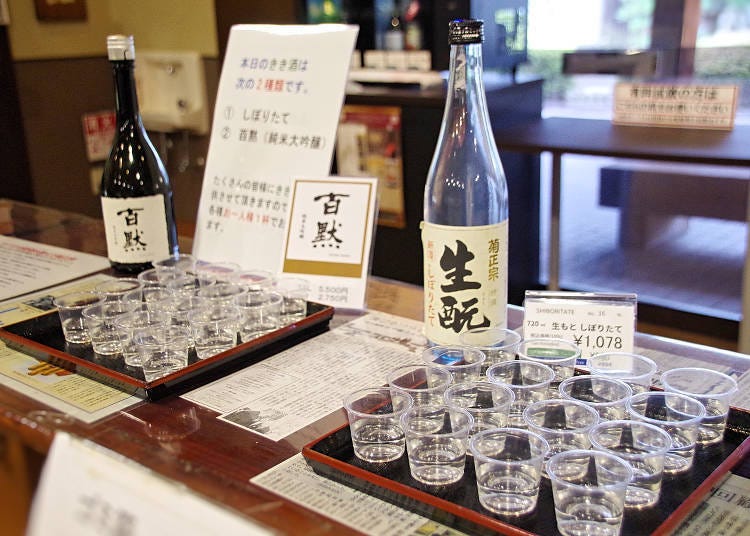 There are also six extra tastings you can purchase. For 500 yen, you will get a coin that you can exchange for one sake cup that can be used for up to two sake tastings. Here you can try high-quality daiginjo sake, including barrel sake. 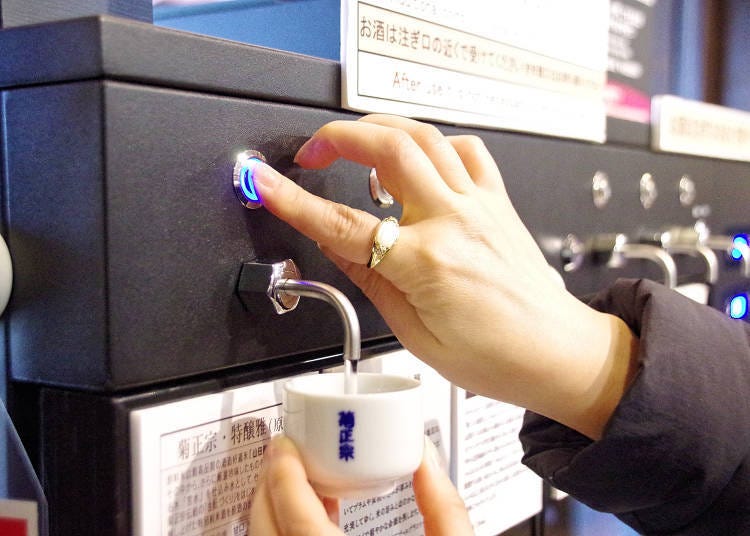 There's also a rich lineup of limited-edition sake and convenient, easy-to-carry small bottles that can only be found here. 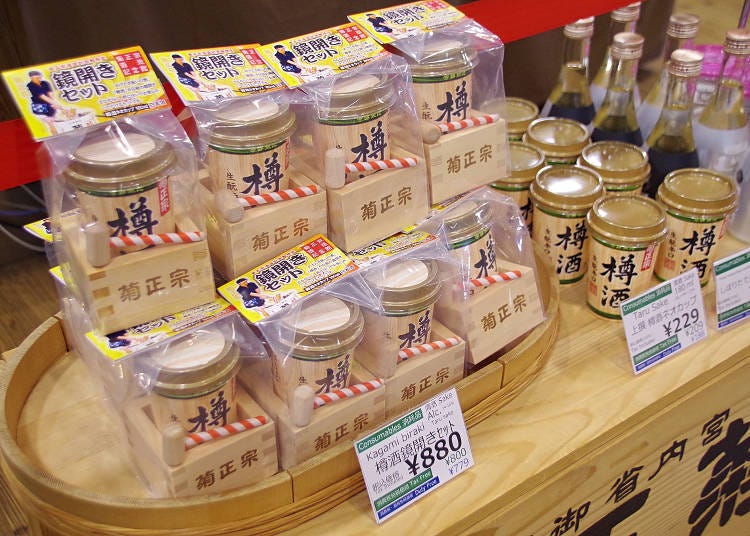 Aside from the sake, cosmetics are also pretty popular. There are lotions that contain the equivalent amount of amino acids found in one 1800 ml bottle of sake, said to be great for bright, clear skin. 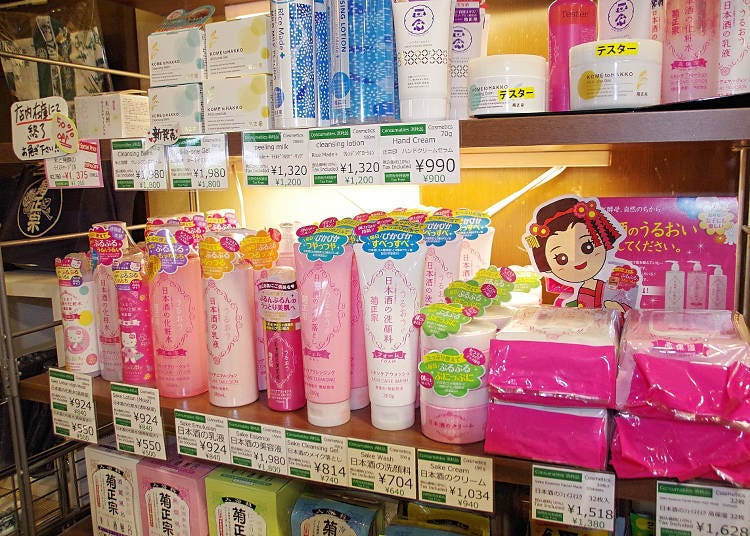 The items at this shop are not only consumption tax exempt but also liquor tax exempt, so foreign visitors can shop without hesitation. The cashier will confirm if your purchase meets the tax exemption base price. Payments by Alipay and WeChat are also accepted. 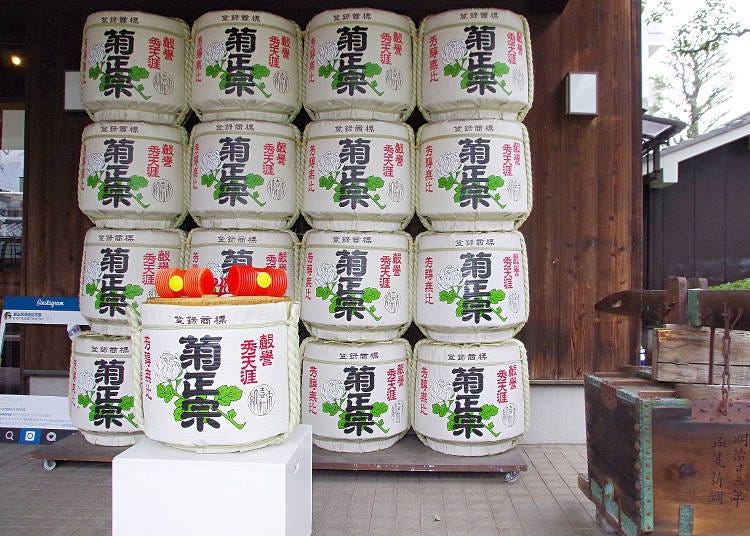 If you want to take a souvenir photo, how about one participating in "kagami-wari" (a barrel-breaking ceremony) in the garden? Of course, you can't actually break the barrels, but it makes for a great photo opp! You can even wear a traditional happi coat

Take a trip to the sake breweries of Kobe's Nada-Gogo, the home of sake culture! 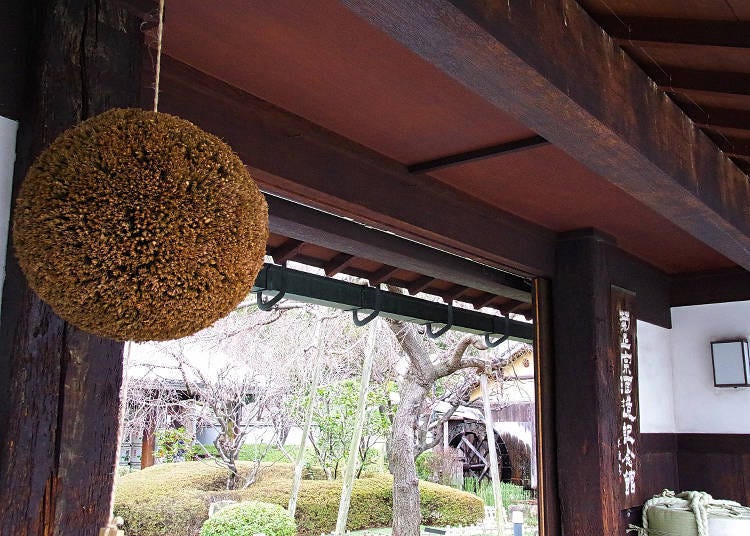 The Kiku-Masamune Sake Brewery Memorial Hall is a great way to learn all about sake, but it's not the only place! There are several other sake breweries in Mikage-go and Uozaki-go, near Hanshin Line Uozaki Station. In addition to elaborate displays and tastings, some sake breweries also have restaurants and cafes. 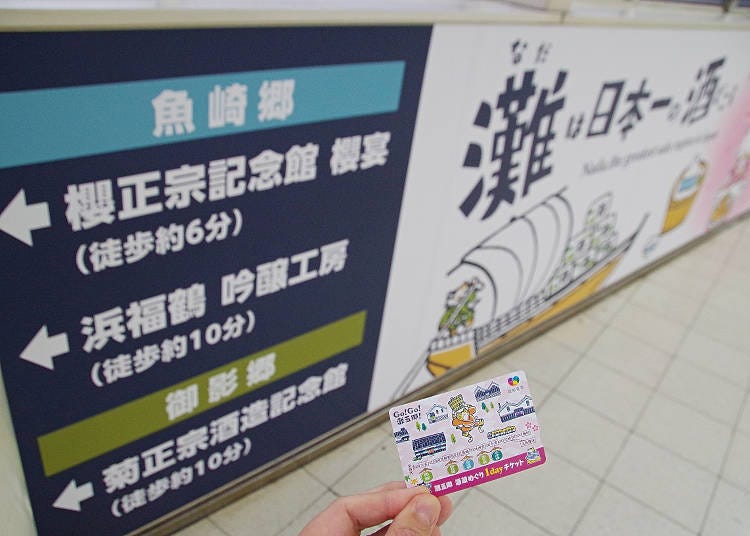 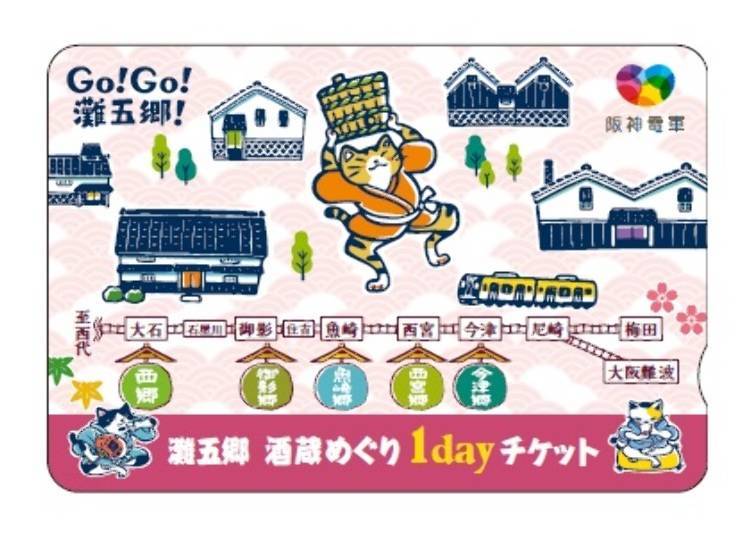 If you want to visit other towns as well, you can purchase a Hanshin Railway 1-day Ticket for unlimited rides on the lines servicing the entire Nada-Gogo Sake Brewery area (*For foreign languages, click here: https://www.kansai360.net/m/zh-tw/ticket02.html). Just think about how many kinds of sake you can try by visiting all the sake breweries! It is sure to be a memorable trip for lovers of sake everywhere!

The traditions, culture, and craftsmanship of Japan is reflected in each and every drop of sake. Take a trip to Nada, and immerse yourself in the world of the best sake in Japan.